Skilled creatives, the Moche civilization left behind artistry that allowed future generations a glimpse into their enigmatic society.

The Moche culture remains one of the most mysterious unknowns of Peruvian history, and with the more prominent Incas filling up most of the pages in the history books, the Moches do not receive as much attention.

All researchers can glean from the Moche civilization is through a collection of artistic masterpieces from archaeological digs, writings from Spanish invaders (the Moche did not use a predominant written language), and other fragments left behind in Peru’s northern coastal regions.

The Moche civilization lived and flourished along the northern coast of Peru from the 1st to the 8th century A.D., with their highest concentration of residents in the popular Trujillo region and Chicama valley. Due to the riches of this land, which included access to sturdy clay and precious metals, the Moche civilization accumulated significant wealth and power during this pre-Incan period.

At the foot of the Cerra Blanca Mountain, Moche’s capital city covered 300 hectares of an opulent environment that offered residents a tight community of people, storehouses, open plazas, and ramps for easy entree to multiple-level structures. The upper elite also planned fields surrounding the city (indicating a class-based society). Building this capital took the Moches 600 years to complete and involved no fewer than six construction phases. 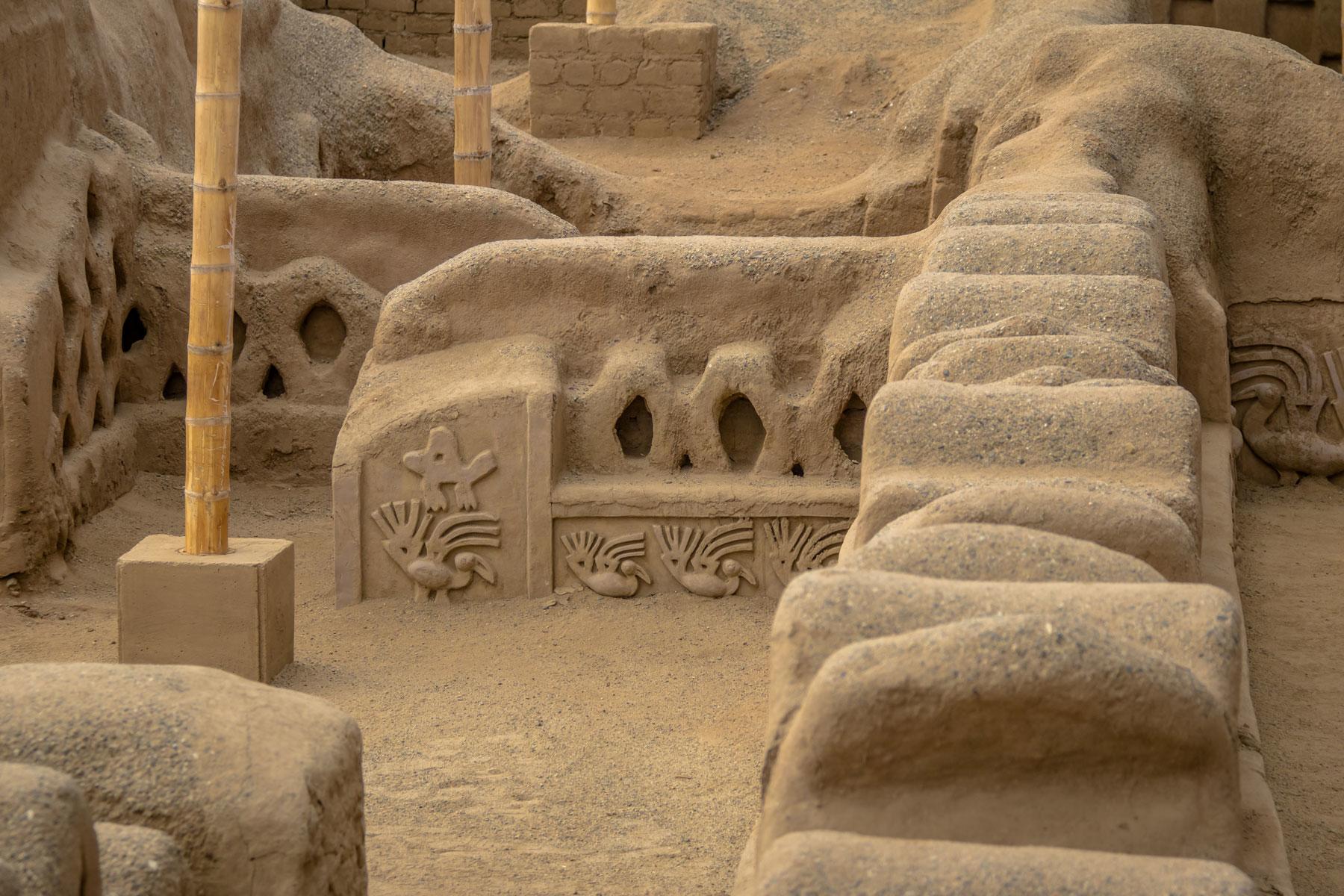 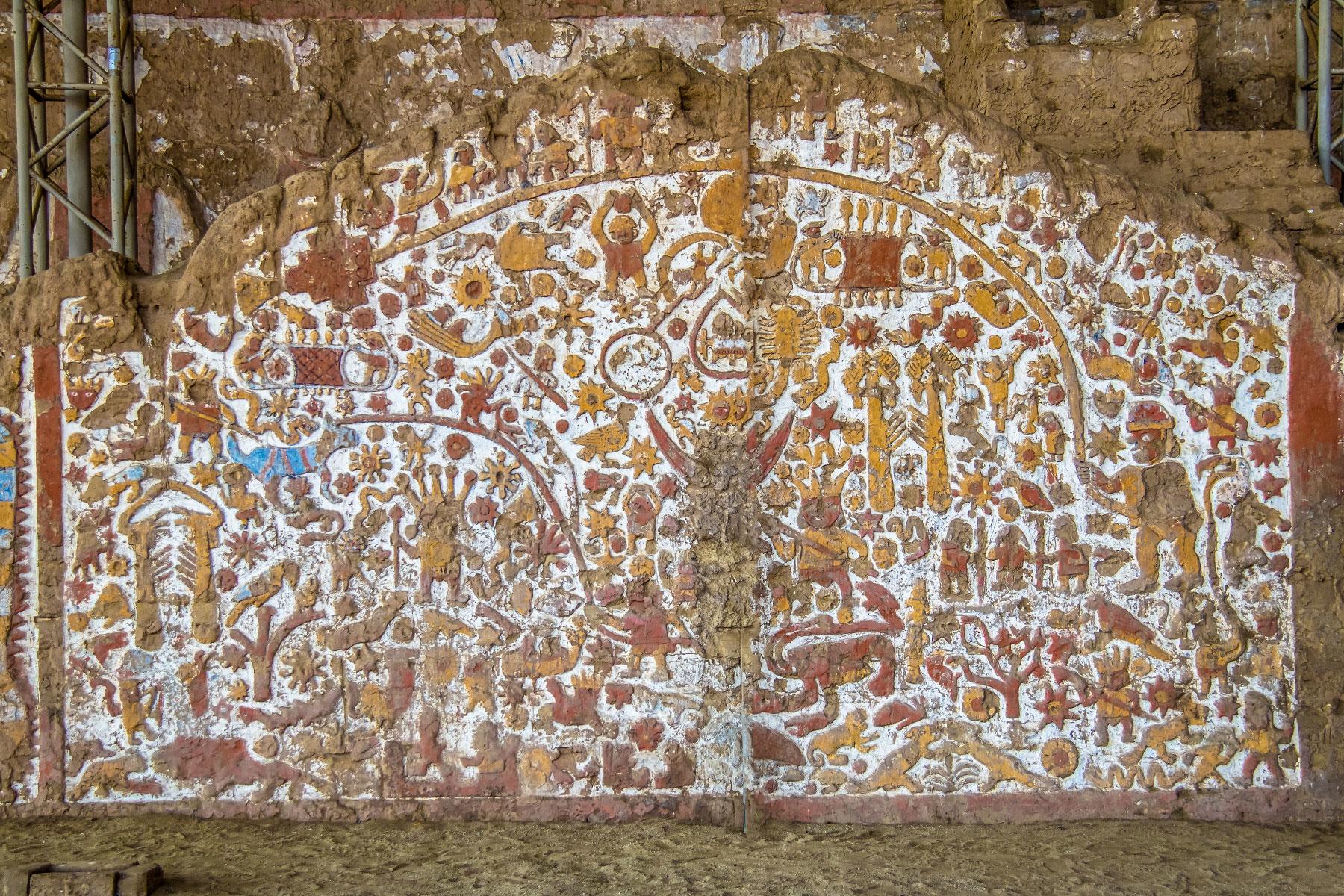 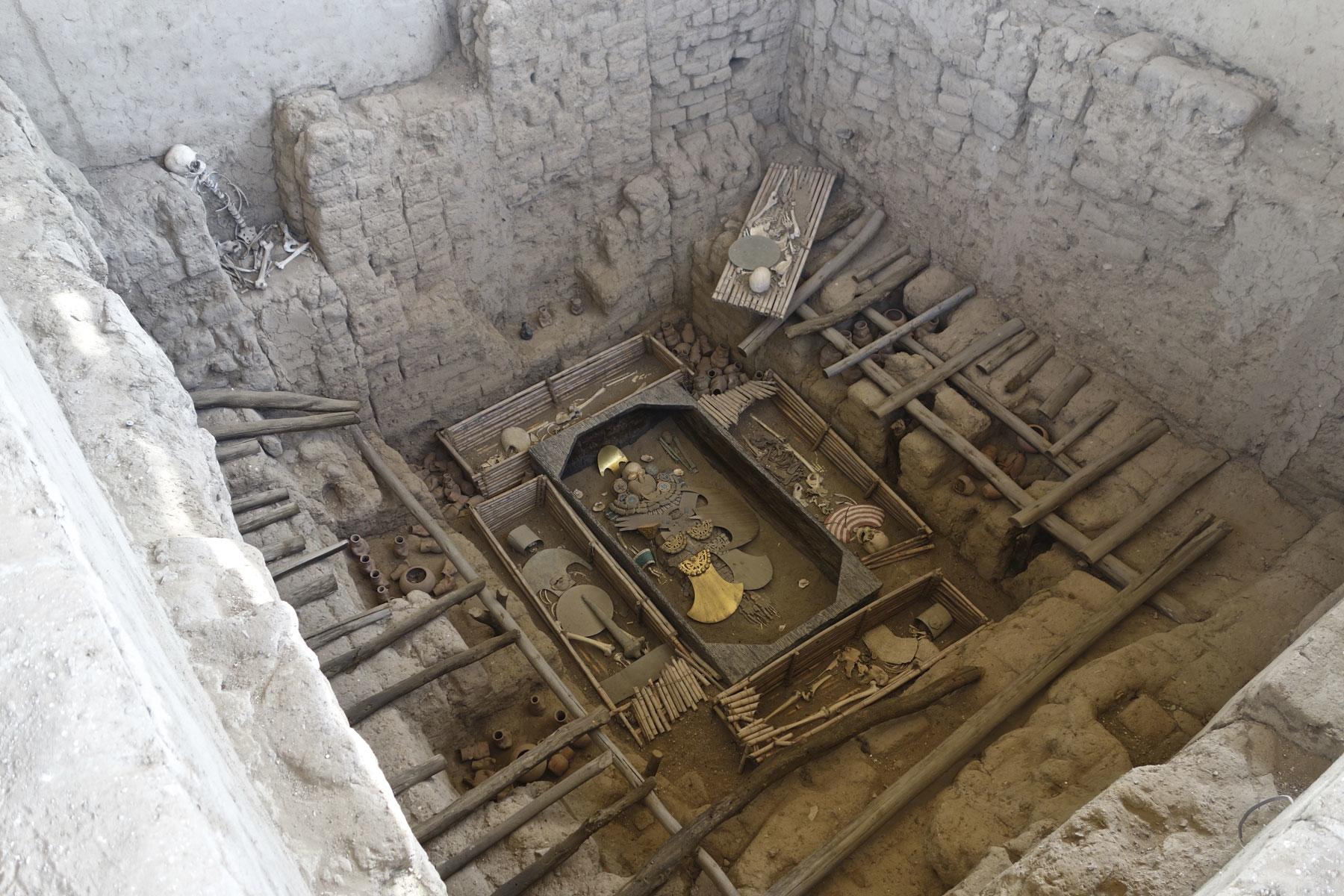 In addition, the capital included two now-famous pyramids often open to tourists today: the Huaca Del Sol (Temple of the Sun), a structure standing more than 50 meters in height and encompassing an area of 340 by 160 meters, and the Huaca De La Luna (Temple of the Moon), built using millions of adobe bricks. Researchers believed both were used as prodigious religious tombs.

INSIDER TIPAfter the Moche civilization fell, societies started burying the deceased in the sitting position rather than in the previous traditional position of lying down.

Researchers believe most of the early Moche architecture were palaces that included sacred burial places, brightly colored exterior murals, and interior decorations. Also, the Moche did not appear to construct new palaces from scratch, rather, they simply remodeled what already existed. 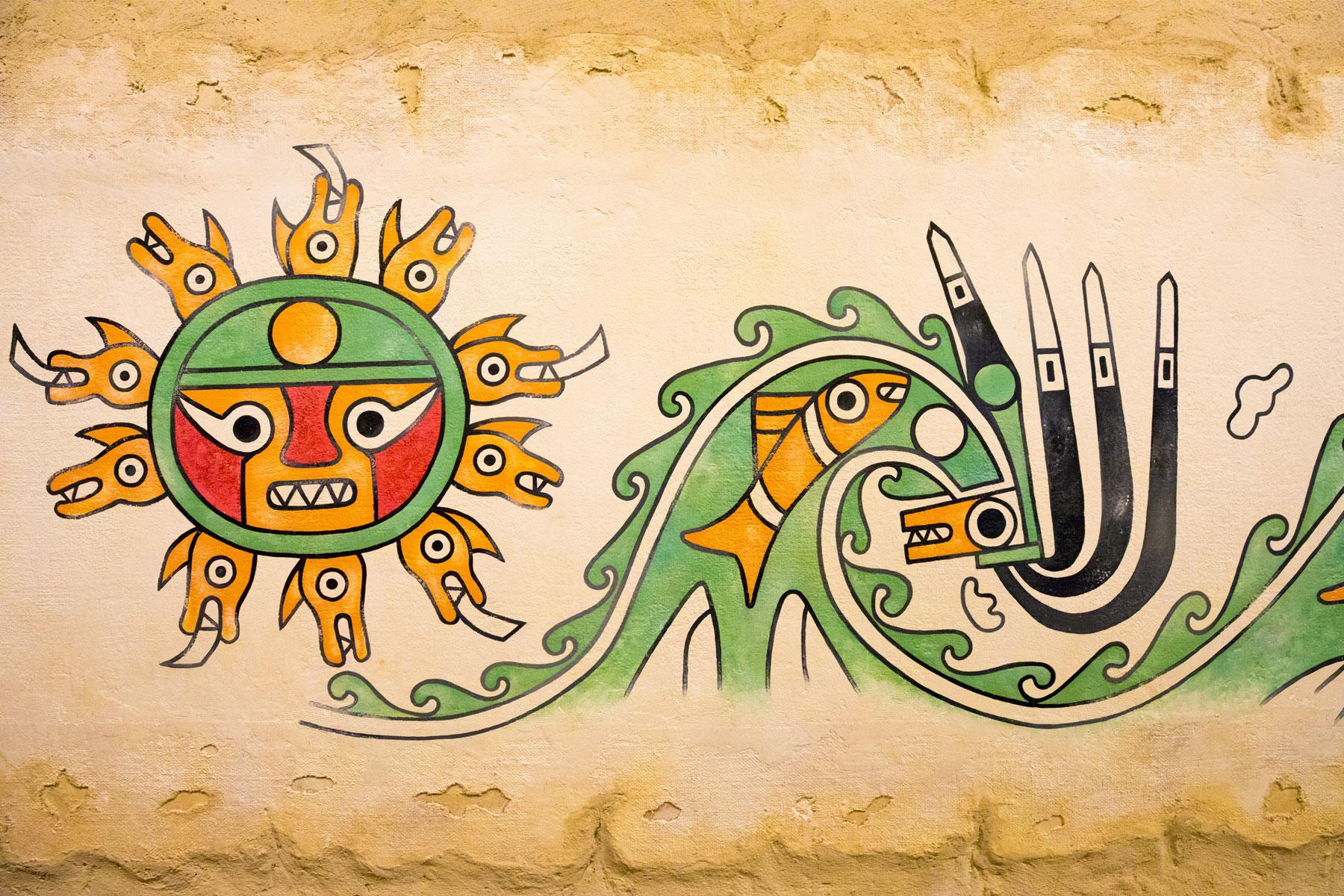 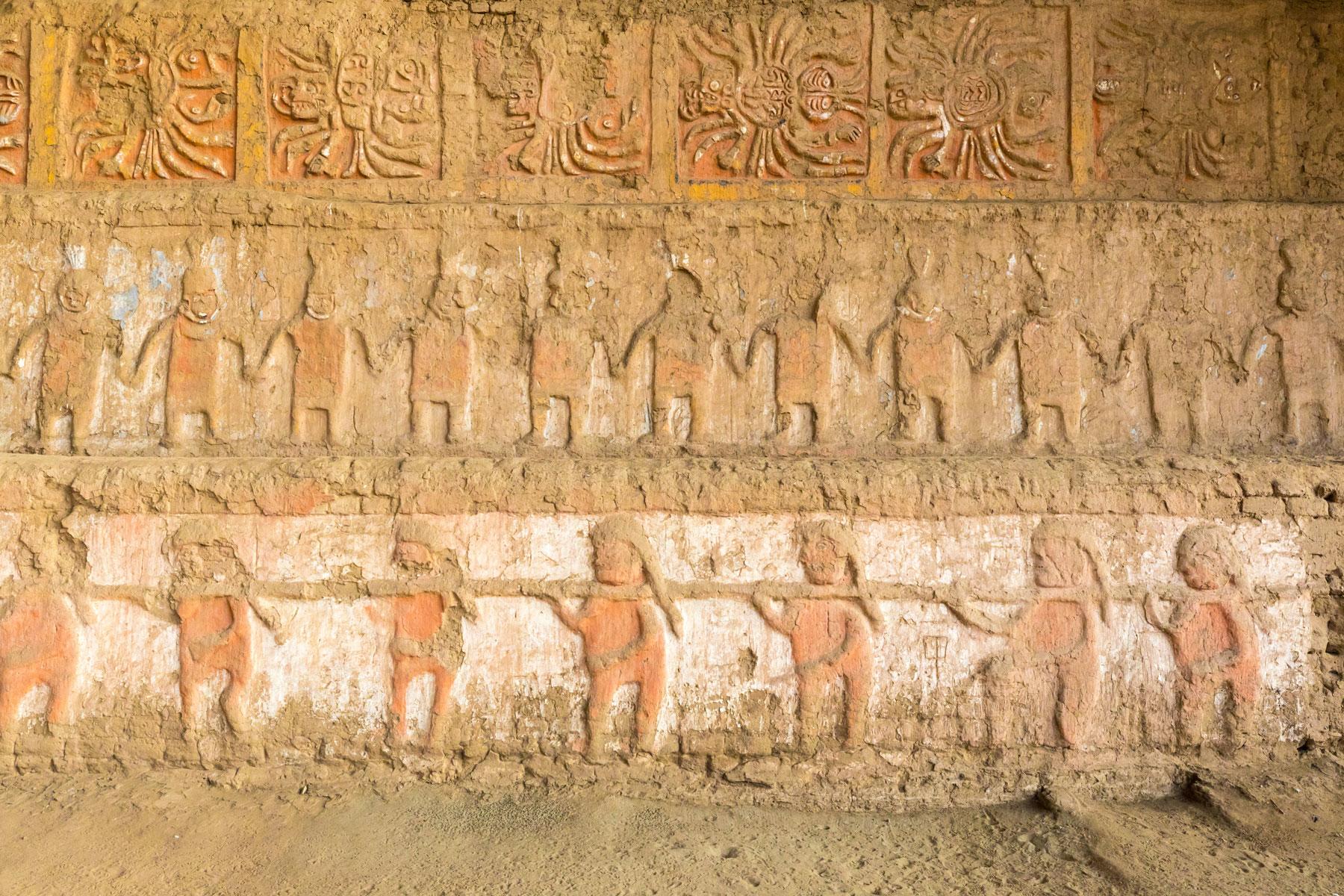 Leaders also created complex agricultural and irrigation systems by getting a handle on seasonal flooding. Researchers found raised platforms within these agricultural fields, suggesting that supervisors watched over workers. They also think that each individual Moche resident, both upper and lower class, needed to farm the fields, as this chore was probably a way for everyone to pay taxes.

The Moche Valley also included compounds of approximately 200- to 950-square meters of plazas, but lower-class people were restricted entry to them. However, other compounds were assembled strictly for the lesser class, but they did not offer storerooms, burial sites, or even areas considered habitable.

Although monuments and temples remain for archeologists to research today, most of the tangible objects left behind by the Moches were artistic, creative artifacts full of intricate designs and pops of bold colors. Considered skillful metalworkers and adept potters, the Moches produced sophisticated headdresses made of real gold for their goddesses, jewelry of valuable metals, chest plates to show prestige, textiles for ornamentation and wardrobe, utensils for eating, and tools for working in the fields.

Their pottery always included extensive decorations, and they painted each piece with depictions of their daily life, animals, and war. As their civilization grew more progressive, so did their artwork, and the paintings on each pottery piece became more comprehensive and included finer strokes. This allows researchers to differentiate between early- and later-civilization Moche artistry.

In addition, wall murals and metals included adornments and lively paintings, some of which withstood the elements over time and we can see them in museums today.

In 700 A.D., the Moches moved their capital city to Pampa Grande in the Lambayeque Valley, approximately 40 miles from the Pacific Ocean. They constructed this city to include large pyramids and temples made of dirt using a method called chamber and fill, which allowed loose dirt to clump into cribbed walls.

No one knows exactly why the Moche civilization eventually disappeared. Many researchers believe El Niňo caused substantial damage to the fields and irrigations systems, as they found confirmation of flooding at every single ceremonial site. (The chamber and fill approach appeared to hurt them significantly.) Archeologists also think the Moches abandoned Pampa Grande quickly and as they left, set their city on fire—but why? Again, we are left without answers. And so, the Moches remain one of the most perplexing civilizations in Peruvian history.