They claimed, "the dolphins keep the piranhas away."

Silvery threads of river sparked and shone through the jungle canopy. As our plane drew closer to Iquitos, Peru, the rivers widened, seemingly escaping the confines of the trees. My destination was somewhere down there, where the rivers formed the Amazon.

The first glimpse of our ship—Delphin III, a name tied to the pink river dolphins local to the area—nosed into the muddy riverbank. This pocket of Peru, known to be remote, is where rivers serve as highways, and boats clamber down the water like cars during rush hour. As our ship pushed ahead, long, narrow skiffs loaded with bales and bundles floated past, fighting or flowing with the current.

After settling into my room, I found the lounge ordered a Chilcano (a type of Peruvian brandy) in a delicious-but-futile effort to erase the day’s humidity. A second glass helped more and, as I debated a third Chilcano, our ship began its tug-of-war with the grasping mud. The engines groaned, strained, and soon we were free.

Underway now, waiters circulated with drinks for a welcome toast as our head naturalist, Renni, silenced the crowd with a raised glass. Welcoming us in Spanish and English, he told us we were racing the sunset, trying to reach the confluence of the Maranon and Ucayali Rivers—the birthplace of the Amazon—before nightfall. By the time I finished my drink, he announced we had arrived.

Loading onto a pair of twin-engine skiffs, we left the ship behind and skimmed over the red-brown water to an island in the center of the river. Here, the red waters of the Maranon and the earthen flow from the Ucayali met, mingled, and made the Amazon. Pisco sours appeared alongside a snack of fruits and nuts wrapped in banana leaves. We toasted to the Amazon and to ourselves for being here, just as the sun began to set and the sky filled with birds.

Heady on Pisco, I looked at the river and stretched my hand toward it. I grew up on horror movies, and I knew—thanks to many viewings of Piranha—that those fierce little filets with their notoriously sharp teeth lurked just below the surface. I imagined they were waiting to leap free of the river and shred my hand to the bone, leaving me just enough time to raise my skeletal fingers as if summoning a school of the flesh-hungry beasts to finish the job. Someone would have to pack up my things and send them to my wife. Maybe she could bury my notebook as my bones belonged now to the river.

I drew my hand back and turned my attention to the setting sun and the pandemonium of parrots streaming in, their bodies colored scarlet, yellow, and purple, as if the sun itself was setting piece by piece.

The next day we began exploring in earnest with a jungle hike. Here, the jungle is home to poison frogs, killer centipedes, snakes, spiders, and quicksand—you know, all the things you’d expect to find if you Googled “what can kill me in the Amazon.” No one mentioned the Ficus trees, the finicky and ubiquitous houseplants towering 100 feet into the air, or the vines that looked like philodendron with inch-long thorns.

Two minutes down the trail, our local guide left us in Renni’s care and disappeared. When he re-emerged, he held a beautiful frog with a red-back, blue spots, and black legs—a poison dart frog. As we hiked, our guide pointed out animals everywhere. A ribbon of black ants climbing a tree. The complex web of a colony of spiders. Some horrible insect we all let walk across our hands. A boa constrictor that measured 12-feet long. A palm-sized tarantula perched on a leaf. As we approached a clearing with a tree reminiscent of an Indiana Jones adventure, Renni assured us that this was the proverbial tip of the iceberg for our animal encounters. Tomorrow, he promised, we’d have a day unlike any other.

Our guides wrote the day’s schedule on a chalkboard near the dining room, and on the way to breakfast, I was stopped in my tracks. The first item of the day was a boat ride exploration and swim. Swimming?! I pictured Survivor and the season where a team had a crocodile-proof cage to swim in. I pictured the chainmail suits divers wear in Great White shark territory. I pictured dipping my toe in the river to check the temperature and pulling back a bloody nub leftover from the piranhas.

As our skiff pulled away, Renni pointed high into a tree. There, a bundle like a hornet’s nest swayed and stretched out an arm. It was a sloth, the first we’d seen. Monkeys were next, climbing down thick vines to drink cupped hands of river water with their eyes wary and watching. Then we spotted dozens of birds, some bright and some dull. Renni told us their names as he pointed out trees and flowers native to the region. As we explored, Renni shared stories of growing up in the jungle and how his uncle had been cursed by a rival tribe’s shaman, even going so far as to paddle to Colombia to find a shaman to counter the curse, leaving the rival tribe without their medicine man.

Drifting on the current and looking for a sign of the pink river dolphins, we heard a sound. A susurration like a thousand sheets of paper ripped in the next room; it was a subtle, rolling, sonic tidal wave: aquatic birds called cormorants. Tens of thousands of them flying downstream. They skimmed the river’s surface, flew in lines and vees, solo and in pairs. They flapped and glided, disturbing the quiet with only the sound of their wings beating the air. They flew past us; this endless murmuration bending around our boat and leaving us slack-jawed. When the last of them had passed, our pilot didn’t dare start the engines and spoil the sanctity of the moment.

Eventually, our reverie was broken by the sight of dolphins. First, an arched back and fin emerged in front of us, then a blow and a splash as another surfaced for air, the bubbles marking their underwater location as they circled the skiff. Renni grinned, leaned over, and slapped the water. The dolphins broke the surface, their pale grey skin enlivening to pink. In curiosity and excitement, they eyed us.

Standing on the prow of the skiff, Renni watched them for a long moment. He exchanged words in Quechua with our pilot, smiled wide, and kicked off his shoes.

“It’s safe to swim now,” said Renni, tossing his shirt to the deck, hands going for his belt buckle. “No piranha here. The dolphins, they keep the piranha away.” Stepping out of his pants, he leaped into the river in his underwear. “It’s hot, the river is cool. Who’s coming in?” he called.

Before I knew it, I was down to my boxers, clutching my sunglasses and going over the side after Renni. He was right; the water was cool, offering respite from the rising heat and humidity. I shouted with the shock of the cool water on my skin, went under, and then resurfaced.

“I got it in my mouth,” I exclaimed, spitting river water while picturing flesh-eating amoebas and weird brain-stirring parasites having a field day in my body. Renni laughed at me, shouted to the boat in Quechua, and said, “Nothing a cerveza won’t take care of.” 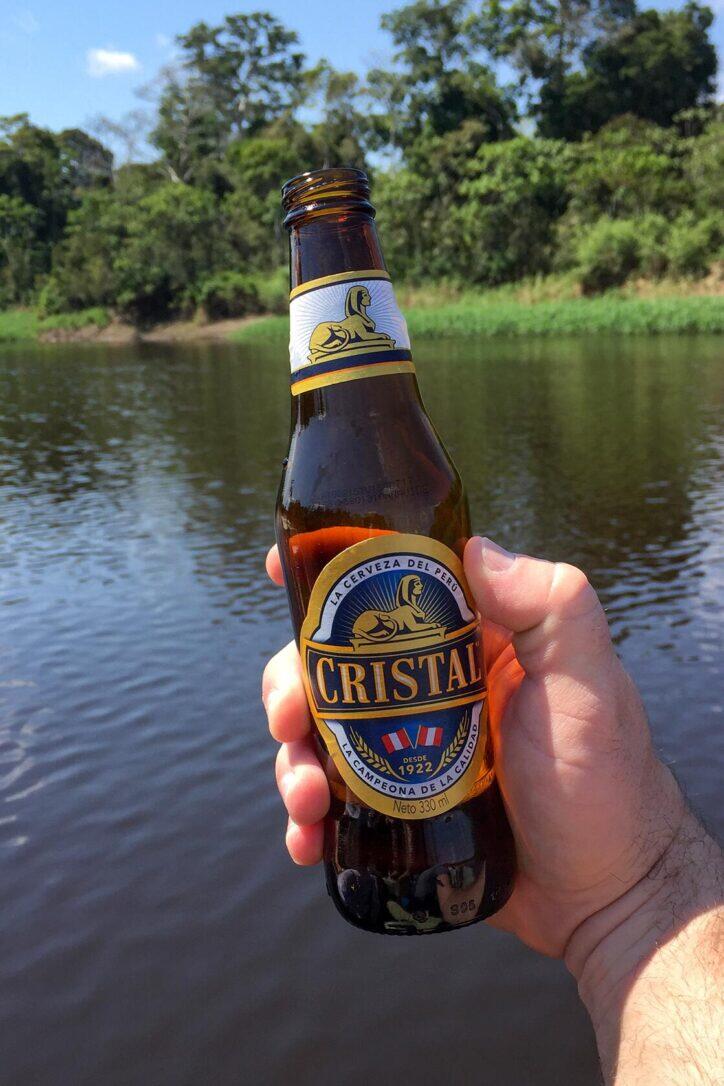 He swam over, and our pilot handed him a pair of pool noodles and two beers. Pitching a noodle my way, he said, “so you can float while we have a beer,” and flashed that grin again. More splashes behind me, the rest of our boat jumped in, armed with pool noodles and ready for a Cristal, the national beer of Peru.

Renni and I clinked bottles and turned them skyward, the watery brew washing away images of a frenzy of fish teeth and the aftermath of amoebas. Three more drinks, and we held empties. Passing them back to the boat, along with our noodles, Renni looked at me.

“Ready?” Renni said and dove, kicking hard, popping up on the other side of the boat. I took a breath, closed my mouth, and dove too, one hand high to feel for the aluminum boat overhead, and came up beside him. After a few minutes of splashing, sipping, and shouting later, our pilot helped us back on the boat. Motoring back, Renni wrapped himself in a towel and grinned at us wider than before.

This is a very funny article, you should write a book about your adventures.

Thanks biasetti and stevemann5962, it's tough to write funny, so this means a lot. And I've been thinking more and more about a travel memoir (in addition to the guidebooks I write), so y'all might have just put that idea over the top for me.

Absolutely agree. Very well written -I felt there with him.