Here's what it’s like to sail on Hurtigruten’s newly launched Galápagos cruise.

iant tortoises weighing 250- to 500-pounds don’t do anything fast, including making babies. Deep among the scraggly bushes and on the grassy mountainous highlands of Santa Cruz Island in the Galápagos Islands chain, monsters were making love, and, while not fast, they were loud.

Just mere feet away, other Galápagos giant tortoises happily bent long, dry-skinned necks to nibble through the grass at something tasty. For as big as they are, these creatures are usually silent as they eat, walk their lumbering walk, and poke around on their weird sideways feet. The only time they verbalize is when they do “the dirty.” This grunting creature was what I had come to Ecuador to see.

Here at the Galápagos National Park, located 600 miles from the west coast of Ecuador, time seems to have stood still for centuries. Many of the 127 islands, islets, and rocks in this distant and isolated archipelago are uninhabited but for creatures who have evolved into their own unique species thanks to that same isolation.

These animals, and the miracle of evolution unhampered by encroachment and industrialization, fascinated Charles Darwin, who explored the region during his famous journey on the HMS Beagle in September 1835. Witnessing the multiple unique species of iguanas, the jaunty little Darwin’s finches, the be-shelled land giants led him to develop the theory of evolution, which he shared in his seminal 1859 book On the Origin of Species.

In January, I followed in Darwin’s footsteps. As herds of multi-colored marine iguanas sunned themselves on the islands’ shores, sea lions gazed lazily and unconcerned up at me as I walked mere feet from them. I felt as if maybe this is exactly what Darwin saw on his first foray into the mysterious series of islands. At least in my mind, the only difference is that I was returning later that day to a newly-renovated small-ship expedition cruise with free beer and wine. 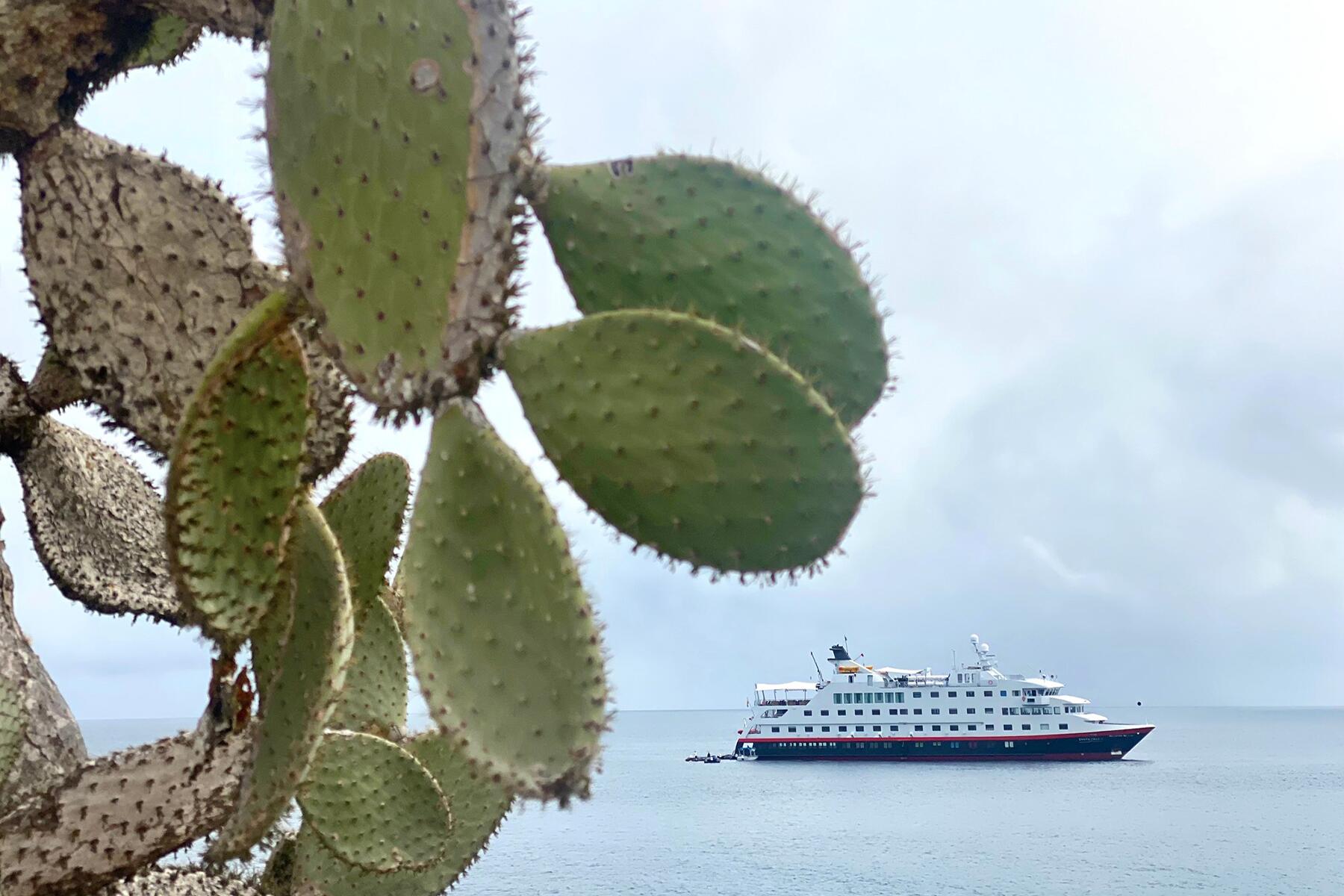 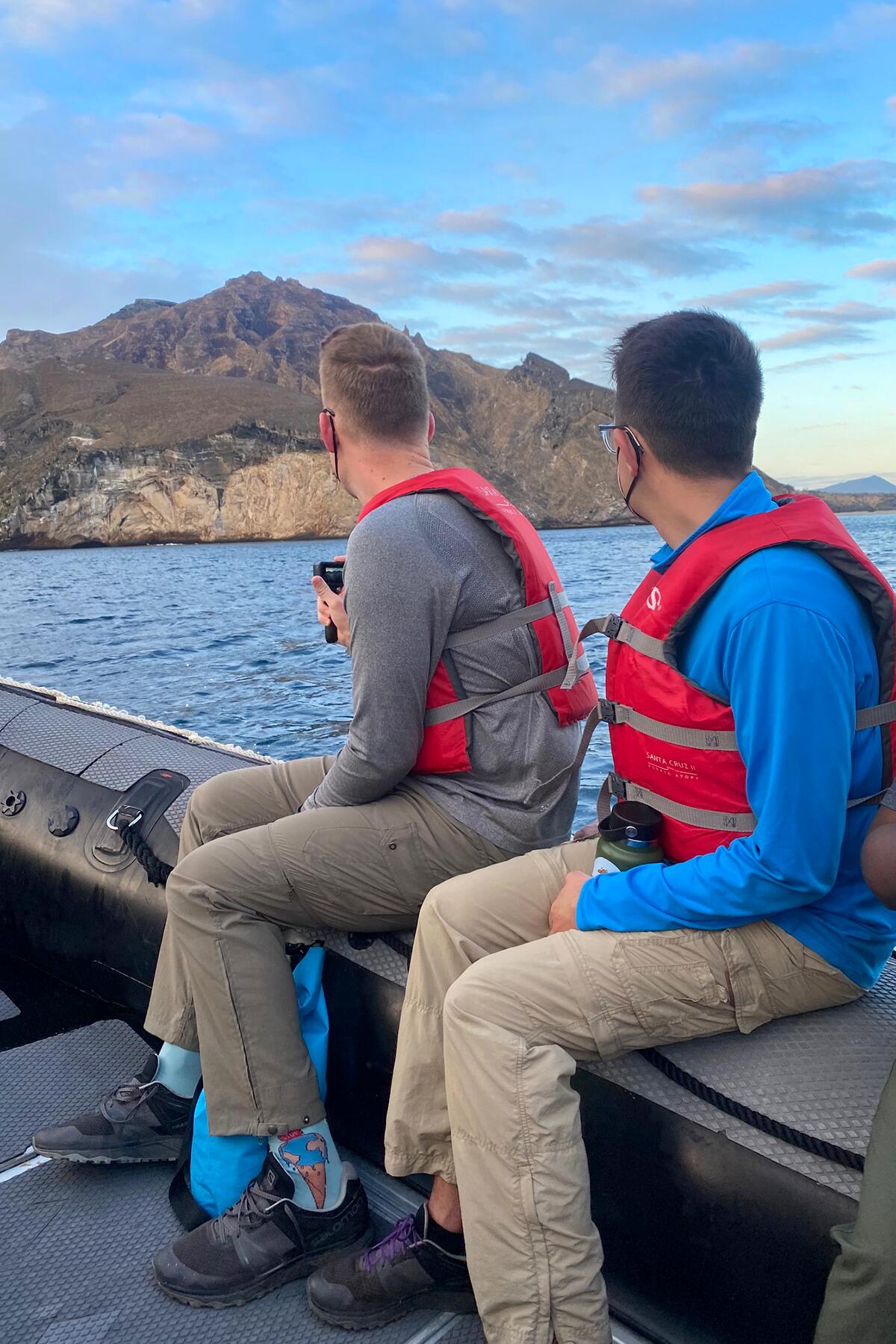 I was hosted by Hurtigruten Expeditions to take part in their inaugural cruise to the Galápagos Islands, a six-day adventure to explore the eastern area of the Galápagos. The renowned Norwegian cruise line promised a deep dive into the history, science, and wildlife of the Galápagos, all while offering the luxury that the cruise line is known for.

Science, history, and pampering all in one? How could a girl resist?

Hurtigruten Expeditions, long-famed for their expedition cruises to Alaska, Norway, and Antarctica, is now offering a selection of small boat cruises to The Galápagos Islands with five new itineraries in 2022 and 2023 that combine fun, uncrowded luxury, and a whole lot of science.

It didn’t disappoint. Even Darwin himself would have been impressed with Hurtigruten’s evolution.

Hurtigruten Expeditions has sailed the polar waters for more than 128 years now, specializing in deep-dive tours to destinations like Antarctica, Alaska, Norway, Lake Titicaca, the Northwest Passage, the Caribbean, Svalbard, and the British Isles, to name a few. Launching January 5th, 2022, the new Hurtigruten cruise to the Galápagos opens up a destination the company had long looked to add. To do so, Hurtigruten teamed up with Ecuador-based Metropolitan Touring, an established travel company offering tours in the Galápagos for more than 60 years.

“This is a significant milestone in our 125-year history of exploring. The Galápagos is one of the world’s ultimate expedition cruise destinations. It is a perfect match between two companies with a proud history, strong heritage, and passion for our oceans and planet’s well-being,” said Hurtigruten Expeditions CEO Asta Lassesen in a statement.

I sailed on the MS Santa Cruz II, a newly-renovated ship with a maximum capacity of 90 passengers, though the vessel had only 35 passengers for its inaugural cruise. While the Eastern Loop cruise is the only offering for 2022, Hurtigruten and Metropolitan Touring have slightly shorter options of the Western Loop and the Northern Loop, which can also be combined into an 11-day itinerary set for 2023 and beyond. Hurtigruten Expeditions also includes the Galápagos in a number of other cruise itineraries, which can be found here.

Our Galápagos Islands cruise started with two days in the Ecuador capital of Quito, a charming and bustling city sitting high in the Ecuadorian Andes. As we explored the open-air markets and Spanish-era architecture of this UNESCO World Heritage City, we also journeyed higher up to explore Cotopaxi National Park, home to the active Cotopaxi volcano and high Andean ecology. 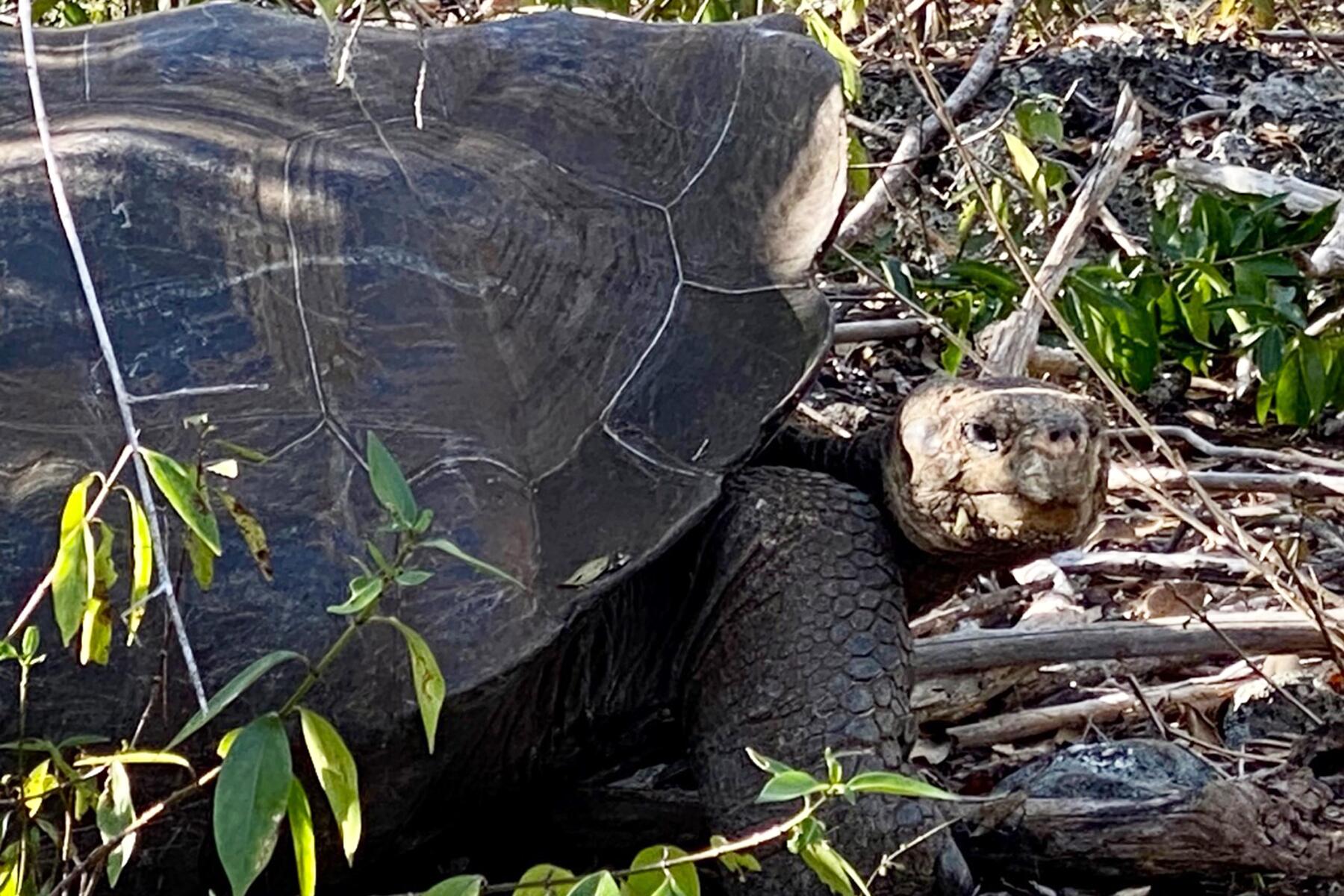 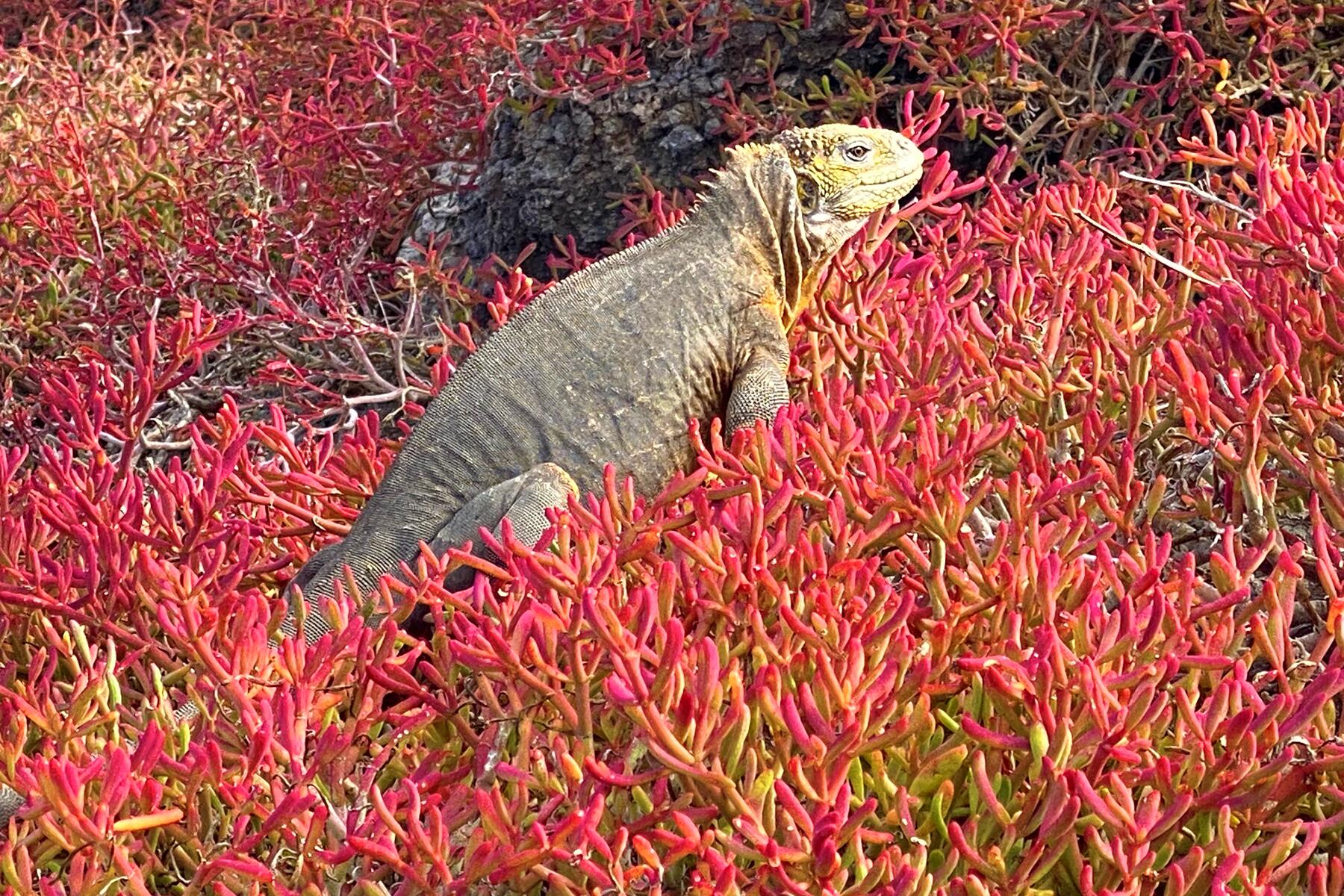 Like the rest of our tour, naturalist guides led us on hikes, pointing out the unique wildlife like the wild alpacas and Andean seagulls that call these towering peaks home. Following lunch at a historic ranch, we prepared to fly to the Galápagos for our science-oriented cruise that promised we would learn “about Darwin’s discoveries and make a few of our own.”

Sailing aboard the “new” MS Santa Cruz II means you won’t herd among large crowds as only 90 guests are hosted at any given time. The MS Santa Cruz II also received a multi-million dollar upgrade leading up to the inaugural cruise, which updated its rooms and suites. The ship includes a first-class restaurant that serves breakfast, lunch, and dinner with vegetarian and local Ecuadorian options, three outdoor decks with scenic views, a common room library with a coffee station, and a sky deck perfect for stargazing. The MS Santa Cruz II is also outfitted with multiple pangas (the local term for Zodiac boats) and a glass-bottomed sightseeing boat to help shuttle passengers to different destinations and activities. 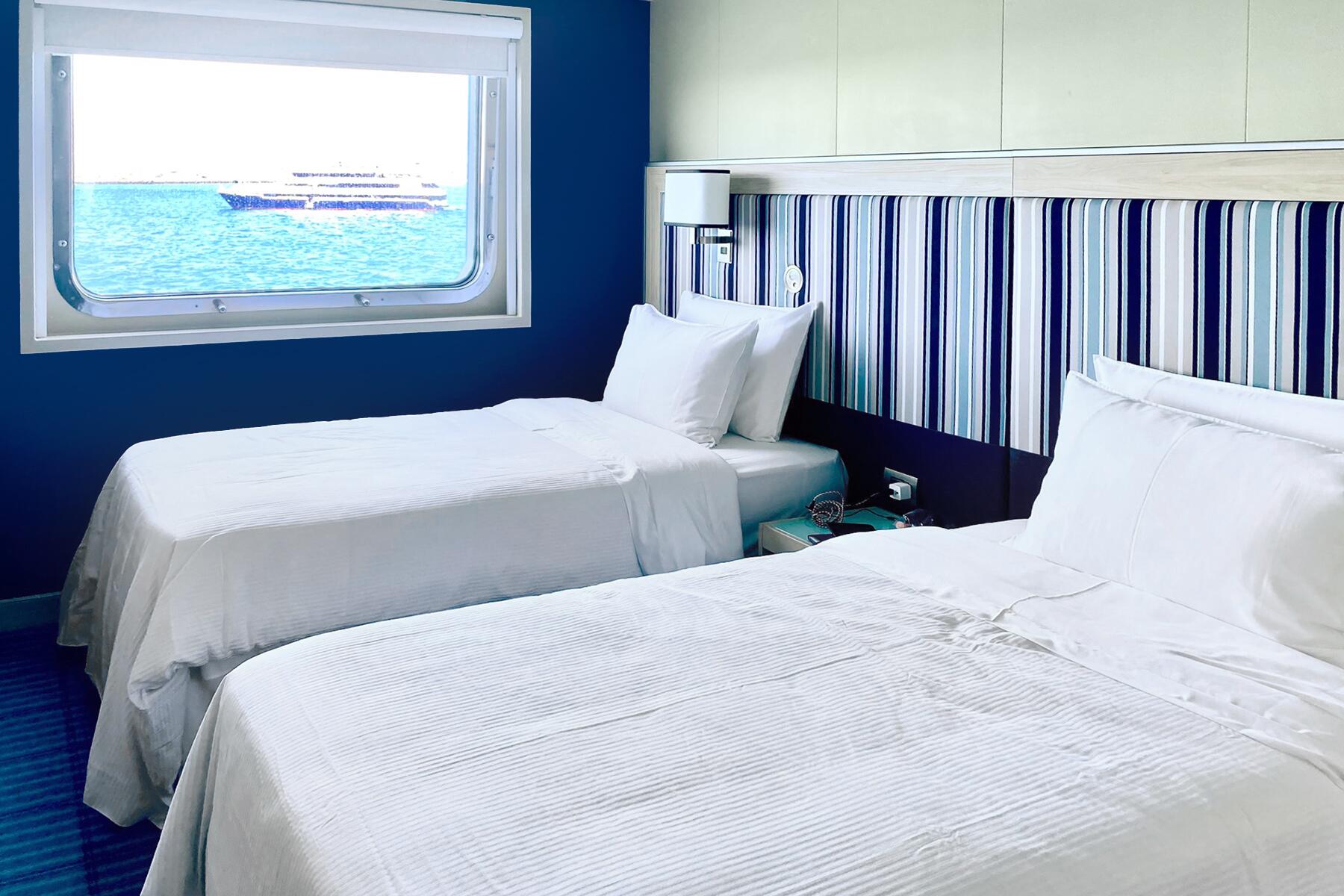 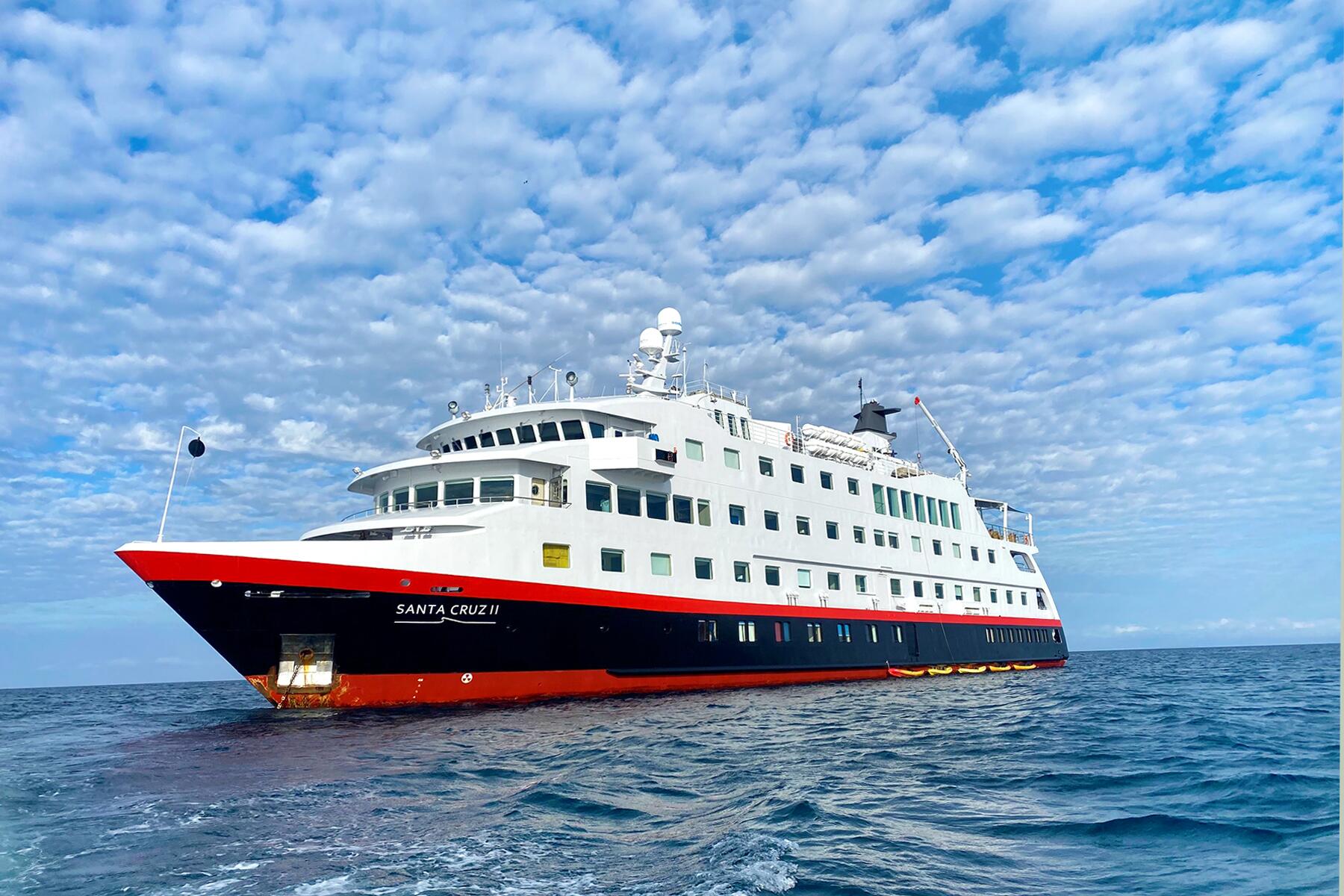 David Guzman, our Galápagos National Park naturalist guide, led us along the wooden walkways of the Charles Darwin Research Center on Santa Cruz Island, one of the organizations that have active Galápagos tortoise breeding programs in Ecuador. In addition to the captive breeding and release programs, the Darwin Center also works to fight invasive species that kill these islands’ native flora and fauna.

It was feeding time at the Darwin Center, and in separate enclosures, baby tortoises no bigger than pinwheels nibbled at dark greens, while in another enclosure, big males stretched out their long necks in shows of dominance over other male tortoises. Eventually, these free meals will end when the center releases the different species back to their original homeland islands in the Galápagos.

“They are feeding them organic plants from a type of tree that allows them to stretch their necks to feed on what is found around them. What they live on in the wild is very similar to what we have right here, but they only feed them every three days because the animals in captivity tend to be lazy when looking for their own food,” said Guzman. “The idea is not to make them dependent on humans because, at some point, they have to be released in the wild, even the ones that are being reproduced in captivity. But in nature, they are going to eat as much as possible. All the calories that they don’t consume are transformed to fat, which enables them to survive in periods where there is no food.”

Thanks to breeding programs at The Darwin Center and the Cerro Colorado breeding center at Puerto Baquerizo on Puerto Baquerizo Moreno, the Galápagos giant tortoise populations are doing better than they have for centuries. Before sailors and whalers stumbled upon the archipelago in the 1600s, more than 250,000 tortoises roamed around the Galápagos Islands. Sailors hunted these giants for their massive amount of meat, and the population dropped to 15,000, placing them on the endangered species list.

The breeding programs are working, and the Galápagos giant tortoises now number more than 30,000. They have a long way to go to reach their original numbers, but it’s a start. One of my favorite parts about the Hurtigruten Expeditions tour was learning about the conservation efforts, the ecology, the geology, and the history found on the islands.

Each day included a science briefing, and a debrief of what the next day’s adventure would look like.

Most days on the cruise started with short or long hikes to spy iguanas or the famous red and blue-footed boobys. Other days, we snorkeled with sea lions who spun like playful ghosts around us as we peered at an octopus or black-tipped sharks. Sometimes, we watched as a Galápagos hawk picked at placenta from a sea lion who had just given birth, her tiny brown pup shivering against her blood-stained flank while another group peered down the glass-bottom boat to find the same creatures we did while snorkeling. Each day included a science briefing, and a debrief of what the next day’s adventure would look like.

As with most Hurtigruten Expeditions cruises, conservation and local experiences are key aspects of the cruise. One of those uniquely local experiences included visiting a local sugarcane/cacao plantation owned by Adriano Cabrera Sanchez. Deep in the verdant green highlands of Santa Cruz Island, Mr. Sanchez came to the Galápagos in 1966 to farm. Today, he hosts tours of his plantation and lulls travelers with his surprisingly strong sugarcane moonshine.

“The added itineraries and experiences are the result of what has proven to be a very fruitful partnership for the benefit of our valued guests. Our expanded offering will truly cover all the key areas of the Galápagos, which are all distinctively different from each other, offering guests an otherworldly experience combined with incredible wildlife,” said Lassesen in a statement.

For cruisers who also wish to reduce their impact on the environment, the new Galápagos cruise itineraries are right up your alley. Wherever Hurtigruten sails, the Hurtigruten Foundation supports initiatives that support local communities, help reduce plastic and waste in marine waters or help protect endangered species. 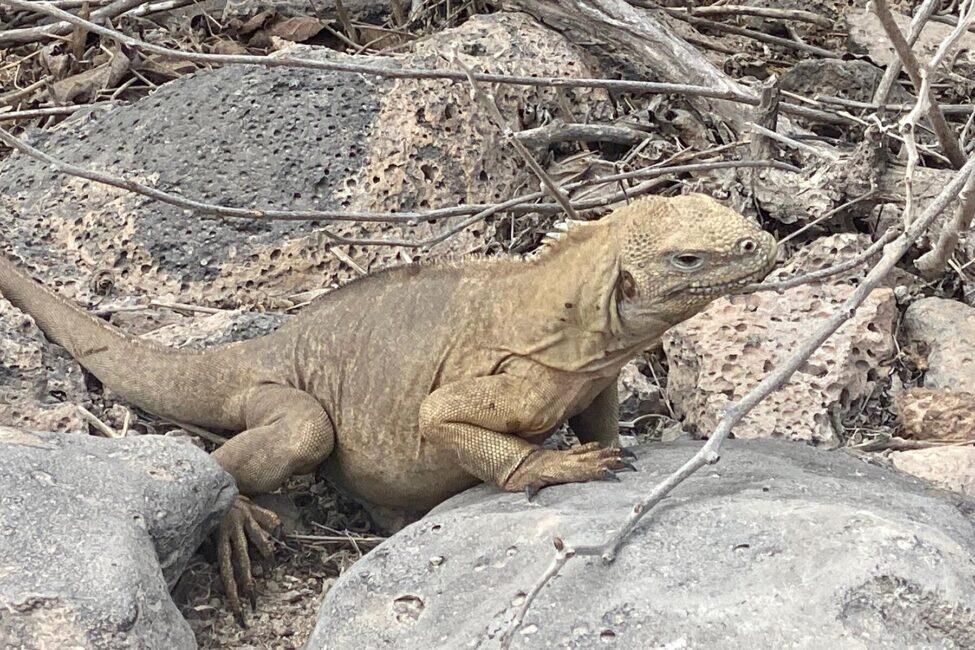 As the cruise line launches its carbon-neutral vessel for expeditions in Galápagos, it is also partnering with The Galápagos Conservancy to help fund the organization’s breeding, rearing, release, and research programs for the giant tortoises.

You won’t find big raging parties on the Hurtigruten Expeditions’ newest Galápagos itineraries, but you might see sea lions partying it up on the beaches. Boobys and the Galápagos albatross squawk out their own loud music over the strangely cheerful-looking marine iguanas. If conservation, education, and a deep dive into a place most people consider a “bucket-list” destination is more your speed, this cruise will leave its mark. Like Darwin himself, you’ll discover a pristine world that seems touched only by evolution, all while enjoying unlimited beer and wine on a small expedition-style ship.

Check out more information about Hurtigruten Expeditions and its Galápagos itineraries.