Just 80 kilometers east of Medellín, picturesque Guatapé is a lake-filled paradise ideal for either a vigorous day trip or a relaxing week. Originally indigenous territory before the arrival of Iberian conquistadores, the area is named after a tribal Cacique. The name now refers to both the colorful town, called Pueblo de Zócalos, and the man-made reservoir, which was built in the 1970s to provide hydroelectricity. The area is now home to a series of connected lakes that are the site of many water-based activities. Add to that the area’s year-round spring-like climate, and you’ve got a prime vacation spot known as the “Hamptons of the Medellín.” Here are five reasons to visit Guatapé.

Take a boat ride over a submerged town 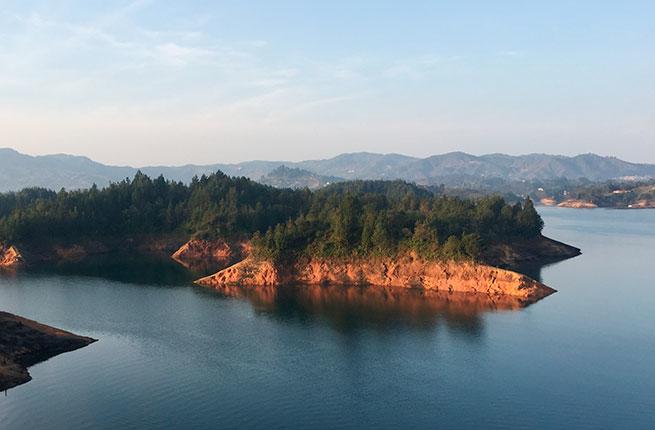 In the 1970s, more than 6,000 hectares of land in Guatapé were flooded, which submerged the town of Peñol and created freshwater lakes, which you can navigate by boat. A boat ride will take you to the last remnant of the underwater town, a church cross emerging from the water. The lakes can also accommodate waterskiing, fishing, and scuba diving, but only in shallow areas. More adventurous souls should try the canopy zipline over the lake. You’ll find boats, paddleboards, jet skis, and kayaks for rent at the reservoir waterfront in Guatape. On the border of Guatapé and El Peñol, La Piedra (The Stone) is a smooth 10 million-ton monolith looming 600 feet above ground, once worshipped by the Tahamies Indians. Don’t worry, you won’t have to break out the rope and harness to get to the top (unless you want to):  A zipper of stairs wedged into a crack will take you 650 steps up to the top of the rock, where there’s a snack bar, religious artifacts,  and  spectacular views of the region. If your legs aren’t too shaky, do 100 more steps up the lookout tower for the ultimate birds-eye view.

Walk around the Pueblo de Zócalos 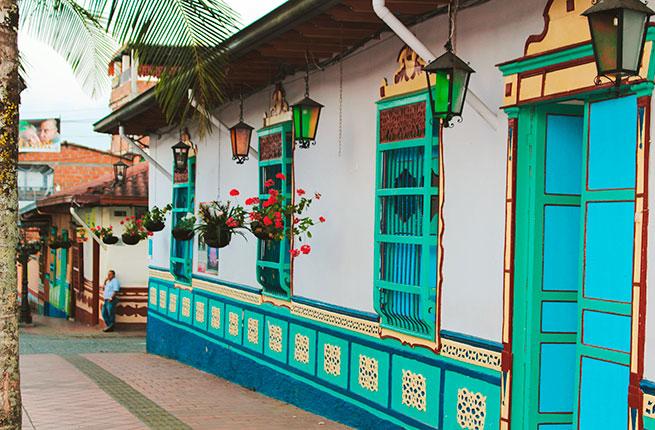 The town of Guatapé, also called the Pueblo de Zócalos, is a trading hub for farmers. Stroll the cobblestone streets lined with colorful architecture, stop by the Iglesia de Nuestra Señora del Carmen for mass, or shop for handmade crafts and jewelry. Don’t forget to stop for an excellent cup of coffee at Café La Viña, which you’ll find right by the huge silver fish sculpture in the town square. Find the “Calle Del Recuerdo” (Memory Lane), the only street that survived when the town was flooded by the reservoir.  If you don’t want to walk, you can also take a ride on a tuk tuk.

By boat you can also visit La Manuela, the lakeside mansion once belonging to Pablo Escobar, and named for his daughter. One of many fincas owned by the notorious cartel boss, in 1993 it was bombed by rival Cali Cartel just eight months before Escobar was shot and killed while fleeing police in Medellín. It now sits, a decaying ruin neglected by the government, surrounded by beautiful water.  On a tour, visitors are able to roam the graffiti-covered property, which includes a discotheque, tennis courts, stables, and a swimming pool. Keep an eye out for the double walls, which were used to store cocaine and money.

Some would say the best way to experience a country is through its food. Colombia is famous for coffee, and you’ll find an excellent cup at Café La Viña. Vegetarians gravitate to Etero Cocina Artesanal for its variety of delicious and healthful options. For traditional chicken and potato ajaico soup and tripe, pork, and chorizo mondongo soup, try Las Cazuelas de la Abuela, where if you’re lucky you’ll actually meet the namesake grandmother. You can’t leave Colombia without having bandeja paisa, traslanted to “food of the people.” Traditionally,  the loaded-up plate is filled with beans, white rice, chicharron, ground meat, black pudding, chorizo, fried egg, sweet plantain, avocado, and arepa. Since Guatape is known for its trout, restaurants like La Fogata switch out the meat for fish.  For a variety of food vendors with portable snacks, head to the malecón, or reservoir waterfront.