When the newly elected Chilean President rented himself a home in Barrio Yungay, it was a move that was both surprising and reflective of his political agenda.

ungay is a rough diamond of a neighborhood, one where colonial and Belle Époque architecture converge with street art, and residents greet each other by name. Founded in 1839, Chileans know Yungay is considered the country’s first barrio and was once a magnet for well-heeled European migrants who constructed stylish mansions in the 19th century. Central Santiago’s Yungay district has long worn its national heritage badge with pride. But after going through an industrial phase in the 1950s, recent social problems—including violence and narco-trafficking—have pummeled the community.

Now, an esteemed new president has moved into this barrio patrimonial, seemingly writing a new chapter in its storied history. Unlike the United States, there is no equivalent to the White House in Chile. Gabriel Boric—Chile’s recently elected, left-wing, millennial president hails from the Patagonian city of Punta Arenas and was never a homeowner in Santiago (unlike his predecessor, the 72-year-old billionaire businessman Sebastián Piñera). The need for Boric to relocate to a district that also ticked security boxes was paramount. Considering Yungay’s sketchy reputation, it is all the more remarkable that this 36-year-old president chose to rent a home in the heart of Yungay on Huérfanos street, between Libertad and Esperanza (translation: Orphans, Freedom, and Hope Street). While Yungay offers a snapshot of the Chile he inherited, Boric chose it as his barrio presidencial in order to send a message to Chileans.

A New Kind of President Moves In

“Boric moved to Yungay because he wanted to cause an upset, I think,” says Mauricio Pérez, chef and owner of Casa Kiltro, a restaurant that serves traditional Chilean dishes. “Chile’s presidents have always chosen to live in ABC1 neighborhoods, where a European Chile exists, but that isn’t our Chile. He decided to move to a distinctly poor barrio that also falls under national heritage and, in my opinion, Boric wants to give a clear signal about what he intends to achieve during his four-year term.”

“Living in a traditional Santiago neighborhood illustrates with examples the idea that we want to recover the barrios.”

From a public transport perspective, Barrio Yungay makes sense for any downtown employee. While commuters can take the efficient metro to Palacio de La Moneda, President Boric’s spacious and rented mansion is a 15-minute drive or half-hour walk from his place of work. Besides being a prime central location, the neighborhood that gave birth to modern-day Santiago has long been a cultural hotspot, adds Pérez, who fell for Yungay’s charms several years ago.

“I started teaching gastronomy at Yungay’s Liceo Emilia Toda de Balmaceda school and got to know the passages and streets that show off European architecture,” recalls Pérez. “I fell in love with this barrio, its history, and the good people who live here.”

You’ll find no fewer than 30 notable sights in Yungay, such as the Museo de la Memoria y los Derechos Humanos, which tackles Chile’s difficult years under military dictatorship. In addition, the barrio is home to religious buildings, theaters on the self-guided Ruta Patrimonial (Heritage Trail), and historic pastel-hued houses lining the quiet streets. It’s also an up-and-coming hipster neighborhood, home to cafés and galleries (a regeneration that began long before Boric moved in). It seems likely that positive improvements will continue, and hopefully in a controlled way that doesn’t outprice locals.

Given that residents agreed they wouldn’t bother the president with selfies, Boric breezes about town as he pleases—with a two-person security detail, of course. Half a block from his pale-green home on Huérfanos, right next to the carabineros (border guard) barricade, is Solo Vinilo. This discrete vinyl record shop stocks a diverse array of artists from Billie Eilish to ELO in upcycled, yellow beer crates. Fans of Chilean cumbia should snap up a Tommy Rey record. 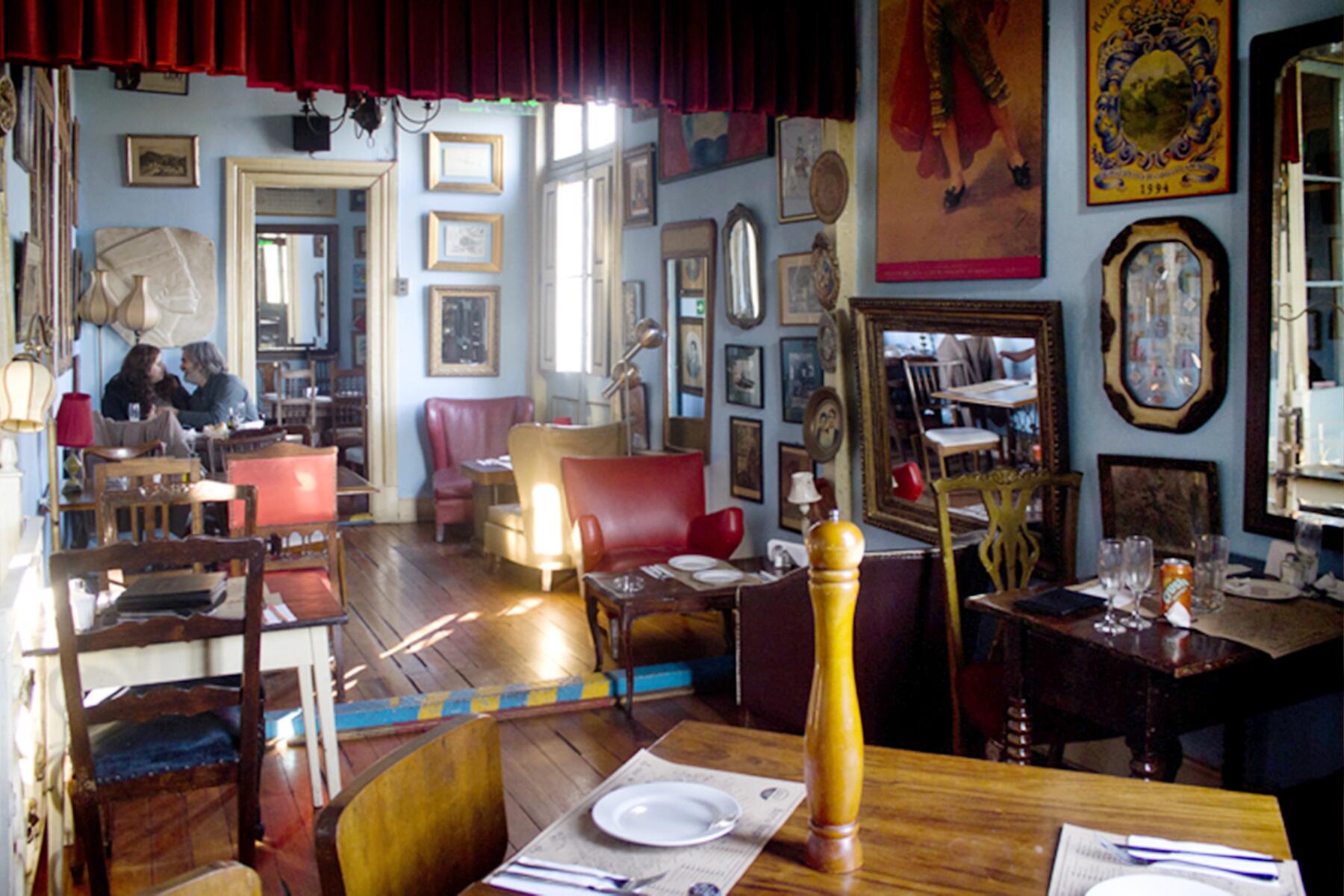 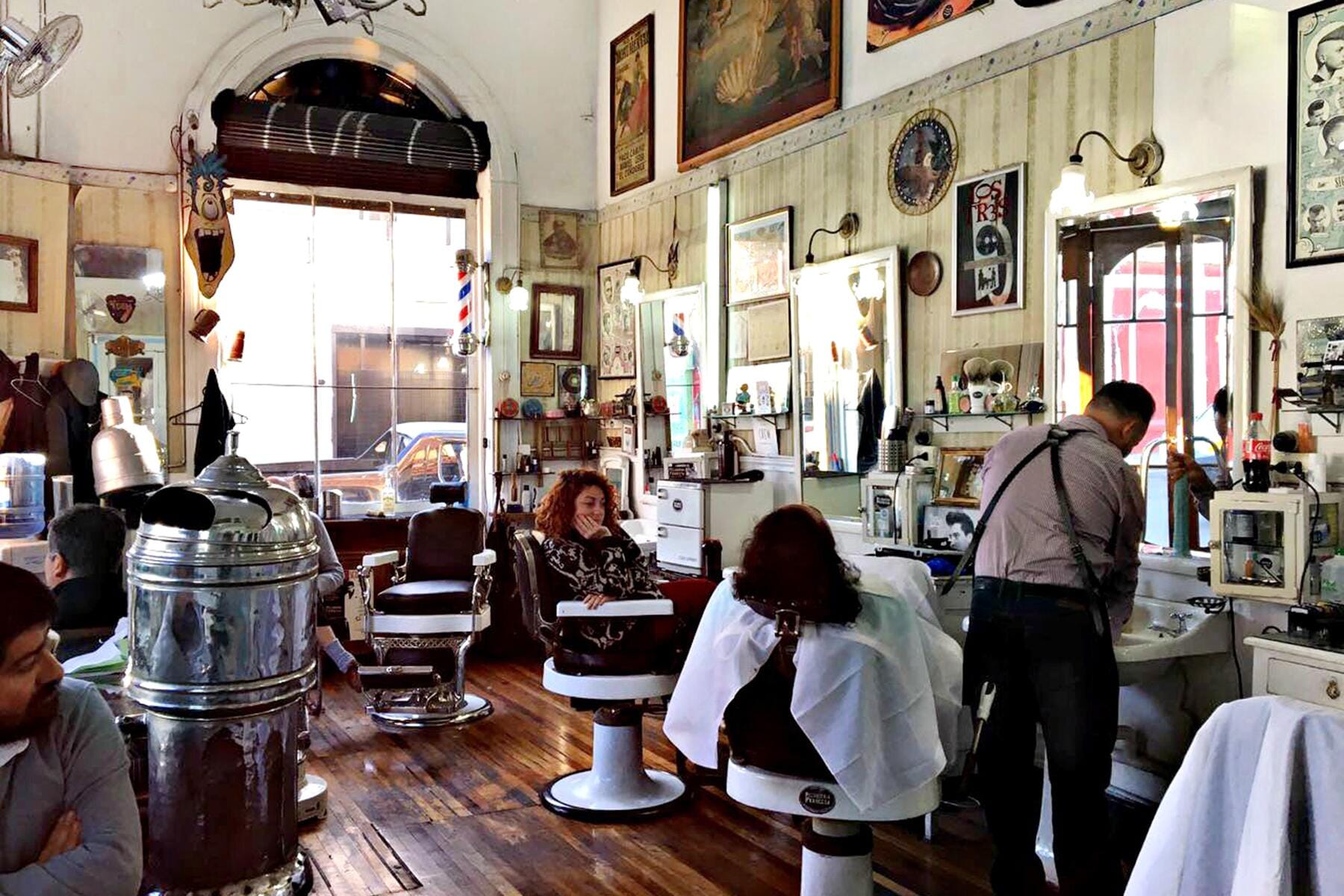 The president allegedly gets his carbs fix at Selvaggio Bakery, where he picks up a sourdough loaf and is known to take away their delicious pizza. Should he or any of his cabinet members require a quick, traditional wet shave, the 1868-founded Peluquería Francesa is just around the corner—a historical barber shop that doubles up as a respected restaurant. As for a flat white, President Boric can get a caffeine fix at Peluquería Francesa’s sister establishment, Casa Museo.

Step back in time, wandering through the warren of antiques and artifacts to the café that’s hidden away at the back and is run by chef Pato Salinas. All these spots are a stone’s throw from the casa presidencial and Boulevard Lavaud, a focal point in the barrio.

A Move That Mirrors a Presidential Agenda

Many residents still live in precarious circumstances despite the fusion between cared-for history and regentrification. During the pandemic, chef Mauricio helped where he could, the Casa Kiltro team cooking up more than 14,000 free meals and baking 1,500 birthday cakes for children. Tackling such issues is the left-wing president’s priority, as he told Canal 13’s Las Caras de La Moneda. “Living in a traditional Santiago neighborhood illustrates with examples the idea that we want to recover the barrios,” said the president. “And those barrios that are today threatened by real-estate destruction, crime or drug trafficking, are something we want to recover,” he said.

When it came to renting this mansion at Huerfanos 2487, it turns out Pérez knew the residence well. “I know that house intimately, it’s spacious and beautiful with lots of bathrooms!” says Pérez.  “Until November, I was planning to invest in a café and live upstairs. But the pandemic was still in the way, Boric won the election, and the owners told me that the presidential office had started conversations about renting it.”

Boric and first lady Irina Karamanos have lived in Barrio Yungay since March 2022. Besides installing 5G, which benefits residents, there have been positives and negatives to their move. “While the entire barrio hasn’t become safer, it’s certainly safer in the vicinity of Casa Kiltro, which is helped by the carabineros’ presence,” explains Pérez. “There are quite a lot of ‘presidential tourists’ who are curious about why Boric has chosen to move here. Sometimes roads are blocked if he’s receiving visitors or there’s a demonstration, but that’s part of the price of him living here and the price of tranquillity.”

As for the property itself, should Boric wish to make any changes, such as painting the walls or hanging up pictures, he has to get permission from the National Heritage Ministry—just like any other Yungay resident.