It’s surprising that anyone who ever visits Rio actually ends up going home.

Between the beautiful beaches, mountains, and urban forest, Rio is a magical city that grabs your attention with its natural beauty and laid-back attitude. It may seem like the city of Carnivale and caipirinhas would be too short for a weekend jaunt, but the ocean breeze and samba music are like magic to the soul; this is the place to go for rejuvenation and relaxation. Rio de Janeiro embodies a certain joie de vivre that hits you the minute you land and will last long after the weekend has finished.

Land at RIOgaleão Tom Jobin International Airport and be ready for the infectious joy of the city to hit you. Outfitted with famous local shops and restaurants in each terminal, scope out what piques your attention for a great glimpse of what’s to come and where to go. Ride the excitement of landing at one of the world’s most iconic cities for natural beauty and book it over to Sugar Loaf Mountain for incredible panoramic views of the beaches, mountains, and urban forest. Ride the cable car up to see how the city has so famously wrapped itself around its natural surroundings.

INSIDER TIPBefore heading up to Sugar Loaf and Christo make sure to check visibility for the day. Nothing will ruin the experience and view more than being stuck in the middle of a cloud. 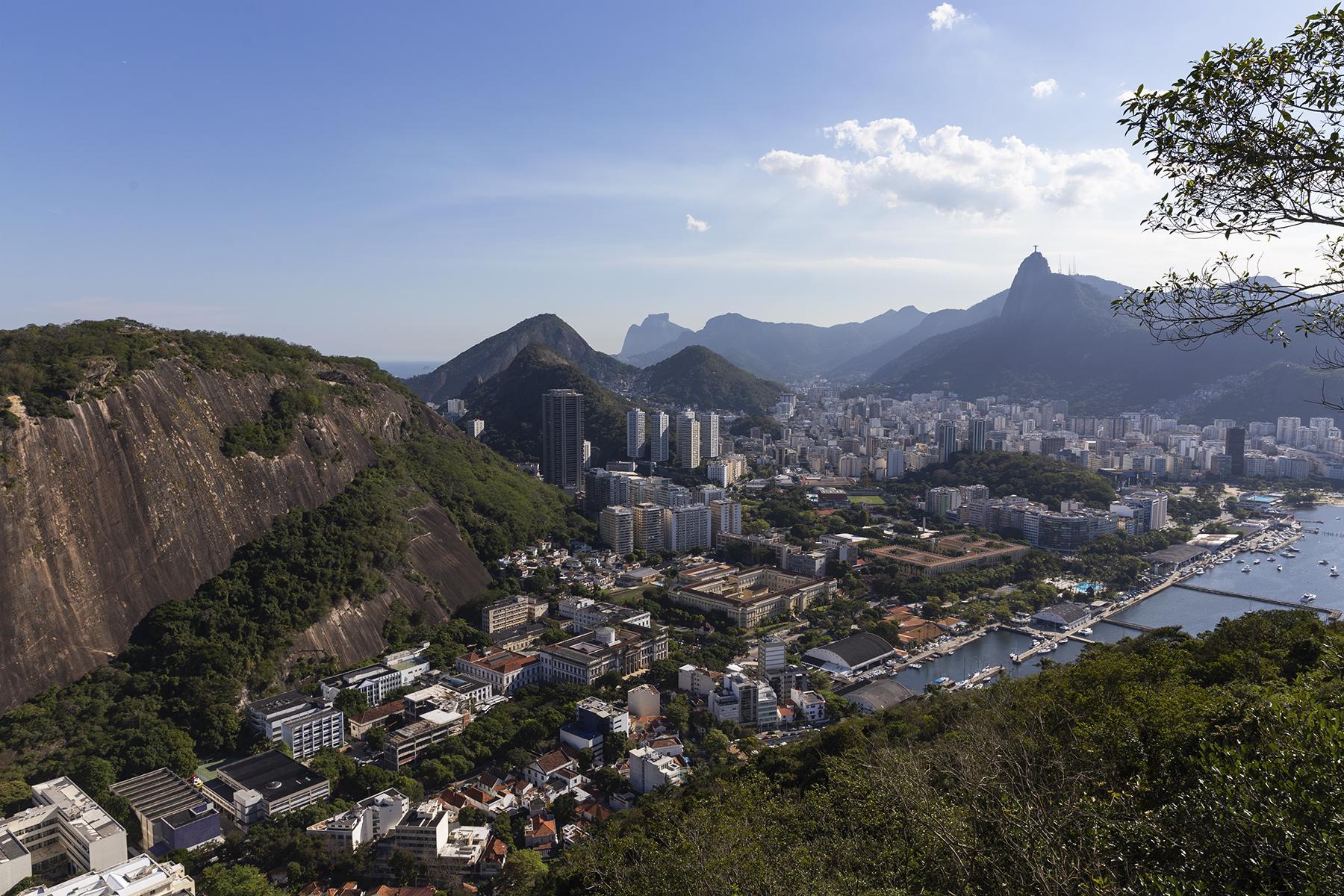 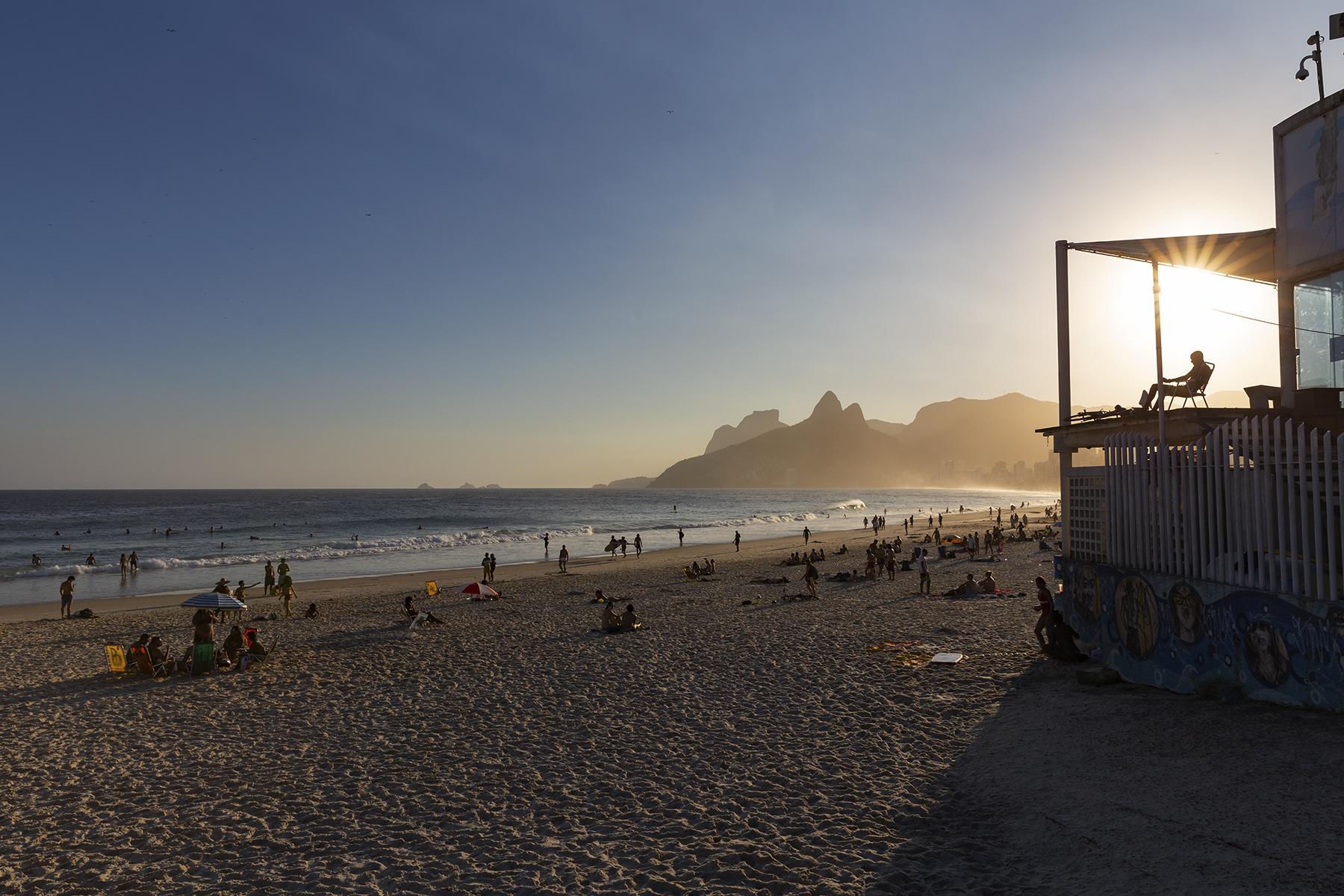 Depart Sugar Loaf and quickly make your way over to Ipanema Beach to catch the sunset over Two Brother Hill (Morro Dois Irmãos) with the locals on the Arpoador rock. An orange glow fills the sky while surfers ride the last few waves, and everyone from businessmen to snack vendors pause to watch the city go from day to night. Locals are well versed in appreciating the beauty around them.

If you can muster up the last remnants of your energy, head over to Palaphita. An outdoor lounge overlooking one of Rio’s lagoons, it’s a great place to snack on some tapas and order your first caipirinha, Brazil’s national drink.  Try the classic version with lime or take advantage of their different fresh fruit options like mango for a great twist. Sink into their rustic jungle themed décor to relax after your long journey. If you’re lucky, you might just spot some capybaras roaming around.

Get up early to avoid the crowds and head directly to Corcovado to see the Christ the Redeemer statue.  Seeing a giant Christ up close while surrounded by hoards of selfie sticks may not seem appealing, but the views of Rio are outstanding and worth every accidental bump from a tourist. Rio is best viewed from a bird’s eye perspective. Gaze out at the various vistas where lush forest meets deep ocean blue, and see if you can spot any clouds below. You can grab lunch at one of the various café’s located below the lookout at Christ’s feet, but if you want to do lunch the right way in Rio then head to Confeitaria Colombo in downtown.  As the oldest (120 years!) and most famous coffeehouse in the city, Colombo exudes a luxurious history in every nook and cranny.  Eat classic Brazilian dishes like coxinha and delectable brigaderos while appreciating the old school beauty displayed in the grandiose gilded mirrors and Tiffany glass ceiling. An icon of 19th-century glamour and class, revel in the scrumptious pastries and let your mind wander to decades past. 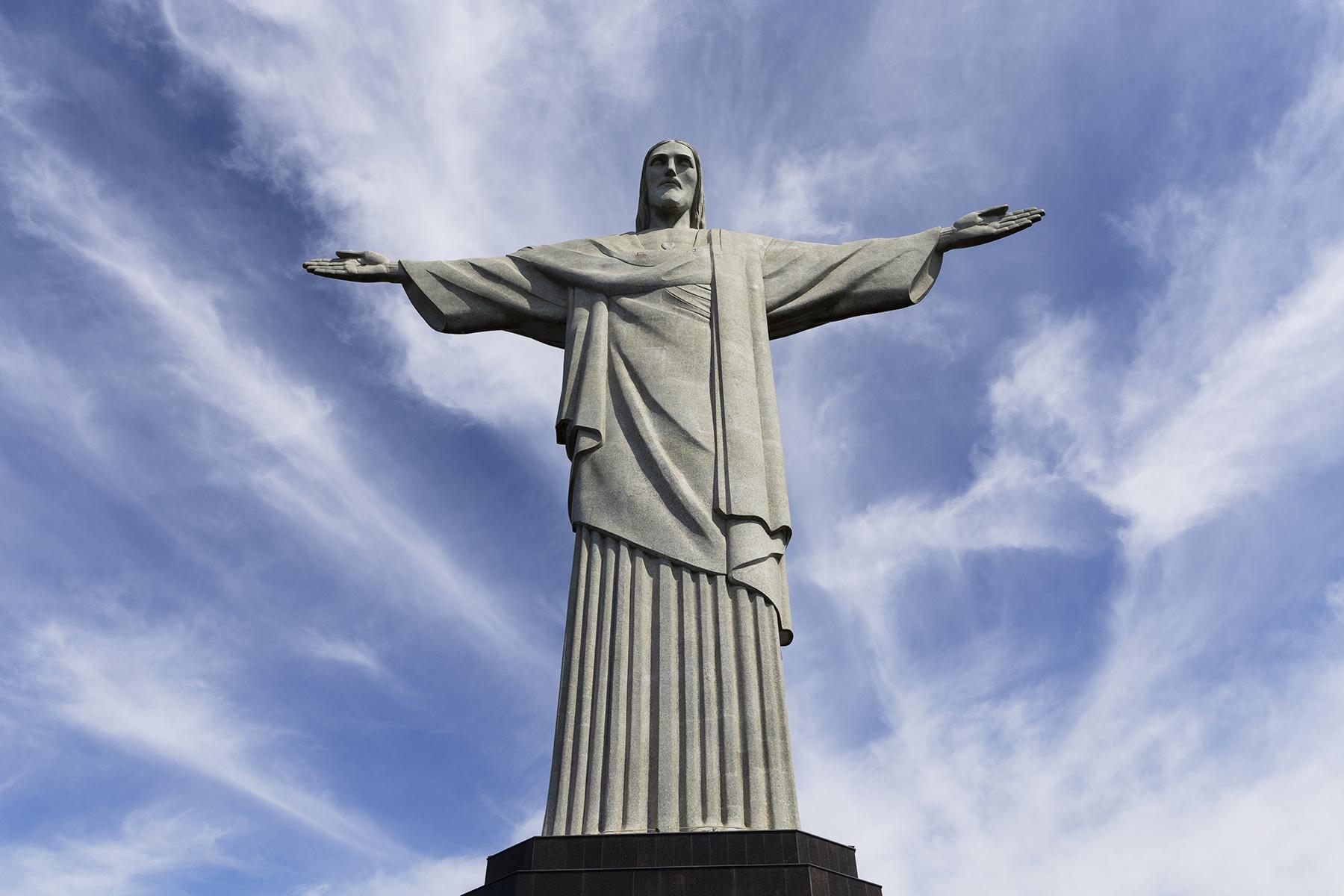 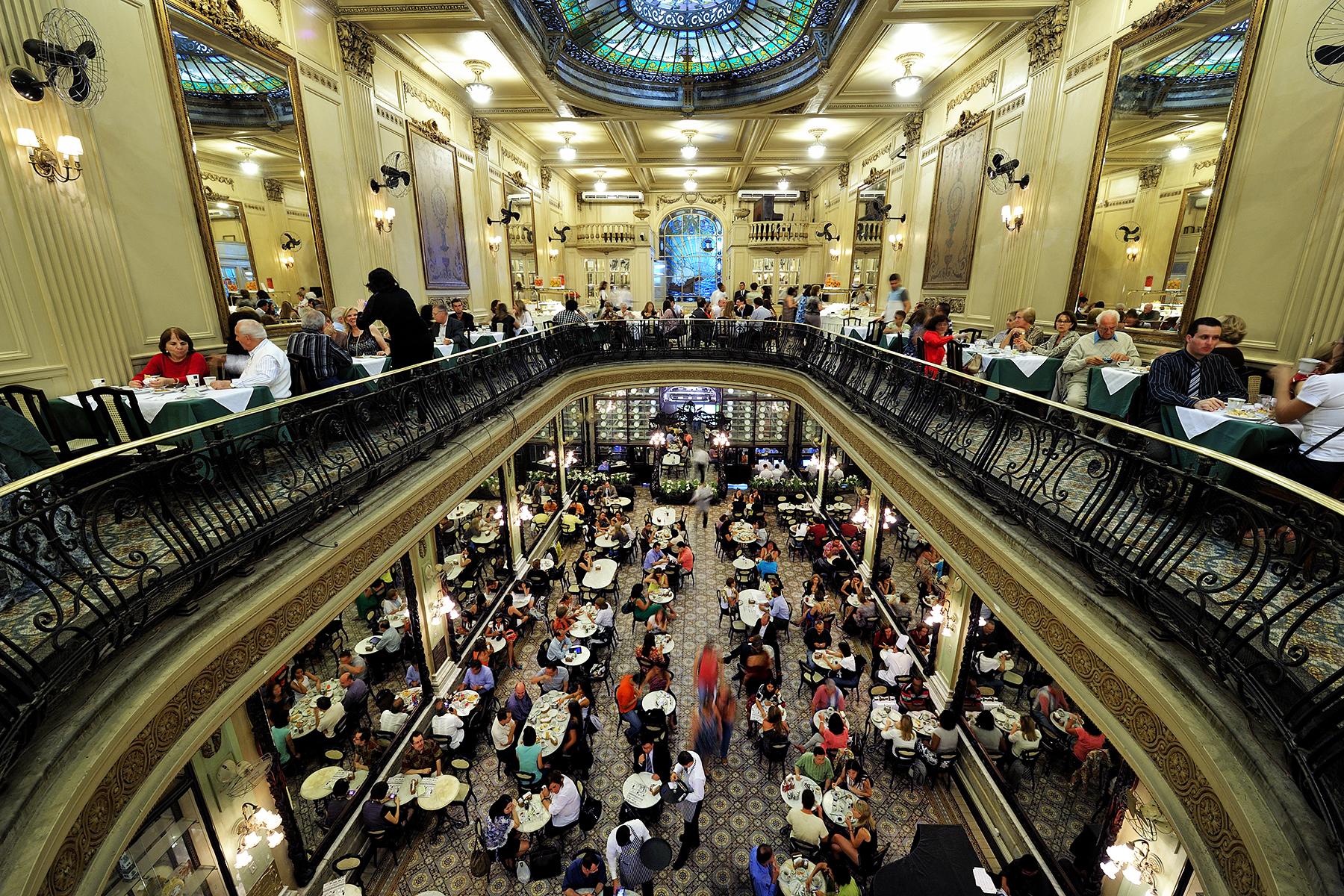 Now that you’ve crossed off some major landmarks and the sun is shining up above, there’s only one thing left to do: the beach. Grab your suit and head to the shores of Copacabana for some true vacation time.  You haven’t experienced Rio until you have slipped your toes in the sand. After hitting the Atlantic Ocean, stop at one of the beachside cafes for a freshly cut coconut water. A refreshing green coconut on the beach is a definite living-your-best-life vacation moment.

INSIDER TIPRio is known for its beaches, but don’t discredit its museums. The Museum of Modern Art and the Museum of Tomorrow are great options for a rainy afternoon. 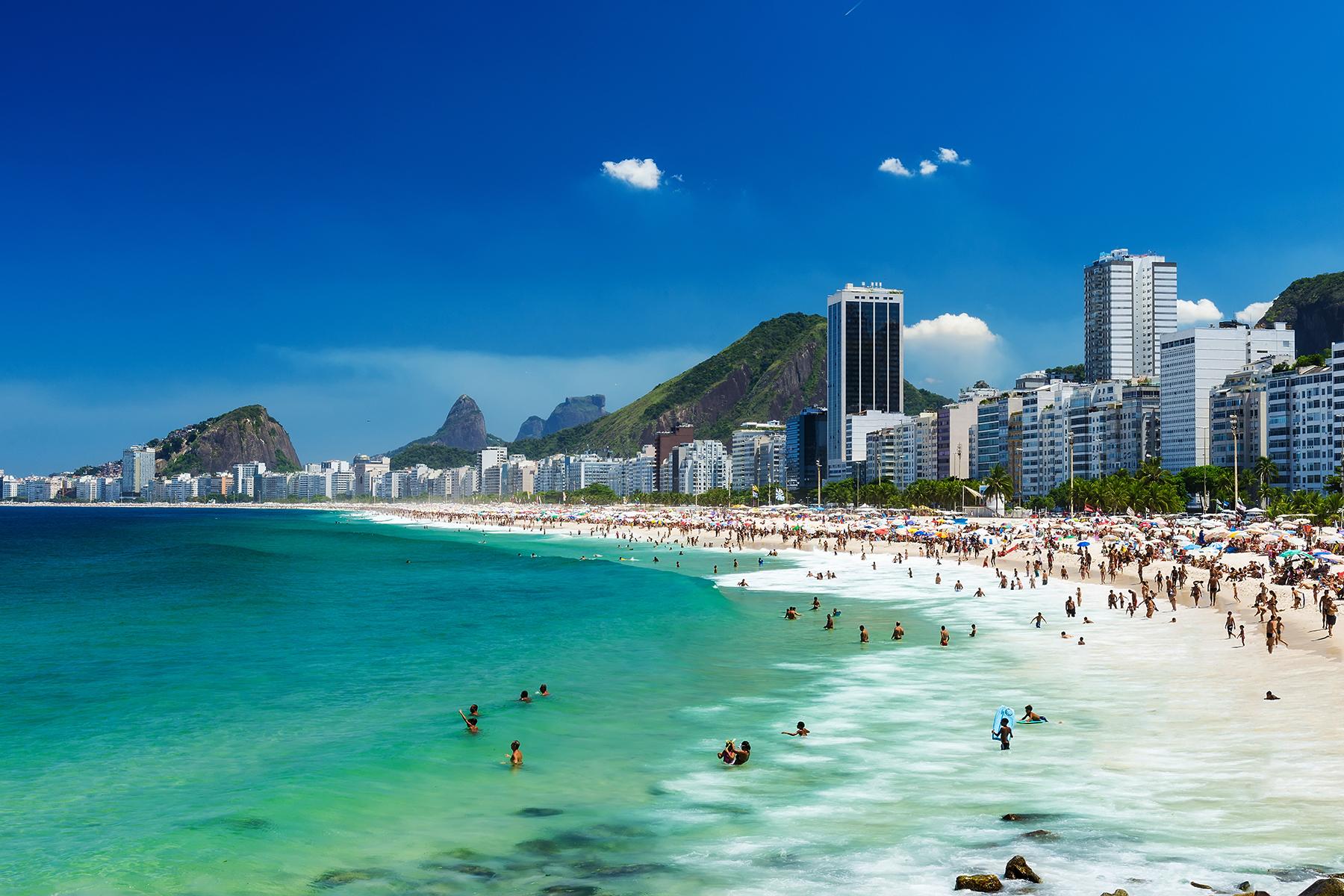 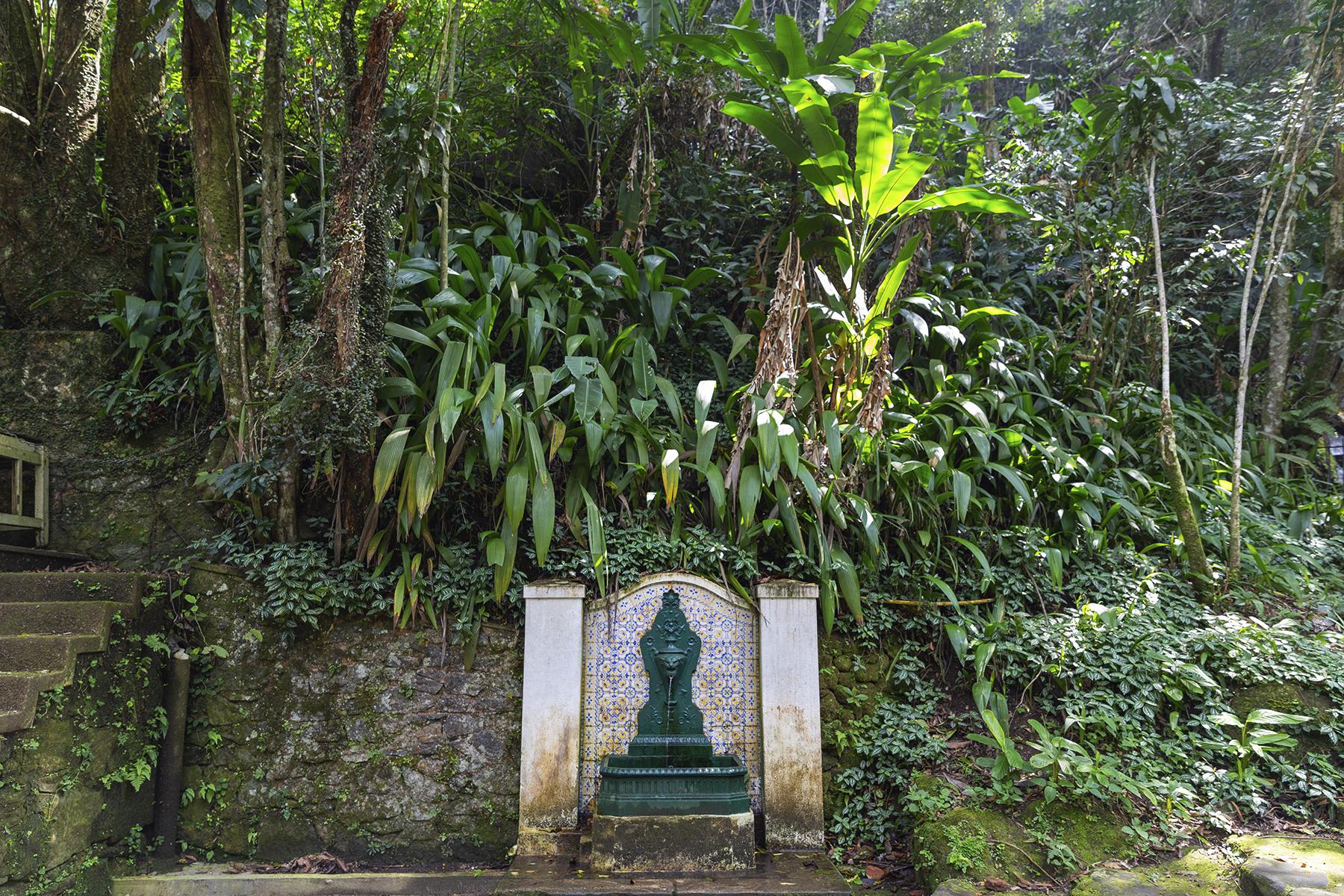 Make sure your last night in town counts and head to Rio’s notorious nightlife neighborhood, Lapa. On the weekend it’s filled with blaring samba music and laughter as locals flow in-between the open-air bars that line the streets. The real place to go is Rio Scenarium, a historic three-story antique shop that was converted into a restaurant and samba club. Come for the rotating galleries of leftover antiques that make up the décor (including a vintage car), but stay for the music and dancing.  Don’t be afraid to get out there, most locals are usually more than happy to teach a few samba steps to tourists out for the night.  Don’t fret if you have two left feet, grab a table with views of the dance floor and you’re fitted with free entertainment.

Spend your last day in the Tijuca Forest, a tropical rainforest that serves as the world’s largest urban forest. Spend the morning exploring its bounty of hiking trails, vistas, waterfalls, and unique tree species. Keep your eyes peeled for monkeys swinging from palm trees and immerse yourself in a crucial part of the city’s identity and natural history. 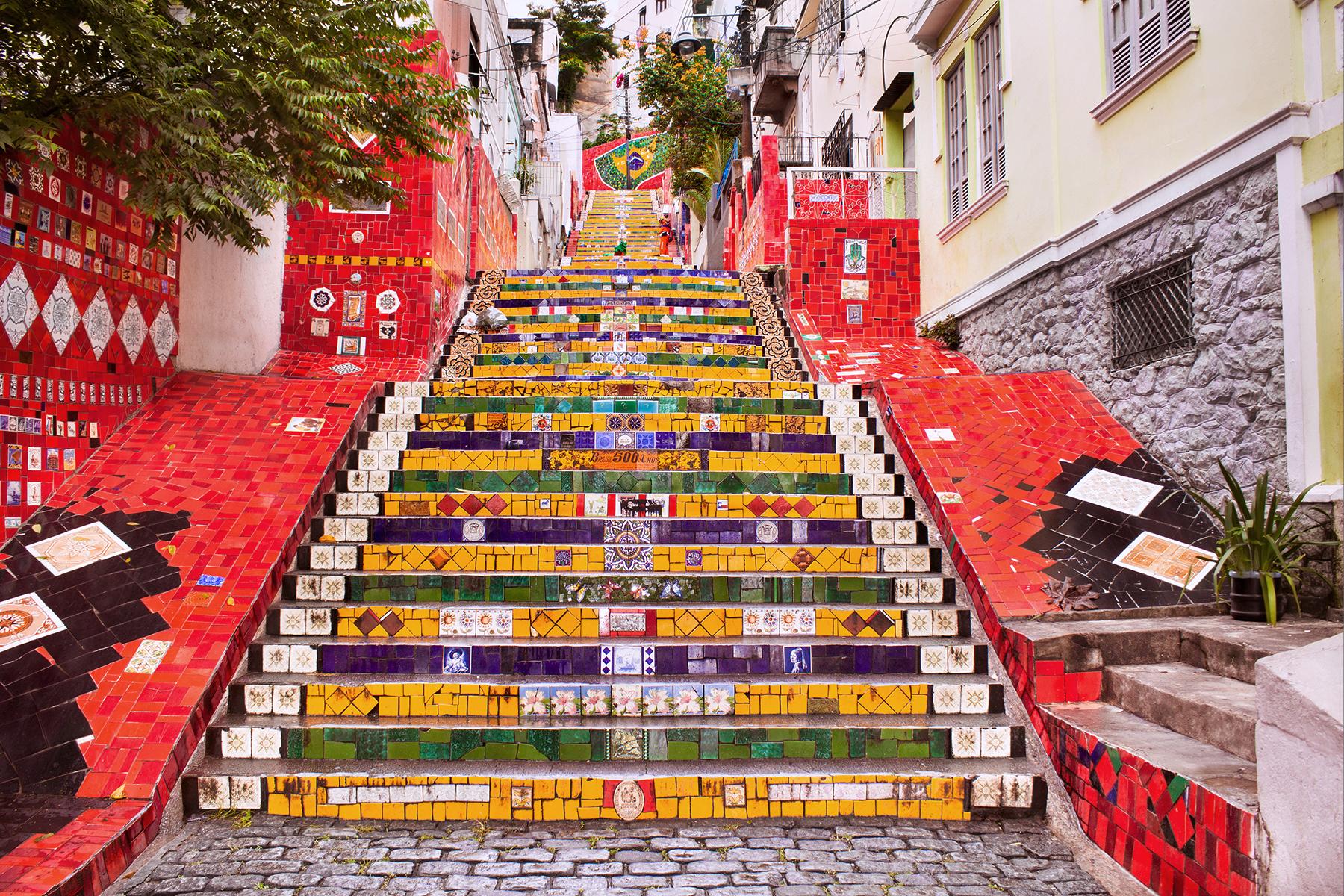 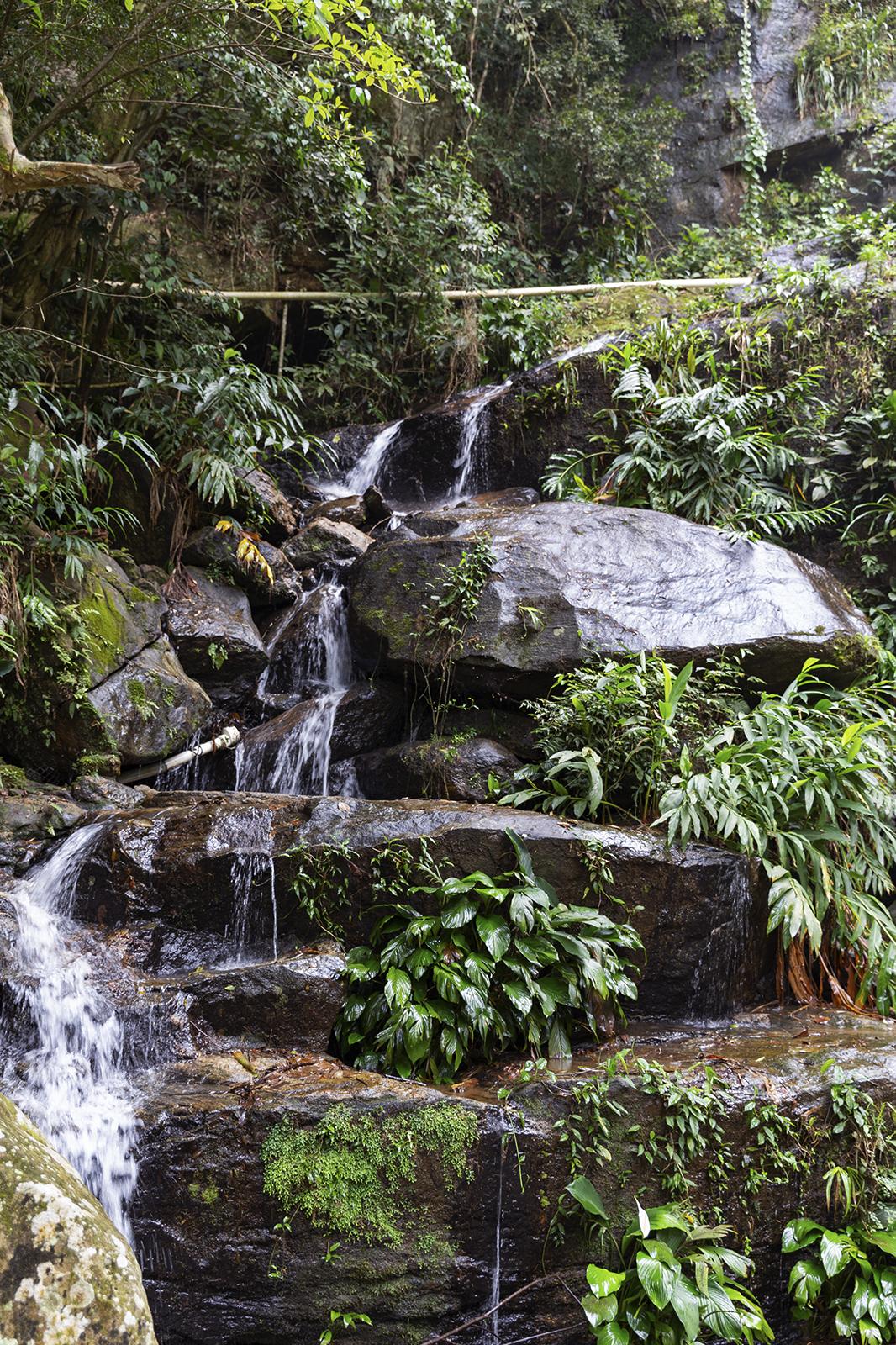 Between lunch and getting yourself to the airport, make sure to fit in a stop at the Selaron Steps. From 1990 until his death in 2013, the artist Jorge Selarón covered and re-covered 125 meters of steps in over 2,000 pieces of bright mosaic tiles. The ever-evolving steps consist mainly of blue, green, and yellow tiles for the Brazilian flag, but tiles from all over the world are now included as tourists began bringing them to Selarón once his project became famous.  Snap some pictures and head to the airport feeling inspired by the spirit of Rio de Janeiro. You’ll feel the effects for weeks to come.

Fly into RIOgaleão Tom Jobin International Airport directly from New York, Atlanta, Houston, Miami, or 22 of the other international locations offered. The airport is rapidly modernizing with most procedures automated with advanced technology. You’ll be in and out in no time with this insanely efficient airport.

For an iconic stay in Rio, rest your head at Hilton Copacabana. A historic property on the beach, each room comes with an ocean view and an outrageously big breakfast buffet with Brazilian and Continental favorites. Nothing will feel more luxurious than staying on the shores of Copacabana. For a journey into one of Rio’s newly hip neighborhoods, book a few nights at Hilton Barra. The new modern property located near the international airport, convention center, and Olympic Park is a great option if the beach is not your main plan for the trip. The sleek rooftop pool is a favorite hang out spot amongst the local neighbors and comes with a fantastic view.

December to March is peak tourist season due to warm weather and the draws of New Years Eve and Carnivale. If you seek to avoid crowds and subsequently higher prices, come during October-November. The weather will still be agreeable for the beach with far fewer crowds and party-seekers.