Climbing a staircase to nowhere.

Camping (in exceptional style) on the world’s largest salt flat—at once an endless sprawl of white terrain and a giant mirror stretching toward infinity.

These are the types of experiences you don’t expect to find outside the heavily dog-eared pages of adventure novels or the sepia-toned reels of swashbuckling serials. But with Kachi Lodge, such endeavors are regular features on guest itineraries.

Kachi Lodge is the first operation of its kind—permanent, luxury accommodations—located directly on the Salar de Uyuni, Bolivia’s famous Salt Flats. The camp, which was designed by Amazing Escapes, is made up of 5 private domes and one large “common area” dome and are outfitted with beautiful furnishings and art from Gastón Ugalde, Bolivia’s foremost contemporary artist.

In addition to the accommodations themselves, Kachi Lodge arranges for airport transfers, food, and the various activities guests partake in over their two night, three day stays. It’s an incredible thing to spend a day exploring a landscape that’s as beautiful as it is challenging and then night falls—yet the spell is unbroken. You don’t have to leave for your hotel, allowing the world outside of the Salar to fully encompass you. From the moment you watch the dawn creep up over the unchallenged expanse of the horizon you’re completely immersed in everything that is exciting and unique about the Uyuni Salt Flats.

CHAPTER I: THE STAIRWAY TO THE SKY

I don’t have any reason to be hallucinating. I’m well-hydrated and being transported from the small airport in the city of Uyuni across the Salt Flats to Kachi Lodge in the comfort of temperature-controlled SUV. And yet I can’t shake the sense that I’m looking at a mirage.

Because rising out of the long, long stretch of Salar is a staircase.

Within a few minutes, I’m standing about a story high, taking in a 360-degree view of the Salar from the top of the (very real) set of stairs. Their remote location and straightforward presentation evoke something ancient—you’d be forgiven for mistaking them for some kind of ruin at first blush. They are, in fact, an art installation courtesy of Gastón Ugalde. It’s a fitting first entry on our journey into the Salar. In being a stairway to nowhere, it becomes a stairway to everywhere, a stairway to the endless treasures to be discovered here. It’s a visual aperitif that primes you for the games of perspective that this environment has become famous for.

First, you see the volcano.

It’s appropriate that the boundless flatness of the Salar echoes the blank expanse of deep space exploration. You spend nearly an hour barreling across the smooth, white earth only for the dormant volcano, Tunupa, to appear on the horizon—like a once distant planet emerging out of the dark of space. It, at once, signals the end of one journey and the starting point of that’s just started to unfold.

Located just off the base of the volcano is Kachi Lodge—the NASA-worthy geodesic domes completing the interplanetary exploration vibe of the whole venture. Once we’ve arrived at the camp itself, it’s clear that the actual living areas are far more inviting than the Spartan conditions of astronauts. The furnishings are a mix of stylish and cozy, accented by the colorful pops of artwork (such as the photographs in each private room and the life-size llama that presides over the outdoor seating area) by Ugalde.

The interior of the private quarters is so thoughtfully designed with regard to comfort and aesthetics you’re quick to forget that you’re in the middle of the desert (seriously, I can’t remember the last time I went camping and had bed-side electrical outlets). They’re heated by a furnace that keeps the room toasty even as temperatures plummet at night, and a wide transparent section allows you to see the sunrise from where you’ve cocooned yourself in the lush bedding. 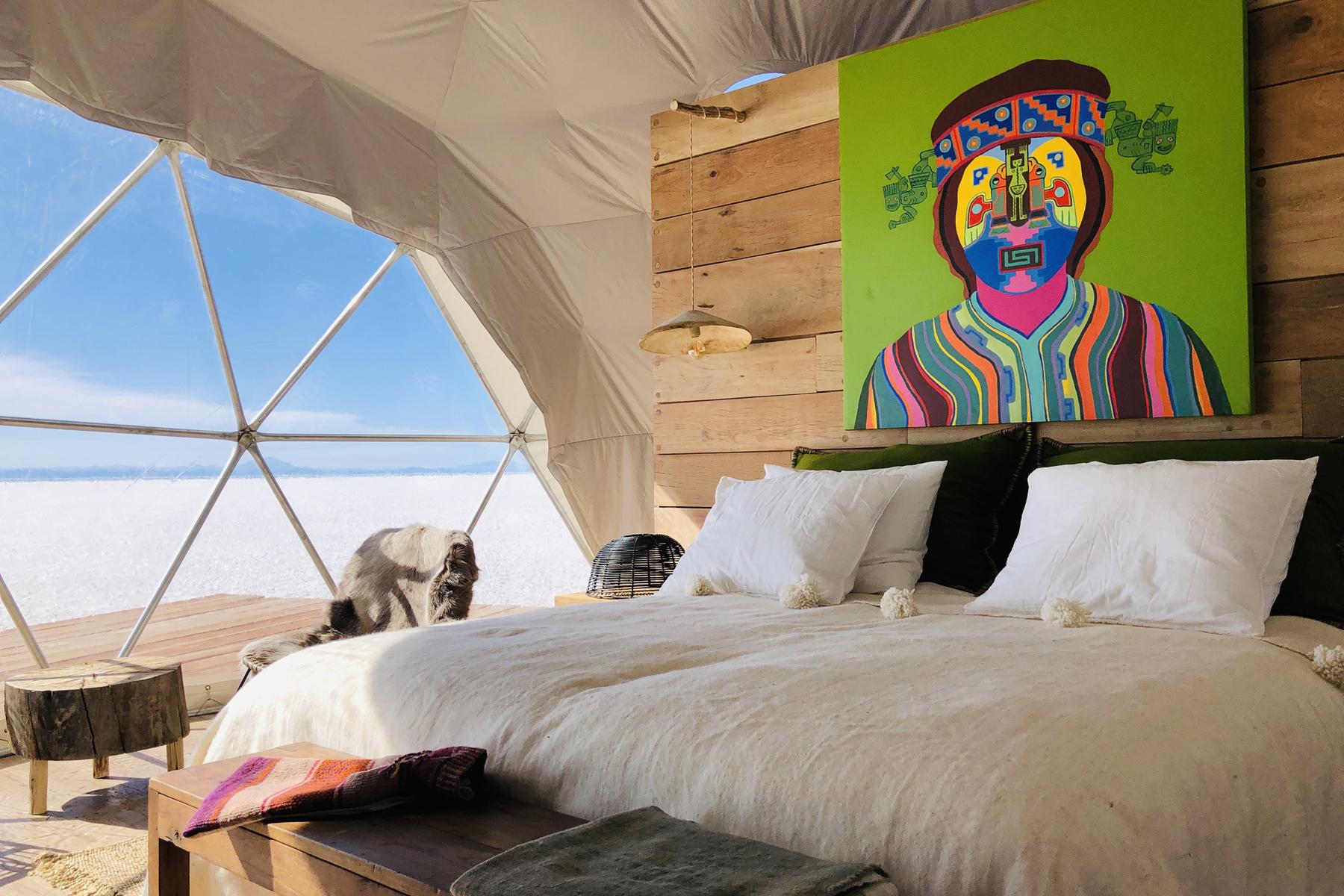 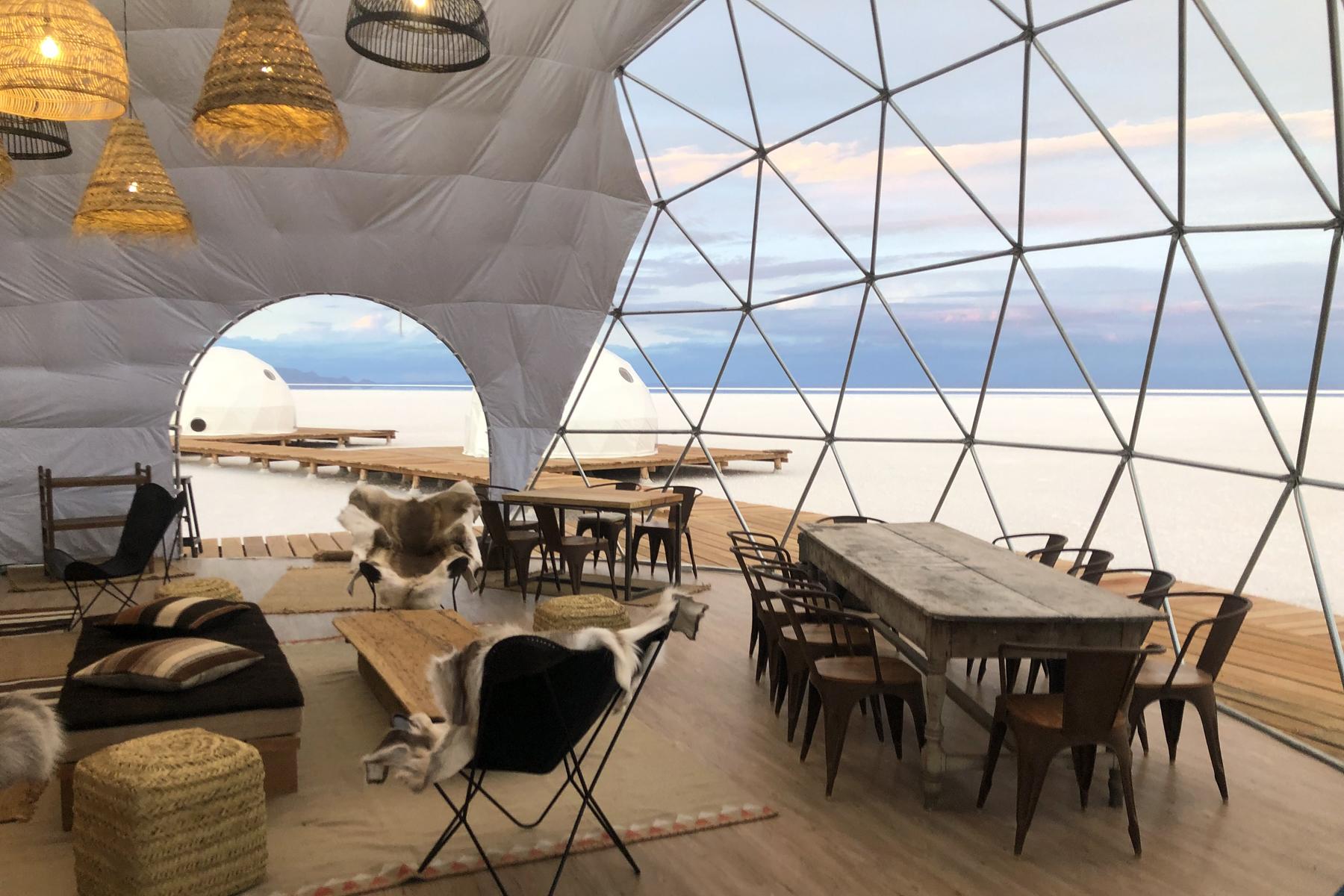 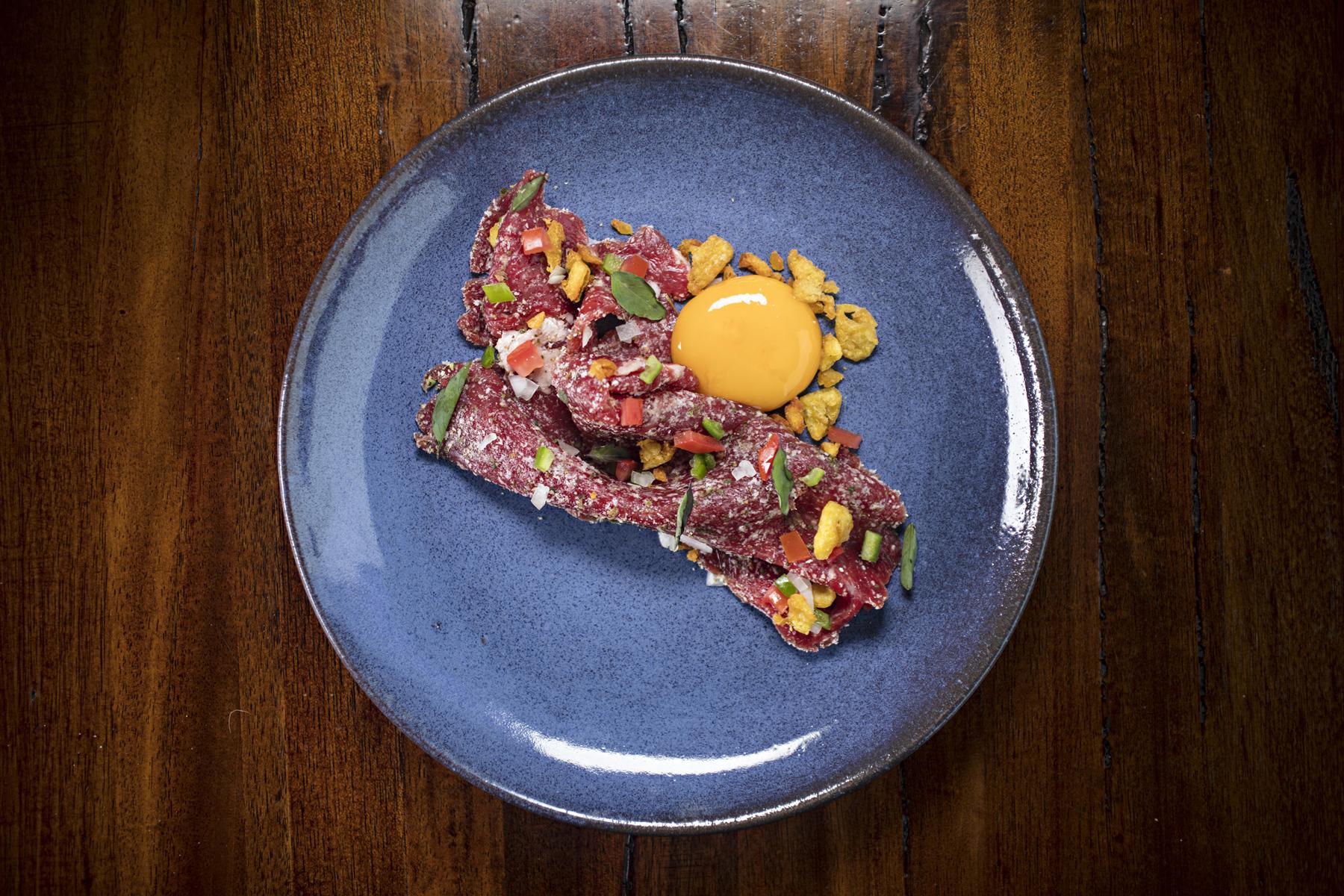 Rounding out the “glamour” part of glamping is the dining. The lunches and dinners held in the main dome are pre-ordained multicourse affairs that not only minimizes food waste but brings Bolivia’s finest restaurants all the way out to the Salar. Gustu, which was named one of the best restaurants in Latin America in 2017, is based in the city of La Paz but brings its creative takes on Bolivian cuisine to Kachi Lodge. (During my visit the food came courtesy of the excellent Nativa out of Sucre.)

INSIDER TIPThough the menus for the meals are fixed, accommodations can be made for visitors with dietary restrictions. Just make sure to put your request in ahead of time.

It’s quite the contrast to the challenging environment of the Salar, but there’s perhaps no greater comfort than knowing that whatever you get up to during the day you can come back to a real, hot shower. (Oh, yes, and a world-class dinner with wine pairing. That’s not too shabby either.)

I hadn’t been expecting to spend sunset sipping champagne on top of the world’s largest mirror. My visit to Kachi Lodge took place in late May, outside the window for the rainy season that turns the surface of the Salar into a gigantic mirror. But even though the majority of the landscape has dried out, it turns out that there are still large patches of water that have yet to recede. So after a short drive (during which we’ve been instructed to close our eyes), I find myself standing in the impossibly clear, impossibly still, ankle-deep water that creates the effect I’d only gotten a sense for in photos. 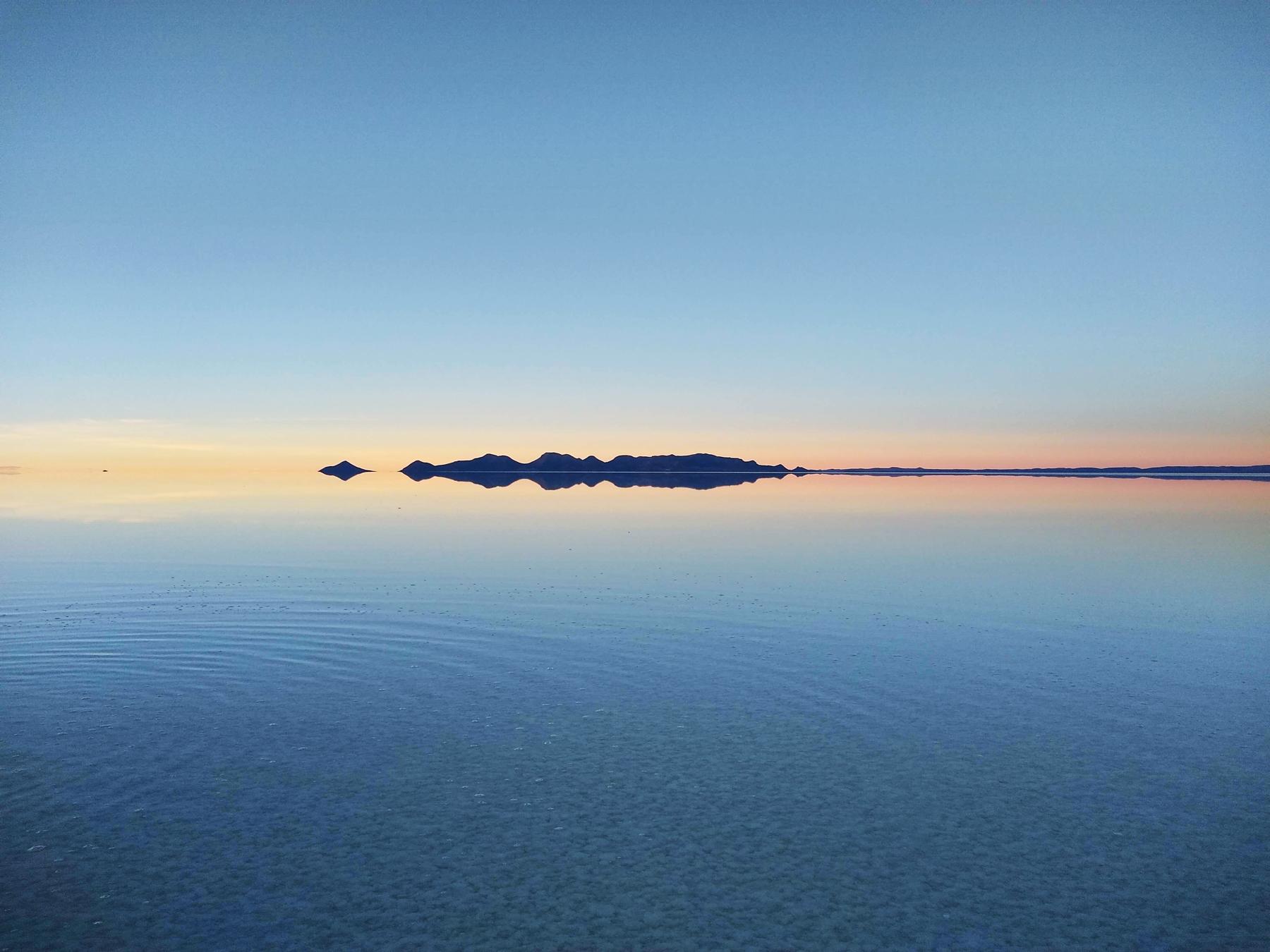 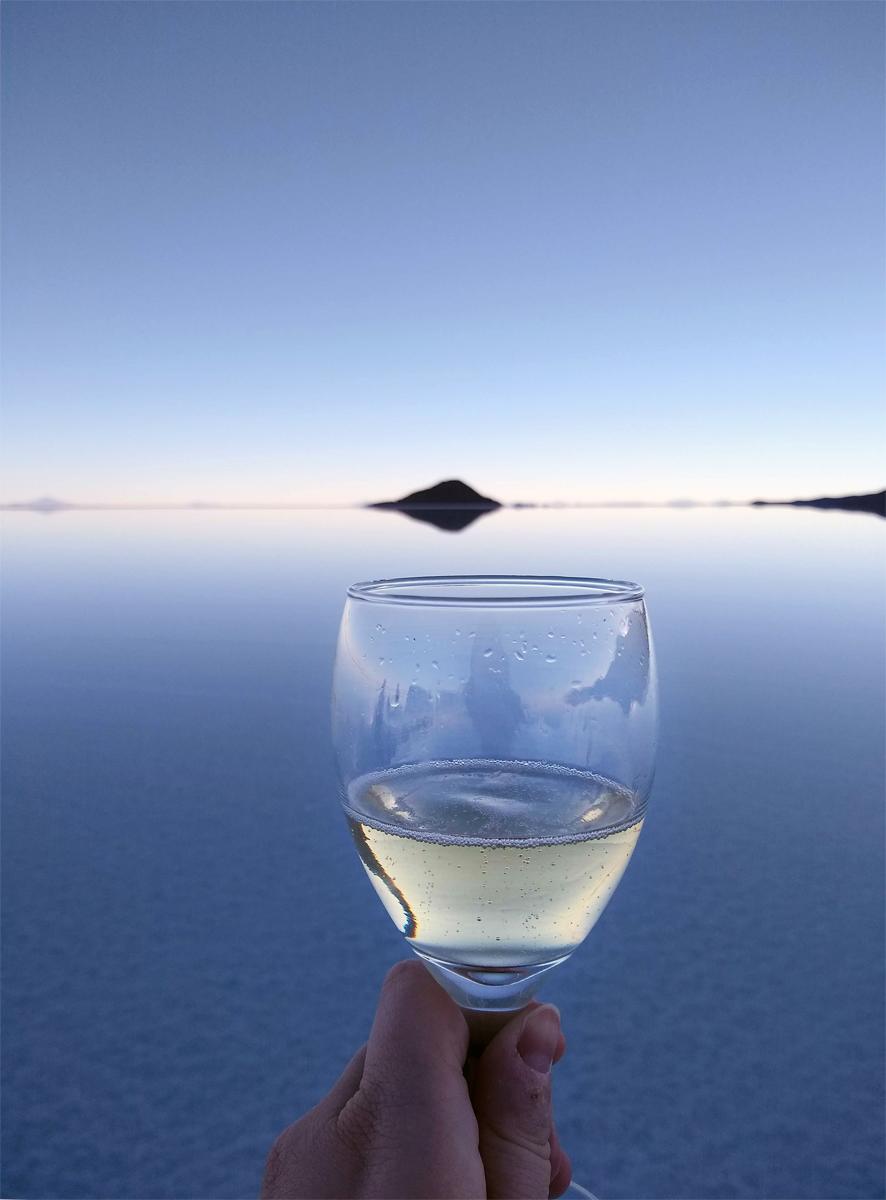 And there truly is no photo that can recreate seeing the gently extending gradient sunset reflected perfectly in every direction—soft magentas and violets blurring the place where the horizon meets the water, the only thing breaking the continual stretch of colors is the volcano and the “islands” in the distance. I’m standing in the middle of what feels like a miracle. Something that should be as infrequent a phenomenon as a total solar eclipse happens here with almost routine regularity. And here I am, watching as the moon appears alongside its faintly reflected twin, enjoying a glass of champagne as it happens.

CHAPTER IV: THE ISLAND OF THE GIANT CACTI

Scattered about the Salar are relatively small outcroppings of land that are simply referred to as islands. The Salar, once upon a prehistoric time, was actually a giant lake. Evidence of the Salar as it used to be can be found in the rocks that cover these islands which, aren’t rocks at all, really, but fossilized corral.

Perhaps the most popular of these sites is Isla Incahuasi which is famous for the plethora of gigantic cacti that dominate its landscape. One of the benefits of literally sleeping on the Salar is that we’re able to set out for Incahuasi almost immediately after breakfast—that means we’re able to climb to the top of the island long before the rest the crowds can arrive. It’s perhaps the only place we go where “beating the rush” is even part of the vocabulary. With its otherworldly, coral terrain, mammoth cactus guardians, and even a brief detour through a cave, simply walking the trail on Incahuasi feels like you’re exploring a place that had to be imagined. We twine our way through cacti that tower over every part of the island until we reach the top—a site where the local community holds a ceremony (typically in August, after the first rain) during which a llama is sacrificed as thanks to Pachamama. While stopped at the top of the island, the wind breezing past and the calm blue of the sky arching overhead, it’s easy to appreciate the unique quiet the Salar provides.

INSIDER TIPWhether or not certain activities are available is dependent on whether your visit is during the rainy or dry season. Such is the case with Incahuasi, which is inaccessible during the rainy season.

CHAPTER V: THE CITADEL OF THE MUMMIES

At the base of the Alcaya archaeological site is a solitary skull. The empty eye sockets and the rock on which it’s situated are adorned with coins—offerings from visitors.

It’s a precursor of what we’re about to find as we ascend the pre-Incan, stone citadel that weaves up into the hillside. Although this site isn’t only funerary it is without a doubt the main point of fascination. Because of the high altitude and arid environment on the Salar, the remains of the people that called this community home are remarkably well preserved.

As we walk across the main funerary site, we have to be careful to sidestep the flat stones that have been put in place to cover the openings of the tombs that hold the remains. I lean over to peer through the cracks. The remains here are skeletal (though you can glimpse a long braid in one tomb) and they’re accompanied by artifacts like ceramic pieces and colorful textiles that provide a window into the day-to-day life here centuries ago. 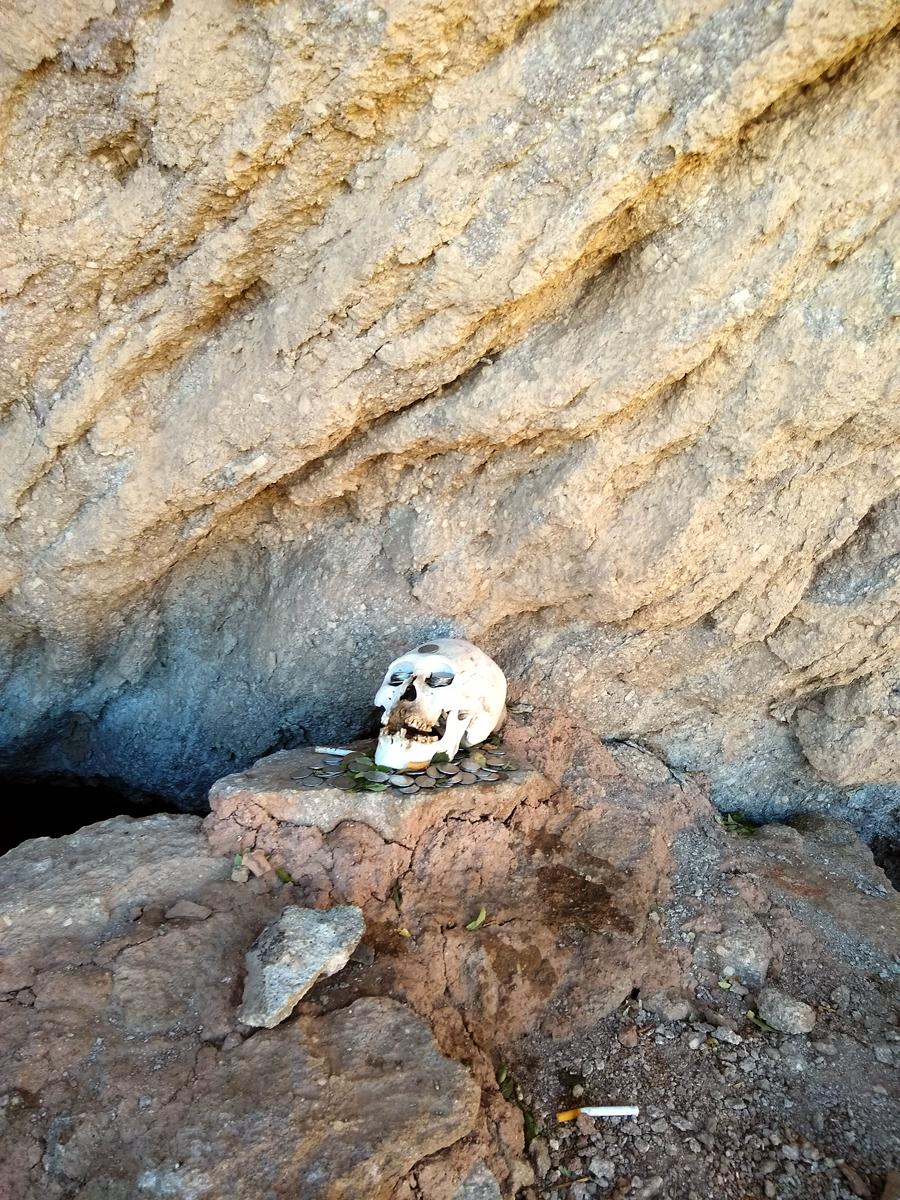 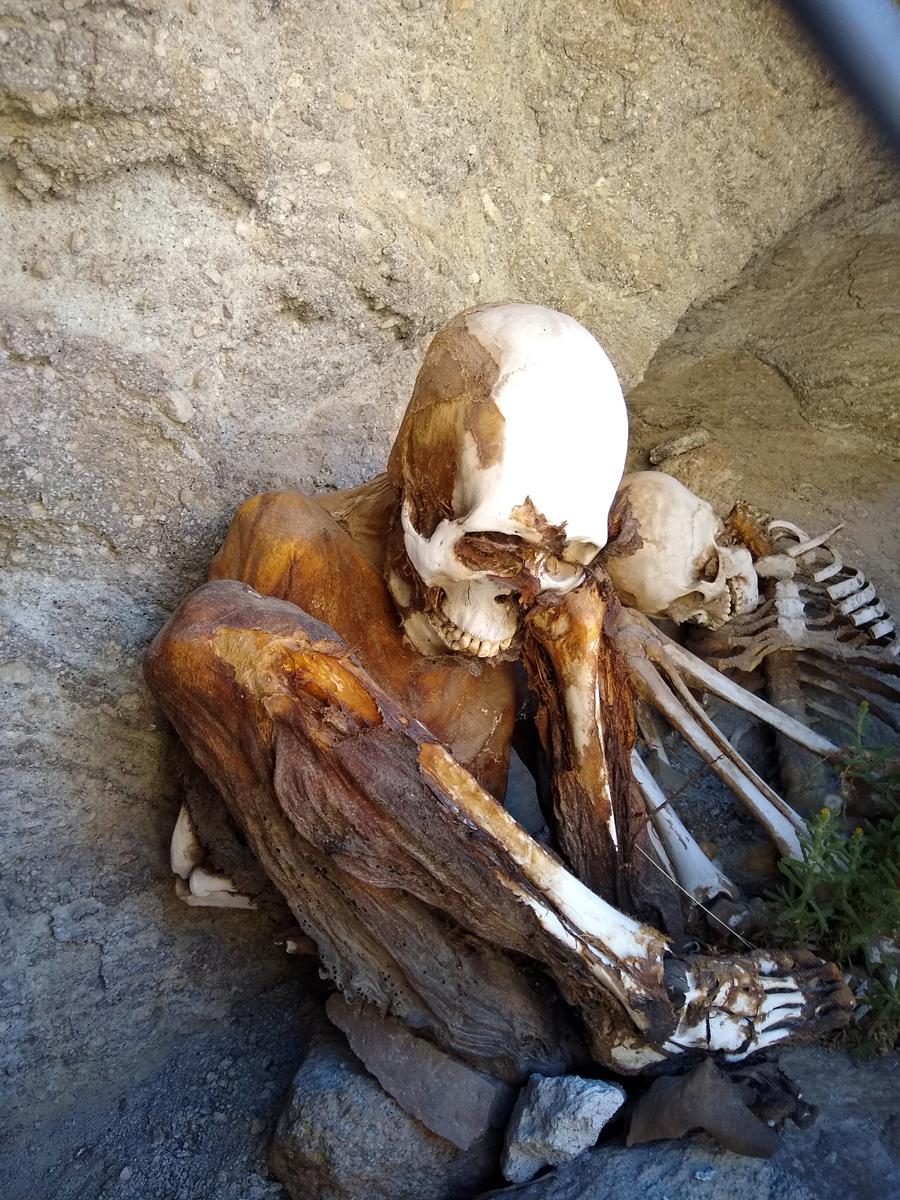 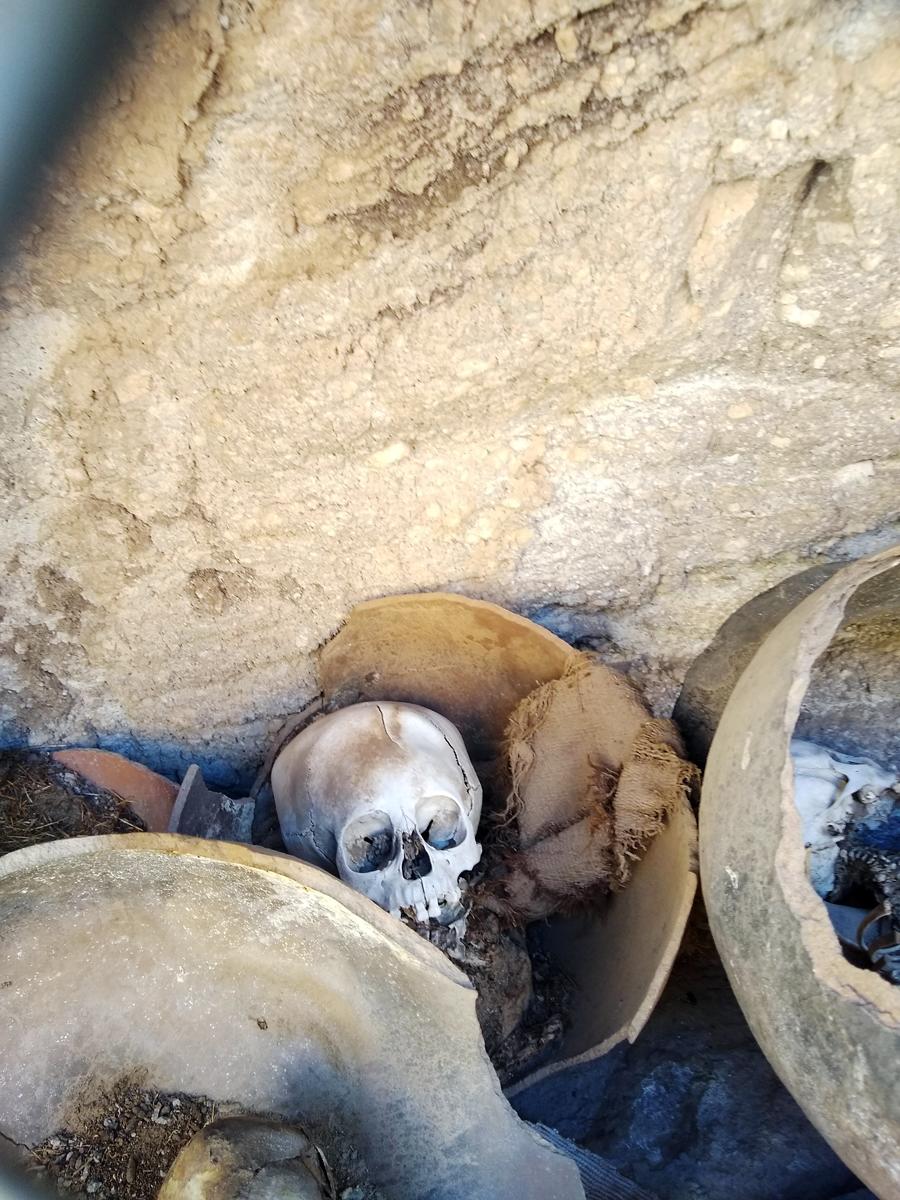 As we hike up through the citadel, making our way through the remains of homes, buildings, and spaces where ceremonies took place without encountering another soul, I can’t help but think of another South American citadel where every inch is crowded with visitors from dawn to dusk, and how similar tourist numbers here would mean queuing up to slowly shuffle through the citadel for the briefest of glances at the mummies. And yet it’s noon and while another car appears to have arrived since we started our climb, we have the place to ourselves. It’s not exactly the easiest place in the world to get to, but even so, it’s an incredible privilege to not only experience this site but essentially have it to yourself.

On our descent, there are several nooks (protected by chain-link barriers) where mummified remains can be viewed. Some aren’t completely skeletal and all of them are seated with their knees drawn up to their chest. The people that lived at this site believed that death was a rebirth, and so people were placed in the fetal position before being interred, allowing them to leave this life in the same way they entered it.

EPILOGUE: THE LAST SUNSET ON THE SALAR

There’s a part of the classic Hero’s Journey called “The Crossing of the Return Threshold.” It’s the point in the story where the hero, “after an experience of soul-satisfying vision fulfillment,” must return “to the world of common day and must accept it as real.”

It’s a little what it feels like when the time comes to “check out” and start the drive back to the Uyuni airport. Considering all the spectacular things I’ve seen, the unfathomable places I’ve been, how am I supposed to go back to a world where my daily routine has yet to include exploring remote islands made of fossilized coral even once!

But it turns out the Salar has one last gift. It’s late afternoon and the sun is rapidly setting. In what feels like no time at all the white of the flats have been drenched in pink. When the sky does turn dark, a gigantic, beautiful moon rises. It’s a spectacular coda worthy of an adventure on the Salar de Uyuni.