When I touched down in La Paz, Bolivia, I knew I had to do at least one thing: mountain bike down the infamous “Death Road”.

I’m all about adventure sports and adrenaline pumping activities. I’ve gone skydiving twice, bungee jumped from 425 feet, and screamed so loud on a canyon swing that the whole of South Africa could hear me. I was even a platform diver in college! But nothing, I mean NOTHING could prepare me to ride down Death Road in Bolivia.

First, let’s get some facts. Death Road, aka Yungas Road, is a 43-mile-long stretch of winding road through the Cordillera Oriental mountain chain. The road was constructed in the 1930s by Paraguayan prisoners during the Chaco War, according to La Paz Life. The road climbs to 15,260 feet above sea level at La Cumbre Pass. Then, it’s a continuous downward stretch toward the Amazon rainforest. If you look off the side of the road, you’re looking down at a 2,000-foot drop into the surrounding forest. Yikes. The road links La Paz with Coroico, a small town at the entrance of the Amazon rainforest.

The difference between this and other adrenaline-pumping activities is that Death Road is a five-hour ordeal. During this mountain biking tour, I had hours to think. And thinking makes the fear stronger.

In case the name doesn’t give it away, Death Road got its name because of its high death rate. There are reports that nearly 300 people were killed on this road every year until 1994. A year later, the Inter-American Development Bank declared it the “World’s Most Dangerous Road.” There are no guard rails, visibility is limited, and the weather is consistently rainy along Yungas Road—a recipe for hazardous conditions.

For some wild reason, Yungas Road became a tourist attraction. The first mountain biking tour popped up in 1998 and now there are multiple tour companies offering the thrill of riding down Death Road. Unfortunately, at least 13 riders have died in accidents since 1998, according to some reports. As of 2007, a new, safe route was built for traffic. So now, Death Road is only busy with bikers, tour buses, vans, and adventure tourists like me.

I had that uneasy feeling of knots in my stomach after reading through the possible risks one could encounter on Death Road. The most obvious one bolded in neon lights: Death. I’ve been through these life signing contracts before, but this one made me particularly nervous. Maybe it was because I knew there had been a recent fatality on the road. Although, I try not to let those stories scare me away from participating in life.

The next morning, I hopped into a van with 20 strangers who had also signed their life away and drove to the starting point of the tour: La Cumbre Pass. We were fed breakfast, fitted in our gear, and matched with a bike according to our size. I felt protected in the gear they gave us, which included a helmet, layers of long sleeves, and a heavy jumpsuit that I couldn’t move in. I looked like the Michelin Man and I was ready to go.

The first chunk of the road is pavement. In my head, I was thinking about how easy this ride was! The sun was shining, the road was smooth, and I was gliding down the asphalt. Little did I know it was just the warm-up…

After a brief ride along this tranquil paved road, our group stopped to take a bathroom break. Then, we hopped in a van (there were two vans with us at all times, one at the front of the group, one at the back) which drove us 15 minutes uphill through the mountains, where the setting changed drastically. It was colder up here and we seemed to be above the clouds. The sky was cloaked in a dark grey haze. It was eerie. 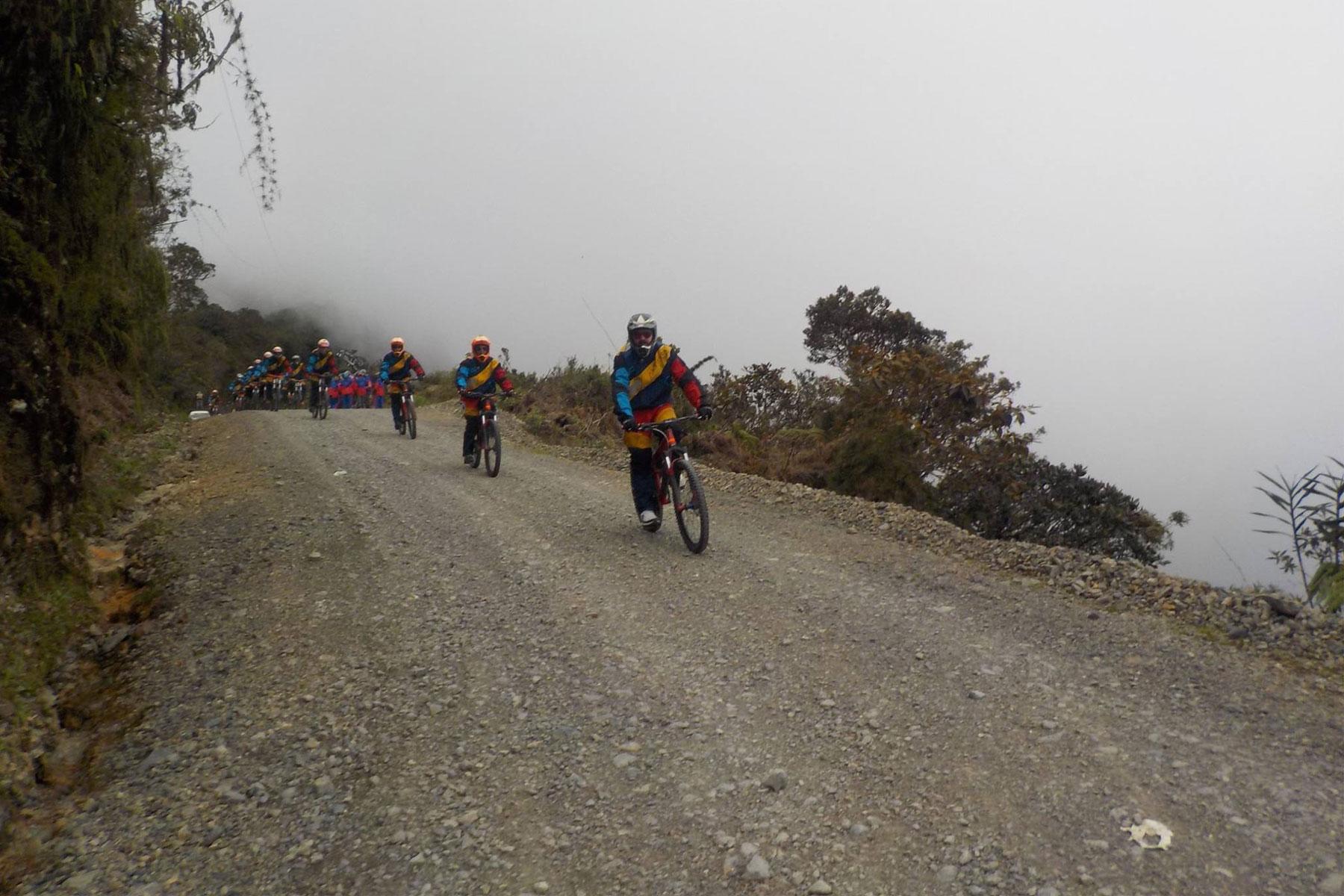 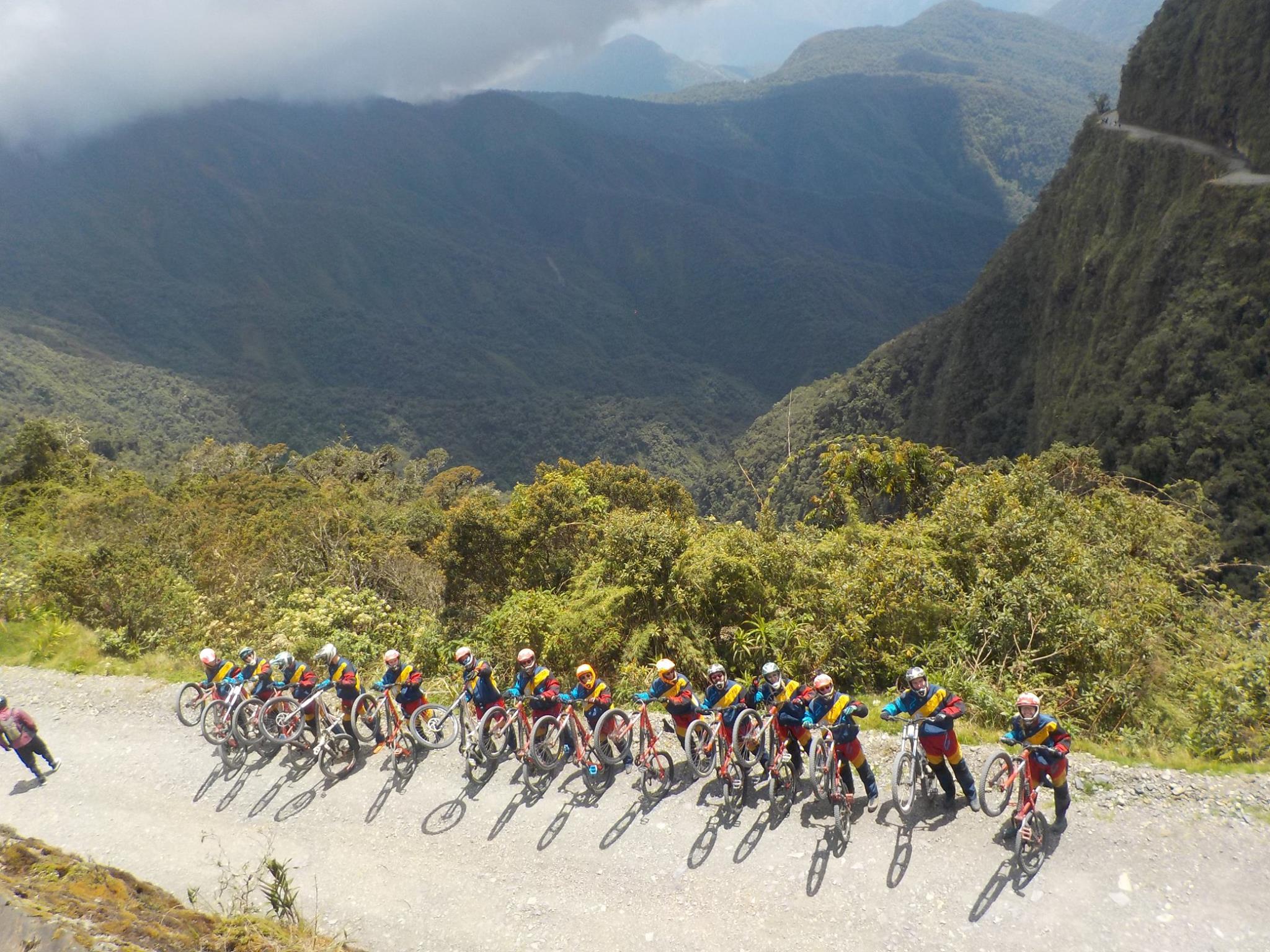 The road wasn’t paved anymore. Instead, it was replaced with thick gravel along a 10-foot wide road filled with hairpin turns and no guard rails. When I dared to look over the edge, I was looking at a 2,000-foot vertical drop down the mountain. I was officially terrified.

My bike didn’t seem to like the new environment. Once I got going, the gears got stuck in first and I couldn’t keep up with the group. Luckily, the tour came prepared with an extra bike in case situations like this happened. So I jumped on a new bike and kept going.

A cloud of fog constantly sat a few feet ahead of me and a heavy rain began to pour. It was difficult to tell when there was a turn or if another rider stopped ahead of me. I didn’t feel like I was in control. I gripped the handlebar for dear life, giving a whole new meaning to the term “white knuckling.”

INSIDER TIPWhen searching for Death Road tour companies, choose the one with the best safety rating.

Our tour group stopped for pictures along the way, and I couldn’t help but feel like it was a paper trail of when I was alive at certain points of the tour. Every time we stopped, I had to forcibly release my grip from the handlebars and take deep breaths. The difference between this and other adrenaline-pumping activities is that Death Road is a five-hour ordeal, whereas something like skydiving is over within a few seconds. During this mountain biking tour, I had hours to think. And thinking makes the fear stronger.

I finally had a good thing going with my confidence when my pedal fell off as I was coming around a rocky, hairpin curve. I stumbled and skid across the gravel road. I laid on the rough surface for a few seconds, mostly crapping myself and thinking about how I just wanted to go home. When I stood up, I realized how close I was to the edge and my heart leapt to my throat.

This adventure officially got the best of me. I didn’t know what to do with a broken pedal. The tour company exhausted its limit of spare bikes as I wasn’t the only one to experience mechanical issues along the way. I started walking the bike along the road as other riders zoomed past me. A group leader saw me struggle and (very generously) gave me his own bike to ride. I rode the last six miles with my hands clamped on the brakes.

At the end of the tour, I found that I wasn’t the only one who had a hair-raising experience. One guy hit a rock and was flung over the handlebars—he had to get stitches for a deep cut on his leg. My partner’s tires went flat and his breaks stopped working–luckily, he’s an experienced mountain biker and was able to make it safely to Coroico.

Regardless of maintenance issues, Death Road, itself, proved to me how it got its name. A narrow road above the clouds not supported with guard rails is an attraction that makes you proud to say you braved the world’s more dangerous road.

The tour company gave me a T-shirt at the end of the tour that read “I survived Death Road.” I didn’t take it off for several days.