While the western half of the United States often gets credited with having the country's best ski resorts, the East Coast has no shortage of mountains where skiers and snowboarders can hit the slopes. Throughout New England and the Mid-Atlantic, dozens of ski resorts can be found in states like New York, Pennsylvania, Maine, New Hampshire, and most notably, Vermont, which reigns supreme. With 43 Nordic (cross-country) and Alpine (downhill) resorts, the Green Mountain State offers more ski areas than any other in the region, featuring a wide variety of resorts that appeal to every ski level and traveler type.

There’s another reason Vermont should be on your ski-resort radar: The 2014–15 season may very well be among the best the state has seen. That’s because many resorts significantly upgraded their snowmaking capabilities in 2014 as part of a $15 million statewide program that replaced many outdated snow guns with new, low-energy models. Promising to expand the efficiency and coverage of resorts’ snowmaking efforts, which help keep trails open even when the weather doesn’t cooperate, these new machines also aim to improve the quality of snow surfaces and extend the ski season. Below you’ll find need-to-know information on eight of Vermont’s best ski resorts, so you can decide which location is right for you. 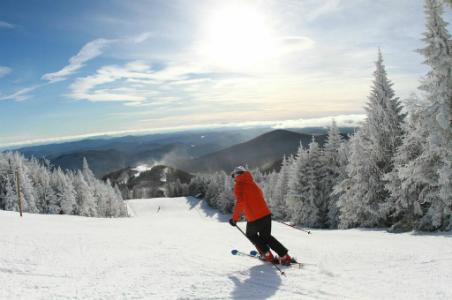 Rightfully nicknamed “the Beast of the East,” Killington stands out with its superlatives: the highest skiing elevation in Vermont (4,241 feet at the summit of Killington Peak), the largest vertical drop in New England (3,050 feet), the longest ski season in the Eastern U.S. (usually late October/early November through mid-May), and the largest skiable area in the East (1,509 acres). Comprised of six mountain areas (a seventh, Pico Mountain, is technically connected, but operates as a separate resort), Killington has 155 downhill trails, which are roughly divided equally between beginner, intermediate, and expert levels. You’ll find the longest trail in the Eastern U.S. here: Juggernaut, a green run that measures 6.2 miles. The resort also features six terrain parks for snowboarders and freeskiers.

Though it’s popular with experts, Killington is also a great resort for novices, as it features new terrain-based learning areas and offers lesson packages that include a free snowboard or pair of skis. No matter what your level—and even if you don’t participate in snow sports at all—be sure to stop in for lunch or a drink at the Peak Lodge; located atop Killington Peak, it promises breathtaking views of five states, Canada, and three mountain ranges through floor-to-ceiling windows. Killington loyalists also know how to party, as anyone who’s experienced the access-road nightlife can attest. 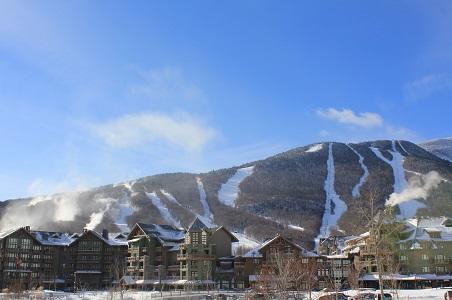 Located between Burlington and Montpelier, the town and ski resort of Stowe is actually comprised of two mountain areas, Mansfield and Spruce Peak. The mountains boast a combined 116 trails, more than half of which are graded at an intermediate difficulty level; only 16% of the trails are greens, making Stowe a better option for experienced skier and riders. The resort also has six freestyle terrain parks for adventure-seekers. For cross-country skiers, Stowe offers four interconnecting areas with a combined 90 miles of groomed trails that wind their way through the town.

Stowe’s allure can also be found away from the mountains: The town is idyllic in appearance, and Main Street is folksy and postcard-perfect. It’s also become a place to dip into luxury. Six-story Stowe Mountain Lodge, at the base of Spruce Peak, simultaneously manages to be one of the greenest and poshest mountainside lodgings in the world (enjoy that complimentary access to a Mercedes-Benz!), while Topnotch Resort offers relaxation and spa treatments a few miles from the ski resort. And, of course, there’s the lively après-ski scene, which kicks off as early as 2 pm on weekends. 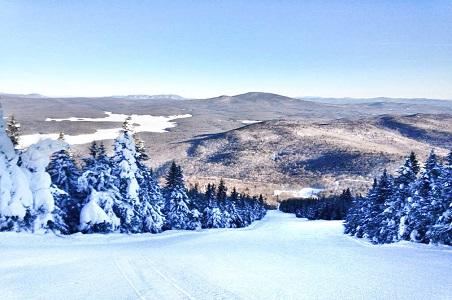 Located in the gorgeous Green Mountain National Forest, Mount Snow has the distinction of being Vermont’s closest large-scale ski resort to major metropolitan areas in the region (2.5 hours from Boston, 4 hours from New York City). Its four mountain areas (Main Face, North Face, Carinthia, and Sunbrook) feature 80 trails, nearly three-quarters of which are blue runs. That shouldn’t discourage beginners, though, because Main Face has some fun green runs that go from the 3,600-foot summit all the way to the bottom. North Face, meanwhile, features the most advance terrain, including tree-skiing areas and the double-black-diamond trail Ripcord.

Mount Snow’s most unique feature, however, is Carinthia, an entire mountain face dedicated to terrain parks; it's the only one of its kind on the East Coast. Spread over 100 acres, the 12 parks here feature rails, jumps, and a superpipe, making it an ideal place for snowboarders.

Also of note: The resort is home to the Bluebird Express, the first six-passenger bubble chairlift in the East, which cuts down on wait times for getting to the summit. Mount Snow also has one of the best snowmaking systems in the mountain-resort industry, having invested more than $25 million in enhancements since 2007, including the installation of more than 250 high-output fan guns (the most of any North American resort) and, in 2014 alone, the addition of 645 new low-energy snow guns. 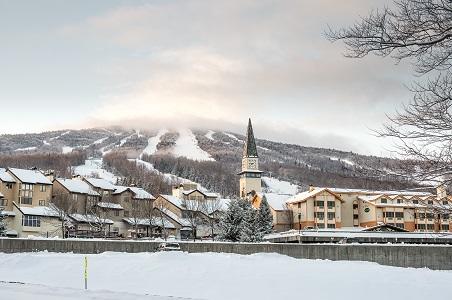 Just north of Mount Snow lies sophisticated Stratton, which SKI Magazine readers have ranked in the top 10 resorts for snow, grooming, lifts, terrain parks, service, lodging, on-mountain food, dining options, and après-ski/nightlife. Clearly, this is a resort with something for everyone to enjoy, including shopping, both in the village and in nearby Manchester. Home to the tallest peak in southern Vermont (at 3,875 feet), Stratton has 97 trails spread over 670 acres, with 160 acres of gladed terrain. The trail breakdown—40% novice, 35% intermediate, 25% advanced—favors nonexperts, but thrill-seekers have plenty of black and double-black trails to choose from, plus six terrain parks.

Stratton prides itself on its immaculate grooming and also its lifts, which make up the fastest fleet at any resort in the East. If you prefer to stay off the slopes, there are 11 miles of cross-country trails to tackle, as well. The resort’s sports center, open year-round, has a 25-meter indoor pool, hot tub, steam room, and a fitness facility. 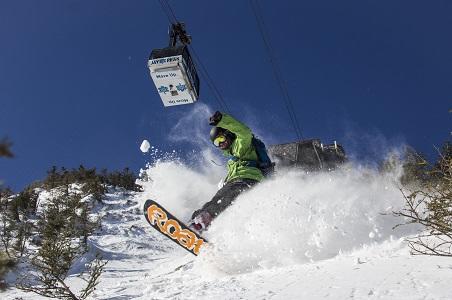 Four miles from the Canadian border sits Jay Peak, which sees an average of 380 inches of snow annually, more than any other ski area in the Eastern U.S. Accordingly, it's renowned for its powder, especially since some skiers complain about a lack of fresh snow at other resorts in the state. Jay Peak is also home to the state’s only aerial tram, which transports up to 60 people from the base to the summit in just seven minutes. Two interconnected mountains make up the resort, which offers 78 trails on 385 acres of skiable terrain, more than 100 of which are backcountry terrain. One-fifth of the trails are beginner-level, with the remainder evenly split between intermediate- and expert-level runs. There are additionally four terrain parks, each rated for different abilities, and 12 miles of groomed trails for cross-country skiers.

Hundreds of millions of dollars have been poured into resort improvements over the past five years, reflected in the gleaming slope-side amenities. In addition to three new hotels, recent additions include more restaurants; an ice arena for hockey, figure skating, and curling; and an indoor water park (maintained at a balmy 80 degrees), where you can learn to surf. 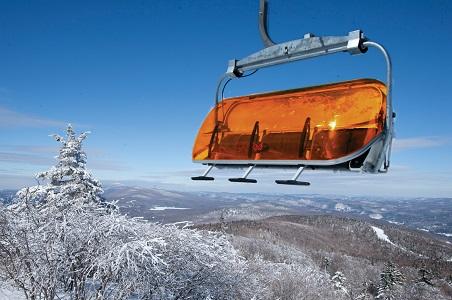 While many resorts are owned by large corporations, Okemo has been family-run since 1982. At 2,200 feet, it sports the largest vertical drop in southern Vermont, with 120 trails spread across 644 acres on four mountain areas. Trail difficulty is almost evenly divided between novice, intermediate, and advanced, but winding, rolling blue runs are the resort’s specialty. The mountain may lack the white-knuckle difficulty of nearby Killington, but there’s a laid-back appeal in Okemo’s cruisers, which are known for being particularly well-groomed.

This season, Okemo installed a new, six-person bubble chairlift with heated seats, making it quite possibly the warmest lift in the United States. Popular with families, the resort regularly receives high rankings in various magazines’ reader surveys for family-friendly resorts and kid-focused activities. Okemo offers multiple terrain parks for all skill levels, including the longest superpipe (500 feet) in the East. The resort also has 13 miles of groomed trails for cross-country skiers and snowshoers.

There’s a good deal of fun to be had off the slopes, too: The Adventure Zone offers activities like snowcat excursions and a mountain coaster, while the Spring House has a sauna and family pools with slides. 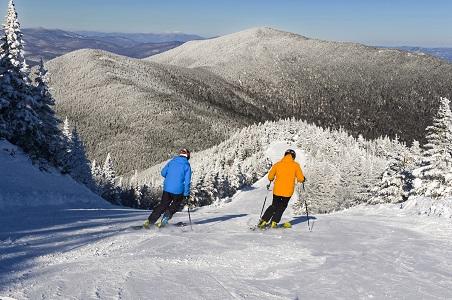 Better known as Smuggs, Stowe-adjacent Smuggler’s Notch takes its name from a narrow mountain pass that was once used by smugglers to transport illegal and embargoed goods across the Canadian border. With three mountain areas, the resort has 78 runs, half of which are designated blue trails. Smuggs is considered Vermont’s best family resort—SKI Magazine’s readers ranked it “#1 Kid-Friendly Resort in the East” for this season—but there’s more to it than that. For one, Madonna Mountain boasts some of the most challenging trails in New England, including Vermont’s only triple-black-diamond run, Black Hole. There are more than 1,000 acres of skiable terrain here, including wooded glades, in addition to six terrain parks spread across all three mountains. For cross-country skiers, Smuggs offers 18 miles of trails.

Still, it’s the family fun that keeps visitors coming back year after year. Evening torchlight parades and fireworks are among the highlight of any family’s stay, while zip-line canopy tours and nature snowshoe walks offer alternatives to downhill adventures. Kids also love the FunZone, a recreation center where they can play video games, run an obstacle course, and more. 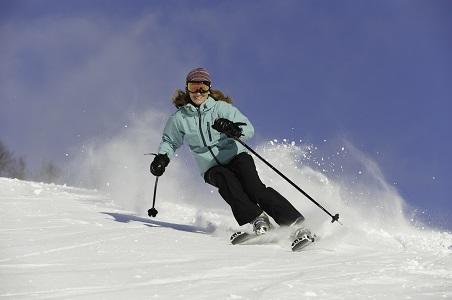 Known as “The Sun Mountain,” Bromley is New England’s only major ski area with south-facing trails, offering visitors warm winter days, glorious spring skiing, and the coveted goggle tan. Located 20 minutes from Stratton, this resort is on the smaller side—46 trails, almost evenly divided between greens, blues, and blacks—but that makes it perfect for families, since all the slopes lead toward a central base area that makes meeting up easier here than at bigger mountains. SKI Magazine readers also ranked Bromley third for kid-friendly activities in 2015, thanks in part to the resort’s specialized lessons and packages for young skiers and snowboarders. (Bromley was also ranked in the top 10 for service and value.)

No matter what your age, the terrain-based learning area offers a superior way to navigate the slopes for the first time. Bromley has three terrain parks (one for each skill level), plus a dedicated kids-only terrain park that’s staffed and supervised by ski and snowboard instructors.

For more information on all of Vermont’s ski resorts, visit Ski Vermont, which features extensive write-ups on every property, up-to-the-minute snow conditions, and a resort-finding tool that can help narrow your search to the best mountains for you.