Travel back in time to hang out with some of America's most extra citizens.

Once upon a time, long before Snooki and The Situation put the Jersey Shore on the map, or Andy Cohen put his first Real Housewife on TV, another town’s residents got publicly drunk, flung tables, broke the law, and generally extra’d their way to international fame. That was 150 years ago, and they’re still at it today—a concept so wild that members of the press were invited to check out the home town of some of America’s first reality stars to see their big-screen debut.

Before you head to Deadwood, South Dakota, it helps to have a little background info. The best way to get it is to watch its eponymous HBO show (which, by the way, NPR, Vox, The Guardian and this one guy on Rotten Tomatoes all called “the best TV show ever made,” so you should really give it a Prime Video). If you can’t fit a binge into your schedule, it suffices to know that Deadwood was the Silicon Valley of its day, just rich on gold rush not tech bubble money. And, because law enforcement was still in its infancy in the Wild West, the town proved attractive to outlaws (as opposed of tech douches). They came to rob local gold miners (easier than mining), party hard, visit the local brothels, and see who was the fastest, most infamous gun in the West.

Two of the gunslingers were gender-bending, foul-mouthed Calamity Jane and the love of her life, quick-draw Wild Bill Hickock. Between them, they killed hundreds of men in shootouts (one of the quickest ways to fame in the Wild West) and Wild Bill once killed a bear with his bare hands and a bowie knife. Or, so they said. They were both notorious fibbers who exaggerated their personal brands to magazine writers covering Deadwood until a Harper’s Weekly article rocketed them to international fame which, in a world of viral reality stars and only technically un-scripted “reality” TV shows, is pretty relatable.

People around the world knew their names, read about the brothels they frequented, and the shootouts they’d had. And now, I’m here to watch their (only slightly fictionalized) characters on the big screen in the 2019 film Deadwood: The Movie, in the town that’s suspended in the heyday of their residents’ peak shenanigans. 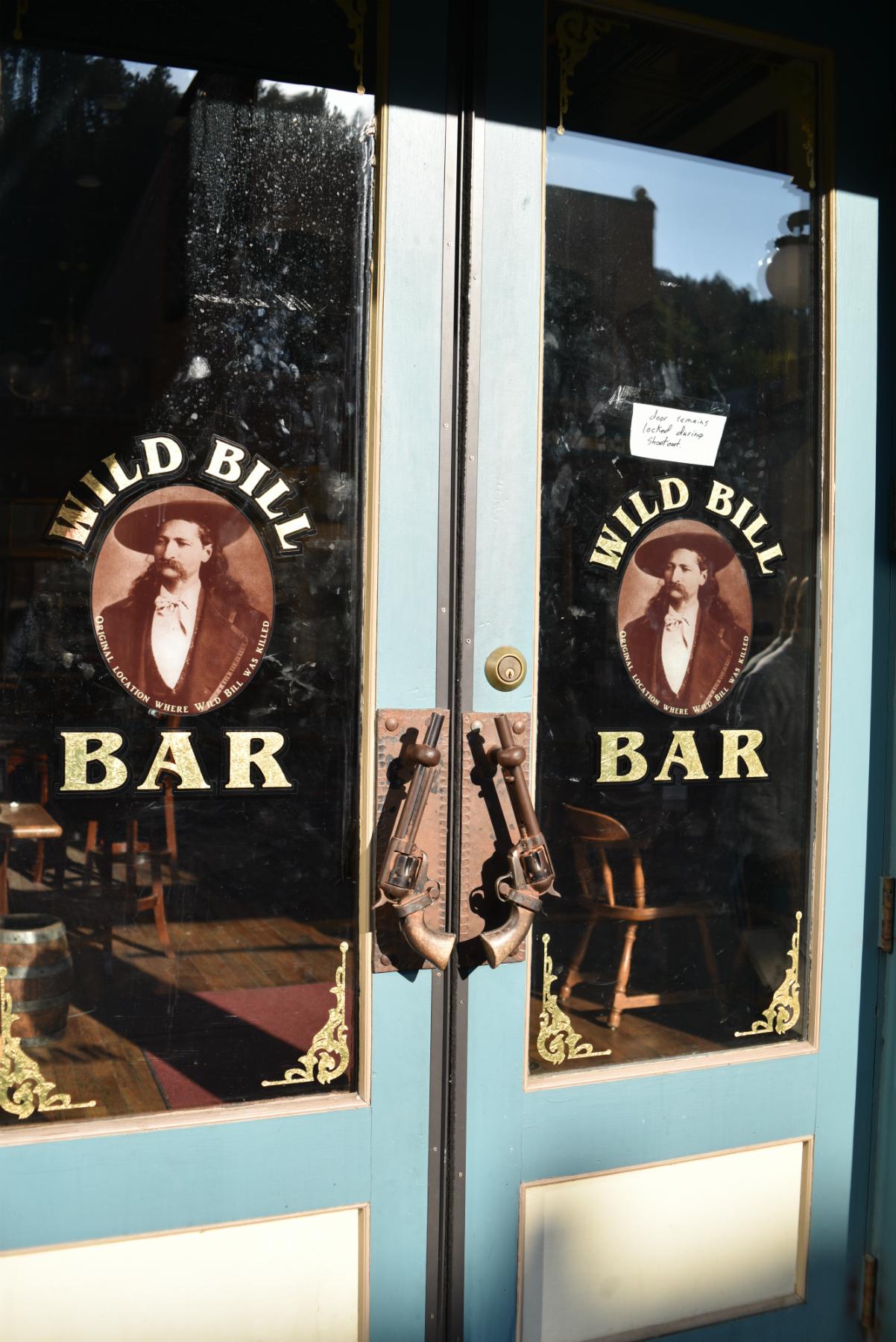 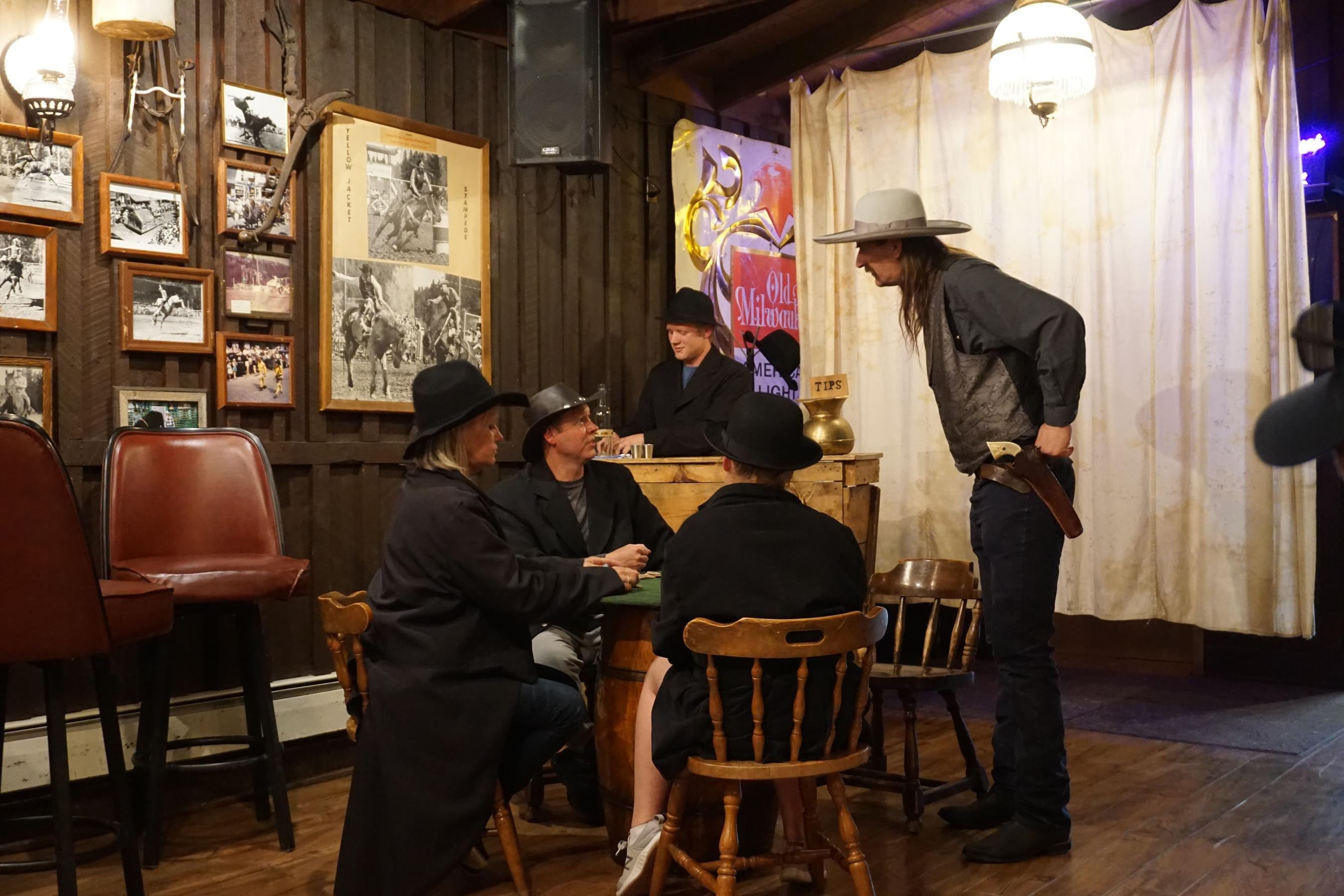 At the bar where I have my first beer in Deadwood—most of the establishments in Historic Deadwood, it’s worth mentioning, are bars—Wild Bill Hickock has just been shot in the head for the fourth time today. A little later, his murderer, locally referred to as The Coward Jack McCall, will be dragged into the street and tried for his crimes with plenty of crowd participation by kids, international tourists, a few locals and me, after I finish my beer, brewed in the style of the 1870s especially for this bar which Wild Bill was really shot in in 1876.

Most of the most extra scenes in the lives of the stars of the Wild West who lived here are reenacted daily, on schedule, among the original buildings of 19th-century Deadwood. Watching people enjoy the reenactment of a famous murder at 1:00 pm, 3:00 pm, 5:00 pm, and 7:00 pm in the bar where it actually happened is both the weirdest and coolest thing I’ve ever experienced.

And everything here is just as legendary as the tall tales that made it famous. Think Colonial Williamsburg, but with more reenactments of shootouts, booze, casinos, novelty t-shirt shops, bikers, and locals who know Deadwood’s outlaw history inside and out and live their best version of it in 2019.

“Welcome to f—in’ Deadwood” is the local greeting, and on the balcony of the Deadwood Grand, a sprawling property that’s part casino, part hotel, and part concert venue (3 Doors Down, Cheech and Chong, and Dwight Yoakum are all slated to play here later this year), I hear it several times as we all take advantage of the heavy pours at the open bar while waiting for the movie to start. When it does, we all agree that the movie itself was violent and heartbreaking and beautiful, just like the series which, was kind of a bummer.

The greatest gift that that terrible Game of Thrones finale gave to fans was to cure us of the grief that comes with watching one of your favorite shows end forever. We all walked out of the dark theater still pining for more of some of the best characters in storytelling and, luckily, right into the real Deadwood where all of the characters actually lived and gambled and murdered, sometimes among the chairs, buildings, and clothing that they did it in.

The best way to see it all is with the new “Deadwood: Heroes & Villains” customizable package that includes The Lawman’s Patrol Walking Tour, led by a historical reenactor and featuring Historic Deadwood’s most famous brothels, bars, shootouts, haunted houses, and unique architecture. You can also check out the haunted hotels, gold mines, slot machines, moonshine, and a hundred other things that make Deadwood one of the best places to check out the kitschy Americana surrounding the earliest reality stars and the wild, wild west.

Deadwood is Americana at its most Wild West and it’s as bonkers as it is entertaining. And if you’re looking to add more stops to this corner of the Wild West, just around the corner is Rapid City, one of South Dakota’s most charming towns (just a short drive from Mount Rushmore), the buffalo and striking geography of The Badlands, and all the beauty of South Dakota’s black hills. If you’re looking for a trip to America’s heartland that’s extra and entertaining, there’s really no better choice.