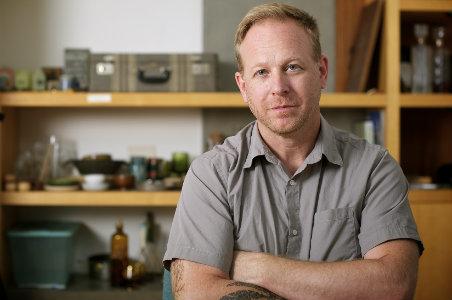 Spicy and authentic—apt adjectives for both chef Andy Ricker and his Pok Pok restaurants in Portland and New York. Winner of the James Beard 2011 Best Chef Northwest Award, Ricker is credited with bringing Thailand's rustic, everyman fare and its herbal, intoxicating flavors stateside via his restaurants, which include Pok Pok, Pok Pok Noi, Sen Yai Noodles, and Whiskey Soda Lounge, and his 2013 The New York Times bestselling cookbook, Pok Pok: Food and Stories from the Streets, Homes, and Roadside Restaurants of Thailand.

The subject of a new feature-length documentary, Farang, Ricker recently appeared in June's Thailand episode of Anthony Bourdain's Parts Unknown, while this year his tiny Manhattan Pok Pok Phat Thai will relocate to much larger digs just steps from its Brooklyn siblings.

We sat down with the refreshingly frank chef to chat about street food, his approach to Thai cooking, and the best restuarants in Portland.

What was the first street food you ever tried and loved?

A pretzel with mustard on it when I was a kid in Philadelphia. I was out with my stepdad and there were two pretzel venders across from each other. One charged twenty-five cents and the other was fifty. My stepdad was like, “Hey, why are you charging fifty cents and he's twenty-five?” The vendor said, “For the extra twenty-five cents, I don't spit in my mustard.” We paid the extra. [Laughs.]

What is the most repulsive thing you've sampled while traveling?

That's easy! On a domestic, coast-to-coast Delta flight they served me something they said was gnocchi. There was this watery tomato sauce with hard melted cheese on it, and the gnocchi was the consistency of Elmer's Glue mixed with tapioca. It was the most bizarre thing I've ever had in my life and that's saying something, because I've eaten some pretty weird stuff in weird places.

Is there another type of regional cuisine you have also fallen for and would consider trying your hand at?

I came very close to doing Yucatecan food instead of Thai. I love that stuff. I think it's amazing. All the guys who work in our prep kitchen are from the Mérida area in the Yucatán; they're all Mayan, so I still get to eat the food because they make it for lunch.

What is an underrated city that you feel more people should visit for its food?

I really like Vancouver. The food scene there is fantastic, lots of Japanese and Korean. That's not even including the Richmond, B.C. area, which I have yet to explore.

Is there a North American chef doing what you do with other Asian cuisines? Say, the Andy Ricker of Taiwanese night market fare?

I don't know. I have a hard time saying “the Andy Ricker of Thai food…” I'm not comfortable with that idea. Perhaps Pok Pok is unusually obsessive with being as true to the original thing as we possibly can, and I think that's counter to being a chef these days, who typically want to put their own stamp on stuff. To that extent, I don't call myself a chef because I don't want people to think the food we're doing is my food.

Which Portland chefs are doing amazing things these days?

Probably the hottest place in town is Ava Gene's. Chef Joshua McFadden is really knocking it out of the park. Gabriel Rucker continues to kill it at Le Pigeon. I'm a fan of a guy who is a little bit under the radar, but in other ways out there, Gregory Gourdet, and he's a chef at Departure Restaurant & Lounge on top of the Nines hotel. There's kind of a rude vibe there, especially on weekends, where people from Beaverton come to have a big night on the town, which is like people coming from New Jersey to go to the East Village. It's not my scene, but Gregory is a really, really talented chef and doing really good food up there!

Name a few restaurants that you would make a long-distance trip for.

I would fly to St. John Bread and Wine at London's Spitafields Market just to have breakfast. I'd order the Old Spot Bacon Sandwich, kippered herrings, Eccles cake—delicious. I would fly to Bangkok to eat dinner at Nahm, David Thompson's place. I think if Danny Bowen would reopen Mission Chinese Food, I would fly to New York. I'd fly to Charleston for Husk, or to its Nashville location, which I'm sure is just as good.

What are a couple of the most mind-blowing hotels you've stayed in?

The Dhara Dhezi in Chiang Mai is pretty incredible. They basically replicated a temple from Burma to be their spa, and you stay in these crazy bungalows. There is also a place in Austin, Saint Cecilia. It's a really nice hotel, especially for where it is.

How do you usually while away the hours on long-haul flights?

I try to sleep. It's an incredibly unfriendly environment for human beings—noisy, the air's all messed up, the food is terrible. It's uncomfortable. I try to sleep, but rarely do, so I watch movies, read. I have my computer with me for work. That's about it.

What do you always have in your travel bag?

Noise-canceling headphones, my iPad, my MacBook, and my phone. A notebook and a pen. Some Mentos. And some Tums.

You got a page or two? Bhutan someday. I'd love to go to India. I'm getting more and more intrigued by Turkey. A lot of friends have been there and say it's amazing. Portugal. I'd love to go to South America, like Chile or Argentina or something like that.

You recently spent time in Vietnam and posted a lot of photos of pho. Was this a pho-xpedition?

If anything it was a bánh mì (Vietnamese sandwich) expedition. The thing is, the sandwiches we get here, especially in New York, are four times the size of the ones you get in Vietnam. To me, it's all about the balance between the weight and texture of the bread mixed with the protein and pate and pickled vegetables. It's all in ratio. Here, we're obsessed with meat. It's disgusting. They don't jam it full of meat there, and the bread tends to be smaller. But I feel, maybe because there are so many Vietnamese people in America, the food of Vietnam has been more successfully imported in its original form than a lot of other ethnic foods. You can find a pho in America that's as good as some of the better versions there.