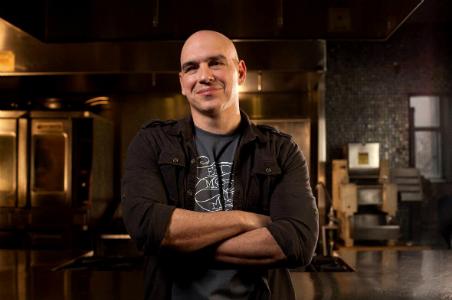 Michael Symon may just be the ultimate Renaissance man. The James Beard Foundation Award–winning chef, best-selling cookbook author, and successful restaurateur is also an Iron Chef on the Food Network and co-host on ABC's critically-acclaimed The Chew. In his spare time, the husband and father raises funds for Farm Aid and Autism Speaks, among other charities, and enjoys playing golf and riding his motorcycle through his beloved hometown of Cleveland, a city whose culinary scene he is widely credited with resurrecting. We recently spoke with Symon about why Cleveland is getting so much buzz this year and the forthcoming opening of his 13th restaurant, Mabel's.

You were born and raised in Cleveland and have become an ambassador for the city. why do you think it's getting so much attention this year?

It’s a combination of things. I moved back to Cleveland in 1990, and there was no culinary scene here—it has grown tremendously since then. I also think people like cheering for the underdog. We’ve been on a lot of lists where people didn’t shed a great light on our city and we’re clawing our way back up. People enjoy that story about our city. Certainly, the return of LeBron and all of the hotels that are popping up downtown and the Republican National Convention coming is part of it. And the Gay Games were huge.

In addition to being a successful restaurateur and cookbook author, you are an award-winning chef and TV personality. What has been the reception to your fame from other chefs?

I think I always had the chops to back up the [James Beard] Award, so when I traveled it wasn’t a matter of people not respecting me. I learned to cook in New York in the '80s, so the chefs I worked for coming up were superstars. But the more people like you, the more they hate you. It used to bother me, now it doesn’t. In 1998, I was lucky enough to be named a Best New Chef by Food & Wine—that was a huge break for me. But no one could believe that someone from Ohio hit number one. All the other chefs were from New York, LA, and Chicago. People kept coming up to me and saying, “You’re from Cleveland?  How did they find you?”

I love Cleveland because I was born and raised here and I know there is so much more to this city than the suburbs that surround it. And I was never more aware of that than when I won this award. Every time my friends come here now—Mario Batali, Bobby Flay, Jonathan Waxman—they say to me, “God, Cleveland is so much cooler than I thought!” So, I think [the recent buzz] is bringing more people to the city that may not have come otherwise.

What are you favorite places to eat—and shop for food—in Cleveland?

If I’m going to get fancy I’ll go to Greenhouse Tavern, Fire, or Flour. Some of the places I really love aren't fine dining, though. I love Big Al’s on Larchmere, Coventry Inn, Superior Pho, and Sokolowksi’s. The other place I love is Sterle's Country House, the Slovenian place on East 55th. I go to the West Side Market for kielbasa, bacon, and ham. I get my spices at Urban Herbs. I get my smoked stuff at J & J and Dohars. And then there's the Shaker Square Farmer's Market—I go there a lot, too.

You come from a very close-knit family. How does that inform your relationship to food?

Food has the ability to bring you back to a place. There aren't a lot of things that do that. My mom is Greek and Sicilian so when I smell lamb roasting I’m instantly brought back to childhood—I’m a kid in my mom’s kitchen smelling rosemary and lemon. I think most people have those food memories: an aroma or a smell or a taste that brings you to a different place, whether it’s a trip you took as a child or a great dinner you had with your husband or wife. Food is a great way to remember a story, tell a story, or start a new story.

what made you decide to open a barbeque place?

Everyone knows I’m a very meat-centric chef. I think there are some good barbecue places in Cleveland but I don’t feel we have one we can call our own. If you go to a barbeque place they may be doing Kansas City style or Texas style. So, we're creating a style of barbeque that's unique to Cleveland. It will be smoked low and slow over Applewood because we have apple orchards in Cleveland, the base will be brown mustard sauces (like Ball Park Mustard) and instead of doing hotlinks like in Texas, our meat will be kielbasa. We'll have homemade krauts and delicious pickles. When people walk into Mabel's, I want them to feel and smell the city of Cleveland just like they do when they walk into the West Side Market.

How does Cleveland's food scene compare to New York's?

Part of being from Cleveland is that we don’t realize how on point we are sometimes. When I bring someone from out of town to the West Side Market, I hear them gasp. If places like Sterle's or Sokolowksi’s were in New York you wouldn't be able to get in the door. That was the funniest thing about this place in Brooklyn I recently went to with my wife. Here we were with a bunch of hipsters working the place and people are eating kielbasa and listening to polka and there's a line out the door and down the street to get in. In Cleveland, the women cooking the pierogis are from the local church and they're wearing babushkas and the restaurant has been there for 100 years!