The joy of not being sold the same-old same-old.

he United States has many breathtaking, unique, strange, or even one-of-a-kind things to see. It also has a lot of ubiquity, especially when it comes to modern commerce. It can be almost impossible to find a destination that doesn’t provide access to the ubiquitous commercial and culinary expectations of Anytown, USA. Even glamorous and remote locations are prone to this corporate sameness. There are nearly a dozen Subway sandwich shops on Hawai’i Island (Big Island) alone. In New York City, you’ll find over 300 Starbucks coffee shops. There’s even a Verizon store outside Glacier National Park in Montana. It can be hard to escape the many franchises of American industry (particularly banks, restaurants, pharmacies, retail stores, and car shops), especially as it sprawls across a vast distance.

There is a uniformity that plagues so much of America, which is a country that should thrive on diversity. And while these creature comforts provide many travelers with a sanctuary of familiarity–not to be confused with being homey–while they are away, the encroachment of chain stores and restaurants tends to homogenize destinations and divert funds from independently-owned businesses that feed the culture and community of a location. And so everywhere you go in America, you know you can find the same auto parts stores and Applebee’s–and that kind of sucks.

Because one of the most exciting aspects of travel is feeling like a fish out of water. A traveler is not only motivated to try new things but compelled–and that’s a good thing. Spending time outside one’s comfort zone is a prime opportunity for intellectual and emotional growth.

That’s why I was so surprised to find the singular uniqueness of Highlands, North Carolina, a swanky little mountain town in the southern Appalachians’ Blue Ridge Range and Nantahala National Forest, and one of the highest in elevation east of the Mississippi. With a year-round permanent population of around 1,000 and a high-season population influx of around 20,000, Highlands knows a thing or two about hospitality, sure, but so do many places. What makes Highlands unique is its commitment to being absolutely uncommon.

It’s almost dismaying to travel thousands of miles across the US and find out your destination has no quintessential Main Street–the singular essence of downtown Americana, built to epitomize a community’s history, commerce, and culture. Finding such districts is almost always a delightful way to submerge yourself in a destination and get a feel for the lifestyle.

The town center of Highlands is just three blocks long, but they pack a punch. Stuffed with charming boutiques and upscale shopping, pubs, restaurants and wine tastings, inns, parks, churches, a nature center, and even a few cultural outposts, including visual and performance arts centers, there’s plenty to check out in such a small area. There’s also a sense of humble reverence for all things Highlands-centric.

“Our 82nd Season” boasts the sign outside of Wit’s End Shop, a women’s fashion apparel boutique that’s been family run since 1940. Not only are Highlands businesses independently owned and operated, but they’re also legacy: Christmas Tree on the Hill was founded in 1975; Annawear, which offers eclectic bo-ho mountain style, opened in 1986; Highland Hiker has been outfitting hikers, fishermen, and travelers since the ’90s and Jannie Bean Designs fine designer and custom jewelry since the ’80s, and Highlands Gem Shop has been a Highlands landmark since 1952. There’s a wide variety of offerings for such a short retail strip as well: antiques and art; men, women, children, and hiker apparel; wine and specialty/gourmet items; crafts, stationery, and glass stores; and every type of bauble you might dream up. A special feeling comes from treasure hunting in a one-of-a-kind store. 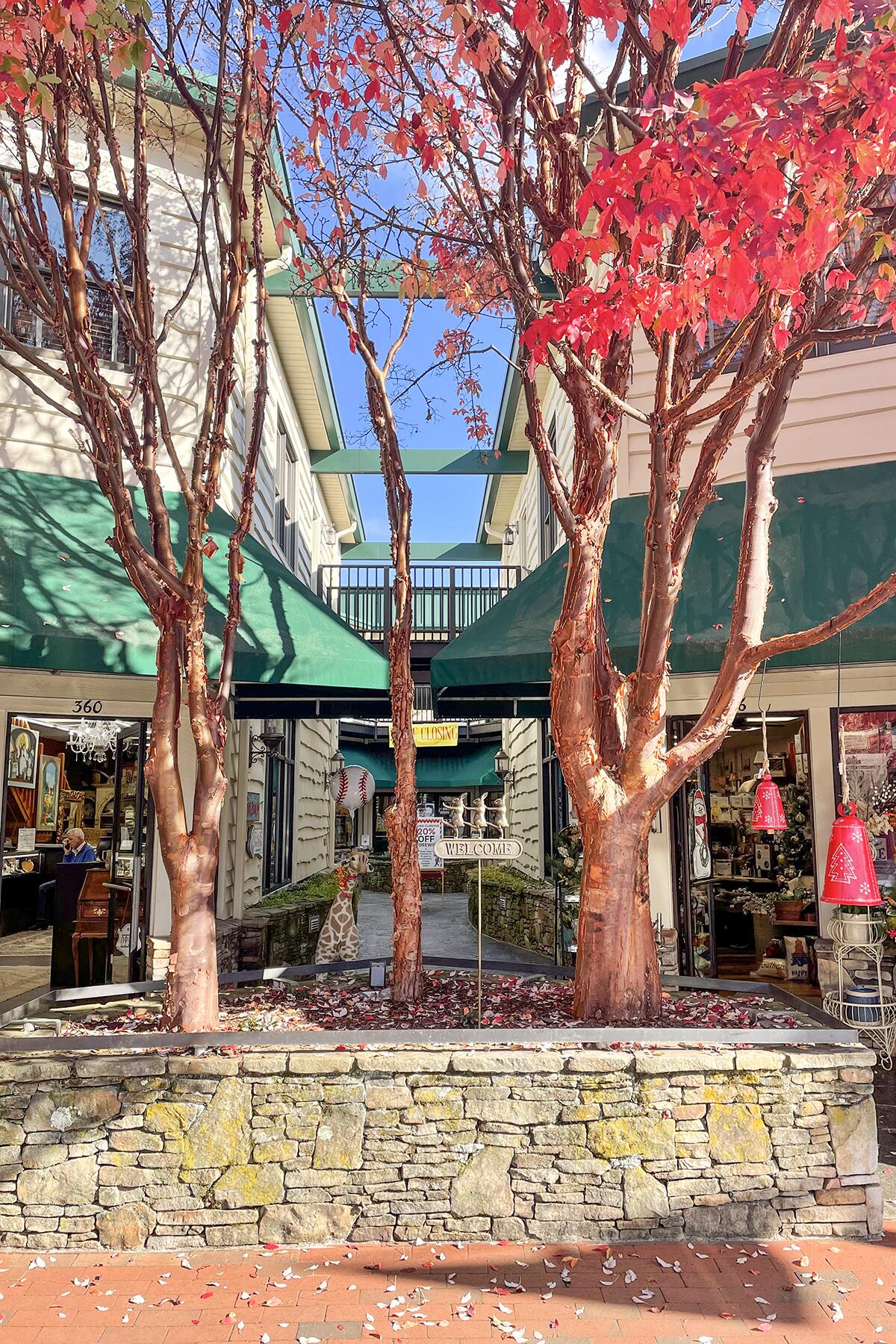 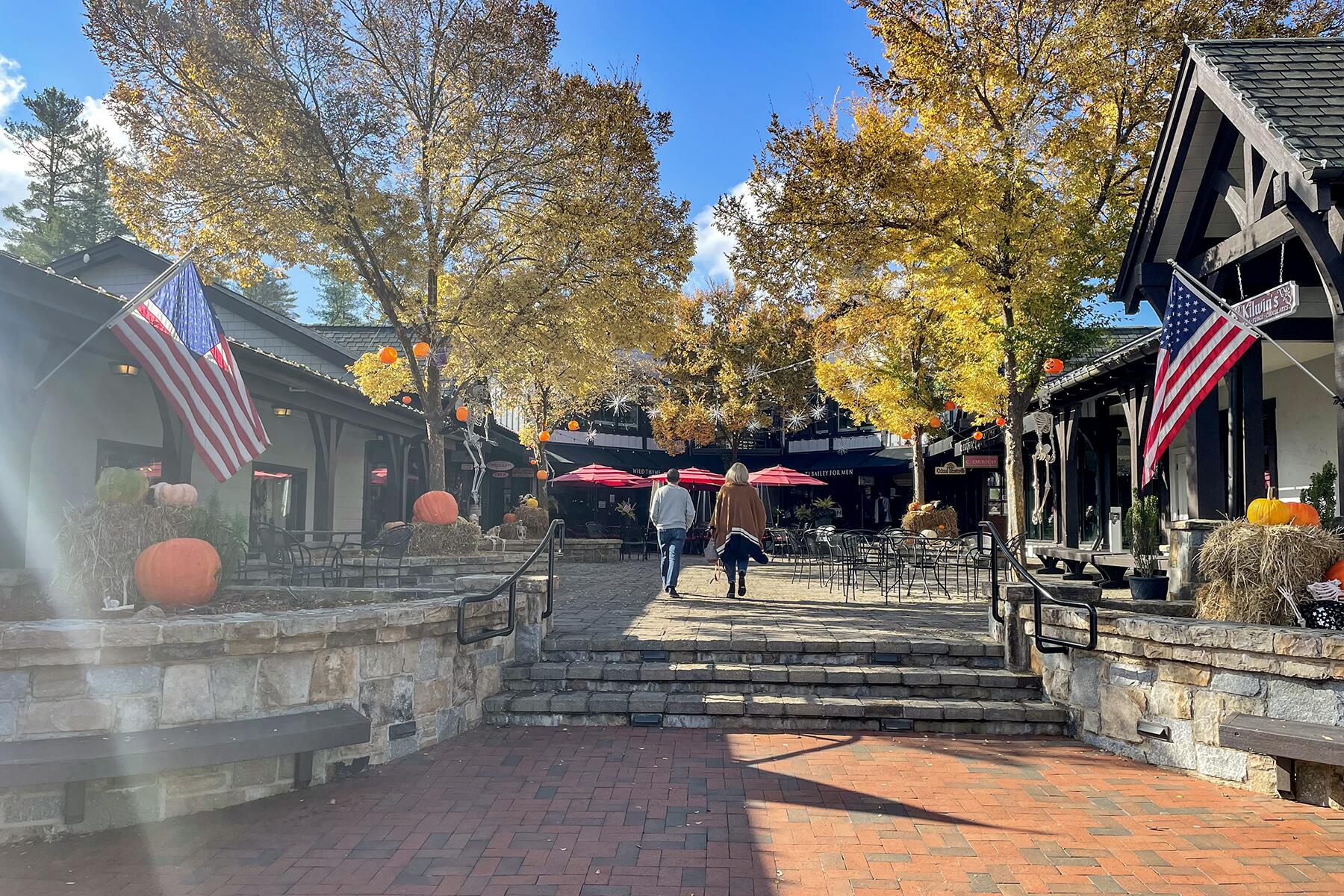 So much of what makes a destination distinctive is experienced through eating and drinking. Highlands’ culinary offerings are a faithful interpretation of the town’s culture: practical but not dull, stately but not stuffy. Seasonality, sustainability, and trendy foodie practices have always been mainstays in these mountains–local gardens, greenhouses, and farms produce the bulk of ingredients that fill up a menu. And a good day in town always starts with a classic breakfast with a local twist.

At The Blue Bike Cafe, if the servers don’t know your name, they will by the end of your meal, all while slinging eggs, topping off coffee, and making babies smile. Any restaurant that’s as full of locals as tourists is definitely a good place to try. And even if you do start your day at the BBC, everyone will point you to Caulder’s Coffee Cafe for your second cup. The way the townsfolk talk up this coffee shop is enough to make you question what’s in the beans (it turns out it’s just the “full city” flavor of its signature house blend).

For lunch (or dinner or drinks), cozy up in The Ugly Dog Pub, where fancy regulars sit at the bar and local buddies chew the fat with tourists on the patio. The Oak Steakhouse, a satellite of a well-established steakhouse in Charleston, South Carolina, is surprisingly more than a typical meat-and-potatoes brasserie. This contemporary steakhouse has regulars milling at the bar and by the fireplaces, out-of-towners getting the inside scoop from servers and bartenders, and a menu so rich and varied it could easily feed a locavore vegetarian.

Whatever time of day that hunger or thirst strikes you, there might be nothing quite as charming as Mountain Fresh Grocery and Wine Market. More than just a grocer, Mountain Fresh Grocery operates as a top-notch food and goods provider but provides the sanctuary of a community stomping ground. Spending time in the open-space café feels akin to meeting at around the town watercooler. Grab made-to-order breakfast, pizzas, sandwiches, a beer at the bar, or a coffee drink; browse the selection of wines, artisanal oils and vinegar, and freshly baked sweet treats.

The Feeling of Actually Being Somewhere Different

The landscape of Highlands is remarkable. Western North Carolina is home to the Blue Ridge and Smoky Mountains of the southern Appalachians, these mountains are blessed with an abundance of gorgeous waterfalls. Within 10 miles of the town, there are nine falls worth viewing. The best of those can be found at Bridal Veil Falls, where you’ll have the opportunity to spot a Seal Salamander; and Dry Falls, where you can walk behind the falls and witness the power of the rushing water from within the belly of the beast. 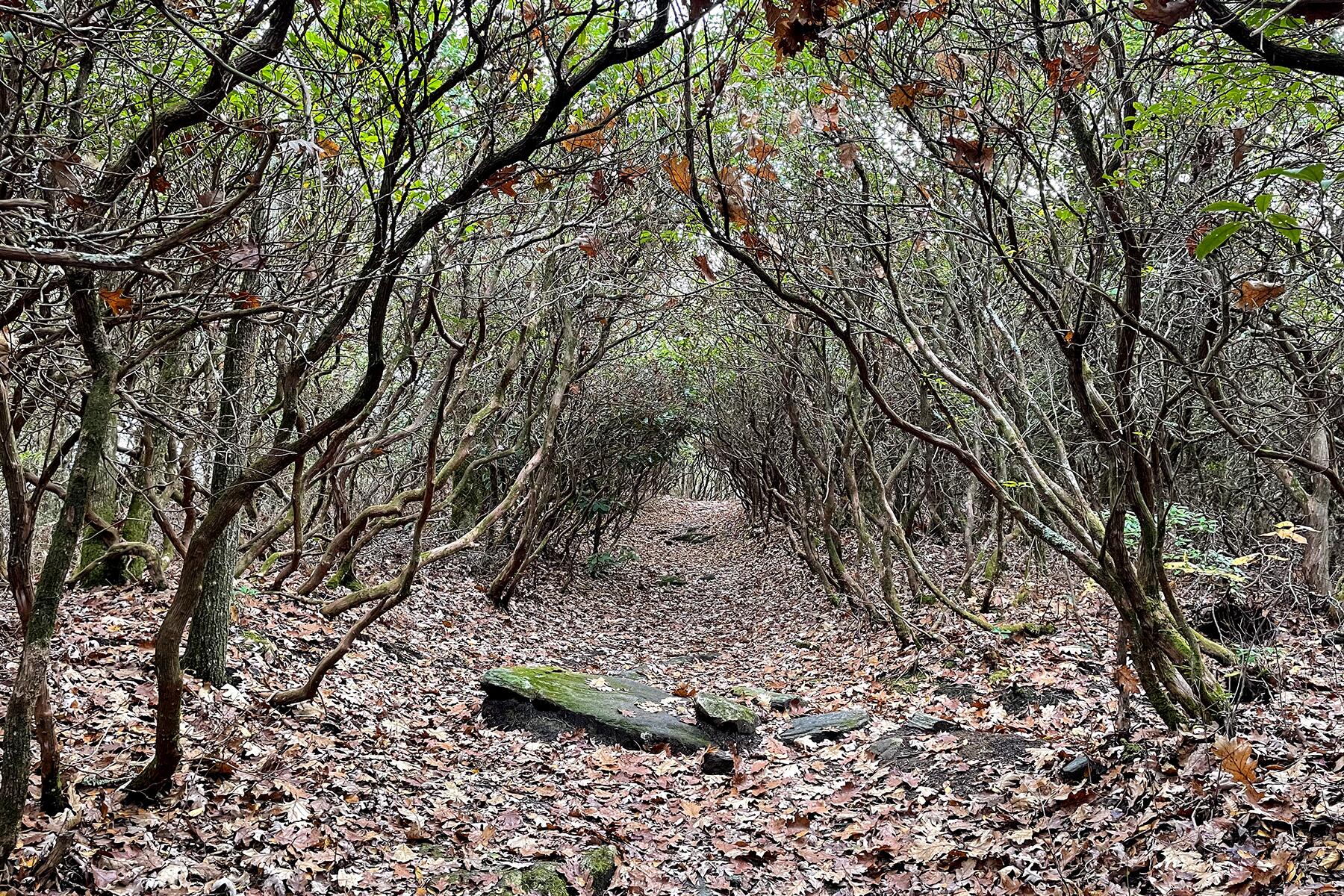 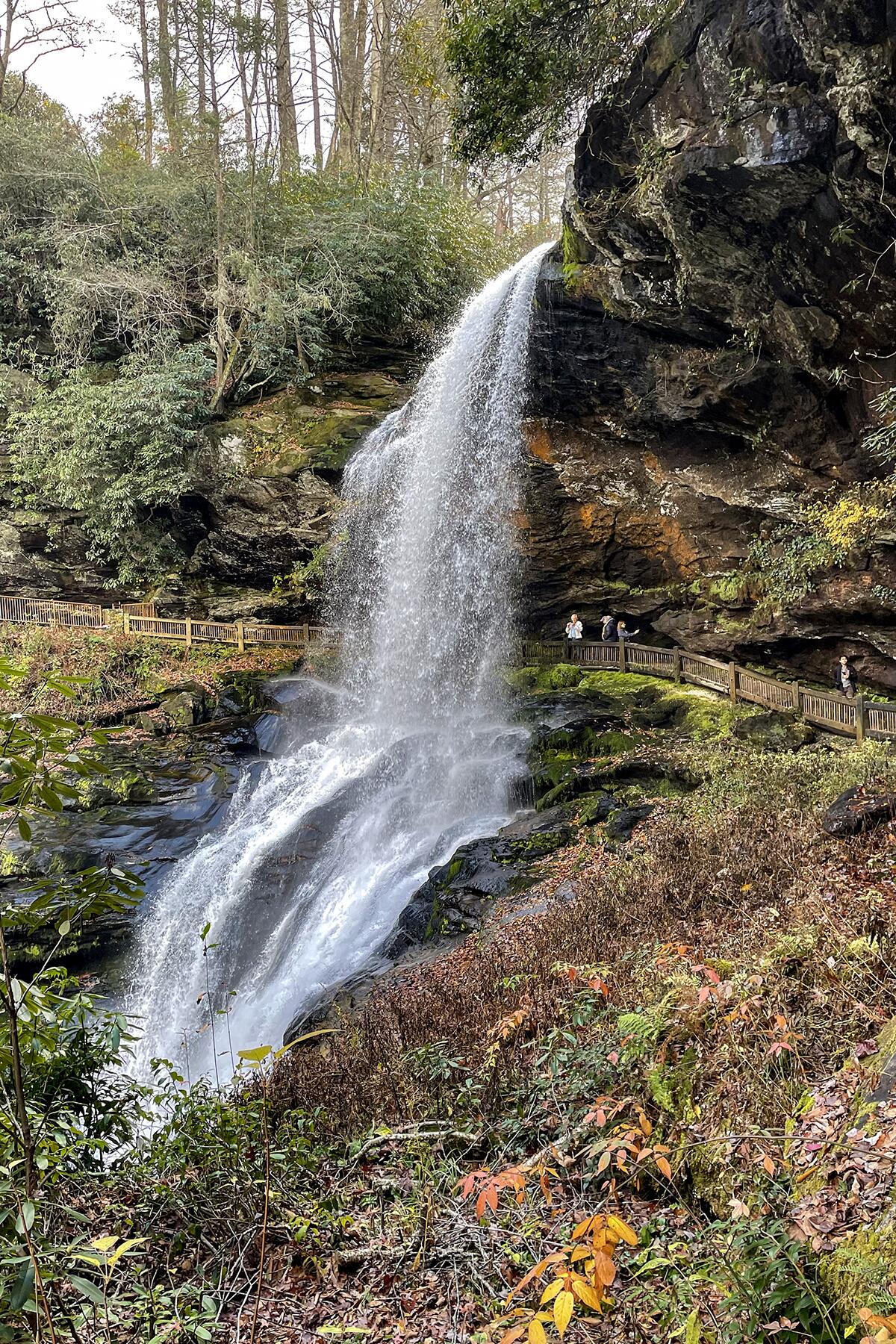 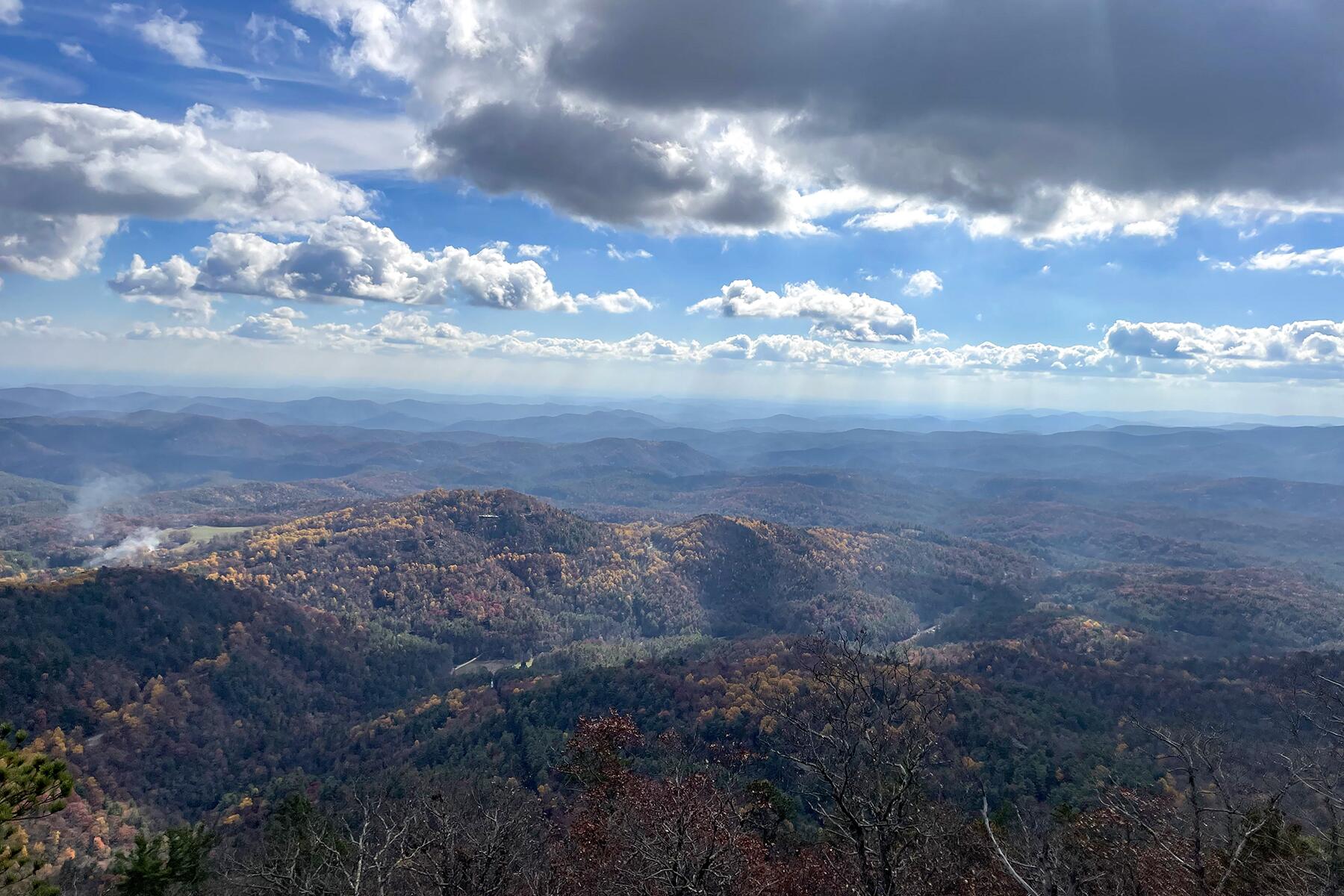 Situated in temperate rainforest, Highlands is home to 400 rare and more than 250 endemic plants, including trees, shrubs, mosses, ferns, and wildflowers. The best way to experience the environment is through one of Highlands’ myriad hiking trails, but if you want to dive deeper, check out the Botanical Gardens at Highlands Biological Station, where you can wander gardens that include a bog and a wildflower meadow, along with an impressive collection of native azaleas, plants of the Cherokee, mosses, and liverworts, and rock outcrop species.

The chance encounter is an extra exciting prospect of traveling, and Highlands offers an amazing, ephemeral experience called the Shadow of the Bear. On sunny days in late fall (late October/early November) and early spring (late February/early March), you can chase a particularly special sunset that illuminates a bear-like shadow across the mountains. Don’t be late–the bear emerges for only 30 minutes daily and can be seen from the Rhodes Big View Overlook on Highway 64.

INSIDER TIPThere are also many opportunities to spot wild black bears throughout the land, but don’t go looking for interaction–in fact, make your presence known as you tramp through the scenery.

Get Out of the Way

Accommodations in Highlands are anything but ordinary as well. While travelers might miss the comfort of consistency from chain hotels, they’ll be charmed by the idiosyncrasies of individually unique lodging that includes guest houses, inns, lodges, boutique hotels, and resort hotels. In a few cases, travelers can even marvel at the history–The Highlands Inn and The Old Edwards Inn, the two oldest businesses in town–were opened in the 19th century and are still open for business in their original Main Street locations. The Park on Main even designed their hotel for families with dogs. If you’re looking for something a little more modern, the trendy yet tranquil Skyline Lodge is one such option. 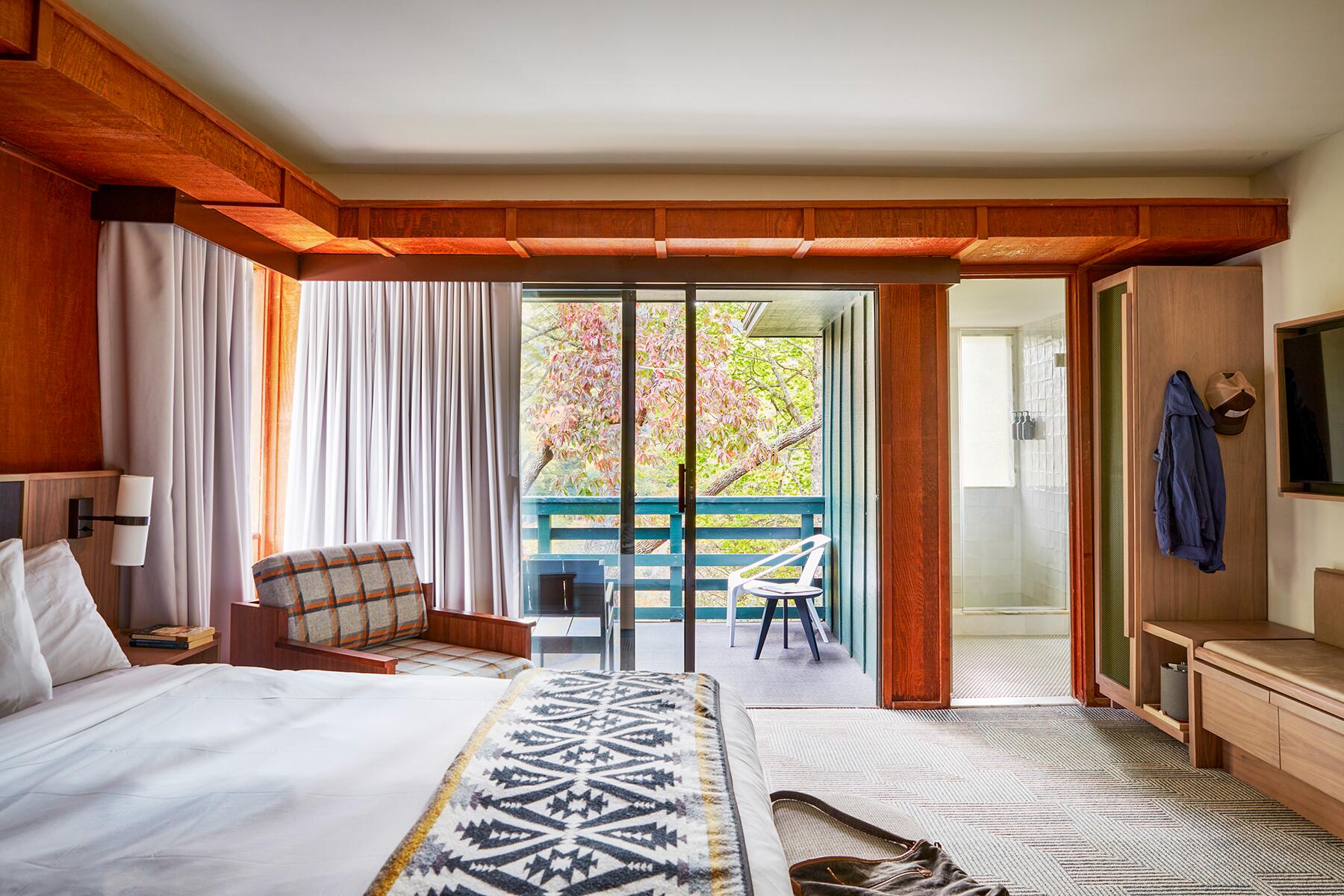 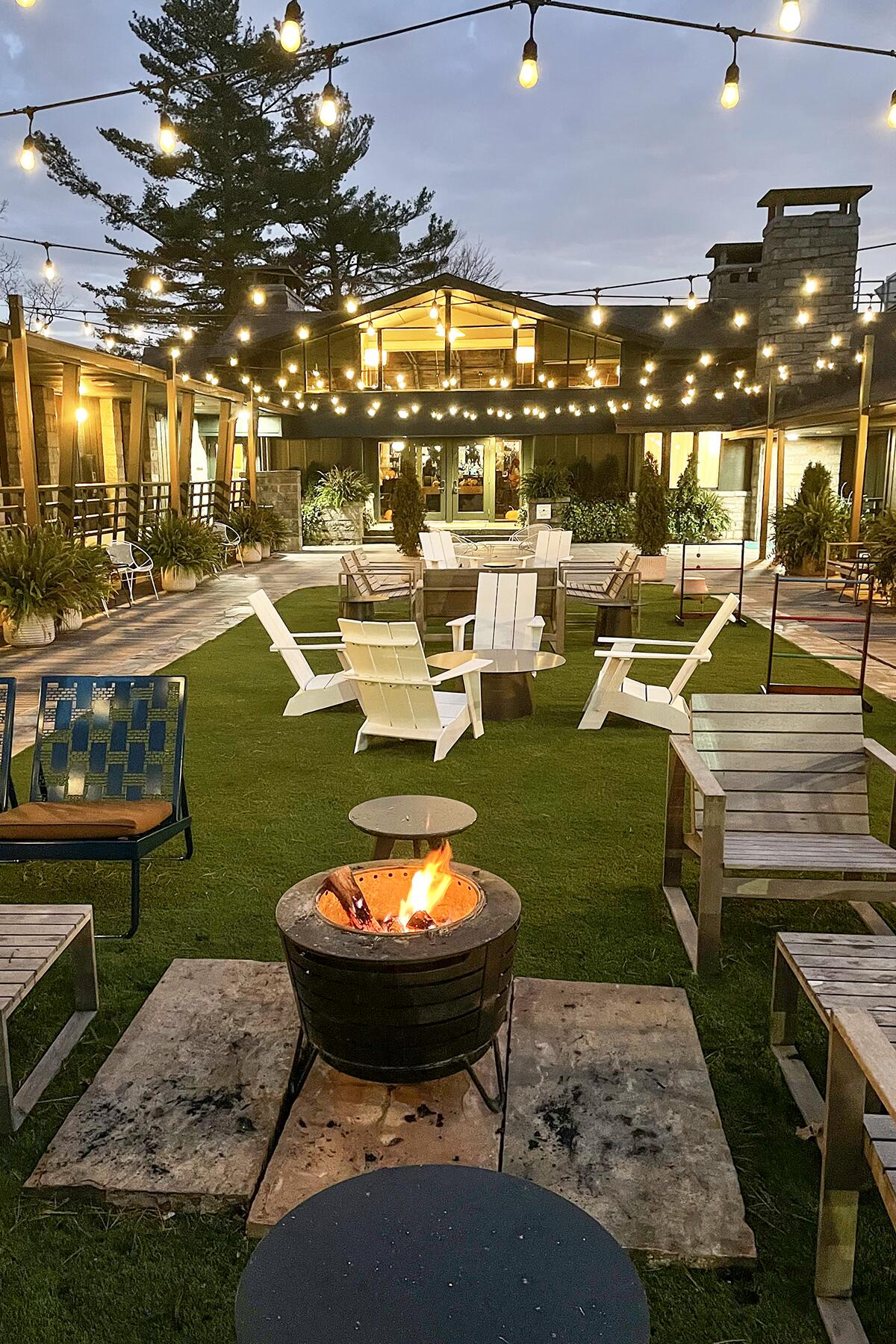 That’s not to say Skyline Lodge doesn’t have history. Originally built in the 1930s by Frank Lloyd Wright student Arthur Kelsey, the Lodge exudes natural design. Nestled in the mountain greenery of the lush, temperate rainforest and bursting with views from every angle, the original Lodge was accented with native stone, chestnut wood, and hand-cut cedar shakes. Two renovations and almost 100 years later, the Lodge has settled into its retro-rustic-chic sensibility by playing up the kitschy-cool factor of the recent motel renaissance (brought about in no little part by Schitt’s Creek) combined with a laid-back, folksy-warm mountaineering/camper vibe. It is the literal embodiment of Highlands’ charm.

One of the most incredible aspects of travel is the chance to feel somewhere new and different, away from our everyday, usual aspects of life. And as the US blends into a bland corporate wash of sameness, seeking out the weird, the unique, the independently-owned, and the time-honored can feel like more than a chance for something different, but an opportunity for refuge. The relief of being somewhere different is thrilling, surprising, and worthwhile. And in a town like Highlands, even the mountains of North Carolina can feel as distant, foreign, and exciting as any international destination.