North Carolina is serious about its barbecue. In fact, some of the best barbecues in the state can be found about an hour north of Charlotte in Lexington, known as the Barbecue Capital of the World. Out shadowed by its neighbors to the north, Charlotte has long been ridiculed for its lack of barbecue greatness. Yet, that has changed in recent years. Thanks to dedicated local chefs and beloved restauranteurs, the Queen City has really upped its barbecue game. You can find solid representations of classic Lexington-style and Eastern Carolina pulled pork barbecue along with Texas brisket and other regional styles here. Here are a few of Charlotte’s top BBQ spots that represent the best old-school and new-school renditions. 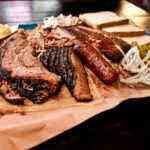 Owned by local restaurateur Frank Scibelli, the original location of Midwood Smokehouse opened in the funky Plaza Midwood neighborhood in 2011. It has since expanded to four other locations throughout the metro-Charlotte area. It’s a local favorite for its carefully smoked meats (the all-wood smoker burns 24 hours a day) and tasty sides. You can’t go wrong with the Carolina Pork—hickory-smoked chopped barbecue with Eastern North Carolina vinegar sauce. There’s also St. Louis style pork ribs and Texas-style brisket with tangy Midwood sauce. Save room for their decadently sweet pecan cobbler!

Bites Alex Temblador Could This Be Las Vegas’ Weirdest, Most Outrageous Restaurant?
Continue Reading Article After Our Video 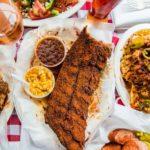 RELATED STORY
10 Essential Stops on a BBQ Crawl Through Memphis

Charlotte restaurateur and chef Jim Noble long dreamed of opening this barbecue joint and spent 25 years conducting research all over the South. He crisscrossed the Carolinas, traveled to Texas twice, and sampled ribs and pork sandwiches everywhere in between. Noble Smoke is the result of his efforts and a love letter to pitmasters everywhere. Housed in a spacious former warehouse, Noble Smoke offers premium heirloom meats cooked both Carolina and Texas-style. There are two traditional North Carolina masonry barbecue pits on-site to complement steel Texas-style smokers. Family-style sides made for sharing like Eastern and Western-style slaw, pan-fried corn, Carolina field peas okra are based on the best seasonal, local ingredients.

Variety truly is the spice of life at Uptown’s Queen City Q. It’s been a part of Charlotte’s barbecue scene since 2012. Here you’ll find decadent smoked pork, brisket, ribs, chicken, and sausage representing a melding of styles. On each table, there’s housemade Eastern North Carolina vinegar-based sauce, Western North Carolina sweet sauce, and tangy South Carolina mustard-based sauce so you can doctor up your meat to your liking. Go for the “Q Platter” if you want a taste of it all.

Not much has changed at this spot since 1963 when Bill Spoon first fired up the smoker. His grandson Stephen runs the business today. At this long-time barbecue spot, you’ll find traditional Eastern Carolina style barbecue. That means whole hog hickory smoked pork doused lightly with a peppery vinegar sauce. The standard accompaniments include a mustardy coleslaw, golden hushpuppies, baked beans and homemade Brunswick stew. You won’t find brisket on the menu, but there are chicken, ribs, and even fried flounder just to shake things up. Of course, you’ll want to end your meal with banana pudding—an Eastern Carolina dessert staple.

This venerable West Charlotte barbecue spot definitely falls in the old-school category. It’s been a fixture since 1959 and still serves up barbecue straight to your car. Bar-B-Q King one of the few remaining drive-ins in Charlotte and definitely a unique dining experience. The pork plate, served with slaw and fluffy hushpuppies, is considered one of Charlotte’s best bargains. Not much on the menu is over $10 which makes it feel even more like stepping back in time. You can also get barbecued chicken, fried fish, onion rings, milkshakes, and more.

At this Belmont barbecue spot housed in an old service station, the motto is “Cooked With Wood.” Sweet Lew’s prides itself on its authentic smokehouse that has no electric or gas assist. It’s simply hickory, pecan and peach woods, and pure, old-fashioned fire that gives their barbecued meats their signature smoky flavor. Although Sweet Lew’s is relatively new to the scene, the restaurant operates in the longstanding Lexington style tradition. This means their salt and pepper seasoned pork shoulder is carefully tended over a 250-degree smoker for 12 hours and finished with vinegar sauce. They also offer Alabama chicken with white sauce, brisket and ribs. Sides include collard greens, mac and cheese, boiled peanuts, and Lexington style red slaw.

INSIDER TIPMany of Charlotte’s best BBQ restaurants bottle their sauces so you can take a little bit of Carolina home with you. At Sweet Lew’s you can pick up their pork sauce, rib sauce, and brisket sauce.

This homegrown chain is part-biker bar, part-barbecue joint and all about beer—and the combination works. The original location on South Boulevard, founded in 2003, was once a motorcycle repair shop that inspired the biker theme. While it may be easy to dismiss Mac’s Speed Shop as simply a bar, they are serious about their barbecue. The pitmasters here regularly enter competitions and win. At all eight locations, you can depend on authentic Carolina-style pulled pork, dry-rubbed beef brisket, and a menu full of Southern-inspired sides and pub grub. Of course, beer figures prominently with Mac’s boasting more than 60 beers on tap.

Bubba’s has been serving up Eastern North Carolina style barbecue for over 20 years. In keeping with the Eastern North Carolina style tradition, Bubba’s uses a 33-hour process where the whole hog is carefully roasted on a wood-fueled pit. The meat is lightly seasoned with salt, crushed red pepper, and vinegar so that you can add your own sauce—or not. Each pork plate is accompanied by bullet-shaped hush puppies, mustard-based coleslaw, and your choice of barbecue beans, green beans, fries or potato salad. They also offer slow-smoked ribs, Southern fried chicken tenders and Brunswick stew that Bubba’s claims are a North Carolina original.

This second-generation owned deli and barbecue spot is a Charlotte favorite. A fixture of the historic Dilworth neighborhood, Art’s serves up breakfast and lunch in an old-fashioned diner setting. The lunch menu always includes a daily special (like the fried chicken plate) plus Art’s signature chopped and sliced pork and beef sandwiches topped with slaw. You can also pick up barbecue by the pound, Brunswick stew by the quart, and Art’s bottled vinegar and tomato-based sauce.

INSIDER TIPBe sure to check the restaurant’s hours and days of operation before you go. Several, particularly the more “mom and pop” spots like Art’s, are closed on Sundays.