Books Deanne Revel Is the Most Magical Library in the World in the Middle of the Ocean?

Traveling with hard-to-please teens can be trying, even when aided by the bright lights and “wow”-factor sights of a big city like New York. While the Empire State Building, Statue of Liberty, and American Museum of Natural History are not-to-be-missed staples for first-time visitors, there are some teen-primed attractions that are worth exploring if you dig a little deeper. We've rounded up five teen-tested-and-approved attractions to keep everyone happy and occupied on your next family trip. 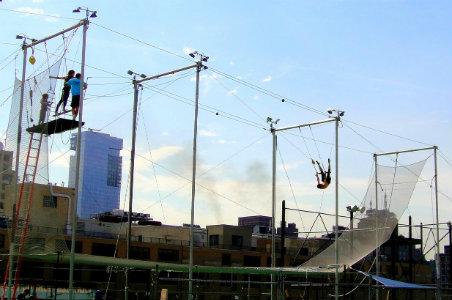 Take your kids' NYC experience to new heights—literally—at Trapeze School New York. In a two-hour class ($50), students (ages 6 and up) can learn the art of trapeze on a rig set to standard circus dimensions (including safety harnesses and nets, of course!). Participants, under expert supervision, learn to “fly” in small group sizes of 10 or less; your budding aerialist will be in the swing of things in no time, fearlessly jumping, hanging, and flipping from an platform perched more than 20 feet in the air, with striking views of the downtown Manhattan skyline in the background. 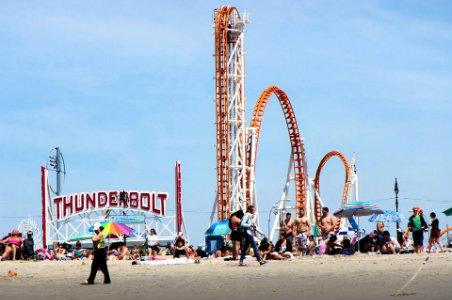 This quirky little slice of seaside Americana has been luring crowds to Brooklyn with diversions and amusements since the 1800s. Today, much of the action centers on Luna Park, home to the landmarked, 87-year-old Cyclone wooden roller coaster, and new for 2014, the Thunderbolt steel coaster, which reaches speeds of 55 mph and includes a 90-degree vertical drop and loop. The amusement park comes jam-packed with nearly 30 rides in all, accessible via à la carte ticketing or unlimited four-hour wristbands ($20–$32).

Books Deanne Revel Is the Most Magical Library in the World in the Middle of the Ocean?

Take a break between thrills with a stroll along the beachfront boardwalk, and to scarf down one of Nathan's Famous hot dogs at the outfit's original stand. Finish the day at the Coney Island Circus Sideshow, where teens will be wowed by a cast of fire-eaters, sword swallowers, contortionists, and more (shows run about 45 minutes). 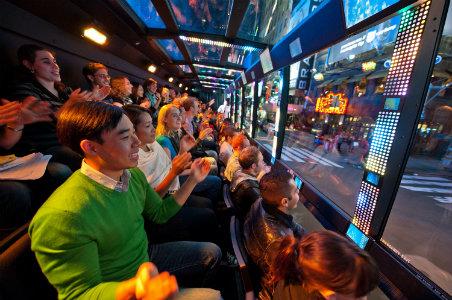 Part tour bus, part theatrical production, The Ride is a concept all its own. Pile in for this 75-minute interactive show ($64–$74 per ticket) on wheels that pairs an animated duo of bantering onboard hosts (stand-up and improv comedy pros) with a slate of scripted performances that unfold on the city streets. The Ride, a moving theater of sorts, showcases a cast of featured street performers, including a tap-dancer, freestyling rapper, ballerina, and more—along with the seemingly never-ending stream of New Yorkers who also unwittingly become part of the entertainment.

Take in key sights and hear funny commentary on Midtown mainstays like Central Park, Grand Central Station, Bryant Park, the Chrysler Building, and Times Square. The technologically tricked-out multimillion-dollar motor coach features stadium-style seating for up to 49 patrons, plenty of audio-visual flair (including 40 plasma screens), floor-to-ceiling glass windows, and even a high-tech hydraulics system for guests to experience a simulated ride along a stretch of NYC subway. 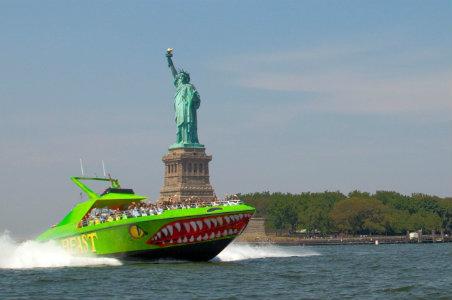 Feed your need for speed aboard The Beast. Teens can easily get bored on other slow-paced sightseeing cruises, but this speedboat version pairs skyline panoramas and up-close Statue of Liberty views with some serious fun, all delivered in a 30-minute, rip-roaring ride down the Hudson River and out into New York Harbor ($22–$28 per ticket).

The fastest jet-powered speedboat operating in the city, the 70-foot vessel—painted bright green with glaring yellow eyes and sharp teeth on the hull—accommodates up to 138 people and reaches speeds of 45 mph. Get pumped listening to the high-energy music onboard, and be prepared to get drenched—if the splash from New York Harbor doesn't get you, the playful yet unmerciful onboard guides, equipped with water guns, surely will. 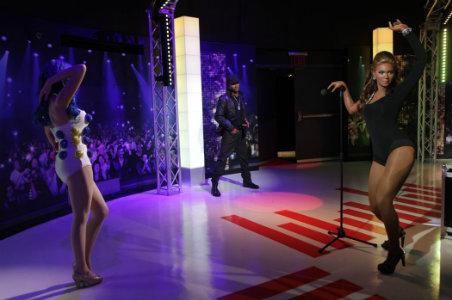 In a city where star sightings are fairly common—but making a big deal about spotting one is not—Madame Tussauds ($23.30–$36 per ticket) offers more than 200 lifelike wax figures on hand to indulge your celebrity meet-and-greet fantasies. The New York venue—an outpost of the 200-year-old original, founded by wax sculptress Madame Tussaud herself in London—encourages interaction between the figures and guests, with no ropes or barriers to stand between you and the ultimate photo op with your favorite celebs, which range from the historical (from Benjamin Franklin to Marilyn Monroe) to today's hottest A-listers (like Taylor Swift and Leonardo DiCaprio).

Sometimes eerily lifelike (they even have real human hair), the wax replicas populate a series of themed rooms, like the Opening Night Party, highlighting heavy-hitting Hollywood stars; and the Sports Zone, filled with legendary athletes. Round out your visit with the Marvel Super Heroes 4D Experience, a short 3D film featuring characters like the Hulk and Iron Man, along with 4D special effects in the form of water spray and wind gusts.

Elissa Garay is a contributor to major U.S. travel publications, including Fodor's, Condé Nast Traveler, Yahoo, and more. Based in Brooklyn, NY, she has traveled to and reported on some 55 countries and 20 cruise lines around the globe, and has resided in Argentina, France, England, Denmark, and the Netherlands. Follow her @TravelSpiritNYC.