Dust off that hat and slip into your best transatlantic accent, the TWA Hotel is taking you back to the 1960s.

Back in 2001, when the long-running airline TWA went out of business, their terminal at JFK was shuttered and sat unused for years, discreetly tucked within the modern sprawl that had built up around it. Fortunately, not everyone had forgotten about the building, and in 2005, the terminal was placed on the National Register of Historic Places, ensuring its preservation in one way or another. No longer equipped to function as a terminal, the space was eventually converted into JFK’s only on-airport hotel.

Opened in May of last year next to Jet Blue’s Terminal 5, the TWA Hotel is a time capsule, and one that delightfully captures the era from whence it came. The redesign successfully showcases the futuristic aesthetic, stylish comfort, and limitless promise of the Jet Age, a time when air travel had a decidedly different vibe than it does today.

Defined by the perception of never-ending progress and upward movement, the Jet Age was a time when idealism about the future reigned supreme and technology was set to transform the world into a bright, stylish, functional place. These days it feels like the future of the 1960s remains just that—in the future, somehow more distant now than it had been back then. The differences in where we thought we’d be and where we ended up are stark, but for those who are yearning for that lost airport utopia where comfort, style, and glamour reign supreme, the TWA Hotel delivers.

Designed by the Finnish-American architect and furniture designer Eero Saarinen, the terminal displays a streamlined, aerodynamic quality. Saarinen, who also designed the famous Gateway Arch in St. Louis, was well-known for utilizing a range of artistic influences to complement his futuristic style. In 1962, New York City’s TWA terminal opened to critical acclaim and public admiration, being described as “the Grand Central Station of the Jet Age.” The roof, constructed from a slab of curvaceous concrete, is its crown jewel, and the resulting shape is reminiscent of a bird’s wings taking flight. The elongated red-carpeted corridors that flank the main hall elicit a feeling of excitement that, before even setting foot on the plane, the journey has already begun.

The majority of the TWA Hotel is accessible to everyone, so along with serving as an all-night crash pad, it also functions as a welcome respite for harried travelers who desire a moment of serenity away from the usual chaos and hubbub of JFK. 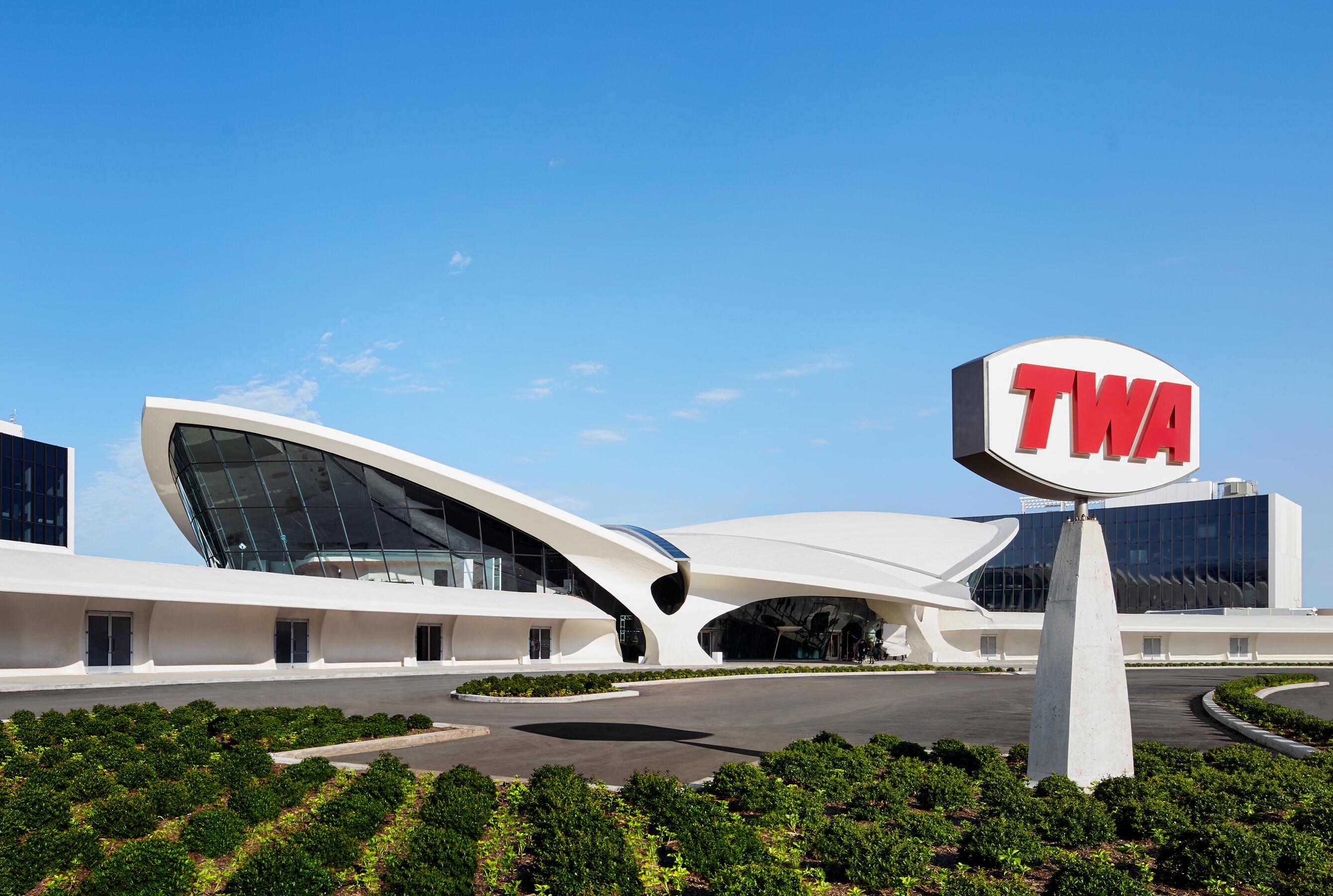 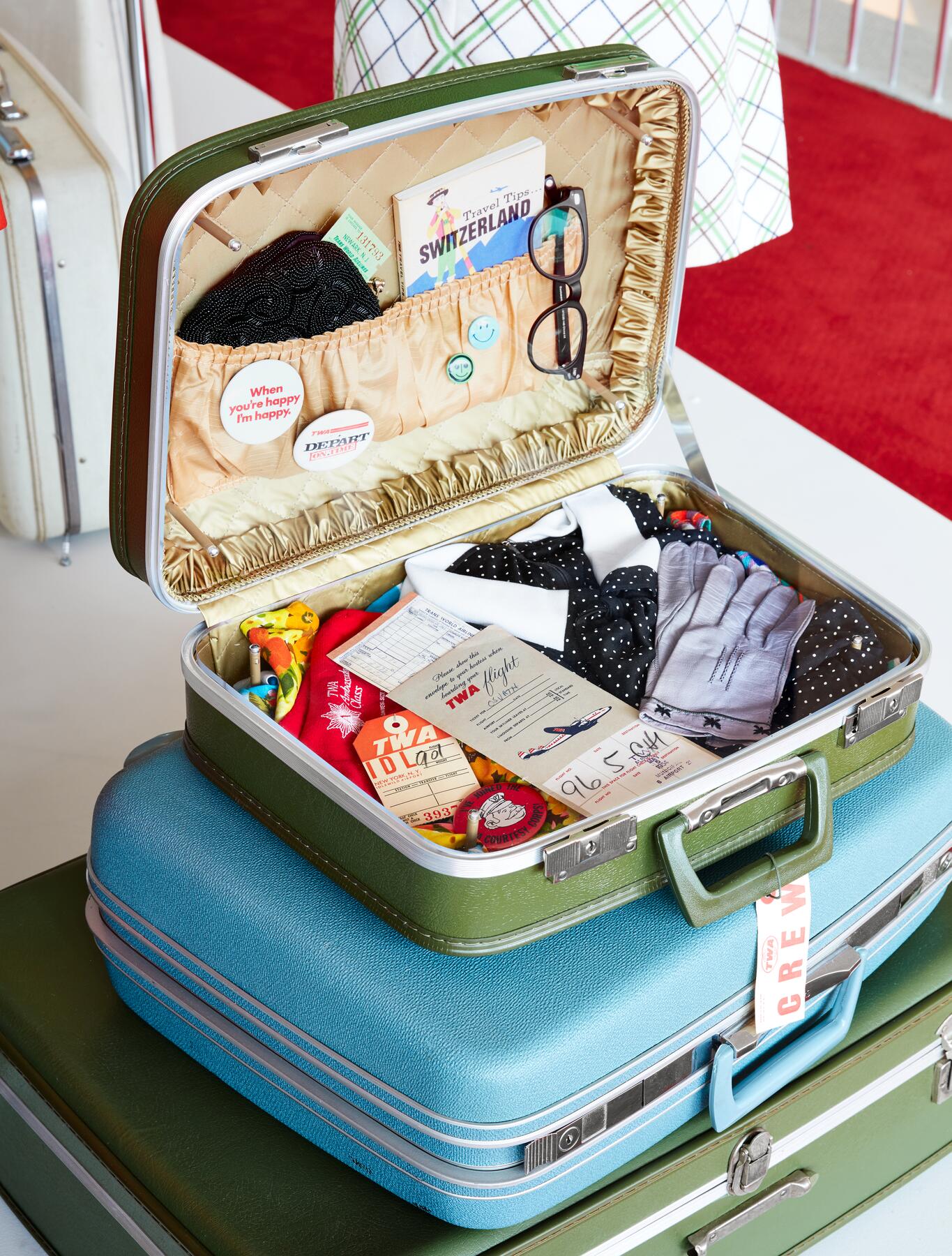 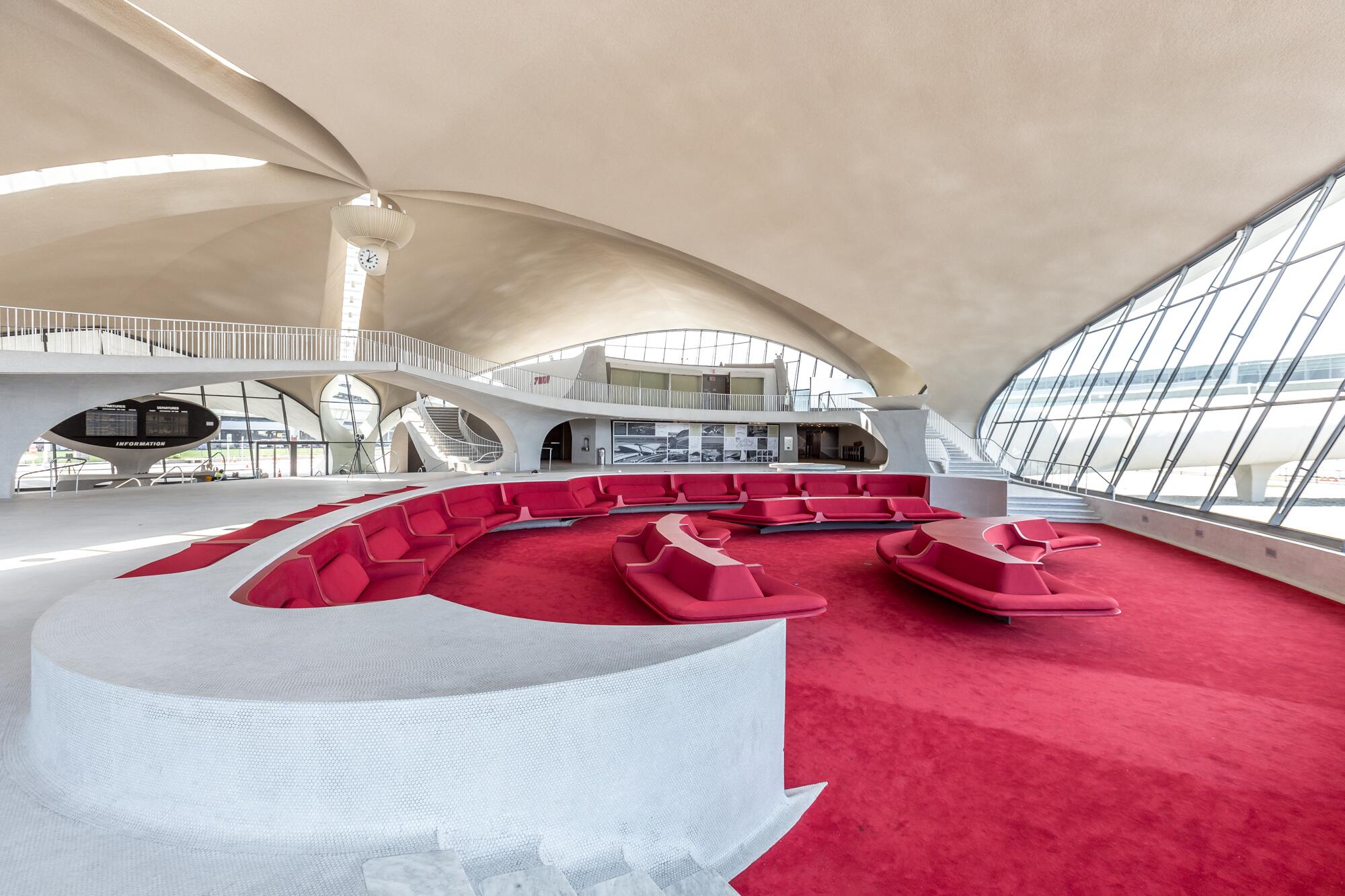 Flooded with light during the day from immense floor-to-ceiling windows or twinkling with lights at night, the Sunken Lounge in the center of the hotel is prime real estate during a lengthy layover. Visitors can sip pre-flight martinis and kick back in plush “chili-pepper red” comfort, rubbing elbows with nobody because there is plenty of room to spread out and relax.

The rooftop pool and bar overlooks one of the busiest runways at JFK, and provides an up-close and unobstructed view of the airport’s activities. Non-hotel guests can pay $25 for rooftop access to swim or to bask in the breezy whir of the runways, watching planes fly to and from all corners of the earth.

Parked outside of the main hall is Connie, a Lockheed Constellation jet that has been renovated into a mod cocktail bar outfitted with roomy airplane-inspired seating and servers that are dressed straight out of a TWA print ad.

For those who are interested in the history and influencers of the Jet Age, museum exhibits are scattered throughout the hotel and display a variety of objects and photographs. The collection of TWA uniforms is particularly eye-catching, as high-end fashion houses such as Ralph Lauren and Valentino had been enlisted to create unique designs for the invariably attractive stewardesses and pilots.

Visitors can have a sit-down meal at the Paris Cafe, a Jean-Georges Vongerichten restaurant, or grab a bite at the fast-casual Departures Food Hall. The hotel boasts the world’s biggest hotel gym and is an opportune place to spot the pilot who might be flying you on to your next destination.

Rooms are in keeping with the overall hotel theme, equipped with rotary phones and Tab in the mini-fridge. The pet-friendly rooms are shockingly quiet thanks to heavy-duty soundproofing, and some offer guests the pleasure of watching planes take off from the comfort of their bed. For travelers who have only the daytime to kill before the next flight, a day pass can be purchased for either four or eight hours and includes a room, access to the pool, and a workout in the gym.

One of the most charming aspects of the hotel is the extreme attention paid to even the tiniest details. Payphones line an alcove in the lobby, promising a connection and the highly satisfying novelty of winding in the numbers by hand for a mere 10 cents. Replicas of old TWA travel posters adorn the walls, the bright colors and bold imagery beckoning travelers to skip off to some formerly exotic locale like Kansas City. The signage throughout the hotel conforms to the 1960s time period, the most prominent being the two split-flap display boards rattling off imaginary departures. Even the furniture is a work of art—the Tulip chair found throughout the hotel is a classic modernist design and another of Saarinen’s creations.

The hotel is still a work in progress—there are plans to open more restaurants and lounges at some point in the future. Travelers are really starting to get wind of the place, so catch this airport refuge while you can.