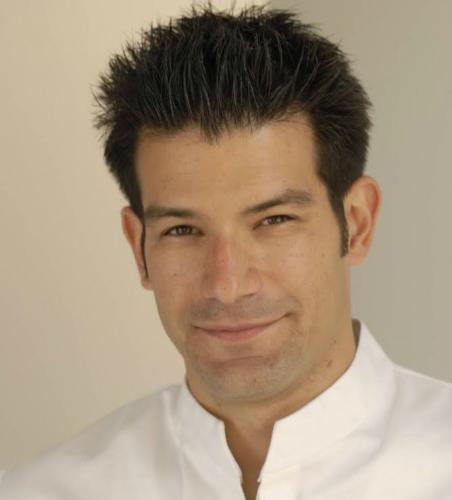 Next week, George Mendes, chef and owner of New York City's Michelin-starred Aldea, releases My Portugal: Recipes and Stories, a cookbook that follows him on both an actual road trip and a cultural journey through the country of his heritage. (Mendes was born in Connecticut and raised there by his immigrant parents.) With 125 recipes culled from family history and dishes of his own design, the book is meant to showcase the simplicity and range of Portuguese cuisine for the home cook, but never fear: If you're not handy in the kitchen, you can pick it up for the stories and the gorgeous photographs shot by Romulo Yanes, which offer up a feast for the eyes.

We recently chatted with Mendes about the best eats and activities in Portugal, why he loves fly fishing, and his favorite New York City pizza spots.

Portuguese cooking is regional. It's soulful, very traditional, very classical. It's based on a lot of grandmothers' recipes. Its larder consists of many ingredients that are used in Spain and in Italy and France, like olive oil and garlic and herbs and lots of seafood, especially salt cod. There's also a lot of cherry and a lot of sausage. But being that it's surrounded by the Atlantic and the Mediterranean, it definitely prides itself on oceanic offerings.

What was your favorite meal growing up?

I really enjoyed a simple omelette of parsley and linguiça [sausage] that my mother would make on Sunday afternoons. It was a midday snack that sometimes would become a sandwich the following day in the school lunchbox. She bought the sausage at the local Portuguese market in Connecticut called Fernandes Food Store. It’s still there.

What do you look for in a hotel when you travel?

Overall I just like a really small hotel that's centrally located, and it's even better if there are views, which Lisbon tends to have. My favorite in Lisbon is the Bairro Alto, a boutique hotel in the middle of the Chiado district. It's very small, and comfortable, and it's got a little rooftop terrace. The rooms kind of feel antiquish in a way, but I really look forward to a large, comfortable bed. I don’t really like staying in big luxurious hotels—I usually shy away from that.

What restaurants do you recommend when visiting Portugal?

My go-to place without fail every time I travel there—sometimes as many as two or three meals on the same trip—is Cervejaria Ramiro. It’s a bustling bistro-type setting—Portugal’s answer to a gastropub, basically—and it has the freshest shellfish and fish in all of Portugal, and I believe all of Europe. And then I always like to visit my friend Jose Alvillez at Belcanto,  a very creative and very avant-garde Michelin-starred restaurant. Also, Henrique Sá Pessoa is doing fantastic Portuguese cooking at Alma.

In the Alentejo region, which is about two and a half hours south of Lisbon, there's really great, rustic, peasant cooking: day-old bread, stews, and just really simple and homey grandmother’s cuisine. It’s a region of Portugal that is very undiscovered and very unknown to the world in a way. That being said, this region is a must-visit. O Chico is my favorite restaurant, serving up traditional Alentejo-region cooking. It’s family-owned, the owner is the chef, and he shares the task of running the dining room and the cooking. The last time I went there we walked in and he already had a spread of food on the table for us: Soft Portuguese sheep's-milk cheese, a series of açordas (basically bread stews with tomato and cauliflower),  sliced sausages, omelettes, pig’s feet, soup of purslane, it went on and on. It was amazing.

What would you do for nightlife in Portugal?

Lisbon is definitely the heartbeat of the nightlife of Portugal. You can go to a nightclub, but I like the fado, Portuguese folk music performed by a singer and a guitar player. Songs of sorrow and hope. It’s Portugal’s traditional music, and it’s really great to just grab a brandy or a beer after a long dinner and listen to the performances and wind down.

Does Portugal have a cocktail scene?

Not that I’ve really paid attention to or discovered. I think Portugal prides itself on its wine. You can definitely do wine tours, in the Porto Enduro region and the Dão region where my family is from, about three hours north of Lisbon. There's also the Alentejo region, my favorite wine region. The entire country is producing some of the world's finest wine, I believe.

Besides food and drink, what do travelers need to see in Portugal?

Architecture and beaches, especially in the southern Algarve region in Sagres or Lagos. The cliffs and the scenery are beautiful. You'll be driving on the cliff and below is the beach, especially in the city of Albufiera. There's also Nazaré, which is known for surfing, as is Guincho, close to about 20 minutes outside of Lisbon.

What's the one food you can't live without, and what's the best place you've ever had it?

I can't live without is pizza, and my favorite is Roberta's and Motorino, both in New York. I usually go for something that's tomato-based.

You are an avid fisherman. Where do you like to visit?

I go almost every other week. About two and a half hour drive to the Catskill Mountains, to the town of Roscoe, New York. It's nicknamed “Trout Town USA.” I've been going to the Farmington River a lot in Connecticut. This is all fly fishing. I'm obsessed with fly fishing because of the similarities of being in a kitchen: It takes a lot of technique and focus and concentration. There's an adrenaline rush when you catch something. It's not just about putting bait on a hook and throwing it in the water; you're actively hunting the fish and catching this beautiful trout in as little as eight inches of water. It's a lot of fun because even if you don't catch anything, you’re still in nature.

The farthest I've traveled right now has been Montana, which, simply stated, is probably one of the most beautiful states in the U.S. and a must-see for anyone who wants to travel. The region is known as Big Sky. In Yellowstone National Park, Yellowstone River is absolutely, stunningly gorgeous. We floated for six miles fly fishing and just caught like forty fish. I have an upcoming trip to Portland, Oregon but my ultimate is definitely going to Patagonia, South America, to fly fish there. Also Bali, a beautiful, hot, sunny place known for fishing, is on the agenda for next year.

What's the most unusual thing you've eaten in your travels?

Cod sperm. I had it at a Japanese restaurant that happened to be here in New York City. The chef served it and said, “Hopefully you get lucky tonight.” It was hilarious.

Besides Portugal, where would you go if you just want to take a relaxing vacation?

I really love the Bay Area, I gotta say. I love Napa Valley and San Francisco with restaurants like Coi by Daniel Patterson and Saison by Joshua Skenes. The ideal would be a leisure trip where there's good food, good scenes, and good weather.

Would you consider opening up a place somewhere other than New York?

I'm open to it some day. I'm in no rush. I have my hands full with Aldea, and a new restaurant opening on 29th Street and 6th Avenue this winter, a rustic Portuguese restaurant that's beer-driven and modeled after the cervejarias of Lisbon, with very simple cooking and a a raw bar. The kind of a place you can eat at every day . A lot of shellfish cooked over a wood oven, that kind of a thing. But yeah, I definitely foresee myself opening up a small restaurant in the countryside somewhere down the line.