Dine at this restaurant, and you're bound to walk away with quite the story.

The sound of clinking drinks and the haze of neon lights guided me through a dark passage and into Superfrico, a restaurant in The Cosmopolitan of Las Vegas. I locked gazes with an astronaut blinking a single large eye before noticing the purple and pink shades of neon bouncing off large hanging disco balls. Just ahead was the back of the stage of OPIUM, an adults-only, space-inspired show by Spiegelworld.

The host guided us to the left, and we entered the main bar, called the Studio. To the right was a long, glitzy bar with gold lighting where patrons ordered cocktails. Between a line of booths on the opposite side, a woman flicked through a crate of vinyl albums, looking for the next funky, hip-shaking beat to play. Later, I’d learn that Superfrico is home to the only all-women vinyl DJ crew on the Strip.

We continued on our leftward journey and into a dining room called The Artery, which looked like my childhood obsession with Lisa Frank. Whether sitting at a booth or a table, diners could feast upon colorful artwork and neon signs that adorned the walls from top to bottom. Upon closer examination, motifs of penguins, a Superfrico mascot of sorts, waddled through the one-of-a-kind paintings and drawings. I followed the flightless bird around the visually-dizzying spaces and became a character in the experiential narrative that Superfrico offers on a nightly basis.

The Las Vegas Strip is known to have some of the bawdiest theatrical shows like those created by entertainment company Spiegelword, such as Absinthe, the Atomic Saloon Show, and OPIUM. But such shows were not enough for the company that made a name as unique storytellers of the stage, and in September 2021, they opened their first restaurant, Superfrico.

The restaurant is what the brand calls “an all-sense overloaded dining experience.” Food, drink, design, music, and random live performances come together at Superfrico to create something different than the standard Las Vegas genres of dinner theaters and supper clubs. A visit to Superfrico is more like stepping into a story—one that’s spontaneous, mutable, outrageous, and changes night after night. And for an author like myself, I was happy to be written into it.

After we sat down at our table in the Artery, a waiter arrived, and we ordered a cocktail from a menu created by James Beard award-winning Principal Pourer, Leo Robitschek. The menu changes each season, but there are often twists on classic drinks, like the Cosmonaut of Las Vegas, a cosmopolitan with additional ingredients of sweet vermouth, amontillado sherry, chai tea, and clarified milk.

Robitschek said that “each and every cocktail has its own psychedelic edge,” and perhaps none more so than the Pizza Pie Negroni, made with beefeater gin, Campari, sweet vermouth, Roma tomato water, basil, and Castelvetrano. It’s an apt drink for a restaurant whose food is referred to as “Italian American Psychedelic.” Chef Anthony Falco, the “Pizza Czar” of the menu, took traditional Italian cuisine and infused it with global ingredients to create something new. 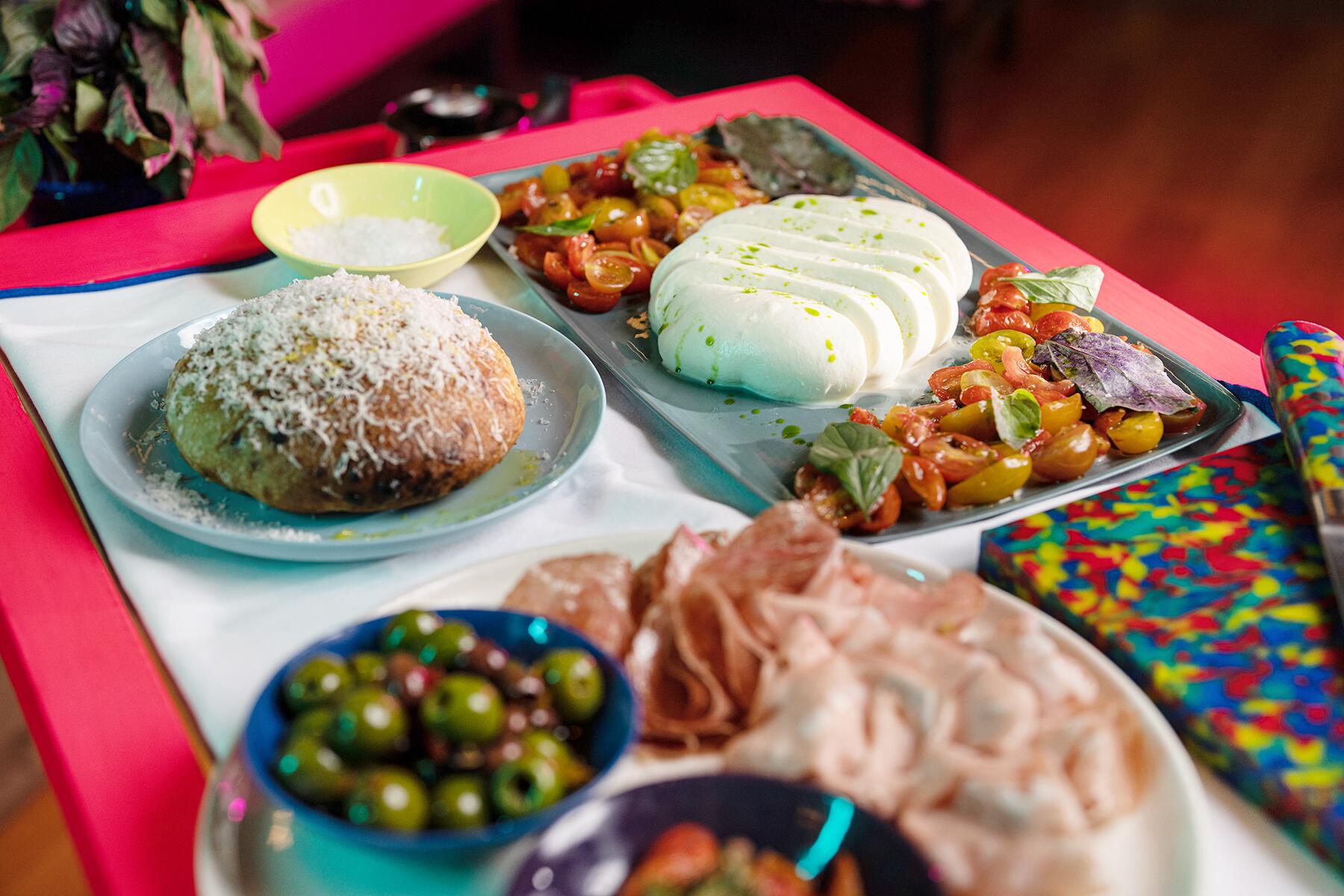 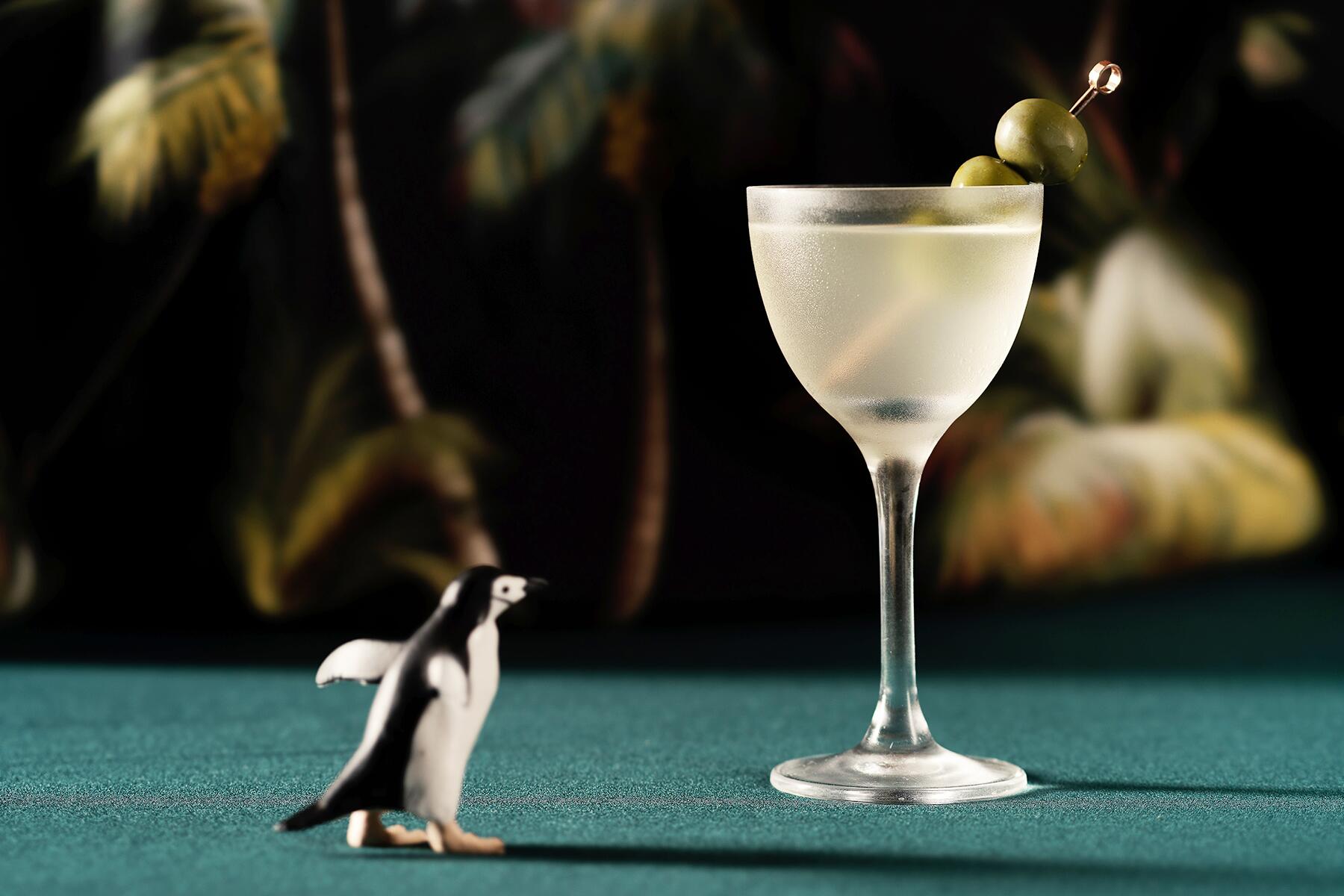 As we waited for our Hearts of Palm salads, two men approached the table holding a box. With white gloves, they opened the lid and revealed a collection of quirky forks before shoving a contract in my friend’s hands. “Fork salesmen” offed us their cutlery, some with curled tines, others incredibly tiny or outrageously large. One of the forks could be ours if we signed the contract with outlandish stipulations that even Rumpelstiltskin would balk at.

We were swept up in the story, so my table “bought” the gigantic fork and signed our lives away. I used it to indulge in Lamb Ragu Babbaluci, a pasta dish with lamb sausage, tomato, mint, parsley, lemon labneh, and za’atar.

Soon after, my favorite dish on the menu was served: square-shaped pan-sized pizzas named Ultimate Pepperoni, Pistachio Mortadella, Pineapple Bacon, and the OG Square. Covered in pistachio pesto, house mozzarella, mortadella, house Stracciatella, parmigiano Reggiano, and pistachio, the Pistachio Mortadella made for a delicious pizza. Like all the pizzas, the crust was thick, crunchy, and covered in cheese—a combination that sends diners into fits of orgasms. At least it did with a couple who sat next to us.

They groaned and moaned as they pushed the square pizzas into each other’s mouths. Strings of cheese and tomato sauce covered their faces as they tripped on the psychedelic ingredients. They were obnoxiously loud, and the entire dining room watched as they fell under the pizza’s spell, kissing and halfway undressing before running out of the room hand in hand.

The couple and the forks salesmen were not the only surprises of the dining chapter. A woman juggled balls of lights in a pink space-inspired outfit on a wall that separated The Artery and The Studio. A few tables over, a man in a top hat put on a dazzling display of bubble magic for another set of diners. At one point, a topless acrobat appeared on top of a booth and bent her body in odd shapes as people in furry creature outfits walked by.

After dinner, my friends and I wandered through the halls, stumbling past the Bottle-O store, which sells house-blended cocktails on the spot or to-go, and into a hidden bar designed like an après ski bar. Known as the Ski Lodge, the wood-heavy abode was low-lit with a digital view of a snowy landscape that covered the entire back of the bar. I grabbed a drink and cozied up in chairs covered in furry blankets next to a roaring fire, talking with other characters who had walked into this subplot of the Superfrico story.

Later, we made our way to a showing of OPIUM. After all, the raunchy space show with acrobats, vulgar jokes, and odd talents was located on the other side of the main bar. Following the comedic show, we mixed and mingled with performers, diners, and guests dancing to vinyl beats between The Studio, Ski Lodge, The Artery, and behind the OPIUM stage.

At some point, we stumbled into a hidden chapter, a tiny room that lurked behind panels of curtains. Not advertised to most diners, we’d entered a library of Spiegelworld history. Signs, books, art, tickets, photos, and vinyl records from different Spiegelworld shows and events covered shelves and walls and littered the floor like footnotes in the larger tale. Next to a spiral staircase in the room was a clawfoot bathtub of beer. We grabbed a few bottles and returned to the main storyline.

The night went on with dancing, laughter, and glasses of champagne that twinkled under the neon lights. Superfrico recorded every one of our individual experiences that evening until they bled together into a narrative that meandered, looped, and twisted into something special. You can try to read it on the front page of their website.

In the early morning hours, I extricated myself from the never-ending story and made my way to my room on the upper floors of the Cosmopolitan Hotel. As I crawled into bed, I realized that the fantastical tale of the evening would be far duller upon retelling it to others. Despite being an award-winning author and writer, I am only mortal, and the true story of Superfrico cannot be read—it must be lived.