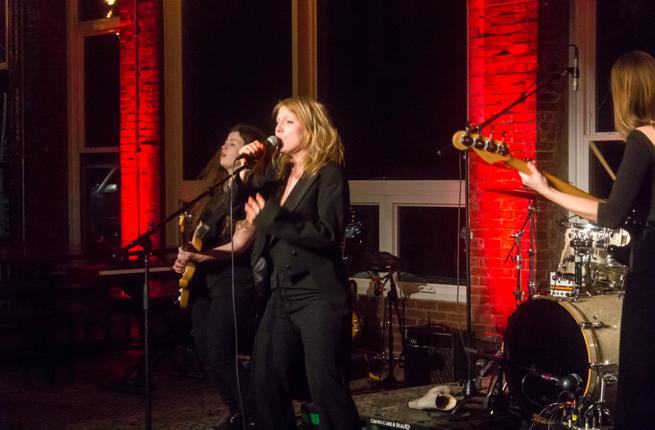 At first glance, Portland, Maine, in winter looks like small town America: white and gray, with industrial brick buildings in varied sizes populating downtown. Rebuilt in the 1860s after a fire destroyed most of its infrastructure, Portland takes great pride in preserving the Victorian architecture that now defines its skyline, lending a mindful quality to the businesses that occupy its spaces.

Up north, across the Atlantic and off Iceland’s coast, Reykjavik shares several qualities with Portland in culture and aesthetic. Both cities are a contrast of stark white and ultra-blue waters; they welcome tourists in droves during summer while only natives are tough enough to last the winters, and the residents of each are united by the brutal weather in a communal effort to survive while also having a good time.

These similarities were revealed after Icelandic shipping Eimskip began operating out of the International Marine Terminal in Portland four years ago, inciting a partnership that wasn’t just about trading lobster and blueberries but also about sharing culture. This eventually led to the formation of Sunaana, an Iceland Airwaves-inspired music and beer fest, created by key members of Portland’s community.

Trip Ideas Jennifer Ladonne The French Riviera Can Be Intimidating. Here's How to Experience It Like a Local
Continue Reading Article After Our Video

Instrumental in bringing Eimskip to Portland was Patrick Arnold, owner of the local port management company Soli DG. A musician himself and an entrepreneur deeply embedded in the local scene, Arnold took this opportunity to start sending musicians over to Reykjavik by ship. “Everywhere Eimskip would go, it would be about the culture and the community,” he said. 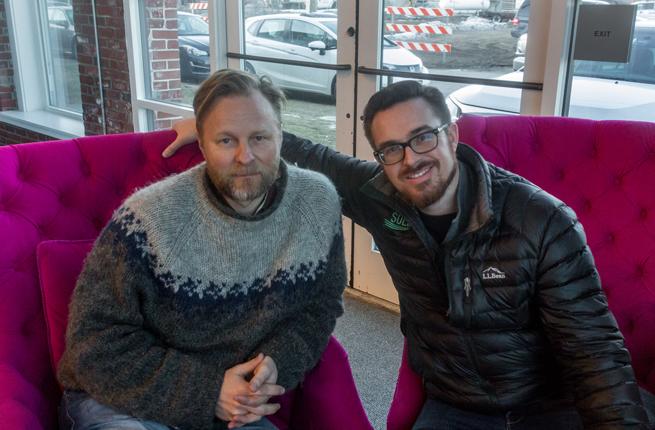 “For us, it was very important to grow not only the business between the regions, [but] also to create a cultural connection, to get artists to do exchanges, to get universities to work together, to get tourists to [travel]  back and forth,” says Isfeld. “Without a connection between Maine and [Icelandic] markets on multiple levels, business relationships are not sustainable. Business is built on trust, and trust is developed between people. By creating greater interactions within our geographic area, we build trust,” he says.

Isfeld convinced Arnold and a number of other members of the Portland community to take pilgrimages to Iceland, where they would attend the Iceland Airwaves festival in Reykjavik, which started in 1999 and is held every November (due to an increase in popularity they’ll expand this year to Akureyri as well).

“I thought this was a game-changing moment for Portland,” says Chris Thompson, owner of the historic Thompson’s Point, a 30-acre site and former 19th-century rail yard that houses the 30,000-square-foot brick-and-beam space that hosted this year’s Sunaana.

When Thompson learned of Eimskip coming to the US, he met with Arnold over coffee at local eatery Becky’s Diner, and was invited along on the pilgrimages to Iceland. Thompson felt at home, observing a kinship between Reykjavik and his native Portland, culturally and physically. “It feels like you’re living on a rock at the edge of the sea,” he says of both cities.

Together, Thompson, Isfeld, and Arnold, as well as Thompson’s Point co-owner Jed Troubh created Sunaana, a festival about discovery (what is Sunaana?) and embracing winter in Maine. 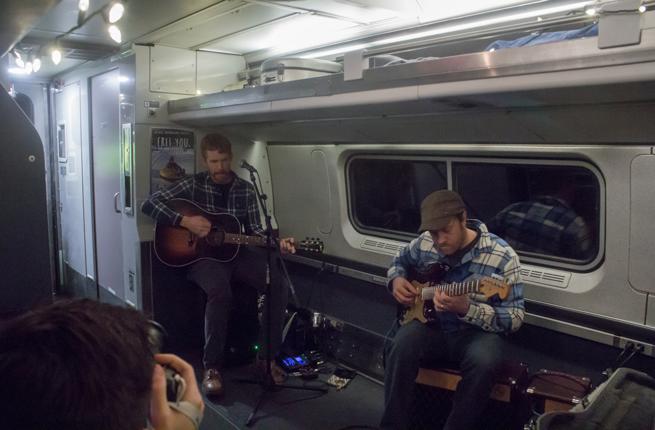 Conner Garvey on the Downeaster train from Boston to Portland, Photo: Rachael Roth

And embrace it they did. The weekend kicked off on the Amtrak Downeaster, where Maine musician Connor Garvey’s warm folk set filled the VIP car traveling from Boston’s North Station to Portland. Festivities continued the following day, which happened to be the coldest of the year. Inside the open-air, work-in-progress 1800s locomotive facility, Sunaana saw 20 different local and out-of-state breweries (curated by Bissell Brothers brewery, also on Thompson’s Point), a literal icebar, an acrobat dangling from the ceiling between musical acts, and 12 different artists. The lineup was formed by musician Darren Elder, who owns The Halo Studio in South Windham, Maine. 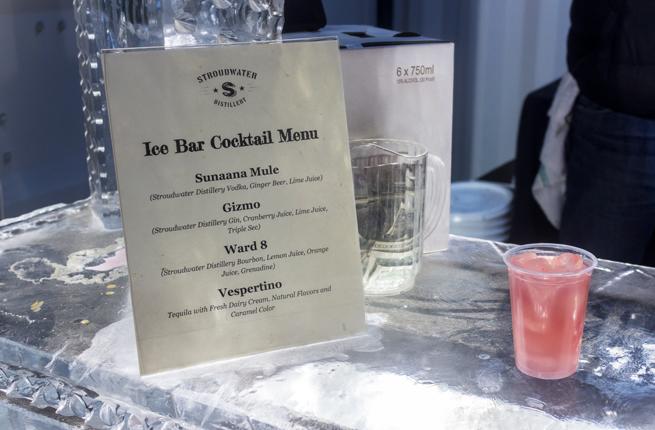 “This state is not for those with a weak constitution,” says Elder, though he admits that he’s freezing today. Still, he’s in high spirits. “I’m hoping to be a needle and thread to bring people back together, and this is something that does that. Music does that. Nobody in there is talking politics tonight.” 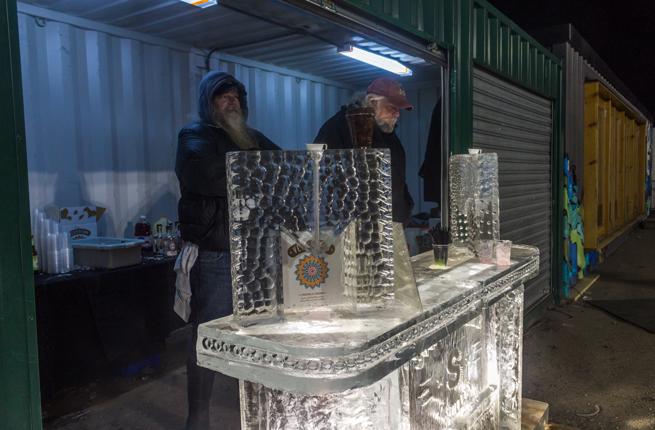 He’s right; despite the -4 degree wind chill outside and the frigid air permeating the venue, the crowd is jovial, (the IPA’s definitely help), absorbing entrancing local and Icelandic acts (several are also from nearby U.S. cities), from Reykjavik’s Mammut to headliner Rozes. 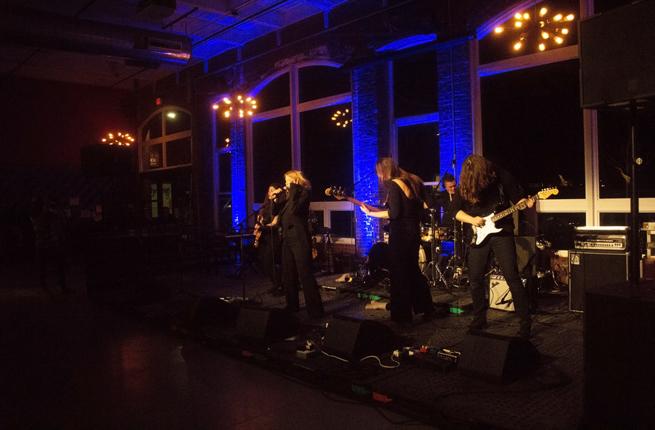 “In the winter [in Iceland] there’s such a great contrast because everything is dark and gloomy; the weather is terrible for 6 months, so if you don’t do something, you just get depressed. When you’re warm, when everything is good and someone comes to play for you, you don’t really get as engaged. But when someone comes to play and you’re freezing cold, and they’re great, you stop feeling cold,” says Larus Isfeld. “The experience is so mindblowing because of this big contrast.” 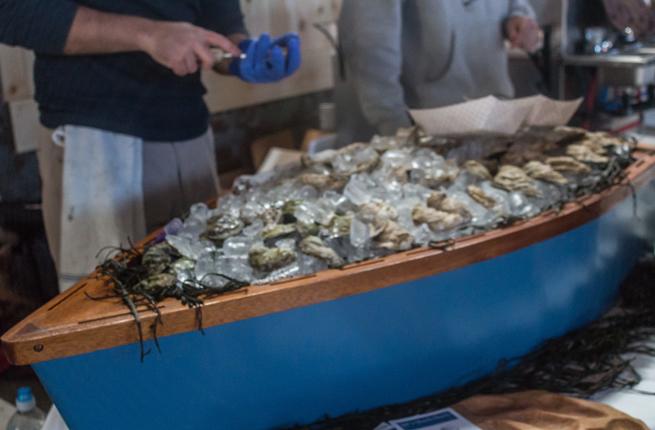 Iceland Airwaves started in an airplane hangar, and now utilizes spaces across Reykjavik. Similarly, the Sunaana founders hope to use downtown’s historic buildings, repurposing spaces throughout Portland. But this year, they started small, as they continue to figure out what exactly they want the festival to be.

“The whole point is to be about discovery,” says Arnold. “The bottom has dropped out of the music industry, and art in general. It’s hard for artists to make their way. If you lose the entry level, you’re losing a lot. Society can take that for granted; we’re not interested in taking that for granted. Sunaana—what is it? It’s a question we constantly ask, and it’s defined by the artists who show up.” 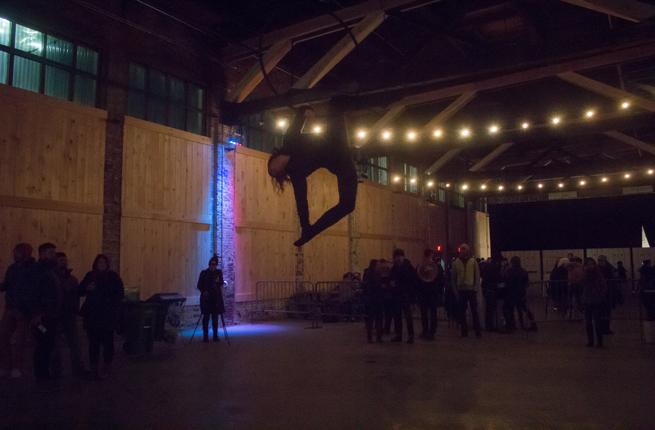 Later this year the Sunnana founders will send Connor Garvey to Iceland on a boat leaving from Maine’s Port Authority, on which he’ll record an album. Each place the boat docks, Garvey will collaborate with a new artist, further driving home the idea that not only goods, but also live art, can be shared overseas.

Where to Stay: The Press Hotel. Owned by Jim Brady, who also attended the pilgrimages to Iceland Airwaves, the boutique Press Hotel, part of the Marriott’s Autograph Collection, is housed inside the former Press Herald building on Exchange Street. Part of Portland’s historic register, Brady was only allowed so many modifications to the building, so it’s replete with industrial ‘20s charm. A newspaper theme is also found in the decor throughout the hotel. Cozy up by the fireplace after hours for a giant game of Scrabble and while sipping cocktails.

Where to Eat: You can’t really go wrong with food in Portland, ME (their culinary scene is off the charts), but for breakfast and lunch, try Dutch’s retro diner-style deli offers delicious breakfast and lunch sandwiches and pastries. For dinner? Worth the usual hour-long wait, Boda serves hip authentic Thai food for one of the best dinners in the city. 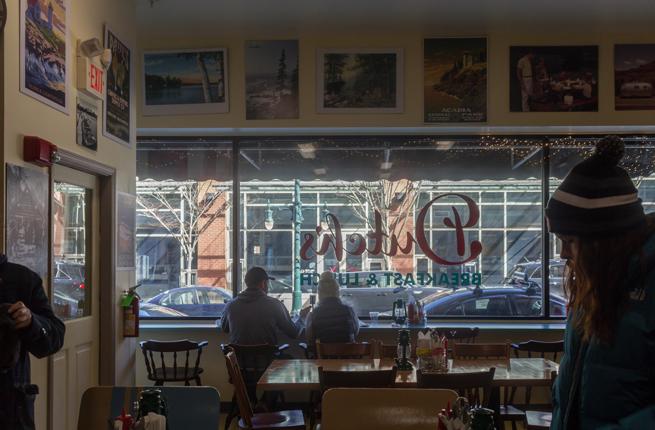 Where to Drink: Bissell Brothers brewery, in one of Thompson’s Point’s industrial brick buildings is perfect for an afternoon brew or for staying out late. A favorite to locals and tourists, they serve deliciously hoppy brews in a their large-windowed taproom. Hunt & Alpine is a classier joint for cocktails and insanely good popcorn (it’s topped with butter, green chilli powder, and parmesan). 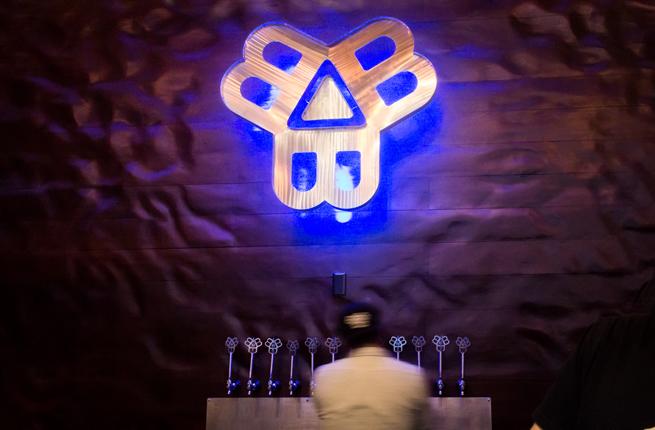 Where to Shop: Enterprise Records: this intimate gem of a shop on Park Street has been selling only vinyl since 1987.

What to do: Ice skating on Thompson’s Point: Formerly part of the Union Station rail depot at the end of the pier, this steel structure sat previously untouched since the ‘70s. When Chris Thompson and co. (he started the Thompson’s Point project with his late stepfather) stripped away debris, they found the architectural wonder underneath. Rather than building around the structure, they decided to make it a permanent open space. Here they host summer concerts; in winter it becomes an ice skating rink. This project jump-started the revitalization of what’s now Thompson’s Point.