Jackson Square’s street performers are New Orleans institutions, as iconic to the French Quarter as Bourbon Street or the St. Louis Cathedral. But what happens to these entertainers when the streets are empty?

For more than 20 years, JT Canko has been reading tarot cards in Jackson Square, the plaza that sits at the base of St. Louis Cathedral and serves as the figurative—and geographical—heart of the French Quarter. Before the novel coronavirus hit the city in alarming numbers this spring, bringing tourism and outdoor gatherings to a standstill, Canko woke every morning at dawn to claim her spot on the square’s corner, where she enjoyed being the first thing many tourists saw that day.

“The mornings on Jackson Square are the most magical times of the day,” Canko says. “Before the city wakes up, I watch the momentum and the energy of the square build—the buskers and magicians; the musicians and bucket kids; the pirates, the living statues, and the artisans.”

Each morning, Canko and her hodgepodge community of entertainers would drink coffee together and check in on each other before beginning work for the day. Spending so many hours out among her community, Canko has come to consider Jackson Square her home. “We get to be part of a living organism that is New Orleans.”

Designed by the French in the 1700s, and the site of the Louisiana Purchase signing, Jackson Square has been best known in recent decades for the lively scene of artists, performers, and musicians that crowd its cobblestones: some of the most creative, energetic people in a widely creative, energetic city. Jackson Square’s street performers entertain and enthrall the crowds of tourists that descend upon the city each year, especially during spring, when a season of festivals and celebrations starts around January and continues until the Louisiana heat becomes unbearable.

“Before the city wakes up, I watch the momentum and the energy of the square build—the buskers and magicians; the musicians and bucket kids; the pirates, the living statues, and the artisans.”

“I believe Jackson Square is the soul of New Orleans,” Canko says. “I really feel like an ambassador to my city. I don’t just read cards. All hours of the day I’m giving directions: ‘Where’s Cafe du Monde?’ ‘Where should we go eat?’ ‘Where’s a clean bathroom?’ I’m an information booth; that’s part of my job.”

This season, of course, things went a little differently. On March 20, after a week of escalating social-distancing measures aimed to stop the spread of COVID-19, the New Orleans mayor issued a stay-at-home order that effectively shut down Jackson Square. Save for New Orleans’ houseless population—those with no home to return to—you’ll find the French Quarter largely empty these days.

“I’m so connected to Jackson Square,” Canko says, “that when I go to sleep and I dream, the soundtrack of the background is New Orleans brass. I’m used to having a brass band to the right of me; a juggler, a Lucky Dog cart, and a magician to the left of me. I miss my community.”

Canko, who lives close to the Quarter in the Marigny neighborhood, lost her father while under quarantine. Having to mourn alone was incredibly difficult for her. Normally, she would have been out on the square the next day, crying with her community and welcoming their hugs. “That’s my family,” she says.

Canko’s art is much older than the city itself. Tarot cards first appeared in Italy in the middle ages (early 1400s), when Canko says the cards were both a playing game (tarichi) and a tool for reading into life. The pagan myths—and agricultural leanings—of that time period influenced the symbols on the cards and the parables they give us today.

Likewise, the types of clowning and miming you’ll see on contemporary Jackson Square have older origins—roots in ancient Egyptian, Grecian, and Roman theater, 17th-century Italy, and 19th-century England. The performer “Rose”—who prefers to go by a stage name—first studied as a professional actor in Chicago. It took a chance opportunity—to study masked clowning in Northern Italy—for her to discover that the street was the performance space she craved. 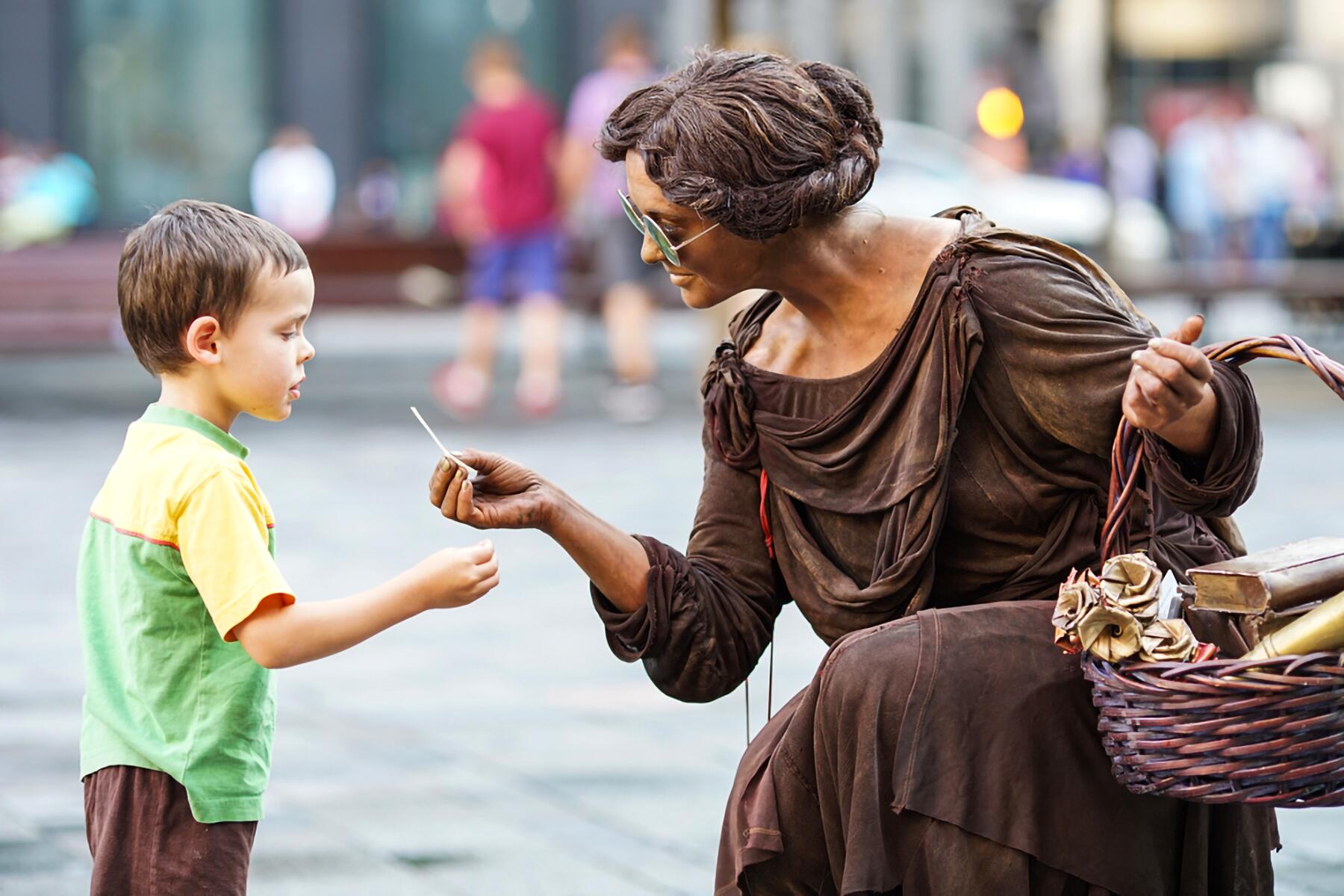 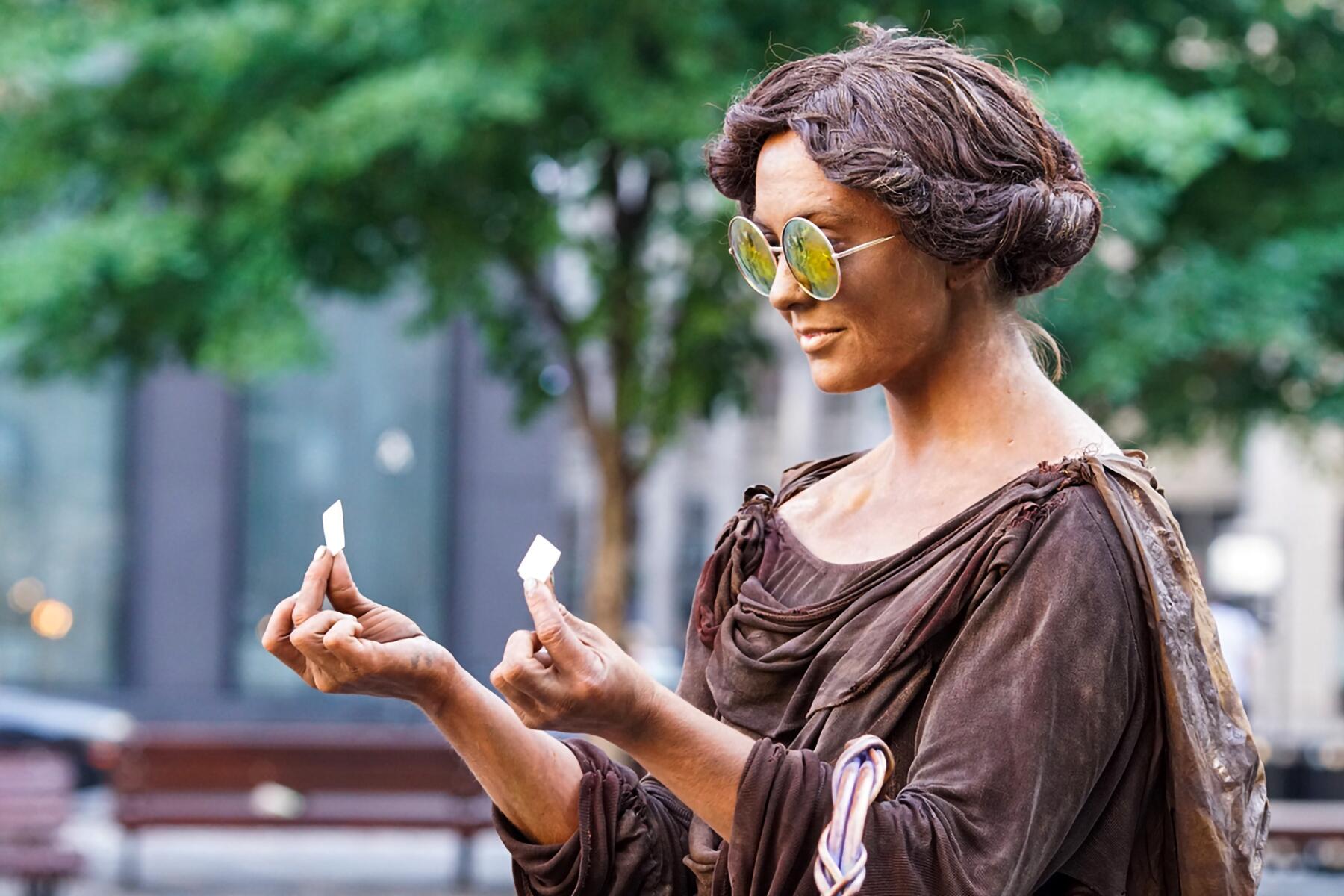 “That’s where I realized the opportunity in the guerilla theater experience,” she says. She liked that street theater wasn’t just for a “theater-going” crowd. Rather, it brought the performance to the audience—whether they liked it or not. Soon after leaving Italy, she created the character of “A Rose Moment,” a bronze “activation” statue who comes to life when a passerby puts money in her box. In return, Rose bestows the audience member with a note—the kind you might find in a really good fortune cookie.

Rose says most people don’t realize how much of an illusion a living statue presents. Passersby constantly marvel at her ability to stay still for hours (how does she itch her nose? How does she go to the bathroom?). In reality, on a regular crowded day, Rose gets to “activate” every 10 minutes or so—she otherwise takes breaks whenever she feels like it. But the mystery is part of the act. Over the years she has spent on Jackson Square, Rose has seen all sorts of reactions to the experience.

“I miss the positive energy of a crowd of happy people watching me. Now that it’s gone, I realize how much a part of my happiness was based on daily doses of supercharged human interaction.”

“There was something about Rose that really spoke to so many different demographics of people,” she says. “I’ve had large Harley Davidson motorcycle groups, big dudes with mustaches and sunglasses, giggle like a little girl when I come to life.”

Sometimes Rose’s notes brought out emotional reactions in passersby, reminding them of something going on in their own lives that they then shared with Rose. “I’ve shared so many beautiful tears with total strangers that I would never see again,” she says.

In street performing, this interactive element is essential to the art. “The fascia of the moment is created by the other person, depending on how they react,” Rose says. This need for strangers, and their in-the-moment reactions, makes it hard to simply transfer street acts to a virtual platform.

“I miss the positive energy of a crowd of happy people watching me,” says Dusty Campbell, a Jackson Square magician and clown. “Now that it’s gone, I realize how much a part of my happiness was based on daily doses of supercharged human interaction.”

The weekend of March 17, amid growing virus anxieties, Rose went to Petco and purchased a pair of foot-long tongs—the kind used to feed snakes. She worried that tourists would avoid interacting with her because of germs, and figured she could use these to dispense her signature notes to the crowds. As it turned out, of course, this wasn’t enough—Jackson Square cleared out a few days later—but such solutions aren’t out of the question for the coming months, or whenever normalcy trickles back into places like Jackson Square, when some health precautions (and fears) are sure to carry over. 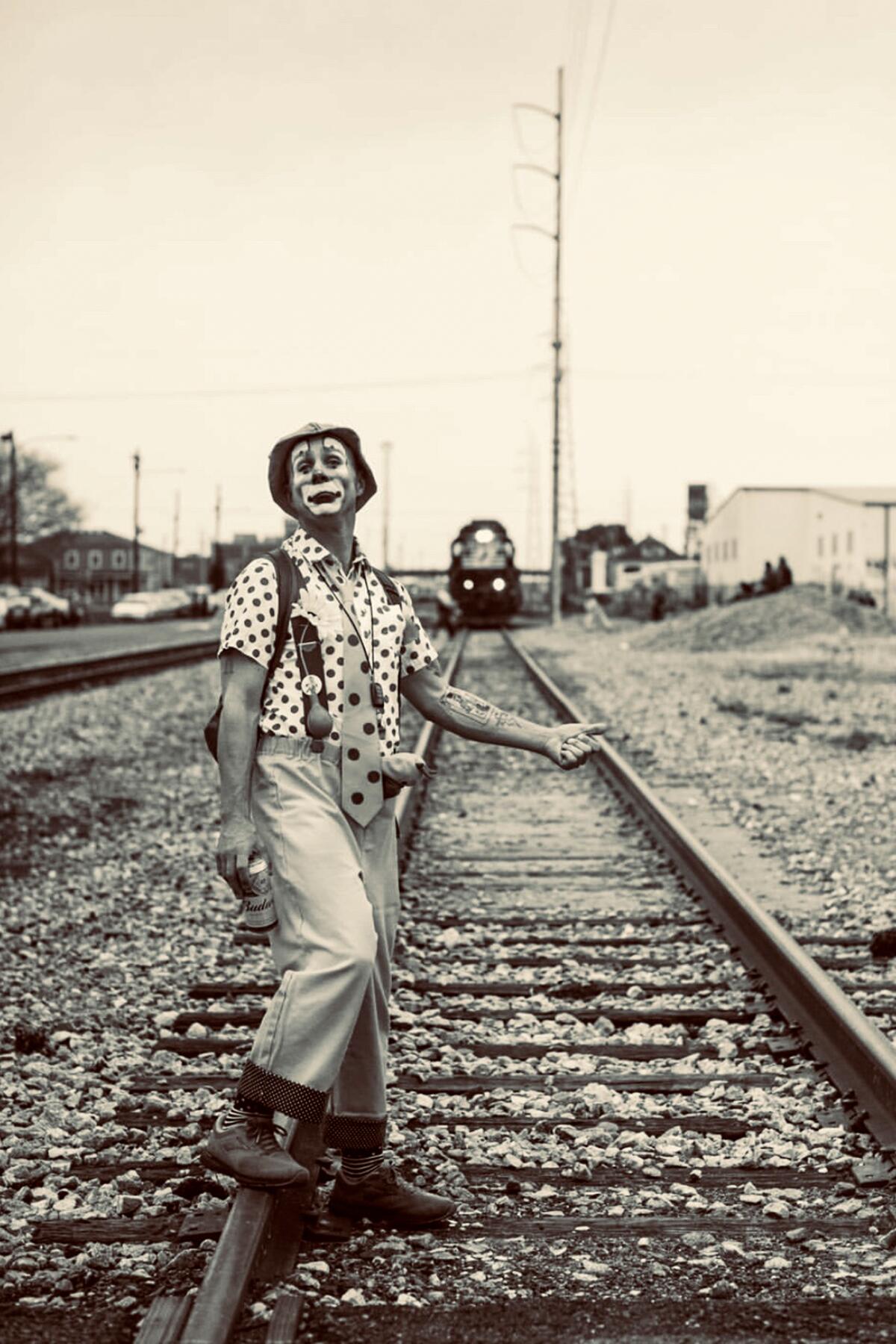 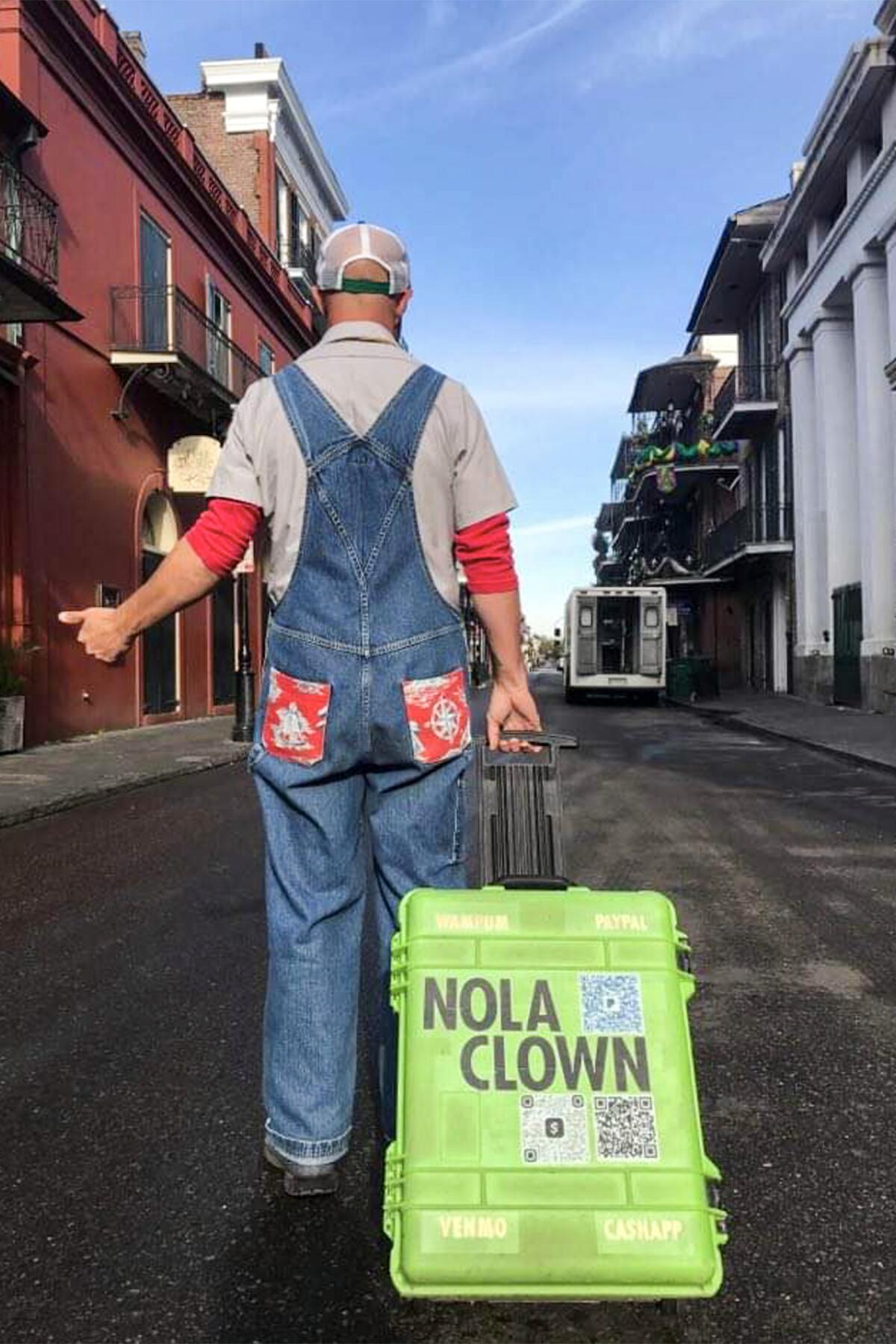 “I think about how much of my show involves touching, and it scares me for the future,” says Dusty Campbell. “Quality street performing is about gathering people up and getting them to stand as close together as possible. That’s literally the heart of crowd making…anyone who’s done it long enough can tell you there is a huge difference between a group of people standing around in proximity to one another, and a ‘crowd.’”

Dusty does some smaller performance work, but it’s not the same as street theater. “It will be very interesting to see how this affects my ability to perform,” he says.

In the meantime, street artists are finding other ways to occupy their time. “I’m spending a hell of a lot of time in meditation,” Canko says. She’s also learning a new tarot deck, a gift to herself on the winter solstice: the second edition of Salvador Dali’s tarot cards. This is a special deck that the Surrealist illustrated himself, mostly with collages. Canko has done a few readings over video calls, so far, and mostly for her regulars.

Dusty is also taking the time to study his craft. “Since the world hit pause, I’ve been living like a contented six-year-old alone in their room with their favorite toys,” he says. He’s also taking part in the “Big Easy Busker Bonanza,” an online performance space for the New Orleans street artists and their audiences stuck at home.

“All of quality street performing is about gathering people up and getting them to stand as close together as possible.”

Rose doesn’t see herself back in Jackson Square. She had plans to leave New Orleans to go back to school for drama therapy, and the crisis accelerated her move (though the school part is on hold).

She is finding moments of performance, though. Back at her dad’s house in Colorado, a few friends recently hired Rose to perform for their mothers—at a safe distance, of course. Rose showed up on the front lawns of the mothers’ houses in full costume, bearing Love Actually-style signs and strumming songs like Louis Armstrong’s Smile from her ukulele. She calls these her “Mom-a-Rona-Grams.”

“Clowning, in general, is funny, but I also think it’s a little sad,” Rose says. “Having realized that, I thought, ‘Oh right, this is actually the perfect time for a clown.’”

Even a seasoned tarot reader can’t predict exactly what the future will look like for Jackson Square’s street performers. Over the years, Canko says her readings have become more situational. She’s more prone to tell you how you might deal with life, rather than exactly what will happen to you.

“For me, that’s the experience of life,” Canko says. “It’s about how you handle it—with dignity and grace, and to your highest good.”

Perhaps some wisdom from Rose will help, though. Among the forty notes in the box, some of her favorites include: “No matter how cruelly the cold ravishes the earth, the spring always forgives winter,” “Respect is what we owe, love is what we give,” and “Everything is temporary.”