News Apeksha Bhateja India Is Experiencing a Brutal Heatwave. Here's Why It Matters to You

10 Years after Katrina, New Orleans Is More Vibrant than Ever Before 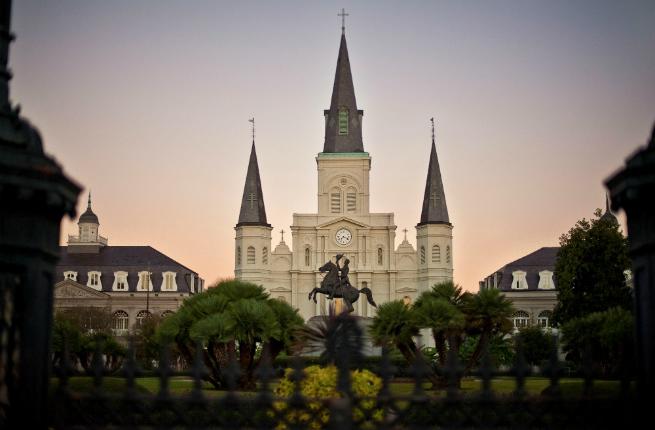 I made my first trip to New Orleans in late July, a month shy of the tenth anniversary of Hurricane Katrina. While waiting to board my flight at JFK, my thoughts drifted to the New Orleans Jazz Orchestra performance I'd seen earlier this year at Lincoln Center, where band members jumped off the stage and into the audience during the encore, exuberantly marching through the aisles as they blew their brassy horns. Beyond that, my impressions of New Orleans were inexorably tied to colorful images of Mardi Gras and antebellum mansions mixed with CNN footage of a city submerged in water in the wake of the deadly storm that bore down on the Big Easy on August 29, 2005.

Within a few short hours of landing at Louis Armstrong International, a palpable dynamic began to emerge: There’s a “pick yourself up by your bootstraps” mood that makes the city more upbeat than ever. Like a carnival queen poised for the big parade, New Orleans today exudes tremendous warmth and a fierce hometown pride.

My driver from the airport treated me to a mini-tour, happily answering even the most cliché questions from this first-time visitor.

“It’s one big party. People come from all over the world!”

“Have you ever tasted alligator?”

“Who do you think makes the best beignets in town?”

“That’s a tough one, but I’d have to say Morning Call.”

Equally enthusiastic was my greeting at The Old No. 77 Hotel & Chandlery, a new industrial-chic retreat inside a renovated 1854 warehouse in the Central Business District. In classic Southern style, the porter took my hand as I exited the limo and a beaming concierge boomed out a hearty “Welcome to New Orleans!”

News Apeksha Bhateja India Is Experiencing a Brutal Heatwave. Here's Why It Matters to You
Continue Reading Article After Our Video

An intense bond often emerges in the wake of tragedy, a camaraderie that comes from the realization that you’re all in it together. A decade after the floodwaters receded, the memory of Katrina and an eagerness to create something new keeps New Orleanians engaged and united in a way I haven’t experienced since the aftermath of 9/11 in New York City.

I had family and friends who narrowly escaped when the Twin Towers fell. In the weeks that followed, I took long walks through Central Park, simply trying to absorb how surreal and ruthless it all was. The events of 9/11 made me feel a profound commitment to New York City. I thought, if having this kind of diversity and mind-blowing mix of attributes means I have to live a riskier life, so be it. I imagine that many New Orleanians felt the same after the hurricane.

New Orleans lost over half its population in the year following Katrina. By July 2014, its population was back up to 384,320—a rebound of 67 percent since 2006. Many of those who returned have started local businesses—large and small—to help reinvigorate their beloved city.

“NOLA has this crazy energy that’s always been a part of the fabric of the city,” said Jeff Hinson, Account Director at 360i, an advertising firm that works alongside New Orleans Convention and Visitor’s Bureau to promote local tourism. “People came back wanting to bring something new to New Orleans and New Orleans has given them so much in return.”

Today, there are nearly 30,000 hotel rooms in the Crescent City—10,000 more than at the end of 2005. There are also 600 more restaurants than a decade ago, and NOLA’s string of James Beard award winners has continued unabated. Viking River Cruises plans to open its first U.S. office here in 2017, with two ships slated for Mississippi River cruises. What’s more, according to the Data Center research group, the business start-up rate in New Orleans exceeds the nation’s by 64 percent.

Kevin Farrell and Nick Vivion are two of the city’s new trailblazing entrepreneurs. Kevin attended New Orleans’ Loyola University; he left for Seattle after his home was destroyed, yet wanted to return. When he met Nick at Burning Man in 2008, the two decided to start a restaurant to assist with the city’s recovery. Kevin and Nick’s brainchild, Booty’s, which opened in the burgeoning Bywater neighborhood in 2012 with a menu of craft cocktails and street food inspired by Nick’s adventures as a travel journalist, quickly became one of the city’s most popular restaurants. The pair’s second restaurant, Ursa Major, opened to glowing reviews this past spring in the budding South Market District.

Sara Howard, a waitress who fled to Austin with her two young daughters and Great Dane, also returned here to start a kayaking company with her partner, Sonny Averett. Today, Kayak-iti-Yat offers guided kayaking tours along Bayou St. John, a long-overlooked recreational waterway that runs through the scenic Faubourg St. John and Parkview neighborhoods. Paddling past historic homes and churches, Sara and Sonny regaled me with their local knowledge and pointed out swaths of land upon which the city’s iconic Southern Live Oak trees, uprooted by the storm, have been replanted by local environmental groups.

And then there’s Teddy Schiro, my bike-tour guide from Free Wheelin’ Bike Tours. Teddy’s cousin, Ryan, started the company five years ago to show the world the beauties of his home city and hired only local family and friends. It helps that New Orleans has built more than 100 miles of dedicated, paved bike lanes in the past decade—only five miles existed before 2005—enabling Teddy to lead me through Treme, Mid-City and Faubourg St. John on a “Creole & Crescent” tour.

For every story like Kevin, Sara, and Teddy’s there are hundreds, if not thousands, more. And new attractions are popping up almost monthly. The state-of-the-art Jazz Market, a 600-seat performance hall for the New Orleans Jazz Orchestra and other top acts, debuted in April in a once-dilapidated department store and includes an extensive jazz archive, rehearsal space, and the sleek Bolden Bar, named after Buddy Bolden, a legendary cornetist who lived five blocks away. The twenty-acre Crescent Park was unveiled last year along the riverfront in the Bywater and the Lafitte Greenway, the city’s equivalent of New York’s Highline, will be completed in September. New Orleans’ streetcar network is undergoing expansion, too, with additional lines planned for the French Quarter as well as St. Claude Avenue.

Of course, not everything is rosy in New Orleans. The city’s crime rate continues to make headlines, though tourists are rarely the victims. The Lower Ninth Ward, the predominantly African-American working class neighborhood that lies below sea level and was the worst hit by the hurricane, is still experiencing a painfully slow recovery. And the influx of entrepreneurs has driven housing prices up, compromising the unique blend of race, class, and culture that makes New Orleans so exceptional.

But the best parts of New Orleans haven’t changed: you can still walk down dimly-lit alleyways and see ornate wrought-iron gates hugging historic French-Spanish buildings, or come across a group of school kids breaking into a full-on jazz quartet on a street corner. And, locals and visitors alike will tell you that there’s more to see and do now than in the years before Katrina.

My last day was a steamy one, with temperatures reaching a sweltering 94 degrees—typical for New Orleans in summer. I woke before dawn to watch the sun rise over the Mississippi River from the levee in front of the French Quarter. When I returned my bike at Free Wheelin’ on Burgundy Street, I spied a giant map covering the far wall, with pushpins marking nearly every city, state, province, and country in the world. Teddy told me that each pin represented a visitor they’ve taken on a bike tour in the last five years. Below the map, hundreds of neon Post-it notes, scrawled with messages of thanks in dozens of languages, created a paper patchwork quilt of gratitude.