Florida pays tribute to an author who found her greatest fame after death.

The Sunshine State lays claim to a host of writers who at one time or another resided and created there, but rarely does it honor them in public spaces. An improbable exception is an unconventional Black woman whose prose earned criticism from both white and African American readers during her lifetime. Her short stories, novels, plays, and non-fiction were nearly consigned to the dustbin of literary history until another powerful Black female author shone a light on them once again.

Today, the multitalented Zora Neale Hurston is recognized not only in what she considered her native state but also across the globe for her works detailing southern Black life in the early 1900s. 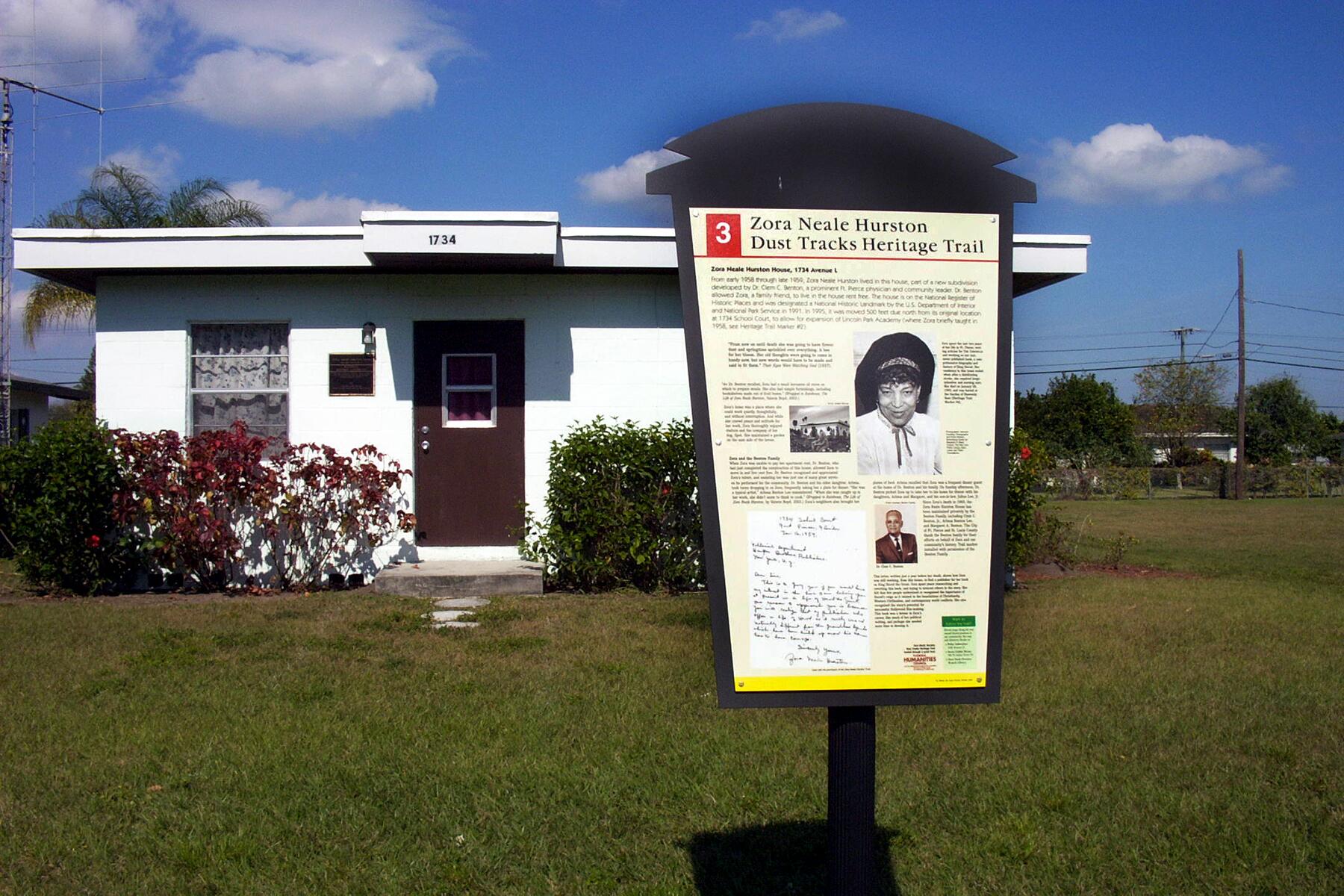 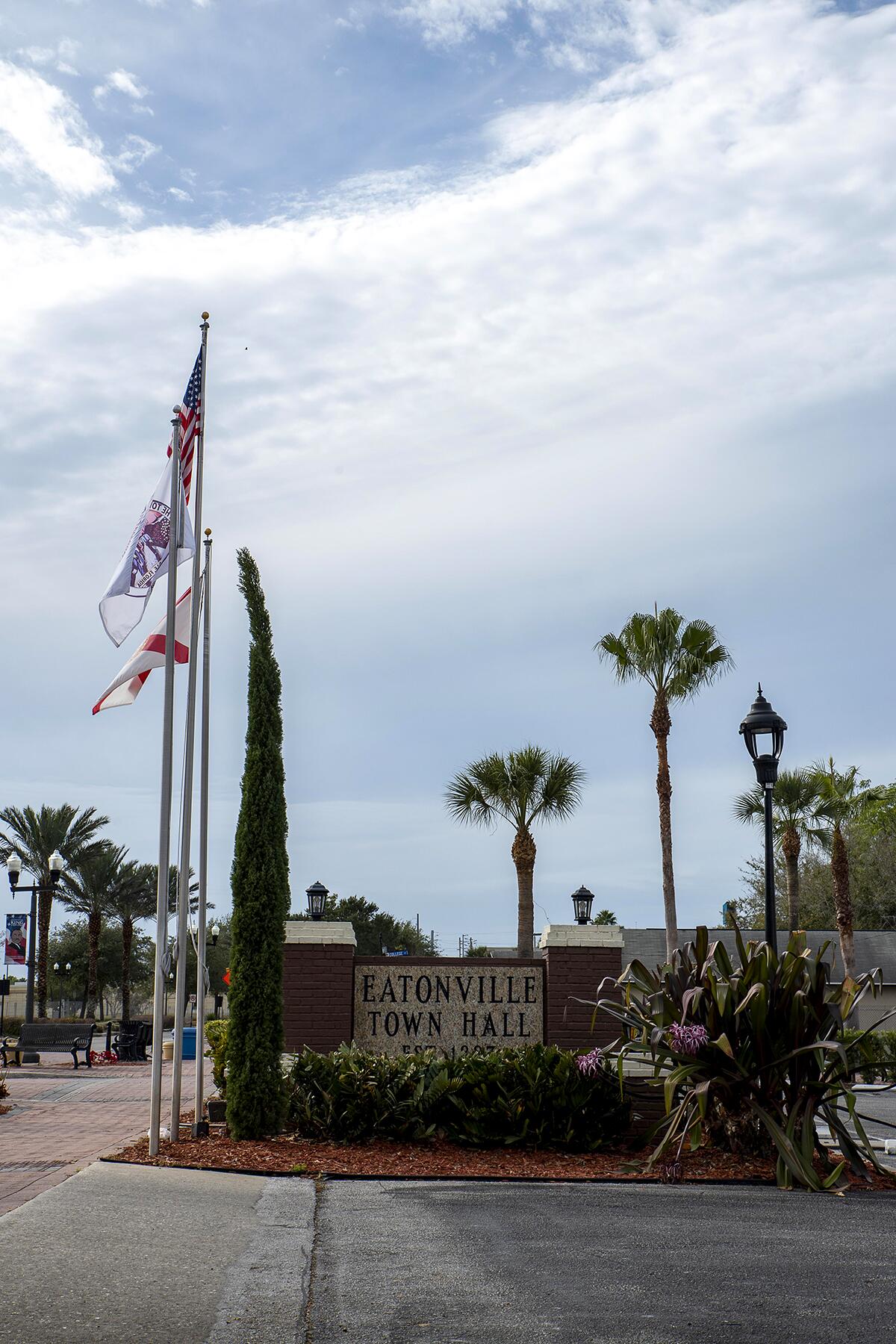 Born to a formerly enslaved sharecropper father in Alabama, Hurston and her family moved to Eatonville, Florida, when she was a toddler. The small town, 10 miles north of Orlando and incorporated in 1877, is the oldest municipality established by African American freedmen and women in the U.S. Hurston went on to become the first Black female graduate of New York City’s Barnard College in 1928, then pursued further studies in anthropology at Columbia University.

During her time in New York, Hurston allied herself with the Harlem Renaissance, the 1920s-1930s revival of African American culture and politics centered in Upper Manhattan. Her most well-known book, Their Eyes Were Watching God, came out in 1937, and these days is often included on the required reading lists of numerous high schools and colleges.

At the time of its publication, though, author Richard Wright panned the novel for its portrayal of Black female sensuality as well as Hurston’s writing dialogue in dialect, which he considered a tradition forced upon Black people and a “minstrel technique that makes the ‘white folks’ laugh.” Hurston also got into it with poet Langston Hughes. Their dispute over copyrights for their play Mule Bone is the subject of a podcast from the America Writers Museum, called Dead Writer Drama.

Hurston passed away impoverished in 1960, laid to rest without a headstone in Fort Pierce, Florida, her residence for the last few years of her life.

Alice Walker, who went on to become the first African American woman awarded the Pulitzer Prize for fiction for The Color Purple, penned a piece for Ms. Magazine about her quest to locate Hurston’s grave. The article sparked renewed attention to and subsequent appreciation for Hurston’s work, influencing many contemporary writers, Walker among them.

In 2018, not quite 90 years after it was rejected for publication, her nonfiction book about America’s last slave ship, Barracoon, was published, with Walker supplying the forward. A collection of her stories, Hitting a Straight Lick with a Crooked Stick: Stories from the Harlem Renaissance, was issued in 2020.

Today Eatonville is the location of the Zora Neale Hurston National Museum of Fine Arts, under the umbrella of the Association to Preserve the Eatonville Community. The P.E.C. holds a legal license from the Zora Neale Hurston Trust, which is “very specific about protecting her name and her brand,” explains N.Y. Nathiri, P.E.C.’s Executive Director. Informally known as The Hurston, the institution showcases the work of artists of African ancestry not only from the U.S. but throughout the African Diaspora, in rotating exhibits.

The P.E.C. also presents the Zora Neale Hurston Festival of the Arts and Humanities, aka ZORA! Festival, a nearly month-long commemoration held each January since 1990, “always starting on the 7th, which is [Hurston’s] birthdate,” Nathiri says. The multi-disciplinary event featuring exhibitions, theater, and arts education programming, culminates on the last weekend of the month with a three-day Outdoor Arts Festival. It’s attended by thousands, and Nathiri emphasizes that not all of them are Black.

“You see, Zora Neale Hurston is a cultural icon. Her work is based in a Black cultural context [but] it has universal appeal,” she notes. “She’s just a fantastic storyteller [and] that’s essentially what brings people to Eatonville as a literary destination.”

She stresses, “We have to tell [her] story on a continual basis, and that story, for us, has meant a steady and consistent interest year-round, not just at festival time, but year-round in art, culture, and heritage that celebrates her hometown and her writing.” 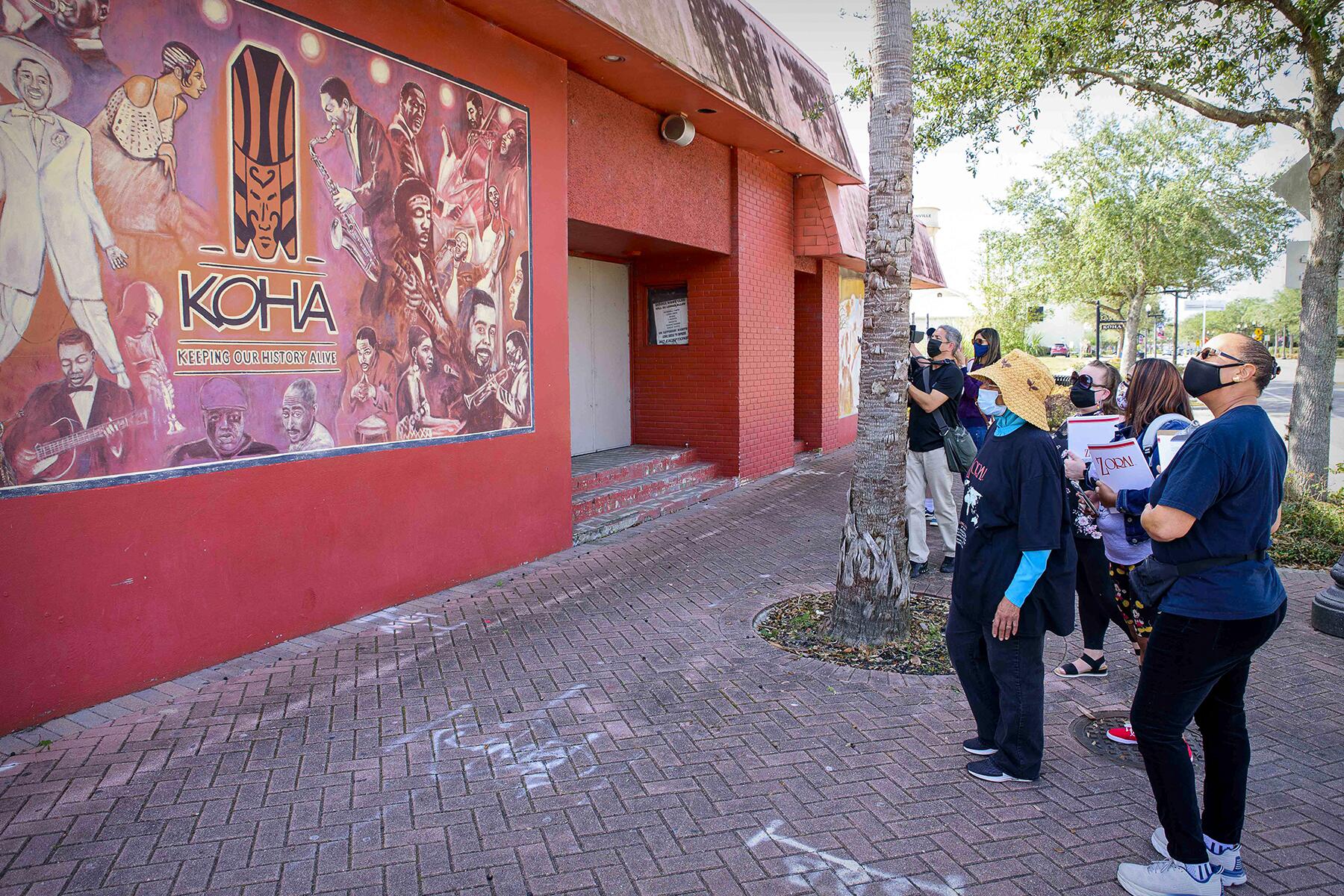 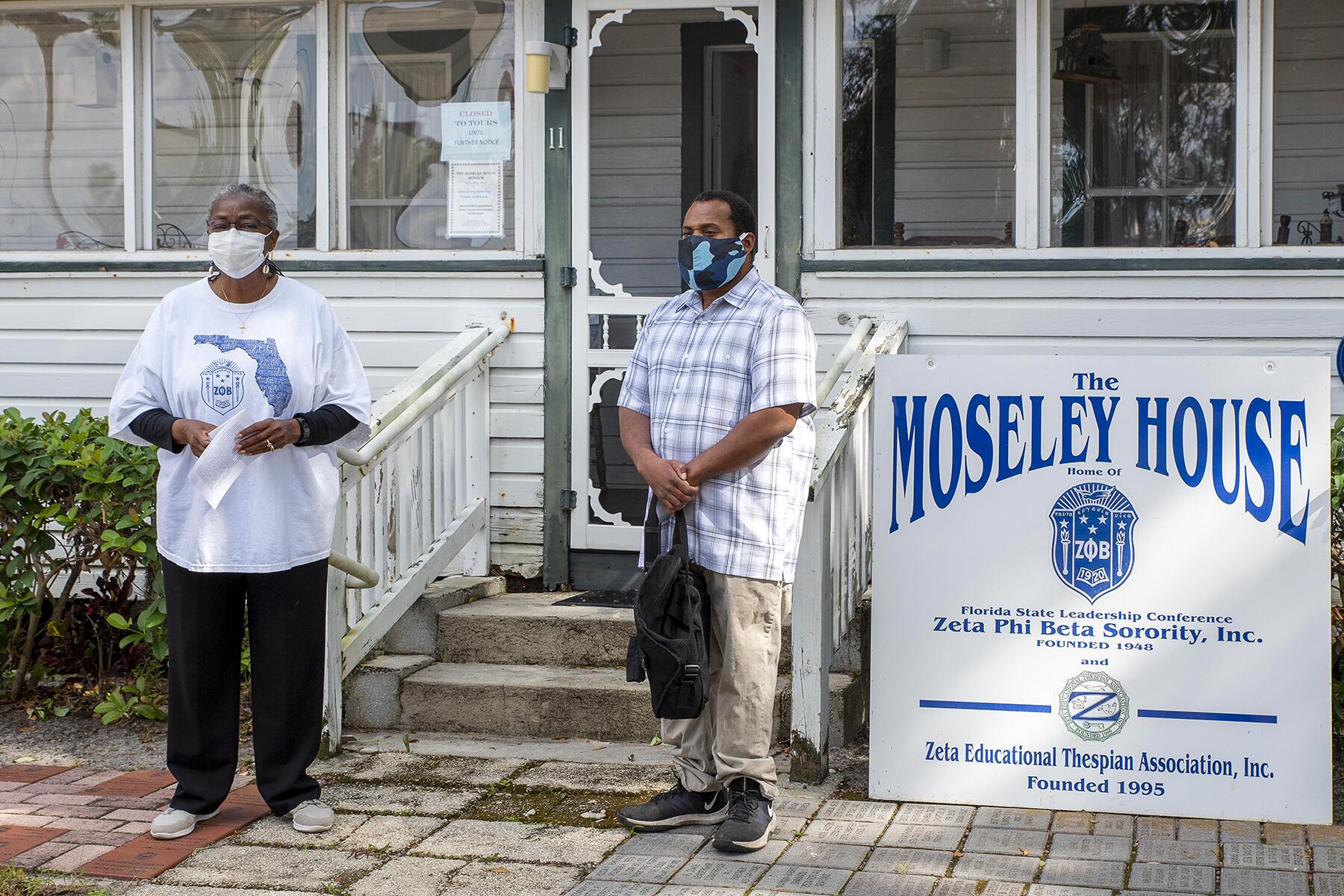 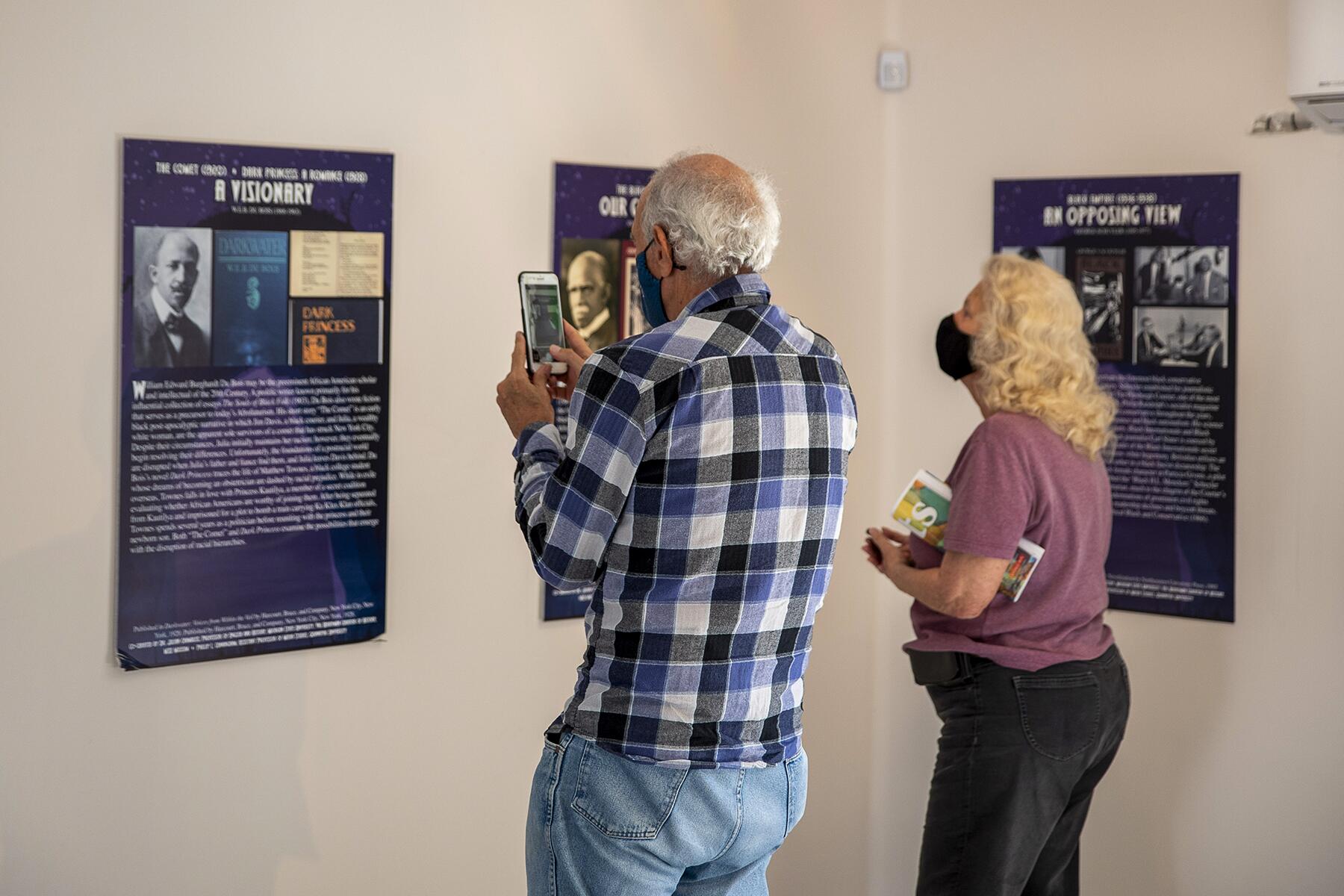 Fort Pierce holds its own yearly Zora Neale Hurston commemoration, separate from Eatonville’s, running over several days at the end of April. Part of the fun is its “Hattitudes” luncheon, a salute to Hurston’s penchant for showy hats. The city’s Zora Neale Hurston Dust Tracks Heritage Trail, taking its title from her 1942 autobiography, opened in 2004. Markers lead visitors to several settings, including the branch library named in her honor, its walls hung with paintings created by Fort Pierce native Ade Rossman. The “Zora Neal Hurston Series: Living in Africa Under the Florida Sun” vividly illustrates different seasons of her life.

The Trail site makes mention of a Zora exhibit at the Agape Senior Recreation Center, the former Welfare Home where Hurston died. The late Brenda Cooper leased the building from the county for a token amount for the older adult daytime facility, but when she discovered its history, “she became obsessed with [Hurston’s] life,” says her daughter, Marina Santos, the Education Foundation’s vice president. Cooper set up a replica of the room Hurston occupied, even adding an audio track of Hurston’s voice. 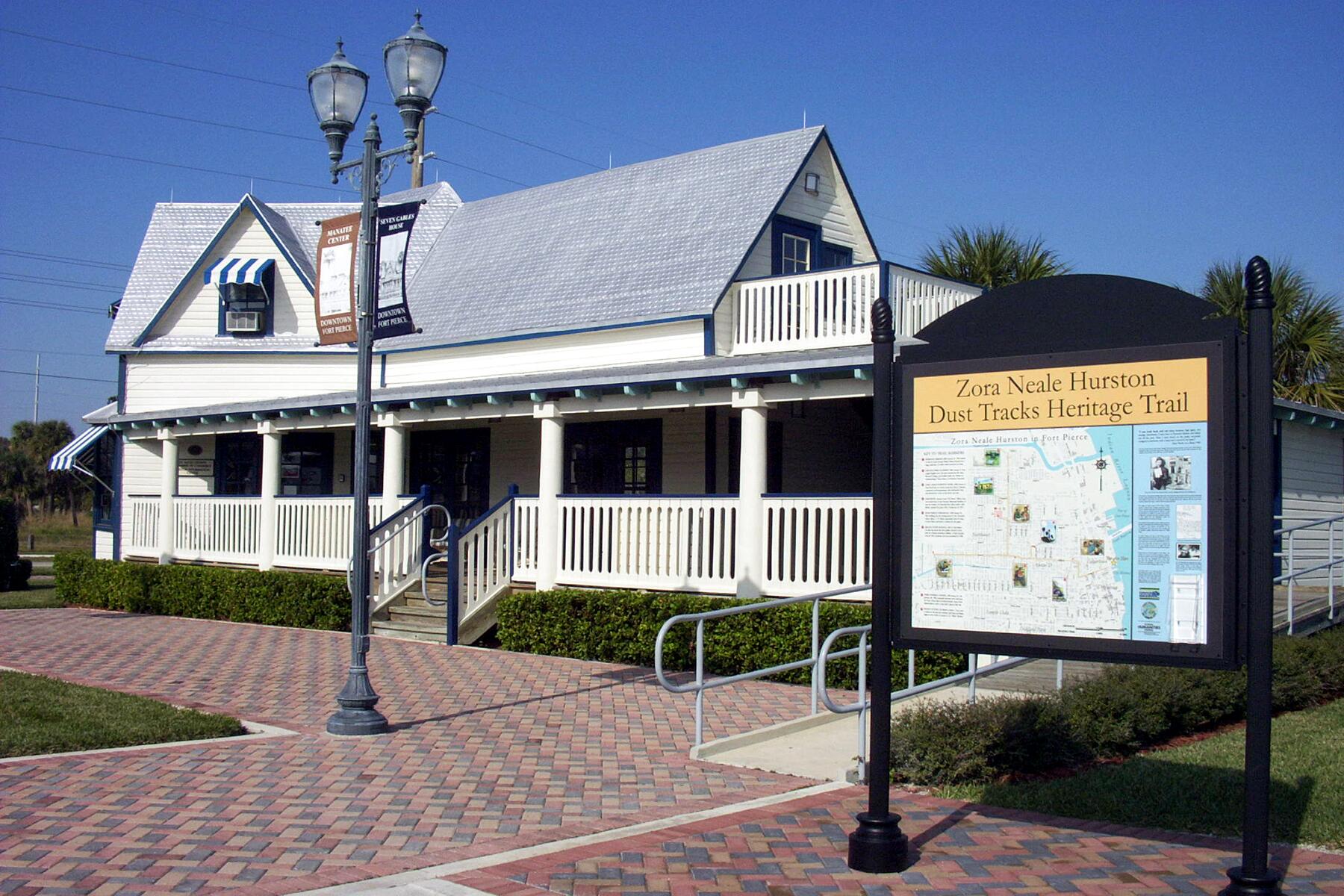 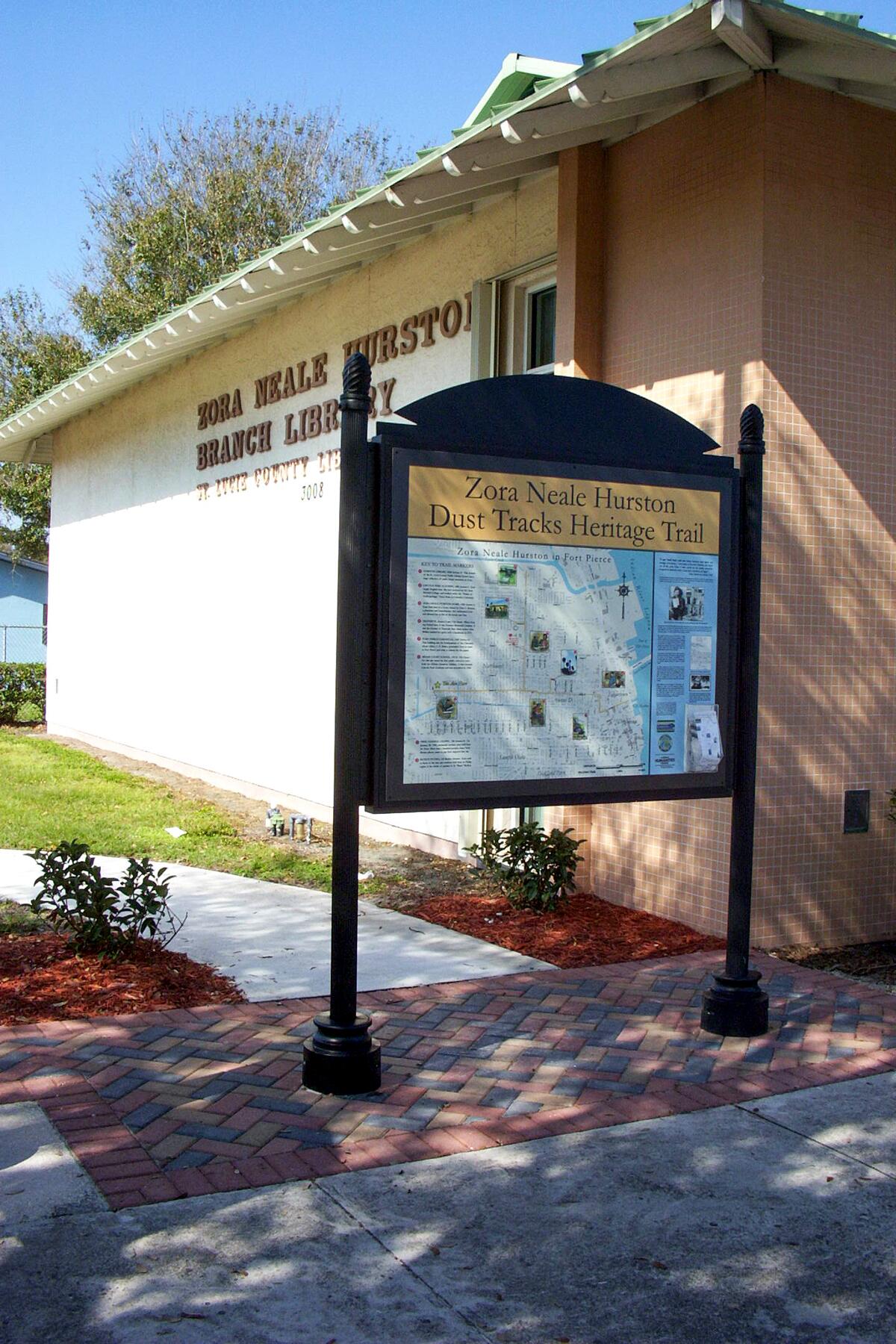 After Cooper’s death, the center closed and the building fell into disrepair, and as of this writing, is closed. The Education Foundation is fundraising to restore the structure and once again open it for public viewing. In the meantime, Santos generously offers up her number to anyone wishing for a private tour (772-332-7793).

Hurston’s papers and possessions were meant to be burned upon her death, but a friend put out the fire and rescued many manuscripts and photos. They were eventually donated to the University of Florida in Gainesville, becoming the foundation of its Zora Neale Hurston Collection.

Alice Walker did uncover Hurston’s gravesite, another stop along the Fort Pierce Trail. She had a plain headstone erected, imprinted with Hurston’s name, as well as a phrase drawn from Harlem Renaissance colleague Jean Toomer’s poem, Georgia Dusk—“A Genius of the South.”