All signs point to Dry January or Sober October moving beyond the 30-day abstinence trend—it’s the new 365-day lifestyle.

Living in Los Angeles for two decades, I’ve been to my share of drag queen performances. I love the music, the extreme makeup, the bravado, and of course, the drink specials. But, I’d never been to a show like this.

This drag queen show was at Awake in Denver, a full-time non-alcoholic (or N.A.) bar. Yes, you read that right. Not a cute tea shop or soda jerk sort of place, but a bar with actual cocktails (made without alcohol) served in fancy glassware. Without the booze-fueled frivolity, I wondered whether this sort of bar would even be fun. I walked in thinking this was going to be a pretty sober affair (literally).

The place was packed. Every seat was occupied by people in their twenties and thirties, watching drag queen Aundria Sinclair perform “Praying” by Kesha. A tear-in-your-beer ballad at a drag show? This was the first clue I was in for something different.

A server carrying a tray of cocktails that looked like a Blue Hawaii, French 75, and martini whizzed by me. Was this really an N.A. bar? Aundria, in all her blonde-bouffant regalia, worked the room as the audience clapped and whooted while slipping her dollar bills.

Booze Eva Morreale Build a Better Bar Cart: Stock up on These BIPOC-Owned Wine and Spirit Brands
Continue Reading Article After Our Video

I took a place at the bar to investigate further. I overheard the couple next to me tell the bartender they were here celebrating getting pregnant. My head snapped in the bartender’s direction to make sure I heard that correctly. A bar would be the last place I’d go to toast to conception. Megan Owen, one of Awake’s head bartenders, lit up and responded warmly, “Well, you deserve a special cocktail tonight, then!”

As I soon would learn, all drinks at Awake were completely safe and non-toxic for both mom and baby—and even kids for that matter! Awake’s glowing back bar looked like every other back bar in a craft cocktail hotspot—dramatically-lit bottles of what appeared to be white spirits, like gin and vodka, aged spirits, like whiskey and tequila, and mixers. I scanned the 12-item drink menu, blown away by the complexity of the drinks, each with four to five ingredients. Not a Shirley Temple or virgin daiquiri in sight.

Manhattans are my go-to drink at a bar, so I decided to put this N.A. drink concept to the ultimate test. Since Manhattans are all liquor (whiskey, bitters, and sweet vermouth), how could you possibly replicate the taste without alcohol? I sheepishly asked Megan for a booze-less Manhattan, figuring she’d turn me down flat or make it begrudgingly, all the while giving me the side-eye for ordering such a boozy-laced cocktail in a sober bar.

Instead, she got excited. “We make a mean Manhattan!” After a few minutes of measuring out the liquids in jiggers, pouring them into a shaker, stirring, and straining them into a martini glass, she slid over the drink that looked and smelled just like the real thing. Gingerly, I took a sip, expecting it to taste like syrupy trash. Even though the bar was hopping with drink requests flying at her, Megan didn’t budge, watching my reaction carefully.

The brown cold liquid was smooth, slightly sweet, and bitter—just the way I like them. I smiled. “Pretty amazing what we can pull off here, right?” beamed Megan. Before she rushed away, I asked to see the bottles that she made my drink with. I needed a closer look at the sleight-of-hand that just transpired.

Placed in front of me were four bottles: The Pathfinder (a fermented and distilled hemp-based liquid), Free Spirits The Spirit of Bourbon, Lyre’s Aperitif Rossi, and a nondescript, apothecary-style bottle of bitters. None of these contained any more alcohol than 0.5% ABV or less—the federal government’s legal non-alcoholic standard. For perspective, a ripe banana has roughly 0.7% ABV. What really caught my eye were the nutritional labels on the back, including ingredient lists and calorie counts. The U.S. Food and Drug Administration doesn’t require any alcohol to be that transparent, be it wine, beer, or spirits. Scanning each bottle’s labels, I did a quick calculation in my head. Awake’s Manhattan had roughly 40 calories compared to my regular one of 187 calories—I’d raise a glass to that, no doubt.

During a break in the show, I wandered over to a group of friends in their early twenties who were ordering up a third round of drinks to ask why they chose to have a night out at Awake. “I’m a professional weightlifter; I’ve got big goals and alcohol derails my training,” said one. Another said he wasn’t sober like his friend but had shifted to drinking less after heavily binge drinking during the two years of quarantine. “I love that there’s no pressure here to drink until you’re stupid like when you go out at other places…and there’s no drunk a******s to deal with!” another piped up. They laughed, clinking their glasses to their girlfriend’s honest assessment. 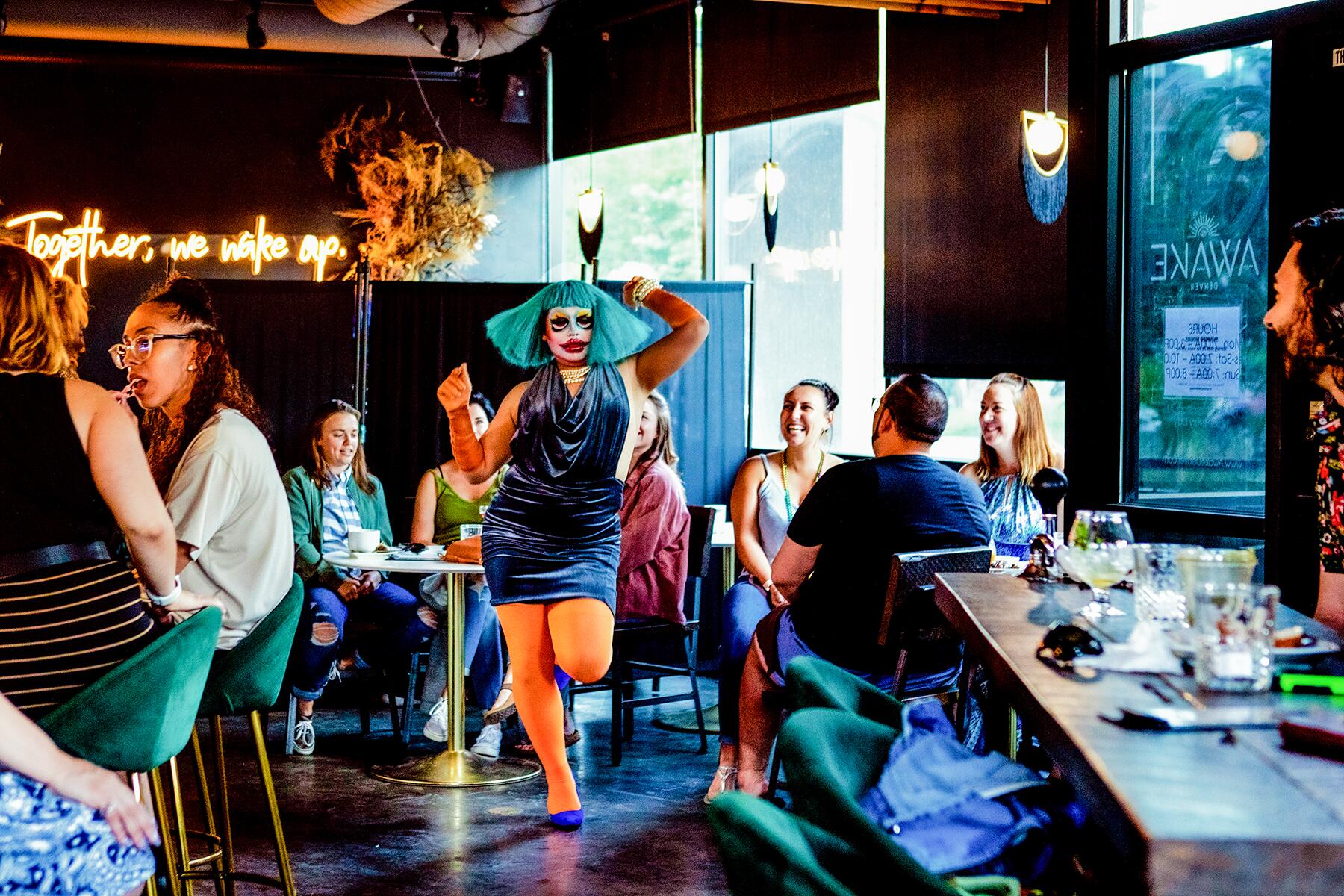 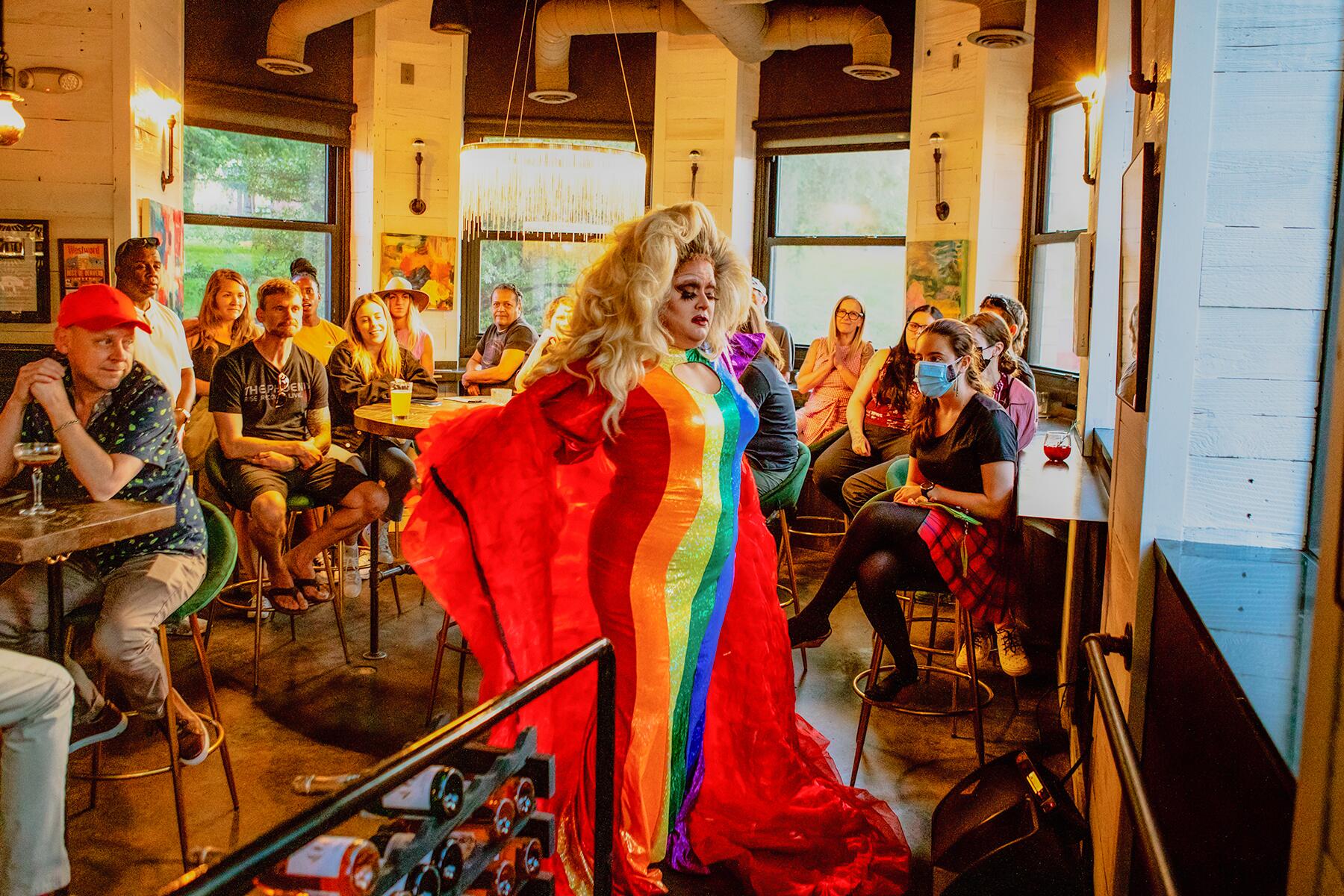 Just then, Lady Gaga’s “Poker Face” filled the air. Fashioned in pop-art clown makeup, a slinky velvet dress, pearls, orange silk gloves, and a bobbed teal wig, MsPhoria appeared. Just as she was getting her lip-syncing groove on, the sound went out. Silence. Mouth open wide mid-note, she looked around the room anxiously. The crowd did not miss a beat. Spontaneously, they belted out the rest of the song so she could finish her number.

“That would not have happened in a regular bar. I love performing for both types of bars, but the audience in sober spaces is more present like they come out specifically for us. In regular bars and nightclubs, we queens are a sideshow,” Aundria, a sober performer, explained to me later. “Plus, I love the Sangria mocktail here, it makes me feel sassy and pretty, not sloppy and ugly.”

I was really touched and honestly shocked by this act of kindness. I made a comment to another Awake bartender that it felt like this was a family reunion or a close-knit wedding where “everybody knows your name” and takes you in, just as you are.

“It is like a family here. We work hard at creating a safe space—no matter where you’re at, be it on the road to recovery or just trying to be healthier. I feel so much support here, it’s actually helped me get off drugs,” said Awake bartender Jacyln Church. That night, instead of feeling groggy and ready for bed, I felt clear-headed and energized.

Staying Sober Is a Trend That’s Here To Stay

Back in Los Angeles, I was thirsty for more N.A. experiences. Or was this just some isolated trend in Denver? Come to find out, the industry has been blowing up for a few years now. By 2025, the non-alcoholic drinks category is predicted to soar to $30 billion, according to Global Market Insights. Based on data crunching company NielsenIQ’s findings, N.A. spirits are experiencing gremlin-like expansion. In the U.S. alone, the category grew 113.4% compared to last year. Sans-alcohol beer and wine brands are exploding even more.

There’s even a dedicated non-profit organization—Adult Non-Alcoholic Beverage Association (ANBA)— to promote the movement and educate consumers. “Nearly 80% of adults that purchase non-alcoholic beverages aren’t sober at all, but moderators. A moderator is one who drinks on occasion, like they may drink only N.A. beers during the week and then have regular beers on the weekend,” says Marcos Salazar, CEO of ANBA.

To keep up with both sober and moderator demands, brick-and-mortar stores featuring N.A. beverages exclusively have opened across the country. To name a few beyond Awake’s bottle shop, there’s Boisson with five New York City locations, Houston’s Sipple, Prāzbar in Chicago, and more.

“This movement is being led by millennials and older Gen Zers. They actually see alcohol use (and abuse) as a problem their granddad had. Like it’s just not hip to drink excessively,” explained Johnstone.

Not to mention 40% of adult Americans don’t drink at all—up from 35% just a few years ago, according to a recent Gallup poll. “That’s a huge amount of people not being looked after when they go out,” Johnstone says.

So, where does one go to be “looked out for” in L.A. as a sober curious? Surprisingly, she recommended the gin-themed bar Genever for their “brilliant cocktail design using N.A. alternatives”.

Turns out, Genever—recently awarded one of the World’s Best Bars—has a robust non-alcoholic cocktail selection (look for the asterisked cocktails, they can all be made without alcohol). I went with a drinking buddy. Could I enjoy my time, without feeling deprived or envious, as she sipped a gin cocktail? I opted for the alcohol-free version of the New Bimini Place made with citrus juices, pomegranate-cherry cordial, hibiscus-flavored sparkling water, and Optimist “Fresh” non-alcoholic spirit.

At first, I was insanely curious to try her drink but kept to my N.A. drink for the sober test drive. After an hour of catching up and another round of drinks, another alcohol-free one for me, it dawned on me that I actually didn’t notice the absent liquor. Instead, I was actually buzzing on the experience versus buzzing on the booze.

How to Enjoy Non-alcoholic Cocktails Across the Country

With photography so stunning it could be an art coffee table book, this 250-recipe tome to the N.A. lifestyle takes a culinary approach to creating modern, spirit-free sips.

This Austin-based roaming non-alcoholic bar is on a 12-stop cross-country tour this summer. Their events not only feature stellar N.A. drinks but also beverage demos and tastings.

A great online shop with a highly curated N.A. selection from around the world that ships to the U.S. and Canada too.

Where to go to plug into the community as a whole. The site has a load of information, from events to bottle shops near you.

Impress friends with this monthly subscription box featuring alcohol-free ingredients to make your own buzzy-without-the-booze craft cocktails at home. Their mission is “normalizing the choice not to drink, whether that’s for a night or a lifetime.