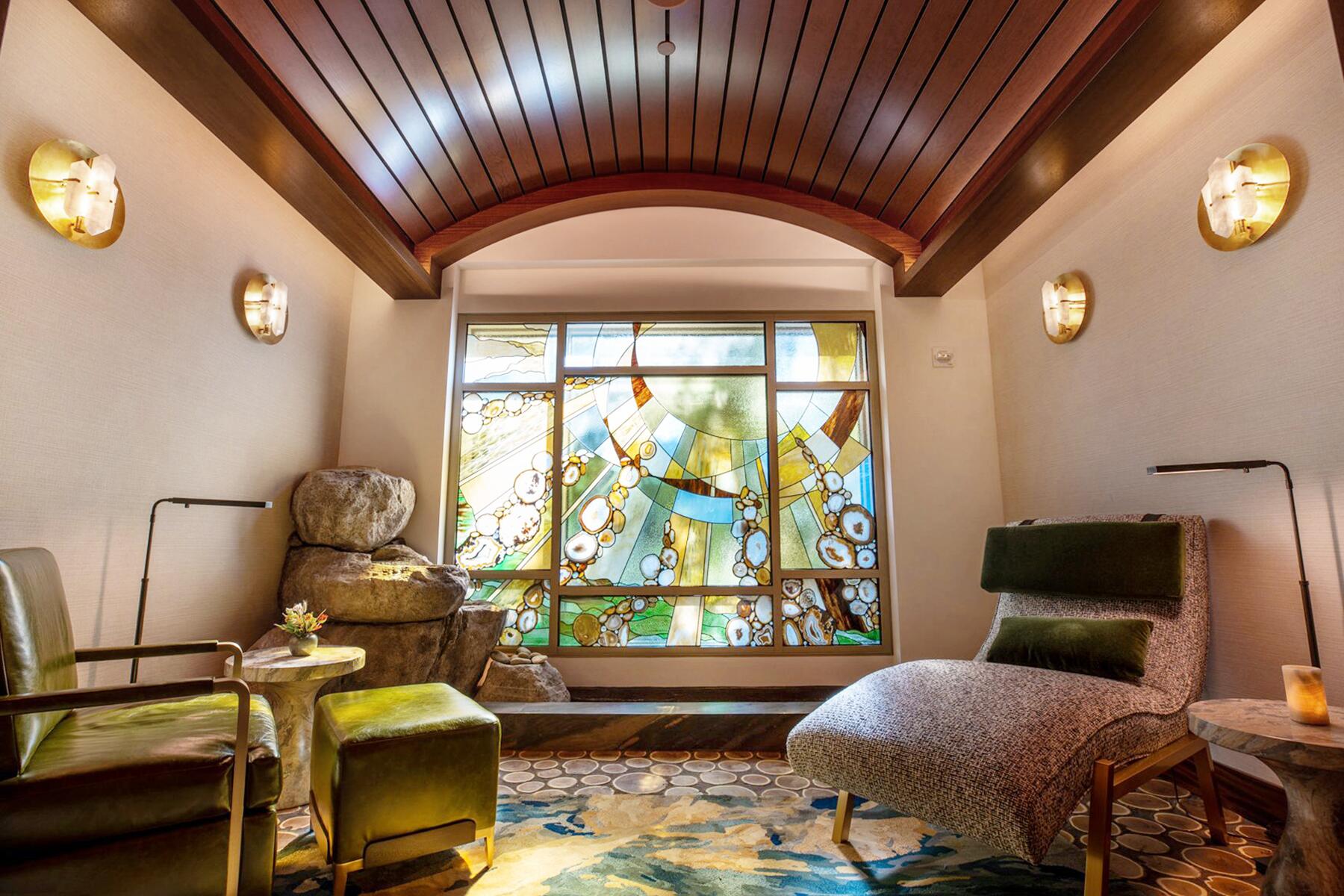 It’s as clear as the sky is blue—or pink.

I recently found myself Googling “Why do I find the moon so beautiful?” while admiring the slip of lemon peel rising into the night sky. The moon, the sun, and the stars have always fascinated humans; the sky spellbinds earthly viewers. As a species, we consistently make time to witness daybreak, dusk, and darkness. The plain-old great blue yonder absolutely stuns and mesmerizes us, and weirdly enough, that’s good for our health.

“Why? We still don’t know for sure,” says Sophie Scott, director of cognitive neuroscience at University College London to HuffPost UK, about how the sky makes us happier and healthier. “But it’s probably lots of factors–daylight is used by the brain to help set our sleep/wake cycle, being outdoors is associated with physical activity, and we did not evolve living in the kinds of buildings we now often live in.”

Though it’s not itemized on the list of treatments, the Spa Ojai at Ojai Valley Inn doesn’t rule out the healing effects of the heavens in their pursuit to provide an atmosphere of restorative serenity and health. It must be doing something right: Spa Ojai consistently wins superlative accolades and is oft-lauded as one of the world’s best spas.

Could it be something in the air?

Reach for the Sky

Settled more than 10,000 years ago by the Chumash people of the central and southern coastal regions of California, “Ojai,” pronounced “oh-hi,” comes from the Chumash word “Awahi,” meaning “moon.” Ojai, it would seem, has been under the spellbinding effects of the sky since its human inception, and those still play a role in everyday life. Ojai’s geography, nestled between the east-west running Topatopa Mountain range, supports a charming consequence: a surfeit of daily sunshine that culminates in its evenings’ magical “Pink Moment.” The long light exposure across the backdrop of the 6,000-foot Topatopa Bluffs creates a lengthy, long-reaching, and ferociously blushing sunset, casting a rose tint over the pastoral scenery. Across the Ojai Valley, spectators routinely pause their evenings to bask in the glow.

There’s a mysticism rooted in the physical presence of the Ojai Valley. Ojai, like Sedona, Arizona, has a reputation for being a spiritual “vortex,” a destination where the earth’s psychic energy culminates into humans’ higher consciousness. The pseudo-science of vortexes has long been disputed–there’s no actual magnetism or energy at vortex areas, as often claimed–but it’s easy to understand why someone might experience an emotional rush based on the vistas alone, especially when we know that exposure to nature is linked to mood-boosting benefits. Because while the spiritual energy of Ojai Valley is in dispute, the scenery is unimpeachably sublime. And though there’s no scientific basis for vortexes–hang with me here–good vibes don’t need factual validation.

And Ojai’s got good vibes. Visitors, influenced by the sights or the suggestion, get it. It only makes sense that Ojai’s preeminent spa, a place of cleansing and healing, would attempt to incorporate the metaphysical into its rehabilitative therapies. And while the powerful psychic energy of the cosmos isn’t necessarily something you can itemize on a spa menu, Spa Ojai has found a way to incorporate the power of the valley’s transcendence into its therapeutic mission—and that’s what makes for an unparalleled experience. 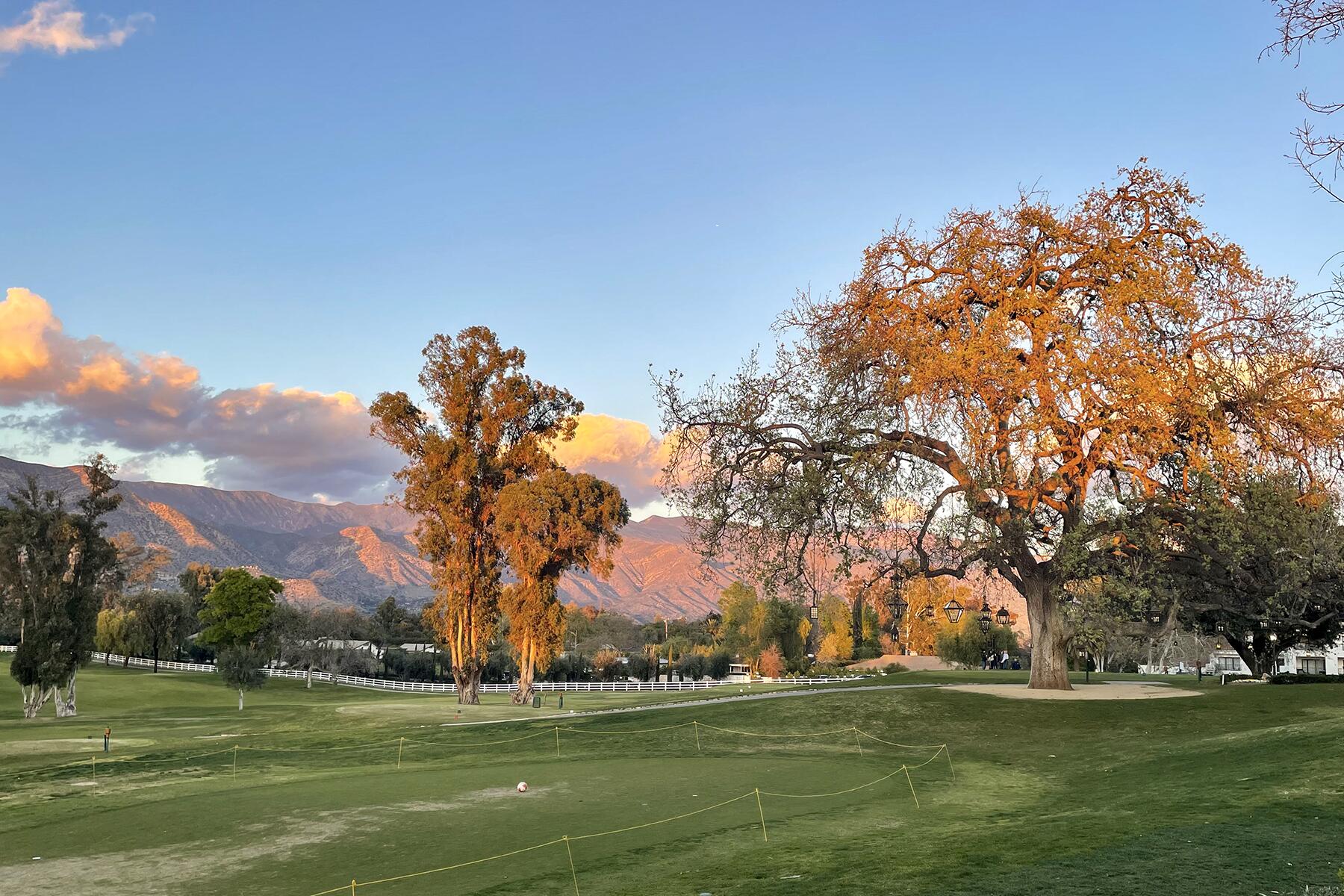 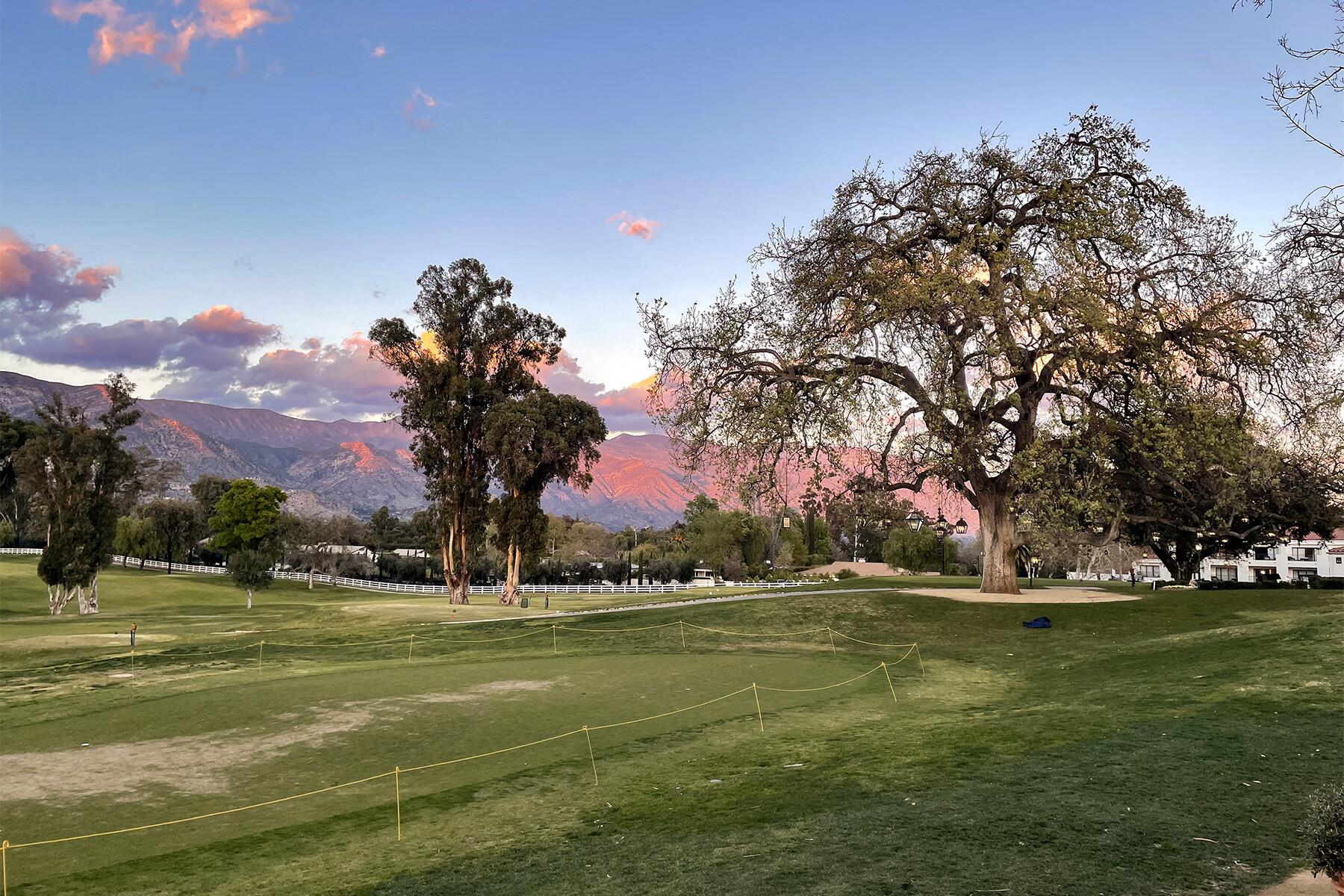 Heaven Is a Place on Earth

Spa Ojai at Ojai Valley Inn’s bucolic grounds are classic Californian and set a warm, gentle tone for respite. Fruiting lemon trees, soaring cypresses, and centuries-old oak trees wave in the golden sunlight. The scent of the lavender wafts off nearby fields. Horse whinnies drift across nearby pastures, bicyclists with picnic baskets sail past undulating fields, and post-Pink Moment, the yellow moon drifts across the inky night sky. There are so many ways to experience the joy of nature and being outside, a pleasure that is immune-boosting with mood-altering benefits, according to scientific studies. Just taking in the view might be the added wellness boost you can’t find in a bottle or a treatment.

The Inn’s spa is located inside a Spanish-style casita and courtyard oasis on the resort’s property. Stunning views and spectacular amenities set the scene for serenity, with a chic desert-palate and minimalist design throughout, as well as state-of-the-art equipment in the workout areas. A spa cafe, outdoor yoga studio, and twin pools (swim laps in the dual-lane Energy Pool, or contemplate the quiet of Tranquility Pool) enrich a visitor’s options for treatment by encouraging more than passive receipt of services. The 31,000-square-foot spa includes 28 treatment areas, hot tubs, rest/quiet rooms, and massage rooms with fireplaces available, all fantastic and top-notch luxuries. 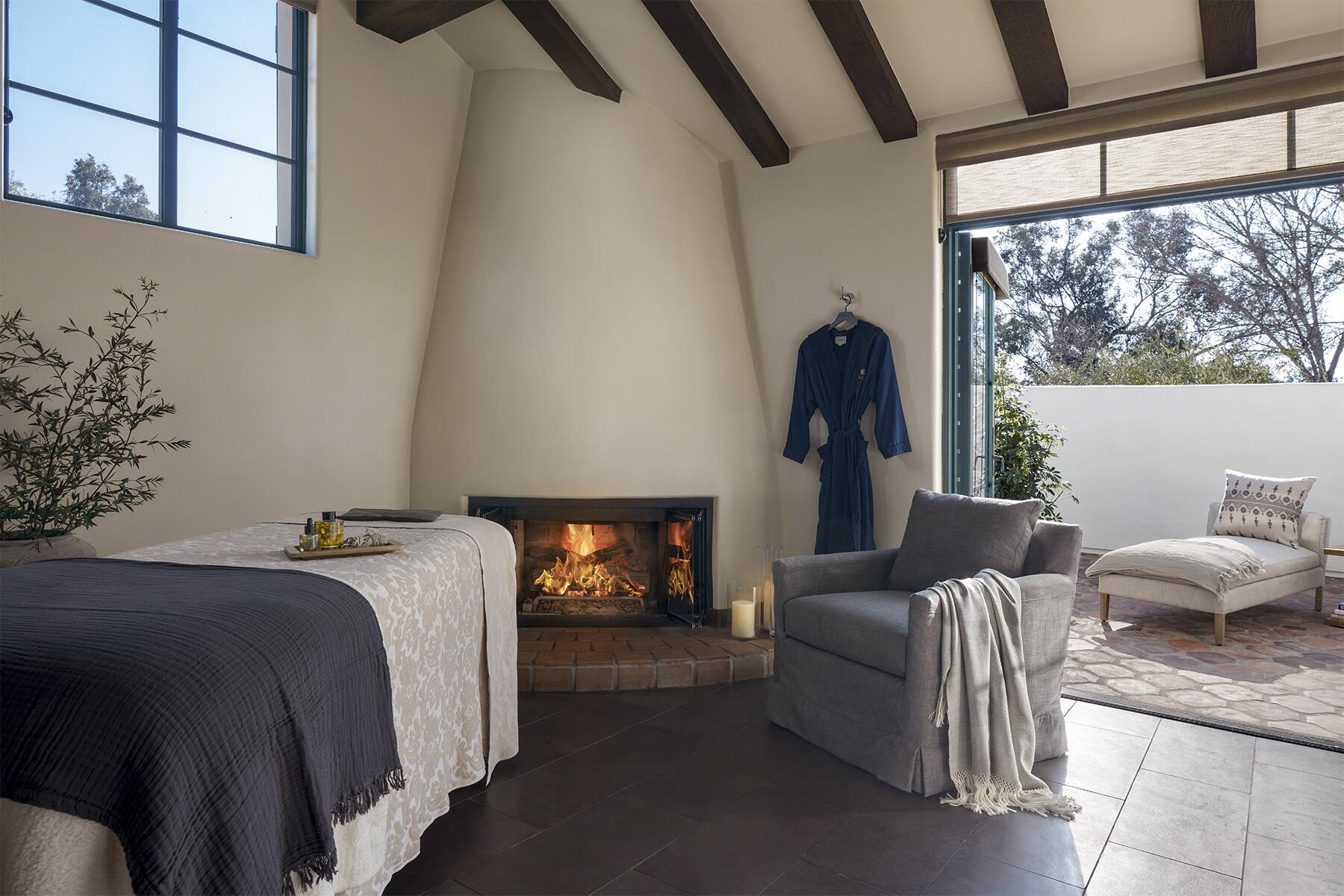 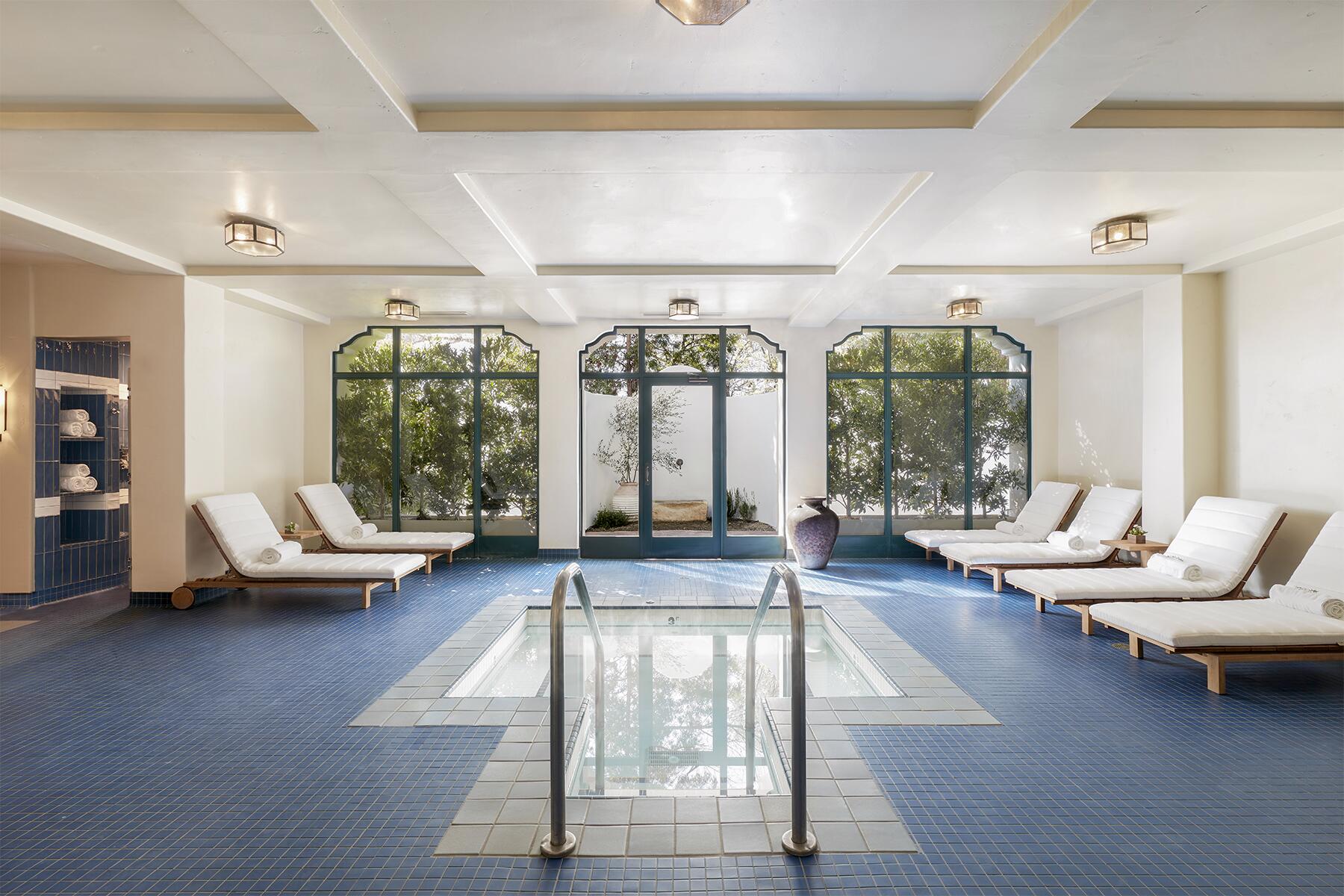 Staff and patrons both take a mindful, present approach to the communal environment, speaking in hushed tones and minimizing procedural duties. Spa-goers here are eager to reflect back the good energy they’re experiencing. You’ll see very few phones but lots of books and magazines. There appears to be a conscientious effort by those spa-ing, as modeled by the staff, to be considerate of others in the space and consider the fleeting time visitors can devote to wellness. Perhaps the most remarkable factor of this particular spa is the community’s respect for the environment and those ethereal vibes. Many spas market themselves as a sanctuary, but here there’s a real feeling of sacredness to the process and the place. There’s a quiet seriousness in the atmosphere that seems to reinforce the idea of favoring spa treatments as deeply therapeutic healing as an active pursuit rather than a passive receipt. Everyone’s putting out the good energy they are receiving.

What makes the experience more than just a corporeal, superficial self-care treatment is how the spa intends to improve its visitors’ overall, long-term wellness and being. You aren’t just going to Spa Ojai at Ojai Valley Inn for a massage. You go for a massage and a touch of transcendence. And day after day, the environs of Ojai Valley, in concert with its preeminent spa, offer visitors a bit of the same opportunity: to revel in calm and gratitude, states of mind that undoubtedly have healing effects on ourselves. Incorporating the wholeness of the self (the body, mind, and spirit) into self-care is what catapults Spa Ojai to its vaulted title.

Spa Ojai at Ojai Valley Inn understands the power of the valley’s real or imagined psychic energy, and especially of its inimitable beauty. Maybe it’s because the Pink Moment encourages a daily pause that the residents of the Ojai Valley have such a reverence for mindfulness and that good energy begets good vibes. Spa Ojai embraces the cosmic, intangible aspects of wellness, and that translates to visitors, who again and again vote it as the best in the world. You can’t buy presence, but you certainly have a better chance of finding it while watching the sky.

Wow, no travel insurance?! In all my 30+ years of travelling I have never got out long-haul without insurance. OK-ish locally in Europe but never long-haul.