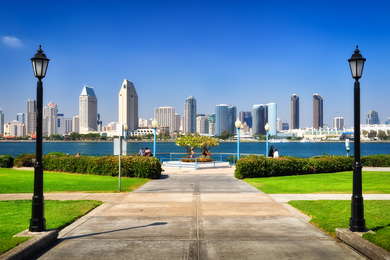 Rose-hued and luxurious, the Spanish Mediterranean-style La Valencia has been a La Jolla icon for more than 90 years. Once a hideaway for Hollywood legends like Gregory Peck and Ginger Rogers, “The Pink Lady” now caters mostly to tourists and business travelers, along with the occasional celeb. The famous building has a stucco exterior with terracotta roof tiles, a windswept tower, hand-painted murals, and grounds dotted with vibrant bougainvillea and geraniums, as well as elegant traditional decor, ocean views, and a lovely pool lined by palm trees. Just a couple of blocks from La Jolla Cove and sun-baked sandy beaches, La Valencia is ideally located in walkable seaside La Jolla, which is home to many boutiques and restaurants. In 2018, the hotel will debut Spa La V, a 3,500-square-foot spa set in a reimagined 1905 classic California bungalow.

YOU SHOULD KNOW The hotel charges a mandatory $30-per-day resort fee, which includes overnight valet parking. If you’re staying at La Valencia, though, your wallet won’t even notice.

The majority of La Valencia’s swanky guestrooms feature coastal views (70% to be exact). Sophisticated decor nods to old-school Hollywood glamour, with soft hues, classic furnishings, plush beds topped with imported linens, and sumptuous European-style bathrooms. La Valencia’s 250-square-foot “Vintage” rooms are on the cozier side but feature Eastern king beds and a coastal view option. The residentially inspired “Classic” rooms are much more spacious -- 400 to 850-square-feet -- and include junior suites. And the “Villa” rooms have a fireplace, a private patio or balcony, a seating area with a wet bar, and a soaking tub.

La Valencia allows up to two pets under 40 lbs for an additional fee.

European-inspired, marble-clad bathrooms vary by room style, but all feature luxurious touches, including toiletries from Gilchrist & Soames. The hotel’s Vintage rooms feature standing showers with dual shower heads; Classic rooms include a bathtub-shower combo and a large vanity. Villa rooms have extra-spacious bathrooms with a separate shower and soaking tub.

The hotel will be opening Spa La V, a 3,500-square-foot spa set in a reimagined 1905 classic California bungalow, sometime in 2018.

Locals were crushed when The Pink Lady decided to close its famous Whaling Bar and replace it with Cafe La Rue. They got over it, though, and are now among the regulars at the European brasserie, known for casual, seasonal fare and artisanal cocktails.

From the hotel, it’s a 5-minute drive to Interstate 5 (known to locals as “The 5”), the main north-south freeway in San Diego. Traffic usually moves along at a good clip but can get really backed up during rush hour. Southbound I-5 goes to the Downtown core while northbound follows the coast. Other highways and roads connect east and west. If you get on Torrey Pines Road, it continues on to UCSD toward the Torrey Pines Natural State Reserve and Del Mar. The road becomes Camino del Mar and after Del Mar turns into Pacific Coast Highway 101.

Charming La Jolla by the Sea has a lot of dining options, and many of the best are steps from the hotel. Brockton Villa Restaurant (5-minute walk), located in a historic beach bungalow with views, is a beloved brunch spot in La Jolla. George’s at the Cove (5-minute walk) is a contemporary classic known for its incredible views, three levels of dining, and elegant seafood-centric cuisine. For devoted carnivores, Donovan's Steak and Chop House (5-minute walk) has crisp white tablecloths and succulent cuts of meat.

La Jolla doesn’t have much of a nightlife scene, but there are a few worthy options. Locals and tourists alike hang out at The Spot (5-minute walk), a casual tavern with a fireplace that serves pub grub and drinks. It opened in 1915, making it the longest continuously running restaurant in La Jolla. It’s a solid option for a happy hour drink or a late-night bite. The elegant oceanfront Nine-Ten Restaurant and Bar (5-minute walk) at the Grande Colonial hotel has an elegant marble-topped bar and a happy hour from 3:30 to 6:30 pm that’s been known to attract local movers and shakers.

You may not be a screen siren, but you’ll feel like a star at La Valencia, a La Jolla icon with a fascinating past. The stunning rose-hued Pink Lady has luxurious rooms, a pool with ocean views, and a soon-to-open spa. It’s also set in scenic, walkable seaside La Jolla, where you’ll find upscale boutiques and fine dining.

#9 The 10 Most Romantic Hotels in San Diego