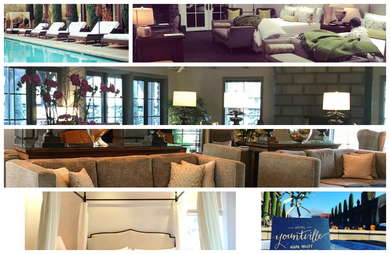 The landscaped woodsy setting, resortlike pool area, glorious spa, and the exclusive yet casual ambiance of the Hotel Yountville attract travelers wanting to get away from it all yet still be close—but not too close—to fine dining and tasting rooms.

The hotel's 14 stone-clad buildings shelter chic rooms and suites painted in shades of beige and brown with the occasional orange or other bright accents. All rooms have stone fireplaces and four-poster beds decked out in Italian linens. Double King rooms and all suites have vaulted ceilings and outside sitting areas. Standard King rooms lack these but are spacious. For a splurge, book the Yountville Suite, a 1,100-square-foot vaulted-ceiling extravaganza so big you might get lost during the first few hours.

Returning guests who have sampled multiple rooms tend to choose ones in the back of the property near Hopper Creek because they're quieter and feel more secluded. 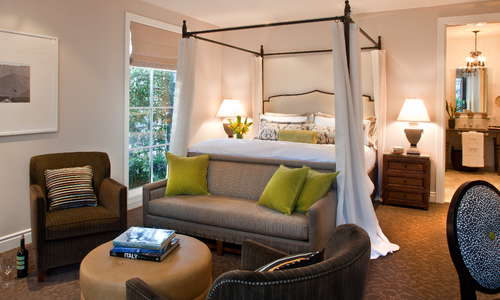 Bathrooms, many with travertine tile floors and wide double vanities, have soft lighting and white ceramic tile. Premium King rooms and all suites have two-person soaking tubs and separate rain or steam showers. Guests in Standard King rooms choose between a walk-in shower or a combination tub and shower. Rooms in the Deluxe category (either a king or two queens) have large soaking tubs outfitted with a shower. London-based Molton Brown supplies the bath products.

The lobby here is more like a foyer, with the front desk in a separate area to the left and the bar taking up most of the space to the right. It's nicely appointed, it's not a place to hang out, though the loungelike bar definitely is.

Flanked by tall cypress trees and glowing a rich aqua blue on sunny days, the rectangular pool is long enough for swimming laps. A long, narrow fire pit blazing away at the foot of also grabs attention. Lounges with thick cushions covered in soft terry cloth monogrammed "HY" are positioned around the pool, and with the stone-clad café and spa buildings framing the scene, it makes for a ritzy tableau. On summer weekends when the bar area is hopping, it can seem like you've dropped by a pool party. 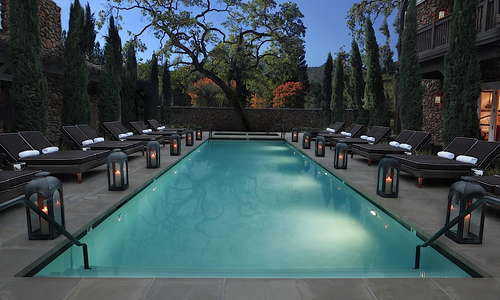 Given the hotel's extensive stonework, it shouldn't surprise that the signature massage at the on-site Spa Acqua involves heated stones, or that the striking floor is made of smooth stones and pebbles. Swedish and deep-tissue massages are also offered, along with body therapies, and facial and other skin-care regimens. Two of the six treatment rooms can accommodate couples—both rooms have Vichy showers and double hydrotherapy tubs—though couples staying in suites often opt for a romantic in-room treatment. That session begins with a massage, followed by an interlude of Champagne sipping prior to a lavender-tea bath.

A fitness center on the Hopper Creek side of the property is scheduled to open by early summer 2018. Two large barn doors at the back of the building will open up to views of Hopper Creek.

Natural light floods the cheery Hopper Creek Kitchen, which serves breakfast and lunch. In addition to the usual morning suspects, there's a breakfast risotto with local fruit, bergamot mint, and Tahitian vanilla. Eggs Benedict here comes with crispy pork belly. Lunch fare includes chicken club and roast beef sandwiches, along with fish, chicken, and steak frites entrées. In good weather, you can dine on a patio adjacent to the pool.

The hotel's main Y Bar sits just to the right of the entrance, the subdued grays of the lounge's ceilings, walls, and back-to-back rectangular sofas setting a genteel tone that's occasionally upended if there's a close sports game playing on the flat-screen TV suspended over the bar. French doors open out to a concrete-floored patio with enormous central water feature and a tall stone fireplace. Two popular drinks to have indoors or out are a margarita made of Don Julio Silver Tequila, lime juice, Cointreau, and Grand Marnier, and Summertime, a dangerously quaffable blend of Hangar 1 Vodka, lime and pink grapefruit juice, thyme, and ginger syrup.

Yountville lies east of Highway 29 about 9 miles north of the town of Napa. The hotel is at downtown's southern end, but the northern end is less than a mile away. Most guests drive here but walk to the shops, restaurants, and tasting rooms along Washington Street, only getting into their cars to visit wineries beyond the town center. You can also hop aboard VINE Bus 10, which stops along Washington, or catch the motorized Yountville Trolley, which circles through town and up to Domaine Chandon winery. The hotel also provides complimentary bicycles.

The bartenders at Redd (3-minute walk) and Bouchon Bistro (9-minute walk) craft the classics and specialty cocktails that change with the season. Their counterparts at Lucy Restaurant & Bar (9-minute walk), at the Hotel Yountville's sister property, Bardessono, use ingredients from the chef's garden in signature "I Love Lucy" cocktails like the Lucy Goes to Scotland, with Speyburn Scotch, Tuaca, orange bitters, and St. George Absinthe. A longtime favorite at Bottega (9-minute walk) is the Bear Flag Revolt: Ketel One Vodka, fresh lime juice, Calabrian chili, and muddled basil, with a pomegranate ice cube.

In the middle of Yountville on sometimes forgets that this was (and still is) a farming town, but the hotel's layout and creekside setting retain a sense of the pastoral. The service and amenities combine the best elements of a big-city hotel and a resort, satisfying nearly every whim of the well-heeled traveler. 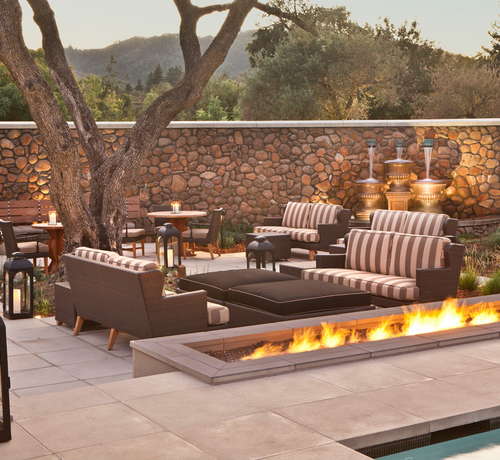 Thank you for your interest!
Look out for our newsletters with travel tips and special offers.
1/3 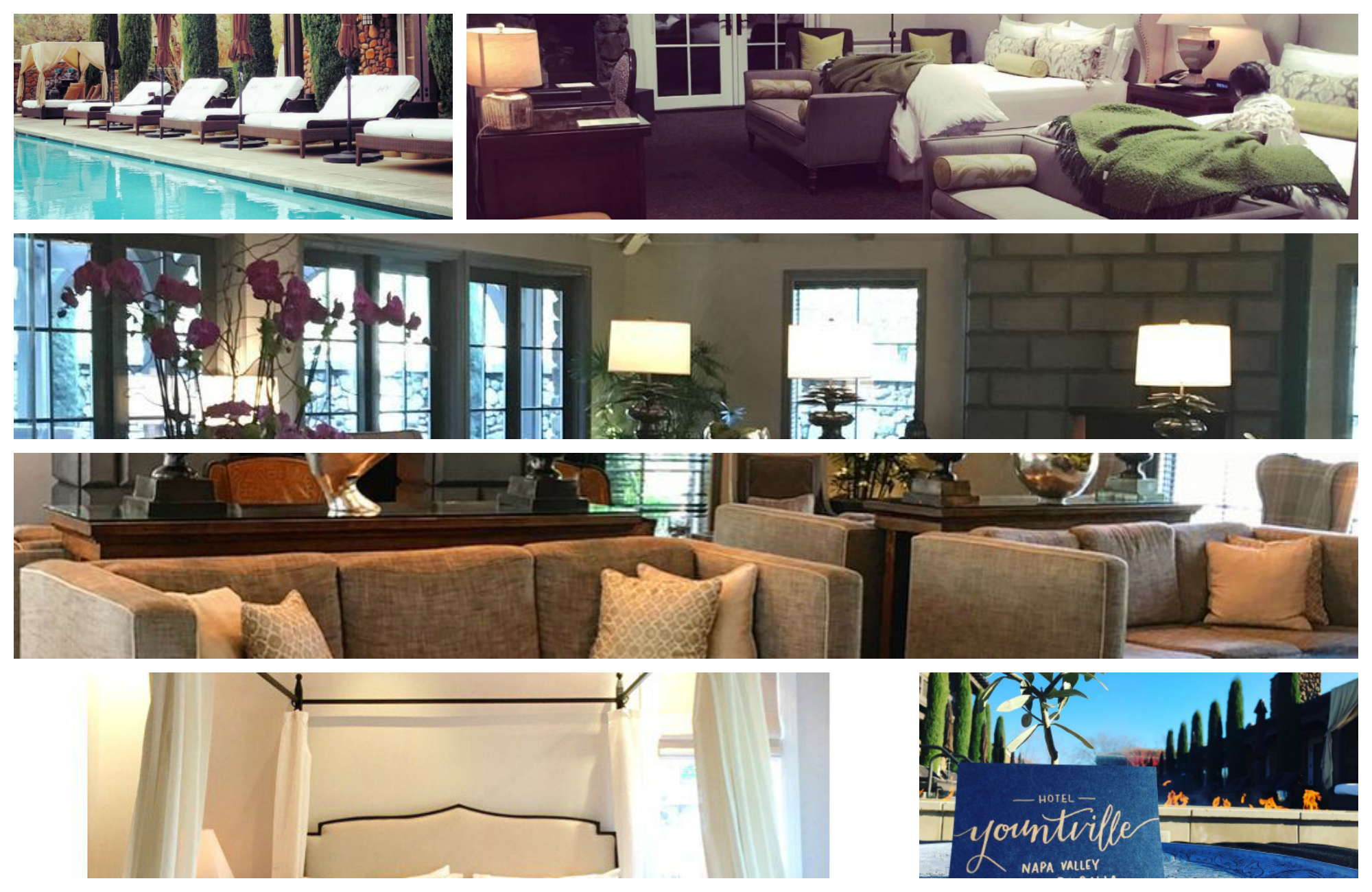 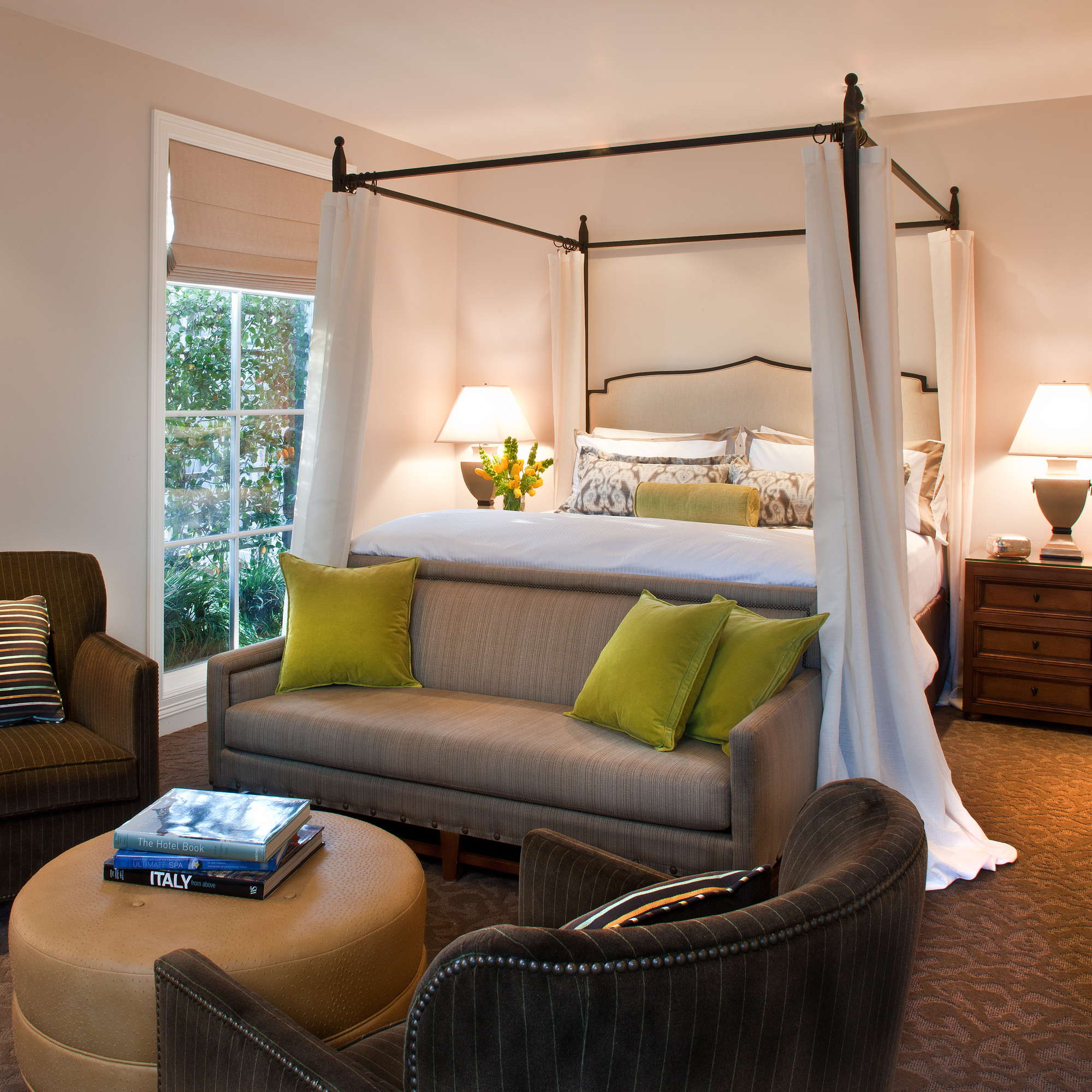 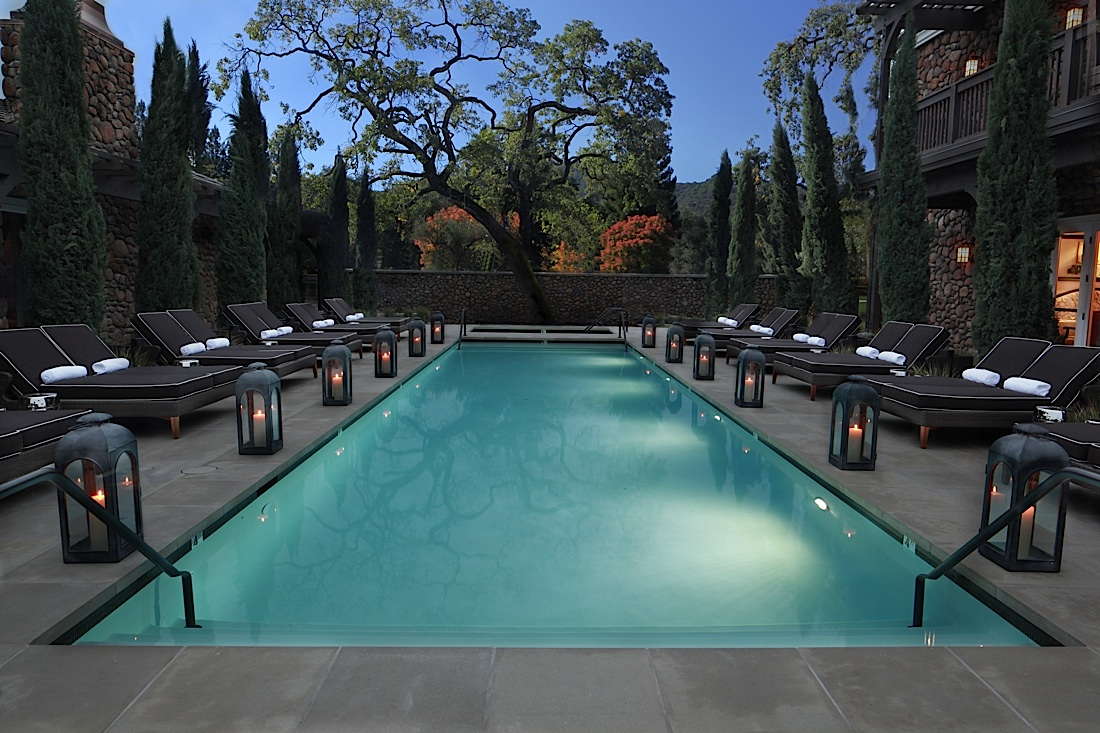