Whether you’re on the West Coast or East, you can support these fascinating migrators.

n a late January day, hundreds of orange and black wings flapped gently above our heads or zipped after each other, while others basked in the sun on nearby trees. My daughter, Sam, and I felt like we’d stumbled into some supernatural, dreamlike setting, but we’d merely realigned our paths to intersect with one of nature’s yearly wonders: the migration of the western monarch butterfly to the California Coast where they overwinter in tree groves.

Ever since I heard about this astonishing journey by a creature that weighs less than one gram, I wanted to witness it. It seemed impossible that such a delicate being could traverse several thousand miles on such tiny wings. (They ride on air currents and thermals to speed their travels and can travel 200 miles a day, from as far as Canada.) Turns out that the monarch population is divided by the Rocky Mountain Range into the eastern (east of the range) and western monarchs. Each year, the eastern monarchs migrate to overwinter in the Monarch Butterfly Biosphere Reserve, a UNESCO Heritage site in the mountain forests of central Mexico, while the majority of western monarchs head to California’s coast. Given the pandemic and international travel restrictions at the time, Sam and I opted for the highly accessible monarch groves along the Highway 1 corridor. In San Luis Obispo County alone, the butterflies overwinter at 10 different sites, most of which are open to the public.

From a human perspective, the Pismo State Beach Butterfly Grove—a cluster of eucalyptus trees and a few native pines not far from the beach and a campground full of tents and RVs—is nothing special. But 20,000-plus monarchs made it their winter home, according to a November count conducted by citizen-scientist volunteers trained by the Xerces Society, an advocacy group for butterflies and other invertebrates. Scientists don’t entirely understand why monarchs choose certain spots, although they seem to prefer the microclimate and protection of damp coastal areas where eucalyptus and native pines grow. 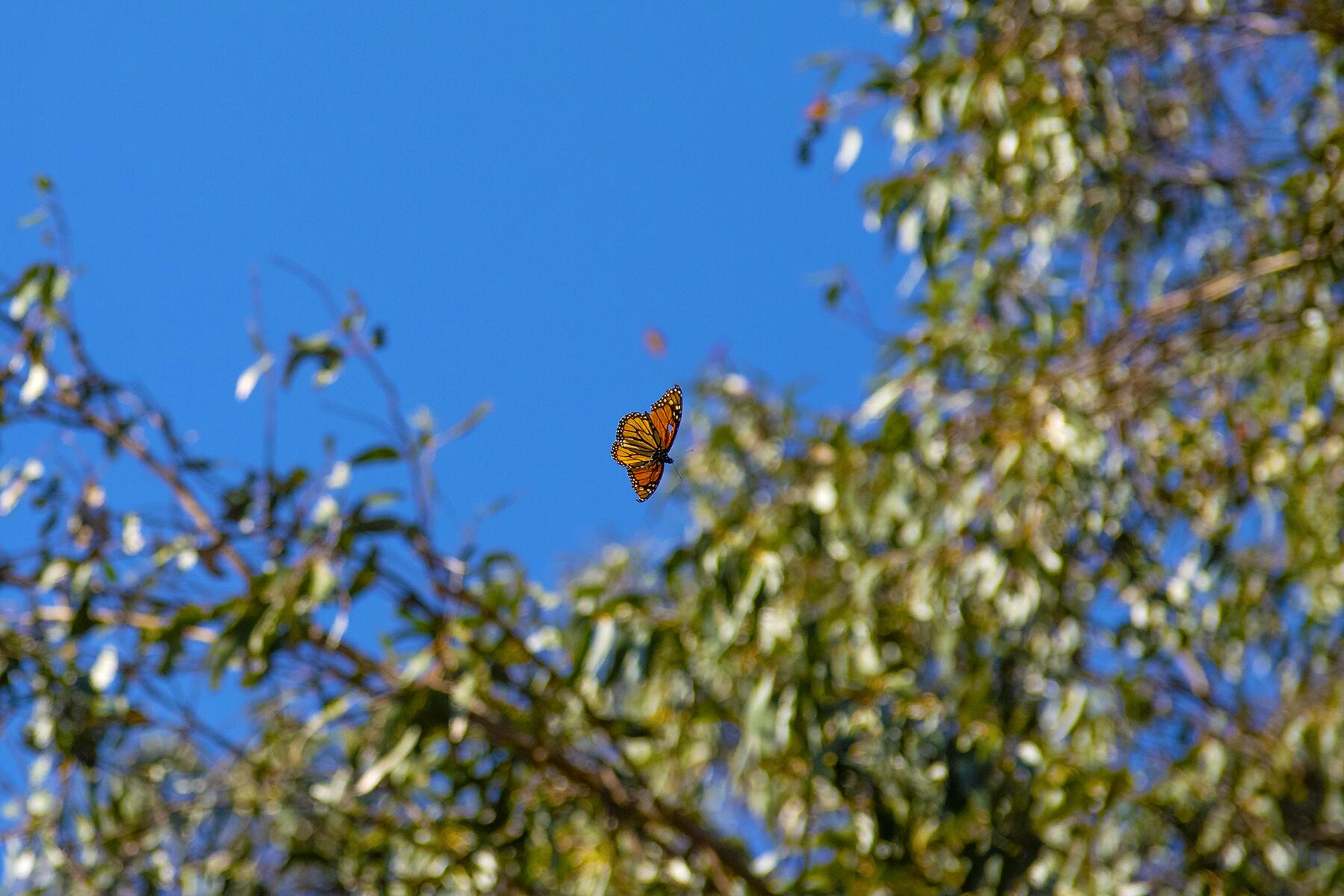 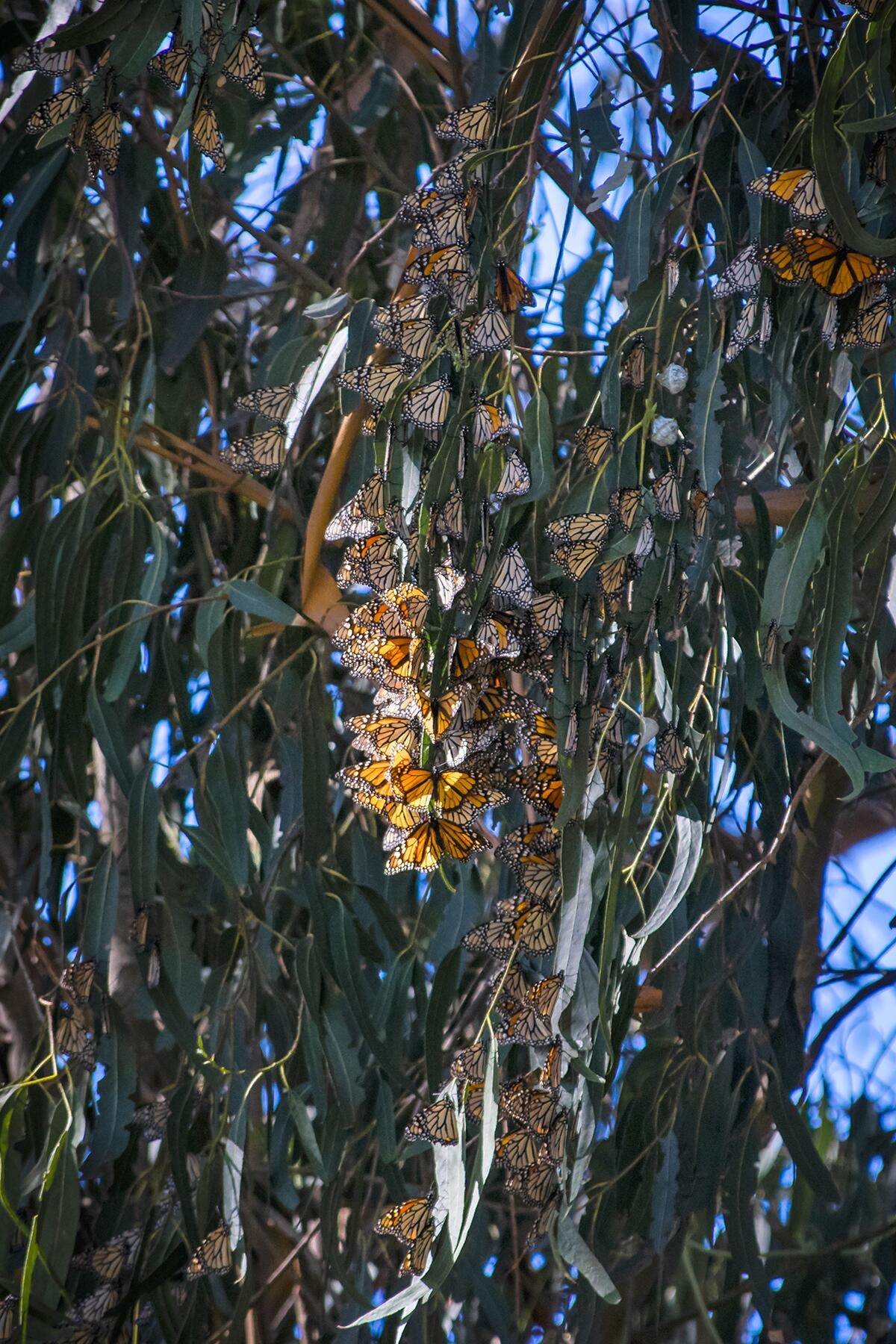 On that cool January morning, Sam and I arrived at the sanctuary by 8:30 a.m. and immediately spotted orange fluttering here and there. When the temperature is below 55 degrees, overwintering monarchs hang together in unremarkable, brownish clusters you might think are just leaves if you don’t know what to look for. (The volunteers and many visitors use binoculars.) These close formations nearly disguise the butterflies, conserve their body warmth, and shelter them from winds.

Like pilgrims of all ages journeying to a sacred place, we and our fellow monarch admirers hoped to witness this uplifting phenomenon. Following one monarch or another, our eyes danced across the scene, and our faces lit up with delight. We exclaimed joyfully when clusters of sun-kissed wings warmed in synchroneity to release into a “sunburst” of flying monarchs. Abundant monarchs are also aptly referred to as a “kaleidoscope of monarchs.” Enraptured, Sam and I spent hours immersed in this magical sanctuary.

Most monarchs live only two to four weeks from early spring into the summer, which makes up the typical four generations that nectar and reproduce elsewhere in the West. The fifth generation of the year—the ones we admired that day—is called a “super generation” because they live from six to eight months and migrate to protected places, like this park. When the weather further warms in mid-February, the males will die while the mated females depart to search for milkweed plants to lay their eggs on. Egg, actually. Females lay only one egg on each milkweed plant because the larva that hatches essentially needs to eat that whole plant to grow and metamorphose into a monarch. Each monarch female can carry between 300 to 500 eggs, so they need a lot of milkweed plants.

That’s part of the problem. Milkweed populations have been declining across the country, mainly due to development and pesticide use. No milkweed, no monarchs. And monarchs aren’t the only insects whose existence depends entirely on one host plant, as such plants are known. Zebra swallowtails, sphinx moths, and many other fabulous creatures will exist only if their host plant does. 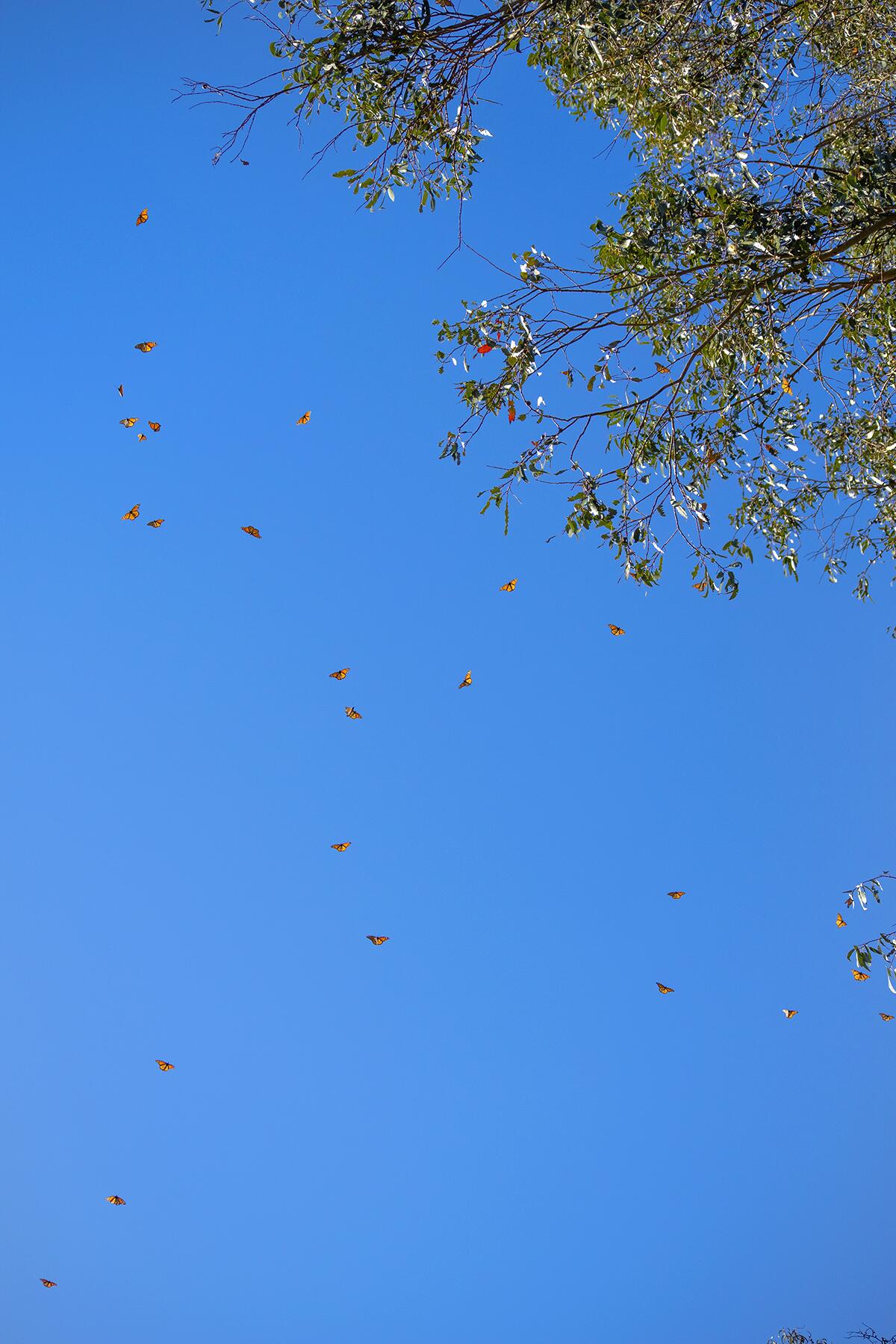 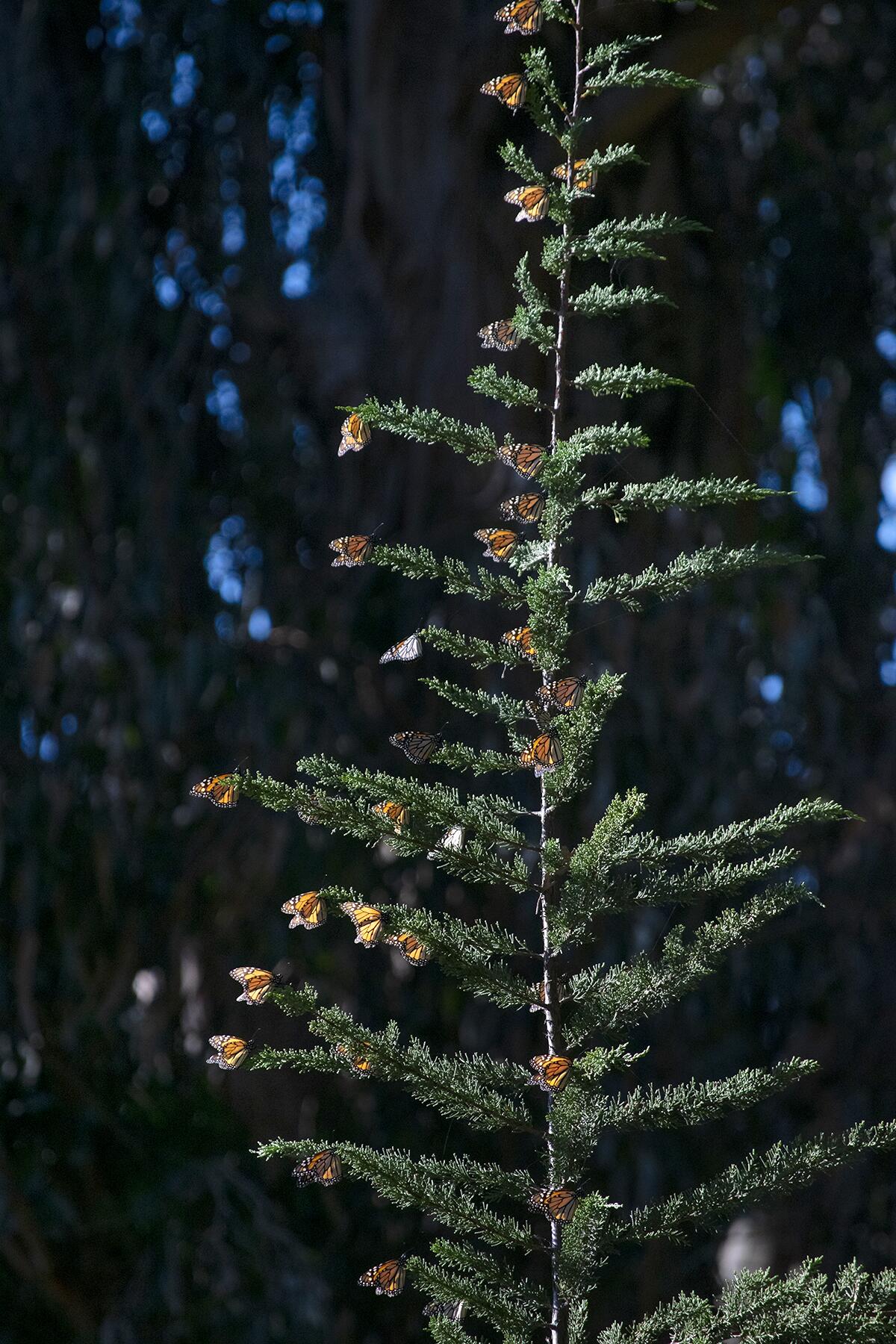 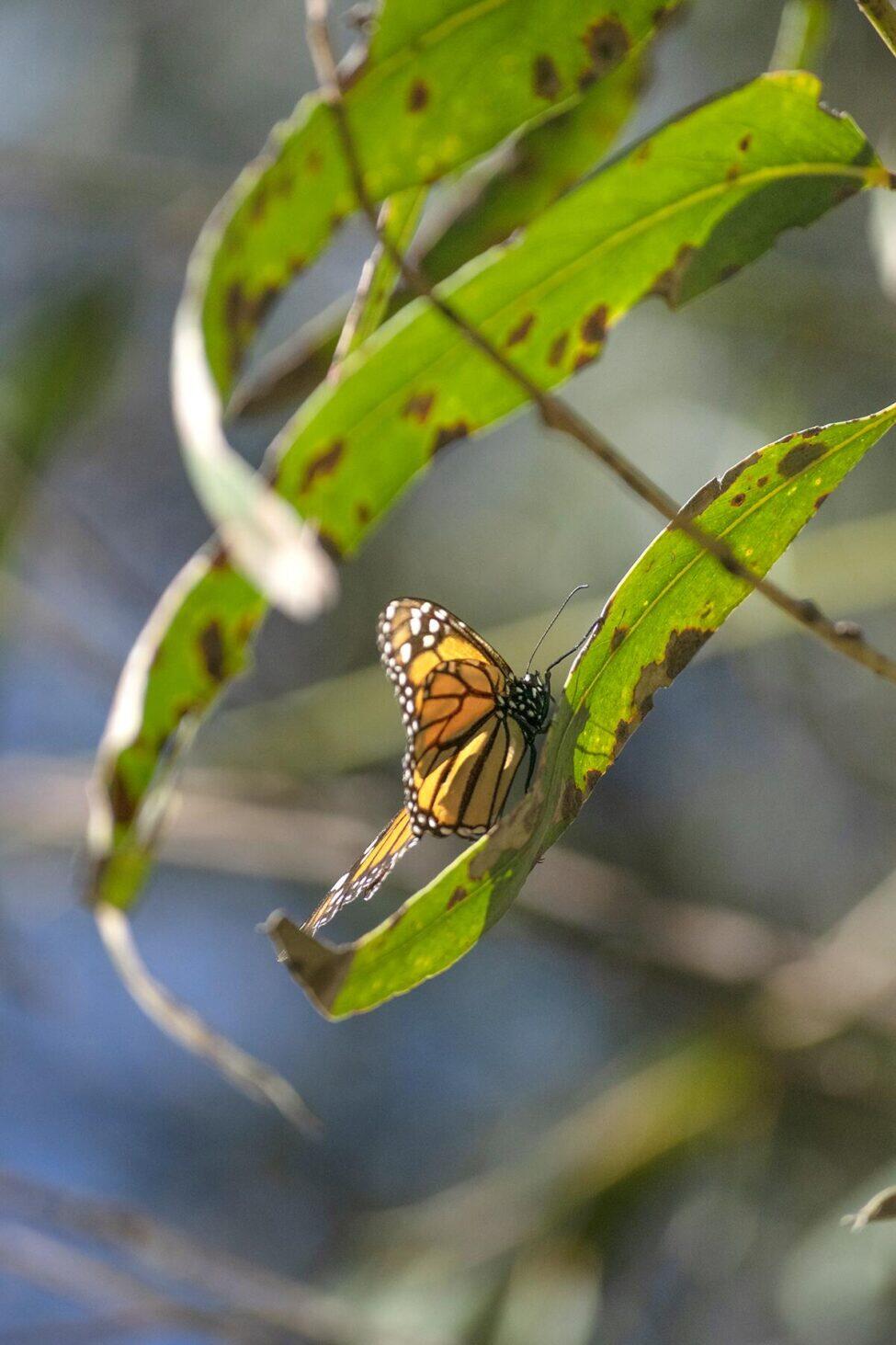 The timing of our monarch pilgrimage was fortuitous. In 2020, the volunteers counted only 2,000 overwintering monarchs across the entire West! Monarch advocates and scientists were devastated by those low numbers and feared that “maybe the migration had collapsed,” said Emma Pelton, an endangered species conservation biologist and the Western Monarch Lead for the Xerces Society.

Luckily, the western monarchs rebounded this past season—at least for now. In late 2021, volunteers tallied nearly 250,000 monarchs—the highest count since 2016—mainly on the California coast from the San Francisco Bay area to Los Angeles. Scientists aren’t sure what caused this remarkable uptick, and “this year is not recovering,” cautioned Pelton. Even with these encouraging numbers, the western monarch count is still less than 5% of what they numbered in the 1980s, which was in the millions.

“But hopefully [this count] means we still have time to protect this species,” Pelton added. We can still take action so the western monarchs won’t become extinct like the Xerces blue butterfly did when its dune habitat near San Francisco was destroyed by development.

Other factors also threaten the western monarchs. Severe storms, temperature fluctuations, fires, and habitat loss can have negative impacts on them. With climate change affecting the bloom time of many plants (earlier warm weather can mean earlier milkweed blooming), scientists are concerned that the monarchs’ reproductive patterns may not match the new milkweed bloom times. Figuring this all out is complicated because monarchs migrate in multiple generations over long distances.

While our morning in the monarch sanctuary seemed nearly miraculous to us, we were, in fact, merely witnessing one of nature’s abundant seasonal wonders. We all can find such marvels almost everywhere we look—from the raft of otters near Avila Beach that we kayaked near to the young humpback whales that hang out at the mouth of the Chesapeake Bay in winter months to the rousing chorus of spring peepers (tree frogs) who will soon sing in the trees behind my house in Virginia. In our California travels, Sam and I also were wowed by an elephant seal winter rookery, spotted sea lions lounging on rocks on our hike through Fiscalini Preserve, and kayaked near thousands of birds—from American white pelicans to bufflehead ducks—that winter in Morro Bay.

We often describe such scenes as magical or otherworldly, but such inspiring displays, I remind myself, are simply nature in all its ordinary brilliance. Something we can all help to protect.

How to Support the Monarchs

Whether you live west or east of the Rockies, “pretty much everyone can help,” says Emma Pelton, the Western Monarch Lead for the Xerces Society. Here’s how to support both groups of monarchs (and other creatures, too):

1. Plant milkweed that’s native to your area. Look up your native variety by entering your zip code in the Pollinator Partnership’s ecoregional planting guide or the Xerces Society’s milkweed finder. Milkweed can also thrive in a pot on your balcony, porch, windowsill, or other outdoor space.

3. Avoid or minimize pesticides in your yard and outdoor spaces. While some products claim to target only mosquitoes or other pests, entomologists say they pose threats to beneficial insects and pollinators.

4. Ask your congressperson to support the Monarch Act of 2021, which will provide funding to support western monarchs and their habitats.