From trail rides and rodeos to cattle roundups, Meghan Taylor does it all.

Meghan Taylor says she can’t remember a time in her life not being around horses. Her grandfather raised Quarter Horses all over Montecito while her mom grew up riding in the Santa Barbara backcountry. She was gifted her first pony before turning two and competed on the California High School Rodeo circuit.

Some might call it destiny then that the now 28-year-old would become the youngest head wrangler ever at The Alisal, a historic guest ranch in Central California Wine Country, where she oversees a herd of 110 horses. The second woman to hold the position, it’s a dream come true for Taylor, who first took a chance summer job there in 2013.

“The family horse gene came through strong with me, and I just came out hungry to ride,” says Taylor, adding it was her aunt Nancy and cousin Karen, both hands-on and accomplished horsewomen, who ultimately inspired her decision to pursue a career working with horses. “Aunt Nancy has kept me on great horses from day one. When I was nine, she gave me Sonny, my first real horse, and Karen gave me every lesson under the sun. They were tough on me as a kid, but I needed it. I look up to them both.”

Despite growing up a block from Miramar Beach in Santa Barbara, summers were spent attending “every horse camp she could find.” After a family member gifted her boarding, Taylor’s mom drove her south on weekends to ride Sonny at a barn in neighboring Ventura County. “After my mom saw how happy I was, she just said, ‘I don’t know how we’re going to do it, but we’re going to make this work.’ And that was that.”

Quiet and introverted as a kid, Taylor came out of her shell around horses, growing the most through rodeo. It’s also where she made her closest friends. After a crash course in team roping halfway through high school, she partnered up for her junior and senior year, competing at events like the Santa Barbara Fiesta Stock Horse Show and Rodeo and the annual Ventura County Fair Rodeo. “I was a late bloomer but being around different ranches and the team made me appreciate Western values and the cowboy lifestyle,” she says. “It’s a straightforward attitude, no beating around the bush, you cowboy up and get on with things.”

Despite romanticized ideas about the Old West being a space dominated mainly by white, square-jawed, and gunslinging cowboys, 16th-century Spanish colonial ranching styles meant the time was more diverse than people realize. Many of the early cowhands were Native people, and by the 19th-century, Mexican vaqueros were prevalent, as were Black cowboys who thrived across the West. But in this hardscrabble landscape, women also played prominent roles making their mark on America’s frontier.

Female figures embodying the grit and grace spirit included legendary sharpshooter Annie Oakley; Shoshone interpreter and guide Sacagawea who joined the Lewis and Clark Corps of Discovery expedition through the Rocky Mountains to the Pacific Ocean; and African-American star-route mail carrier, Stagecoach Mary. Today, modern trailblazers like Tammy Pate celebrate women in the Western industry with her Art of the Cowgirl event, while third-generation rodeo rider Kanesha Jackson and her daughter Kortnee Solomon, are creating a legacy for women of color.

With a steely Old West determination of her own, after graduating high school, Taylor juggled part-time jobs at a grocery store and catering company to make ends meet while studying to become an EMT, still unsure of her career goals. “My uncle and I were team roping one day talking about summer jobs, and he encouraged me to apply at Alisal. At that moment, deciding to do so changed my life,” she says.

A working ranch since 1843 (Alisal’s JRC logo stands for Jose Raymundo Carrillo, the oldest continually operated cattle brand in California), The Alisal became a guest ranch in 1946 and a popular hideaway for Hollywood stars (Clark Gable married Lady Sylvia Ashley there) and families who have been coming back for generations. With so much history, Taylor is keen to keep its Western traditions alive and foster authentic horsemanship among Alisal’s guests. “I want to make sure they enjoy their time here but am always thinking of ways to enhance the experience, whether that’s adding to or modifying our programming.

Taylor pitched a now popular barrel racing skills class, while a team-concept drill class (a choreographed riding pattern for rodeo opening ceremonies) was added to the wrangler workshops last year. She also hosted two Unbridled Retreats with female horse listener Devon Combs. Getting to lend a hand at both equine therapy events, she says the experience was powerful and life-changing for every woman who attended, including herself, after the sudden loss of her best friend earlier in the year.

Although trail rides are an Alisal mainstay, the job of head wrangler isn’t all horseback rides through the rolling hills—as gorgeous as they are. With meetings to attend, budgets to go over, and vet calls to make, Taylor is up at sunrise to bring in the herd and sometimes lend a hand on the 10,500-acre Alisal Cattle Ranch gathering cattle on shipping days before heading back to her “other office.”

Ranch operations vary depending on traditions and infrastructure, but Taylor says the team feels like family despite Alisal’s size. “It’s very female-led in terms of management, and I’ve had great support from our general manager, Kathleen. I also partner closely with the herd manager, Mark, who has been on the property for 18 years and oversees the direction of our horses. We were the only full-time barn employees here during [pandemic] lockdown, loading the hay truck and bringing in the horses during rainstorms. We did it all.”

Since taking over as head wrangler, she shares that gender stereotypes haven’t been an issue, more so questions about her age. “I don’t know if there was any outside adversity or more the personal pressure of second-guessing myself. That’s something I’ve had to deal with, especially taking on the position just over two and a half years ago and then navigating the pandemic, which is a whole other story.”

Knowing the horses better than she knows most of her own family, Taylor explains that guests are matched up based on skill level, and animal welfare always comes first. “We work with each horse anywhere from a couple of months to a couple of years to make sure they’re trail ride ready and don’t get burnt out,” she says, adding her favorite changes often, but right now it’s “a young and sweet-natured bay draft horse called Fox.” (Her horse, Duke, notwithstanding, of course.) 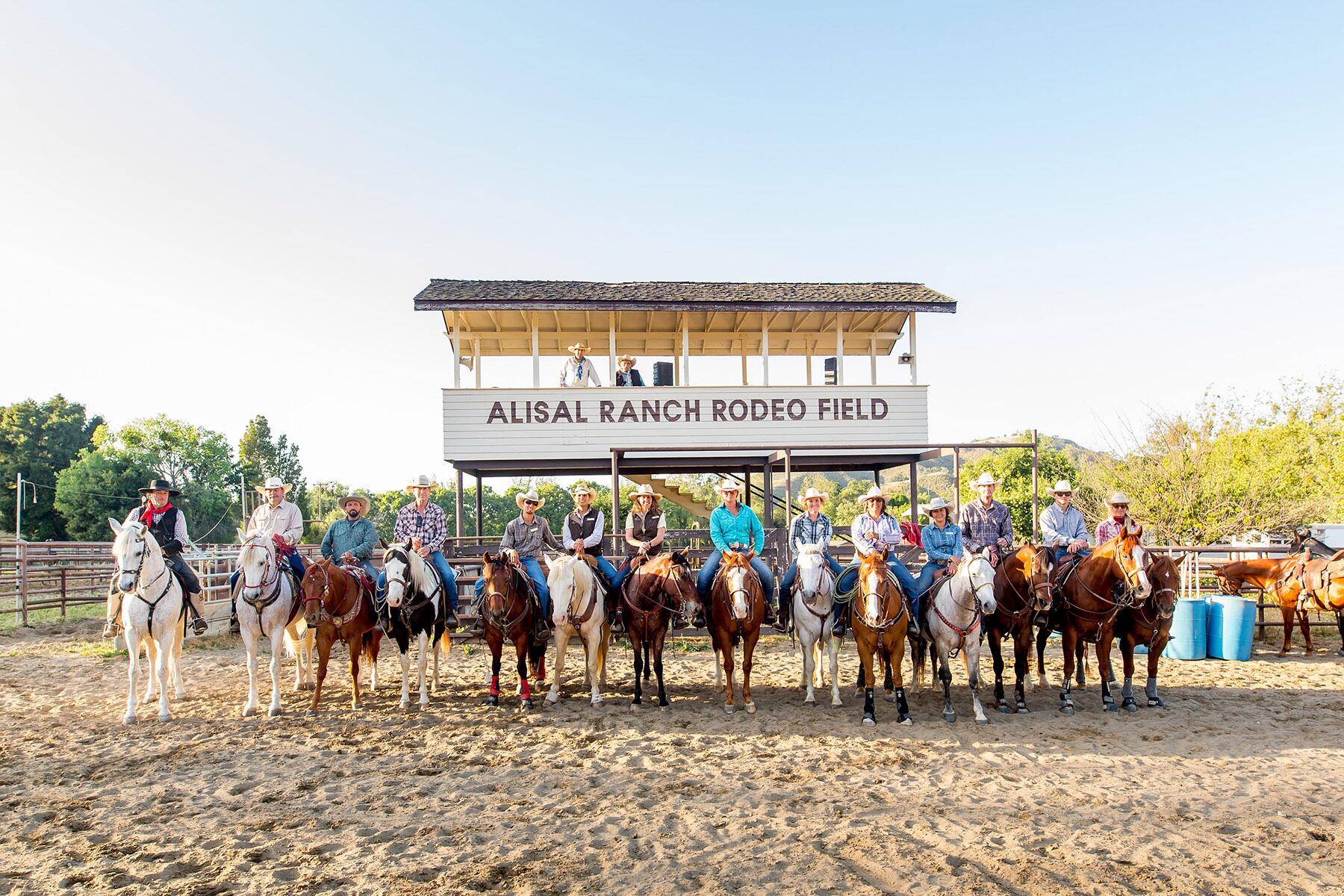 For Taylor, the camaraderie and sense of belonging in the ranching community, which she explains will do anything for anyone, is second to none and, right now, exactly where she wants to be. “When I was younger, I always said I just wanted to live in a barn and own a herd of 100 horses, and well, here I am. I couldn’t be happier.”