We all know you can get your kicks on Route 66 and enjoy some of our country’s best scenery on Route 1 in California. But what about the state’s lesser-known Route 395, where over an 85-mile stretch you can travel from the highest peak in the continental United States to the lowest point in North America?

It’s a journey of extremes in other ways as you experience widely varying temperatures, from the chilly snows of the Sierra Nevada mountains to the blistering winds of the hottest place on the planet. There are emotional highs and lows as well, from ziplining down the slopes of Mammoth Mountain to touring the somber ruins of a former internment camp.

Other sites along the way include an abandoned ghost town said to be populated by real ghosts, an aging opera house permanently populated with an audience of colorful 16th-century guests painted on the walls, the snow-capped peaks of the Minaret Vista, and the burning sands of Death Valley. Here are where to find the highs and lows of Route 395.

The Ghost Town of Bodie 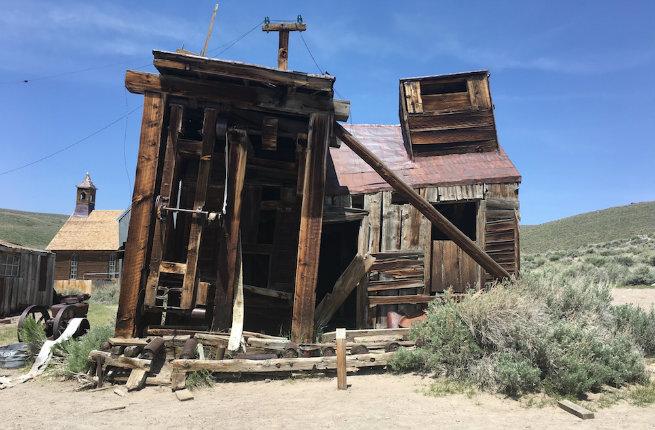 In the northern section of 395, Bodie was founded to support the burgeoning mining industry in the mid-1800s. This once-bustling gold mining town housed around 10,000 people, three dairies, several daily newspapers and plenty of “hurdy-gurdy” girls to keep the miners company. Residents here dealt with 100-mile-an-hour winds, snows up to 20 feet, and the relative lawlessness of the wild, wild west, which may explain the popularity of the more than 60 saloons.

Designated a California State Park in 1962, the town is preserved in what is called a state of “arrested decay” with about five percent of the buildings still intact. Several homes remain untouched, still stocked with dishes and other artifacts over 50 years after the last residents left when the mining industry dried up.

Guests can take self-guided tours through the deserted town, and be on the lookout for the ghosts that have been sighted peering through windows of the old wooden structures. Daily free park talks and tours are available in the summer months, with two-hour private tours available for an additional fee.

PLAN YOUR TRIP: Check to make sure the park is open before you go: accessibility down its long gravel road can be an issue in the winter and when it rains. 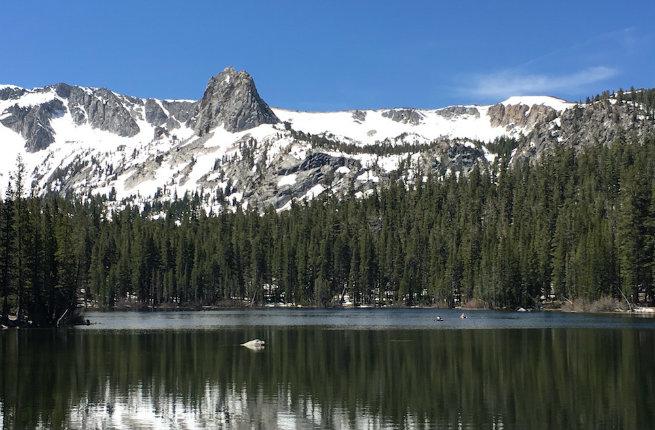 Snow-related activities are available just about year-round in the town of Mammoth Lakes and the Eastern Sierra area. Skiers and snowboarders still zip down the mountain at Mammoth Lakes Resort in the summer, donning bathing suits for a 4th of July celebration.

Mammoth Mountain Ski Area boasts the best conditions in the state for snow-related sports. It gets close to 400 inches of snow a year and has the highest elevation summit in the state, at 11,053 feet. Drive up the mountain past the resort for stunning views of the snow-capped Minaret Vista, a panorama of mountain peaks. 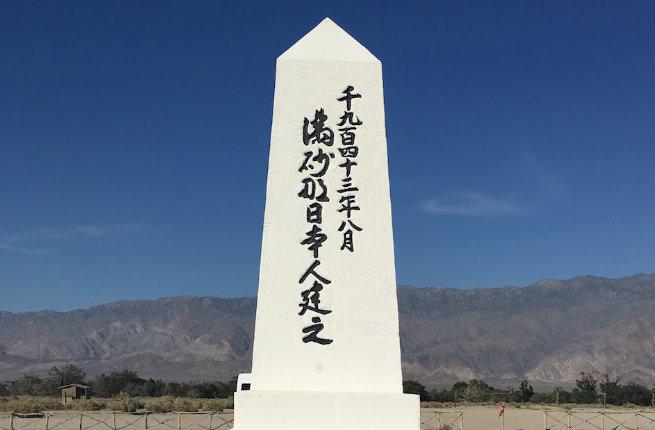 Long Pine was named after the one pine tree found at the mouth of Lone Pine Canyon when the town was founded in the 1860’s to supply local mining communities. Now it’s known as a favorite filming location for hundreds of westerns. Film buffs will want to visit the Lone Pine Film History Museum to view artifacts like a Wells Fargo coach, western saddles of Hollywood, and a 1928 Lincoln camera car.

It’s also the home to Mount Whitney, the tallest peak in the continental United States. It soars to an elevation of 14,505 feet and its trail is one of the most popular in the country, but definitely not one for the casual hiker. A permit is required for the 2-3-day backpacking trip.

A trip to Manzanar National Historic Site is a sobering one. This was the site of one of the 10 military-style camps where 110,000 Japanese American citizens were taken from their homes and imprisoned by the US Government in 1942. After watching the film Remembering Manzanar, which depicted daily life in the camp from 1942 to 1945, visitors can take a self-guided walking and driving tour of the site that includes two reconstructed barracks, excavated gardens, and a monument strewn with origami garlands. 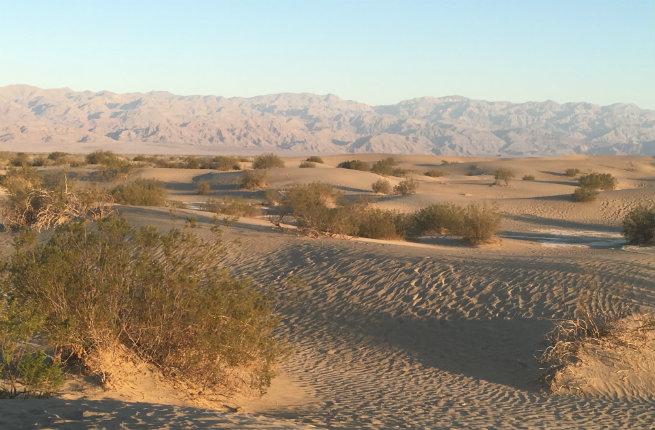 Water, water, water. And air conditioning. You’ll need those for a visit to Death Valley National Park where the official highest temperature recorded is 134 degrees, making Death Valley the hottest place on the planet. Walking outside can feel like facing down a blow dryer on its hottest setting and dehydration can set in quickly. Highlights of this 3.4-million-acre park include a drive through the nine-mile Artist’s Drive and Artist’s Palette where the roads are lined with jagged hills with vibrant layers of multi-colored volcanic and sedimentary rock, and Badwater Basin, the lowest point in North America, where the salt-filled flats are at 282 feet below sea level.

Waking before dawn is worth it to witness sunrise over the Mesquite Flat Sand Dunes. Trudge along the rippled dunes dotted with animal tracks in the early-morning darkness, then wait for the sun to come bursting over the mountain, and watch as blazes of color on the nearby mountains slowly light up with the rising sun. Guided tours are available from November to March. 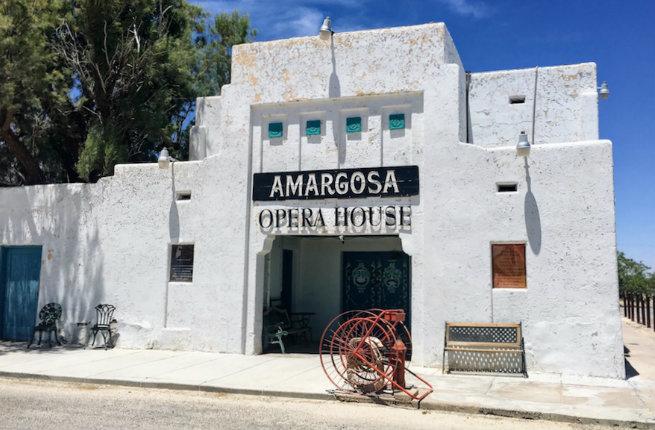 Miles from the closest manmade structure, a tiny crossroads appears in the desert with an aging one-story hotel. The small dilapidated hotel formerly housed miners and had been turned into the grandiose-sounding Amargosa Opera House and Hotel.

A Broadway dancer who wanted to create her own shows, Marta Beckett left New York in 1967 on a trip with her husband. After stumbling upon a small social hall in a tiny mining town, they rented it for $45 a month and created the Amargosa Opera House. What a dreamer—it was in the middle of the desert in Death Valley, 30 miles from the closest gas station. But Marta created her shows, designed her costumes, and began performing three nights a week to sparse crowds. She then became inspired to paint her own audience on the wall, consisting of nuns, acrobats, royalty, and townspeople from the 16th century. Eventually real audiences found her, and she performed up until 2012. Marta recently died at the age of 92, but performances are still held seasonally in Amargosa Opera House.