From urchin-eating sea otters to porpoises to orcas to humpback whales, catch a glimpse of these beautiful marine mammals in California.

California has miles upon miles of coastline. Marine wildlife is abundant in the Pacific Ocean, where many animals can be seen, depending on the time of year. You might witness cetaceans or blue or gray whales migrating between Alaska and Mexico. You just need to be in the right place during the right season…and know where to look.

Sometimes you’ll need to hop aboard a boat for optimal whale viewing but sometimes, with just a pair of binoculars, you can be in for a magical surprise. Observing marine wildlife in their habitats is exciting, especially when you catch a glimpse of harbor or elephant seals playing on the sand (or even mating), or sea otters cracking open sea urchins on their chests, especially since they are listed as threatened on the Endangered Species Act. These marine animals can be easily spotted throughout the coast of California. 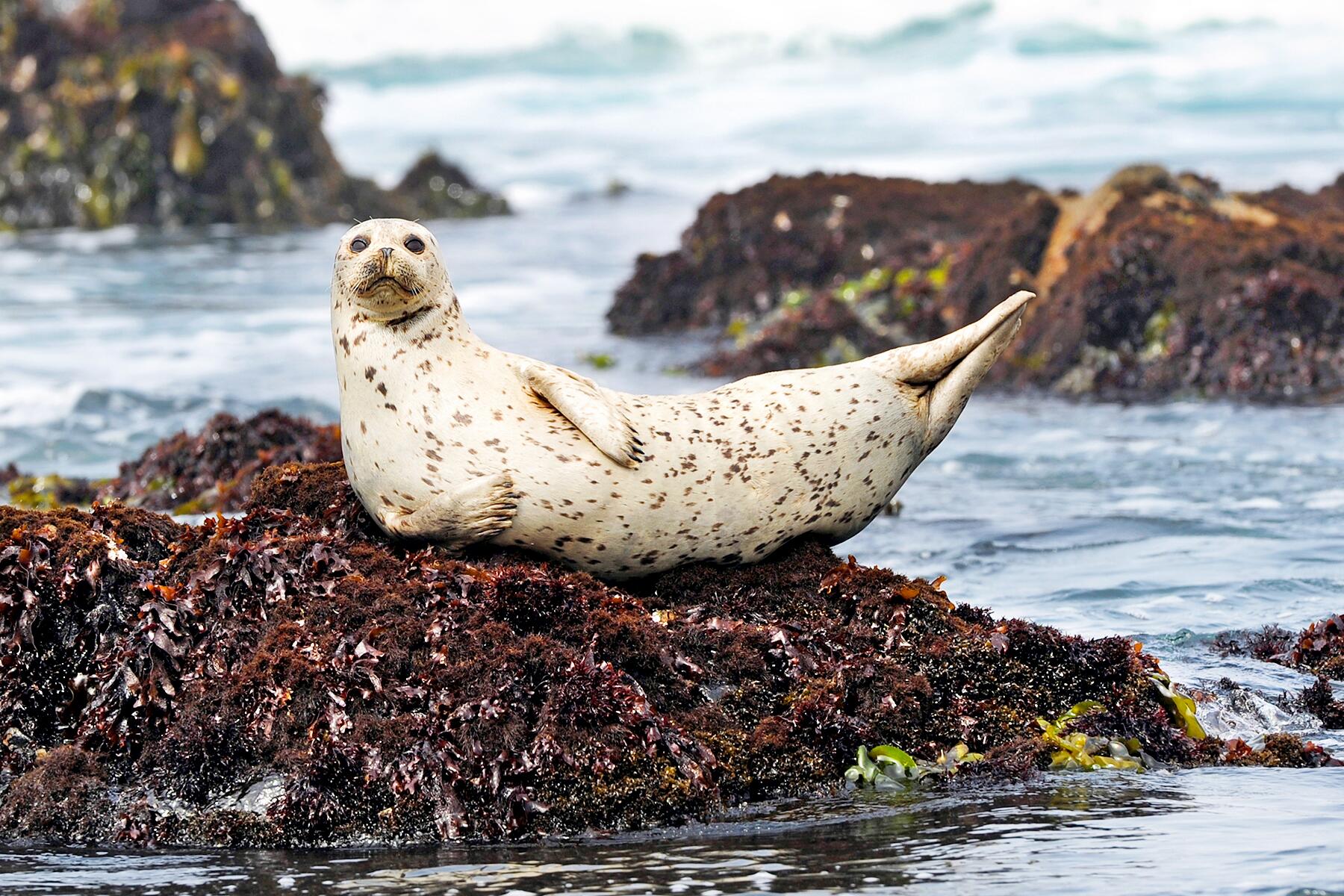 Point Reyes National Seashore has the second-highest population of harbor seals in California. Although some harbor seals migrate in search of warmer waters during the winter, many stay year-round in Point Reyes. Harbor seals have a gray coloring with spots; males can weigh up to 300 pounds and females around 250 pounds.

Harbor seals spend equal time on land and in the sea. That’s good for us for catching a glimpse of them. They often stay near the shoreline so they can be easy to spot while walking along the beach, surfing, or kayaking. Harbor seals are naturally curious but timid. Just because they’re on land doesn’t mean you should get too close. In fact, they’re easily spooked by humans, so keep at least 300 feet away if you see one.

INSIDER TIPVisit the National Point Reyes Seashore for a chance to spot these delightful pinnipeds year-round. 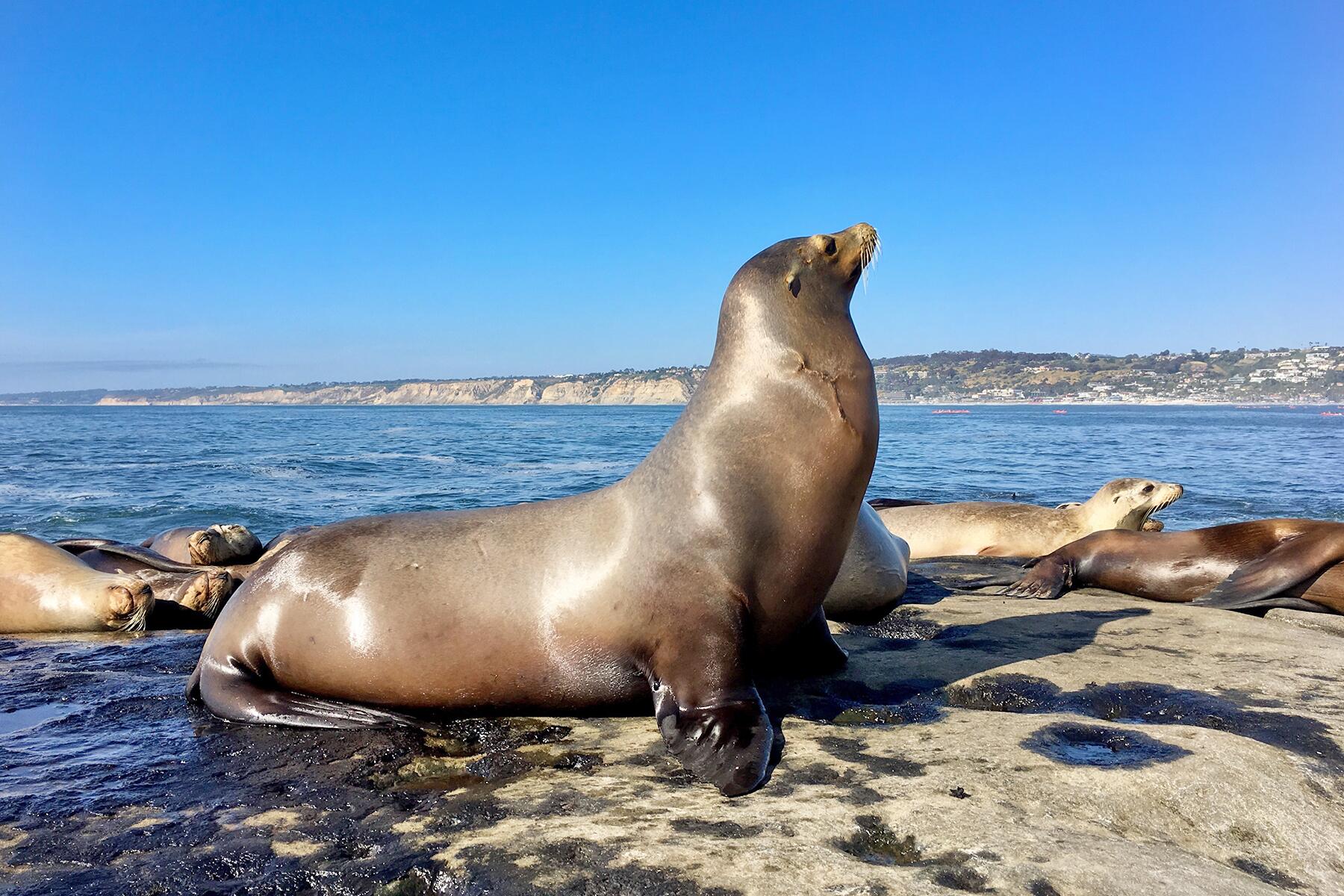 California sea lions have typically been represented as a circus seal in films and marine mammal shows but most of them are the California sea lion. They’re smart and playful and fast, often swimming as fast as 25 mph. Males are sufficiently bigger in stature and weight than females, reaching upwards of 600-800 pounds. They can be a mahogany to a brown sugar hue and as they age, the fur on their head gets lighter. Want to easily distinguish a sea lion from a seal? Sea lions have whiskers and earflaps.

Sea lions live in the Pacific Ocean from Alaska to Baja Mexico and typically reproduce near the Channel Islands in southern California.

INSIDER TIPIf you’re in San Francisco, visit the famous Pier 39 where there’s a colony of sea lions that can usually be seen year-round. 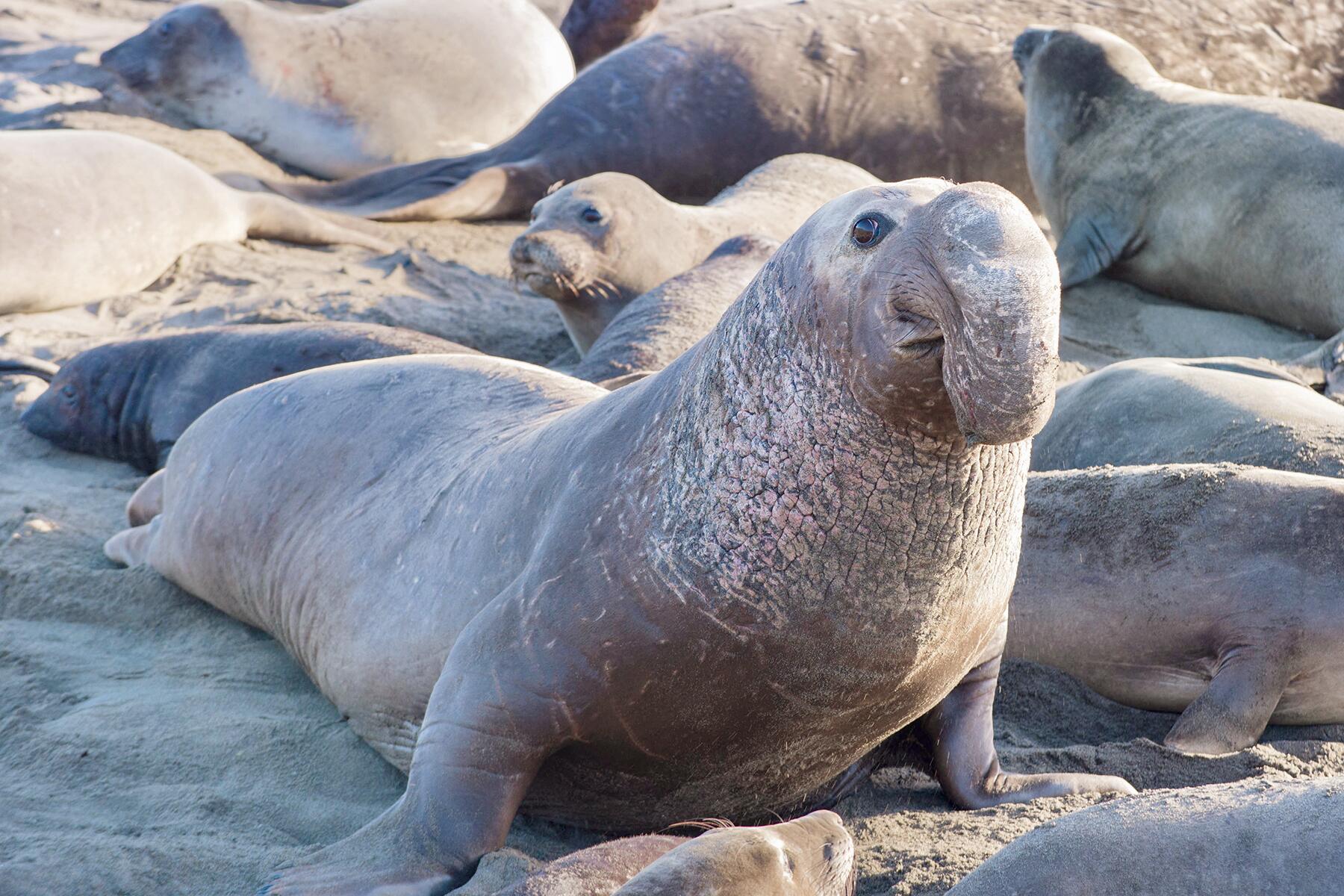 Northern elephant seals can be found in different areas of California, and some stay permanently while others migrate between Alaska and Mexico. Their lifespan is considered short—around nine years—compared to their relative, the southern elephant seals that reside in the arctic. Researchers have uncovered that they feed continuously for several months, usually in the summer and fall. Males and females don’t often eat together. In fact, they have different eating routines and areas where they find food.

The majority of their life is spent in the water, most of it underwater, eating, diving, migrating, and sleeping. Capable of diving to depths of 2,000 feet with an average dive of 30 minutes, this ability allows them to not have to compete for food. A big bonus since many sea creatures don’t have the ability to go to the same depths of the ocean.

INSIDER TIPSpot them in Point Reyes National Seashore, in Año Nuevo State Reserve or Point Piedras Blancas, where they can be seen giving birth, sleeping on the sand, and playing for many months of the year. 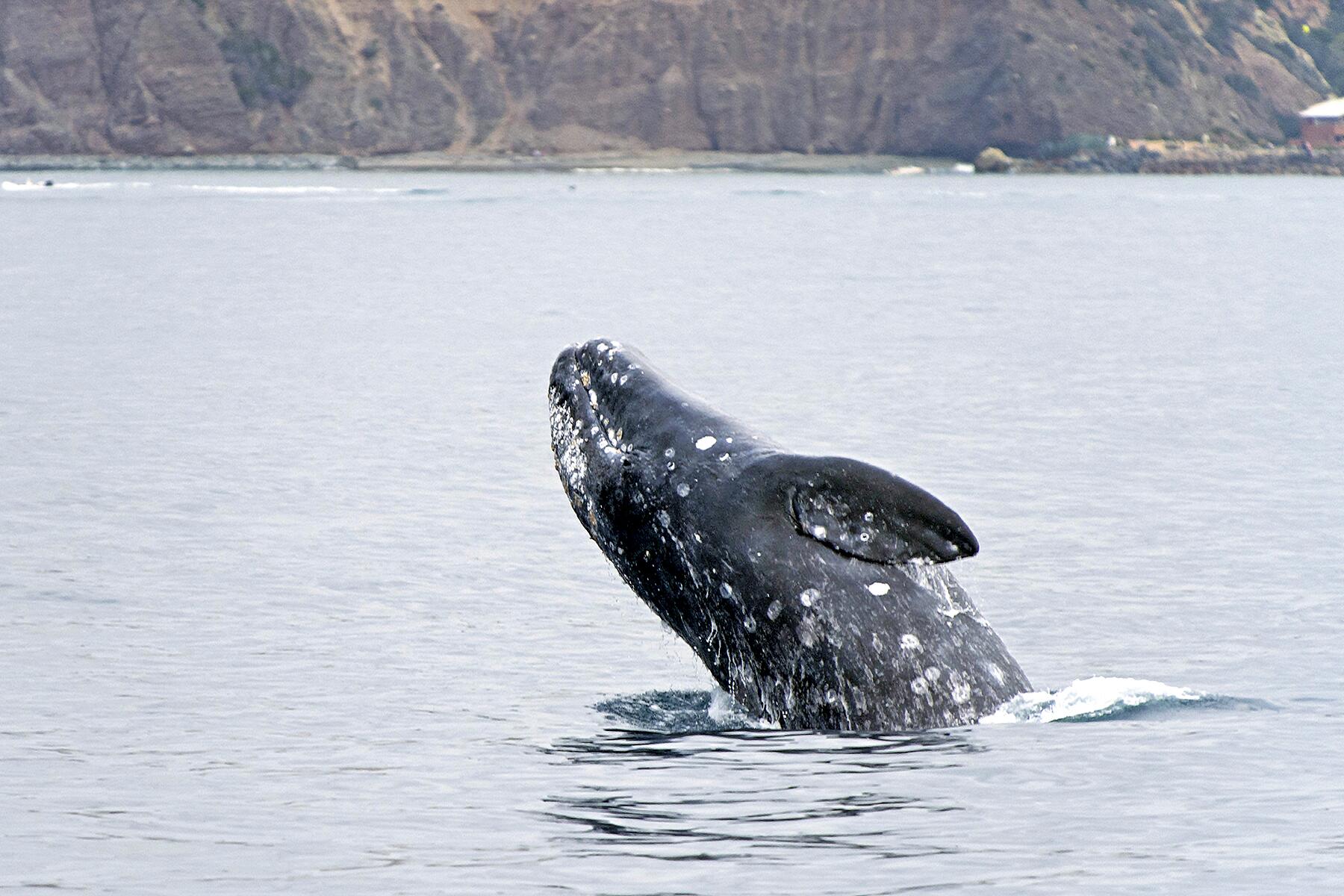 Gray whales are a type of baleen whale and can reach 50 feet in length and weigh over 40 tons, the equivalent of 80,000 pounds. They are bottom feeders, often eating crustaceans.

Gray whales have incredibly long annual migrations—around 10,000-12,000 miles—as they breed in warmer, southern waters, and then head to Alaska and the Arctic to feed. The entire journey takes around five to six months.

INSIDER TIPCatch a glimpse of over 20,000 gray whales migrating south in December and January from the lighthouse observation deck at the National Seashore Point Reyes as they head south, or spot them in March when they head North. 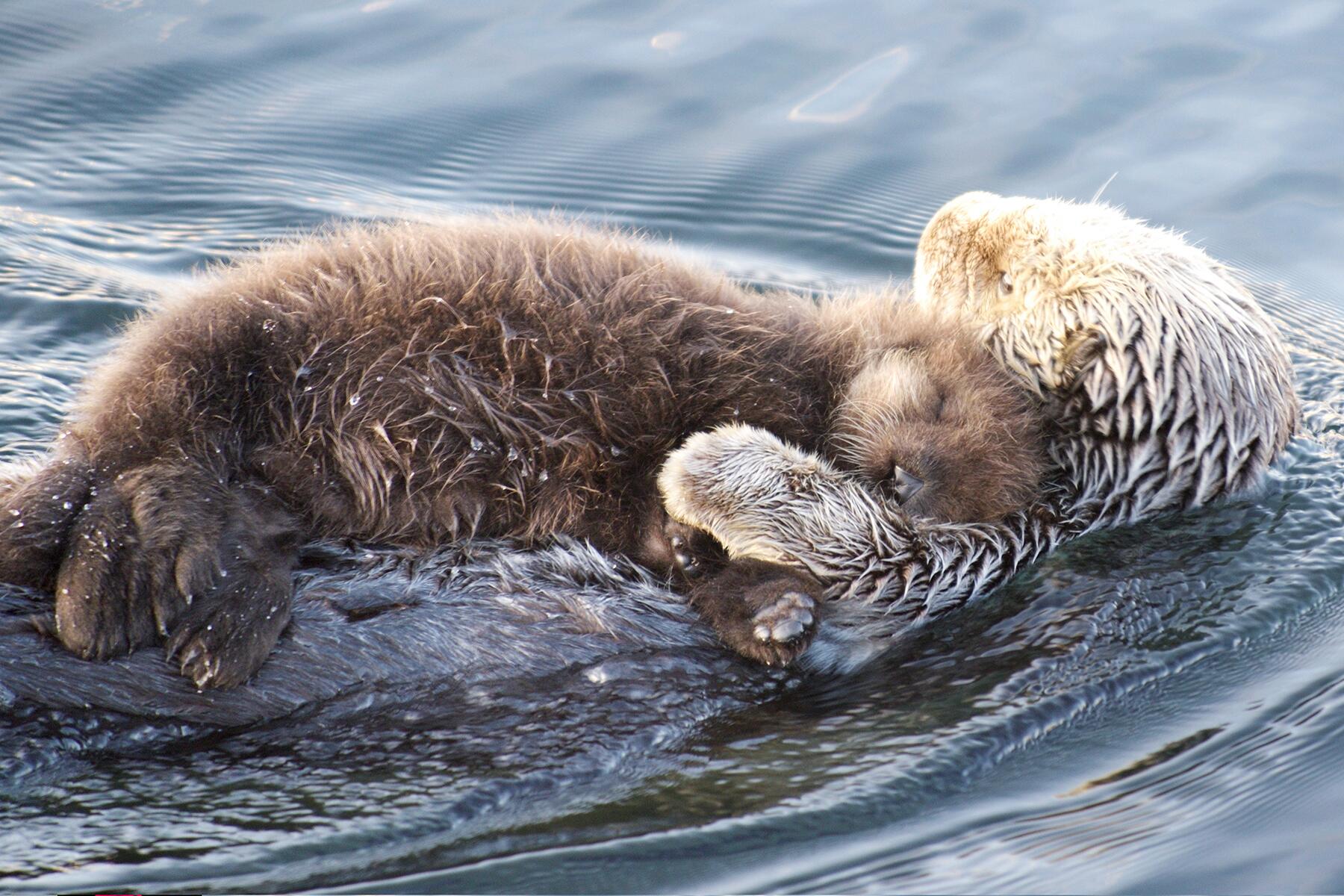 Sea otters may look like a cute and cuddly stuffed animal from a distance, but you won’t want to get too close to these wild animals—their teeth and claws are quite sharp. There are three different types of sea otters and the ones that live in the Golden State are known as the “Southern Sea Otter” or, more appropriately, the “California Sea Otter.” They’re considered the smallest marine mammal in North America and are typically around four feet in length and can weigh up to 70 pounds.

Sea otters are an important part of the ocean’s kelp forest and have a symbiotic relationship with the sea; often the health of a sea otter population is an indicator of how healthy the sea is. California sea otters don’t eat fish; their diet is based on snails, mussels, crabs, clams, and spiky sea urchins.

INSIDER TIPVisit Monterey for an opportunity to see them in Monterey Bay, Point Lobos State Reserve, or off the coast of Big Sur. If you have your heart set on seeing one in real life (and don’t want to leave it up to chance), consider visiting the Monterey Bay Aquarium. 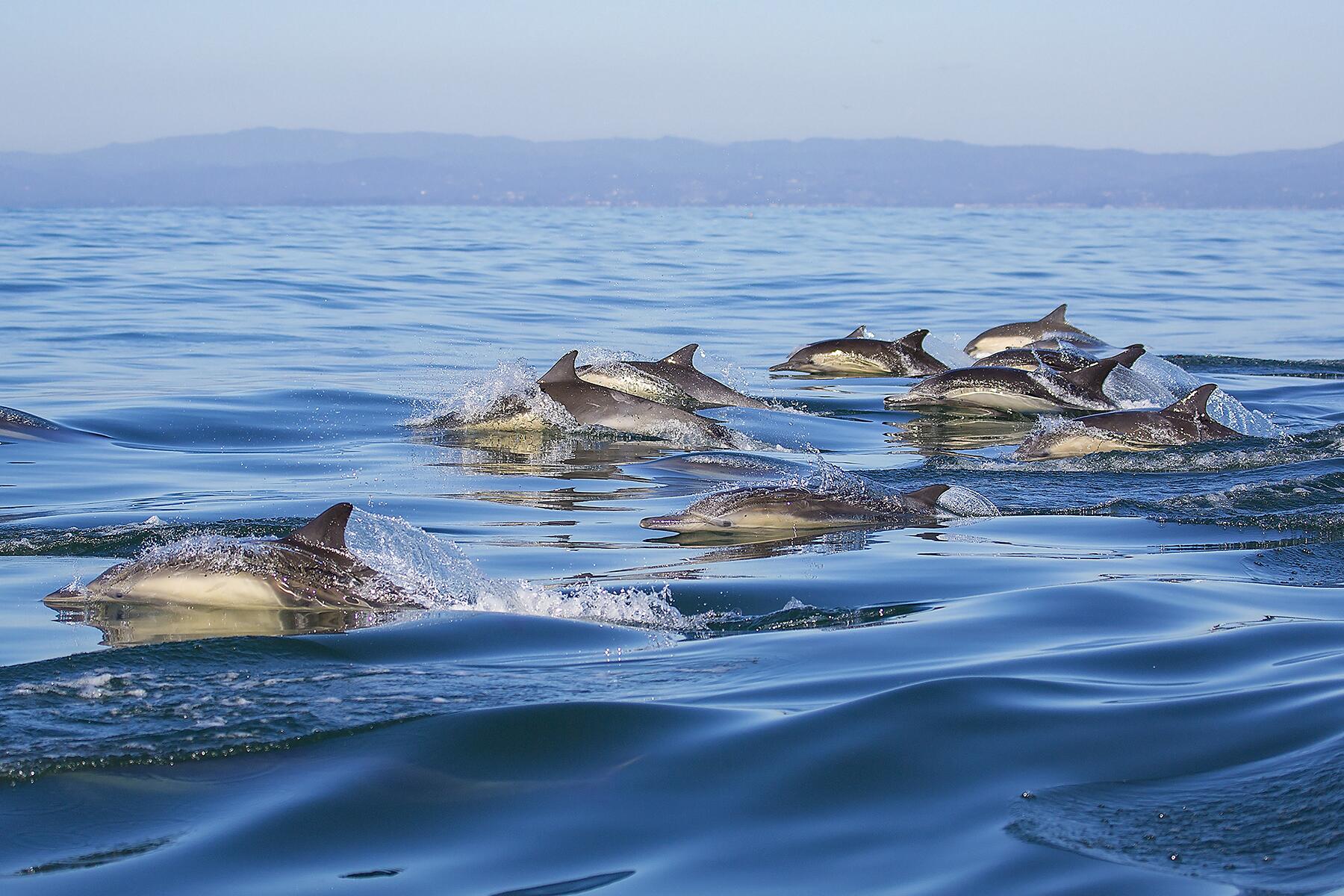 Dolphins are a type of baleen whale. There are several varieties of dolphin that can be seen off the coast of California’s Pacific Ocean. Because their teeth aren’t very strong, they eat their prey whole with a diet based on fish, cephalopods, and crustaceans. Dolphins communicate, hunt, navigate, and can detect friends and foes thanks to echolocation.

INSIDER TIPIf you spend time along the Southern California coastline, you’re bound to see dolphins. Check out the Ventura Harbour. You can also see them along the Central Coast, Santa Cruz, and in Monterey Bay. 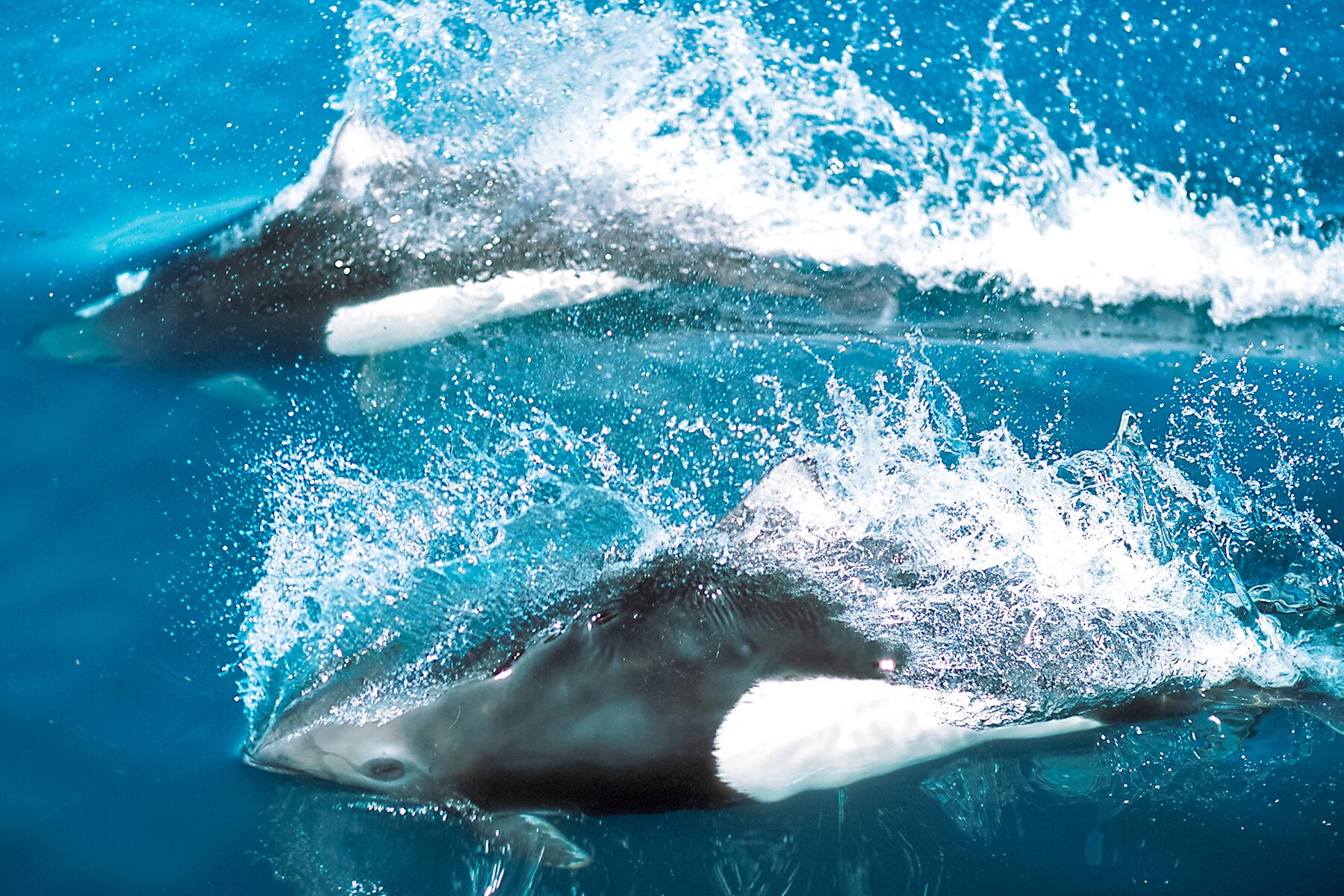 Porpoises are part of the dolphin family and are a baleen whale. They are smaller in size than dolphins and have adapted to live in colder waters. At first glance, porpoises can be hard to distinguish from a dolphin, but there are a few indicators that set them apart. Porpoises have rounded noses and rectangular, flat teeth. And their dorsal fin has a triangular shape, similar to a shark. One type is called Dall’s porpoise and can sometimes be mistaken for baby orcas because of their black-and-white coloring.

INSIDER TIPBecause porpoises spend time in shallower water, they can often be spotted from many vantage points including the San Francisco Bay, Santa Cruz, Central Coast, and Southern California. Harbour Porpoises are shy, so it’s not likely you’ll see them on a boating tour. 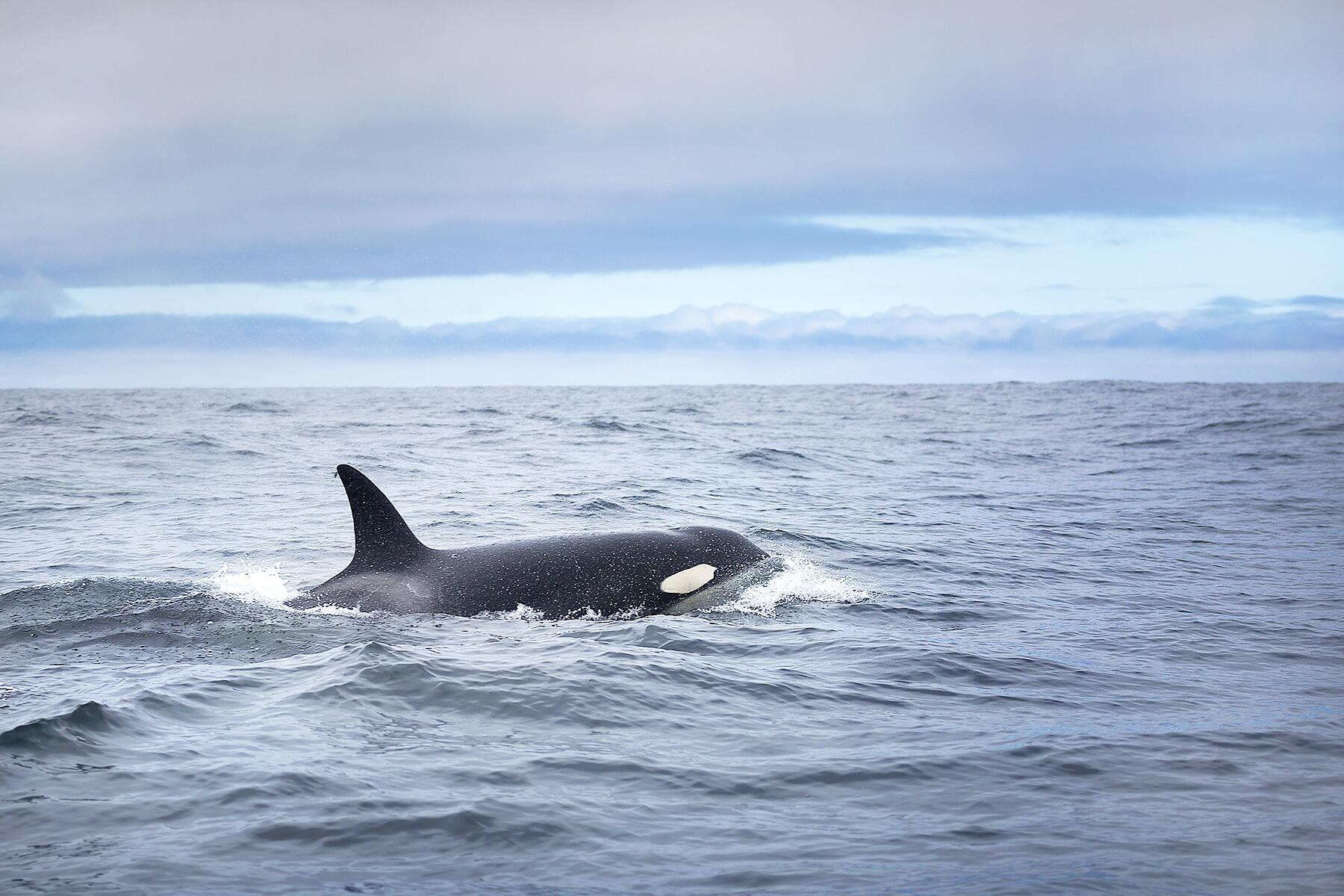 Orcas are social and intelligent mammals. Traveling in pods, these groups can consist of a few to 40 orcas and are often intergenerational. Orcas have a not-so-nice moniker—killer whale—which refers to their hunting and eating other marine animals, such as harbor seals, turtles, and even sea birds. Turns out, killer whales are the largest type of dolphin.

Capable of swimming as fast as 30-35 mph, they are considered some of the fastest marine mammals.

INSIDER TIPOrcas are best spotted on a boat tour rather than on the shoreline, as they prefer open water. December through May is prime time to see them. 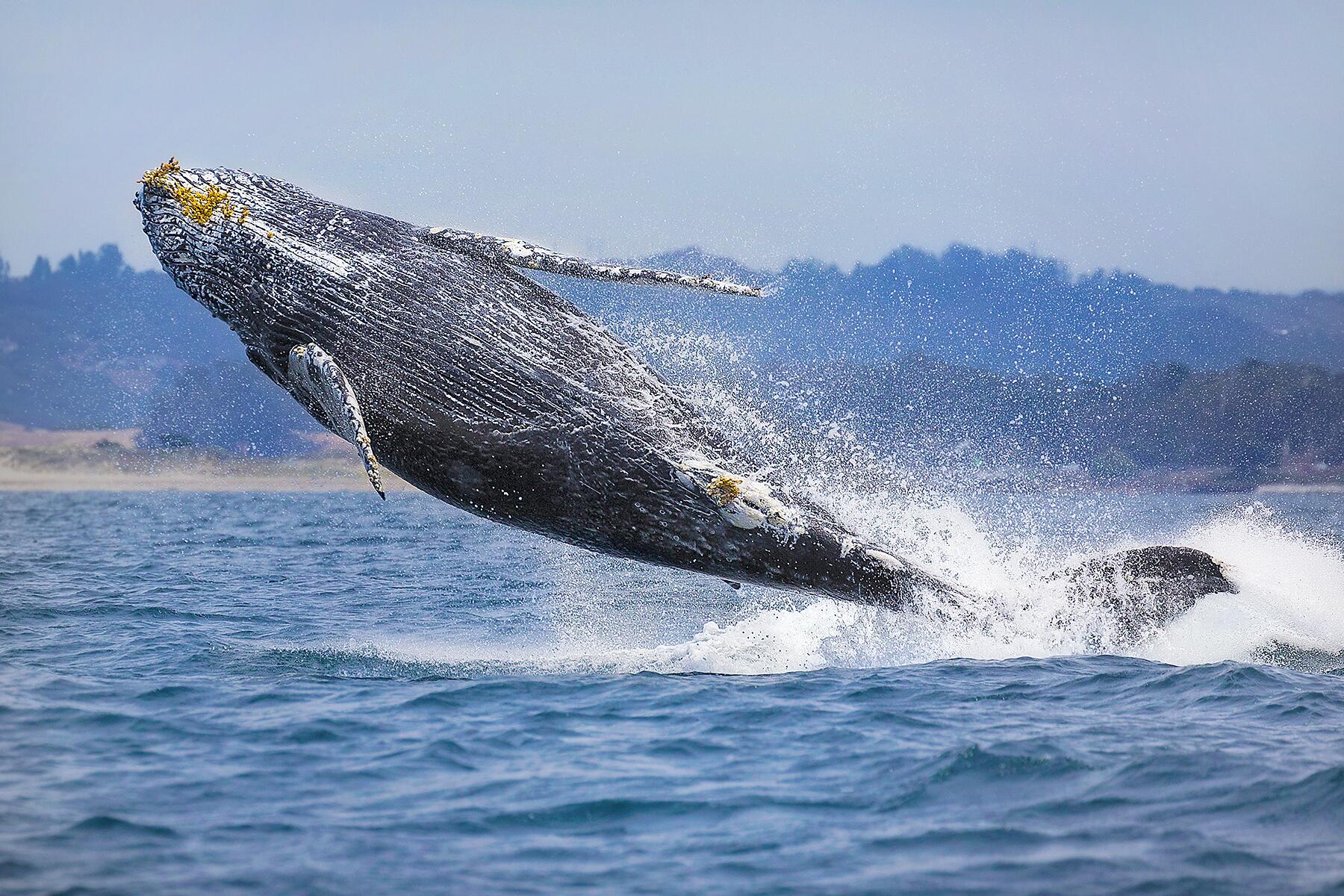 Humpback whales can reach up to 50 feet in length, with the females usually longer and heavier than the males. They can weigh 30 tons–equivalent to 70,000 pounds. Sometimes these magical creatures can be confused for the sperm whale. These curious creatures are capable of acrobatic aerials as well as swimming on their backs.

Humpback whales feast on fish and krill. They have a special technique to trap and catch their prey. Diving quickly, as soon as they spot their prey, humpbacks go underneath them and blow air through their airhole to send up lots of air bubbles, which helps trap and confuse their prey. Afterward, they literally go in for the kill with their mouths wide open.

INSIDER TIPThe best time to spot humpback whales is from May to September from a whale-watching boat tour in southern California or off the Channel Islands near Santa Barbara. 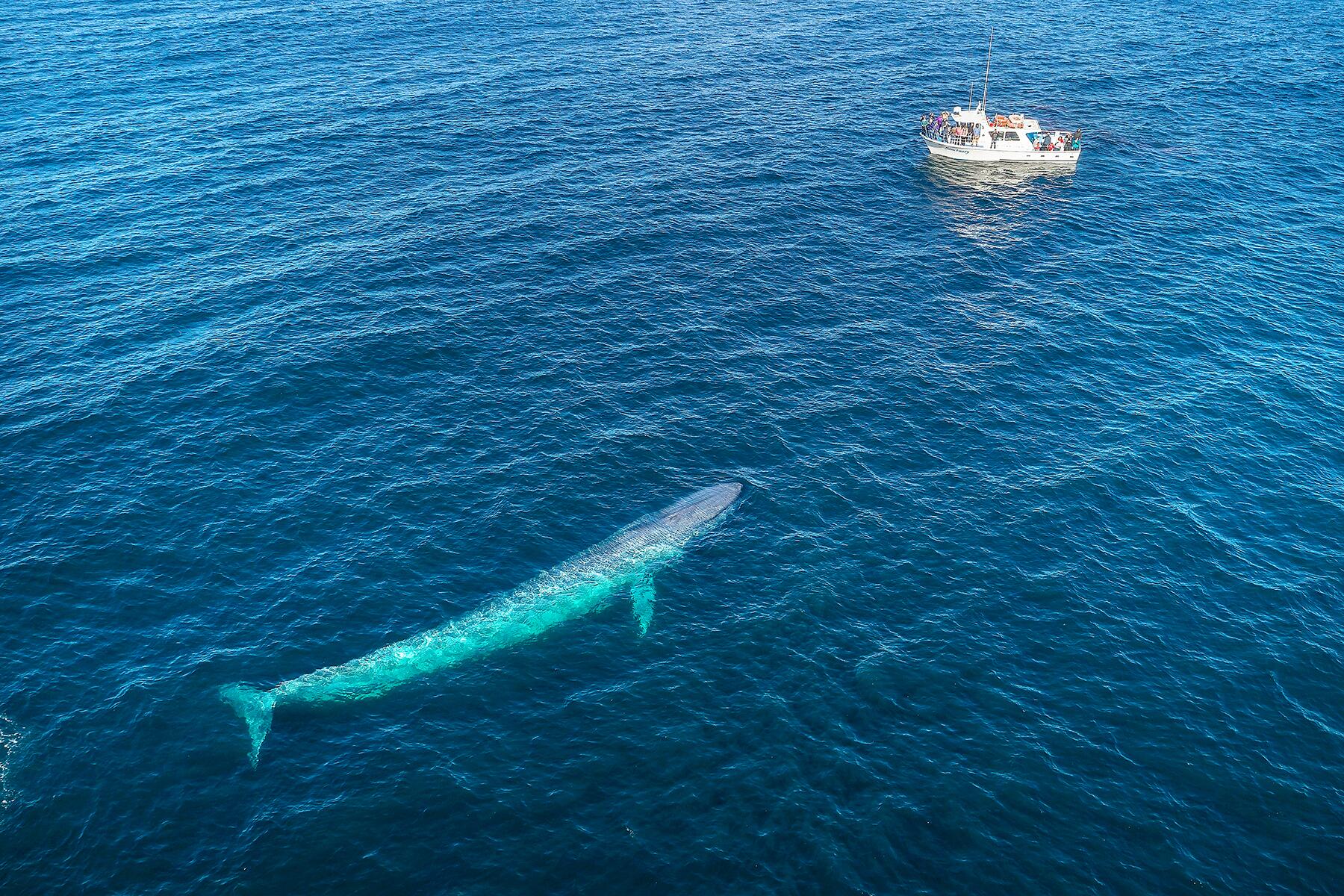 Blue whales migrate south to warmer waters in the fall where they will breed and spend summers off the California coast. Blue whales are the largest animal on earth and can reach 80-105 feet in length. They can weigh between 160-200 tons, equal to about 400,000 pounds. Better yet, in an effort to imagine what these numbers mean, that’s around 30 elephants. Their diet is primarily krill, which are small crustaceans, of which adults consume upwards of 8,000 pounds per day.

INSIDER TIPBecause blue whales rarely swim in shallow water, the best way to see blue whales is on a whale-watching tour, such as in Monterey Bay, Moss Landing, or in Southern California.

Lauren -- dolphins (#6) and porpoises (#7) are TOOTHED WHALES (odontocetes) not baleen whales. Please do your research and don't publish fake news! And please correct this article.