Here's how a tiny Ozarks Mountain resort became both a religious mecca and an LGBTQ vacation haven.

Conservative Christians and progressive LGBTQ folks: these are the two largest contingents of tourists who descend upon Eureka Springs, Arkansas, every weekend. They walk the same dizzyingly narrow and hilly streets and pop inside many of the same folk-art galleries and down-home cafes. They relax among the gracious lobbies and leafy gardens of the same historic spa hotels. And somehow these two disparate groups—who in much of the country often find themselves politically and culturally at odds—manage to coexist amicably. In this verdant mountain hamlet in northwest Arkansas’ Ozark Mountains, it’s been this way for more than 50 years.

This unusual dynamic is a big part of what makes Eureka Springs such a special place to visit, and it directly inspired the critically acclaimed 2018 indie documentary, The Gospel of Eureka, a poignant and often very funny exploration of how the town’s dual personas intersect and overlap. The film provides a remarkable glimpse of the town’s current vibe. But you might be wondering, how did Eureka Springs get this way?

Like a number of vacation spots, the Eureka Springs’ fortunes have waxed and waned over the years. After curative natural springs were discovered here in the 1870s, it developed into a health resort (not unlike the state’s larger spa resort, Hot Springs, about 200 miles south). For 40 years, businesses prospered, but the rise in popularity of the automobile—which the town’s steep narrow streets couldn’t accommodate—threw Eureka Springs into a recession that was exacerbated by the Depression. By the 1950s only about 700 full-time residents—many of them creative spirits or societal drop-outs—remained, taking advantage of the stunning scenery, cheap Victorian houses, and relative isolation.

In the 1960s, with the countercultural revolution in full swing, the town became an increasingly fervent draw for hippies, a good many of whom identified as LGBTQ. Also during this decade, a right-wing Christian activist named Gerald L.K. Smith bought a plot of land outside the village center and constructed a 65-foot-tall statue of Christ as well as a 4,100-foot amphitheater, in which he began mounting spectacular, multi-actor outdoor productions of The Great Passion Play. This development instantly attracted legions of Christian families to town, and they’ve been flocking here ever since.

Simultaneously, Eureka Springs’ friendly and free-spirited reputation as a gay vacation mecca has also grown steadily. With its location in a deeply red state bordered entirely by other red states, it’s the only LGBTQ-friendly resort town within driving distance for tens of thousands of queer people. Driving times from key cities in this part of the country are three hours from Little Rock, four hours from Kansas City, five hours from Oklahoma City, six hours from St. Louis and Memphis, and eight hours from Dallas. 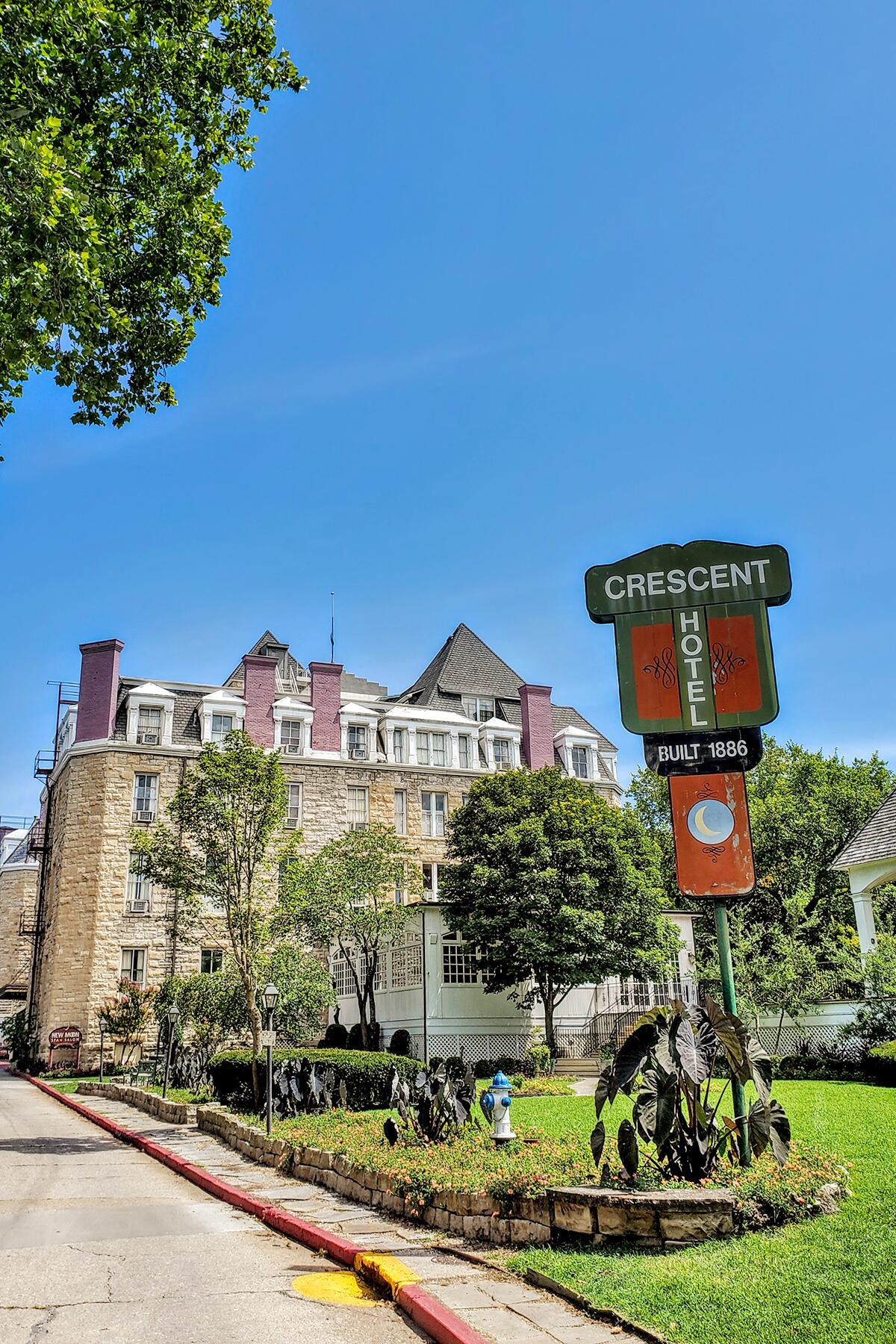 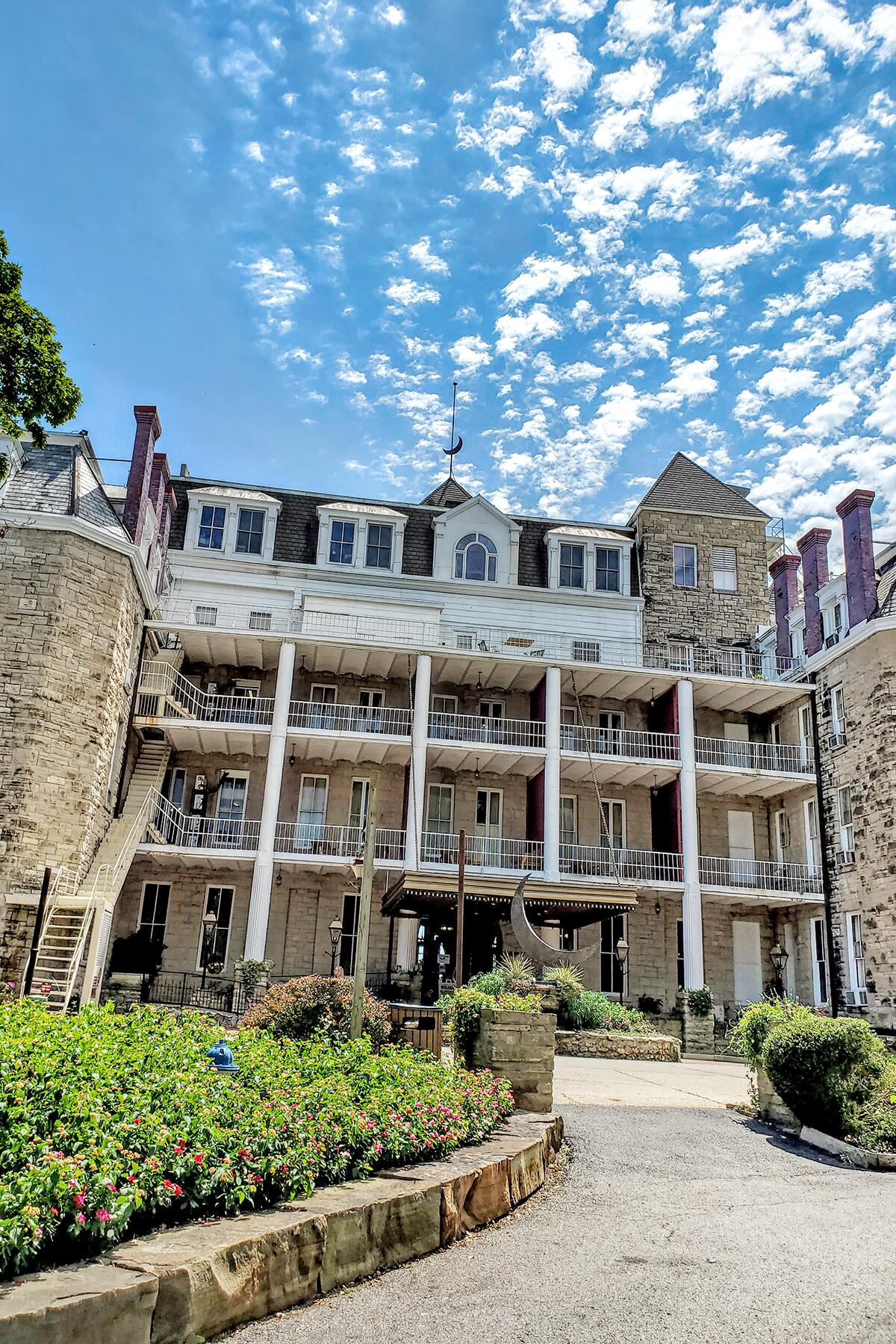 Today, Eureka Springs has about 2,100 full-time residents, but it swells with tourists on weekends. The historic downtown core is somewhat more the domain of LGBTQ folks and their allies, who operate many of the community’s historic guest houses, restaurants, and boutiques. The surrounding countryside, with its rustic lodges and family-friendly resorts, as well as the Passion Play theater and adjoining Bible Museum and gift shop, tends to be more popular with the Christian conservative set. But these jurisdictions are by no means exclusive, and plenty of mixing and mingling happens. Remarkably, tension is virtually nil—people just get along here, both locals and tourists.

“The way I see it is that the town works in a very typical Southern way,” says Donal Mosher, co-director of The Gospel of Eureka. “It’s mostly live and let live—keep your contentions and convictions apart—but the town is small, and on the street, interactions tend to be sincerely friendly. This is in part genuine and in part because even Southern manners are a selling point for attracting tourists.”

Mosher adds that the cordial sense of decorum was somewhat ruptured during the leadup to a 2015 vote on whether to uphold the town’s recently enacted anti-discrimination ordinance. This spirited campaign, which played a central role in the film, ultimately resulted in a resounding 579 to 231 vote in favor of preserving the ordinance. “Life post-vote went pretty much back to normal,” Mosher says. “Or as normal as this weird place is.”

At whatever time of year you visit, Eureka Springs has plenty to offer, some of it weird (like Snake World—”it’s basically a double-wide trailer filled with deadly snakes—and it was definitely the most frightening part of the shoot,” says Mosher), but much of it typical of the surrounding Ozarks region, such as boating and fishing in nearby rivers and lakes, and hikes through the lush countryside.

Several hotels and spas in town offer soothing soaks in bubbly mineral springs and a full slate of massage and body treatments. And the warren of narrow lanes that make up the vertiginous downtown historic district abounds with offbeat shops, convivial bars and restaurants, and colorful galleries, such as Tee Rex, a vintage toy and pop-culture shop owned by Jayme Brandt, a progressive Christian who appears in the documentary. 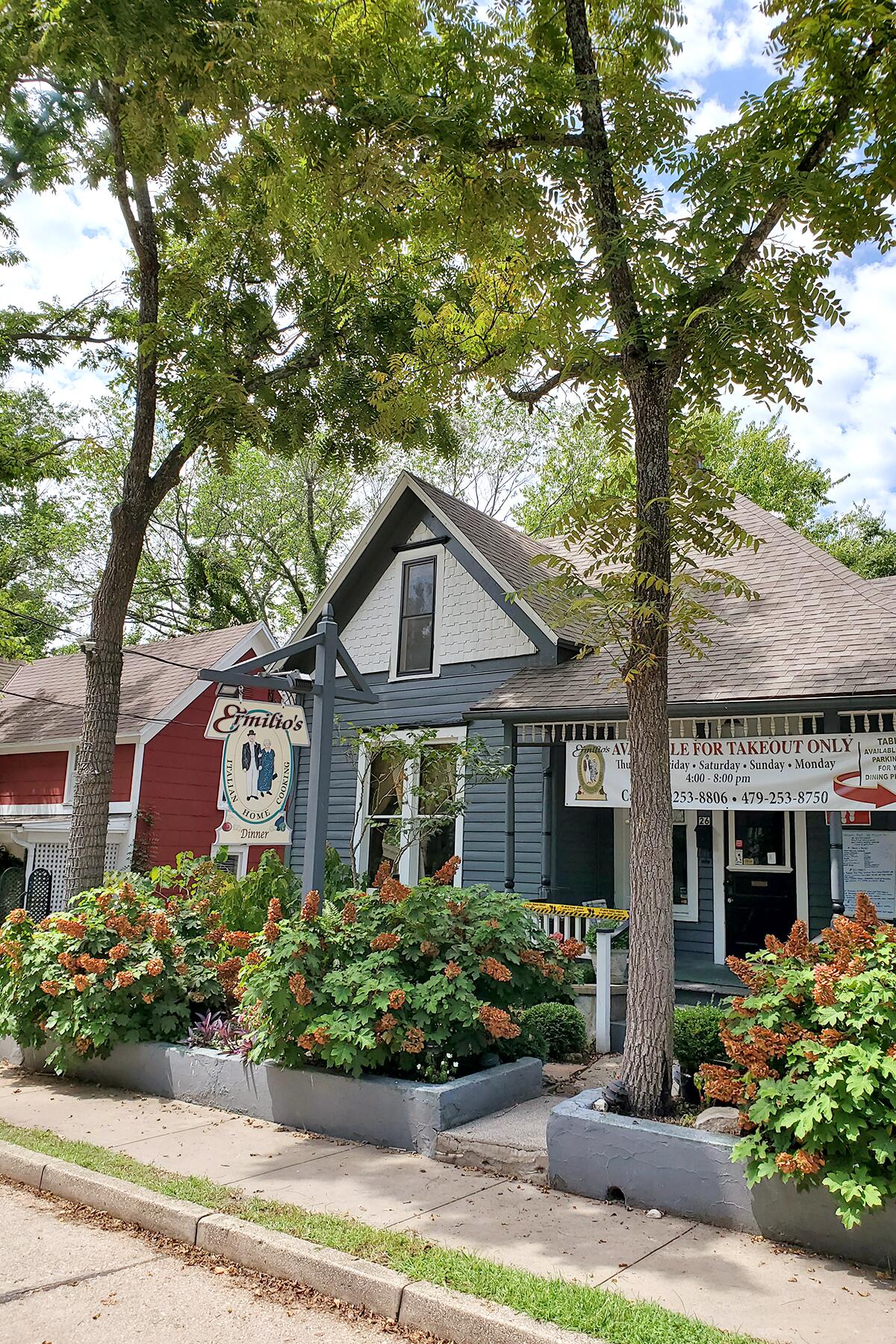 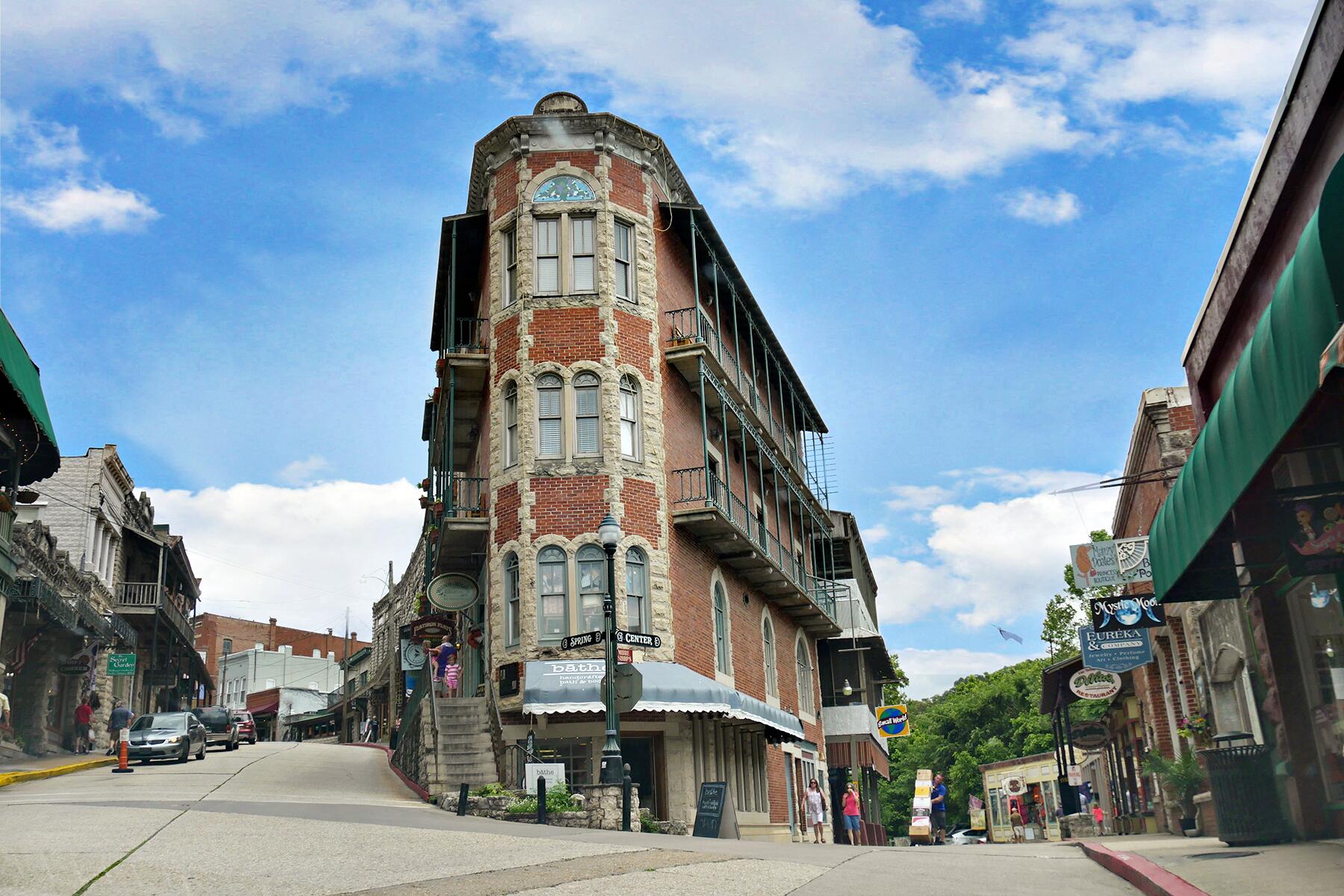 The winter months, however, can be chilly (there’s snow on occasion). It’s mostly pleasant, although sometimes a tad busy, from the spring through fall. The Passion Play is staged a few days a week from April through October (it runs with greater frequency during the summer months). And the town also hosts three Diversity Weekends (typically in early April, July, and November), which function as unofficial LGBTQ Pride celebrations and feature three days of events, from drag shows and bluegrass concerts to art exhibits and family-friendly festivals in downtown’s historic Basin Park.

A focal point of the area’s queer community, Eureka Live is the town’s favorite dance club and bar—it’s known especially for its exuberant drag shows. These performances, which featured prominently in the documentary, are often cleverly and campily juxtaposed with scenes from The Passion Play. Chelsea’s Corner Inn is a self-described “slightly off-center” locale for drinks, food, and live music, and always hosts fun parties during the Diversity Weekends. A lively spot for people-watching and soaking up the sun on a warm afternoon, Angler’s Restaurant has a sprawling deck with views of the countryside and serves what Mosher claims are the tastiest catfish po’boys in town.

You’ll find several distinctive guest houses and vintage hotels in town, such as the elegant Palace Hotel & Bath House Spa and the intimately romantic Rock Cottage Gardens B&B Inn. The most memorable place to stay, or even just to feast on pizza and sip wine on the fourth-floor SkyBar restaurant, is the stately—and allegedly haunted—1886 Crescent Hotel & Spa. The most elegant of the Victorian spa resorts that thrived during the town’s early heyday, this grande dame is set on one of the town’s highest hilltops and has been gloriously restored. “The balconies when the moon is rising or during a thunderstorm are astounding,” says Mosher, seeming to channel the magic in the atmosphere that perhaps accounts for Eureka Springs’ distinctly harmonious tenor.