I traveled to the incredible Xel-Há water park near Tulum mid-COVID—here’s what it was like.

eated on a recumbent bicycle that’s hanging from a cable inside a cave, bats are the farthest thing from my mind. Instead, I pedal furiously toward the sliver of light beyond the cavern walls, never looking up to see the black shapes dangling above. The zip bike obliges, and I soon wobble into the green glow of the jungle, high in the rainforest canopy.

Instead of gliding effortlessly above suburban California, though, I’m cycling in fits and starts over jade green cenotes and dense mangrove forests at Xel-Há park near Tulum, Mexico. Like single chairlifts with pedals, the yellow contraptions are spaced apart on an elevated cable circuit that takes about 20 to 30 minutes to complete depending on how fast you pump your legs. My teenage daughter and her friend are behind me, taking the time to spot the bats I’ve missed.

Viewing the Yucatan’s maze of eroded limestone gullies and sinkholes by zip bike is but one adventure activity at Xel-Há, an all-inclusive marine theme park. After the ride, we’ll explore a Mayan cave, cross a floating bridge, and search for endangered manatees. It’s like a real-life episode of Dora the Explorer. 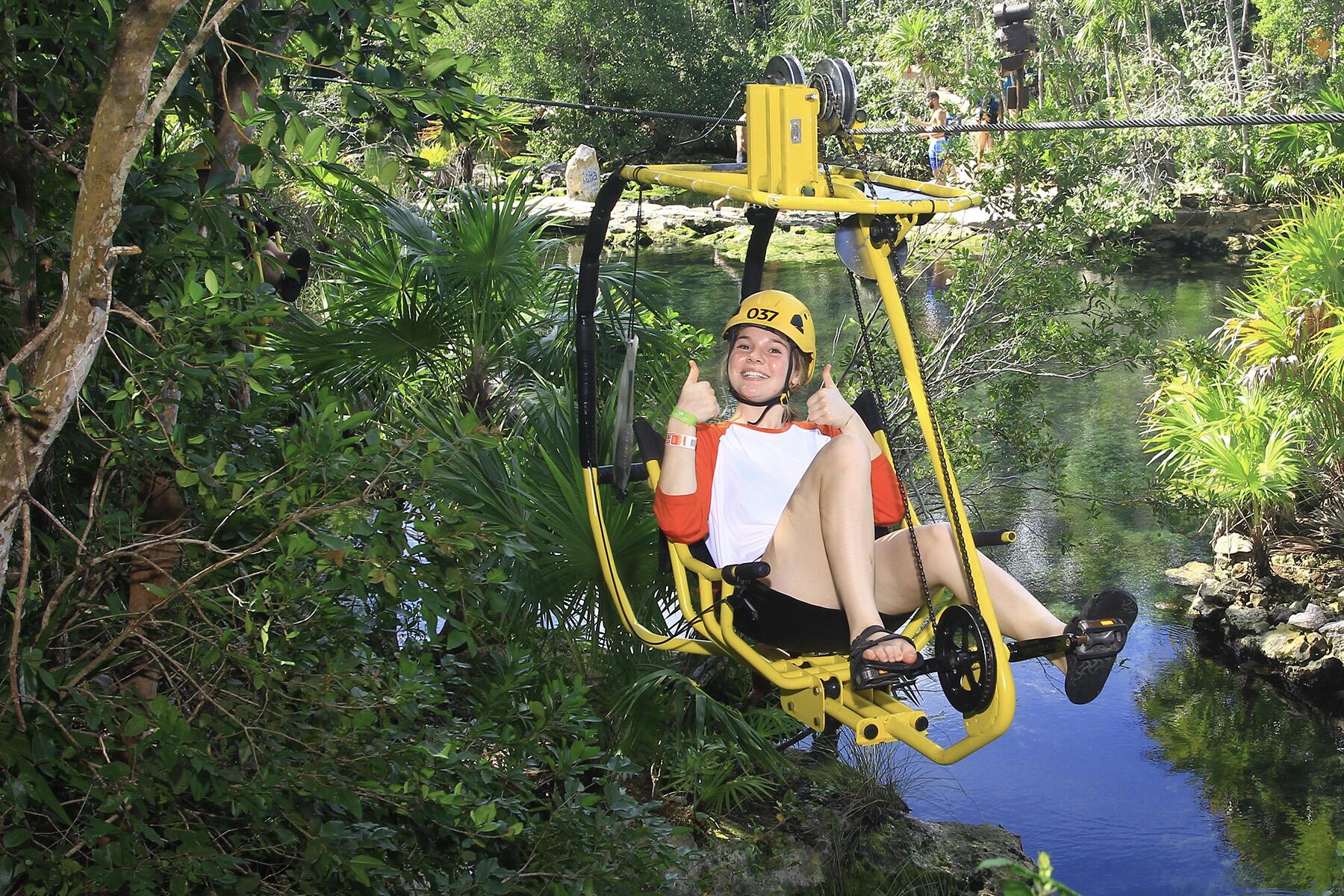 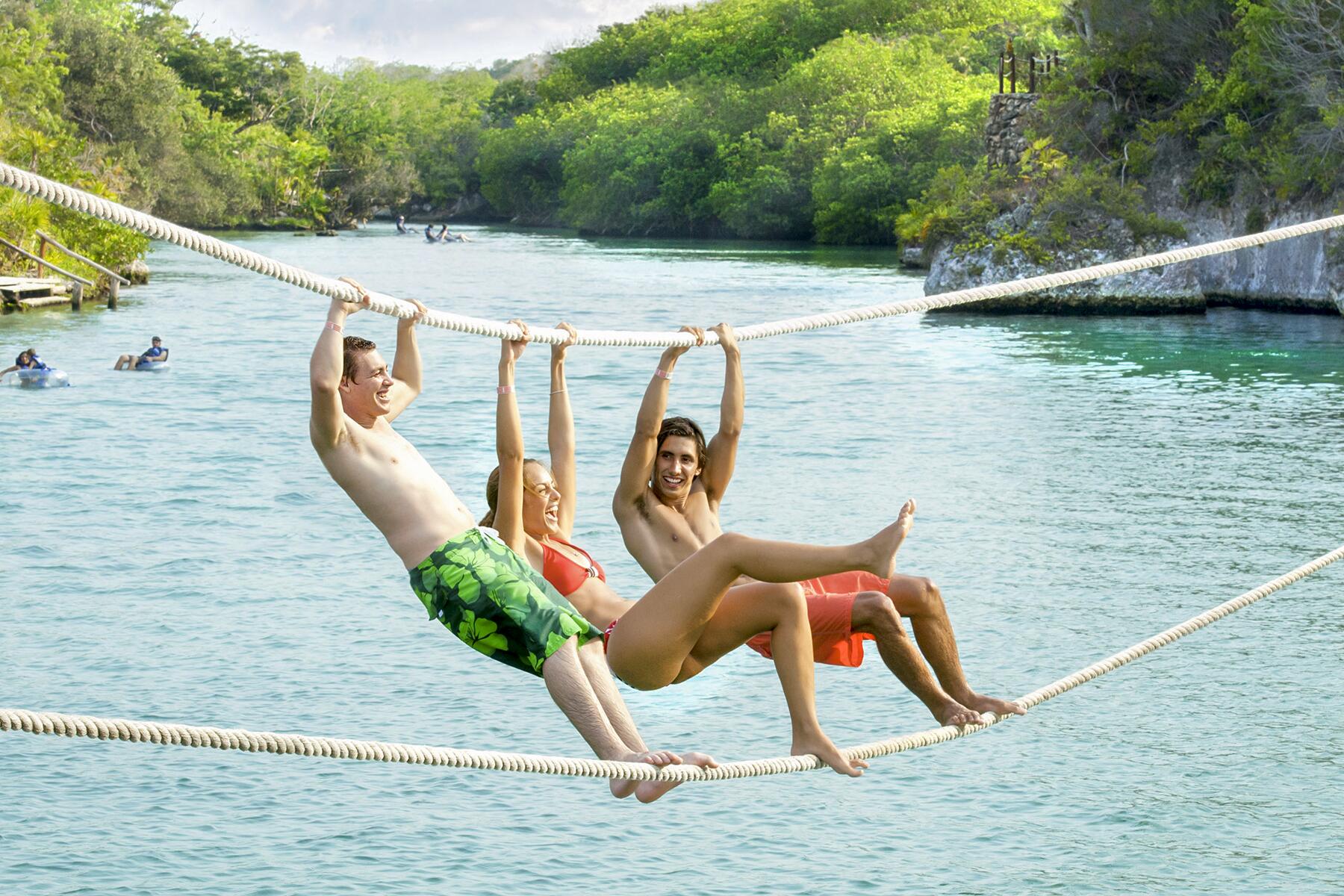 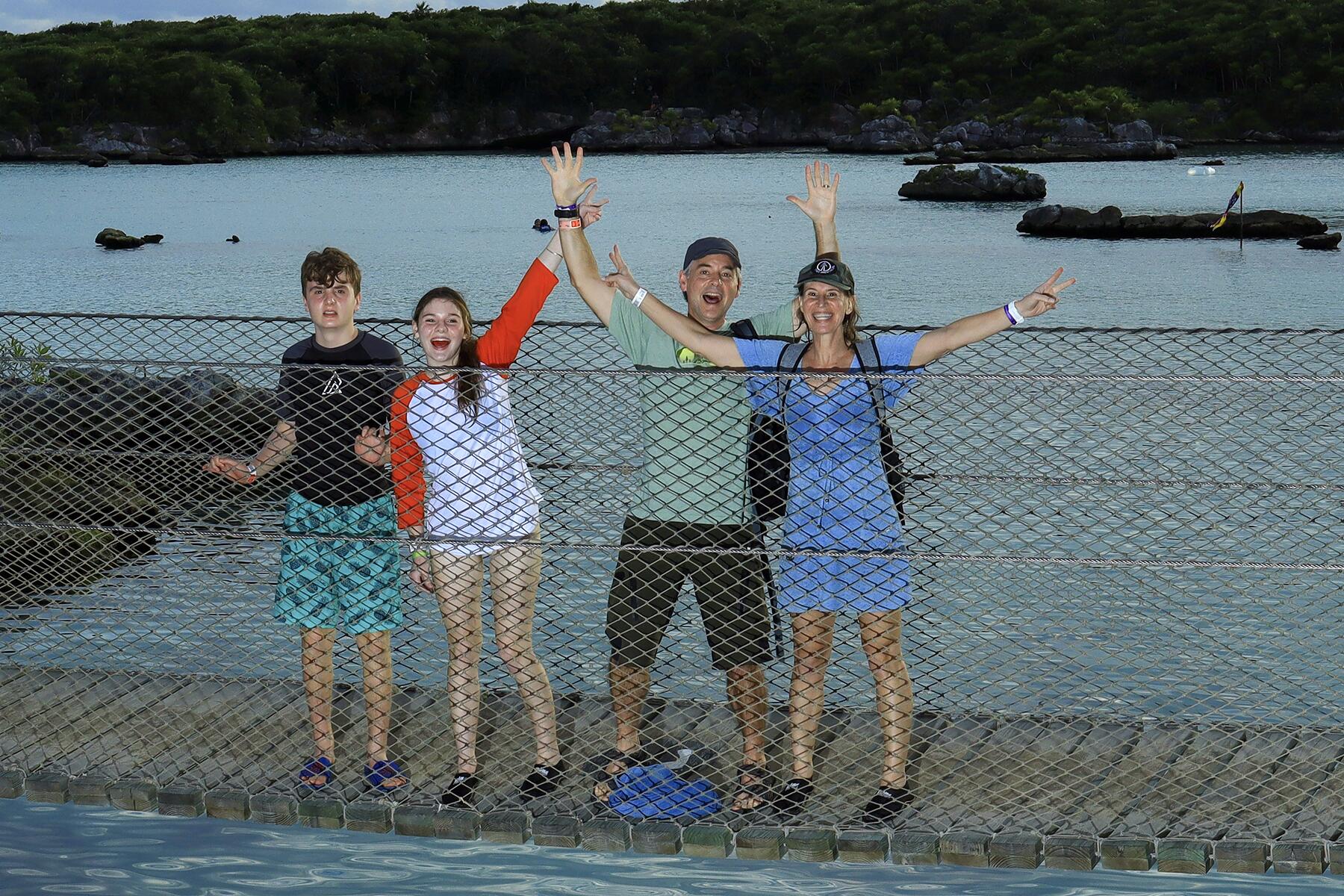 What Is Xel-há, Anyway?

“Think of a natural Disneyland, but with free food and drinks,” a friend explained after visiting Xel-Há with her family a few years ago.

I admit I’d been curious about the park for years. You can’t visit the Mayan Riviera without hearing about Xel-Há, Xcaret, Xenotes, or another park, tour, or hotel that starts with the letter X—pronounced “Sh” or “Ish’ in the Mayan language (so, “Shell-Ha”). There are billboards and signs promoting the parks all along Hwy. 307 between Cancun and Tulum, and most hotels sell day tours that include transportation.

Grupo Xcaret, the company that operates the eight parks and three hotels in the area, seems to have a monopoly on family fun in these parts. Xel-Há, whose name means “where water is born,” bills itself as both a natural wonder and a theme park, two concepts that seem diametrically opposed. Imagine if the Grand Canyon set up a zipline circuit from the rim to the Colorado River, then threw in white-water rafting and cliff jumping, followed by beer and tacos, and you kind of get the idea, though on a much smaller scale.

The 207-acre park is built around a large natural inlet that was a sheltered harbor and Mayan port city in pre-Columbian times. The shallow, turquoise water teems with tropical fish, including angelfish, damselfish, parrotfish, and snapper, plus stingrays and sea turtles. Snorkeling is the top attraction.

There aren’t any rides per se—most activities are self-propelled, like the zip bikes—but the park takes advantage of its geography to offer multiple adventures under your own power. You can snorkel or swim into a cave, ride beach cruisers along a forest trail, walk winding jungle paths that lead to hidden cenotes, and float down a freshwater river on an innertube making stops to cliff jump, rope swing, or zipline into the water.

Lording above the jungle and sea is a 131-foot lighthouse observation tower that brings to mind a Mexican Matterhorn (sticking with the Disney theme here). It has four spiral water slides that maniacally swirl children and adults into a deep pool where lifeguards wait to pluck boggled participants out of the water.

Staying True to the All-Inclusive Model

Staying true to Mexico’s all-inclusive model, all Grupo Xcaret parks provide food and drinks (including alcohol), equipment for included activities, lockers to stash stuff while you swim or snorkel, and unlimited clean towels for drying off.

We start our day at the breakfast buffet, where masked and gloved staff serve everything from pancakes to papaya and deliver cups of coffee and glasses of fresh guava juice to the table (the Covid protocols are the best I’ve seen anywhere in the region). 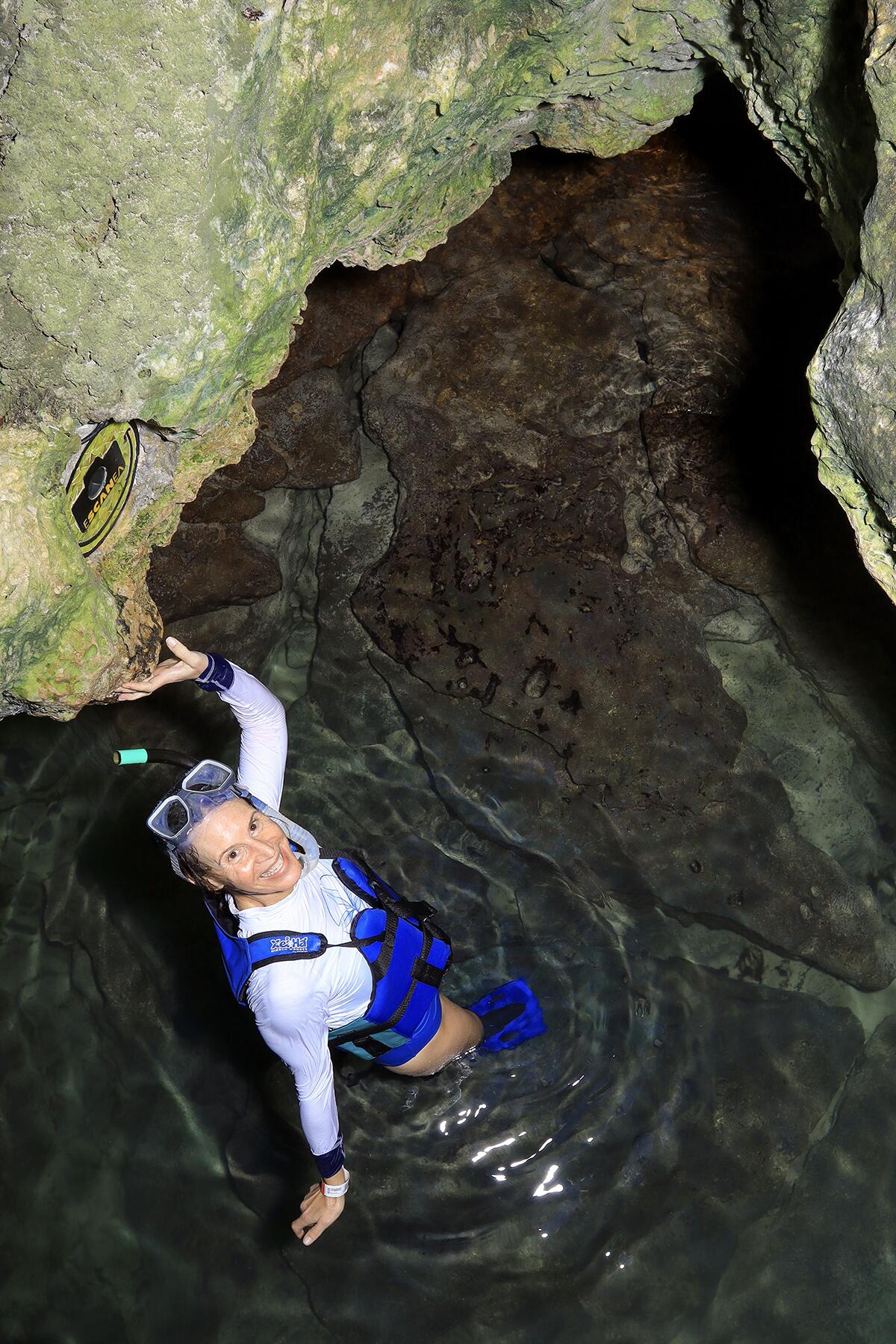 Then it’s off to the open-air lockers to stow backpacks and shoes before catching a tram to the beginning of the river. There we donned life jackets and flippers, and those who need them grab masks and snorkels. We enter the chilly fresh water and begin to kick past mangroves, occasionally bumping into someone floating the river in an innertube.

Unlike traditional theme parks, there are never any lines (except a short queue at one of the outdoor bars during the heat of the day), though the park is quite busy during the pre-Christmas week. Tables at restaurants, and palapa-covered lounge chairs with views of the harbor, are plentiful, as are garden hammocks.

There’s certainly enough to keep a family entertained for an entire day, but if you feel like doing (and spending) more, you’re encouraged to sign up for optional activities as soon as the tour bus arrives at the entrance.

Guaranteed dolphin, stingray, or manatee encounters are extra (though there’s a chance you might see stingrays and manatees while snorkeling). So are adrenaline thrills like jet boating, which is the only bonafide ride—unless you count power snorkeling, where a motor jet helps pull you through the water.

There’s even something called “fish therapy,” where tourists sit under a palapa with their feet in a fish tank while little swimmers nibble the dead skin off their heels and toes. It sounds rather appalling, but there’s a lot of laughter emanating from this station.

You can also pay more for a photo pass. This adds a barcode to your wristband that activates the many cameras set up at photogenic spots around the park. Take as many pictures as you like, then download the keepers when you return home. It comes in handy considering most water-based activities (and I didn’t think to buy a waterproof iPhone bag sold at every stall in Tulum).

I balk when all-inclusives offer a bunch of up-sells, though I can understand the need to limit numbers by charging a fee for certain activities, otherwise, there would certainly be lines. What’s more, hundreds of people swimming daily with a couple of manatees definitely doesn’t jive with the park’s sustainable model.

A Balance Between Tourism and Sustainability

We’d heard about Xel-Há’s eco-friendliness before we left for Mexico.

“You need to bring biodegradable sunscreen,” we were warned.

Friends we were traveling with searched and purchased the right kind and good thing, too. No sooner was I slathering on lotion under the bored gaze of a basking iguana, when a lifeguard approached to make sure I wasn’t about to pollute the lagoon with oxybenzone.

In addition to striving to keep the water clean and fish-friendly, the park is involved with a number of local environmental programs, including coral conservation, a sea turtle hatchling release on its beaches, and a queen conch conservation program inside the inlet. Xel-Há also reforests native plant species and runs an environmental education program with local schools.

It’s impressive how, apart from the lighthouse, the park blends with its natural surroundings. In some spots, palm fronds sway across pathways or the trail parts around a tree that was saved instead of cut down and paved over. And there’s not a disposable plastic beer cup in sight. There are, however, disposable snorkels, presumably because of Covid (snorkel masks are reused), which guests are encouraged to bring home with them.

At the end of the day, we all agree Xel-Há has exceeded our expectations. The park’s river, inlet, and surrounding rainforest are accessible without being overly sanitized or kitschy (no cartoon mascots here). I love how there are iguanas everywhere. Scarlet macaws flying over the lagoon are a common sight, too.

The company’s parks and tours really make it easy to immerse yourself in the Mayan Riviera’s unique landscape and culture. In two days, we’ll join their Xenotes Tour and zipline and rappel into a few of the limestone sinkholes that riddle the Yucatan Peninsula while learning about the caves’ importance to the Mayans. I understand why I avoided Mexico’s X parks before I had kids—they seemed touristy and too expensive for my backpacking budget—but with teens in tow, they definitely deliver holiday highlights.