Heroes, bears, and kid eaters—these are the legends behind Bern's most elaborate fountains.

Bern, Switzerland is lined by dozens of public fountains that, via their elaborate and sometimes bizarre designs, reveal aspects of this city’s heritage. You know, just your average children being devoured, bears wearing golden helmets, musicians in motion, soldiers wielding crossbows, and heroines saving the people.

Dating back to the 1500s, these Renaissance-era structures range from horrifying, inspiring, or comical and have become central attractions of Bern, which is known as the “City of Fountains.” Here’s the story of 10 of Bern’s most interesting fountains.

Looming above Kornhausplatz, one of the busiest public squares in Bern, is a truly disturbing sight. There, atop a fountain, is a ghoulish man with his mouth wide open, biting down on the head of a tiny, naked child. In his arms, he grips several similarly small toddlers, which he presumably intends to eat, too. There is no consensus on the intended meaning of this confronting sculpture. The most popular theory is that it’s a character from an urban legend designed to scare children into good behavior.

Looming above Kornhausplatz, one of the busiest public squares in Bern, is a truly disturbing sight. There, atop a fountain, is a ghoulish man with his mouth wide open, biting down on the head of a tiny, naked child. In his arms, he grips several similarly small toddlers, which he presumably intends to eat, too. There is no consensus on the intended meaning of this confronting sculpture. The most popular theory is that it’s a character from an urban legend designed to scare children into good behavior.

The graceful woman pouring a jug of water atop this fountain is one of the greatest heroines in Bern’s history. It is a likeness of Anna Seiler, a philanthropic lady who helped create the city’s first hospital in the 1300s. She wasn’t alive to see this dream come to fruition, as it was in her will that Seiler left a large sum of money which she stated should be used to build a medical facility.

Wearing a long, gilded robe and holding the Tablets of Law, a bearded man cuts an intimidating figure on this fountain. He is Moses, the Hebrew prophet and leader who led his people out of Egyptian slavery in the 13th century BC and later had the Ten Commandments revealed to him by God while he stood on Mount Sinai. This statue, sculpted by Nikolaus Sporrer from Konstanz, keeps company with the magnificent Cathedral of Bern.

Another hero from the Bible adorns a fountain opposite Einsteinhaus, now a museum and formerly the apartment where Albert Einstein lived from 1903 to 1905 and reportedly got his inspiration for the Theory of Relativity. This statue shows Samson, decked out in Roman uniform, holding a growling lion’s mouth wide open with nothing but his bare hands. It was intended to reflect not just Samson’s strength but that of the community of Bern.

Wearing a helmet and clutching a sword, a dashing soldier looks out across a cobblestone square to the graceful Bern Town Hall and adjacent Church of St Peter and St Paul. He holds the flag of Bern, a red and yellow design decorated by a black bear with its tongue extended. This man was a Venner, the title given to powerful military leaders in medieval Switzerland. This particular statue was damaged during the French invasion of 1798 and was moved several times before finding a permanent home here. 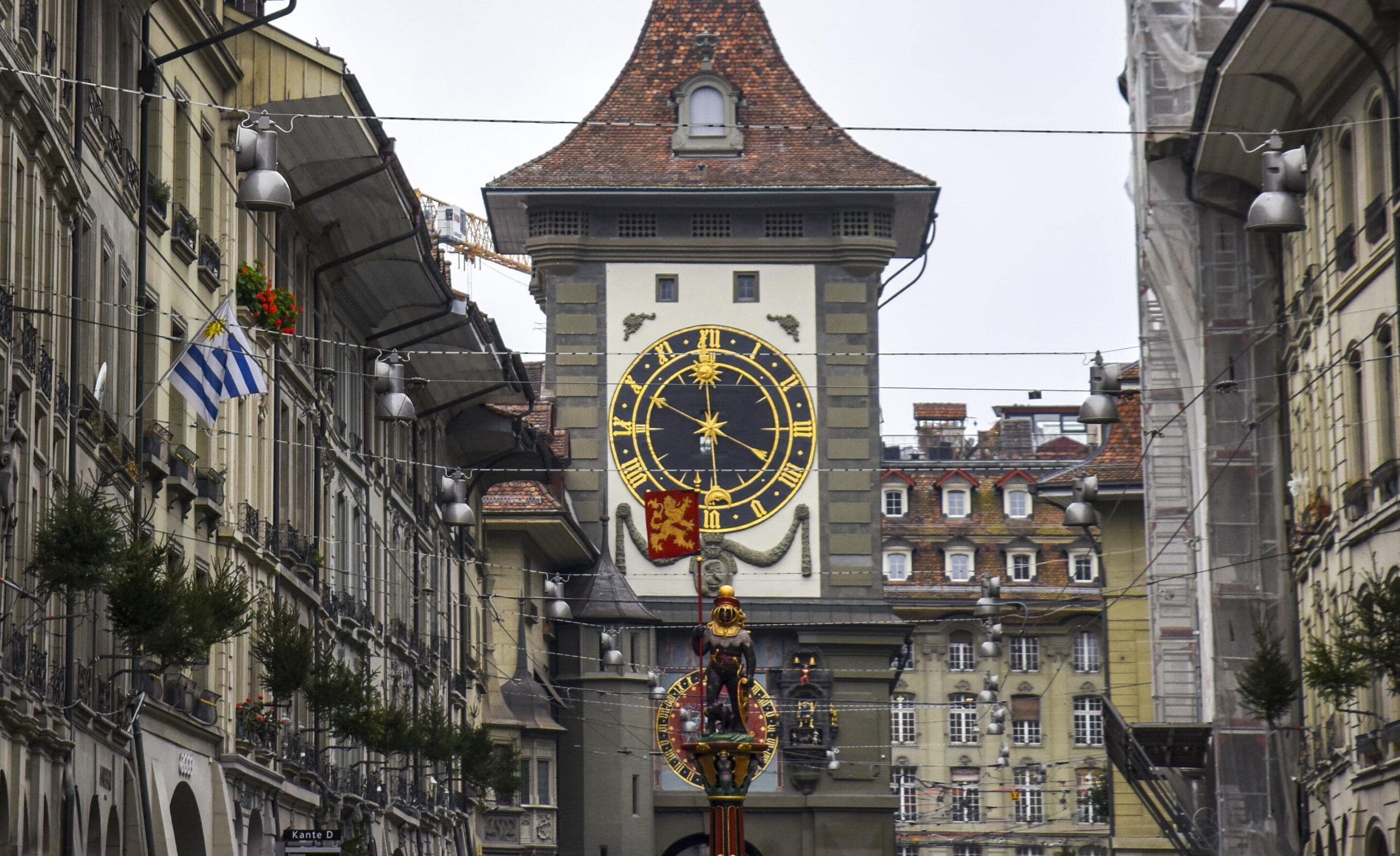 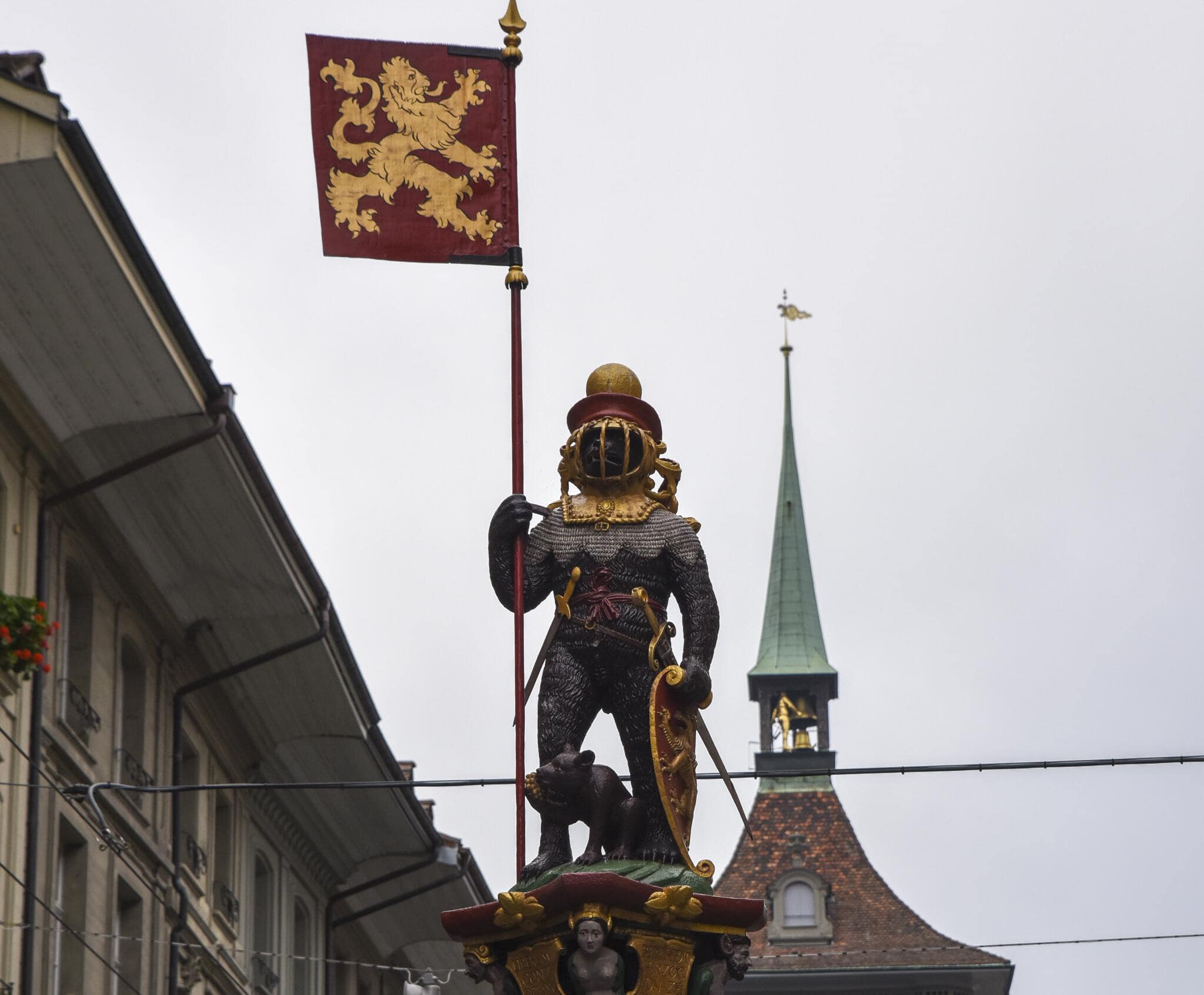 In a country renowned for its timepieces, no clock is more famous than the magnificent, 54m-tall Zytglogge, which towers over downtown Bern and is the city’s top tourist attraction. In its shadow, on the elegant Kramgrasse thoroughfare, sits Zahringerbrunnen, an unusual landmark that depicts a fierce black bear wearing an ostentatious red helmet smothered in gold. Decked out with two swords and a shield, it is ready to charge into battle, while alongside its feet is a bear cub, nibbling on grapes. The black bear has long been a symbol of Bern.

The entire Old City of Bern, a network of stone streets embellished by attractive limestone buildings, medieval arcades, and glorious churches, is one big UNESCO World Heritage Site. Its key thoroughfare is Kramgasse, a splendid street lined by Swiss and Bern flags, in the middle of which sits Kreuzgassbrunnen. Unlike many of Bern’s other fountains, this one has no curious back story. It is just a handsome, obelisk-style monument that still provides running water to passersby.

Home to the impressive Swiss Shooting Museum, Bern has a long and storied connection to marksmanship. In the 1400s, when the Old Zurich War and the Burgundian Wars created havoc, the men of Bern were famous for their proficiency with crossbows, in particular. There were several prestigious shooting societies in the city, where men went to sharpen their skills. This fountain honors that history, showing a soldier draped in armor holding a banner of the Society of Musketry. At his feet, a bear cub wields one of those same firearms.

Also tapping into this proud history of marksmanship is Ryfflibrunnen, which shows a bearded soldier with a crossbow slung over his shoulder. The myth goes that this warrior, known as Ryffli, was the greatest marksman of his time and that it was he who shot dead Jordan III of Burgistein during the Battle of Laupen in 1339. Following a common theme in these fountains, he is partnered with a bear cub. The fountain has a prominent position on Aarbergergasse, a busy street at the western end of Bern Old City.

Nestled in Bern’s Old City, the Berner Puppentheater is a key tourist attraction that, from October to May, has a marionette, stick puppet, hand puppet, and shadow puppet stage shows. Just outside its entrance stands Lady Justice, her vision blocked by a blindfold, as she grips a sword in one hand and the scales of justice in the other. Beneath her are the busts of an emperor and a pope. This statue stands here to symbolize the Bern peoples’ strong belief in a rule of law.

At the eastern end of Bern’s Old City, tourists can get wonderful views across the Aare River to the forested slopes opposite and the adjacent and impressive Untertorbrücke stone arched bridge. One of the most scenic spots in one of Europe’s prettiest cities, this is also the perch of Läuferbrunnen. This decorative fountain depicts a medieval messenger, who in the 1500s would have had the crucial role of carrying notes between leaders. If he was caught by a foe, the message would never be delivered, and plans could go awry. Now he stands still on Messenger Square.

A unique woodwind instrument, the bagpipes are widely associated with Scotland, where they are the national instrument and remain a common part of major events. What is lesser known is that Switzerland, too, has deep links to the bagpipes, called the Schweizer Sackpfeife, which were popular for centuries up until the 1700s. This fountain pays homage to that history. Its centerpiece is a man blowing cheerily on a gilded bagpipe as a goose stands by his side. This upbeat sculpture is a symbol of Bern’s love of live music and frivolity. FWIW, Basel has an equally varied selection of fountains -- plus some that double as unofficial swimming pools on really hot days (for those who don't feel like a plunge into the Rhine).