This Neolithic site predates Stonehenge and the pyramids of Giza, but it was only discovered (relatively) recently.

The story of Skara Brae starts long after its end and—as is befitting such a curiosity—with a storm.

In 1850, Scotland was battered by a horrific and fatal storm. By the time it was over, 200 people had died. But when the tempest subsided, something unusual and ancient had emerged from the earth on the coast of mainland Orkney.

The force of the high tides and strong winds had stripped away part of a knoll and unveiled the ruins of several small, roofless houses close to the shore of Bay o’ Skaill. Though there was an initial amateur effort to excavate the site, it was ultimately abandoned in 1868 and remained untouched until 1925 when the structures were damaged by another storm. As efforts were made to construct a sea wall intended to protect them from further damage, even more structures were uncovered.

The homes were all consistent in design, with each featuring a single, central room with a fireplace with beds on either side. 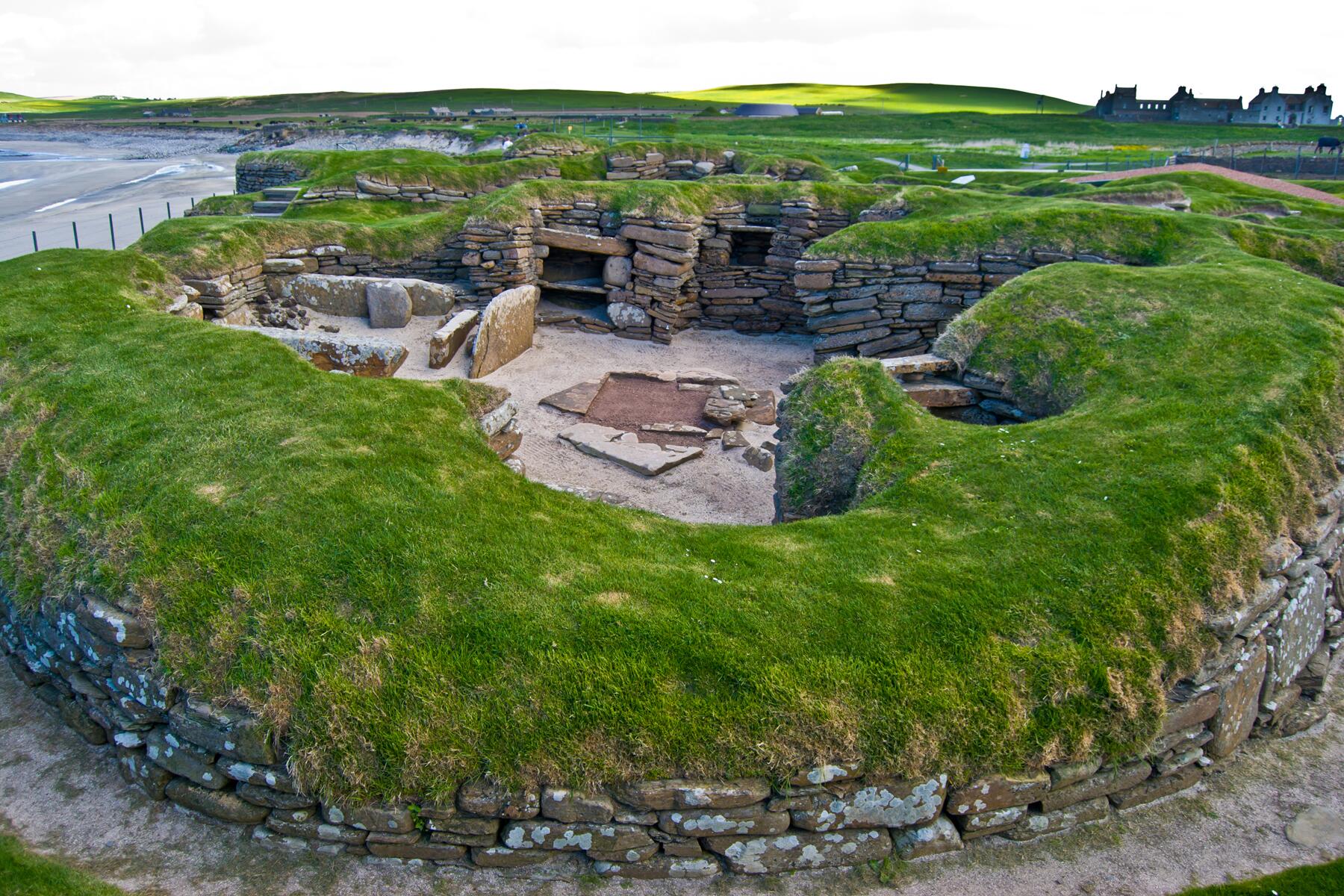 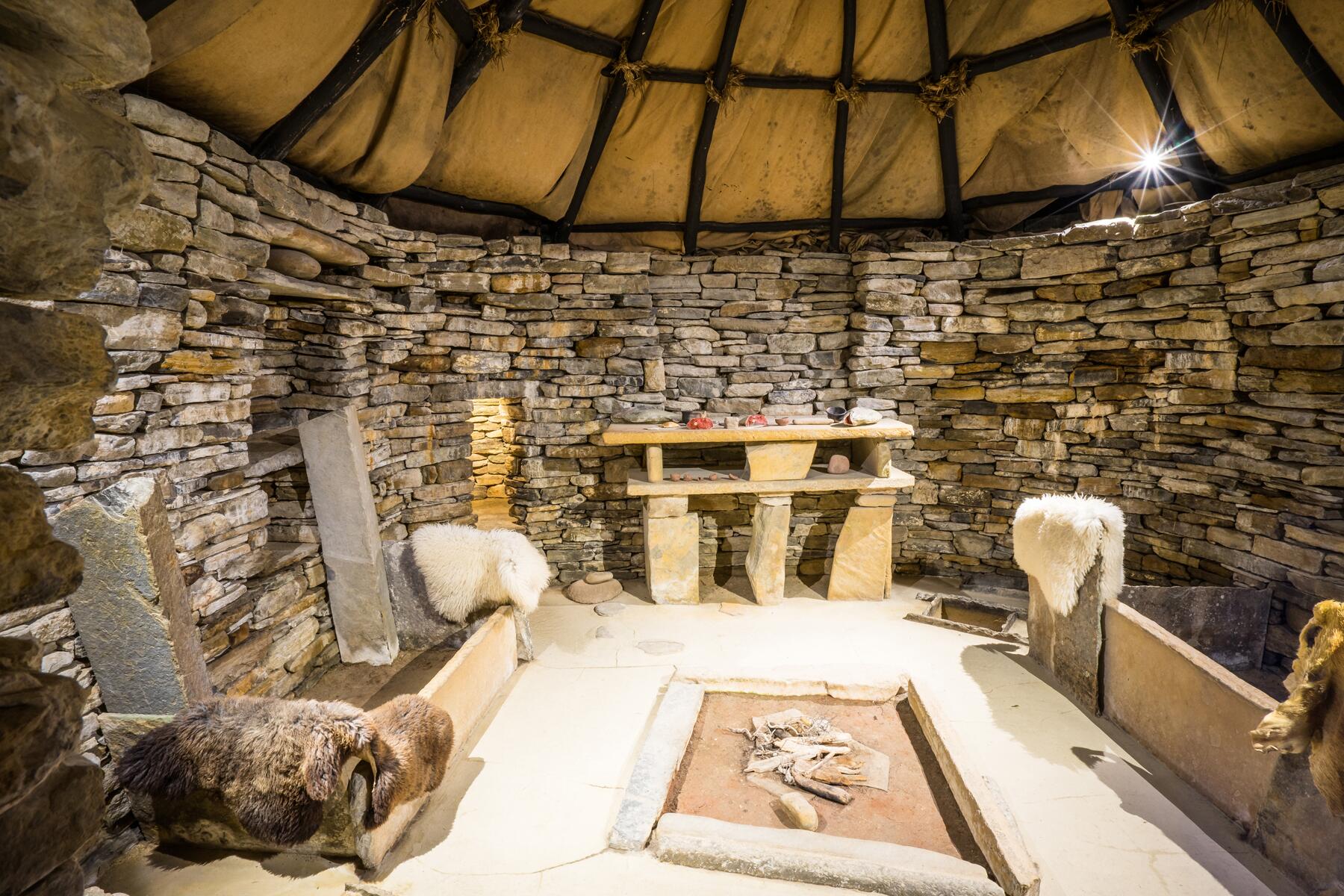 It was initially believed that the houses had been occupied by people during the Iron Age. But as radiocarbon dating emerged in the 1970s, evidence suggested that the site was much, much older. It was determined that Skara Brae’s earliest residents settled in 3180 B.C. and continued to call the coast of mainland Orkney home for 600 years, placing it in the Neolithic Age.

Besides its age, there was something else remarkable about Skara Brae. The artifacts that were found throughout the settlement were incredibly well-preserved despite being thousands of years old. Indeed, it is the best-preserved Neolithic human settlement in all of northern Europe. This is how Skara Brae earned its nickname “the Scottish Pompeii.” Because the artifacts were buried for so long, it allowed them to remain untouched by time or other human hands. Furniture, carved stone balls, storage boxes, shovels, knives, and beads were just a few of the items that were left behind by Skara Brae’s residents. It’s even believed that a central drainage system that led to the ocean may have been an early toilet.

But because the settlement was so well-established for so long, it begs the question, what happened to the people that lived there? Why did they abandon a place that had been occupied for 600 years? Some researchers have theorized that because so many artifacts were left behind, this implies that the human inhabitants were fleeing some kind of disaster and didn’t have time to gather up their various things. The image of people dramatically fleeing their home as destruction rains down further evokes the image of Vesuvius raining hellfire down on the citizens of Pompeii.

The most likely explanation is that Skara Brae was buried gradually over time and that its human inhabitants simply moved away as the location became less desirable. Over the centuries, the dunes had so completely swallowed the settlement that it effectively vanished until that fateful storm in 1850.

Today, Skara Brae is recognized as a UNESCO World Heritage Site and is acknowledged as a testament to the achievements of early humans. But the site is currently facing the greatest challenge in its 5,000-year history—climate change. It’s believed that when Skara Brae was originally built and inhabited, it would have been further inland. But now it’s close enough to the ocean that it’s under threat of being washed away by rising sea levels, another dramatic storm, or some combination of the two. Whether Skara Brae will continue to provide a window into the ancient past or be buried—this time for good—beneath the waves remains to be seen.