Warsaw and Krakow are knee-deep in a Soviet-style throwback.

As it grapples with rapid modernization and new disposable incomes, Poland’s younger generations are flocking to the establishments that once represented economic austerity and cultural suffocation under Communist rule. These Polish hipsters are reviving the once government-subsidized “milk bars”—canteens which served, and still serve,  cheap and hearty meals meant for all the country’s comrades: Mercedes-driving businessmen and lowly professors alike—and trendy bars that have risen from the ashes of once-Soviet historical landmarks. That Poles today have a fondness for a turbulent period whose retro, kitschy aesthetic they are eager to celebrate is an irony not lost in these reinvented haunts. Here are 12 of the best spots across Warsaw and Krakow where you can relish in this blissfully irreverent Polish trend—while it lasts. 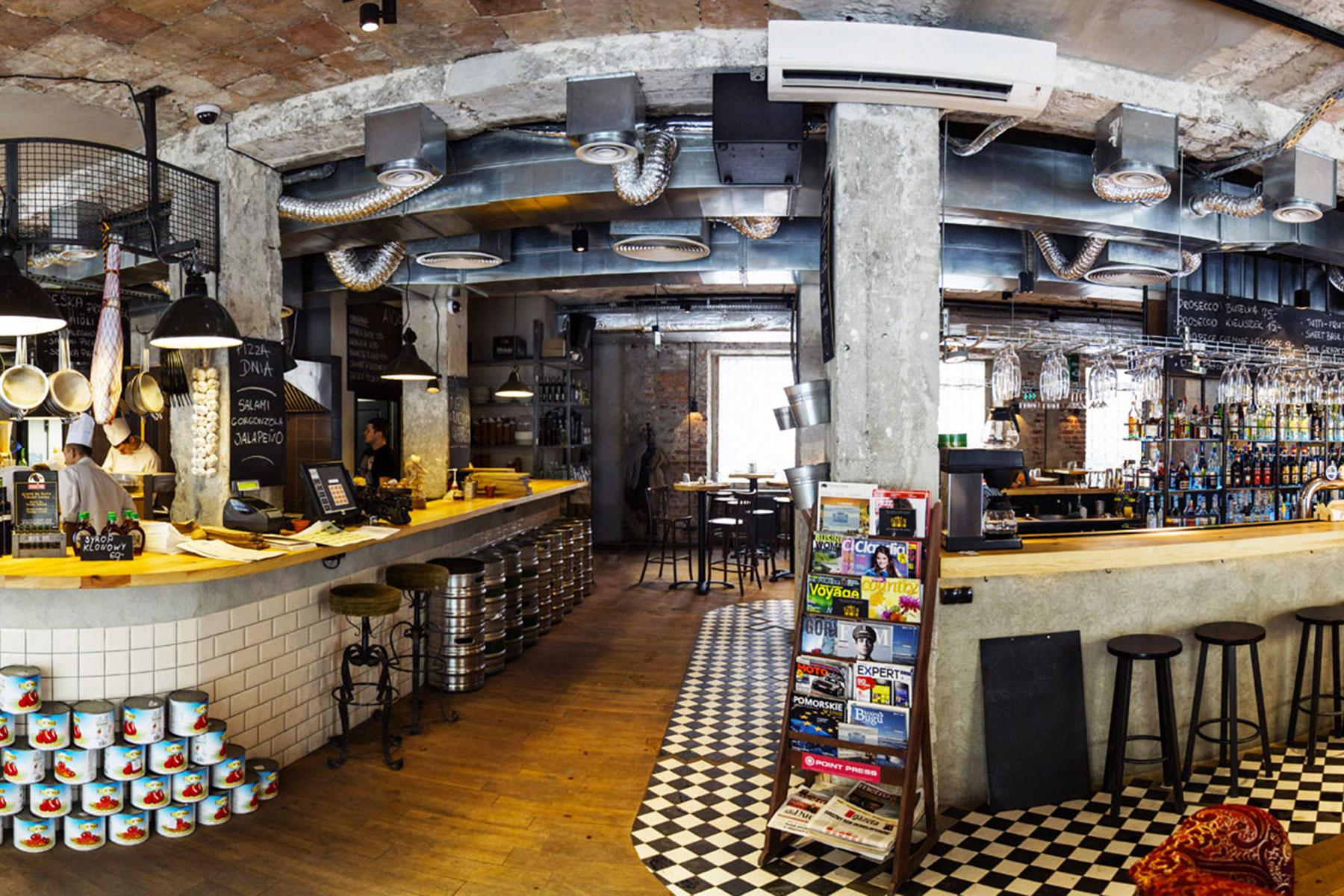 Once a Communist-era commercial space, Aioli Cafe blends local and imported ingredients for a menu that jives well with the capital’s modern, fast-paced lifestyle. Dishes like spinach pasta tossed with roasted duck and juicy figs are inspired by the rustic cuisine of Southern Poland. Aioli’s industrial-chic décor perfectly complements its view of Constitution Square, the country’s last unchanged Communist public space where Poland officially adopted the Stalinist constitution in 1952 and designated the spot as a focal point of Communist military parades. 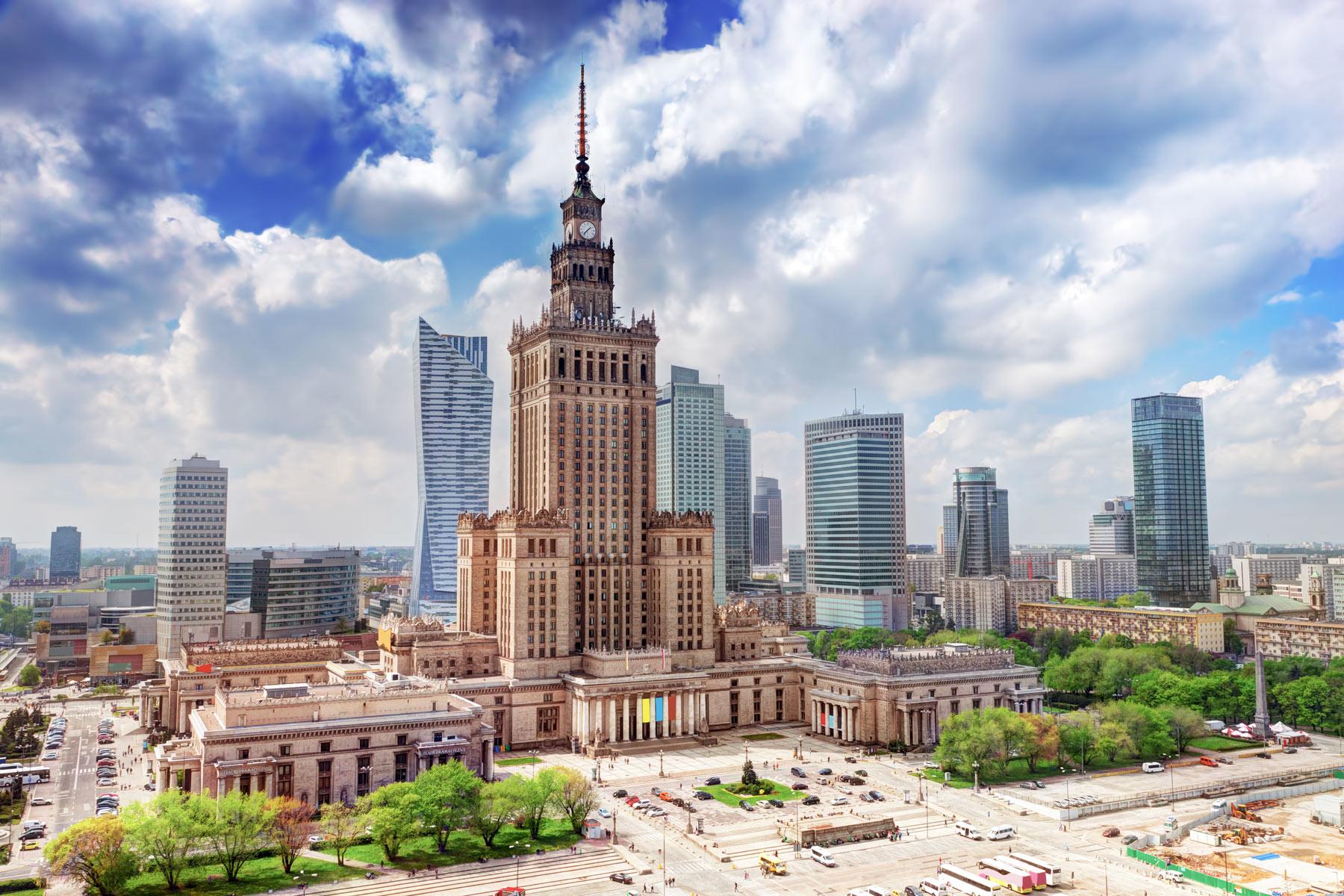 Stalin’s Palace of Culture and Science

The Palace of Culture and Science was Joseph Stalin’s gift to the city, meant to tie Warsaw architecturally, politically, and culturally to the Socialist Realist tradition of Moscow. In 1955, it was constructed to house the party headquarters but also, ironically, to resemble New York’s art-deco Empire State Building. Then, like today, the country’s most Brutalist (yet also most opulent) skyscraper is a public space and the city’s tallest icon. Warsaw’s residents debated its demolition for years but ended up only removing the Stalin plaques that once adorned the building’s colonnade, interior lobby, and one of its sculptures. Its 3,000 rooms include a swimming pool, a cinema, theaters, four museums, and a mall. Take an elevator to the 30th floor panoramic viewing terrace and spend some time contemplating the many contradictions of Soviet rule. 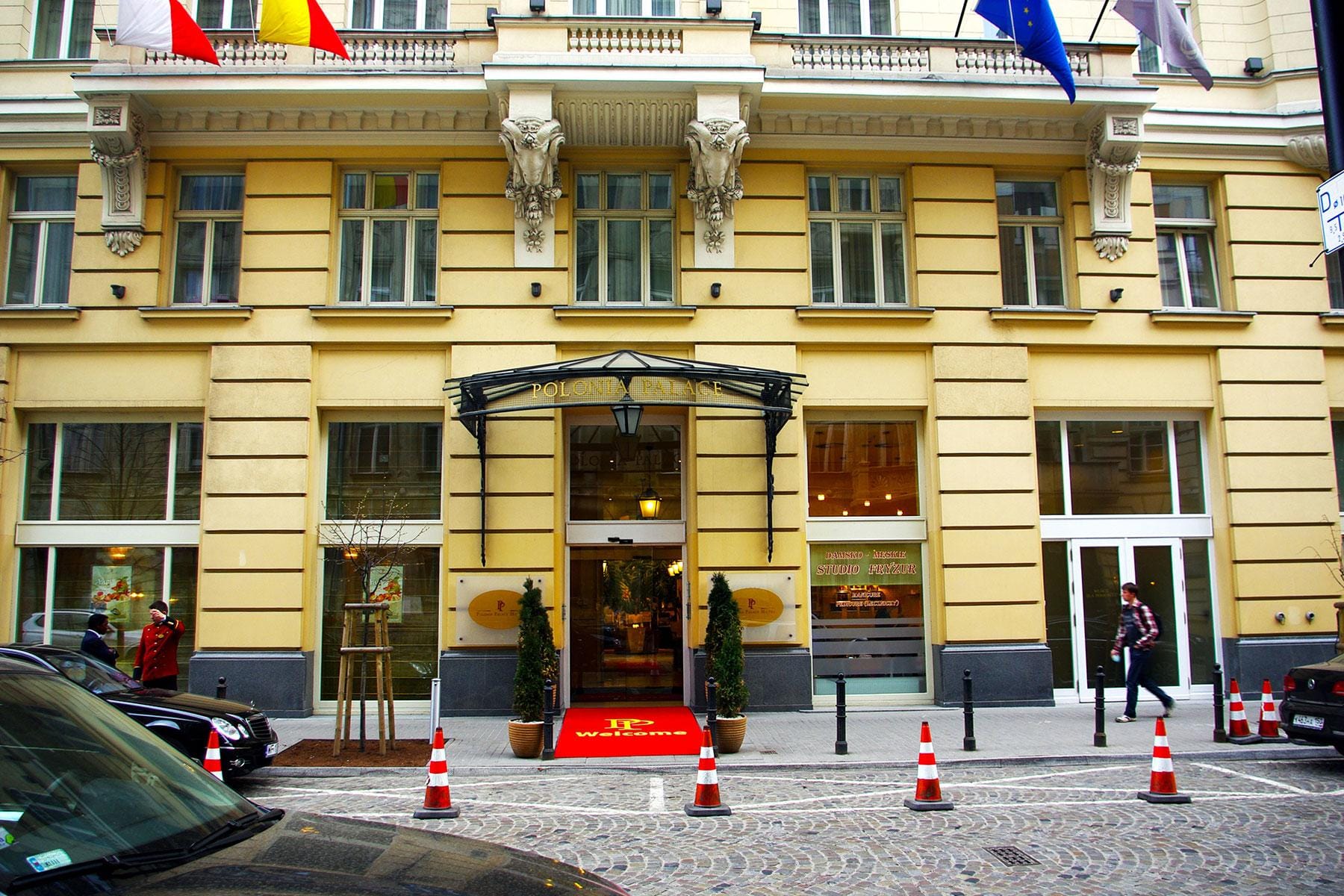 Bojangles Bar and Lounge at the Polonia Palace Hotel

Bojangles Bar and Lounge at the Polonia Palace Hotel, just across from the Palace of Culture and Science, is an unassuming bistro serving modern Polish cuisine in a hotel that has survived Warsaw’s complex, tortuous history. First constructed in 1913, it weathered through World War II, during which it functioned as an impromptu consulate for representatives from nearly 20 countries. During the Communist era, the building reopened as Hotel Polonia and was the preferred site for workers’ unions conferences and cultural events. Join the many locals who frequent this casual cafe for Polish comfort food that honors locally sourced products, like wild mushrooms in hearty dishes such as beef bourguignon, served over creamy polenta. Call ahead to check the schedules of Bojangles’ frequent live piano and jazz performances. 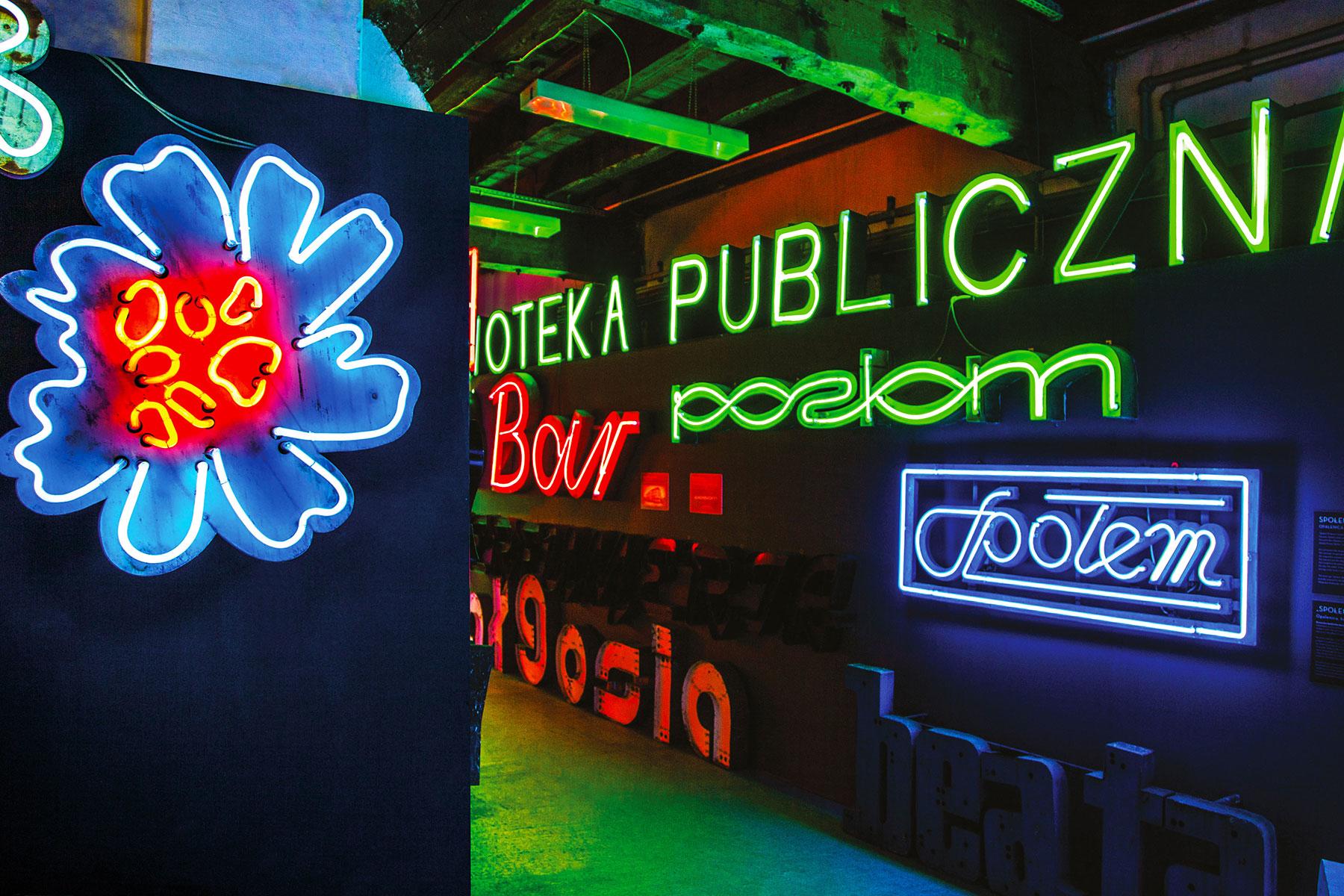 The Neon Muzeum is a contemplative commemoration of Poland’s post-Stalinist period, when an official state-ordered policy of cultural and economic relaxation meant that “neon glamor” lit up all of the former Eastern bloc. Housed in the trendy Soho Factory, a cluster of Communist-era industrial workshops that have since been reborn as art galleries, design stores, and independent cafes in the newly gentrified Praga district, get a gander at the hundreds of restaurant, train, and textile shop neon signs that dotted the streets of the Polish People’s Republic from the 1950s until the 1970s. 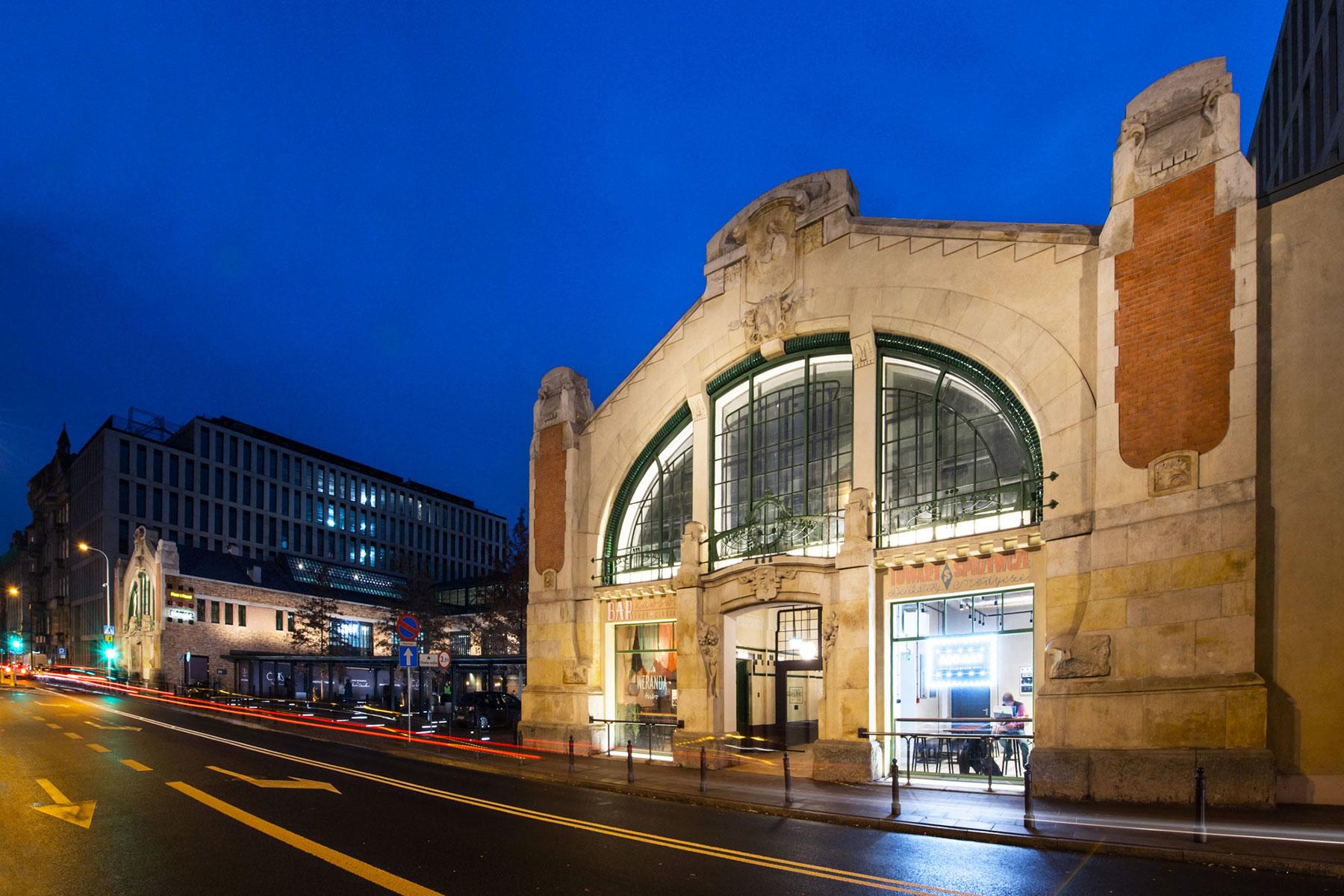 Hala Koszyki is a swank, newly converted market (or hala) offering international dishes from a variety of food stalls, as well as an art space on the second floor. Well-heeled visitors appreciate the preserved architecture of this early 20th-century covered market. There are plenty of tasty food stalls to try tapas and other small foods, but the unforgettable experience is to be found at “Warszawski Sen,” a stylish, sit-down spot where you shouldn’t miss the deer tartare with quail eggs, or the Polish traditional black pudding with apples, onions, and lentils. 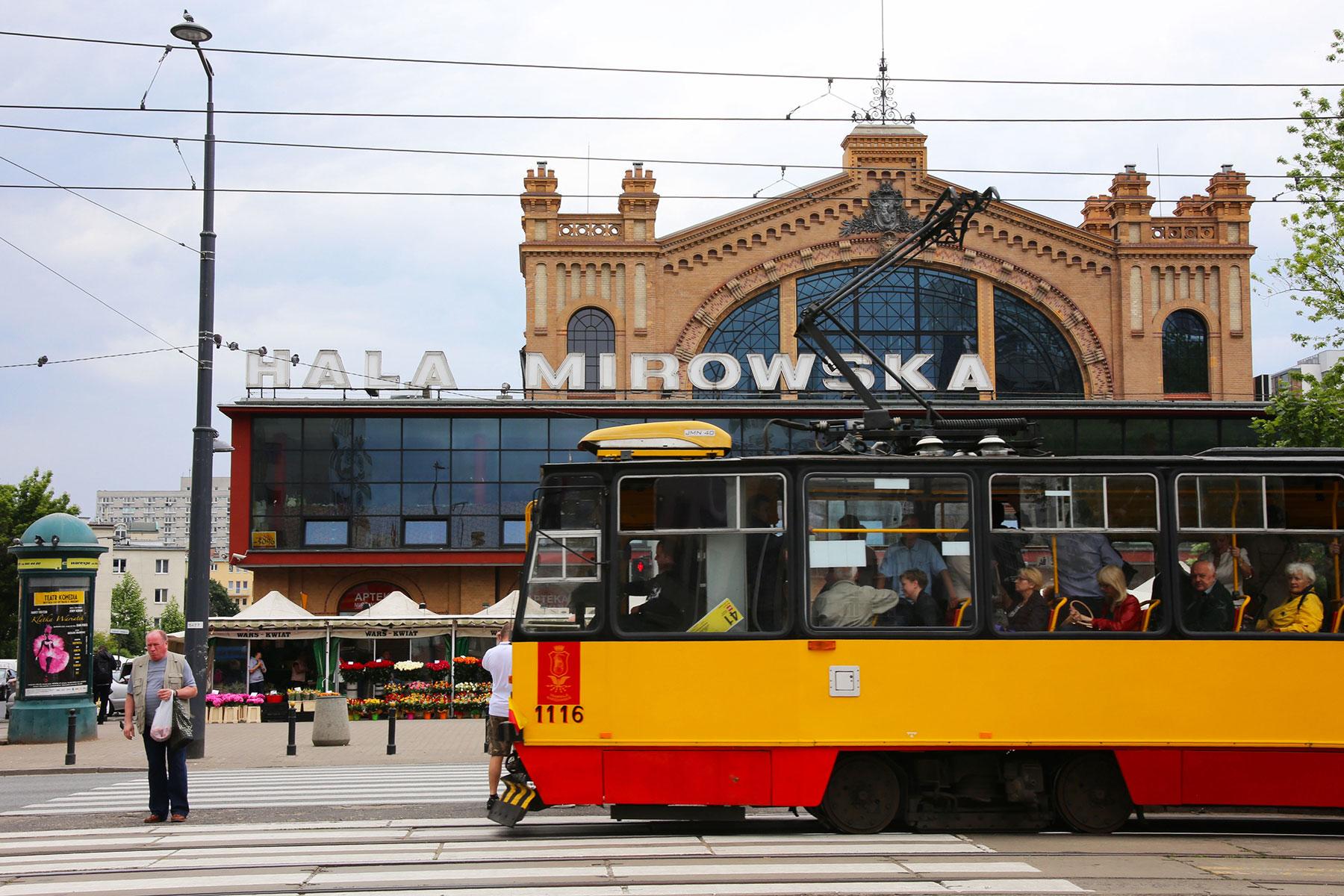 Hala Mirowska is an authentic multi-purpose food, clothes, and wares market that has survived this central neighborhood’s gentrification. It is frequented by mainly working-class, older residents of the city, but also cherished by younger Warsaw natives. It includes some of the oldest pieces of architecture in the area, dating back to 1880s. Most of the building, though, was destroyed during the Warsaw Uprising of 1944, before being rebuilt in the 1950s. From the Communist era until today, Hala Mirowska has served as a major hub for street peddlers, traders, and locals dedicated to old-fashioned notions of community. Stop by to haggle for the city’s freshest vegetables and fruits, practice your Polish vocabulary with the many saleswomen who speak very little English, and get a glimpse into the slow-paced rhythm of Poland of years past. 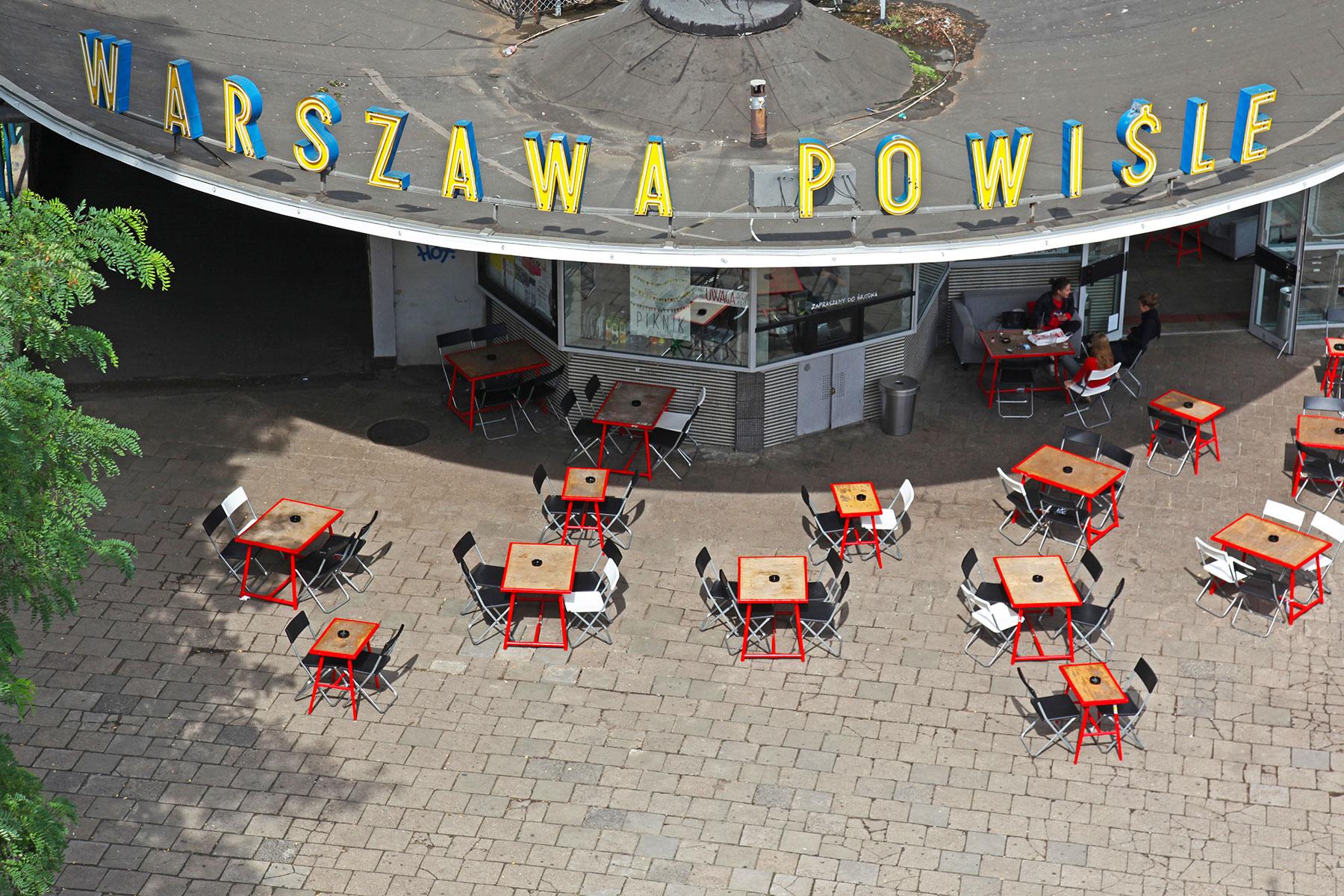 Past the Powisle train station platform and down the winding stairs, discover this trendy bar that once functioned as the Communist Polish People’s Republic train ticketing office. The mildly challenging trek is well worth this thoroughly cool, Communist throwback bar, which is topped with a circular, concrete rotunda and decorated with classically cheesy neon signage. The cheap beer, vegetarian options, all-day breakfast menu, and vast assortment of Polish street foods keep the party going well into the wee hours of the night. 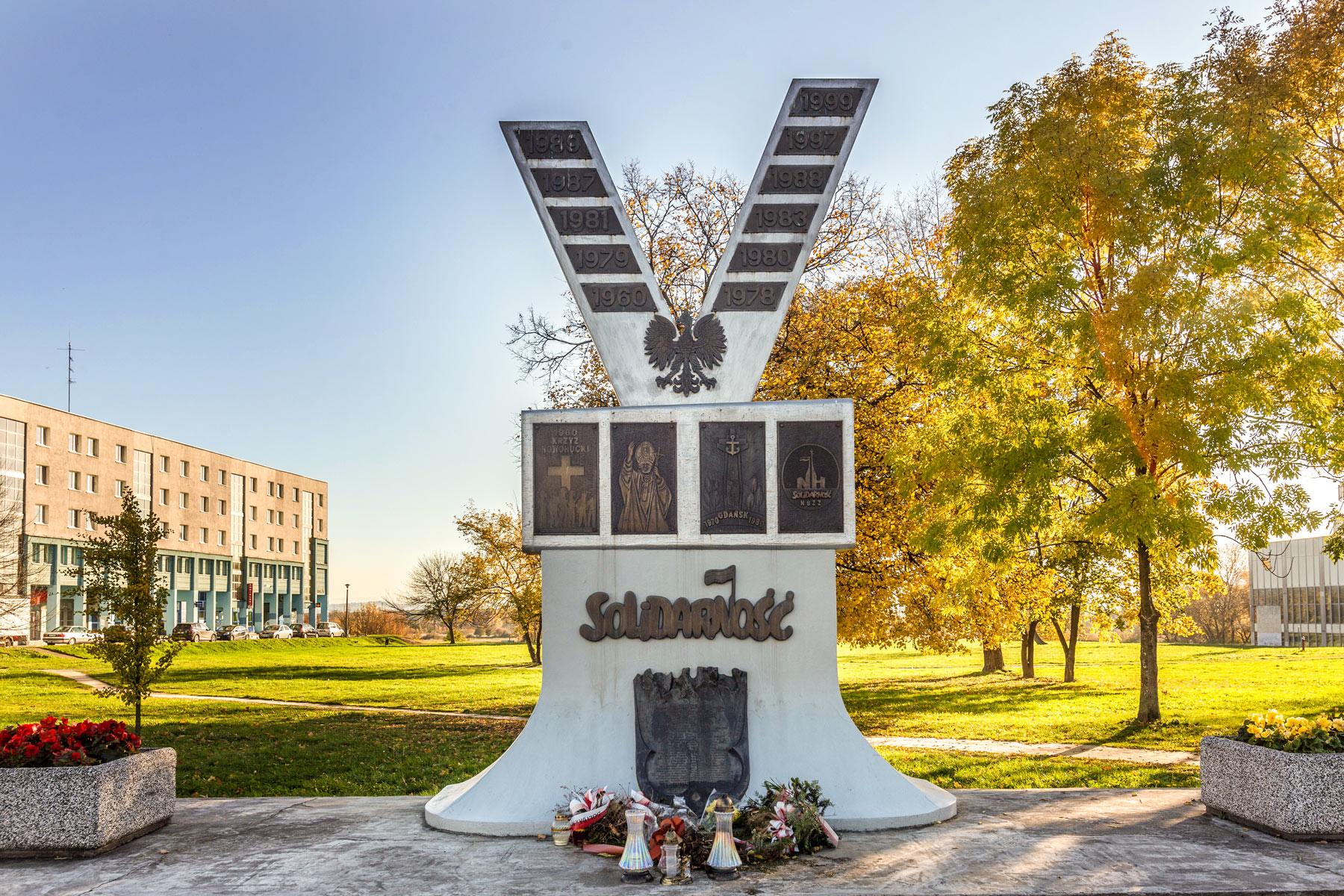 Nowa Huta is a fascinating, once-controversial planned city just outside of Krakow on the Vistula River. It was one of only two planned Socialist Realist settlements and was originally built in the 1950s according to the Versailles Palace architectural blueprint. The Communist Party praised Nowa Huta as a model proletariat utopia and in 1954 opened the Vladimir Lenin steel mill, which would employ 40,000 workers and would lead the way for several large-scale industrial factories in the area. The idealistic vision, though, didn’t pan out as planned, as many Nowa Huta residents became among the most fervent opponents to the Communist government, and demonstrated violently in the streets in the 1980s. After the Socialist government collapsed and the community underwent severe economic downturn, the area transformed into a leafy residential area, with well-built apartments and wide avenues, popular with students.  At the Nowa Huta museum in the center of town, a multimedia exhibit delves into the history of this ideological urban design project. 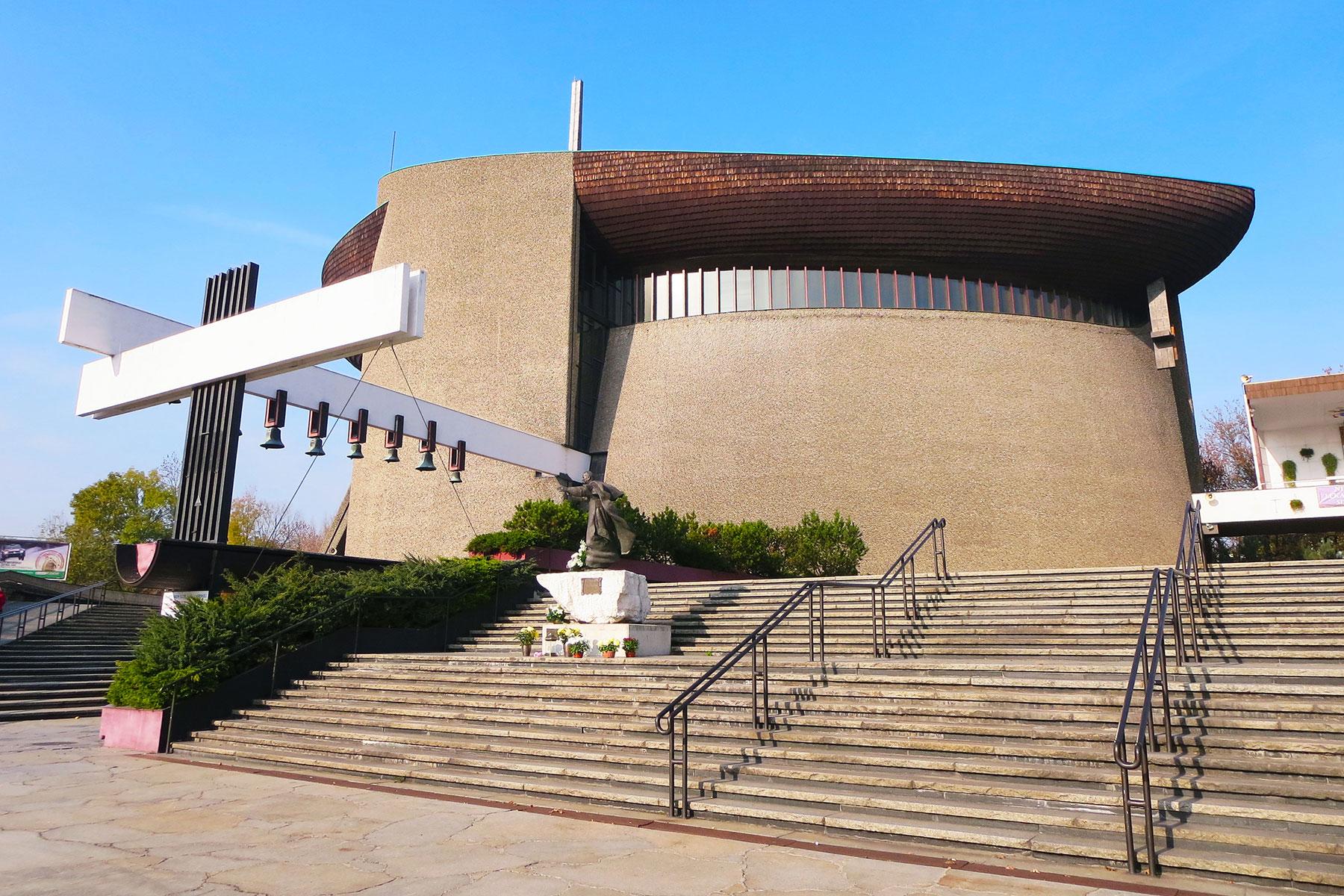 In the center of the planned city of Nowa Huta, the Lord’s Ark church was built by hand by local residents who saw Catholicism as a form of resistance to the atheist Communist regime. After residents had been denied permission to build the church for years, they clashed with the police in the streets. Ultimately, they received formal permission for the church, but no materials with which to build. And so, over the span of a decade, locals mixed their own cement, made their own bricks, and gathered two million stones to erect this dramatic Noah’s Ark-shaped structure with a 230-foot mast-shaped crucifix jutting from the middle. In 1977, it was blessed by Cardinal Karol Wojtyła, who became Pope John Paul II the following year, and it served as a refuge for the anti-communist Solidarity movement in the 1980s. Forum Przestrzenie is a café/bar/club (and in the winter, also an ice rink) in the shell of the once-famous 1980s Soviet-era Forum Hotel. This trippy, riverside cinderblock monstrosity was once hailed as the aspirational symbol of the Soviet future, replete with air conditioning, a digital clock displaying the temperature, and other Soviet rarities. The building was abandoned for years before this trendy bar claimed its ground floor, and a go-cart track was built on the adjacent parking lot. Go past the neon-lighted reception area and head for the open air bean bag seatings and retro sofas, where you can while away the night over sausage platters and local beers. Pop into the basement music venue, known as Klub 89, to catch a raging DJ party or one of the other frequent special events.