Amsterdam really has something for everyone, and one (or more) of these 11 super-fun annual events is sure to earn a place on your itinerary.

The capital of the Netherlands is known for its laid-back, anything-goes style, and that’s reflected in the variety of festivals that Amsterdam puts on every year. Music events run the gamut from the electronica-driven Amsterdam Dance Event to the classical Grachtenfestival to the internationally-minded Holland Festival. Curiosity seekers can peek behind the canal houses on Open Garden Days and Open Monuments Day, while the Amsterdam Pride Canal Parade and the Amsterdam Light Festival take advantage of the famed waterways. Last but certainly not least, Amsterdam’s biggest festival of all, King’s Day, brings the entire city out to the canals and streets, all decked out in Dutch orange. We’ve listed 11 of the best Amsterdam festivals in chronological order to make it a breeze to fill up your calendar for the year.

Museums not only in Amsterdam but throughout the Netherlands hold special events for a week every April during National Museum Week. More than 300 Dutch museums offer activities including workshops, guided tours, musical performances, and lectures. There are often interactive events geared toward children, too. 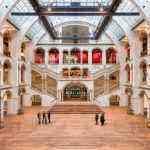 Amsterdam’s biggest party of the year, called King’s Day, takes place on April 27, when the entire city dons orange—in honor of the Dutch Royal Family, descended from the House of Orange-Nassau—and takes to the streets to celebrate King Willem-Alexander’s birthday. Amsterdam becomes a huge flea market, with items for sale on streets, sidewalks, and parks throughout the city, along with makeshift food and drink stalls everywhere. Begin the celebration the night before, called King’s Night when there are DJs and music in the streets. Then if you’re able, angle for an invite on a locals’ boat on the day itself, when the canals become a huge watery party venue.

For five days in late May, Westergasfabriek becomes a foodie haven when Rollende Keukens, or Rolling Kitchens, brings dozens of food trucks to the park. You can sample all sorts of cuisine, from Dutch to Thai to BBQ, at this huge outdoor “kitchen,” as well as find tasty things to drink, both alcoholic and non-alcoholic. Live music makes things even more festive. Admission to the event is free, and then you need only pay for your food and drinks. 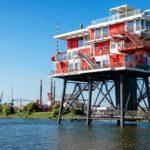 The Netherlands’ largest performing arts festival, the Holland Festival, takes place in Amsterdam every June. Performances from international artists range from theater to music to dance to opera, and there are also visual art, film, and architecture events. Holland Festival events are held all over the city, in venues including the Muziekgebouw, Westergasfabriek, the Nationale Opera & Ballet, and the Stedelijk Museum. Many of the events not in English have English subtitles, so non-Dutch speakers can take part in the fun, too.

If you’ve ever wondered what’s hidden behind some of the beautiful houses along Amsterdam’s canals, you’re in luck. On the third weekend in June, Open Garden Days lets you visit more than 25 canal house gardens not normally accessible to the public. Besides the lovely gardens, you’ll see gazebos and carriage houses, too. Buying a pass gains you access to all the gardens, plus a map detailing exactly where to find them.

Amsterdam Pride, which runs for a week from late July to early August, is one of the biggest LGBTQ parties in the world, with more than 160 events throughout the week. The week’s highlight is the Canal Parade, an enormous (and enormously fun) event, when 80 floats, often with costumed partiers, glide (and thump to the music) along the canals. The Canal Parade starts at Oosterdok and sails to Nieuwe Herengracht and the Amstel River before heading down Prinsengracht and ending at Westerdok. Arrive along the parade route early for a good spot.

This 10-day festival of classical and contemporary music, mainly featuring young musicians, takes place every August at locations along Amsterdam’s Canal Ring—some even from pontoon boats on the water itself. The Grachtenfestival includes more than 250 concerts held at 90 locations around Amsterdam, including inside homes and gardens; one of the biggest events is the Prinsengracht Concert, a free concert that happens on a pontoon in front of the Pulitzer Hotel.

For two days in mid-September, hundreds of Amsterdam buildings and monuments open their doors to visitors to explore as part of Open Monuments Day. Not only can you get a peek inside places usually not open to the public, but you’ll also find special exhibitions and musical events, as well as guided tours. You’ll even get the chance to see the interior of private canal houses, a real treat if you’re into design and architecture.

For 11 days in September, the Amsterdam Fringe Festival showcases an eclectic mix of performing arts, including theater, dance, and spoken word, at more than 30 venues across Amsterdam. Though many of the shows are performed in Dutch, about half are either in English or otherwise suitable for non-Dutch speakers.

Electronic music lovers are in heaven at the world’s biggest electronic music festival, the Amsterdam Dance Event, held over five days in mid-October. More than 2,500 artists perform at around 500 events taking place in 140 venues, including both traditional clubs and concert halls as well as museums and even the train station. Events are held both during the day and all night long, so it’s best to plan your route ahead to time to ensure you hit all the events you want.

See light installations created by artists from all over the world during the annual Amsterdam Light Festival, held from late November to mid-January. The 30 light projects are displayed throughout the center of Amsterdam, on the streets, bridges, canals, and river, and can be seen by walking, biking, or boating. The most fun way to see the artworks is with the Amsterdam Light Festival Cruise, which departs daily from Damrak Pier 5 several times an hour between 5 and 9:30 p.m.