It’s easy to get away from Venice by hopping on a boat to one of the fascinating islands just nearby.

If you’re looking for an excursion from always-bustling Venice, you’re in luck. There are more than 100 islands in the lagoon around La Serenissima. Whether you’re interested in art, scenery, wine, churches, or even historic cemeteries, you’ll find it all just a short vaporetto ride away. Here are our eight top picks for excursions from Venice and the fun, educational, and downright strange activities you can do once you get there.

The most well-known of the lagoon islands, Murano is world-famous for its glassmaking, which dates back to the 13th century. You’ll find a large selection of stores selling glass products, ranging from one-of-a-kind art and chandeliers costing thousands of dollars to ornaments, jewelry, and souvenirs that can be quite inexpensive. If you have time, stop in a glass factory to see the artisans hard at work. There are several vaporetti that you can take to reach Murano, but line 12 from Fondamente Nove is the fastest while lines 4.1 or 4.2 from San Zaccaria are slower but scenic. 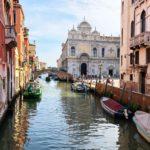 RELATED STORY
5 Ways to Get Lost in Venice (Because Seriously, You Have No Choice)

The fishing island of Burano, about 4.4 kilometers (2.7 miles) from Murano, is especially known for its brightly colored houses, said to have made it easier for fishermen to find their places in the fog. Burano has also been a center of lacemaking since the 16th century and is still a great place to buy intricate lace handicrafts, though production has dropped quite a bit over the years and Chinese knockoffs have moved in. You can learn more about the history of Burano lace at the Museo del Merletto, and if you’re looking to buy, find the real deal at Emilia Burano or Martina Vidal. Vaporetto line 12 runs from Murano to Burano, and takes about 30 minutes.

INSIDER TIPIf you’re in Burano over lunch or dinner, swing by Al Gatto Nero for some of the freshest fish on the island.

A short walk across a wooden bridge from Burano, a tiny Mazzorbo is home to some of the last vineyards in the Venetian islands. Vineyards were found throughout the islands until 1966 when most were destroyed by the acqua alta (great flood). In 1988, native Dorona di Venezia grapes that survived the flooding were replanted in Mazzorbo as part of the Venissa Estate, which you can visit for a tasting of this special wine, lunch or dinner at their osteria or Michelin-starred restaurant, or an overnight stay in their charming hotel.

The pretty island of Torcello—settled in the 5th century, even before Venice—is worth a stop as a peaceful escape from often hectic Venice, with a number of short walking trails to explore. Torcello’s main sight is the amazing Byzantine mosaics, created between the 11th and 13th centuries, within the 7th-century Basilica di Santa Maria Assunta. On the way from the vaporetto stop to the church, you’ll find the Ponte del Diavolo, or Devil’s Bridge, an ancient arched bridge without railings; it makes a terrific stop for a photo. Torcello is just a five-minute sail from Burano on vaporetto line 9.

INSIDER TIPLocanda Cipriani, an institution on Torcello and one of Hemingway’s faves, is a lovely place for lunch or to spend the night in the adjoining hotel.

Though more faded than during its 19th- and early 20th-century heyday, the Lido is the Venetian island most famous for its beaches. Its sandbar, which runs between the Venetian Lagoon and the Adriatic Sea, is about 12 kilometers (7.5 miles) long and includes both public beaches as well as private ones affiliated with hotels, where non-guests can still rent sun loungers or chairs. Murazzi, Blue Moon, and the nature reserve of Alberoni are three of the best known. The Lido gets a dose of glamor every year from late August to early September when the Venice International Film Festival is held here; it’s the oldest film festival in the world, dating from 1932. Many different vaporetti stop at the Lido, but line 1 will take you there from San Marco in about 15 minutes.

INSIDER TIPStay at the Hotel Excelsior, which has its own private stretch of sand and kids’ beach club in the summer months.

Also known as the Cemetery Island, San Michele is home to Cimitero di San Michele, a walled graveyard where Venice’s dearly departed have been laid to rest ever since a Napoleonic decree in the early 19th century that forbade burials in Venice itself. It’s a highly atmospheric place to wander amongst the 15th-century Chiesa di San Michele in Isola, one of Venice’s first Renaissance churches, and the cypress trees, as well as the contemporary cemetery extension designed by UK-based David Chipperfield Architects. Well-known inhabitants include poet Ezra Pound, composer Igor Stravinsky, and Serge Diaghilev, founder of the famed Ballets Russes. The best way to reach the island is to take vaporetto line 4.1 or 4.2 from Fondamente Nove, which takes about 5 minutes; from San Michele, you can continue on one of the same lines to Murano.

INSIDER TIPKeep in mind that San Michele is a working cemetery, so no photographs are allowed.

The island of San Giorgio Maggiore, located across St. Mark’s Basin, houses one of Venice’s finest churches, also called San Giorgio Maggiore. The original church was built in 790 and a Benedictine monastery was added in 982, but an earthquake destroyed the buildings in the 13th century. The building of the brick-and-marble church you see there today, designed by Andrea Palladio, was started in 1566. Inside, you’ll find two works by great Venetian painter Tintoretto, and the adjacent former monastery now houses the Fondazione Giorgio Cini, which includes the beautiful Longhena library as well as the “Vatican Chapels,” originally created by 10 renowned architects for the Venice Architectural Biennale and now on permanent display. Guided tours, using touchscreen videos, run every day and give you a good overview of the Foundation and the grounds. San Giorgio Maggiore is only one stop from San Zaccaria on vaporetto line 2.

INSIDER TIPTake the elevator up the campanile, dating from 1791, for amazing views back toward Venice.

Just two stops from San Zaccaria on vaporetto line 2, the (still) primarily working-class residential island of Giudecca is worth a stop to see the Chiesa del Santissimo Redentore. The church was designed by Andrea Palladio in 1577 to commemorate the 50,000 Venetians who died from the plague in 1576—about one-third of Venice’s population—and was completed in 1592, after Palladio’s death. Every year on the third weekend in July, the Festa del Redentore is celebrated by erecting a temporary pontoon bridge that connects Giudecca with the rest of Venice, and also features fireworks and other festivities.

INSIDER TIPThe Belmond Hotel Cipriani, on Giudecca’s eastern tip, has a lovely setting for  lunch or dinner, or, if you want to splurge, to spend the night.