What could be spookier and more alluring than a ghost village where the sole inhabitant is a psychic old lady on a mission to rescue her hometown and who can see the future? Welcome to Santa Chiara Sul Tirso, a tiny isolated hamlet stuck in Sardinia’s wilderness far from the madding crowds, the VIP beaches of the Emerald Coast, and the glossy yachts.

This is a no man’s land, roamed by shepherds and (in the past) bandits, where the few tourists who happen to hop by come here just to meet her, Isabella Flore, a 90-year-old super granny who has become a local hero.

Fiery, hyperactive, and very talkative, Isabella is cherishing her hometown legacy and spins tales of the good old days when factory workers lived in the village and built the nearby great dam on the pristine Lake Omodeo where a semi-flooded building juts out of the dark waters. 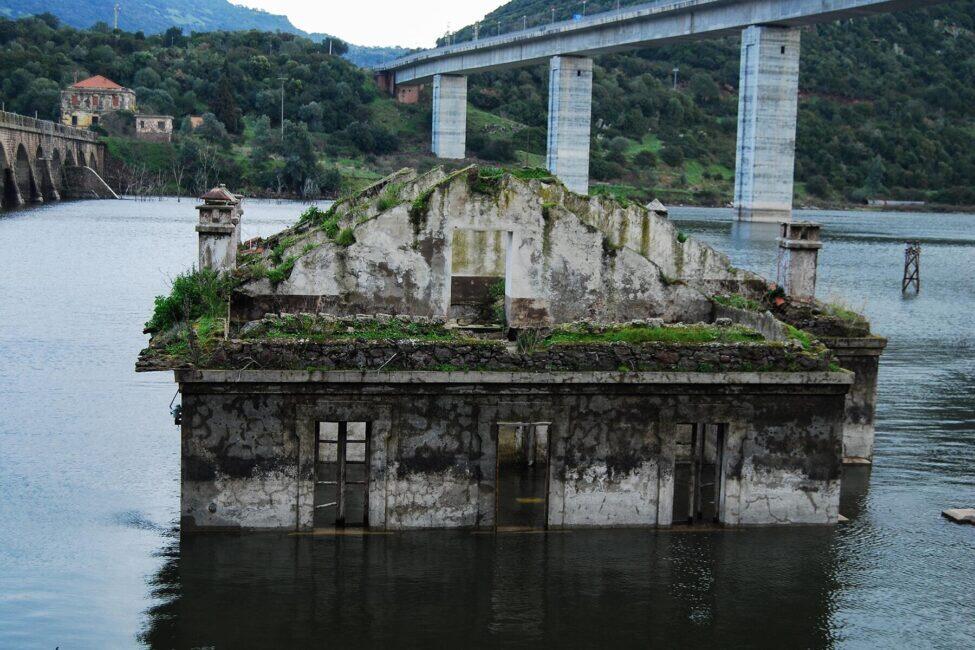 The village was abandoned decades ago when the local electric company shut down, sending families running off in search of a future elsewhere. But Isabella stayed and is now desperate to save her ghost town from the grave.

When not trying to recover the abandoned crumbling dwellings, she kills time by writing her memoirs. Isabella also just happens to have a special gift: the ability to look into the future and make prophecies. Her life is imbued with mystery and spiritualism, her inner eye is her crystal ball. Call her seer, psychic, clairvoyant, soothsayer, witch: Isabella can predict future calamities and gruesome happenings, ranging from earthquakes to homicides and kidnappings. She’s even sought out by police looking for help finding missing persons.

If you’re asking yourself: did she somehow predict the COVID-19 pandemic? The answer is: yes. It happened last year, just before the pandemic broke out in Italy, one of the first and hardest-hit countries worldwide. This time, the moment in which she was struck by the vision was so intense it wasn’t like any other she had ever experienced before.

“It was a strong emotion followed by a shattering feeling, I’ll never forget it. Usually, I get my visions during the night, they come to me as dreams and I remember them the following morning but this time it happened in full daylight. I felt dizzy and almost fainted, it was so powerful,” says Isabella. Apparently, despite the blurriness of the images, she was able to make out two white figures entering Sardinia and then collapsing to the ground. Those white figures were the first cases of virus-infected people who would have, after just a few days, landed in Sardinia bringing the virus along with them to the island-region. She tried to alert some local health officials to send-off an alert, but it was all in vain.

“This virus is terrible, we are facing an unfathomable danger. Word of mouth can help: if only information had circulated in time regarding the rise and rapid spreading of the virus, it might have been helpful. Mankind brought this tragedy on itself, and we all should have seen it coming. Only the infinite love and mercy of God can save us. Without God and prayer, there is only doom.”

“It was a strong emotion followed by a shattering feeling, I’ll never forget it. Usually, I get my visions during the night, they come to me as dreams and I remember them the following morning but this time it happened in full daylight. I felt dizzy and almost fainted, it was so powerful.”

Over the years, many people have come knocking at her door for help, mainly police investigators asking for insight into busting killers and fugitives. But also ordinary folks have come by, in search of answers.

Isabella is very religious and faith in a supreme being is what has kept her going up to this day, despite life’s trials and the tough condition of living alone in a ghost hamlet, once buzzing with life and inhabited by 30 working families. Things haven’t really changed for her since the pandemic breakout.

“I’m alone and will keep being so, I’ll never abandon this village. Luckily, a lady helps me with the grocery and food supplies. My bones ache, my body suffers and I am old.” 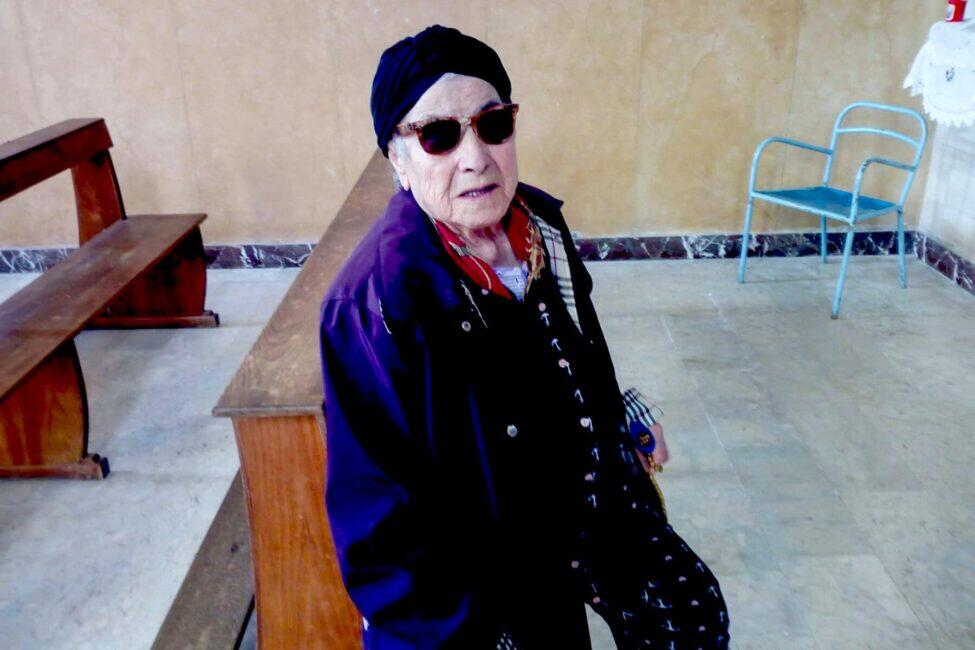 In the past few years, Isabella was able to predict a series of homicides, ships aflame in harbors, and quakes that have rocked Italy, a highly seismic country where natural calamities tend to strike pretty often. In 2016, she foresaw the earthquake that destroyed a central patch of the country, including the lovely town of Amatrice, renowned for its namesake pasta dish, all’Amatriciana.

Not many would want to know when and how they’re going to meet the Eternal Footman but it seems Isabella already knows when she will die: at 93 years of age, so in three years time, and such dark knowledge doesn’t scare her. In a recently published autobiography, the psychic—who’s actually a great-grandma with a large family—talks about her mystical life and her gift-slash-burden to see the future.

The first house at the entrance of Santa Chiara del Tirso is Isabella’s, who’s happy to welcome curious passers-by who visit, lured by the tale of the ghost town’s brave resident. A hanging sign at her doorstep reads, “Whoever comes in peace is welcome.” Her garden has olive and apricot trees where cats run about. She proudly shows visitors a small museum she has set up in one of the abandoned houses with left-behind objects of families who fled and items of the rural past. It’s stacked with old photos and traditional Sardinian costumes. Upkeeping the dilapidated village is a killer: it took her ages to clean and tidy up many of the old dwellings and she has new plans to turn one building into a center for kids and women victims of violence—a safe haven where they can feel at home.

Time stands still in the ghost hamlet. It’s a still frame of a past, lost world. Dry vegetation creeps along balconies and on rooftops, it covers benches where the elders once killed time out in the sunshine while wooden window frames are cracked open and unhinged doors are about to crumble to the ground. The old playground, where the kids of worker families hung out features a spectral rusty slide with peeling off paint. The tiny church is the only building still in decent shape, which, thanks to Isabella’s resilience, has been given a slight makeover. The priest comes to celebrate mass rarely but Isabella facilitates her own personal dialogue with God through prayers. 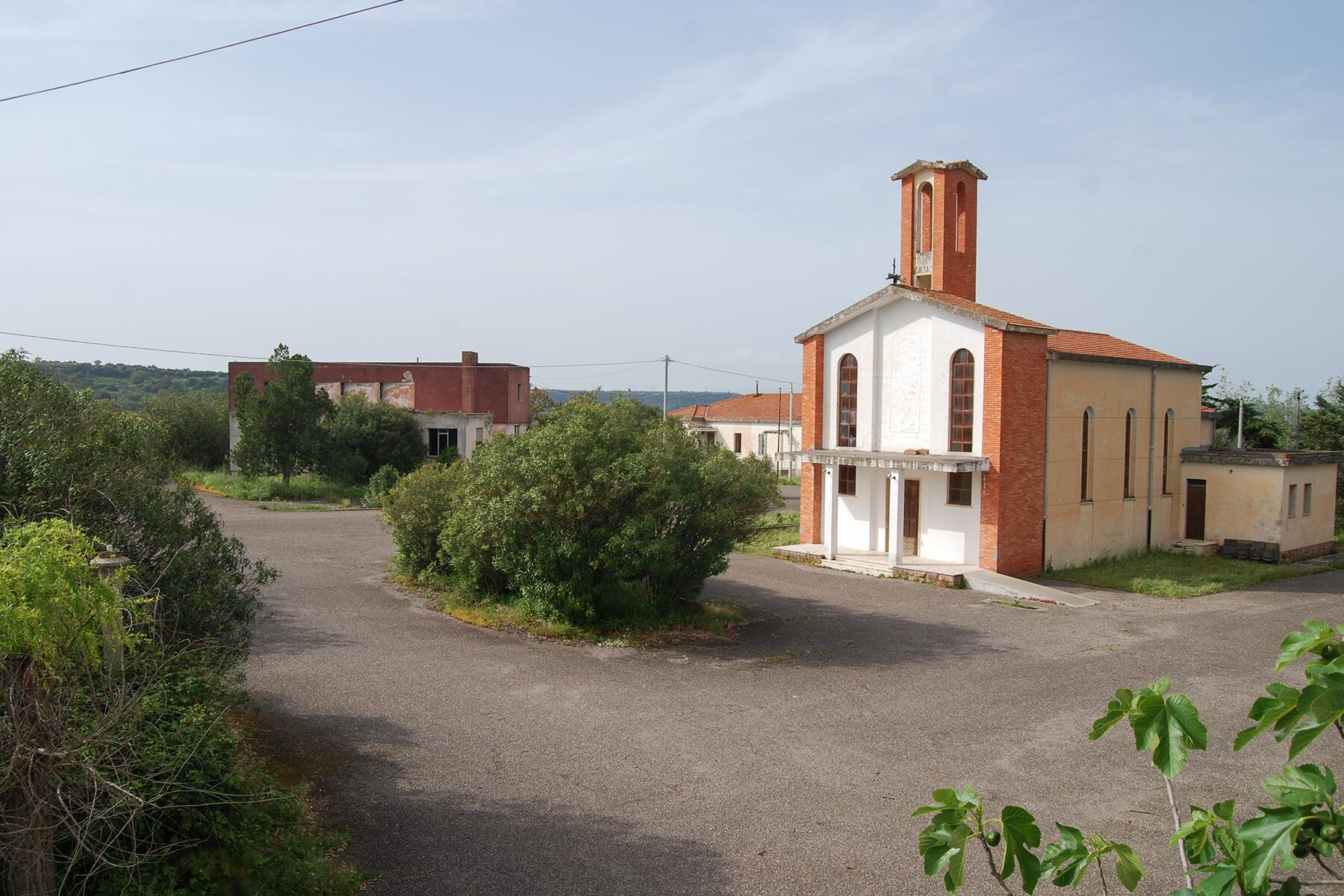 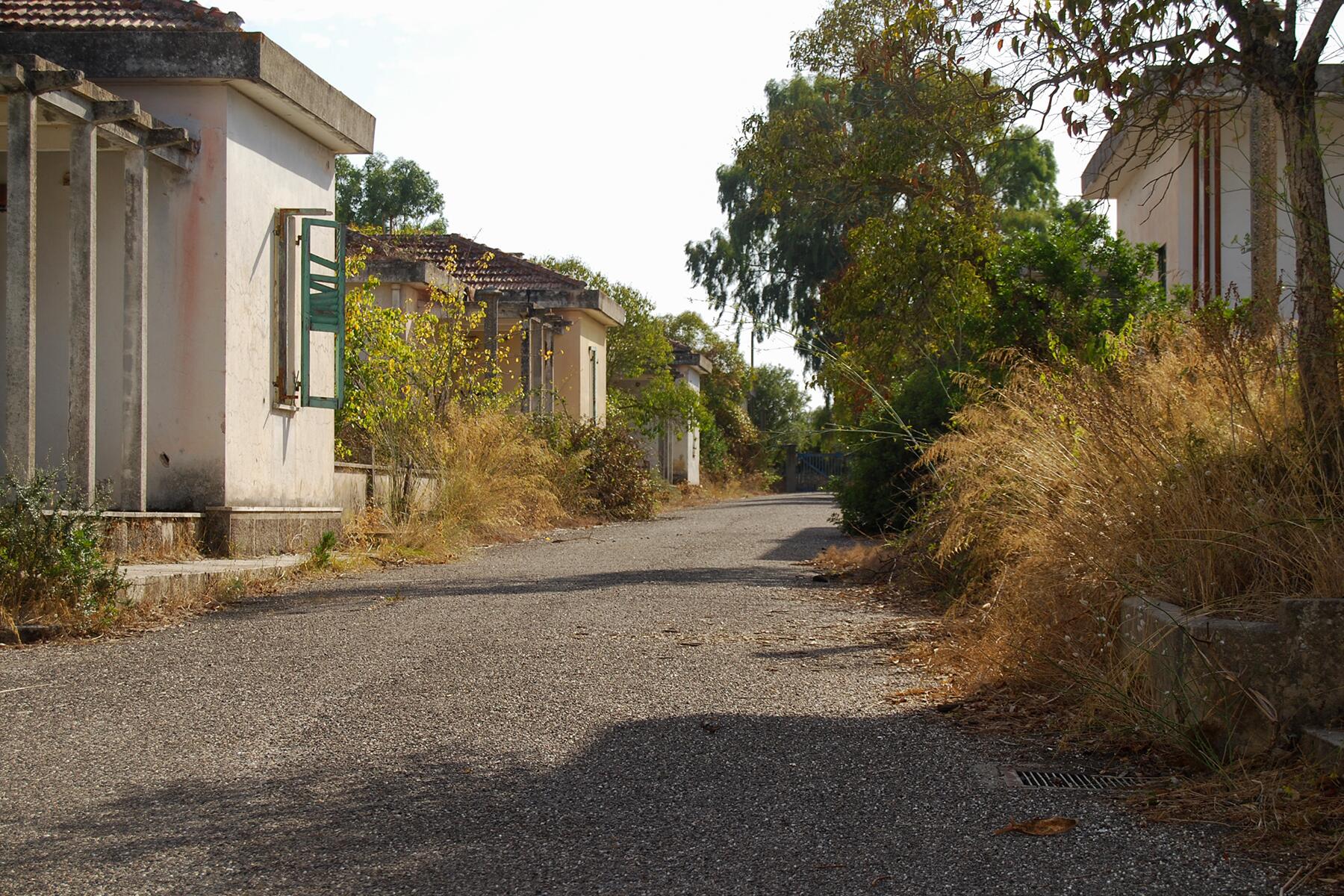 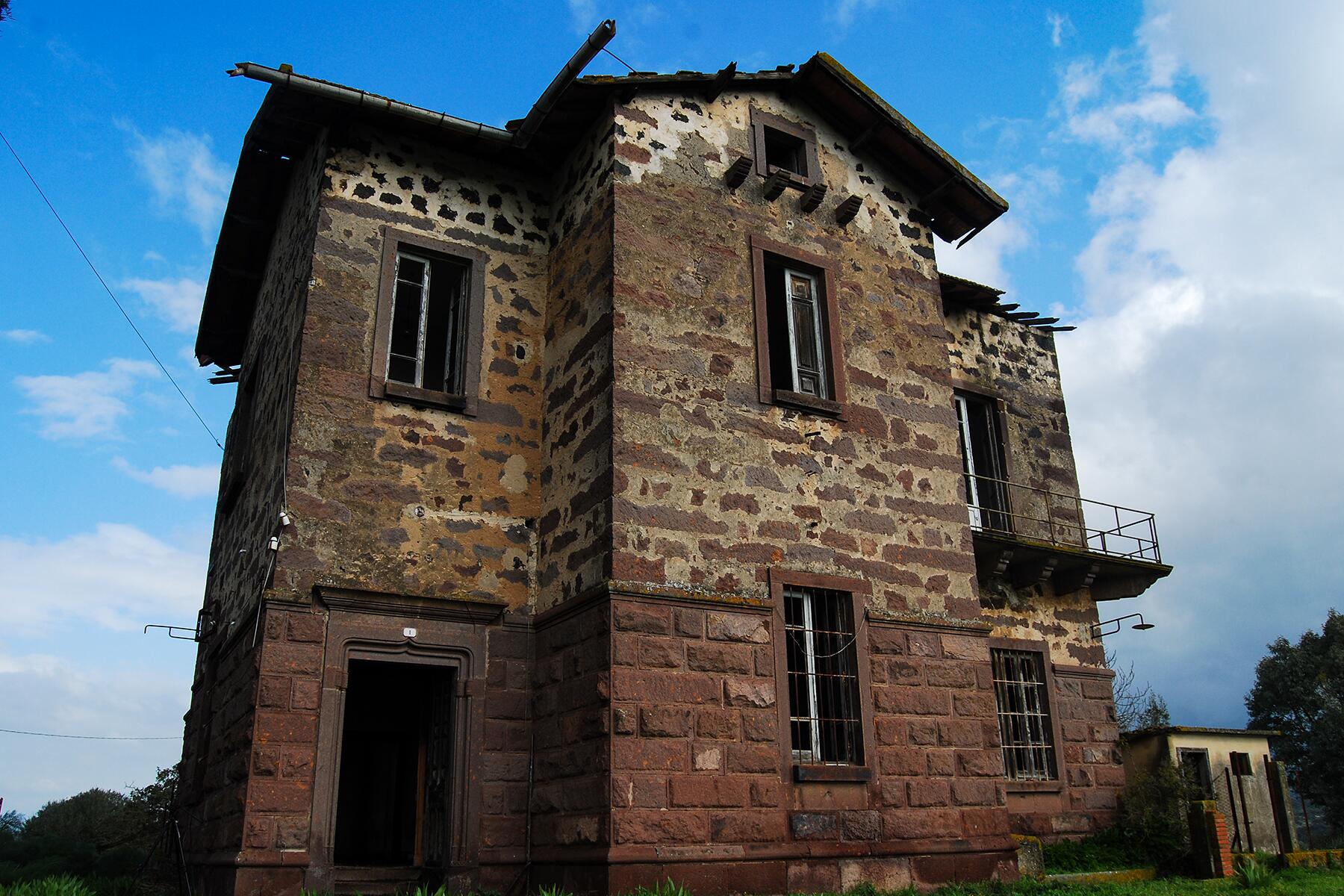 Inside the abandoned homes you can still spot old dirty mattresses, dusty cooking pots, and forks sticking out of heaps of debris. The old movie theater has just a few surviving seats while the projector has long been missing—robbed.

Living alone in a deserted place can be scary, even for someone as strong as Isabella. “People are [capable] of doing the worst of things. Vandals have ravaged many empty houses, destroying the walls and stealing the few things left. They have pulled down the only gates, doors, and windows that were still standing. Human beings can be real barbarians. I’ve helped so many people in my lifetime, yet here I am fighting alone,” she says.

Though Isabella may be alone, without any neighbors or relatives around to keep her company, she never feels lonely. “I feel happy here, there’s no other place I’d move to live in. Santa Chiara is my home, my little cozy spot where I grew up. All my past is stored here.” She has fond memories of her childhood when the hamlet was thriving with life. “My father helped build the lake dam and worked at the electric company. This was a tight-knit community, adults and children knew and helped each other out. It was beautiful, and we refused to flee even during the air raids in the second world war.”

If you happen to be driving around Sardinia in the countryside of Oristano city do stop by to say hello to this wonderful super granny. The lake is mesmerizing—legend has it a prehistoric tomb and the fossilized remains of a tropical forest hide beneath its waters. Isabella will be thrilled to meet you, but please don’t ask her about lottery ticket-winning numbers, and don’t freak out if she happens to give you a glimpse of your own future. Even though Isabella is not a tarot card reader, she can’t help what she foresees.