As I walk through the gate of the 600-year-old Castel Sismondo in Rimini on Italy’s Adriatic Coast, I’m enveloped by a muttering voice. No, the voice isn’t my own internal monologue saying, “um, what is this trippy place,” though it does add to that sentiment. Instead, the voice sputters trains of thought in Italian, with notes and scripts from the iconic Italian director Federico Fellini. Like Fellini’s movies, the new Fellini museum is a fantastic, bizarre, lavish, and extravagant experience—words that have come to define “Feliniesque” in the Oxford Dictionary—and I can’t wait to tell people about it.

An Epic Tribute to Fellini

I first heard about Fellini back in college when an ex-girlfriend showed me La Dolce Vita. The Italian film, shot in black and white in 1960, depicted life among the upper echelons of Roman society. The movie boggled my mind, so when I heard that a museum dedicated to the legendary director opened last year in his hometown, I knew I had to go.

Every time I told an Italian that I was going to Rimini, they’d scoff and say something like, “The town was a beach club spot in the ‘90s and is well past its prime.” Or, “It was ruined in World War II—nothing to see there.” But when I crossed the fog of water sprayed every hour outside the museum (a tribute to the ending of 8½) and entered the Fellini Museum, I quickly felt like scoffing right back. 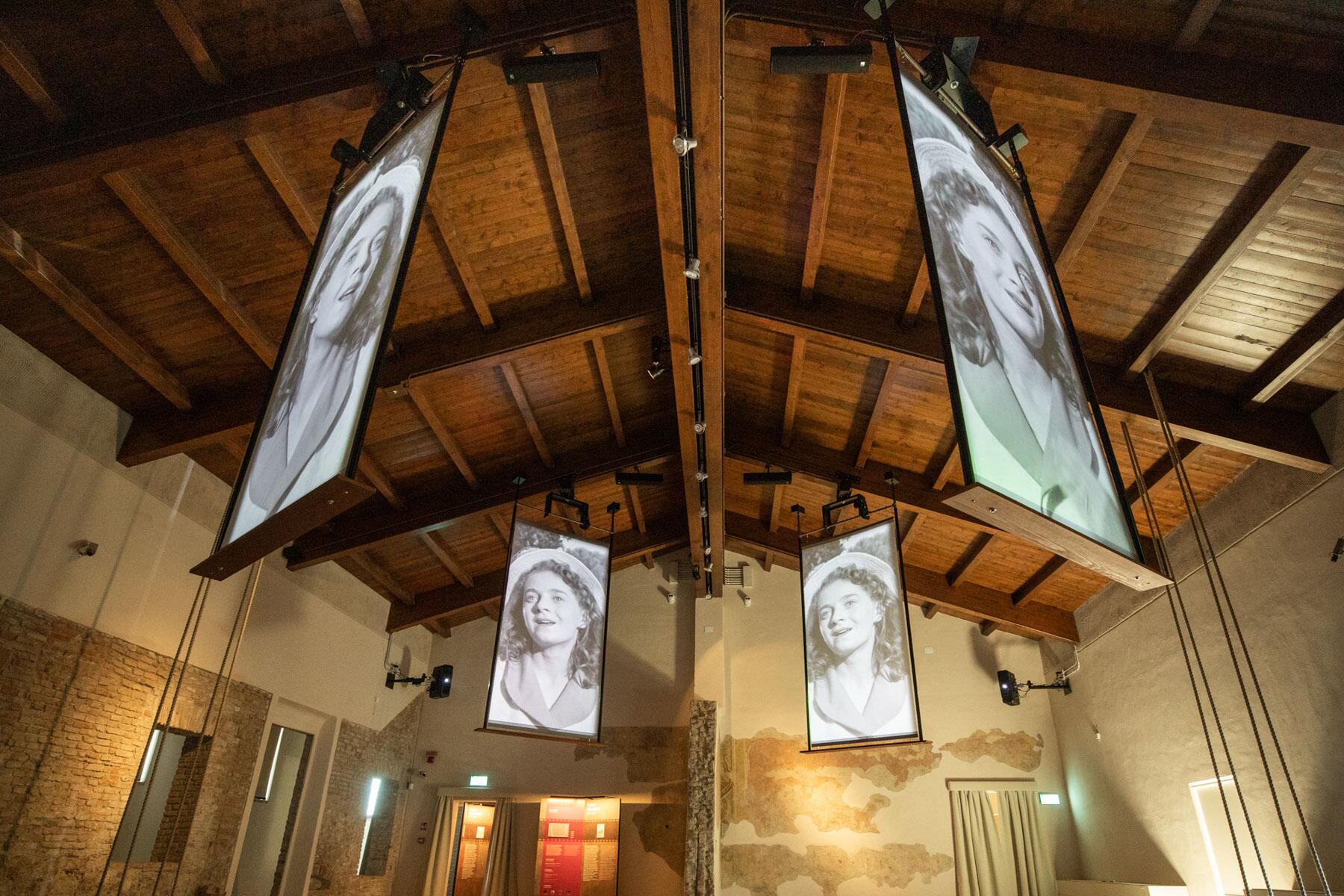 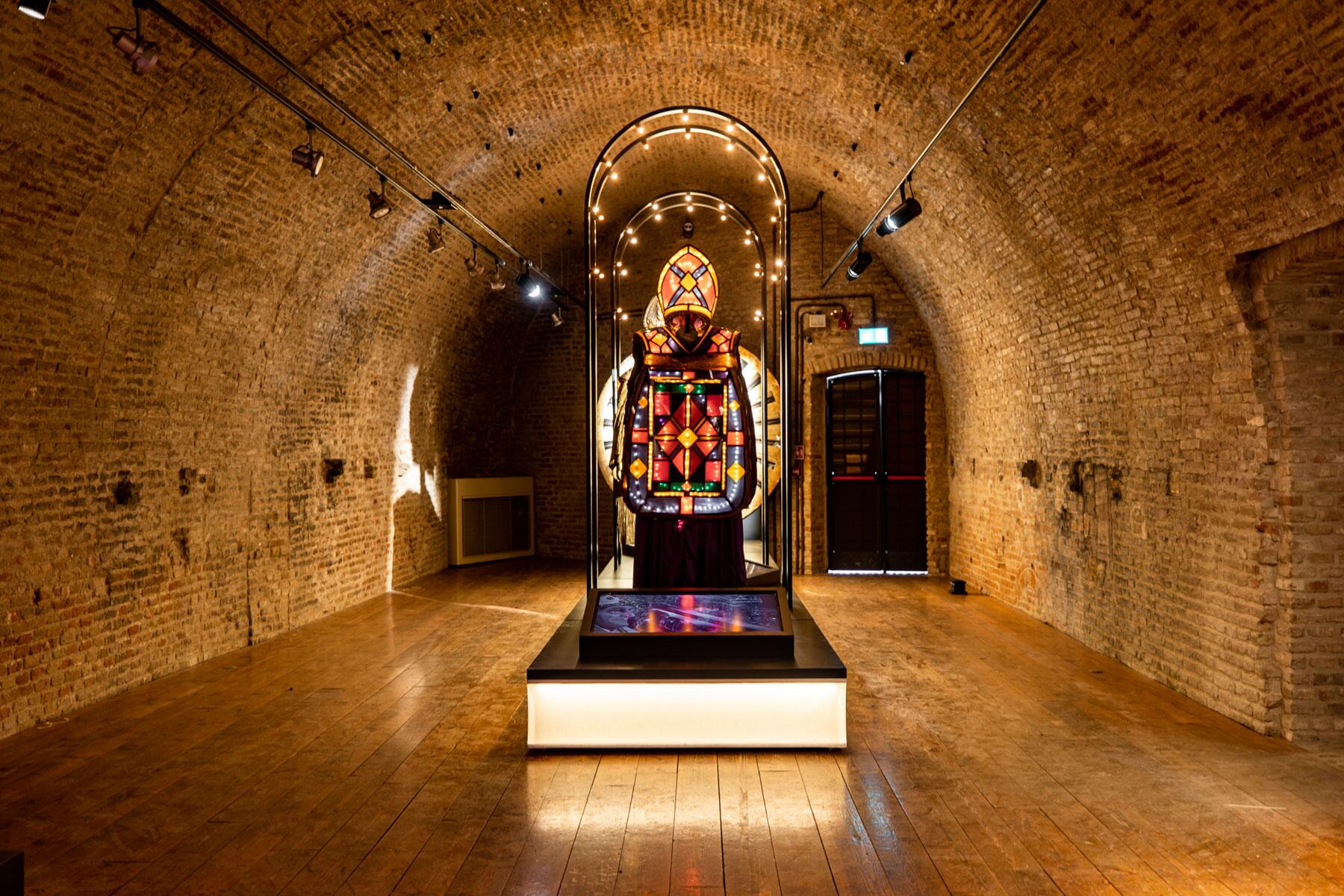 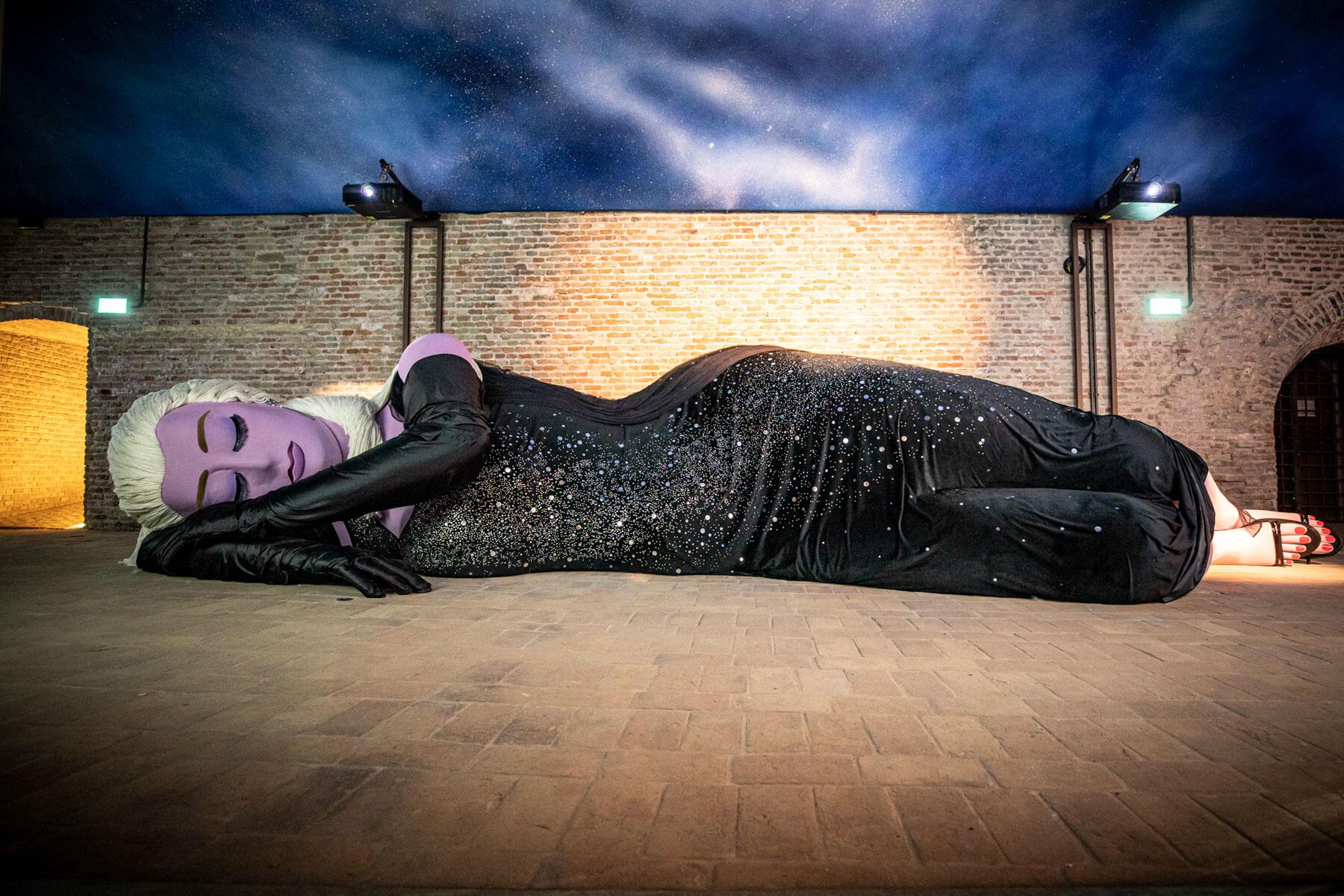 I soon realize the museum is like no art exhibition I’ve seen. What first strikes me is that the museum is housed in a Renaissance-era castle, Castel Sismondo, which was first built in 1437—a good 50 years before that infamous Italian explorer crashed into what we now know as North America, where I’m from. The castle had mainly gone unused for decades before a 10 million euros revitalization turned it into the museum we see today. Then, after stepping through the notepaper entrance, I became entranced by an arc of screens showcasing Fellini’s wife, Giulietta Masina, who starred in La Strada (1956) and Nights of Cabiria (1957)—films that won back-to-back Oscars in the Best Foreign Language Film category (he won four in total).

Next, I walk into the castle’s biggest hall and hang a left where a crane is dangerously set on top of a truck (a technique used by Fellini during filming), then turn around to see sheets on the ground with air blowing beneath them to simulate the ocean (as seen in Casanova (1976)). My wonderment continues in the next room, where I see a gigantic plush doll of La Dolce Vita star Anita Ekberg and lean up against her to watch a scene from the film. Upstairs, there’s a giant steel ball protruding from the ceiling (as seen in the ending of Prove d’orchestra) and confession booths that I open to reveal interviews with Fellini.

How would Fellini, who moved from Rimini to Rome at the age of 19, feel about his art being housed in a historic castle, I wondered aloud.

“He would be smiling,” said Marco Leonetti, a city official responsible for the museum.

From Parking Lot to Vibrant Square

The idea to build the Fellini Museum was intended to do to Rimini what the Guggenheim Museum did to Bilbao in Spain, and as I walk around the city, I can’t help but see that potential. 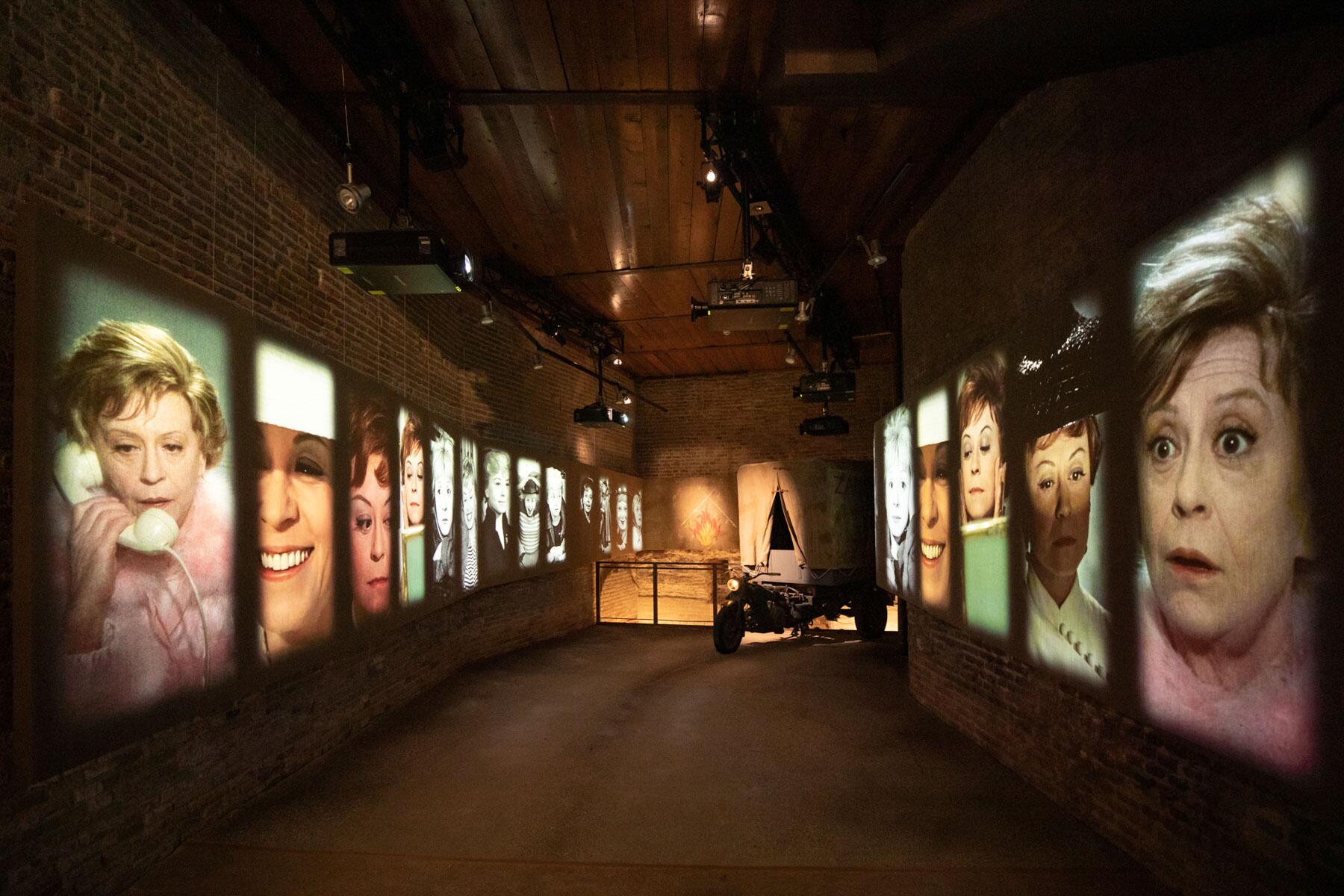 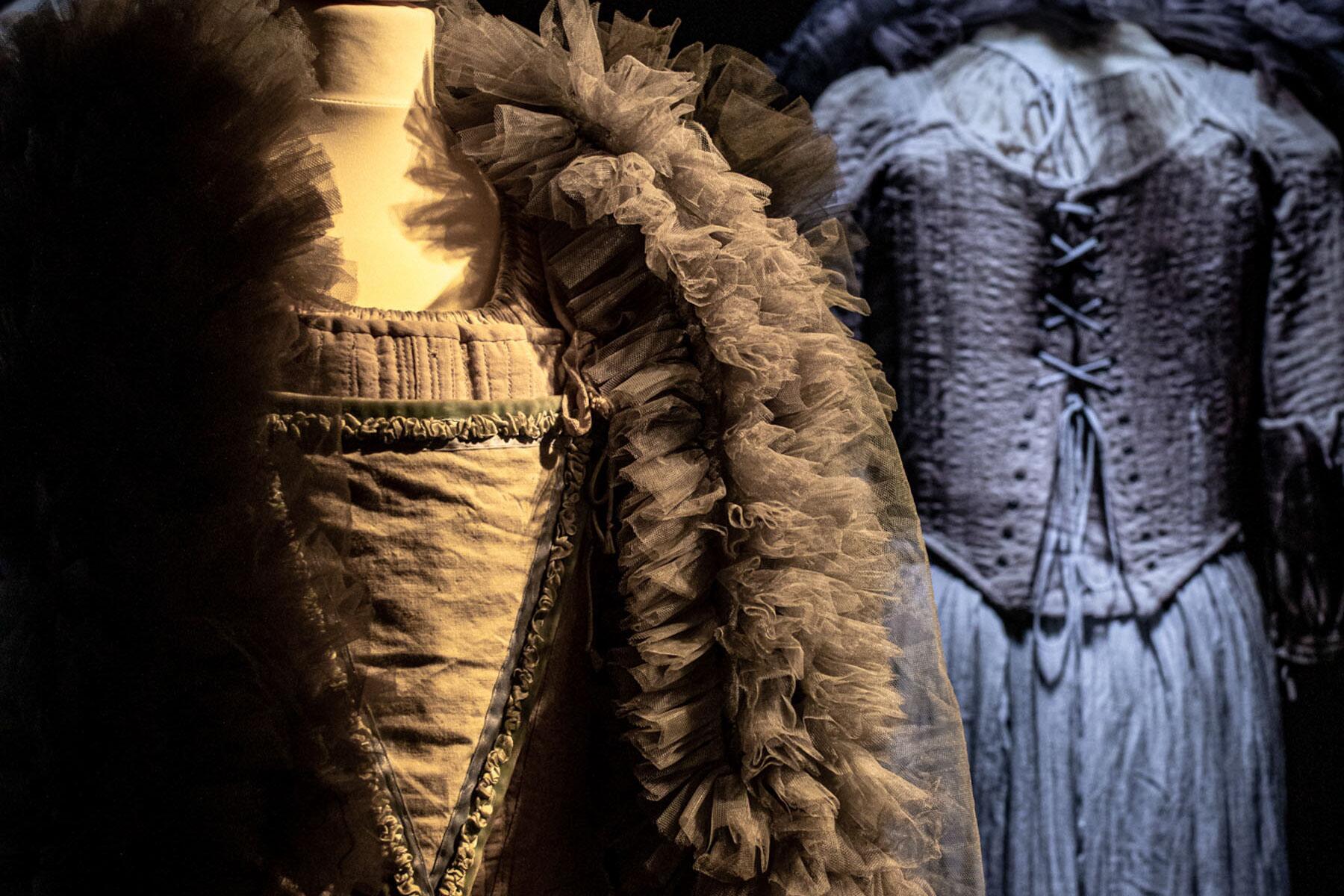 Piazza Malatesta, an 18th-Century square outside the museum, had once been a parking lot, but recent renovations have turned it into an attractive public square with lanterns that honor poet Tonino Guerro. The square also has more Fellini tributes, like a rhinoceros as seen in And the Ship Sails On (1983) (though it was roped off so you can’t climb on it, which I honestly think is a shame), and a circular bench to evoke the ring o’roses scene in 8½.

Next to the square, I look up at Teatro Galli, a 19th-Century theatre that was destroyed by Allied forces in WWII and left in shambles for 75 years before reopening in 2018. I also check out the Palazzo del Fulgor, an extension of the Fellini Museum where he first fell in love with American cinema. Inside are film posters and a few more interactive exhibits, including The Room of Words, another sound bath of Fellini’s words in a metal tent-like structure.

But while the museum and piazza are the focal points of Rimini’s revitalization, I find the town to be completely underrated. Along the Flume Marecchia, I pass Ponte Di Tiberio, a Roman bridge built in the year 21 (!) that was used for cars up until recently. On the other side of the river, I meander through Rimini’s historical district, Borgo San Giuliano, and snap far too many photos of toy-colored homes with unique murals and tiny European cars parked out front.

Even Rimini’s food is great. For lunch at Nud e Crud, I order a gazpacho with a creamier than creamy ball of bufala cheese and try the city’s prized street food—piadina, a flatbread sandwich with fresh Italian produce (never a bad idea)—along with a glass of Rebola, a wine made from grapes grown in the Rimini area.

Of course, I couldn’t leave town without seeing the beach, and as I walk along the sand, I picture thousands of shirtless partiers as it might’ve been in the ‘90s, though sadly, there was little going on at the time.

Fellini had a saying, “everything is imagined.” And while revitalizing Rimini certainly didn’t come cheap, I think it’s time to start imagining the director’s hometown a little differently.