Italy's historical Tuscia region often falls in the shadow of its more popular neighbors, Tuscany and Rome, but to miss out on this part of the country would be a mistake.

When it comes to Italy’s under-the-radar regions, you might have heard of (or even been to) Le Marche and Basilicata, but what about Tuscia? What if I told you that Tuscia is characterized by gently rolling hills dotted with olive trees, Medieval villages, picturesque lakes, and Renaissance palaces—and it’s only about an hour away from Rome?

Tuscia has long been a respite from city life for aristocratic families who built marvelous palaces, and today you can actually meet the counts and princes who call the area home. The region often gets skipped over in favor of Tuscany, but it shouldn’t. I recently spent a few days exploring Tuscia on a trip organized by Roma Experience, and boy, have I got some stories to tell.

We started off from Rome, where I live, and drove about an hour north to Sutri, stopping to see an ancient amphitheater carved into the tuff rock in the 1st century BCE by the Etruscans, a pre-Roman civilization that was conquered by the Romans in 396 BCE. (The region’s name derives from the word Etruscan.) Carved into a hill near the amphitheater is the Mitreo—a sort of school for the cult of the Persian god Mithra, which later became a church. Places like this give us clues as to the mysterious origins of these places and the earliest people who inhabited them.

But it was our next stop that gave a proper introduction to the region’s aristocratic history. Not to be confused with Palazzo Farnese in Rome, the Palazzo Farnese in Caprarola was built for the same noble dynasty, but on a much grander scale. One of the most powerful families in Renaissance Rome, they started building a fortress in Caprarola in 1530, but construction was halted until 1559 when Cardinal Alessandro Farnese hired the renowned architect Vignola to transform it into a princely palace. As we walked from one enormous room to the next, admiring the grotesques by Antono Tempesta (a form of wall decoration inspired by ancient Roman designs found in grottoes) and elaborate ceiling murals, I marveled not only at the impressive architecture but also at the fact that we were the only ones there. We were even alone in the incredible hall of maps, which inspired the one at the Vatican.

From there, we drove to Viterbo, Tuscia’s capital. Constructed largely out of gray volcanic stone, the city is home to important sites like the Gothic Palazzo Papale, which briefly served as the papal seat in the 13th century, and the best-preserved Medieval quarter in Europe. We stopped for lunch at Viterbo’s oldest restaurant, the Tre Re, where I tried a local specialty of chickpea-and-chestnut soup. Legend has it that some American soldiers stationed here during WWII tried to steal the hand-painted sign featuring three kings, which was believed to bring luck to anyone who touched it, so it was moved inside and now presides over the dining room. 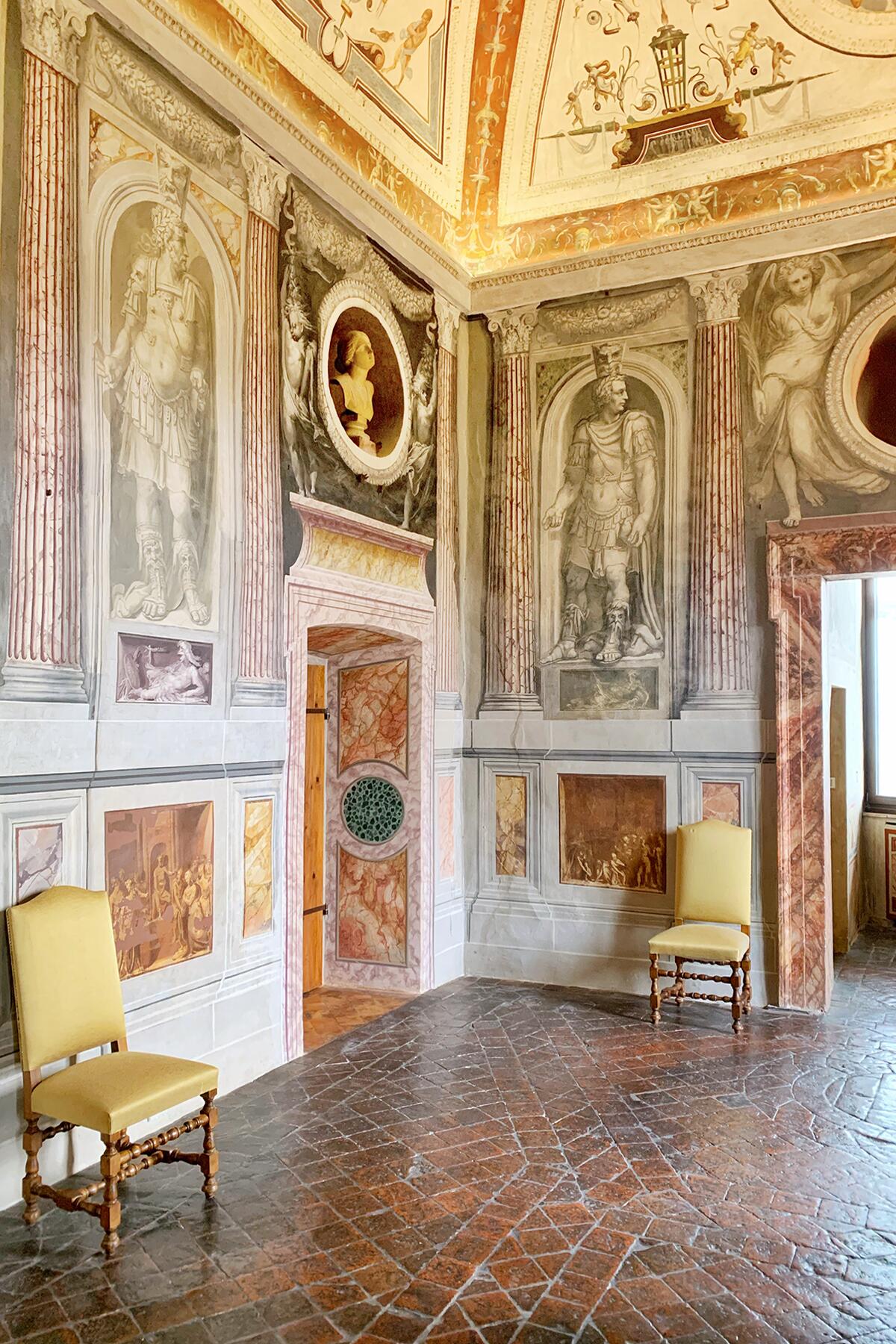 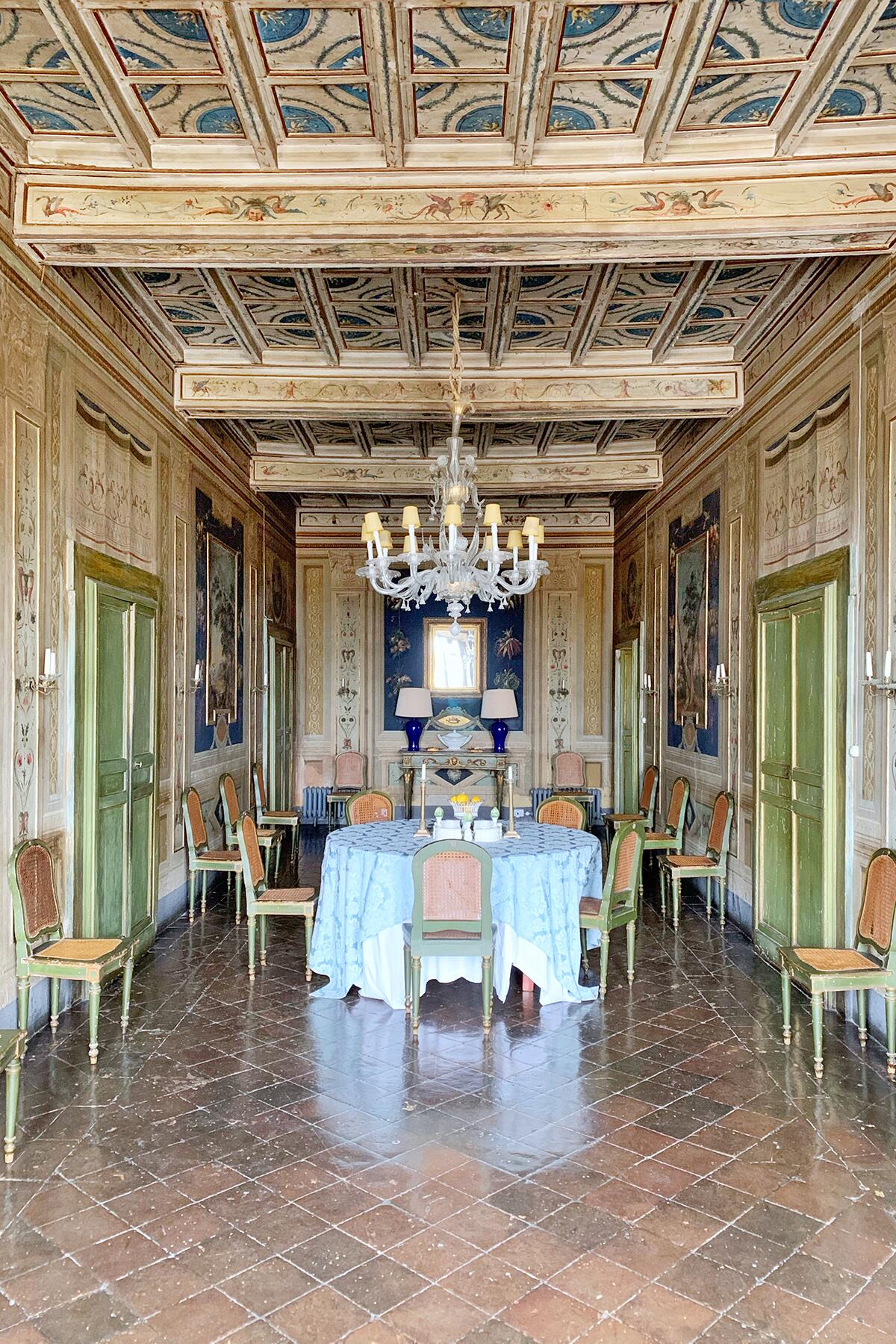 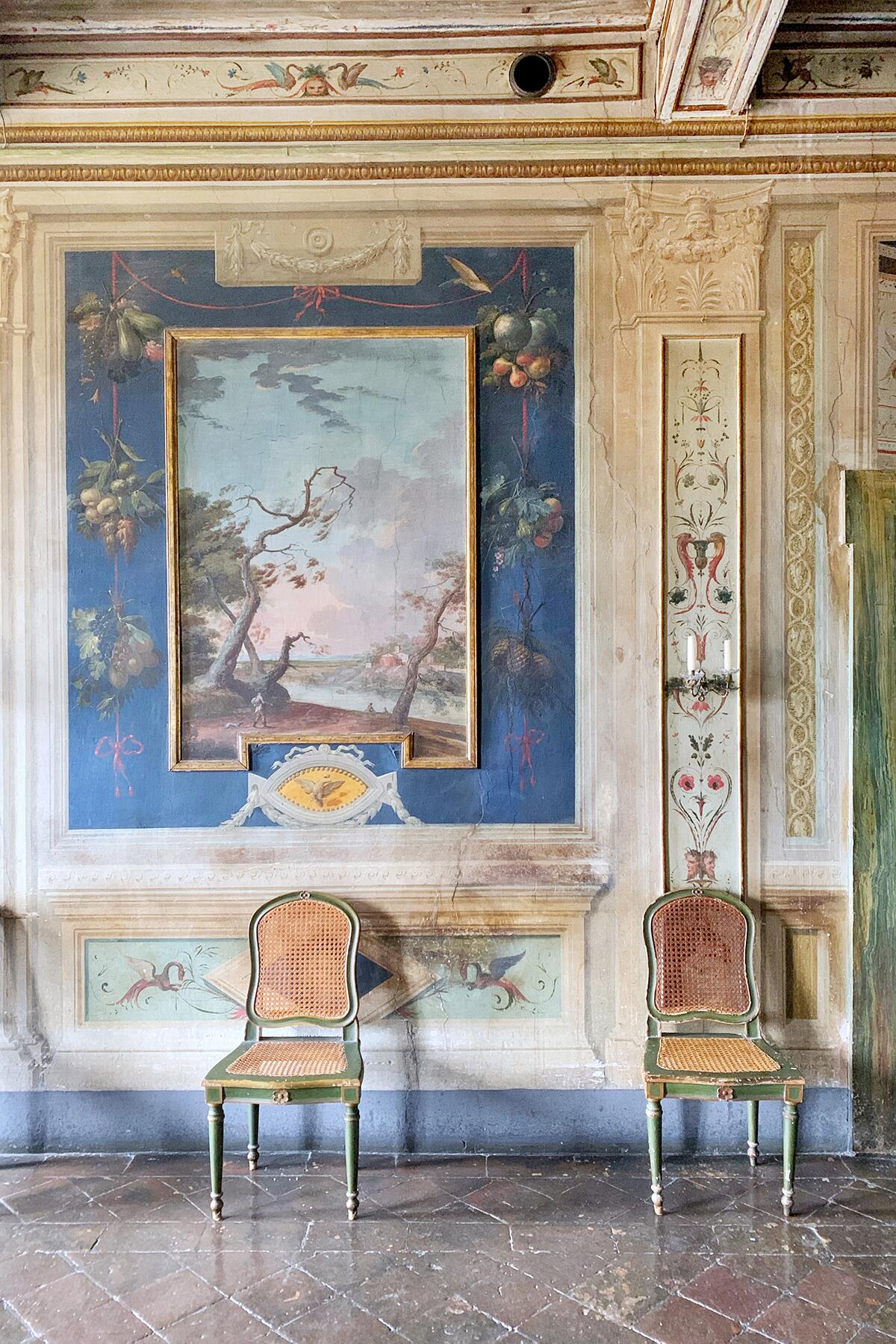 After lunch, we headed out to the countryside to visit the home of Noemie, a model who runs an agriturismo with her husband, where they raise horses and make olive oil and organic soaps. We hopped aboard her 1940s Pink Panther Jeep used by the British army for a ride through the countryside to visit some Etruscan tombs before returning to her house to taste her olive oil with homemade bread.

The next day, we headed to the Parco dei Mostri in Bomarzo, a Mannerist park full of larger-than-life sculptures of exotic animals and mythological creatures. This mysterious place was the passion project of Prince Vicino Orsini, who fought on behalf of the Farnese pope and married Giulia Farnese. When she died in 1560, he dedicated this park to her. One of the fascinating things about it is that the sculptures weren’t created elsewhere, but were sculpted out of the rocks found here. They’re covered in moss, and the park is full of cryptic messages that Orsini left for his visitors, adding to the mystical atmosphere. After he died, the park was abandoned for centuries until a visit by Salvador Dalí prompted its restoration.

After seeing traces of Tuscia’s aristocratic past, it was finally time to meet the counts and princes that still call the area home. That evening, we checked into VesConte, a hotel inside the Palazzo Cozza Caposavi in Bolsena, and were greeted by Count Francesco Cozza Caposavi, who showed us the incredible works of art in his family’s palazzo and recounted stories about his ancestors, including Alessandro Cozza, who, curiously, was the first person to import kiwis in Italy. The palazzo has been in his family for 14 generations and has hosted artists and intellectuals like Stendhal and Fellini. After a private dinner in the richly frescoed salon, I settled into my antiques-filled room to sleep. 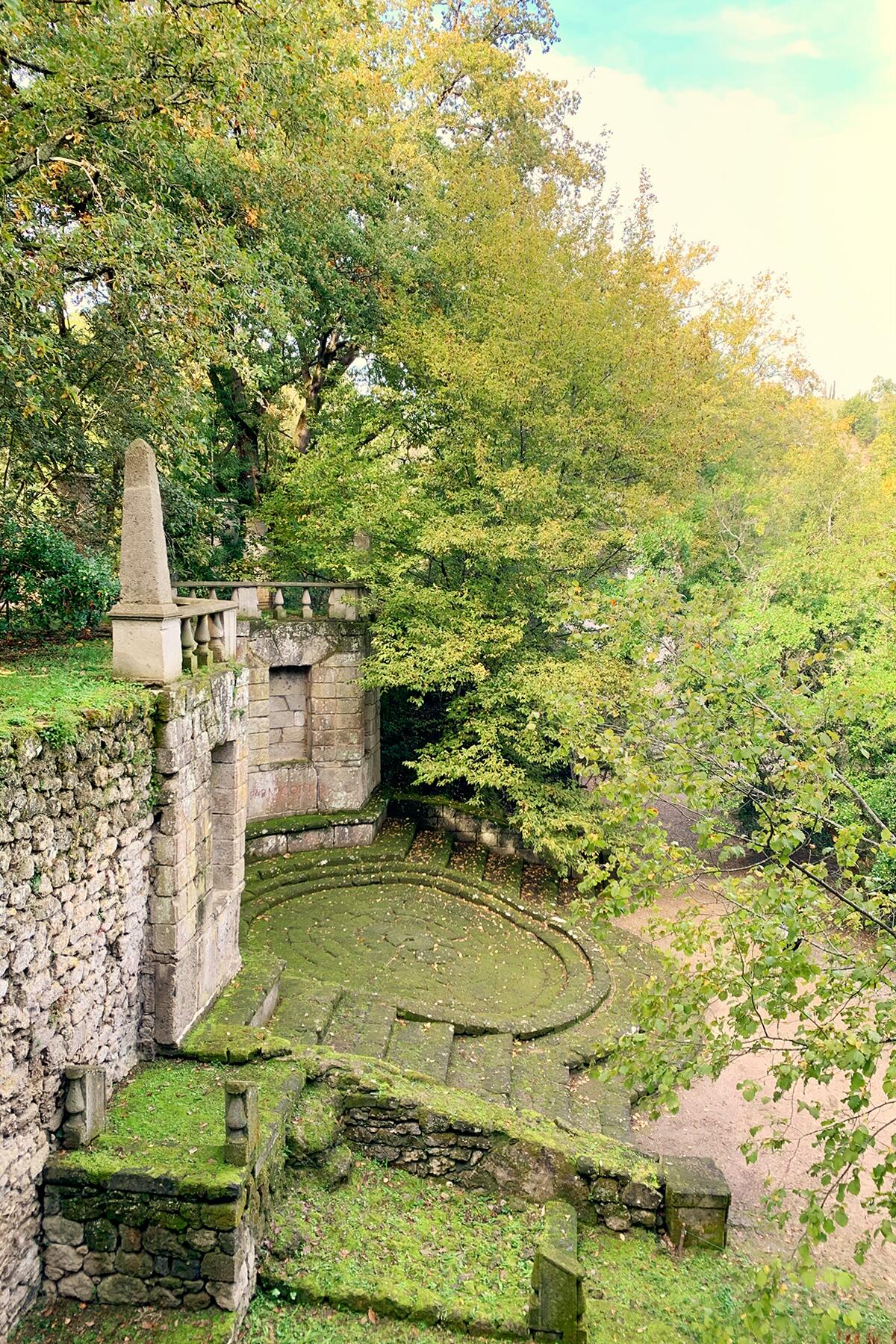 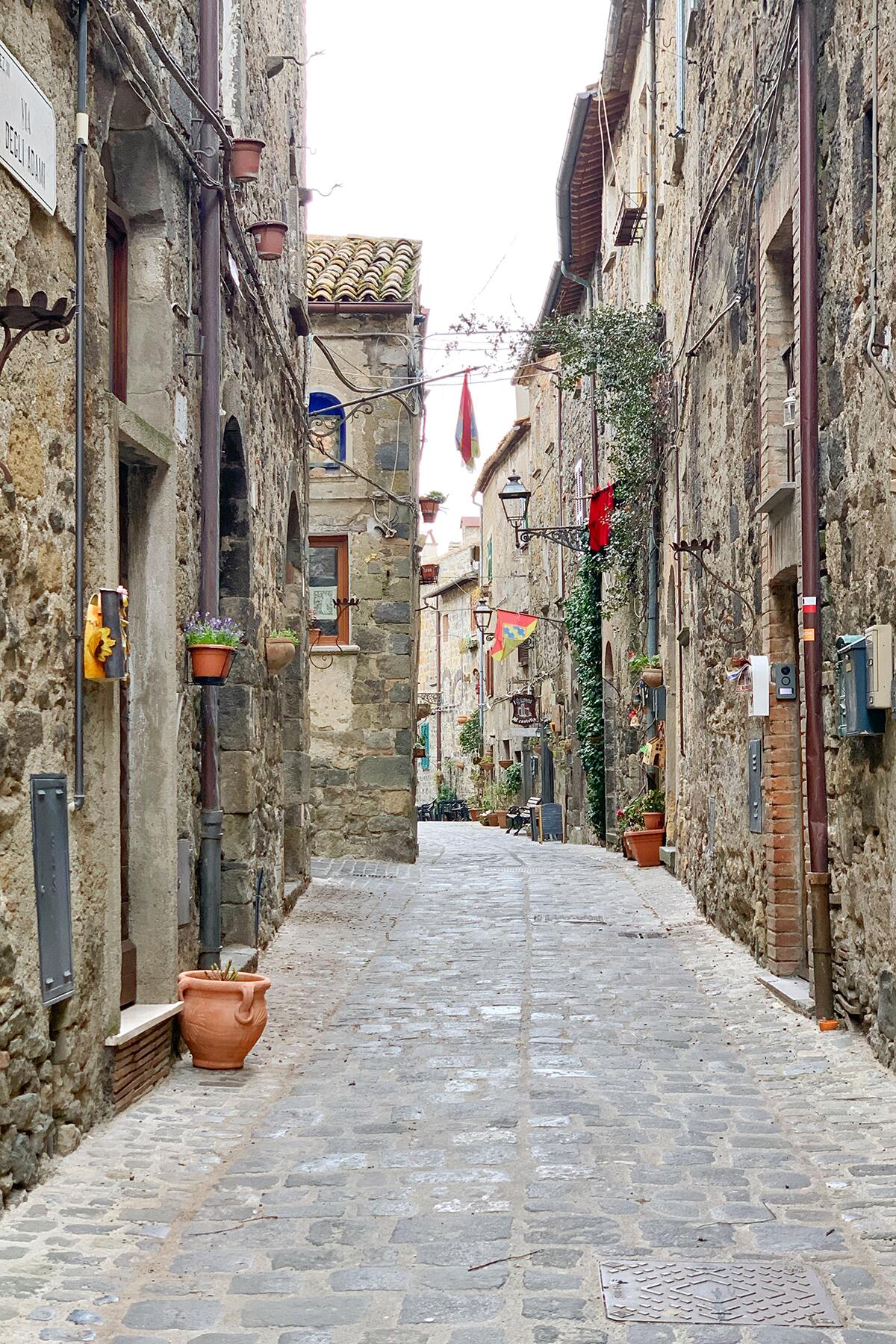 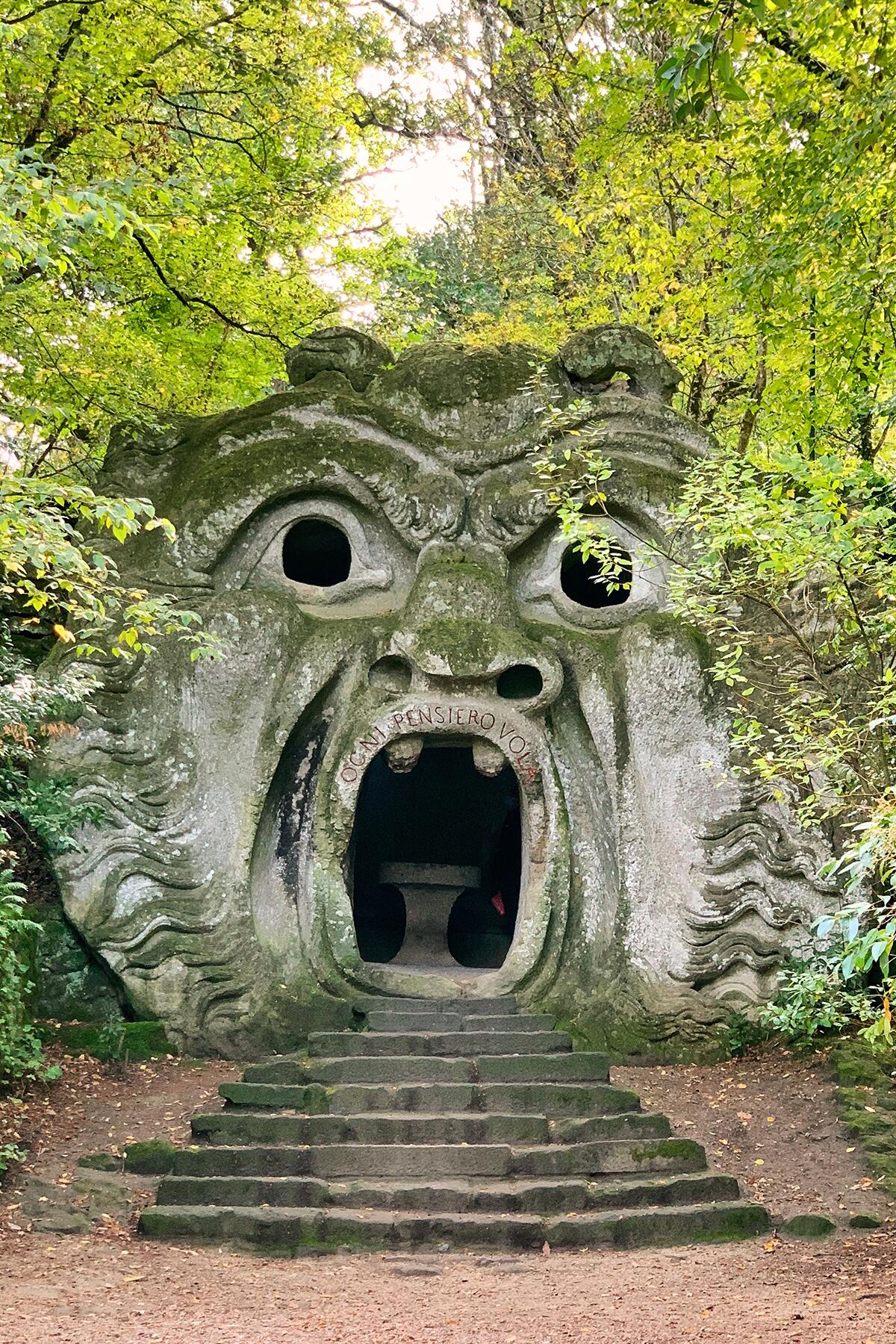 The town of Bolsena, which we explored the following day, and its namesake lake, are popular among northern Europeans but don’t get many American tourists. Originally inhabited by—you guessed it—the Etruscans, it became an important stop on the Via Francigena pilgrimage route. And it’s home to another aristocratic family. After a walk through the town, Principe Ferdinando del Drago welcomed us into his family’s palace, which dates back to the 16th century and is full of antiques, impressive works of art, and rare books. Curious, I asked what this charming prince does on an average day. His response: “I work in real estate.” Perhaps princes aren’t so different from the rest of us after all.

“Tuscia offers exclusivity, beauty, nature, and history, with a high gastronomic profile,” said Elisa Valeria Bove, owner, and CEO of Roma Experience, who has a background in archeology. “This place has an extreme versatility, offering enchanting, dreamy places like Bomarzo, as well as elegant, refined places like Caprarola.”

A master trip planner, Elisa saved the best experience for last. We arrived that evening in the tiny hamlet of Trevinano and pulled up to an 11th-century castle, where we were greeted by its proprietor, Principe Alessandrojacopo Boncompagni-Ludovisi. Still one of Rome’s most important families, the Boncompagni-Ludovisis trace their origins back to Pope Gregory XIII and Cardinal Altemps (whose palace is now the Palazzo Altemps museum in Rome). When he’s not busy running the Tenuta di Fiorano Winery and a contemporary art gallery in Rome, Prince Alessandrojacopo is an advisor for the Knights of Malta. After giving us a tour of the castle, he serenaded us on the piano and invited us to try some of his wines before dinner, which was a fabulous affair prepared by Michelin-starred chef Iside De Cesare.

I came away from this trip with a deeper appreciation for Tuscia, one of Italy’s most fascinating under-the-radar regions. Travelers who wish do to the same should book a tour with Elisa of Roma Experience, who can customize an itinerary according to your interests and organize exclusive experiences like our visit to Palazzo del Drago and dinner with Prince Alessandrojacopo Boncompagni-Ludovisi.