“Lesbians and women are not just welcomed here, they are also embraced and accepted here in a way that really stands out from other places considered lesbian-friendly.”

s I peered out of the small plane window from Athens, I finally glimpsed the island I’d been dreaming of—ancient Greek poet Sappho’s birthplace and home, Lesvos (sometimes written as “Lesbos”–in Ancient Greek, the word “Λέσβος” with the Greek letter “β” is most often transliterated to “v” in order to get the right sound). The outline of the three branches of the island looked familiar to me, nestled in the turquoise Aegean Sea, a silhouette I knew well as I had prepared for my pilgrimage to the home of the word “lesbian.”

Interestingly enough, residents of Lesvos (sometimes written Lesbos) are called Lesbians, unaffiliated with queer identity, and some of them sued the Greek LGBTQ+ rights organization in 2008 for “my kind of lesbian” to stop using their word. They lost, though they are still Lesbians, too.

I was visiting at the tail end of my summer backpacking through Europe. Lesvos, Greece’s third-largest island, was my most anticipated destination. While the Eiffel Tower and Leaning Tower of Pisa were nice to check off the list, this felt like coming home and entering a new secret world.

In the island’s capital, Mytilene, I sought out the statue of Sappho herself. The city has a population of 57,000. The statue was a modest tribute with some graffiti on it. Sappho lived from circa 630 BCE to circa 570 BCE and is remembered for writing poetry expressing love for other women, eventually giving her an icon status around the modern world and within the queer women’s community.

But you won’t find any Sappho merchandise playing up this hometown hero in Mytilene. According to A Girl’s Guide to Lesbos by Tzeli Hadjidimitriou, “[Sappho’s] association with female homosexuality has unwillingly caused the gifted poet to be somewhat exiled from the pantheon of great personalities of the island. The mention of her name brings an embarrassed smile to most locals who ignore Sappho’s poetry and focus on her sexual preferences.” 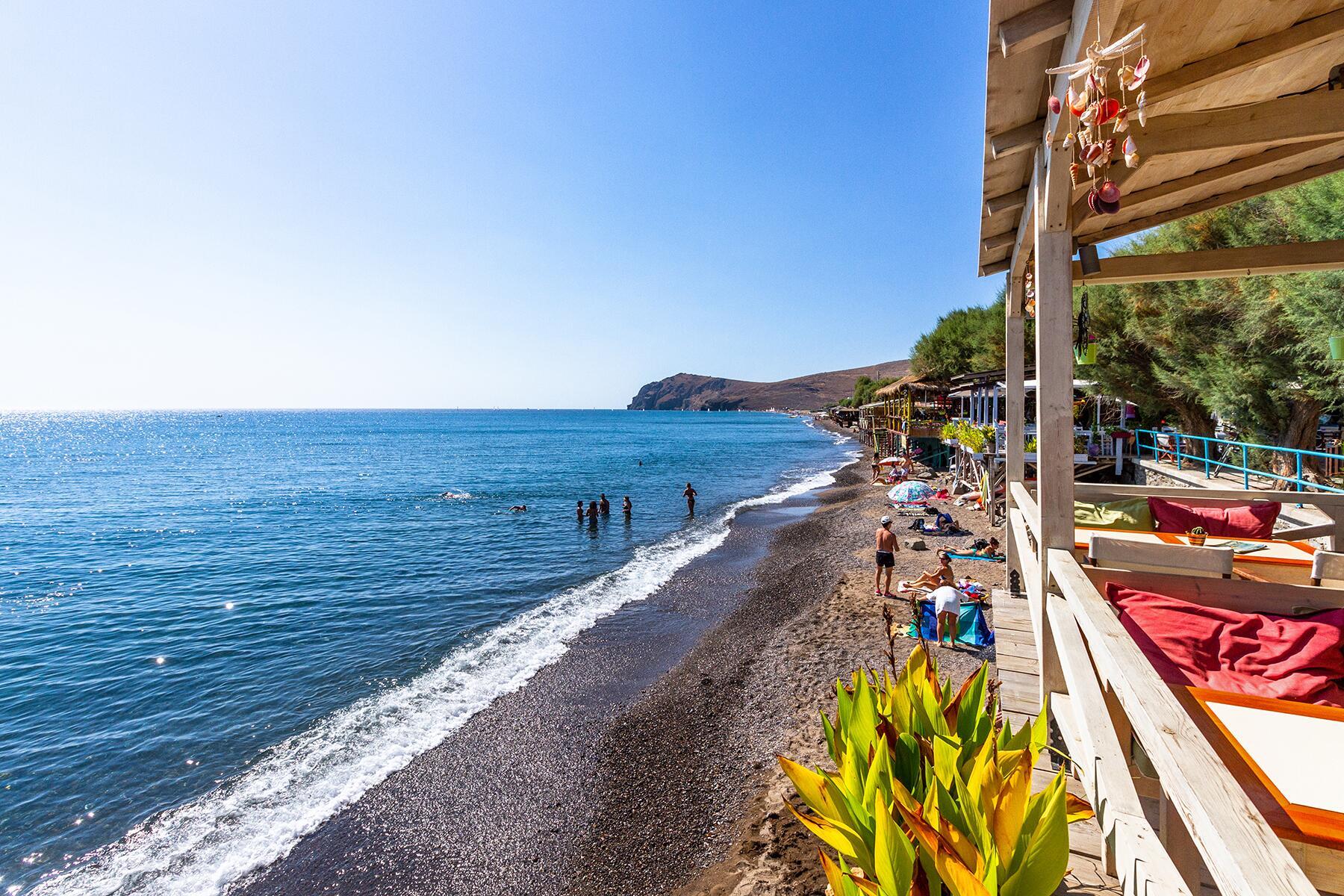 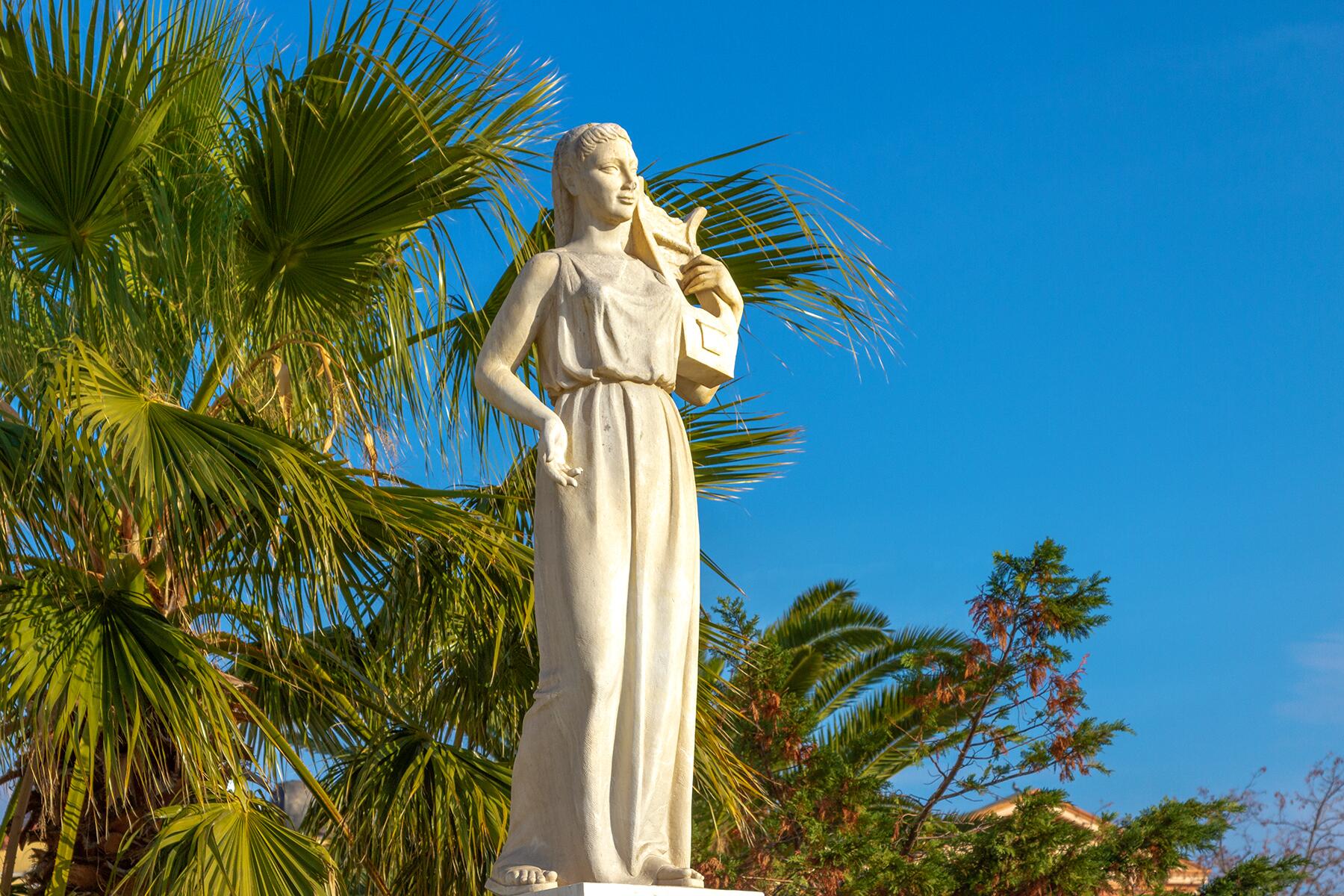 To find the sapphic haven I was seeking, I had to take the nearly three-hour bus ride to the opposite end of the island to the village of Skala Eressos (also written Skala Eresou), Sappho’s birthplace, which has become one of the only lesbian villages in the world.

Since the 1970s, lesbians have been carving out their place in Skala Eressos and building it up from a two-café outpost into an international destination. While the population hovers around 250 people, many more lesbian tourists than that visit each year, especially thanks to the International Eressos Women’s Festival, attended annually by between 700 and 1,000 people.

If you imagine a lesbian festival to be middle-aged women with short hair playing guitar and singing Joni Mitchell or women enjoying the sun together naked on a beach—you’d be right on both counts, in this case. The nude beach was a freeing experience I will never forget, but if you can tear yourself away, the festival offers dozens of activities that might also tempt you.

At the 2021 festival, women could join in or watch beach volleyball or a drag king show, go on hikes or bike rides, see film screenings and music performances, swim daily, see an art exhibition, participate in a laughter workshop, or take classes in kick-boxing, juggling, yoga, clowning, cooking, or pilates. The main draw for 20 years has been parties and nightlife, but with so many attending, organizers have expanded offerings.

“We very much do our best to pack our 14-day program with something to do for everyone that visits,” Wendy Jansen, president and co-owner of Sappho Women, the non-profit organization that organizes the festival.

A lot has changed since 2004, when Jansen first started co-organizing the festival. Greece’s debt crisis, an influx of refugees from Syria coming through Lesvos’s shores, and the COVID-19 pandemic have all impacted the island, the community, and the event. Though Jansen comments, “since the visitors of Skala Eressos are often returning guests, we have been blessed with a steady flow of visitors over the years, regardless of the crises that have challenged us.”

While the annual gathering is a “women’s” festival, most activities are open to all genders, with the exception of a few women-only workshops. Women’s-only spaces have gained a reputation as trans-exclusionary over the decades, but festival organizers say they are committed to being fully inclusive of transgender women.

Skala Eressos is certainly a women’s destination, not only a lesbian one. I stayed at a women’s-only hotel while I was there, and many women travelers will find a unique, safe, restful destination here. Nature-lovers, history buffs, birdwatchers, and artists are just some of the others besides queer women who may fall in love with the village that has retained a Bohemian vibe throughout its years of growth.

Many who visit come back year after year, not only for the destination’s beauty and offerings but also because of the people. There are few places in the world—maybe nowhere else—where lesbians can have such a refuge to be together in a community like in Skala Eressos, a homeland of sorts. As Jansen puts it, “lesbians and women are not just welcomed here, they are also embraced and accepted here in a way that really stands out from other places considered lesbian-friendly.”

Staying at my hotel 16 years ago, I met a woman who was there on leave from the U.S. Army, serving under the Don’t Ask, Don’t Tell policy. She could come to this place where no one from her employer would know her and be herself. When I got a lesbian pride tattoo on a whim while I was there, she shook her head and called me stupid, like an auntie might chide a family member. Women danced on the beach without speaking each other’s languages, but all recognized something in each other instantly. Looking out at Turkey’s coast in the distance from the beach, there was no doubt this village was unparalleled.

The International Eressos Women’s Festival happens each September, and all-inclusive two-week tickets cost 80 euros. The Sappho Travel Agency or Sappho Travel can help plan your trip any time of year, and the books and films of native Lesbian Tzeli Hadjidimitriou will help you get ready to go.