Imagine a play with 700 people and live animals on stage, and you’ll get Passionspiel.

It was supposed to happen in 2020, as it has for nearly 400 years in the Bavarian town of Oberammergau: a decennial presentation of the passion play, which tells the story of Jesus’ last days in Jerusalem, as well as his trial, death, and resurrection. Covid-19 had other plans, and the play was postponed two years to 2022.

Recently, I was invited to one of the final dress rehearsals for this spectacular spectacle and had the opportunity to watch a good bit of it, meet the director, and tour Oberbayern, the breathtakingly beautiful region that may be better known for Ludwig II’s Neuschwanstein castle, and where performances began in Oberammergau on May 14. I joined some 500 journalists and travel planners and tried to answer the question: Is this something worth seeing today?

The History of the Oberammergau ‘Passionspiel’

In 1632, during the middle years of the seemingly interminable 30 Years’ War, a different kind of plague visited the Bavarian village of Oberammergau, just as Covid-19 came in 2020. The village leaders pledged to perform the Passion every ten years if they could be spared further death and suffering. If the legend is to be believed, deaths ceased immediately, and the play’s first performance was staged in the village graveyard in 1633. In that era, plays acting out the so-called “passion of the Christ” were common and popular, albeit local, affairs. So why did Oberammergau’s become famous the world over? That, as they say, is the rest of the story.

With the help of the friars of Ettal Monastery, just three miles down the road (not an insurmountable distance even in 1633), the play was written and rewritten over the years, always with the oversight of the Catholic church. And it was seen by hundreds (and occasionally thousands) of people every year. So it went for about 150 years. By the end of the 18th century, the number of viewers was 11,000 in 1790, a likely high point up to that time. And so things continued until 1840 when the play got its first broad reviews in the press; that year (the 23rd performance) was seen by the Crown Prince of Bavaria and the King of Saxony. Plenty of famous people have seen the play: King Ludwig II, the composers Franz Liszt and Richard Wagner, Crown Prince Edward Albert (later King Edward VII), and even Adolf Hitler (who was a big fan).

But the most consequential viewer was likely travel pioneer Thomas Cook, who saw the 27th performance in 1880. He decided that the play had tourism potential. Even though the railroad extension to nearby Murnau had increased viewers to 100,000, it was Cook who decided to promote the play to his English-speaking customer base. And the behemoth was born. Today, some 500,000 people flock to Oberammergau in any given year to see the play.

What Makes This Play Special

Oberammergau is a small village of about 5,000. To perform in the play, you have to be born in Oberammergau or have lived there for 20 years. There are 40 major speaking roles, and each of those actors has a backup (they tend to alternate performances), but the whole ensemble includes about 1,000 people, including the choir, the orchestra, and the staff.

The play consists of 12 scenes, the highlights of any such play, including Jesus’s arrival in Jerusalem, the Last Supper, his trial, his crucifixion, and his resurrection. Even though everything is in German text, you’ll get the gist of what’s going on if you are moderately familiar with the stories from the Gospels.

Between the scenes, there are tableaux of Old Testament scenes (called “Living Images,” including the Garden of Eden, Moses at the Burning Bush, Cain and Abel, etc.).

There’s also an unusually impressive 64-member choir to sing the choral parts and a 55-member orchestra. In all, almost 25% of the residents of Oberammergau perform or participate in the play each decade.

Although it has been refined over the years, the current production dates to 1990 when 24-year-old Christian Stückl took over as director. He is still the director (on his 4th performance) and revises the text and production every decade, though the music is substantially based on the score composed by Rochus Dedler, an Oberammergau native, in 1820. 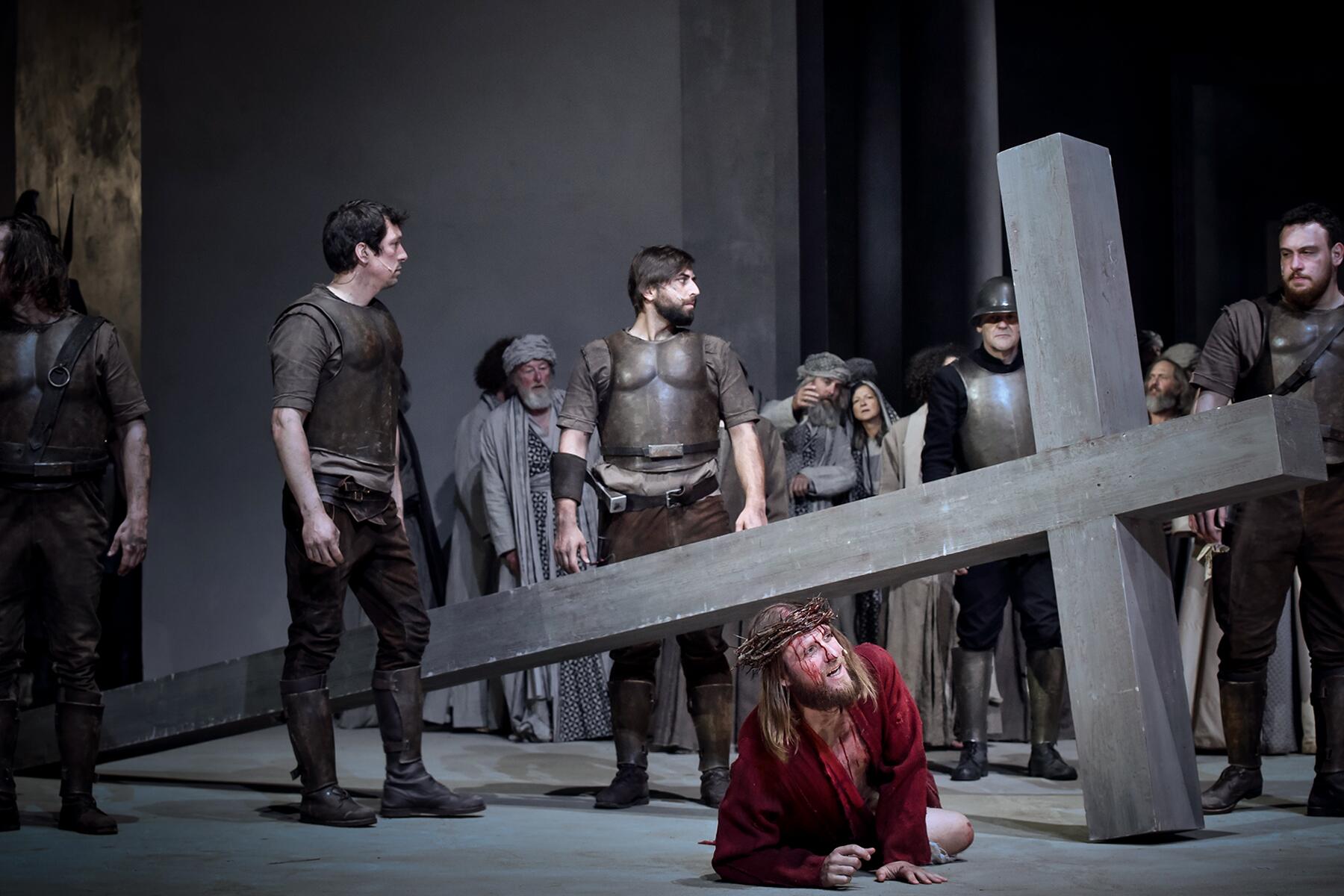 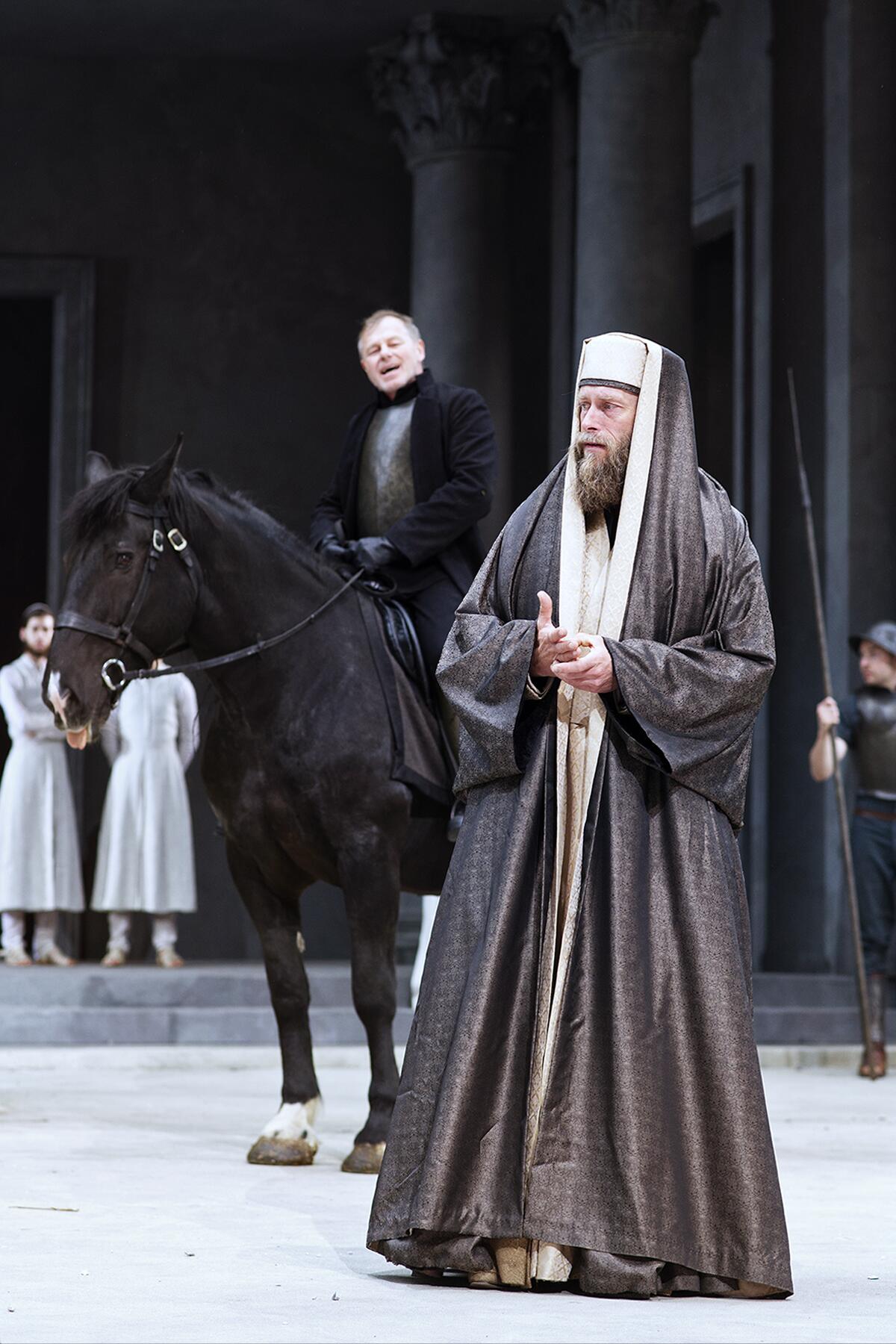 Some 700 people may be on stage in the biggest scenes, including live horses, donkeys, camels, goats, sheep, and doves. (Before Covid-19, the larger crowd scenes had up to 1,000 people on stage).

If you are looking for a specific activity to put on your bucket list, this would be it. While the play will probably resonate more with Christians, the spectacle is something everyone can relate to, and the performances are quite good, despite the fact that the entire cast, from musicians to choristers to actors, are all amateurs.

To be honest, it makes the whole thing even more impressive, but this is what Oberammergau stands for, and performers are taught their roles from an early age. Frederik Mayet, one of two men who play Jesus this year, is reprising his performance from 2010. The other Jesus, Rochus Rückel, is the second-youngest to ever play the role.

What You Should Know Ahead of Time

The play is performed only in German (no English supertitles), but you can buy the text in English to follow along. Some packages include the text with the package.

The play lasts a total of 5 hours, but the experience is 8 hours long, from 3 to 11 pm, because there’s a 3-hour break between acts 1 and 2 for dinner. Most viewers dispatch to one of the village’s many restaurants, and most packages include dinner (make sure yours does since the village is overwhelmed with visitors on a performance day).

From May 14 to October 2, 2022, the play will be performed from Thursday through Sunday and Tuesday (no performances on Monday and Wednesday).

The Passion Theater was built in 1900 (at the behest of Thomas Cook), and the current stage—which dates from 1930—is the largest open-air stage in Europe. The whole theater is covered, so if it’s raining, you won’t get wet even though the theater is “open.” A newer canopy now covers the stage itself, so performers don’t get wet either, but the performances go on rain or shine. Be aware that it can get cold since you’re in the Bavarian Alps here, so blankets are available.

Tickets cost €90 to €180 for tickets alone, but most people buy a package, which costs from €300 to €1200 per person depending on the length of time you say and the fanciness of your hotel and meals. You can buy tickets directly from the Passion Play agency [or by phone at +49 (0) 8822 835 93 30]. Or you can purchase from any number of tour companies and travel agencies around the world.

Most visitors buy a package that includes 1 or 2 nights at a local hotel to avoid the 90-minute trip back to Munich, but on performance days, there is a late train back to Munich from Oberammergau.