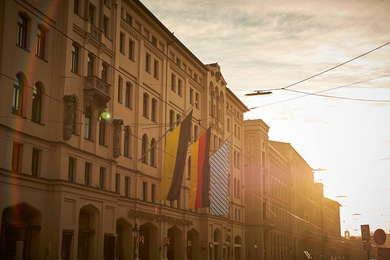 This hotel's lobby has been called the "most beautiful living room in Munich," and just as the world's wealthy and titled have for more than 160 years, you'll feel at home enjoying a drink and a bite in this "lived-in" spacious and luxurious room with a gorgeous glass dome ceiling and dark-wood paneling. The building itself is beautiful, slotting in perfectly among its neighbors on Maximilianstrasse, Munich's premier shopping street, and the hotel delivers all the swankiness and attention to detail you'd expect from the Kempinski brand, from the lovely spa to the carpets in the corridors that echo the Isar riverbed.

Ask about the hotel's history - it's a rollicking ride. Founded 160 years ago on the wishes of the Bavarian King, Maximilian II, who wanted somewhere to house dignitaries, it even had six toilets when it was built - something not even the palace could boast at that time. In the world wars, the only part of the building not destroyed was the facade. And in its more modern history it has hosted guests from Prince Charles to Karl Lagerfeld.

Rooms are comfortable, but given the lush feel of the rest of the hotel, can seem a little corporate, with some low ceilings. However, the beds are huge, the furnishings are plush, and the large gold mirrors further open out the space. Many have been newly renovated, and the rest are in the queue for an update. There are some nice local touches, like pictures of Munich on the walls--copies of originals that hang in the city's museums.

Some rooms have showers, some baths, and some both - ask if you have a preference. The renovated rooms have beige bathrooms, with Salvatore Ferragamo toiletries and TOTO toilets that have all mod cons from warmed seats to oscillating water jets. Older rooms have black bathrooms with step-in showers.

The lobby really carries the wow-factor of this historic property, with a beautiful ceiling and a pleasant vibe, as well as an in-house patissier. Reception can be a little hard to find--it's on the right, up some stairs.

YOU SHOULD KNOW All this fanciness doesn't come cheap - and some guests have complained that the service was not quite up to the 5* standards they expected across the board.

The hotel's pool, part of its spa, is small but attractive; its nicest feature is that it is located on the 6th floor, alongside the hotel spa, so it gets lots of natural light and there is an outside terrace, too.

The hotel's luxury spa is a lovely spot, perched on the 6th floor with the pool and boasting treatment rooms, a sauna and a steam room, as well as views of Munich's Old Town. There's a nude area.

The hotel's dining offer is top-notch, although possibly a little confusing (its brilliant one-Michelin star restaurant, Schwarzreiter, opens in the evenings only and has the same name as its more chilled bistro sister offering a daily menu, Schwartzreiter Tagesbar--both are named after King Ludwig II's favorite fish dish).

The Jahreszeiten bar has a cosy, somewhat masculine feel, all leather and mahogany with copper lights over the bar and silver cocktail shakers. There's a cigar lounge too.

The hotel is brilliantly located on Munich's finest shopping street, and still close to all of the rest of the city's delights.

The venerable Munich Hofbräuhaus (3-minute walk) is your best bet for a nearby traditional beer house. Or for cocktails, try Pusser's (2-minute walk); this American-style cocktail joint, open since the '70s, is named after a brand of rum and has a naval feel and live piano music four nights a week.

Swanky swanky swanky: you'd expect nothing less from a Kempinski, but this hotel is set apart by its lively history, beautiful heritage architecture, and top restaurant, as well as its grand location right on Maximilianstrasse.