Tbilisi for Art and Design Lovers 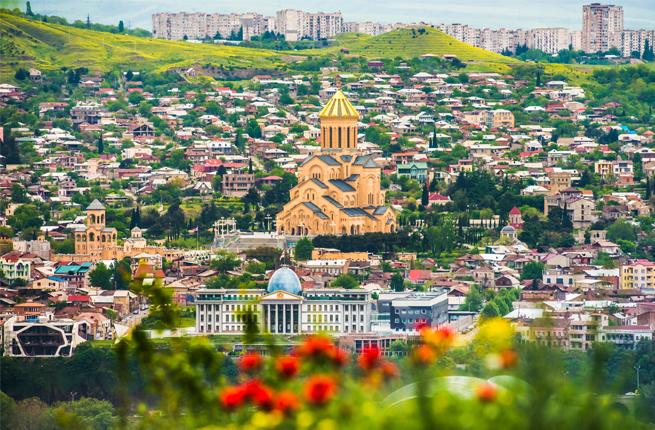 At the crossroads of east and west, the Republic of Georgia is a place that has long absorbed opposing influences, and its charming capital, Tbilisi is no different. With its crumbling Neoclassical buildings and winding streets, Tbilisi is filled with history. But as it emerges as a hot travel destination, the city is also embracing modernity as it strives to move beyond the cultural stagnation of the Soviet era.

Here are our recommendations for getting a taste of Tbilisi’s booming creative scene. Each is notable for balancing modern approaches with tradition, reaching into the past for inspiration while looking to the future. 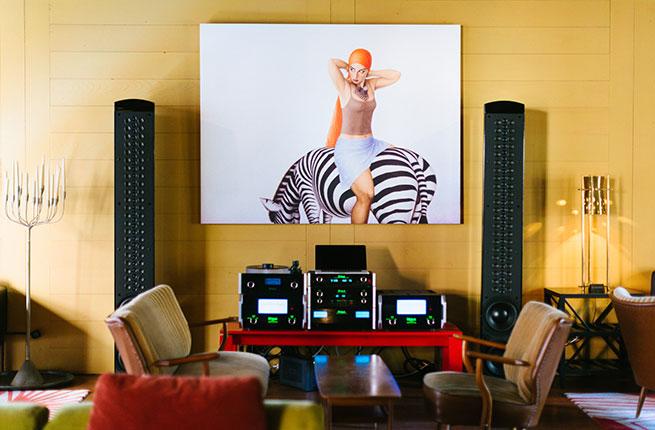 Rooms Hotel opened in a Soviet-era publishing house in the bohemian Vera neighborhood in late 2014. While the hotel quickly established itself as a go-to for design-savvy international visitors to Georgia, its chilled-out bar is equally popular with local scenesters who gather on the small terrace nightly to sip creative cocktails developed by mixologists from New York City.

Insider Tip: Rooms has another outpost in Kazbegi, at the foothills of Mount Kazbek, both run by the same hospitality group as Fabrika, a hostel/event space housed in a Soviet-era sewing factory in Tbilisi.

If those elaborately decorated ceiling frescoes pique your interest, head  to Old Tbilisi. While wandering the district’s labyrinthine network of narrow streets and twisting alleys, particularly around Lado Asatiani, peek into a few of the buildings where the entrance halls are still adorned by beautiful, though steadily crumbling, frescoes. If you’re (understandably) hesitant to wander unannounced into private buildings, pick up a copy of the book Tbilisi Entrance Halls, or check its Facebook page to guide your way. 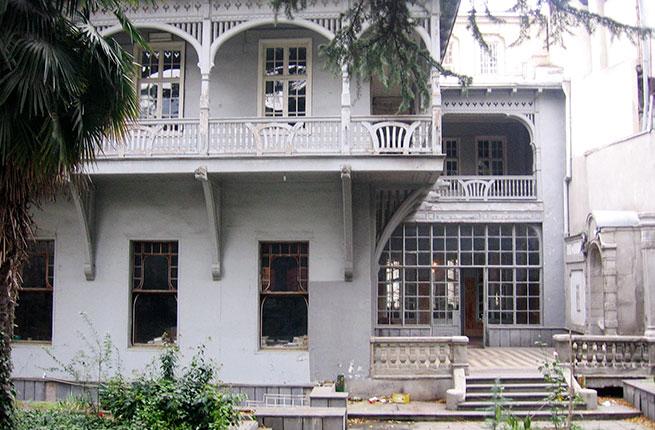 While in Old Tbilisi, visit the Art Nouveau Writer’s House, built in 1903–1905. During the Soviet era, intellectuals and writers who were approved by the authorities gathered here to drink and debate. The house was the scene of several dramatic events, including the suicide of the famed Georgian poet Paolo Iashvili; today it functions as a cultural center and event space, often hosting exhibitions and talks by the contemporary Georgian literati.

Insider Tip: There is a café, named Littera, toward the back of the building offering al fresco seating in the charming courtyard and an internationally influenced menu.

Tbilisi’s fashion scene was heating up even before native son Demna Gvasalia was named creative director of Balenciaga in late 2015. Since 2009, the city has held its own Fashion Week, and it is earning increased attention from the world’s fashion press. If you are looking for local designers with a uniquely Georgian angle, start with Irma Sharikadze and Dalood.

Dalood, whose store is a short stroll from Rooms Hotel, is noted for embellished pieces. The label memorably showed a jacket featuring script from The Knight in the Panther’s Skin, Georgia's most famous epic poem, as well as accessories designed to look like letters from the singular Georgian alphabet. Sharikadze makes use of floral crowns, rich colors and tiered ruffles, most immediately recalling Frida Kahlo but also influenced by the primitive style of Georgian painter Niko Pirosmani and the imagery of Soviet-era Georgian film director Sergei Parajanov. 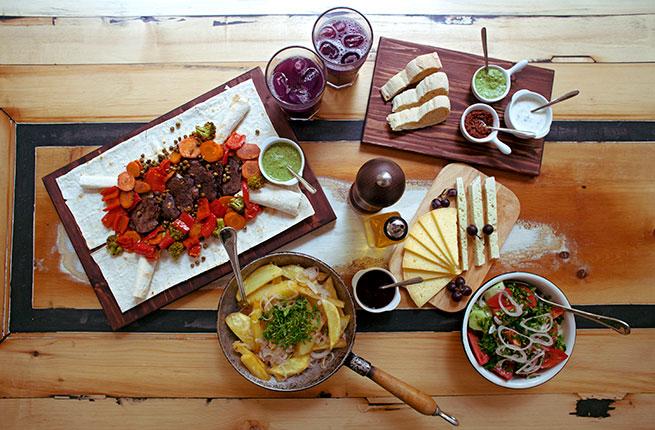 The courtyards of Tbilisi were once essential spaces in Georgian life where families and friends would gather and socialize. Today, however, life is fast disappearing indoors to sit in front of computers and televisions, and the neglected courtyards are vanishing. Still, you can get a sense of earlier times at Ezo Restaurant, an organic eatery occupying a 19th–century Italian courtyard in the Soloaki district. The restaurant is highly innovative in its field, focusing on organic produce and developing sustainable organic farming in Georgia, but comfortingly serves dishes based on old family recipes and from the cookbook of the 19th-century Georgian feminist Barbara Jorjadz. 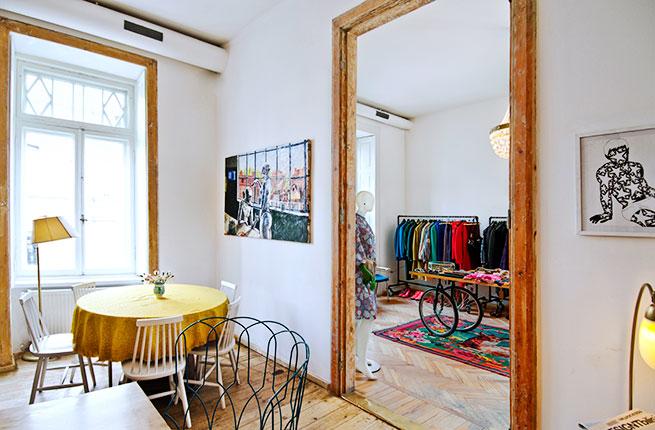 Tucked away on a back street in Vera, O Moda Moda is a breezy coffee shop-cum-boutique. The boutique part of the equation showcases work by local designers alongside vintage pieces. The coffee shop is a popular hangout for brunch and the small garden space is a quiet spot for drinks. Try the classic Georgian soft drink, laghidze, not commonly found in restaurants anymore.

Insider Tip: The owner is a designer herself and is responsible for the delightful Grand Budapest Hotel–style uniforms worn by the staff of Rooms Hotel.

Housed in lovingly converted 19th-century homes, a visit to Tbilisi’s art cafés is a delight. Often hidden away off the main drags, and each one decorated to its own distinctive style, art cafés are a sure bet for meeting locals and for conversation that continues deep into the evening as coffees are switched for cocktails. Many of these cafés have a decidedly homely feel, particularly the floral-patterned interiors of Pur Pur, and Art Café HOME, where dried peppers, pages from old Georgian texts, and artwork by the owner’s father all vie for space. 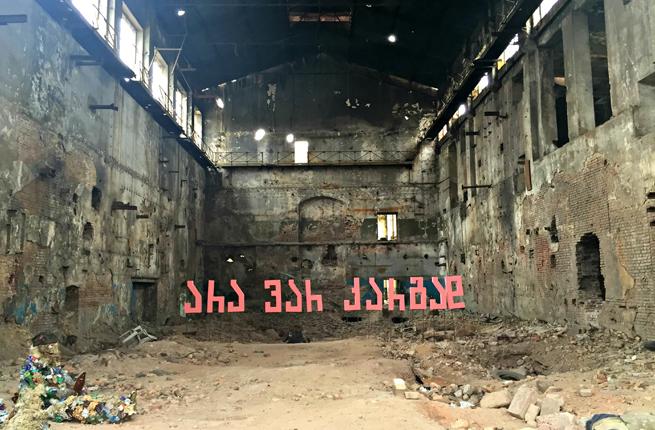 ArtArea is a contemporary art gallery that hosts regular exhibitions and events. Occupying an abandoned Soviet-era power station, the sprawling—occasionally apocalyptic-looking—space makes for a suitably evocative backdrop for installations by up-and-coming Georgian artists. ArtArea has also previously hosted a “moving gallery” from the online platform Project ArtBeat, which supports Georgian contemporary art by promoting it internationally and exhibiting in remote areas usually ignored by the art world.