Within the compact boundaries of this capital city of the Dordogne Department, you can time-travel from Gallo-Roman times through the Middle Ages and on to the Renaissance era all in one day and all on foot–just stop at the Tourist Office to pick up the illustrated walking-tour map of the town (in English) and start your stroll through 17 centuries of history.

Open-air marchés, dozens of gourmet shops and a roster of excellent restaurants make the city a hard-to-beat gastronomic experience. An added enticement is the 21-km Voie Verte (Green Way), a tree-lined walking and biking trail following the curves of the L’Isle River. Great food, inspiring architecture, and a chance to walk around are just some of the reasons why Périgeux should be your next French vacation.

Insider Tip: You’ll win French friends by learning how to pronounce Périgueux properly. The final x is silent and the Péri part is fairly easy: just say pear-ee. The “gueux” is the killer. It’s a hard g followed by something between a sharp, descending “goo” and “guh.” Good luck! 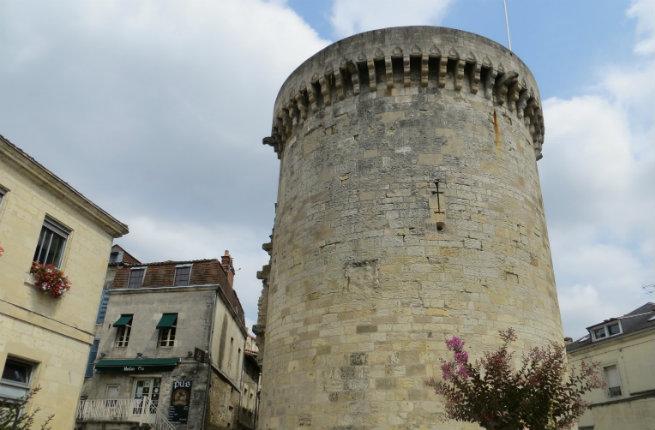 The 15th-century Tour Mataguerre is an impressive remnant of the defensive wall that once encircled the medieval city. The winding streets behind the tower are mostly medieval with some impressive fortified residences complete with towers, such as the 15th-century Labzac de Ladouze residence on Rue Aubergerie. 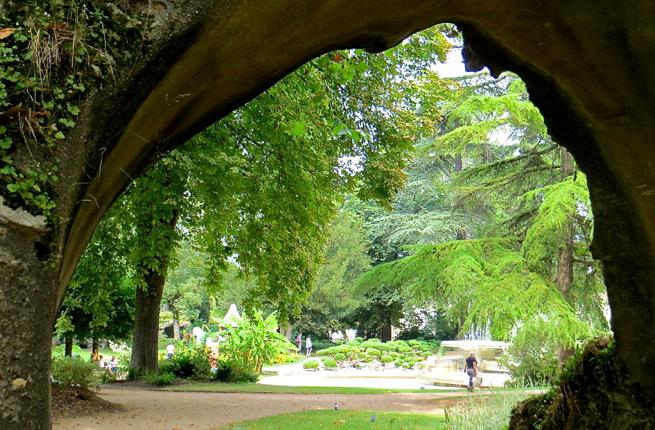 Alongside the museum rises the 90-foot circular tower of Vesunna Temple, devoted to the town’s eponymous Gallo-Roman goddess. A five-minute walk along a former Roman road takes you to Les Arènes, a Roman amphitheater that once held 20,000 spectators. Today it’s the city’s lush public garden, rimmed by remnants of the arena walls and honeycombed with arched entryways. Settle onto a park bench in the shade to enjoy the scene of splashing fountains amid exotic landscaping, and watch children at play where gladiators once battled. 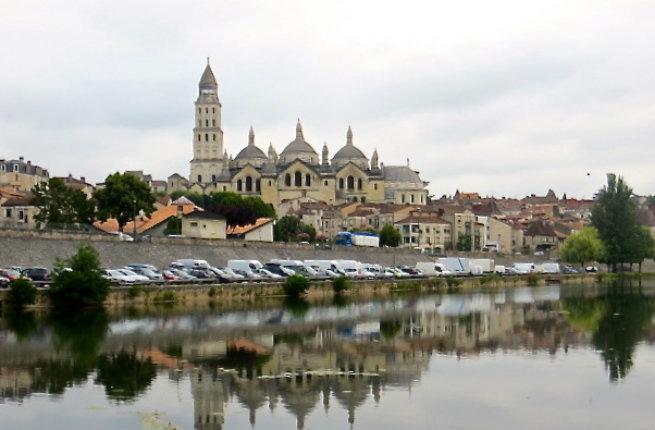 The city’s impossible-to-miss centerpiece is the UNESCO-classified Catédrale St. Front, topped with five cupolas. If you think it looks familiar, it’s because it was the model for Montmartre’s Sacre Coeur, built more than six centuries later. The soaring bell tower dates from the earlier Romanesque church, but the bulk of the 12th-century cathedral is pure Byzantine basilica, laid out in a Greek cross. The cool, dark interior is barely lit by two huge, ornate black-and-gold candelabra that once hung in Notre Dame in Paris. 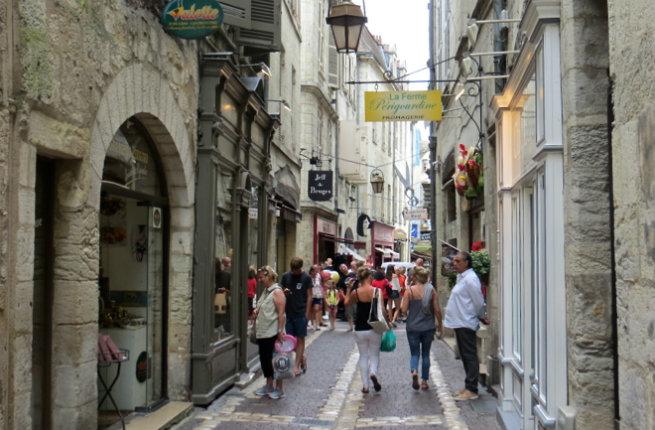 Fast-forward from medieval times into the Renaissance among the narrow, winding lanes of the Vieille Ville. There’s a photo op at every turn as you follow the walking-tour map to notable buildings designated with informative historical plaques. Although the restored stone buildings look like museum pieces, most are elegant residences or offices. More Renaissance beauties are scattered around the town center, notably the Maison du Pâtissier in St. Louis Square. Now a clothing store, the preserved, angled doorway is a masterpiece of Renaissance stone carving.

Foie Gras and Other Gourmet Delights 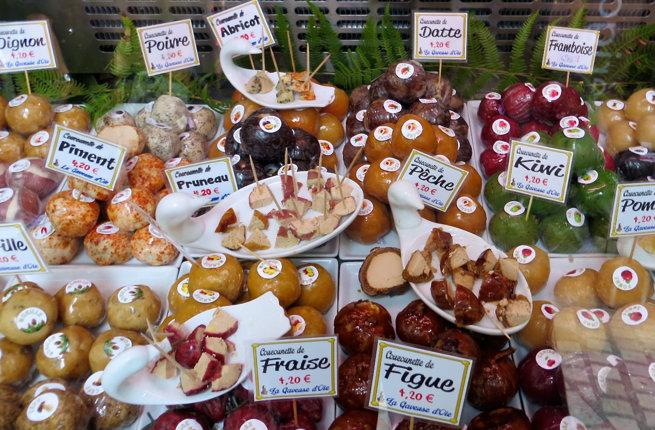 Narrow, cobble-stoned Rue Limogeanne, a feast for the eyes and the palate, with dozens of elegant shops devoted to the medieval sin of gluttony. Pâté de foie gras du Perigord (flecked with truffles) is the local specialty, which you can sample at stalls piled high with pâté-stuffed fruits, ready to pop into your mouth. Along this tantalizing street, you’ll also find no less than six artisan chocolatiers, three pâtisseries, a traditional fromagerie and a dozen or so shops showcasing other fine comestibles: wine, coffee, tea, oils, and spices.

The street feeds into Place du Coderc, which bursts into life Wednesday and Saturday mornings with a colorful outdoor marché. The market atmosphere continues down even narrower Rue Salinier, which spills out into a large outdoor market in Place de la Cloture, in the shadow of the cathedral.

Pick up the makings for a picnic at the market or go all out gastronomically and reserve a table at Périgueux’s premier, Michelin-starred restaurant: L’Essentiel. Try the foie gras here, delicately cooked in its own fat and freshened with a light mango and ginger sauce. Weekday, three-course lunch formules are the best option (from $32). If the weather is fine, a table on the garden terrace is unbeatable for romance.

Going Green On Foot or Vélo 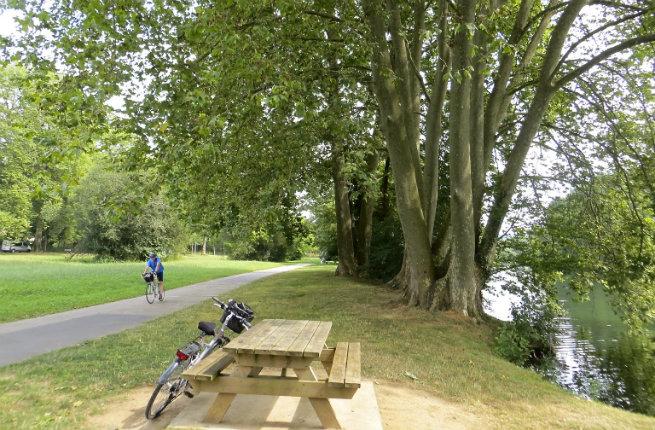 Work off your gourmet indulgences with a walk or bicycle ride along a section of the 21-km Voie Verte, a “green way” along the River L’Isle. The most scenic section of the trail is directly across the river from the cathedral. From the cathedral entrance, just follow curving Avenue Daumesnil down to the bridge, the ideal vantage point for shots of the Cathedral, and join the paved trail on the other side of the river. Walk/bike the trail in either direction, catching glimpses of the cathedral and ancient town center through a screen of weeping willows.

The path widens out beyond the city limits, turning to fine gravel or packed soil. You’ll go over and under various pedestrian bridges, always following the river, eastward past wide-open park spaces and pretty residential areas. To the west, you’ll ride along a tree-shaded canal and a golf course. Bring along a picnic lunch from the market to enjoy at a riverside table and save some leftover bread to feed the ducks gliding amongst water lilies and river grass. If you haven’t brought your own bike, you can rent one at the western end of the trail from the Giant Store in the commercial complex in Marsac sur L’Isle, where you can also park your car.