Cocktail culture in Paris tends to ebb and flow. Cocktails, an American invention, started to crop up in Paris in the early 20th century. There are even a few notable cocktails that were first created in Paris, like the French 75 (purportedly named for a French cannon from the First World War) and that old brunch go-to, the Mimosa. In the early 2010s, tiki bars were the new fad in Paris, and most of the good ones are still around, but I was in the mood for something new on my January 2022 visit.

I noticed a new trend emerging in some of the luxury hotel bars: cocktail menus tightly structured around a central theme. A few I found on my own, while others were expertly suggested by Mathilde, the concierge at the Mandarin Oriental, Paris. At Bar Josephine at Hotel Lutetia in the Left Bank, the menu is populated by cocktails inspired by the bar’s namesake, the American-born singer and activist Josephine Baker. The “J’ai Deux Amours” cocktail (made with mango and barbecue sauce, if it can be believed) pays homage to her famed lyric, “I have two loves, my country, and Paris.” Another fascinating sip is modeled after the Jazz Age romp, “You’re Driving Me Crazy” and is mixed with Tanqueray, apricot, plum vinegar, chamomile, and Chartreuse.

At The Ritz Paris, the storied Bar Hemingway seems to get much of the attention, serving up classic cocktails, but the more inventive menu is at the Ritz Bar next door. Here, the signature menu of 12 cocktails draws inspiration from the zodiac signs. For Taurus, the drink appropriately draws on the sign’s love of the finer things with the “Épicurien,” a mix of Blanche Armagnac, vermouth, white cocoa, and gentian bitters, decadently capped off with a truffle slice.

There’s something nice about a structured mixology menu like these. They turn the bar into more of an experience, complete with storytelling and a sense of place. And so what if they’re all in five-star hotels frequented by other visitors—these iconic hotels are as much a part of the historic fabric of Paris as any other landmark. It was at the gorgeous Hotel de Crillon, A Rosewood Hotel on Place de Concorde where I discovered the menu that reads like a love graffito to Paris. Parked on a plush chaise under the soaring frescoed ceiling in Bar Les Ambassadeurs, feted by the smooth sounds of the bar’s all-female resident jazz troupe Les Ambassadrices, our charming server clucked us away from scanning the QR code on the table.

“You won’t need that,” he purred, before laying down an illustrated map of the city, punctuated by figures of the city drawn from offbeat landmarks or street art: a five o’clock shadowed Serge Gainsbourg, a masked woman, and a winged cat seemed to beckon patrons to discover their secrets. 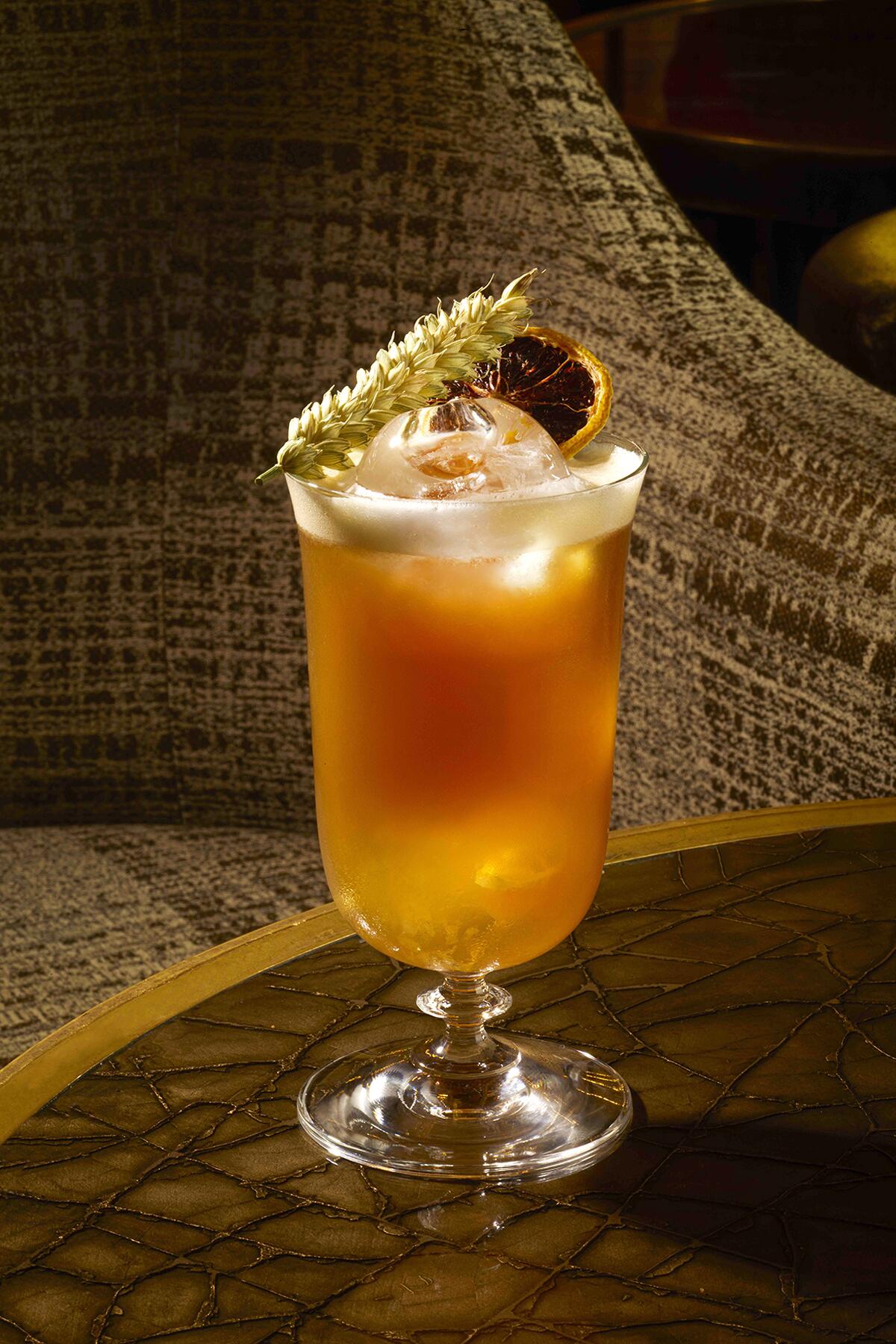 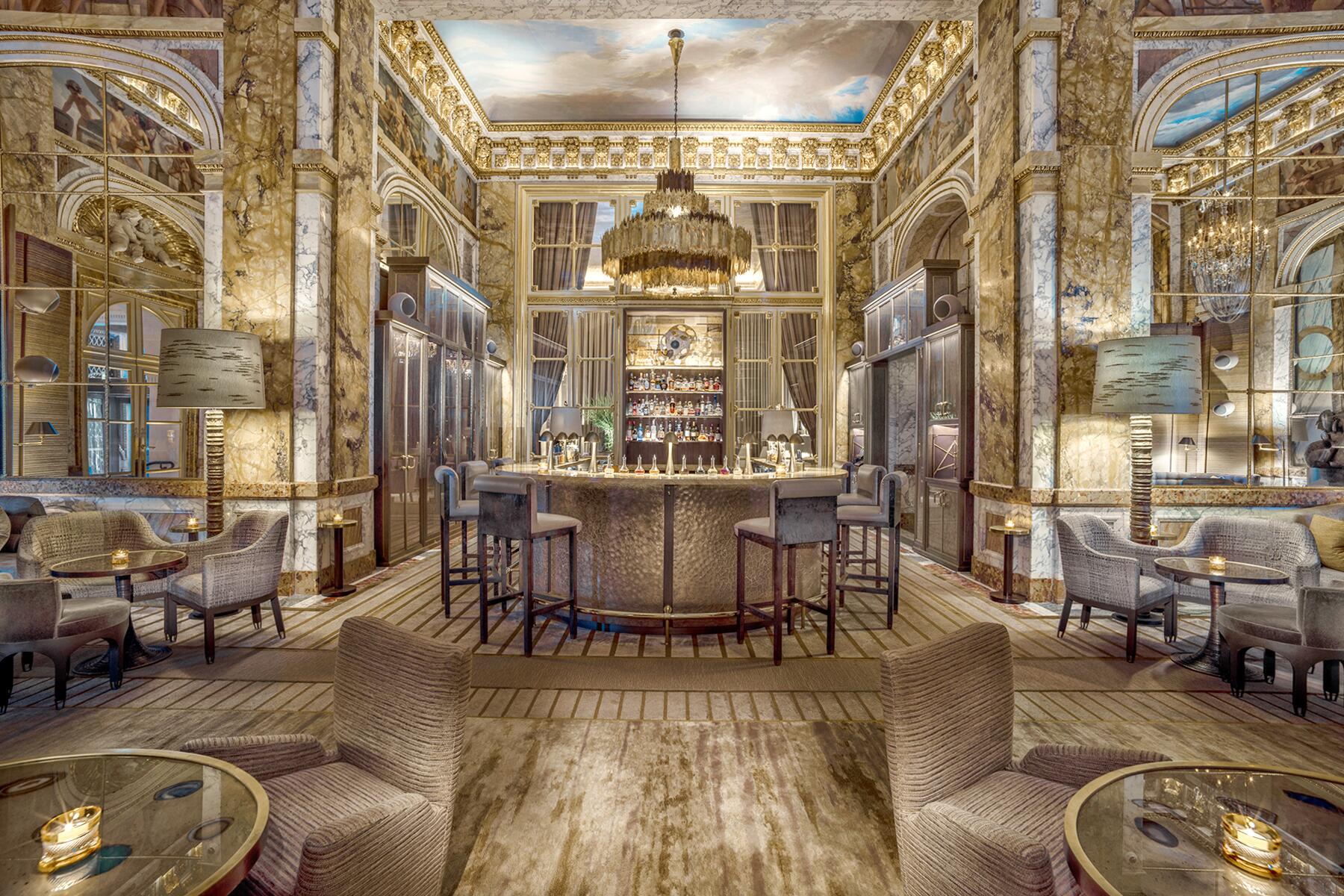 The winged cat is the “Chat Perché” or Grinning Cat cocktail, and I’m drawn in by the promise of Bols Passionfruit liqueur. It’s mixed with Dalmore 12-year-old Scotch and the vaguely described “Superfood” (goji and açaí berries, guarana, and green tea) into a clarified milk punch, which is silky smooth, clear, and served around a single large Crillon-monogrammed ice cube, garnished with a cape gooseberry.

The Chat Perché is an homage to the popular Monsieur Chat street art—a grinning yellow cat that appears throughout Paris, prominently in Le Marais. The Superfood blend is meant to represent the popularity of health food restaurants in the neighborhood. It’s eminently drinkable and by the end of it, I was easily ready for another, despite the €27 price tag.

The inspiration for the next “Padam” cocktail comes from Belleville, indicated by a drawing that is easily recognizable as famed Belleville chanteuse Édith Piaf, described in the menu by her most famous French nickname as “La Môme de Belleville.” The inspiration here is street art by Manyoly on Rue Denoyer, which is virtually covered in it. The mixology incorporates Avion silver tequila, Apricot, grilled sesame, and citrus.

The masked woman on the west side of Paris is “Selina,” inspired by the work of Liz Art Berlin’s Catwoman, and the status of Alexandre Dumas—“playful and provocative” like the characters created by both artists. The drink is made of Squadron D-Day Vodka, apple, saffron, and rhubarb, and capped with a disk containing the illustration itself. Other cocktails on the menu include the Napoleon-inspired “Effendi,” and “Couleur Café,” drawing on artist Serge Gainsbourg’s love of coffee and whiskey.

It’s a charming notion to come to Paris, sit comfortably in a gorgeous hotel bar for a drink, and get a mini-epic of Paris to take away to explore on your own later. I was almost tempted to wander off to Belleville or Le Marais that very night to seek out the street art and the landmarks—but that could’ve just been the cocktail talking.

Whether it’s a peep at the city’s street art, a sip and a ponder of my own zodiac sign, or a moment spent in cocktail communion with an American ex-pat destined to become one of France’s most celebrated daughters, I’ve now got Paris stories of my own to fondly remember, courtesy of these inventive cocktail menus that stand out in a city already famed for its relentless stream of inspiration.

Want a Taste of Paris? Check Out These Cocktail Recipes

How to Make it:

In a cocktail shaker, add the cognac, manzanilla, honey syrup, lemon juice, and aquafaba. Shake well for 7 seconds. Add the porter to the mixture and shake. Place the ice ball in a tumbler and pour the mixture over it, filtering it with a cocktail strainer. Garnish with an ear of wheat and a slice of dried lemon. Serve.

How to Make It:

In a mixing glass, add the whiskey, Montenegro, Madeira, maple syrup, and bitter. Mix for 20 seconds. Pour the mixture into a digestive glass. Garnish with a skeleton leaf and serve.