Our Ultimate Guides typically show you the best things to do in a city, but quite frankly, we had to make a few changes since the only place you're traveling to is...the kitchen.

Until we can travel again, we’ve got to get a little innovative. You can’t go to Paris right now, sure, but you can certainly bring Paris inside your house, combining a little bit of creativity and online delivery service. So, open up some new tabs on your laptop, friends–it’s time to online shop, travel virtually, and–most importantly–get a little Parisian. Here is our Ultimate Guide on how to spend an evening in Paris from inside your home. 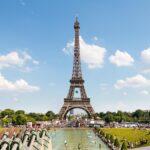 RELATED STORY
25 Ultimate Things to Do in Paris 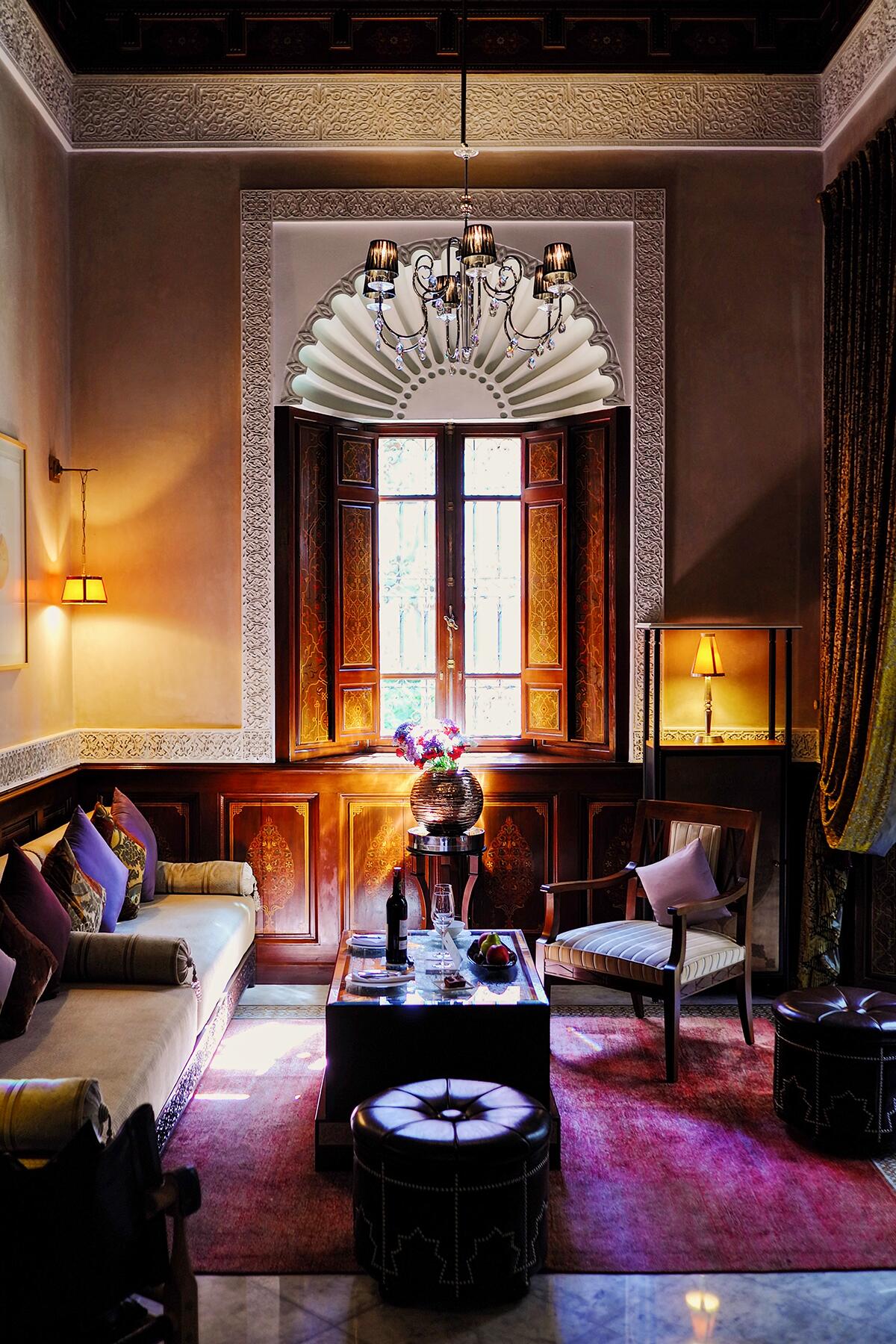 Set the Scene: Decorate Your Space

To prepare for a Parisian evening inside of your home, you might want to set the scene a little bit. To do this, your best bet is to head on over to Etsy and take a look at all of the lovely Parisian-themed decorations from delicate tea lights to lace doilies. These shabby-chic wall hooks are darling, as are these vintage prints of Notre Dame Cathedral from 1889.

A quick, simple search of “Paris decor” will bring you, honestly, a lot of products–or, perhaps, provide you with inspiration to craft your own DIY decor items (like these wine bottles decorated with fairy lights and Eiffel Tower art). Can’t afford (or have space for) an actual chandelier? Me neither. Why not just have a gigantic photo of one instead, then? That’s much more doable, in my opinion. 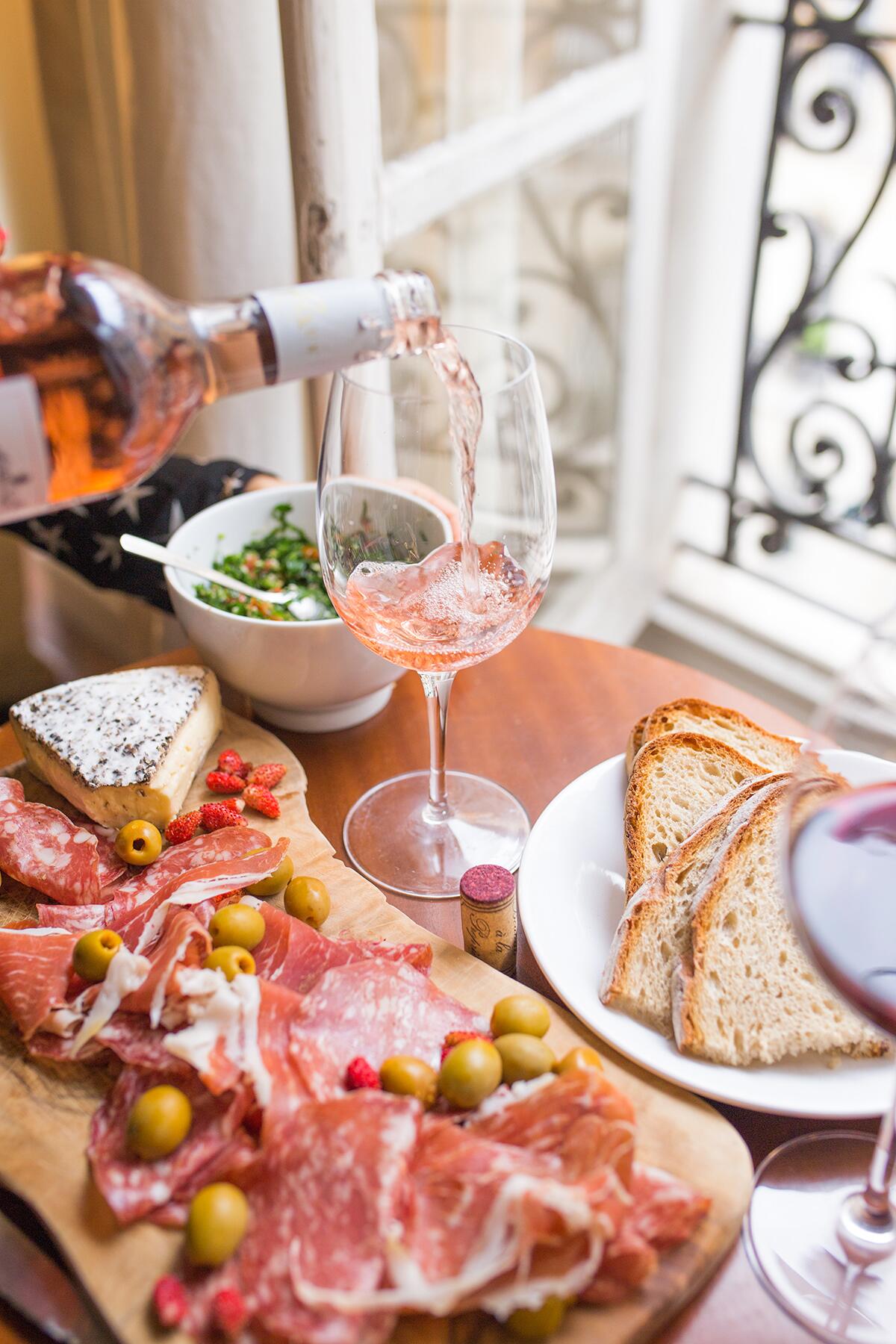 From quaint cafes to Michelin-starred restaurants, the dining scene in Paris is the epitome of *chef’s kiss*, so why wouldn’t you want to bring it right on into your home? Inspired by these classic cafes and bistros, we begin with the basics: sweets and pastries. Make your own by ordering supplies online, but do note that delivery times for anything you order online right now will probably take longer than usual, so it might be best right now to stick to obtaining these foods via takeout and delivery options in your town.

For example, in Los Angeles, you can order delivery and takeout from a local French restaurant or bakery–La Creme Cafe offers crepes, and Meet in Paris Bistro has everything you could possibly want (the French onion soup is incredible). Or, you can pretend you’re having a meal at Chef Yves Camdeborde’s impossible-to-get-into Le Comptoir du Relais, and order yourself a baguette and charcuterie plate of meats and cheeses to start, followed by a main of open-faced Croque monsieur, and an assortment of pastries for dessert. 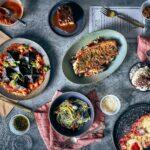 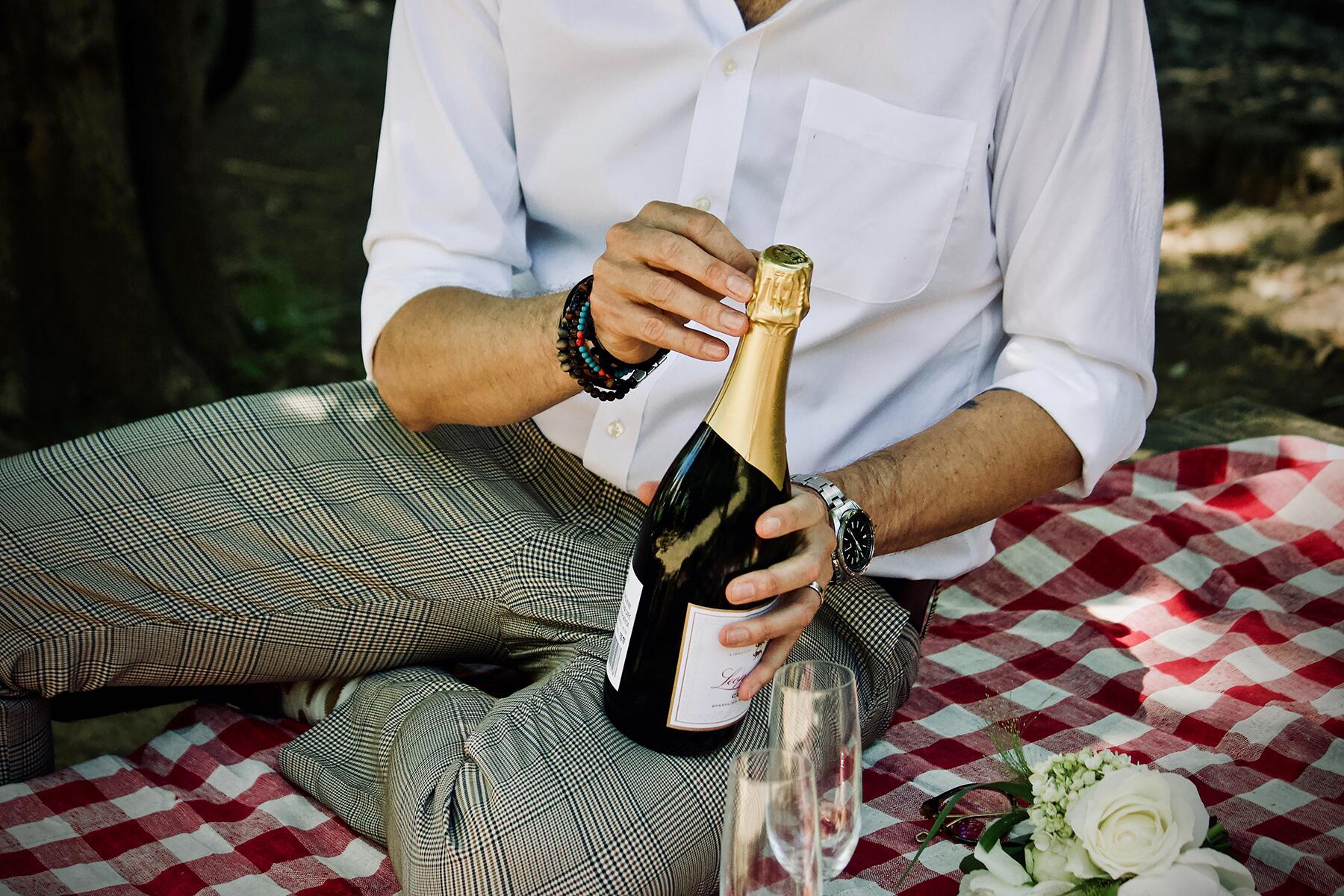 You’re not going out to any swanky bars, so you gotta bring the swanky bars to your living room. Your essential Parisian drinking guide for the evening begins with the most necessary of ingredients: champagne (which can be ordered online or, let’s face it, purchased at the gas station or drugstore across the street from your apartment). Now, you can drink that champagne straight or get a little fancier by concocting your own Kir Royale, a French cocktail consisting of crème de cassis topped with champagne. If you’re more of a beer person, pick up a six-pack of Kronenbourg 1664. And if liqueurs are more your jam, pick up a bottle of Pernod Absinthe or Pernod Anise, by French company Pernod Ricard. 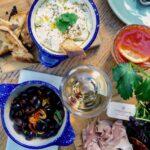 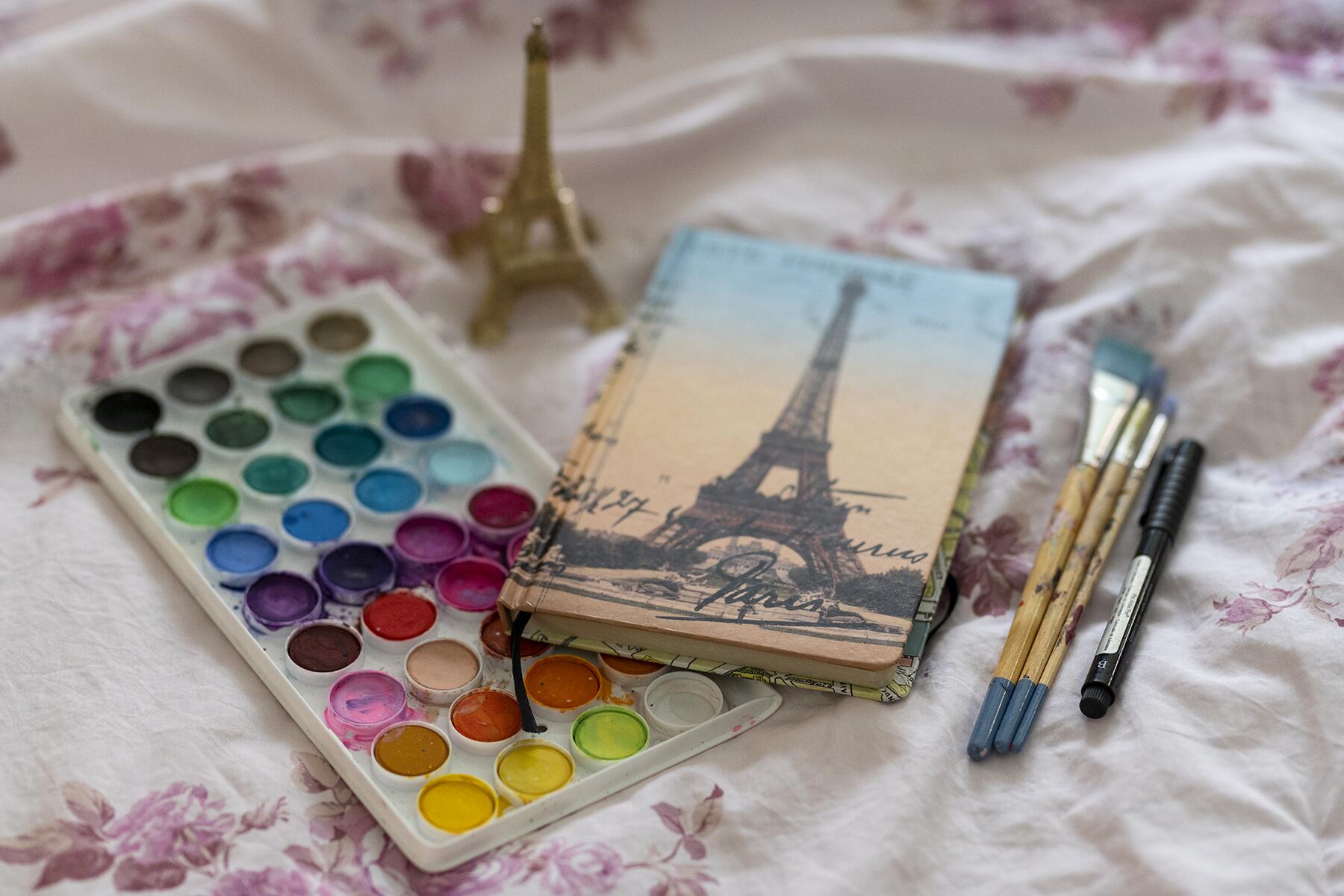 Artists have been flocking to Paris for hundreds of years, so if you’re having a Parisian night in, you might as well let your inner artist out. That could mean different things for different people, depending on what you’re interested in–playing a musical instrument, drawing, painting, writing, poetry. You don’t have to be good at it, as long as you’re having a good ol’ time. But I mean, bonus points if this helps you discover your true calling in life–good for you!

At the very least, pick up a journal with the Eiffel Tower on it to write your feelings in–they are easy to find, as at least 30% of all journals in existence look like this and are available almost everywhere anything is sold.

INSIDER TIPMaybe the artist in you is more about supporting local art. Independent artists and creatives are suffering right now. If you can help them with donations or purchasing their work, now is the time to do so. 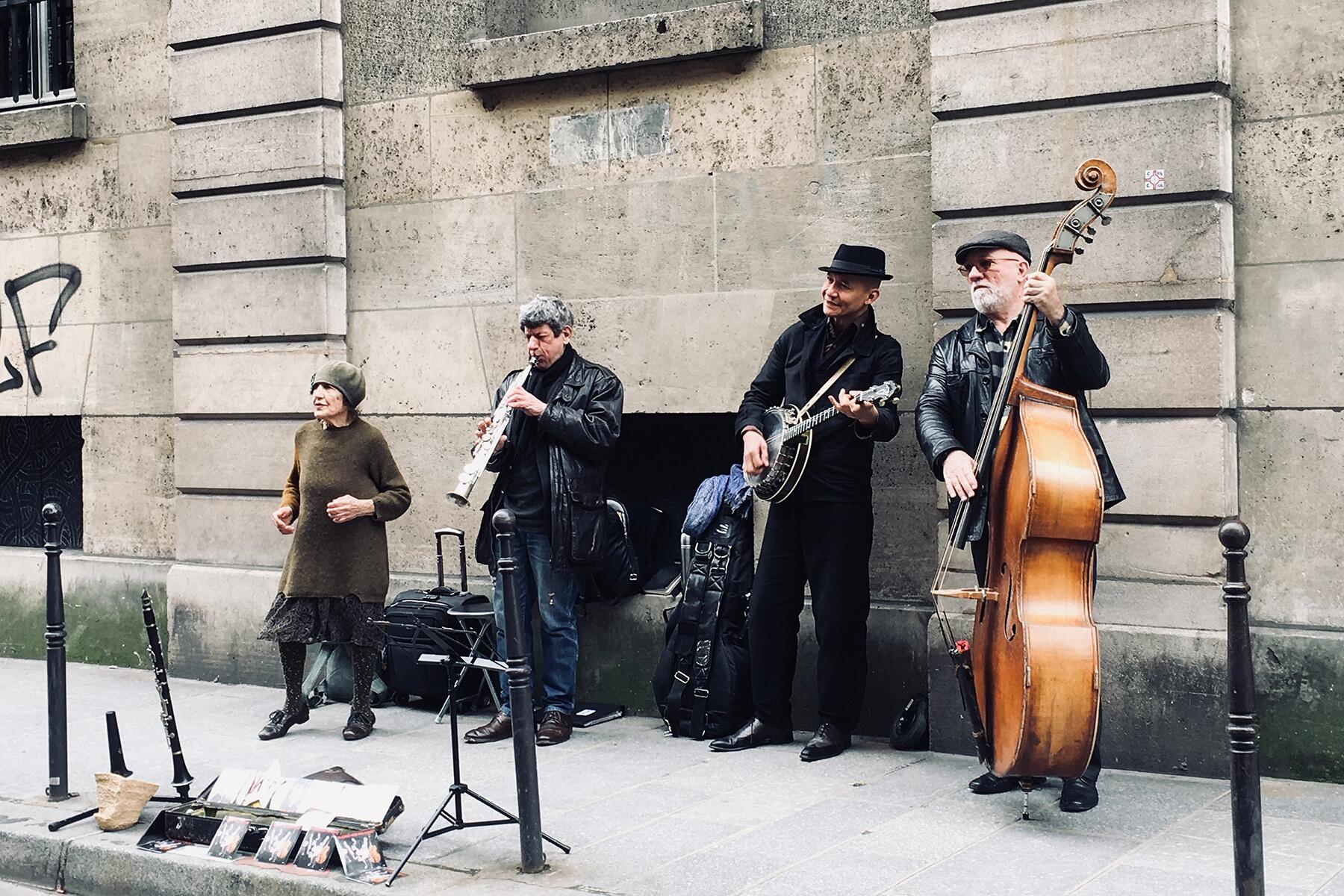 Bring the Music of Paris Inside Your Home

It’s easy to find a playlist curated with particularly Parisian songs–for example, this one is available on Spotify. However, if you’d like a more customized playlist, here’s one that I’ve created just for you: 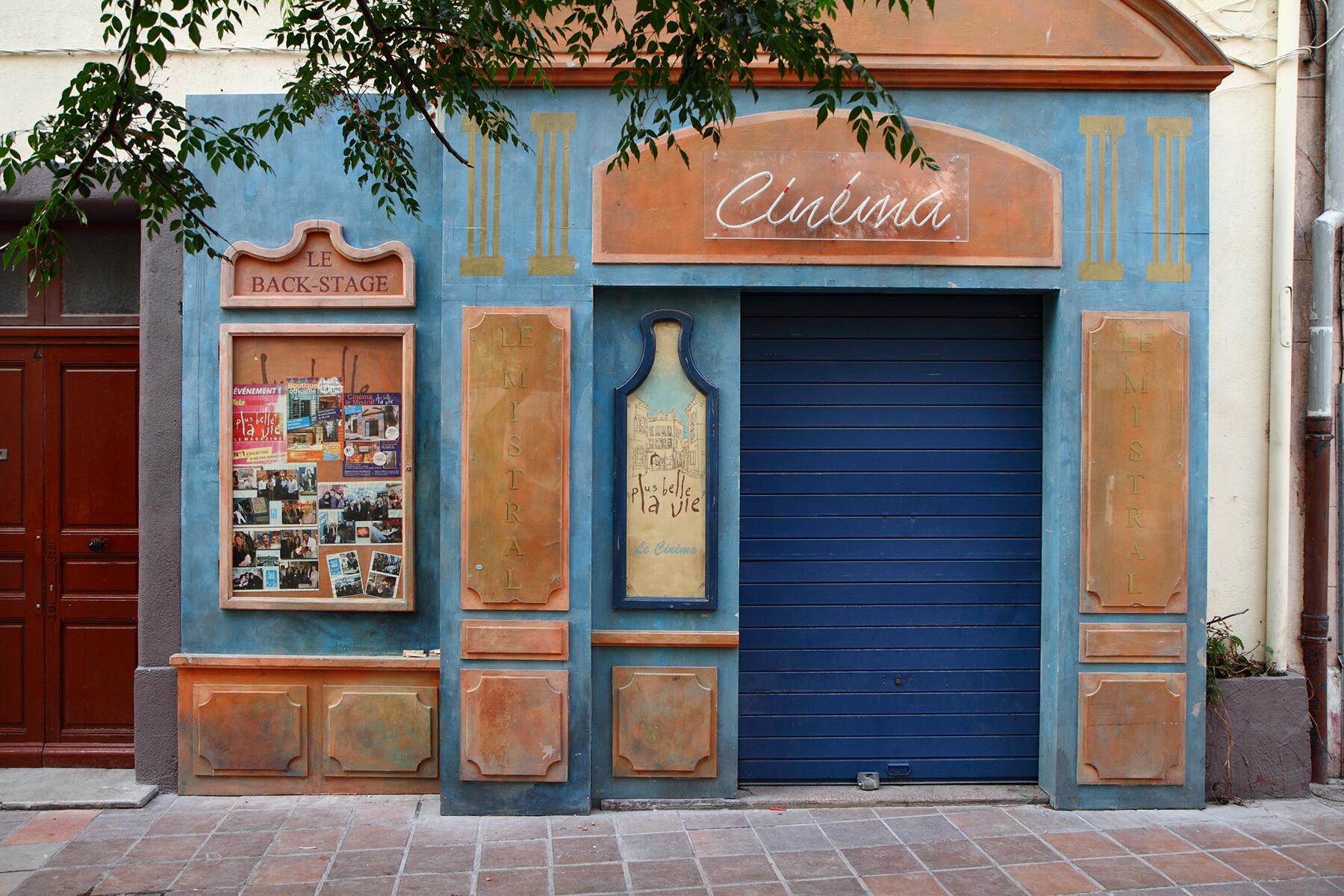 Have a Parisian-Themed Movie Night

There is no shortage of movies showcasing the beauty and grandeur of Paris, and since you’re home all the time now, you’ve got time to watch all of them. No matter what genre of film you prefer, you’ll surely find something here.

Want a huge, dramatic dose of musical romance and forbidden love? Transport back to 1889 Paris via Moulin Rouge! and watch an English songwriter fall for a courtesan promised to a wealthy duke. In the lighthearted Amelie, a young French woman discreetly manipulates the worlds of everyone around her. Both 1954 and 1995 versions of Sabrina are must-watches (despite not actually being set in Paris throughout the whole movie, Paris is one of the main factors of Sabrina’s personal growth). Liam Neeson sprints through Paris searching for his daughter in 2008’s Taken. In Le Divorce, Naomi Watts is a poet living in Paris who refuses to give her cheating husband what he wants (hint: it’s a divorce). In La Vie En Rose, Édith Piaf (Marion Cotillard, who won an Oscar for this role) is born into poverty and raised in a brothel and grows up to become a very famous singer. And don’t think for one moment I’ll leave out the classic Gigi, the 1958 American musical-romance where a playboy and a young woman who refuses to be a mistress become close–what will happen? Will he choose her over his playboy lifestyle? Well, I guess you’ll have to find out when you watch this movie during your big Paris-inspired evening inside, won’t you?

Have no attention span? Me neither. Watch Paris, I Love You, an anthology-like collection of 18 vignettes set in Paris. Hugo, Ratatouille, The Aristocats, Anastasia, and The Hunchback of Notre Dame are good choices for children young and old (as well as for adults). Oh, and just so you know, Passport to Paris, starring Mary Kate and Ashley Olsen, is available on Hulu.

INSIDER TIPAs a special TV bonus, I suggest watching that one season of The Hills, where Lauren Conrad finally goes to Paris with Teen Vogue for Paris Fashion Week–finally, she made it! Sorry about the spoiler. 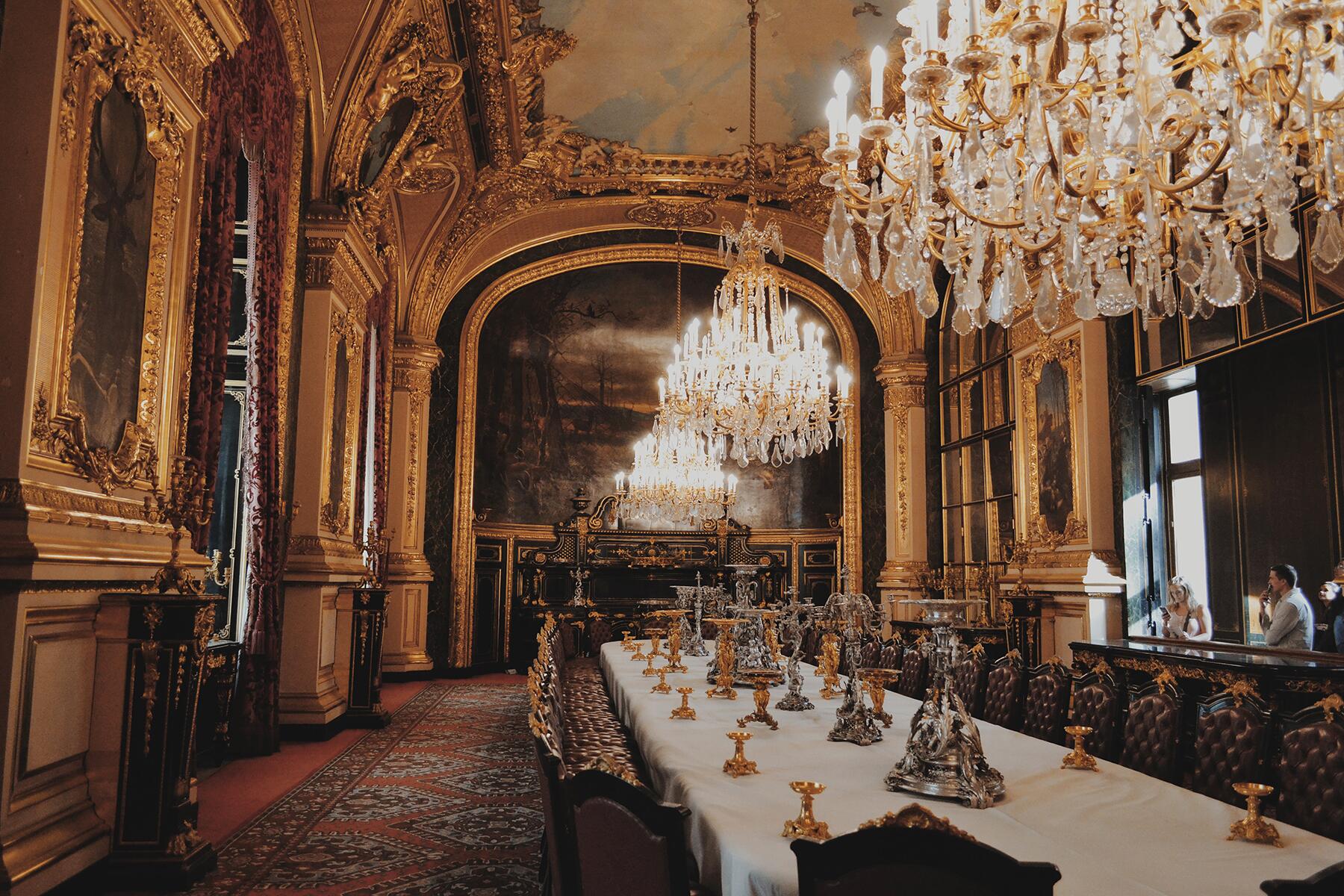 Art museums all over the world have shuttered their doors, for now, but that doesn’t mean you can’t wander the museums’ galleries from your home (and perhaps in your pajamas). The Louvre has several virtual galleries on view via their website, including Egyptian Antiquities (collections from the Pharaonic period) and a special exhibition in the Petit Galerie called The Advent of the Artist featuring artworks by Delacroix, Tintoretto, and Rembrandt. You can also take a tour of a more medieval Louvre with Remains of the Louvre’s Moat, which is a virtual trip back in time to when the Louvre was once a fortress with a perimeter moat surrounding it, built to aid Paris’s defense from attacks via the Seine River. The fourth virtual tour is one of the Galerie d’Apollon, which was destroyed by a fire in 1661 and then rebuilt. It has recently been restored and features quite a magnificent ceiling with a central panel of Apollo Slaying the Serpent Python by Delacroix.

The Louvre isn’t the only Parisian museum offering virtual tours. Musée d’Orsay is also offering a way to virtually walk through the museum and view Impressionist and post-Impressionist collections, as well, including the works of Monet, van Gogh, and Cezanne.

RELATED STORY
The Louvre 101: Everything You Need to Know About Visiting the World’s Most Popular Museum 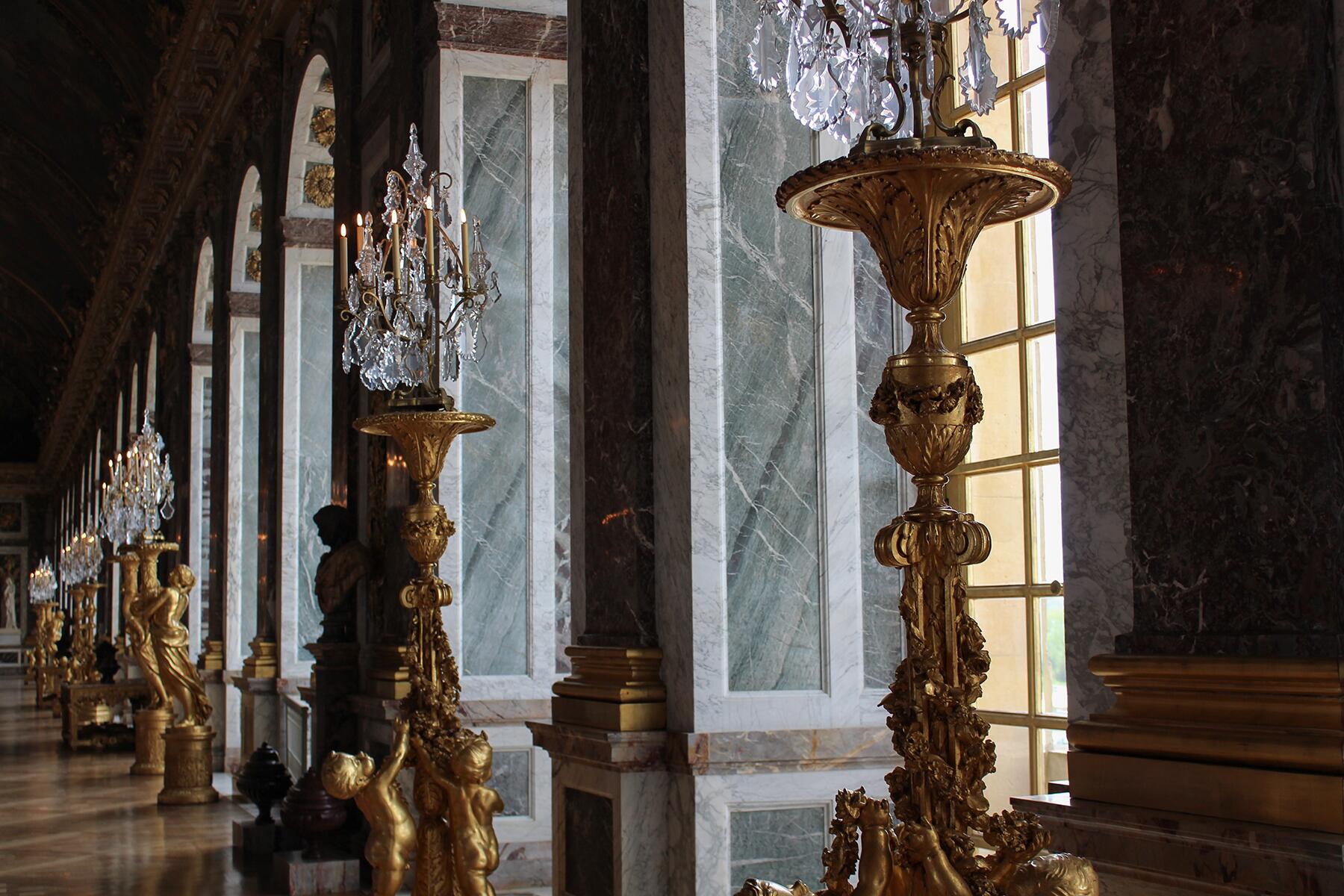 If you tire of the beautiful museum tours, then it’s time to move on to the virtual tours of Paris’ beautiful palaces and gardens. The Palace of Versailles has opened its (digital) doors to the public, allowing visitors to virtually tour nearly every inch of the grounds, including the famously gorgeous Hall of Mirrors and many, many luscious garden areas. You can also take an unofficial virtual tour of the Jardin du Luxembourg for some choice 360-degree Parisian garden views. 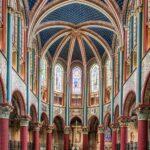 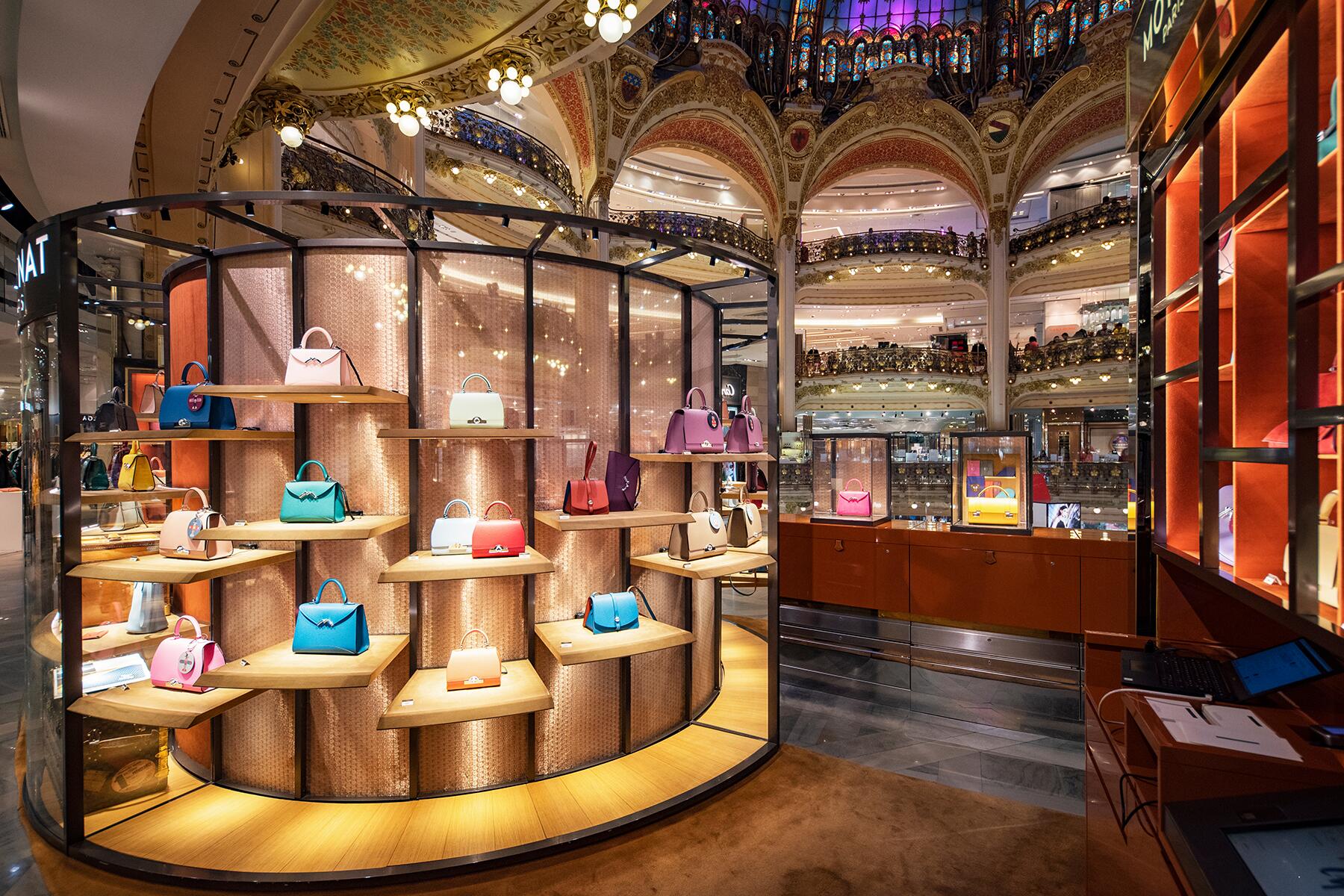 You may not be able to wander the streets of Paris carrying a million shopping bags like some sort of heiress on her birthday right now, but you can certainly help the Parisian economy by visiting the (currently closed) shops online. Browse famous French department stores online, like Merci, Nous, Galeries Lafayette, and Le Bon Marche (which, right there on their website, guarantees delivery “with appropriate levels of sanitary safety”). Whether you’re just doing some digital window shopping or have the means to go wild and buy a whole spring wardrobe that you may or may not get to wear outside anytime soon, the department stores of Paris have you covered. 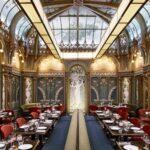 RELATED STORY
Ultimate France: The 30 Things You Have to Do Before You Die 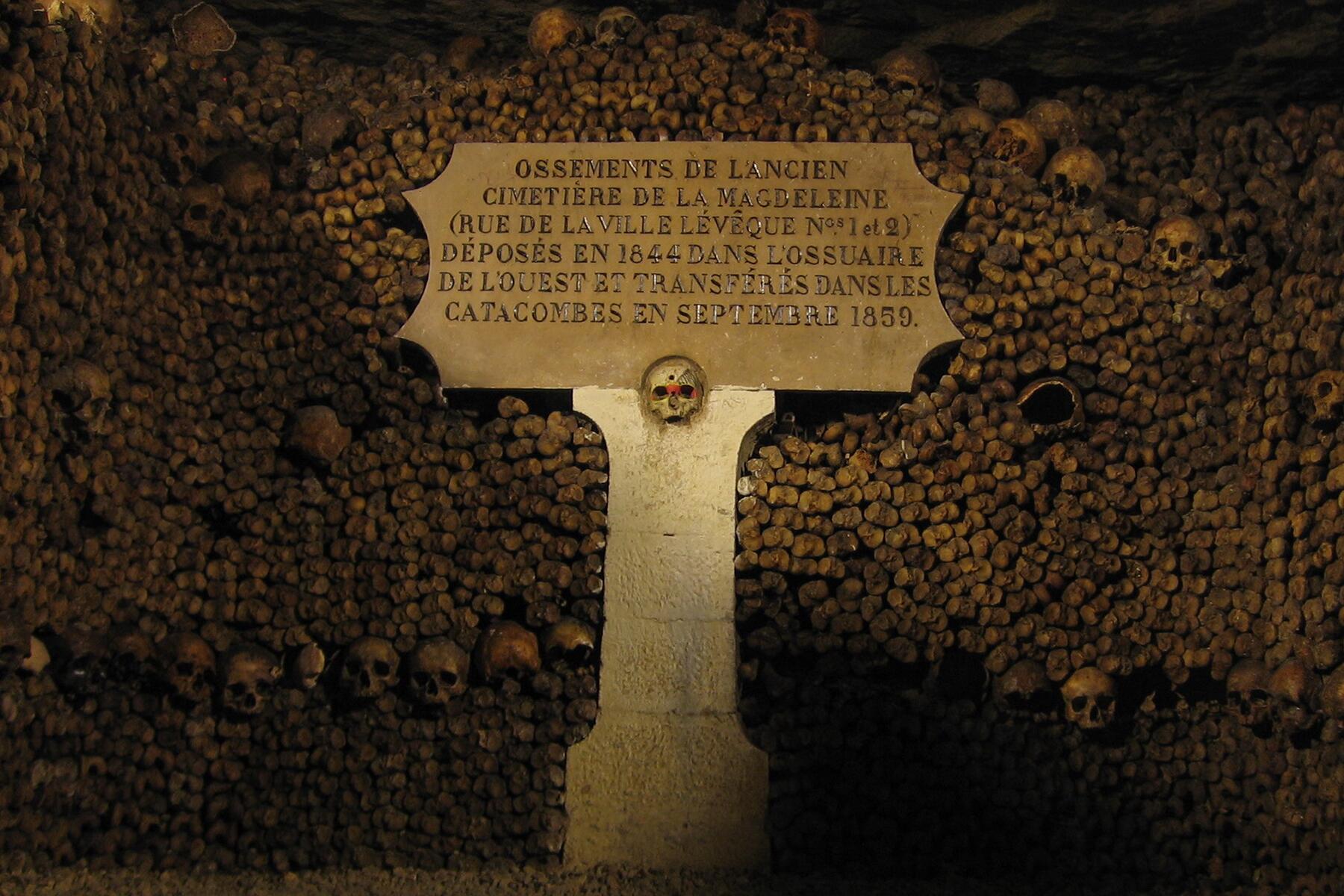 Get a Little Morbid

Are you sick of the beautiful Parisian museums, palaces, and gardens and are, perhaps, feeling a little morbid? Weird, me too. In that case, journey inside the creepier parts of Paris by taking a virtual tour of the Catacombs of Paris, and when you’re all done there, turn the lights off in your apartment, light a few candles, and take a virtual tour of Père Lachaise Cemetery. 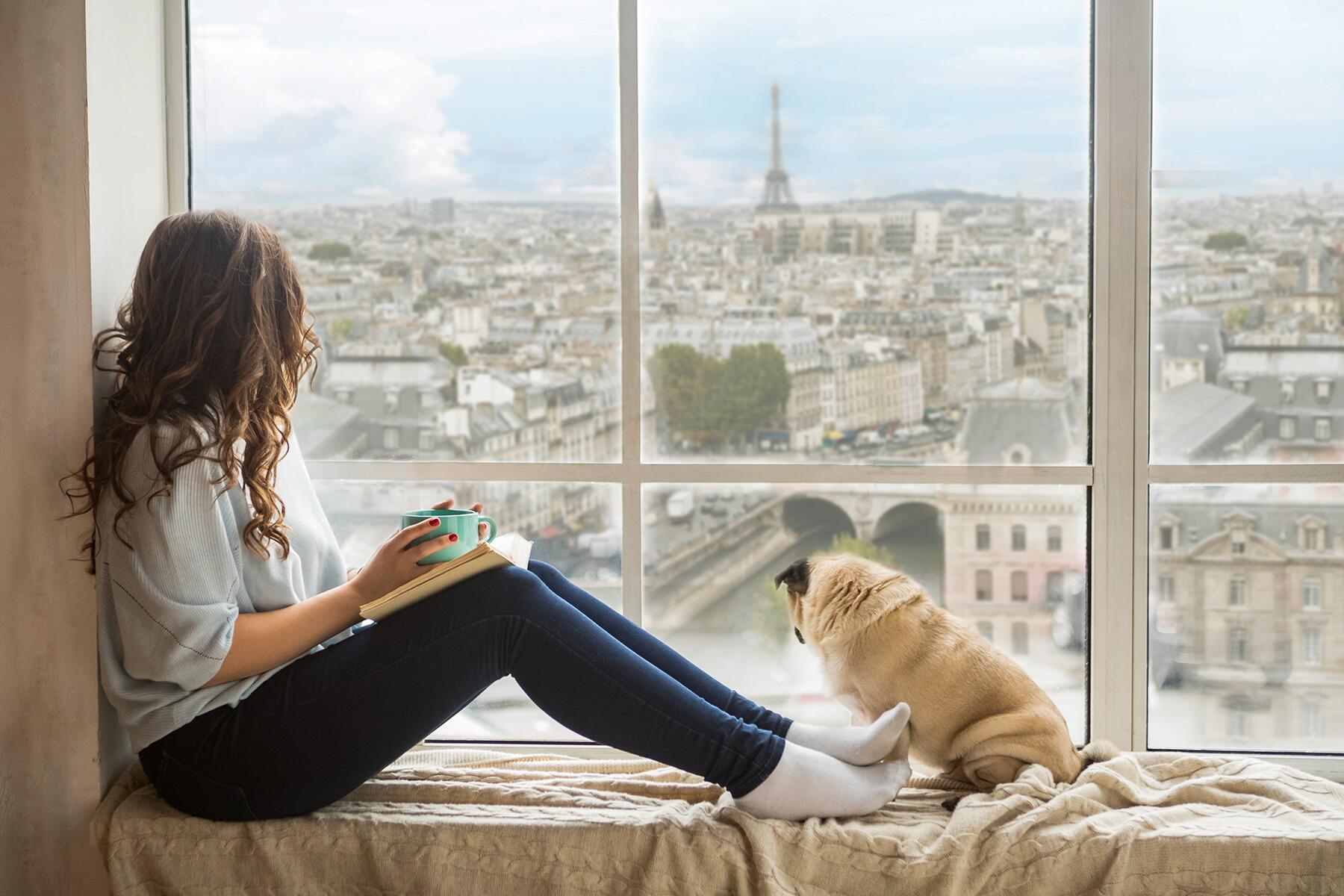 Get Lost in Paris Through Reading

If you’d like to travel into another world entirely, consider diving into the worlds of one of these books inspired by or set in Paris during your special Paris evening inside your home.

First up on the list of must-reads is Giovanni’s Room by James Baldwin, telling the story of an American expat living in Paris who struggles with internalized shame regarding his sexuality and begins a tumultuous affair with a man named Giovanni. A Moveable Feast is a memoir by Ernest Hemingway made up of a series of vignettes set in Paris in the 1920s. One of the greatest novels of the 19th century (according to many), Les Misérables by Victor Hugo, is set during the June Rebellion of 1832 and depicts the story of Jean Valjean as he flees from the policeman Javert over several decades (you may have heard of the many, many stage, television, and film adaptations of this story). In his book, Parisians: An Adventure History of Paris, Graham Robb tells the history of Paris through factual stories of people that actually lived in the city, from policemen to murderers, anywhere from the year 1750 to now. In the fictional account of Ernest Hemmingway’s first marriage to Hadley Richardson that is 2011’s The Paris Wife, Paula McLain tells the tale of just how bad of a husband (and boxer) Hemingway actually was. (Hint: He was a very bad husband who had an affair with her best friend!). 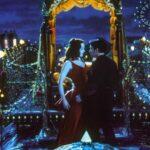 RELATED STORY
What to Read and Watch Before Going to Paris
Talk to us!Login or create an account to comment
Login Register
Community Guidelines
0 Comments