Skip the pricey bistros and tourists traps and seek out these fabulous Parisian eateries instead.

Picture this: you emerge fresh from the museum after an afternoon of enjoying everything from the Mona Lisa to Winged Victory or Monet’s Water Lilies, and all at once, you feel it: hunger. But where to go? Certainly not one of those dime-a-dozen brasseries or bistros drawing in tourists with their promise of ho-hum food. But there’s no point crossing town when you’re that hungry, or hunger may soon turn to hanger. (No one wants that on vacation.)

Luckily, there are a few extremely worthwhile places within a stone’s throw from Paris’ most famous museums–and at pretty much every price point.

A massive part of France’s public art collection is divided among three museums: the Louvre, for everything from prehistory through the mid-19th century; the Musée d’Orsay, from the mid-19th through the early 20th; and the Pompidou Center, for contemporary art. Unsurprisingly, most visitors to Paris pay at least one of these spots a visit–and it’s also unsurprising, then, that tourist trap restaurants are thick on the ground in the surrounding areas. 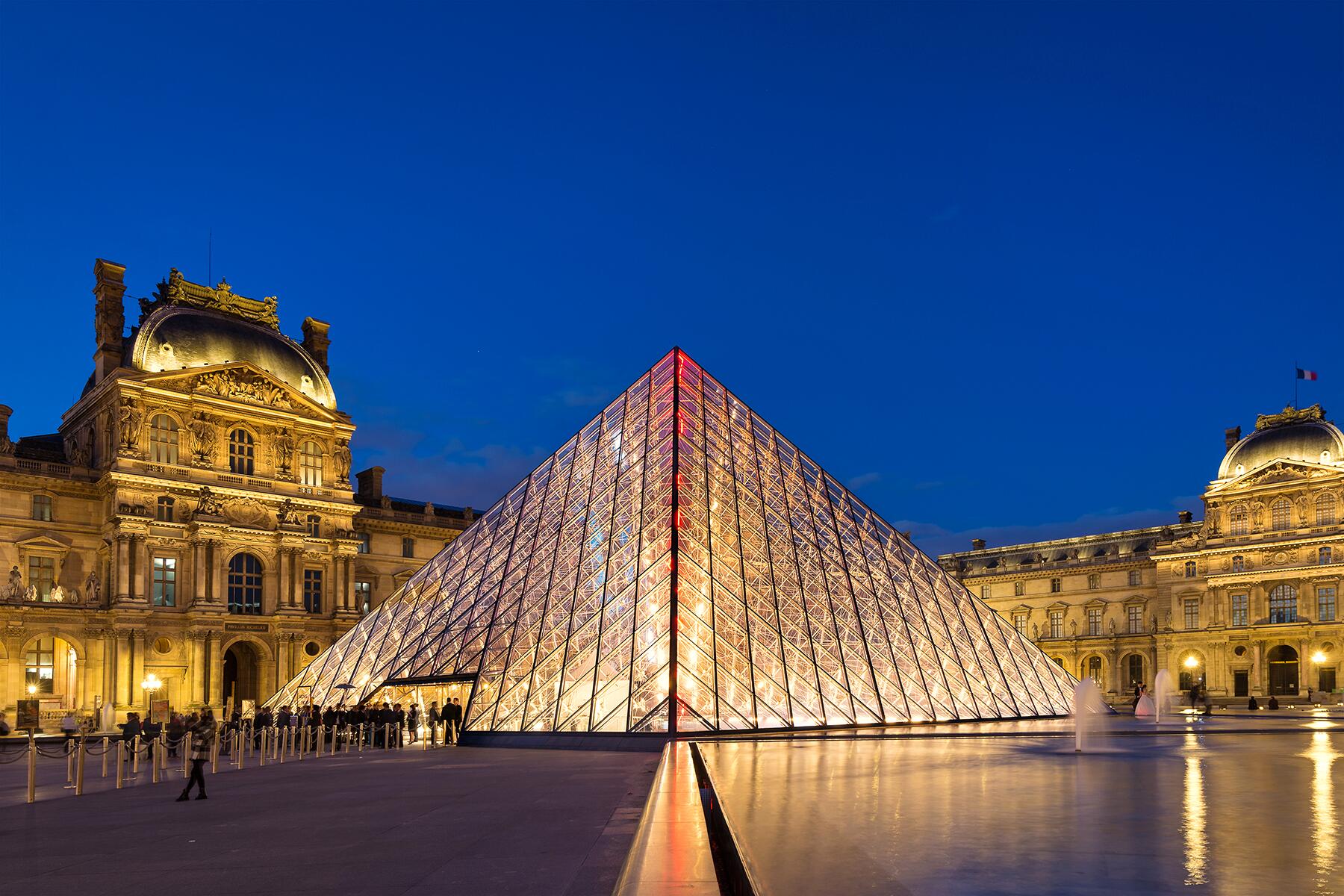 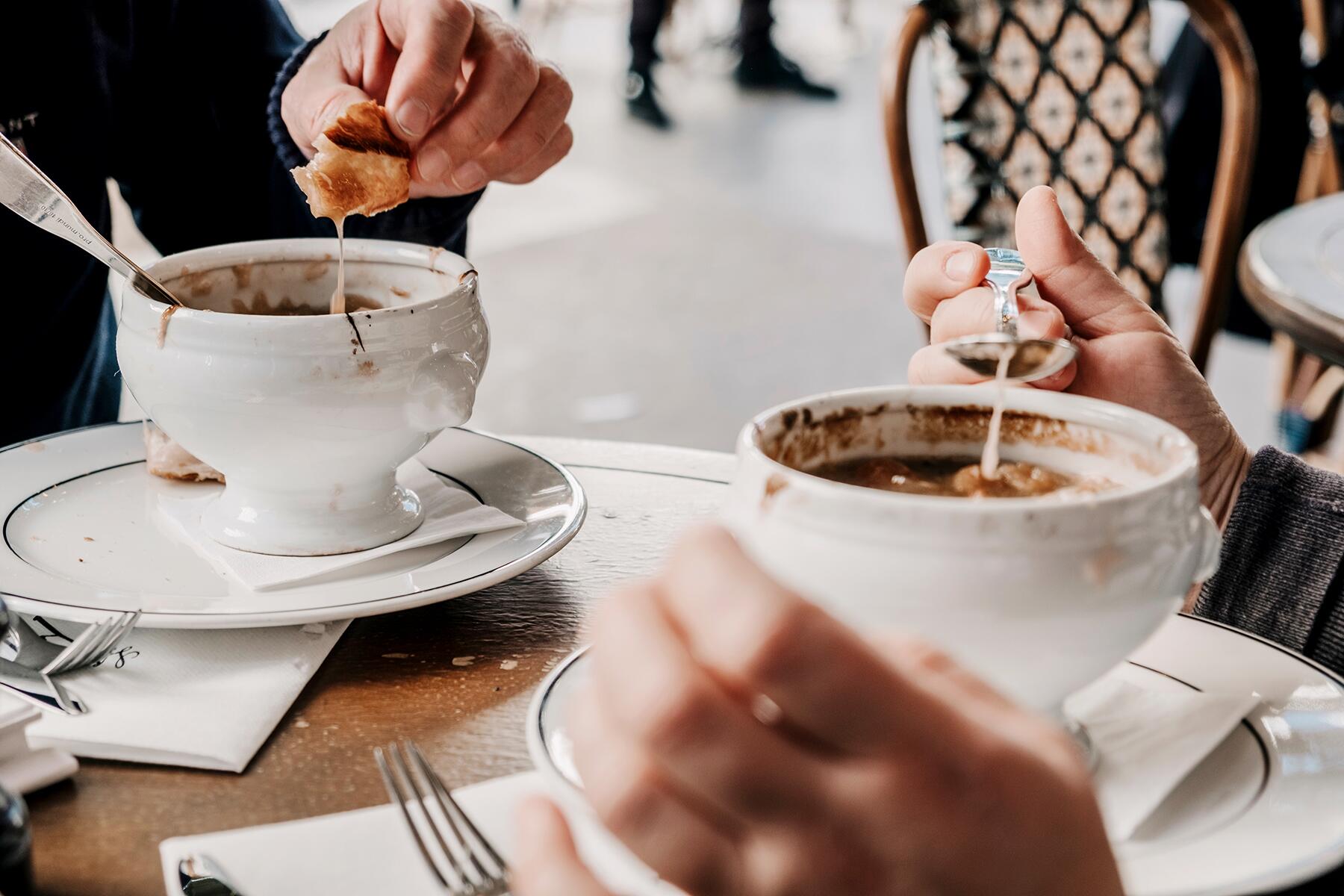 The Louvre is one of the biggest museums in the world, so it’s no surprise you’ll be famished when you emerge. If you really can’t walk another step, you’re in luck: the Louvre is home to an outpost of famed tea salon Angelina, which crafts exquisite pastries and is famous for its African hot chocolate (though it’s Croque Monsieur is certainly nothing to turn up your nose at). Find it in the Richelieu wing, not far from furnished private apartments dating to the Second Empire.

If you’re willing to walk about five minutes from the museum (leave through the Richelieu exit), you can also reach the original Angelina on Rue de Rivoli. Here, you can bask in the glory of the turn-of-the-century-era dining room while enjoying your lunch and cakes. Or walk just around the corner to Riviera-inspired Loulou, located in the courtyard of the Musée des Arts Décoratifs, which occupies part of the original Louvre building. (Be sure to reserve if you want a seat on this coveted terrace!)

A bit further still (though definitely no more than a 10- to 15-minute walk), Ellsworth is a fave among locals and ex-pats alike, thanks to Chef Braden Perkins’ locavore menu featuring, among other things, Paris’ very best fried chicken. Chef Perkins’ Verjus, meanwhile, offers a higher-end tasting menu (reservations obligatory and well worth it).

You could also splash out at three-Michelin-starred Kei, where Chef Kei Kobayashi is known for his Japanese-French fusion food. Or for more historic flair, Le Grand Colbert has remained a local stalwart since 1900. Its roast chicken (and sumptuous Belle Epoque dining room) were even featured in Something’s Gotta Give with Jack Nicholson and Diane Keaton.

Like the Louvre, the Musée d’Orsay is also home to a restaurant, Café Campana, run by the Ducasse group. The simple fare here doesn’t quite live up to the extravagance of the dining room dating to 1900, with chandeliers, painted ceilings, and gilding, but it’s certainly pleasant enough and, above all, easy to access after a morning exploring the 19th century works on display here.

That said, if you’re willing to walk a bit (past the equally worthwhile Orangerie museum – home to Monet’s large-format water lily paintings and accessible either on its own with a joint ticket sold at Orsay), Michelin-starred Les Climats is barely 10 minutes away, with an outdoor garden terrace serving dishes dictated by the seasons: tomatoes with balsamic sorbet or pea tart with caviar may await in summer, and don’t miss the cheese selection from Androuet.

Racines des Prés, meanwhile, is just 10 minutes away and offers exquisite modern bistro cuisine and excellent wine. Or for something simpler, Eric Kayser offers great sandwiches to take away: enjoy them in the Tuileries with a view of Place de la Concorde and the Champs Elysées in the distance.

The Centre Pompidou is surrounded by a ring of just-ok brasseries, but it’s also just steps from some of the best food in the capital. If you don’t want to go far, Le Georges serves up fresh, modern bistro fare, including some excellent vegetarian options, with some of the most spectacular views of the city.

Just a short walk away, meanwhile, the former market area of Les Halles is home to some of the city’s oldest brasseries, like Au Pied de Cochon, best known for (probably) inventing that wintertime staple: French onion soup. You can also stroll up the rue Montorgueil to encounter excellent vendors of produce, cheese, charcuterie, and bread to assemble a picnic to enjoy in the new open space before the Gothic Saint-Eustache church. Or continue up to the end of Montorgueil, where, on rue du Nil, you’ll encounter the Frenchie family of establishments: the Michelin-starred restaurant, excellent wine bar, and to go shop with top-notch sandwiches.

Head just 10 minutes in the other direction, meanwhile, and you’ll be in the heart of the Marais. L’As du Fallafel is known for being one of the city’s best falafel joints, but it has strong competition with nearby Mi-Va-Mi. Miznon, meanwhile, offers a wider range of choices, including a delicious mushroom pita sandwich. They even stuff beef bourguignon into the pocket-style bread!

If vegans don’t find what they’re looking for here (or if you’ve eaten one too many plates of potatoes fried in duck fat on your Parisian adventure), walk just five minutes to Wild and the Moon, known for its superfood smoothies and juices as well as salad bowls, gluten-free pizzas, and more.

While these three museums are definitely the most famous in Paris, the city is also home to about 130 more, many of which, thanks perhaps to their being lesser-known, are nestled in neighborhoods with truly superb dining.

The recently reopened Musée Carnavalet, for instance, is in the heart of the Marais, along with the Musée National Picasso, and Maison de Victor Hugo. Besides being around the corner from falafel heaven, these museums also offer easy access to the Marais outpost of Breizh Café (pretty much the city’s go-to for crêpes and their savory counterpart, galettes).

As an added bonus, Breizh serves all day without stopping between 2 pm and 7 pm, as so many other restaurants in Paris do–perfect for a mid-afternoon lunch-dinner hybrid when your museum visit stretches longer than you expected.

If you’ve hit your French food limit, Eataly is a bastion of everything Italian, boasting delicious meals to enjoy in or to go, as well as shops selling high-quality Italian ingredients and products. Or take in dinner (or just cocktails and a few small plates) with a view at Le Perchoir Marais, located on top of department store BHV.

The Musée Monet Marmottan is a bit of a trek from the city center, located at the far end of the 16th arrondissement. But this small museum hosts one of the most world-renowned collections of Monet and is absolutely worth the journey–perhaps on the day you’re visiting the Eiffel Tower, also located on the western side of the city. After taking in the more than 300 Impressionist and Post-Impressionist works housed in this former mansion, hit up the Grande Epicerie de Paris, a gourmet grocery store where you can get everything you’ll need to assemble the very best picnic to enjoy in the small Jardin de Ranelagh or the nearby Bois de Boulogne.

Like the city’s larger museums, some of Paris’ smaller museums also offer truly exceptional dining experiences right on the premises. Le Camondo is one such restaurant, located within the Musée Nissim Camondo in the 17th arrondissement, known for its collection of 18th-century furniture, artwork, and more. Helmed by young chef Fanny Herpin, le Camondo is known for its seasonal menu of fresh French fare with a contemporary twist, served in a gorgeous private courtyard within the former mansion.

In the western wing of the contemporary art-focused Palais de Tokyo, Monsieur Bleu offers French classics and a few lighter options with one of the city’s best views of the Eiffel Tower. Speaking of which, at the nearby Musée du Quai Branly, devoted to Indigenous art from around the world, Café Jacques, a part of the Ducasse group, offers simple refined dishes with an exceptional view of the Iron Lady.

Within the Musée Carnavalet, dedicated to the history of the city of Paris, Les Jardins d’Olympe offers delightful plant-based fare from Top Chef contestant Chloé Charles and sweets from Andrea Sham, with creative cocktails from the talented Camille Vidal.

Within the Musée de la Vie Romantique, nestled in lower Montmartre, British bakery stalwart Rose Bakery has crafted a gorgeous tea salon menu of sweet and savory bites to enjoy in the romantic gardens. The same holds for the 8th arrondissement’s Musée Jacquemart André, known as much for the architecture of the gorgeous former private home as for its collection of Italian art. The museum boasts a lovely café with a menu of sweet and simple savory options, often designed with temporary exhibits in mind. Enjoy on the private terrace or in the dining room of the mansion.