Once you’ve seen the Eiffel Tour and the Louvre, discover all the hidden gems in the City of Light.

Many travelers know Paris, France, quite well, either personally or from films, books, and countless travel articles. Travelers understand what to expect in Paris and what they ought to see. But as with all places, it’s often the case that only once you live in a destination that you have the leisure to explore it further and deeper, to turn onto side streets you might normally ignore. That’s when a place reveals itself, offering a few more secrets. This is true even of the most beloved explored destinations, even Paris. Have you ever seen these 15 hidden gems?

La Petite Ceinture, or Little Belt, was the brainchild of Napoleon III and Baron Haussmann, who together razed much of France’s capital, creating what is now quintessentially Paris: grand boulevards, butter-hued buildings, trees, and open spaces. In December 1851, the first section of this intramural rail track circling Paris was commissioned. At its peak, in its 1.5-hour circumnavigation of the city, the Petite Ceinture carried up to 90,000 passengers a day in six scheduled trains per hour, plus tons of goods around and into Paris. Then came the metro and the car, and bit by bit, the Petite Ceinture became redundant and forgotten. Today, the old train line is celebrating a revival, not as a railway, but as eminently lovely and unusual inner-city green spaces. 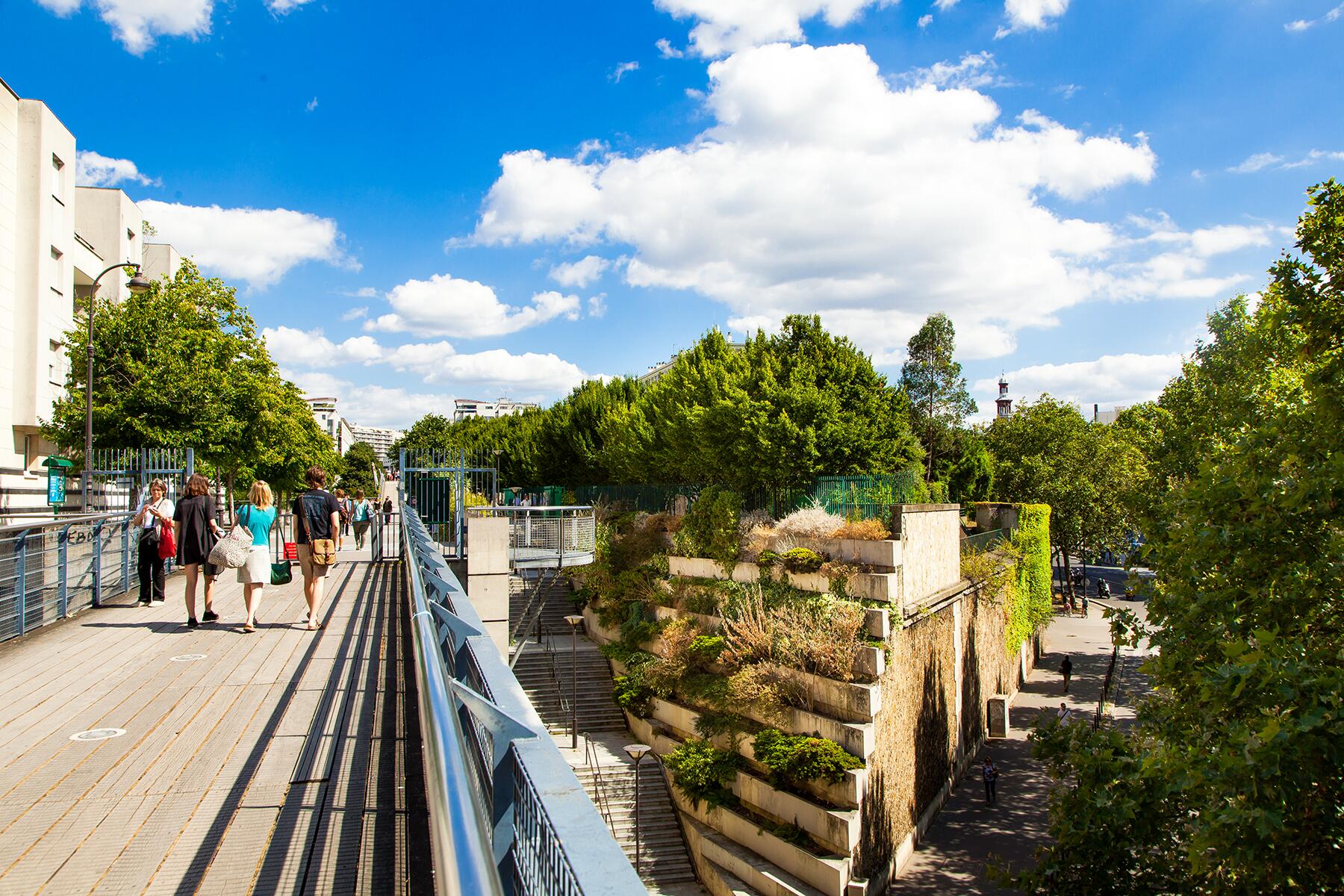 This nearly 3-mile long garden path along an abandoned branch of the Petite Ceinture is often called the Parisian equivalent to New York City’s Highline, conveniently forgetting that the Coulée Verte in Paris officially opened in 1993, whereas the NYC Highline was inaugurated in 2009. This track, which starts just behind the former Gare de Bastille (now reinvented as the Opéra Bastille), allows you to stroll through beautiful gardens that flower in spring, high above the lovely arches of the Viaduc des Arts with its great shops and cafes. The elevation also allows for glimpses of Paris that you would completely miss from street level. 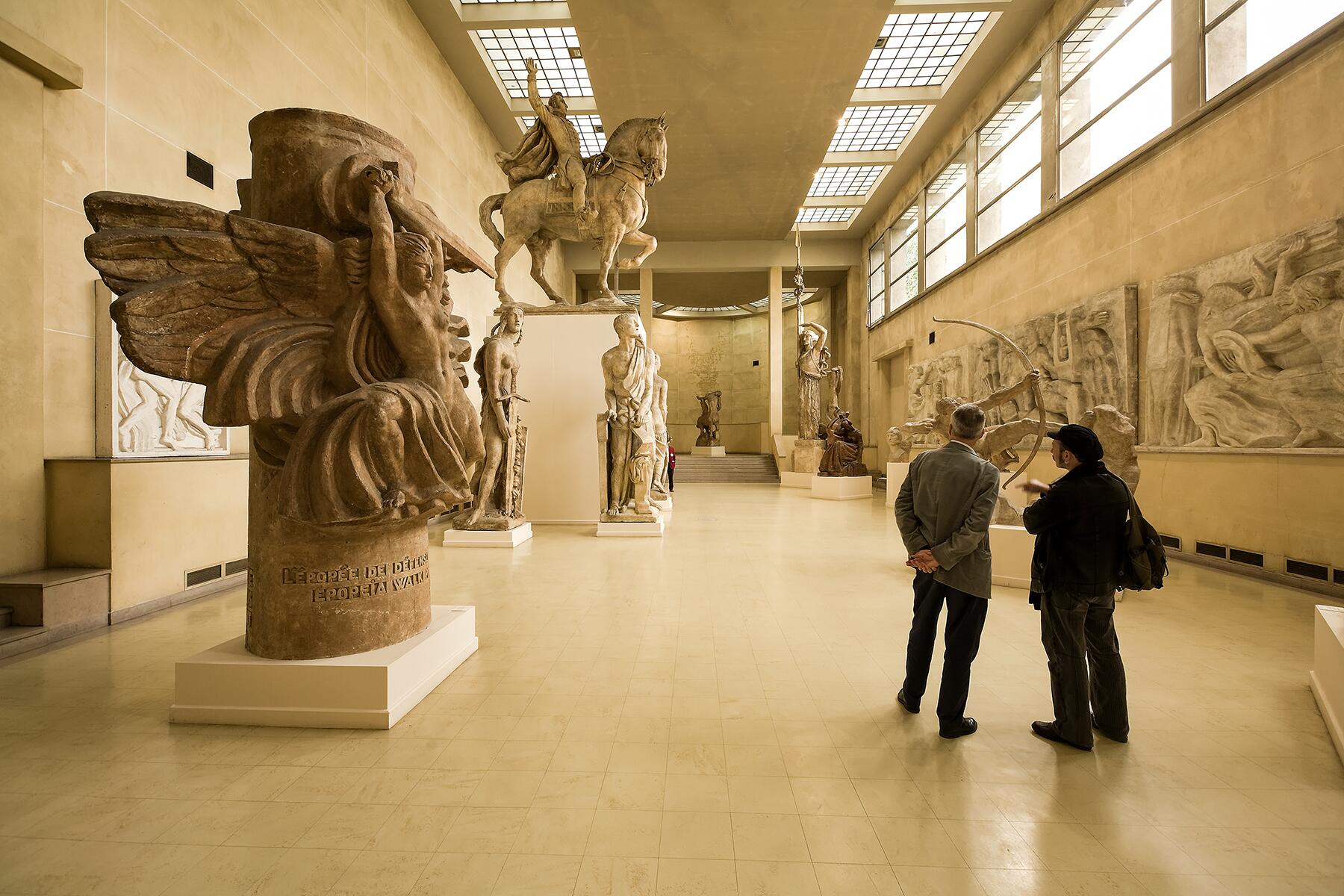 Concealed in a side street just steps from Gare Montparnasse lies the former studio of sculptor Antoine Bourdelle, which offers a rare look at what Paris must have been like in the late 1800s when it was filled with artists and new studios. Left pretty much as it was then, Bourdelle’s studio is a mix of an art gallery, a well-preserved home, and a gorgeous courtyard garden. 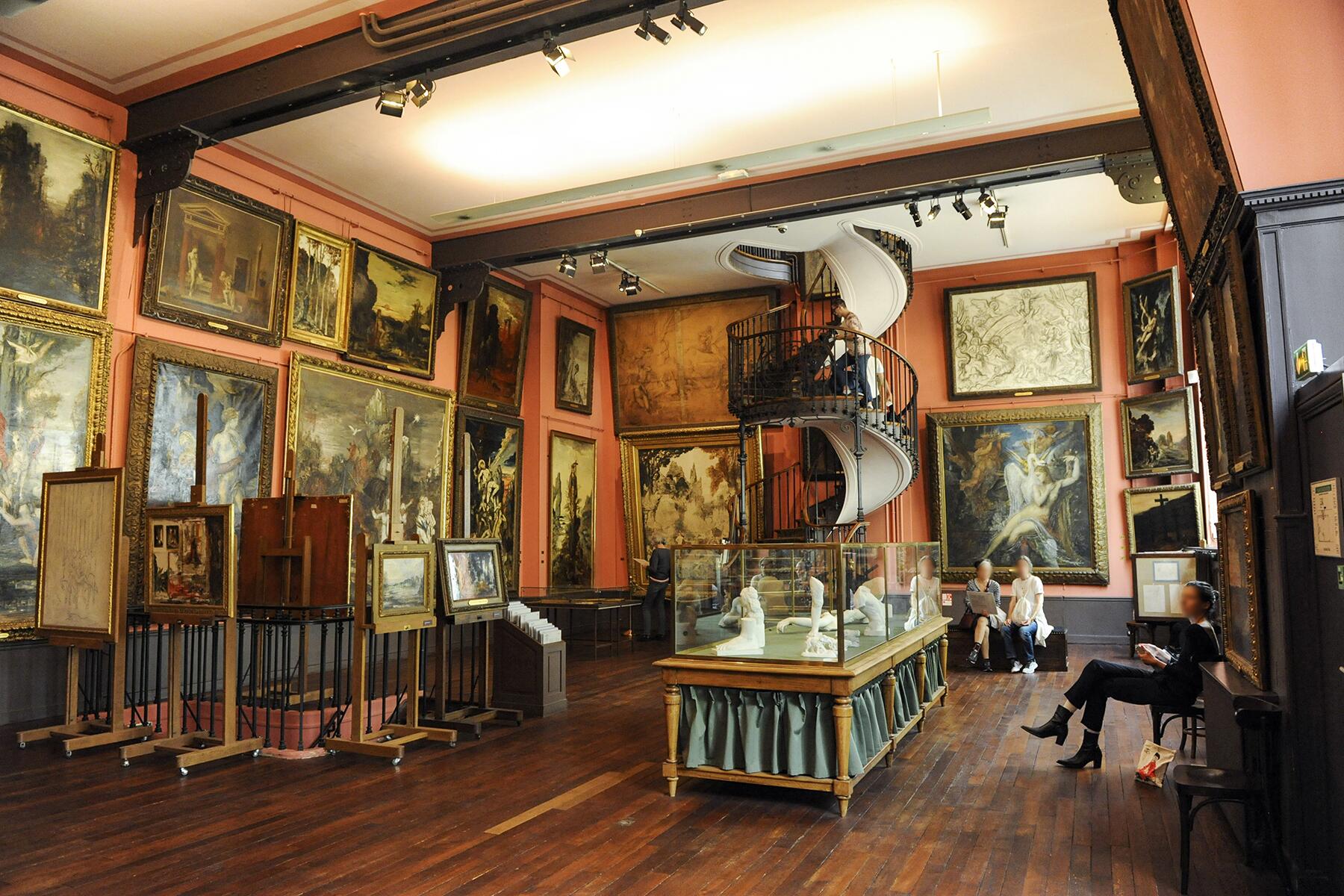 Another great oft-overlooked museum, Musée Gustave Moreau houses one of the prettiest and most photogenic spiral staircases in Paris, if not Europe. With the museum also being the former home of the painter, the staircase is there nearly as an afterthought. The main attraction is the wonderful artwork by Gustave Moreau. Yet this little piece of twirling perfection is just so picturesque that you might forget about the artwork for a moment. 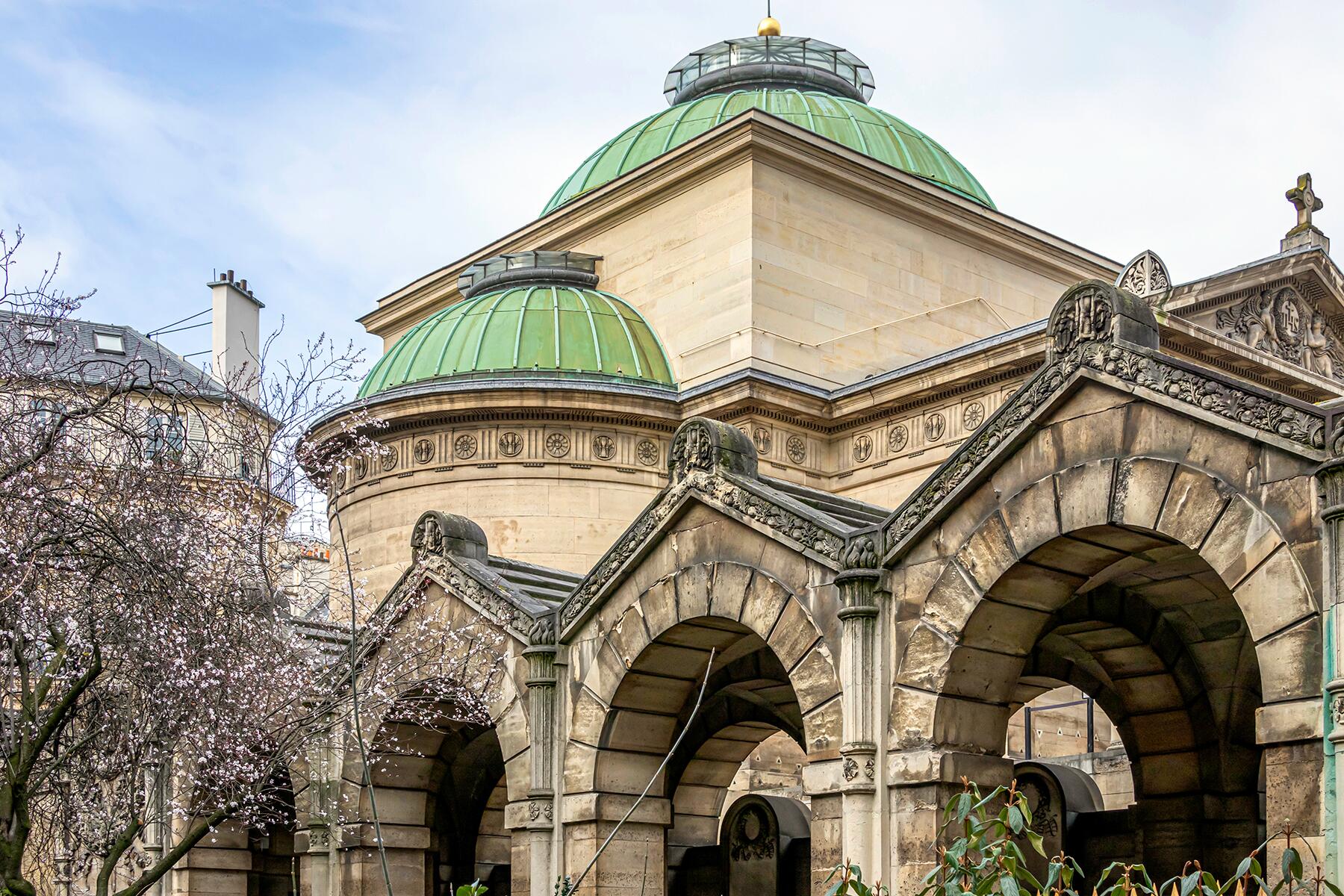 We know the fate of Marie-Antoinette—guillotined in what is today the Place de la Concorde. Once her head was reunited with the body, the wife of Louis XVI (who also shared her fate) was buried in an unmarked grave on Rue Pasquier, in what used to be the graveyard of the temple-like Madeleine Church. Here, in 1813, Marie-Antoinette’s body was discovered and exhumed, then buried with other kings and queens in the Basilica of Saint-Denis, on the doorstep of Paris. But, in 1826 the neo-classical Chapelle Expiatoire was built in her honor on the very spot, and is a well-kept secret, with few visitors being aware of the significance. 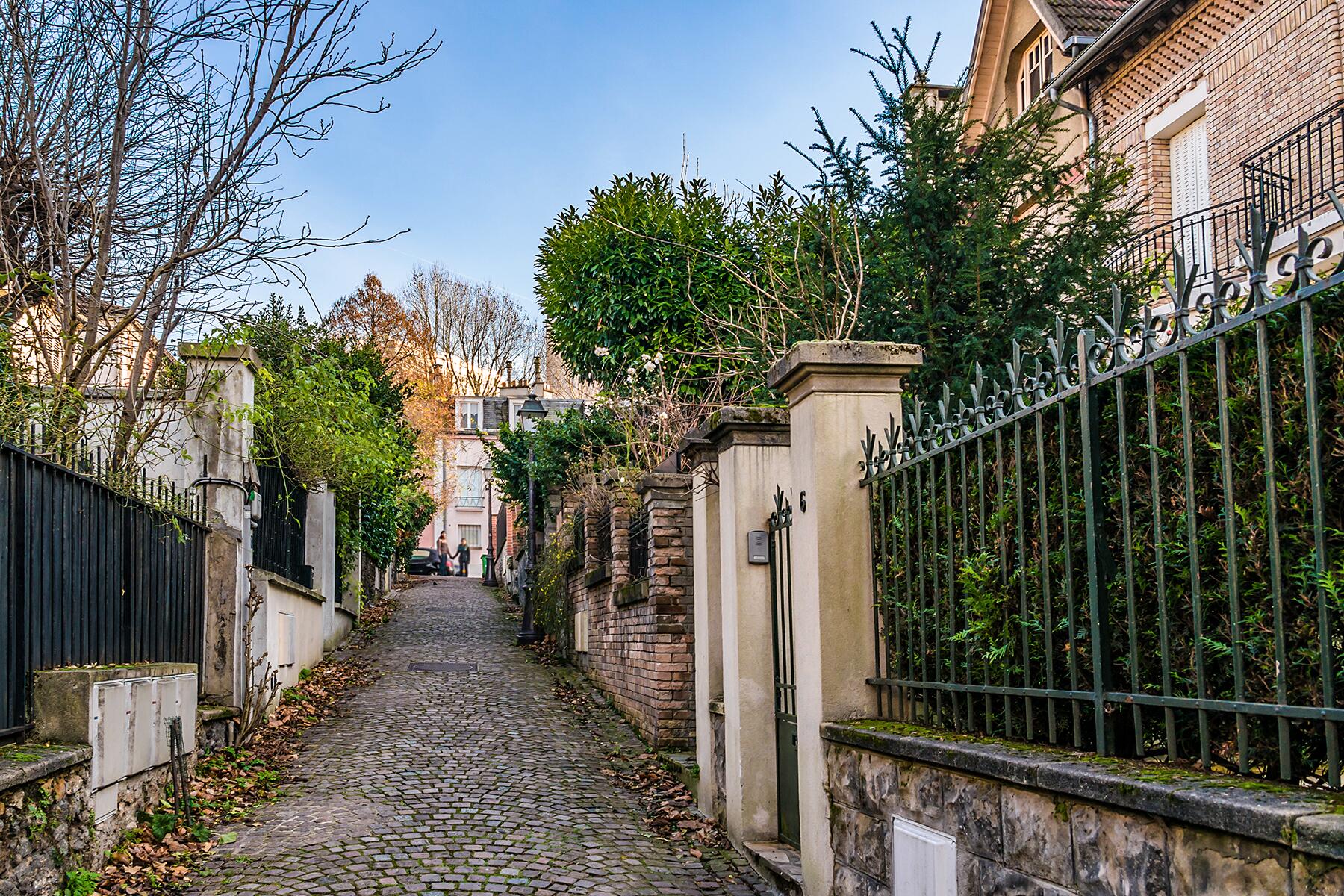 A village within the city—narrow cobbled lanes with tiny houses and even tinier gardens—the Village of Mouzaia lies off the main drag of Rue de Mouzaïa near the lovely Buttes Chaumont Park. This quartier is too picturesque for words, yet practically unknown. Walk up from the park or metro stop Botzaris, then dive into Villa d’Alsace, then thread back into the next neighborhood, Villa Eugene Leblanc, and so on, until you have weaved your way through the quartier taking countless pictures (and probably started looking up real estate listings for your many dream homes). 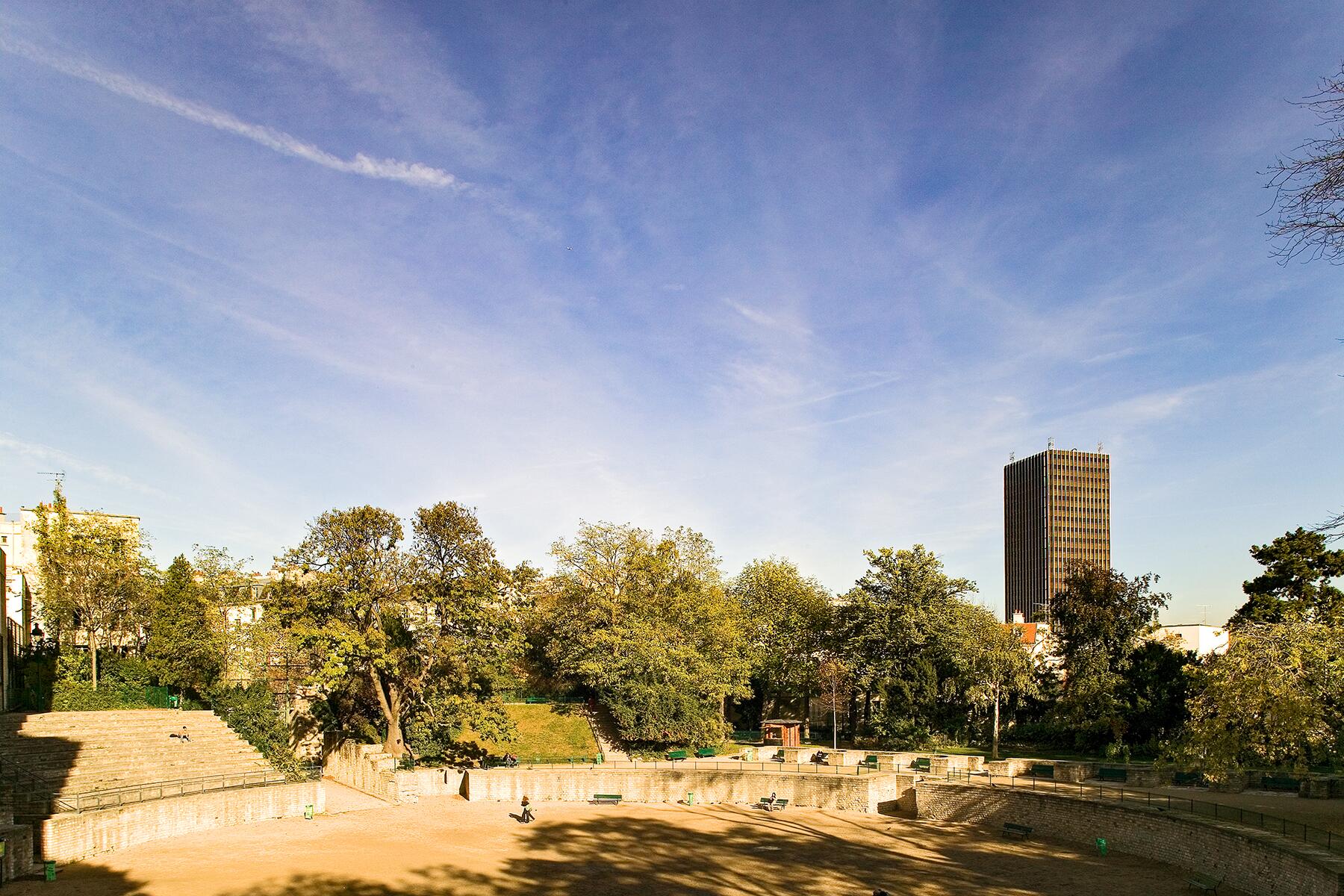 As is appropriate for the Latin Quarter and the Roman era of Paris, there is an amphitheater. Only it is so hidden away, that most people don’t even know it’s there. The Arènes de Lutèce, named Lutetia under the Romans, is an impressive theater that at one time reportedly seated some 17,000 people—twice the population of non-Roman Lutetia. Nestled between Place Monge and the Jardin des Plantes, it is a peaceful small park generally frequented by lunch picnickers and children playing ball in the old arena. 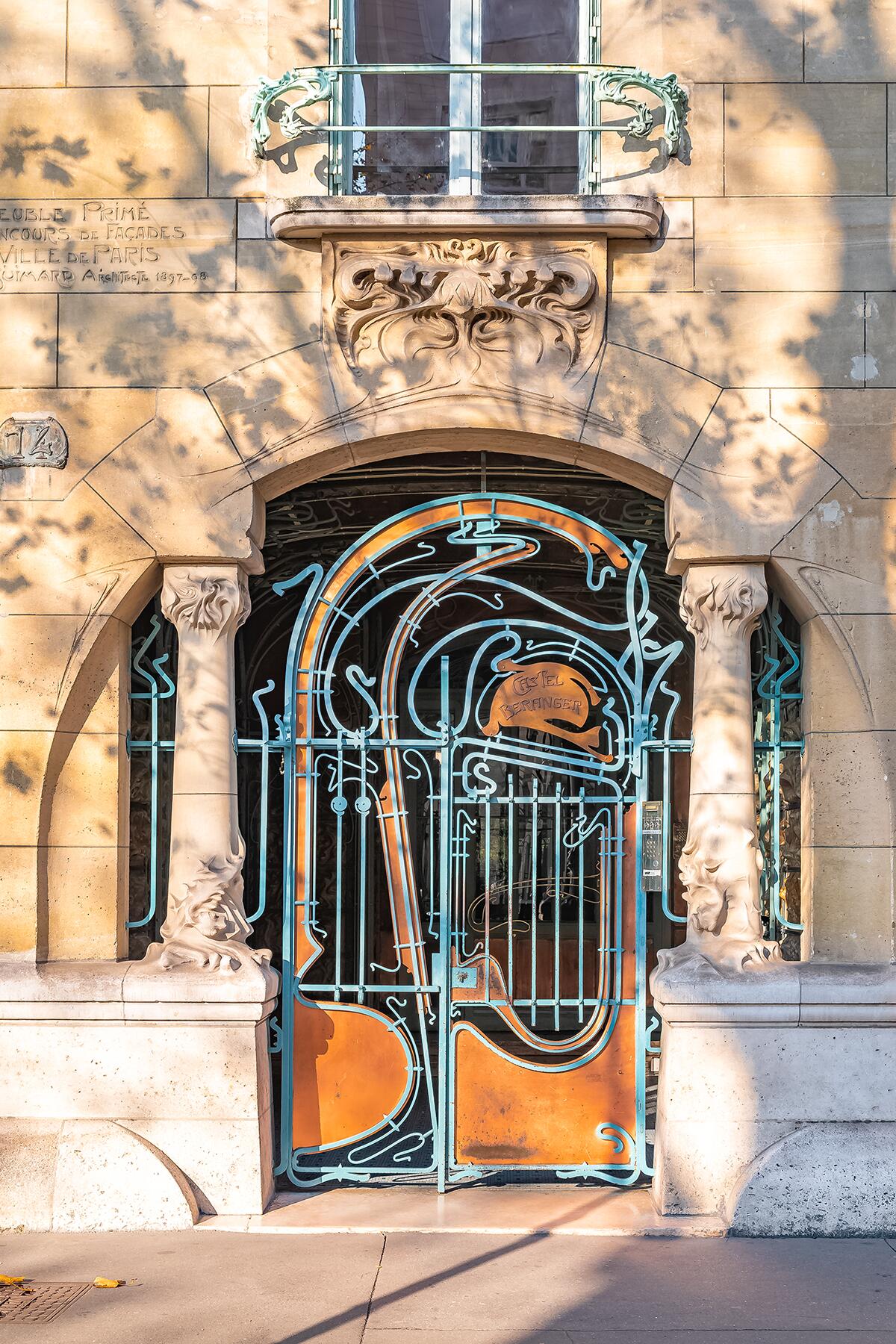 Hector Guimard (1867-1942) is best known for his superb green Art Nouveau metro entrances. They are dotted across Paris, with some stunning examples being the Porte Dauphine and Abbesses metro entrances. So iconic, so Paris, and so lovely. Guimard not only designed metro entrances, but he was also a masterful architect. In the 16th arrondissement, there are some great examples of Guimard’s architecture. Castel Béranger, at 14 Rue Jean de la Fontaine, is probably the finest example of his work. The entrance, the hallway, and the balconies are stunning. Steps away on the same street at no. 60 is Hotel Mezzara, and just around the corner from there stands Hotel Guimard at 122 Avenue Mozart. Check out further works by Hector Guimard here. 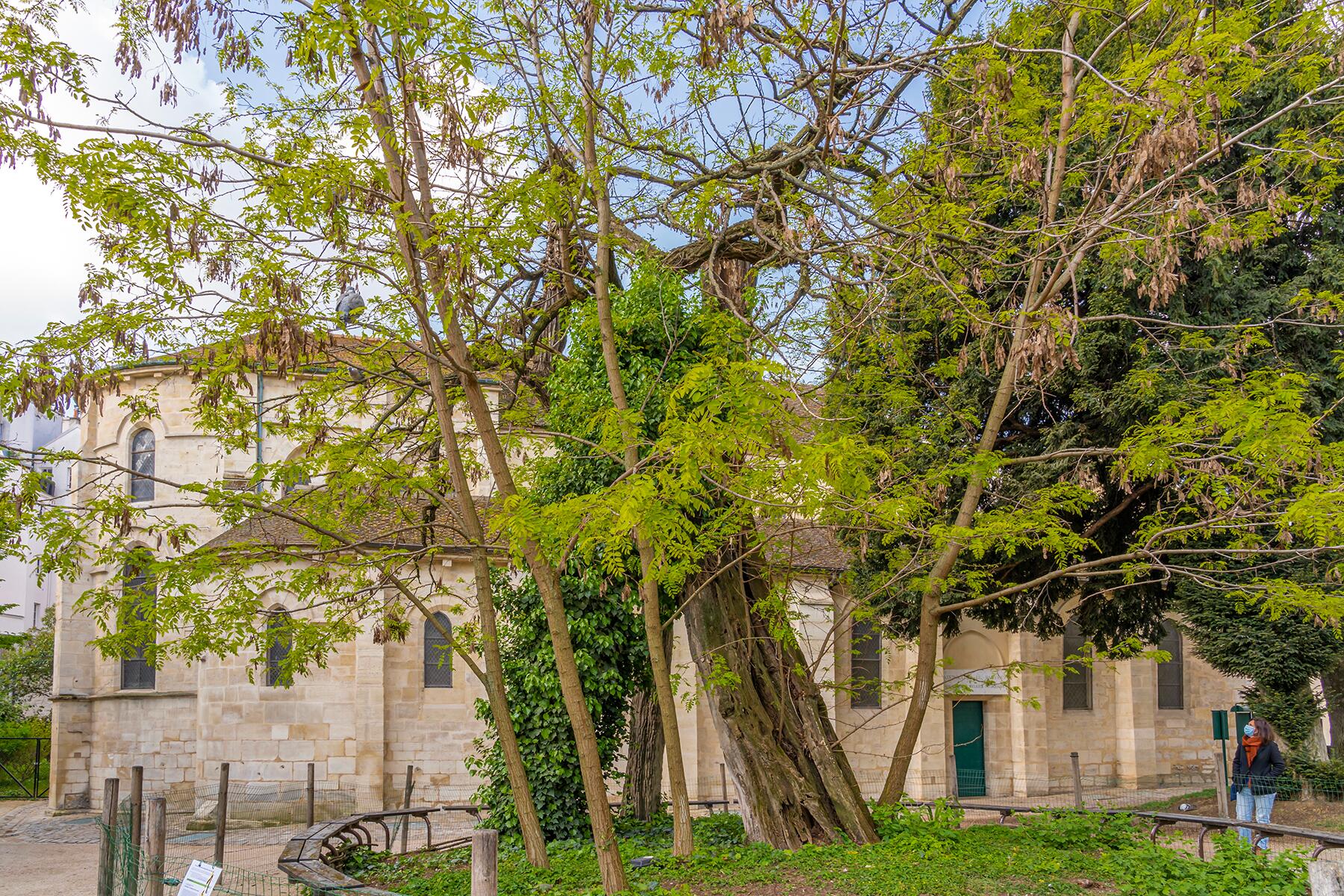 South of the Ile de la Cité, next to the English-language bookstore Shakespeare & Company, and alongside the path trodden by pretty much every single visitor to Paris lies this tiny park, overlooked and ignored. Yet, inside the gate, you’ll find not only the church of Saint-Julien-le-Pauvre (dating back to the 1200s, making it one of the oldest religious buildings in Paris), built at the same time as the imposing Notre Dame just across the river, but also the oldest tree in Paris. The tree, propped up by a not-so-pretty concrete crutch, was planted in 1601, making it well over 400-years-old.

Right in the heart of Saint Germain, where people walk, sit in cafes, and shop, lies what must be Paris’ smallest vineyard: Clos St Julienas. Ten vines of Gamay are grown in a tiny courtyard that is the Square Félix Desruelles, bordering the bustling Boulevard Saint-Germain, nestled next to the magnificent church and the grand Art Nouveau porcelain plaque that was made to celebrate the Sevres porcelain. Every year the Saint-Juliénas des Prés brotherhood inducts well-known local personalities to honor and maintain the vines entrusted to them for one year. One can only guess if they also get to drink the spoils. 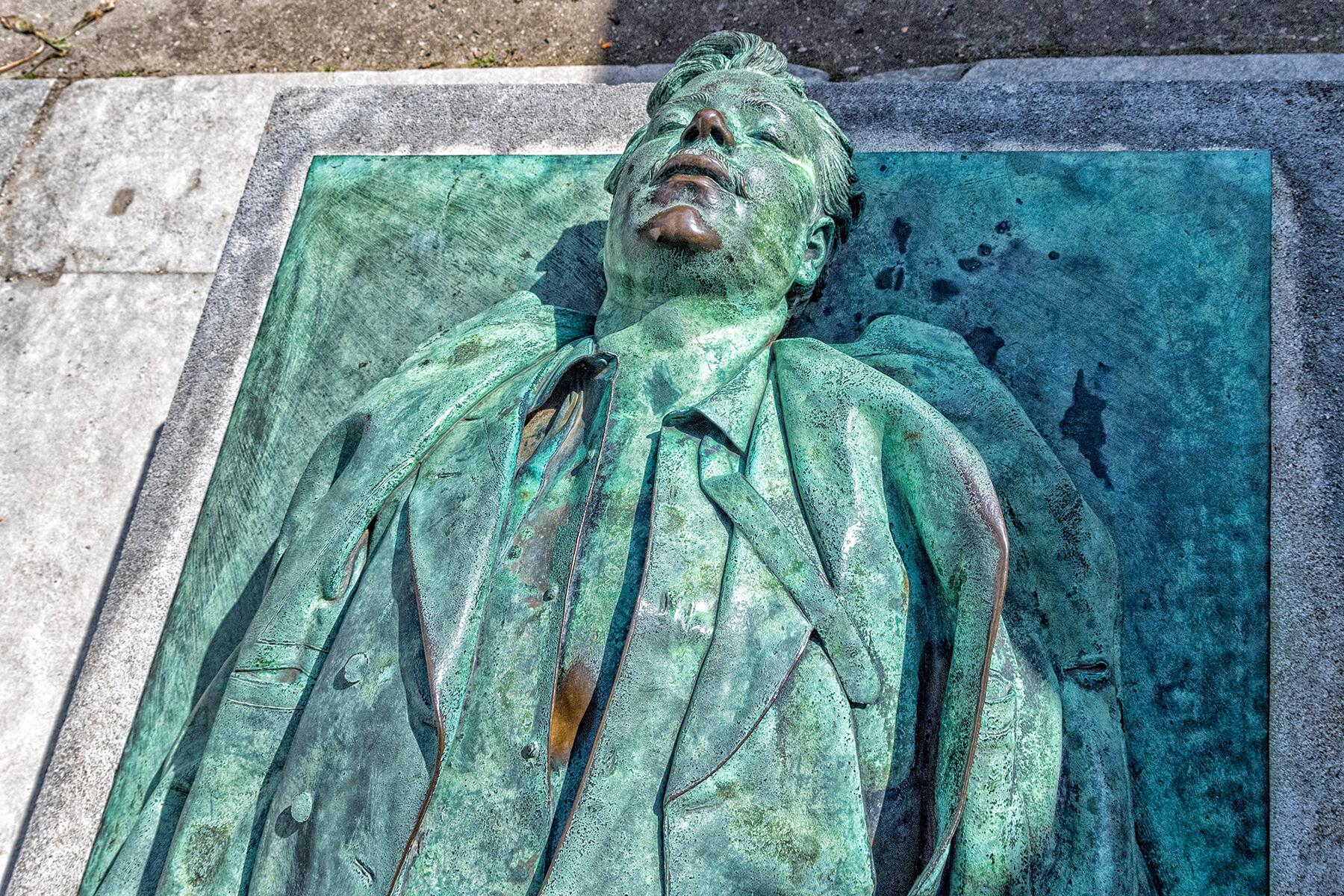 In the cemetery Père Lachaise, there is the grave of Victor Noir, nom de plume for journalist Yvan Salmon, who died pretty much an unknown in a political scuffle. His life-sized bronze is sculpted to lie as he fell with his hat by his side. At first glance, nothing seems unusual until you notice the statue’s…ahem, private parts, have been rubbed to a shine and a flower is tucked in Victor’s hat. Despite Victor having died unmarried (if engaged), his statue has been turned into a fertility symbol. Women looking to improve their fecundity, sex-life, or chances for marriage make their way to the grave, leave a flower in Victor’s hat, rub his nether regions, and leave full of hope.

Dating back to 1920, when the Art Deco style was only rivaled by the love of Egyptian Revival style, the Luxor Cinema is one of the oldest cinemas in Paris, and the most unusual. Inspired by the film Cleopatra (1917), architect Henry Zipcy went all-out when designing this little gem: the outside of the cinema is all painted in yellow adorned with turquoise accents, stained glass, and gorgeous tiles. Inside there are faux columns, symbols of the god Horus (often represented as a stunning bluebird with outstretched wings above doorways), beautiful details of lotus flowers, and more throughout the cinema. 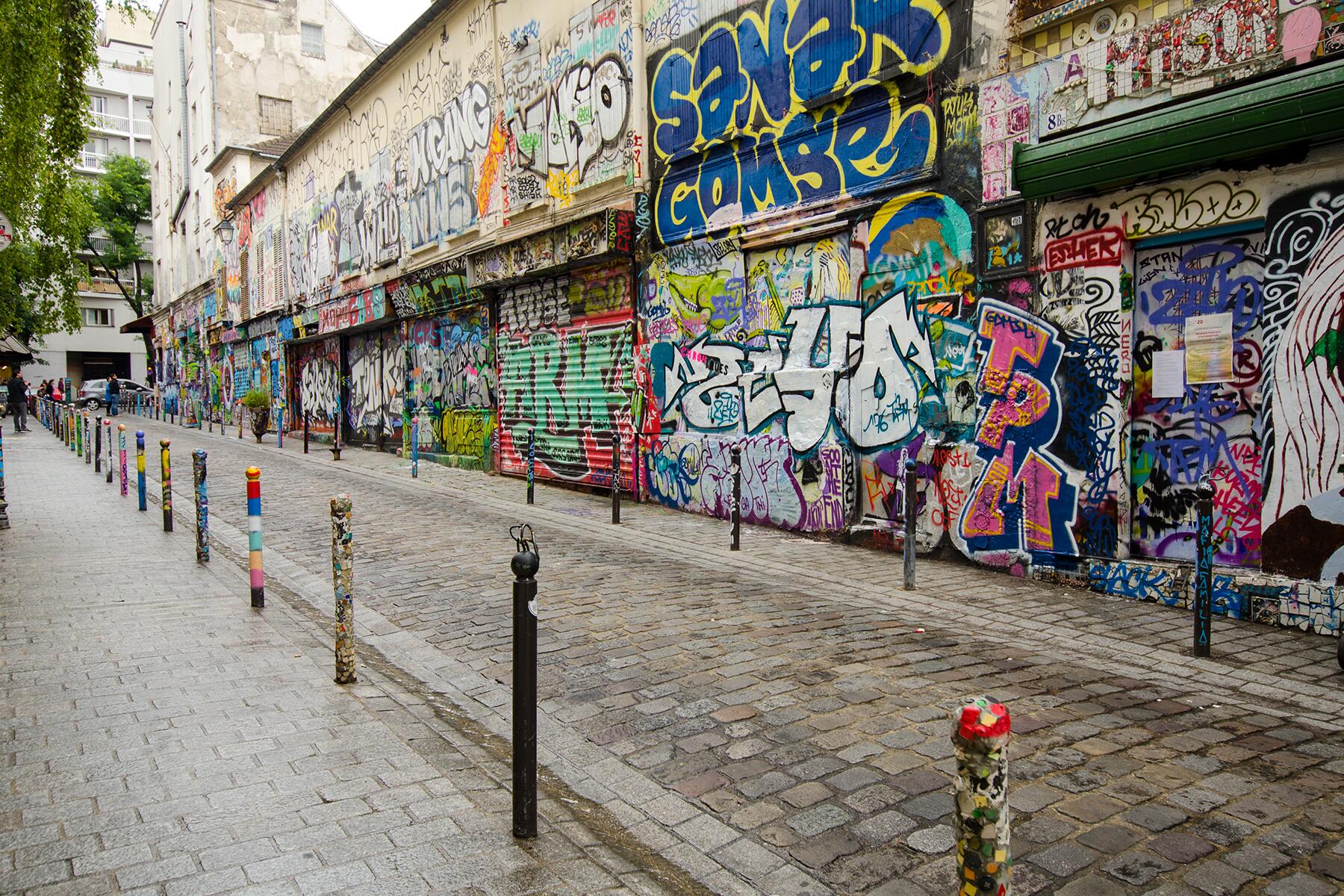 Paris has a lot of street art, evident everywhere from the gigantic murals in the 13th arrondissement along Boulevard Vincent d’ Auriol, to the small mosaics from the artist Invader on street corners. But for one colorful burst of everchanging street art, head down to Rue Denoyez, just steps from metro stop Belleville. This short street is crammed full of art and also offers some great little cafes where you can sit and appreciate the beauty all around you. 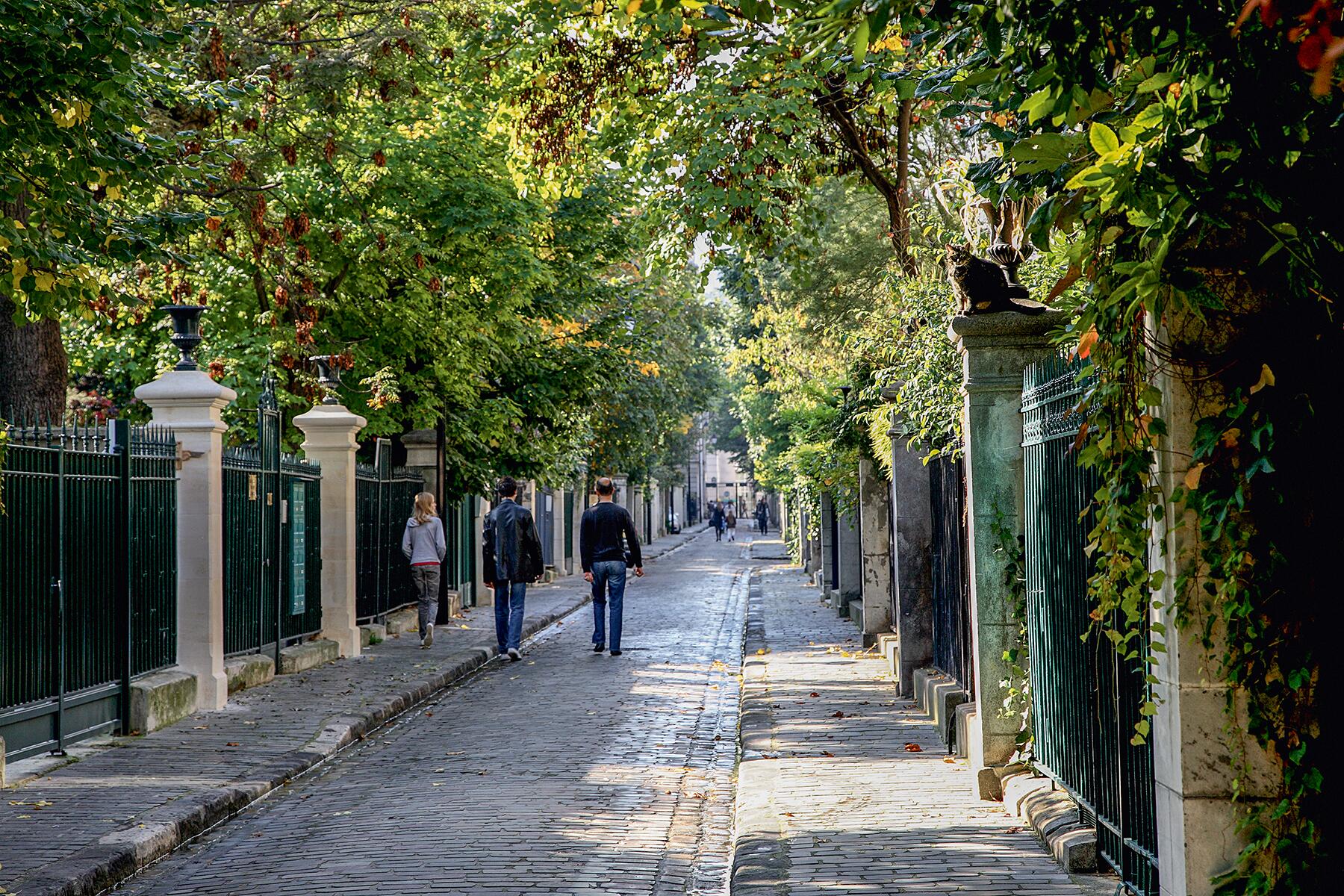 In a mostly residential Batignolles area of the 17th arrondissement in the north of Paris, lies a hidden street that feels like it is right in the heart of the countryside rather than steps away from a bustling boulevard and nearby metro stop. Alongside this cobbled lane, there are individual one-family houses with small gardens, fences, and so much green, you think you have left Paris altogether. The Cite des Fleurs, or City of Flowers, originally had a requirement by law for owners to plant at least three trees in their garden, and now the results are a shaded lane full of birdsong. The lane’s gates are open to the public between 7 a.m. and 7 p.m. during the week, and 7 a.m. and 1 p.m. on Sundays and bank holidays. 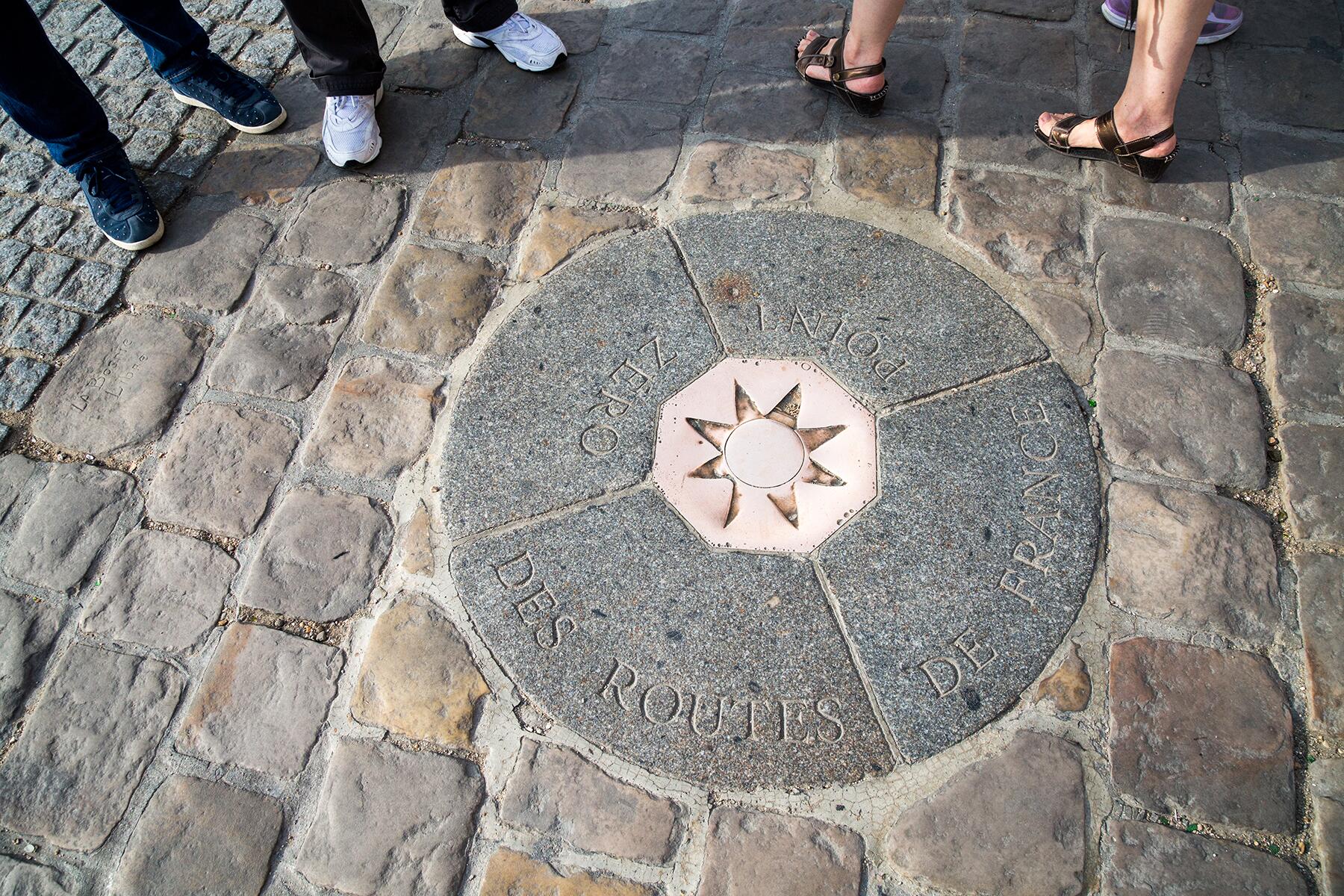 Did you know that right in front of Notre Dame there is a small golden plaque that marks Point Zero, the geographical center of Paris? From here all distances are measured, so from wherever in the world you are looking up the distance to Paris, this is to the point of reference. This marker is not just useful, but also attracts some weird superstitions: some people leave coins while others spin around it on one foot, all in hopes to have wishes granted.