Frilly petticoats and lace knickers that would make even the most risqué of Montmartre shop windows look beige in comparison, a leg workout to rival a HIIT class, and a cacophony of animalistic shrieks akin to mating season in a wildlife documentary: the French Cancan isn’t about blending in. Since the early 19th century, Cancan dancers have been challenging the status quo.

The Moulin Rouge Cabaret Club in Montmartre, Paris, is often incorrectly hailed as the birthplace of Cancan, one of the highlights of their carnivalesque show. Although the dance did indeed originate in Montmartre, women were waving their petticoats and flashing French knickers 70 years before the Moulin Rouge opened. The gaudily-lit club has become one of Paris’s most famous sites. It graces postcards, fridge magnets, stationery, and even Christmas baubles. Its inclusion in popular culture, first in John Huston’s 1952 movie Moulin Rouge and more recently in Baz Luhrmann’s 2001 musical of the same title, has ensured that there are very few people who don’t recognize the iconic red windmill.

Often when we think of Cancan and the Moulin Rouge, we think of a tragic love story between Ewan McGregor and a consumption-ridden Nicole Kidman. We think of a ruddy-faced Jim Broadbent bursting into song sporting a mustache, oily goatee, and garish face paint. We think of Pink, Christina Aguilera, Lil’ Kim and Mya singing “Voulez-vous coucher avec moi, ce soir?” Hedonism, music, dancing, excess, sex appeal. It’s safe to say that doing laundry, or whipping up mayonnaise, is not at the forefront of our minds. But laundry and mayonnaise actually formed the pillar stones of French Cancan.

At the turn of the 1800s, the working-class women of Montmartre had a rough deal. They were paid significantly less than men (if they were paid at all), expected to wait hand-and-foot on their husbands, and many eked out a living as washerwomen. Here, sick of uncomplainingly scrubbing their husbands’ pantaloons and preparing their meals, they began to express their discontent through dance.

Their petticoats and corsets were restrictive, so they hiked their skirts above their knees and bared their underwear to their audience. They created dance moves inspired by their chores: le tire-bouchon (corkscrew), which involved raising one knee at a time and rotating to mimic the turning of the screw in the cork; le lavoir (washhouse), where they simulated scrubbing clothes using their petticoats, and even la mayonnaise, which involved rotating their legs in circles to mimic mixing the condiment. The moves, and the costumes worn, are still the same today.

The public was scandalized by the display of nudity and by the rebellion against societal “norms” that the Cancan symbolized. In 1831, the police tried to ban the dance. Far from being deterred, the women saw this as official recognition of their rebellion and grew in confidence. They began to supplement their wages, or even earn their living, dancing the Cancan. Some men began to take up the dance too, but it was one of the very few jobs where women would earn significantly more than their male counterparts.

After the brutality of the Franco-Prussian War, the 1870s marked the beginning of La Belle Époque in France, a period of relative peace, technological advancement, and artistic and literary movements in the country which would last up until the outbreak of the First World War. Montmartre in particular attracted large numbers of painters, actors, and writers. In 1889, Joseph Oller, a Spanish entrepreneur, and Charles Zidler, a French stage director, founded the Moulin Rouge. Cancan performances formed part of champagne-fueled parties, there was an on-site elephant in the garden, and painter Henri de Toulouse-Lautrec immortalized the scenes in oil paintings and posters. Today, watching a cabaret show is still a highlight for many visitors to France.

“I hadn’t made the link between the dance moves that we perform and the feminist origins of the Cancan,” says Léna Guerin, a cabaret dancer currently based at Cabaret L’Ange Bleu near Bordeaux. “But the Cancan is definitely my favorite dance of the show. It’s energetic, empowering, and freeing. When you shout it feels as though you’re letting go of all of your frustrations.”

As dancers kick their way through the corkscrew, the washhouse, and making mayonnaise, they accompany the routine with shrill cries of “Nya! Nya! Nya!”

In May 2022, one of the largest cabaret and Cancan clubs in France, The Lido in Paris, closed its doors, after almost 80 years of operation. It hosted some of the most famous performers of the last century, including Edith Piaf, Johnny Hallyday, and Josephine Baker. Had Cancan finally diverged so far from its feminist origins that it had lost its appeal?

Cabaret dancers are expected to be as hairless as babies and perfectly made-up. Many clubs impose height restrictions, and The Lido wouldn’t take dancers shorter than 1.75 meters (five feet seven inches). While there is some body diversity among cabaret clubs (some prefer skinny dancers, others muscular, and others curvy), dancers are expected to maintain roughly the weight and body shape with which they were hired. Changes could be detrimental to their careers. 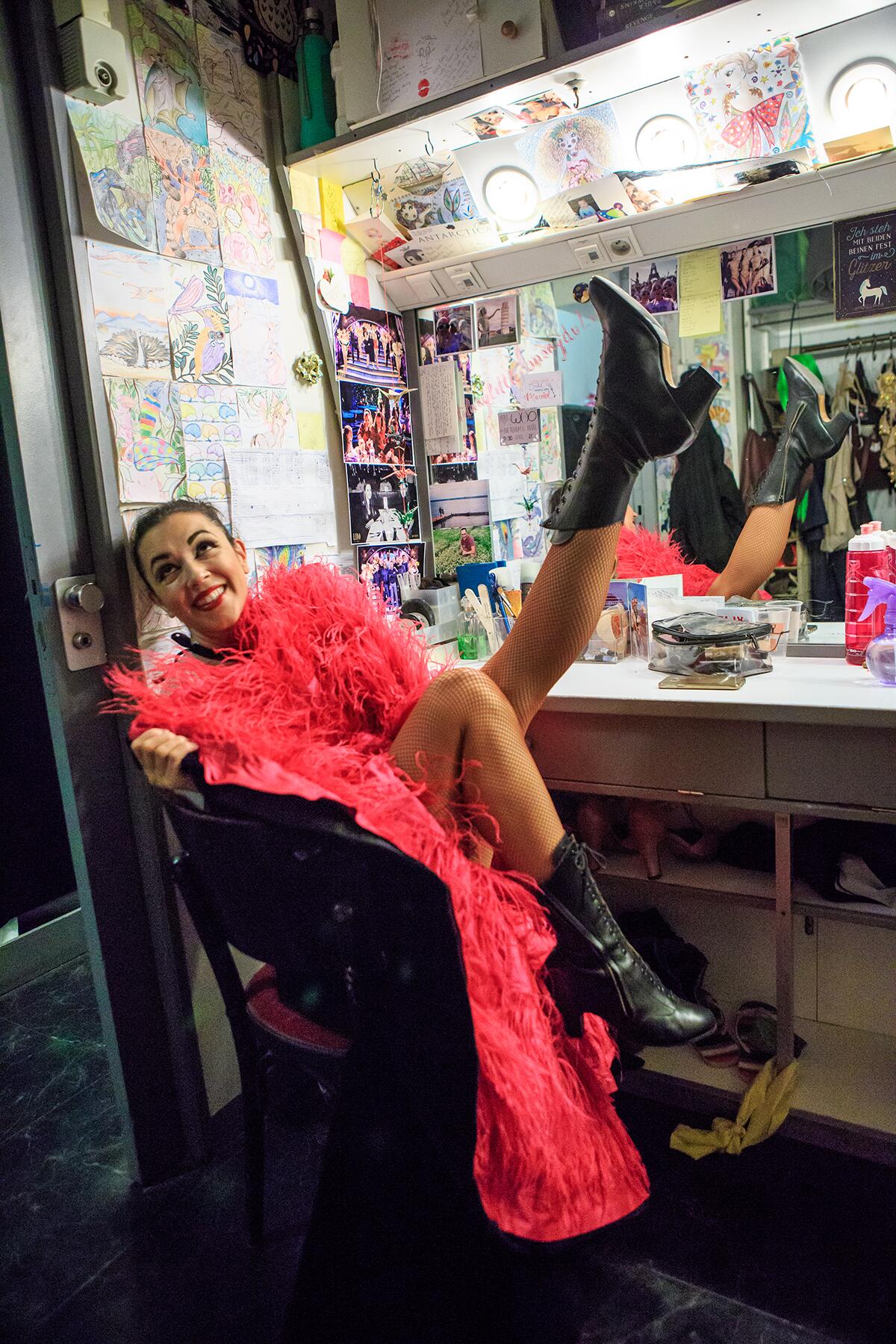 Hillary Sukhonos, showgirl, dance writer, and former cabaret dancer at The Lido believes that the feminist origins of Cancan are still very much alive and kicking. American-born, she’s lived in France for seven years, and faced her fair share of judgment for choosing to be a cabaret dancer. She’s been called a stripper, looked down upon, and been the butt of jokes. In spite of this, she feels that the Cancan is empowering.

“We go to the Louvre and look at paintings of naked women, and we call them art,” argues Hillary. “So why isn’t cabaret considered art in the same way? Many cabaret dancers are highly educated. I’ve met women who run global fashion brands, who’ve majored in physics, who juggle several kids with their careers. Why do we think these women are incapable of making their own choices?”

For Hillary, the problem with cabaret’s reputation is a public relations crisis.

“Campaigns like ‘free the nipple’ get so much backing, but as soon as a woman wants to wear heels and make-up and bare her breasts on stage, it’s seen as anti-feminist,” she says. “We need to get out of the mindset that women who want to wear pretty clothes and feel admired aren’t feminists.”

The Lido may have danced its last, but with the Moulin Rouge alone attracting over 600,000 visitors per year, has Cancan kicked the bucket? Not likely.

The Best Places to See a Cabaret Show in France

France’s original cabaret club is worth the hype. There’s no longer an elephant in the garden, but the Moulin Rouge has lost none of its raucous joie de vivre.

Cabaret isn’t just confined to Paris. L’Ange Bleu, near Bordeaux, serves up a spectacular cabaret show complete with Cancan and a three-course meal.

Built by Gustave Eiffel of Eiffel Tower fame in 1889, Paradis Latin may be one of the oldest cabaret clubs in Paris, but it’s certainly not stuck in the past. It’s known for breaking the rules around traditional cabaret outfits and choreography.

Inspired by the typical American saloon, Crazy Horse is widely regarded as one of Paris’ most avant-garde and exciting cabaret shows.